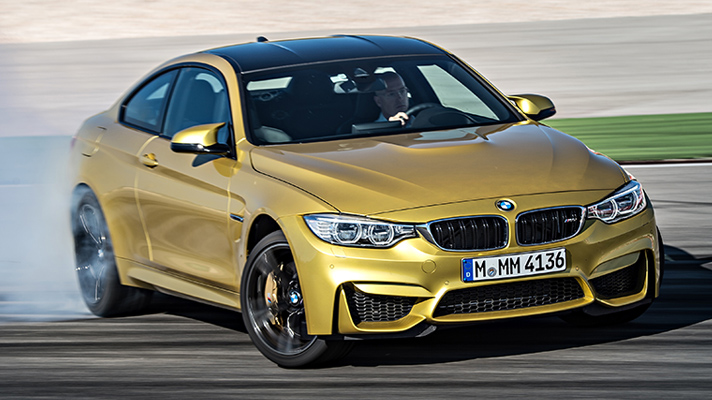 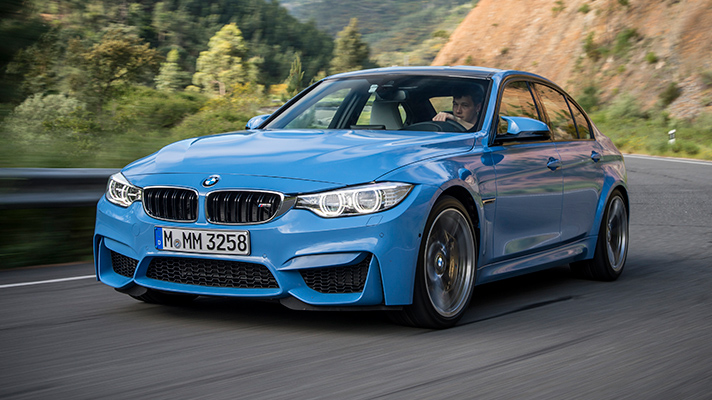 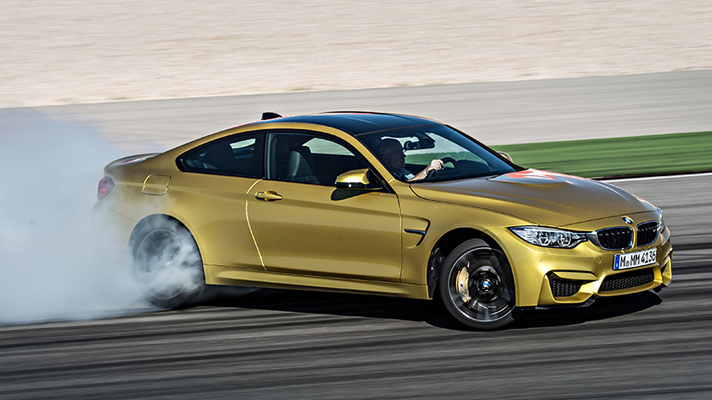 This is the new BMW M3. It’s all present, correct and as you expect apart from the arrival in the engine bay of a pair of turbos.

Yes, and it’s also lost a pair of cylinders. We’re back to a straight six, which enthusiasts will be happy about, but they’re not keen about the turbos. Why? Because while turbos are good for power and torque, they also suffer from lag and mute noise. And if there was one thing previous M3s have been good at, it’s noise and response.

So are you telling me the new M3 fails from the word go?

Not at all. Quite the opposite, in fact. But by adopting turbos the M3’s character has shifted. A good naturally aspirated engine with zingy throttle response and a screaming top end gives any car added zing and spark. Introduce turbos and you’ve got to work around them, because suddenly you’ve got a car that does its best work in the mid-ranges, and so feels lazier.

And is that the case with the M3?

Yes. BMW make much of the fact this 3.0-litre revs to 7,600rpm, but they haven’t given you enough reasons to go there. I had hoped they would save an extra surge of power for the top end, but actually it’s pretty much the same at 5,000rpm as 7,000rpm. Which is the same as at 3,000rpm, too. It’s extremely linear and pulverisingly fast: 425bhp and 405lb ft from 1850-5500rpm in a car that’s now 80kg lighter than before will have that effect. But the engine note doesn’t develop or change as the revs build. It’s kind of tuneful and there’s quite a bit of volume, but you’re aware that it’s not completely natural.

The ECU is clever. Too clever by half. It knows what revs you’re at and what the engine should sound like at those revs, then adds a bit more through the speakers. You can’t tell where the noise is coming from, but you can tell that it’s a bit artificial.

OK, so what about response?

This could be one of the best turbo engines ever. Stick it in Sport Plus mode and it has anti-lag. You know, like a rally car. Well, not actually like a rally car, but in order to make the turbos as responsive as possible when you’re driving quickly, the engine injects a bit of extra petrol into the cylinders when you lift off or brake to keep the combustion process active and the turbo spinning at over 120,000rpm. So when you get back on the throttle, the turbo is already there, delivering (almost) instant boost and response. You do notice the improvement. It’s not quite naturally aspirated, but it’s damn close. And it’s not just that that makes this engine so good.

It’s how the turbos – which are tiny incidentally, about the size of pill bottle tops – never over-react to your inputs. Turbos often get carried away, and keep on blowing after you’ve lifted off, or have inconsistent response at different points in the rev range. These feel very pure – they respond precisely and are immaculately well behaved. Plus they pack a proper punch – 0-62mph takes 4.1 seconds.

And I understand it’s more economical too?

This is the real reason BMW has switched to turbocharging. Opt for the double clutch gearbox and you’ll only emit 194 carbons and travel 34 miles on a gallon. Those figures are a claimed 25 per cent better than before. And torque has climbed 40 per cent. On paper, this thing rocks.

OK, so what about in reality?

It rocks. It would be reasonable to assume that making it twin turbo would just end up with it feeling like a diddy M5, but it hasn’t. Yes, there are similarities in the power delivery, but the M3 still feels energized and exciting. Oh and by the way, all comments apply equally to both the BMW M3 saloon and M4 coupe – BMW has engineered them to drive as identically as possible. Both have the same track widths, even though the standard 4-Series track is 40mm wider than the 3-Series (the M3 is up 80mm. It has stance). BMW has even tweaked the suspension to take account of the extra 23kg the M3 weighs due to its rear doors. Not to make the cars feel different, but to make them feel more the same. Best of all, there’s not much difference in the price – the saloon is £56,175, the coupe just £460 more.

Could you detect a difference?

I thought I could at Portimao racetrack, which is a properly testing circuit with loads of cambered corners, blind crests and elevation changes. I thought the M3 felt a fraction more wayward and lost traction at the back a bit more easily. It could be the slightly more rearward weight distribution, or perhaps the marginally higher centre of gravity due to the higher roofline. Or it could be just me being a self-important chin-scratcher. But it doesn’t really matter because both are a hoot to drive. Let’s not get into actual steering feel as that seems to be a thing of the past now everyone is using some kind of electrical assistance on the racks. The M3 - as long as you avoid either Comfort mode (too much assistance) or Sport Plus (too little) – does a pretty good job in Sport of being accurate, well weighted and giving you confidence in the front end. Which, to be fair, sticks like glue.

So, still not a car that understeers, then?

No, but contrary to some of the pictures above, neither is it a complete sideways monster. Well, not unless you ask it nicely. Most of the time it’s just beautifully balanced, and at the track plays happily in the zone between pushing a bit wide at the front and stepping out a little at the back. It’s all very manageable – and you don’t even have to turn the traction off. MDM mode, which loosens the shackles a bit, is genius and the M3 just moves very well indeed. It’s got great traction, but the turbos hit so hard on the way out of corners that you find yourself short shifting just the manage the power a bit better. But it does get round a difficult circuit very well indeed, aided no end by the optional carbon ceramic brakes – which might just be the single best thing about the car.

The brakes are the best thing about the car? Why?

Because they’re so nice to use on the road – lovely bite and progression, masses of power. Oddly, at the track they weren’t quite so stellar – the ABS chipped in a bit earlier than necessary and the pedal got a bit long even though the brakes didn’t fade. No news on how much they cost yet, but they’re worth it. That’s not the only trick stuff going on under the skin. M division has a lot of autonomy in what it’s allowed to do to the 3-Series to turn it into an M3. Here we have completely bespoke front and rear subframes that are rigid mounted to the car with no bushing in order to deliver the stiffest platform possible for the suspension and drivetrain. Open the bonnet and you’ll spot this curvaceous carbon strut brace that encircles the whole engine, linking chassis to suspension turrets to subframes, locking everything solid. And you can feel the results of that in the car’s poise and agility, it’s turn-in and crispness. Both on road and track. I have one or two issues with the ride quality, which felt rather sudden over sharp expansion joints and broken tarmac, but that’s offset by the car’s relaxed nature when you’re ambling around.

Do you mean it’s easy-going?

It is – especially if you opt for the double clutch DCT gearbox. I’m not completely convinced of its integration, as the shifts hit home a bit hard in max attack mode, but combined with the car’s hushed cabin, it does make the M3 an easy car to do distance in. And you really can get 30mpg from it. The seats are superb, and I’m not sure any company, bar perhaps Volvo, places you better in the car, sites the controls more logically or is ergonomically superior. The cabin feels good. And there’s room in the back and boot. Honestly. If you’re thinking of buying an M5, stop and have a long hard look at the new M3. Or M4 over M6, of course…

What about its more natural rivals, the Mercedes C63 AMG and Audi RS4?

The C63 is wonderful – a genuinely exuberant car, but I don’t think it’s as well rounded as the BMW. It’s a little more wayward, which can be fun, but also intimidating. It has charisma to spare, though. I love it, but I think I’d have an M3 over it. The latest RS4 isn’t as good as the previous generation – it’s a bit leaden, although it can tuck itself down a road quickly enough. I’d have that third.

So overall the M3 is still up to scratch?

It is, although it’s also a different car. It’s not as fiery now, not as raw and frantic. You’ll end up surfing the mid-range on the exits of corners because it’s more than enough. You might end up driving everywhere a gear higher, because it feels right. This is a shame – some of the naturally aspirated M3’s purity and hardness has undoubtedly been lost. You don’t have to interact with the car as closely or know it as intimately as you did with the old one. But things are going this way, and the trade off is 30mpg, cheaper tax and passengers that won’t moan about the racket. I think BMW has judged it about right. The chassis is peachy, the engine wonderfully potent – it’s a winning combination.