Chris Evans: Top Gear is ‘the most challenging thing I’ve ever done’

New presenter talks first cars, Ferraris and the future of TG in the August issue of Top Gear magazine 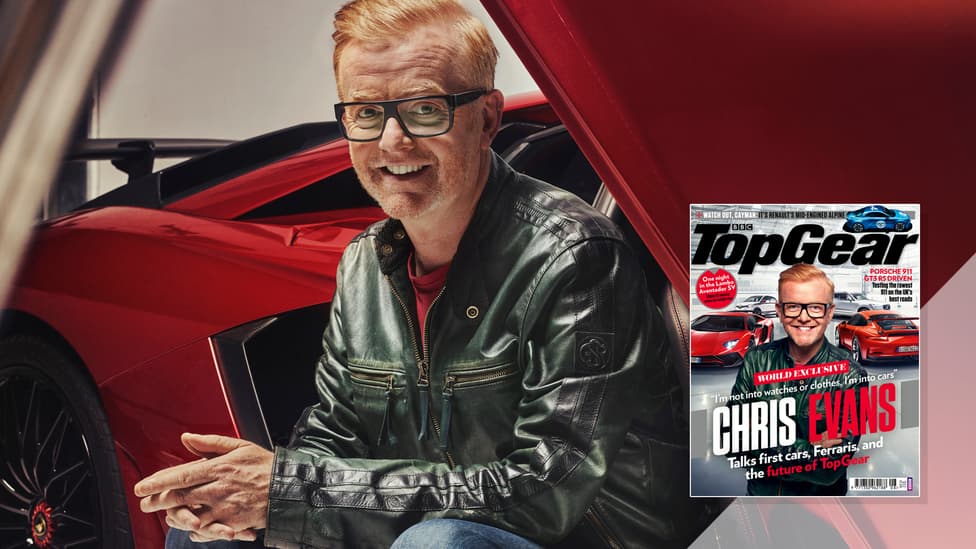 “I’m not into watches or clothes. I’m into cars…”

So says Chris Evans in the August issue of Top Gear magazine [on sale July 16], in which the new TG host pours forth on the subjects of first cars, Ferraris, the future of the telly show, and a whole lot more besides.

In an exclusive, wide-ranging interview, Evans describes taking the Top Gear job as “the most challenging thing I have ever done in my career,” and admits that he’s fully aware of the media spotlight on his appointment.

“It’s impossible to ignore [the attention], and you’d be foolish to, because you have to accept everything,” says Evans. “It’s like the serenity prayer, 'Change the things you can change, accept the things you can’t, have the wisdom to know the difference.'"

Evans also admits he was surprised to ‘get the phone call’ asking him to host Top Gear, especially after – in his own words – saying he ‘wouldn’t run for office’.

“I honestly didn’t think I would get the phone call. I was amazed that I did. I ruled myself out, because I didn’t want to be part of all the nonsense that was going on,” he says. “But then the situation changed, and I wasn’t stepping on anybody’s graves or toes.

“[But] if I make television programmes for a living, and love motor cars, and love the biggest challenge in the world, why wouldn’t I do it?”

Evans also confirmed that the international search for Top Gear talent is ‘no gimmick’, and that it won't result in the team ‘employing a person for the sake of it’.

“It can’t be [a gimmick],” he says, “because, first of all, I do not have time in my life for gimmicks anymore, and TopGear doesn’t need gimmicks. There are amazing people doing stuff in their bedrooms or in their garages. We’d be stupid not to find those people. You don’t know who you’re gonna find. You might find no one."

Discussing the future of TopGear, Evans vowed ‘not to throw the baby out with the bath water’, but that he wouldn’t slavishly copy its existing format.

“Having watched the show over the years, I have my memories. I’ve had to put those on hold, because we have to start from where we want to start…”

And what of the wider world of cars? Well, despite his notorious passion for Ferraris – and admitting to losing $7m on a 250 GT Spyder – Evans also admits to being a sucker for British cars, old and new.

“The second car I [ever] bought was an MGB roadster, which I couldn’t afford,” he remembers. “I was a mobile DJ at the time, and had massive speakers. Every other DJ had a van, but I didn’t. So I used to take six trips to go to pubs, taking one speaker at a time. It didn’t matter, because I got to drive my car with the roof down, so I didn’t care…”

For the full interview, make sure to pick up the August issue of Top Gear magazine, on sale Wednesday July 15.

Or never miss an issue with one of these great offers:

Subscribe to TopGear magazine now and get your first 5 issues for £5! Continue and save 30% on the shop price. Click here to take advantage

Download the interactive August issue on iPad and iPhone to get videos of the Ferrari 488 GTB and Porsche 911 GT3 RS, plus loads of extra images. Click here to download it

Print edition also available on all Android devices. Click here for your copy