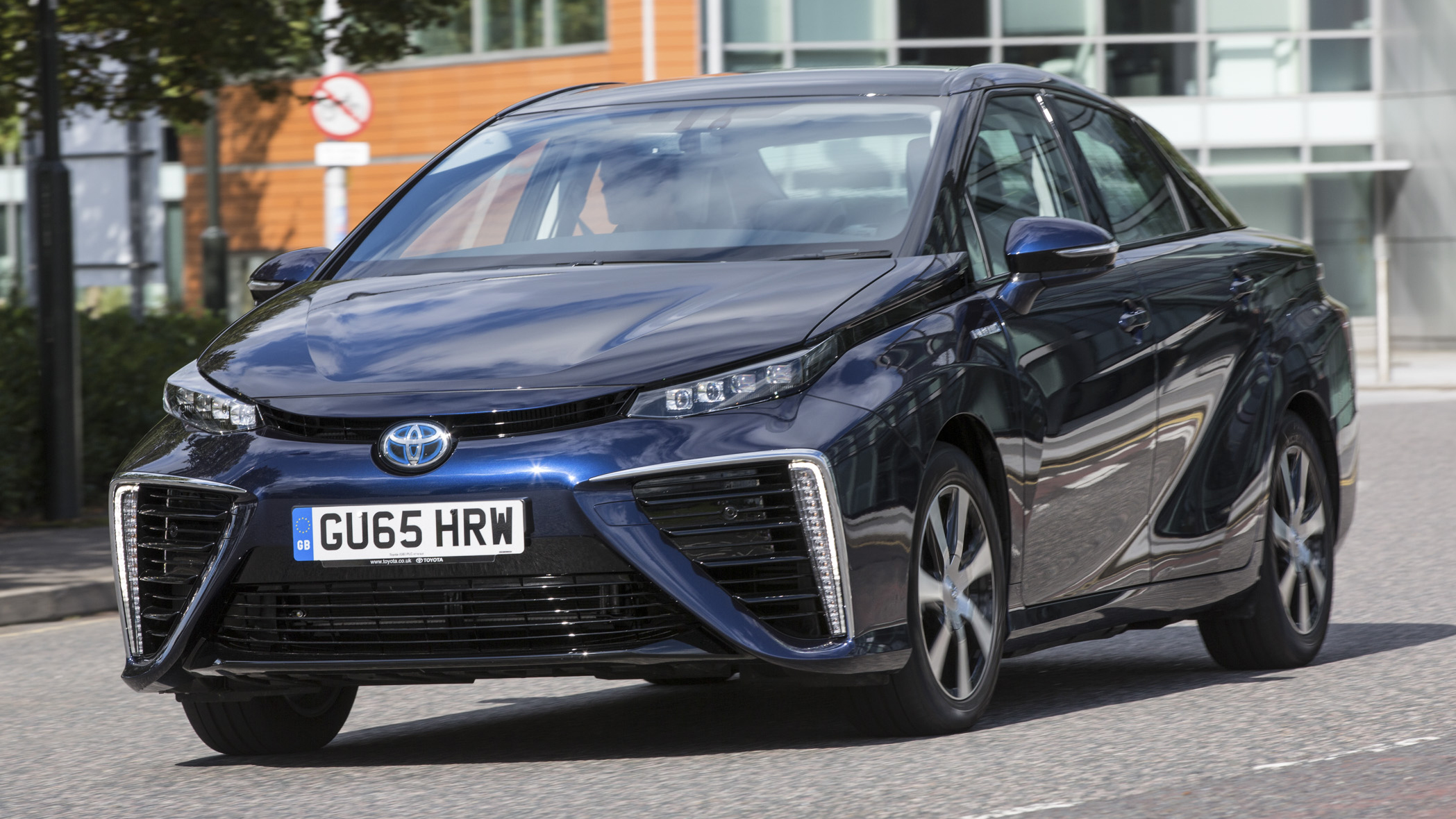 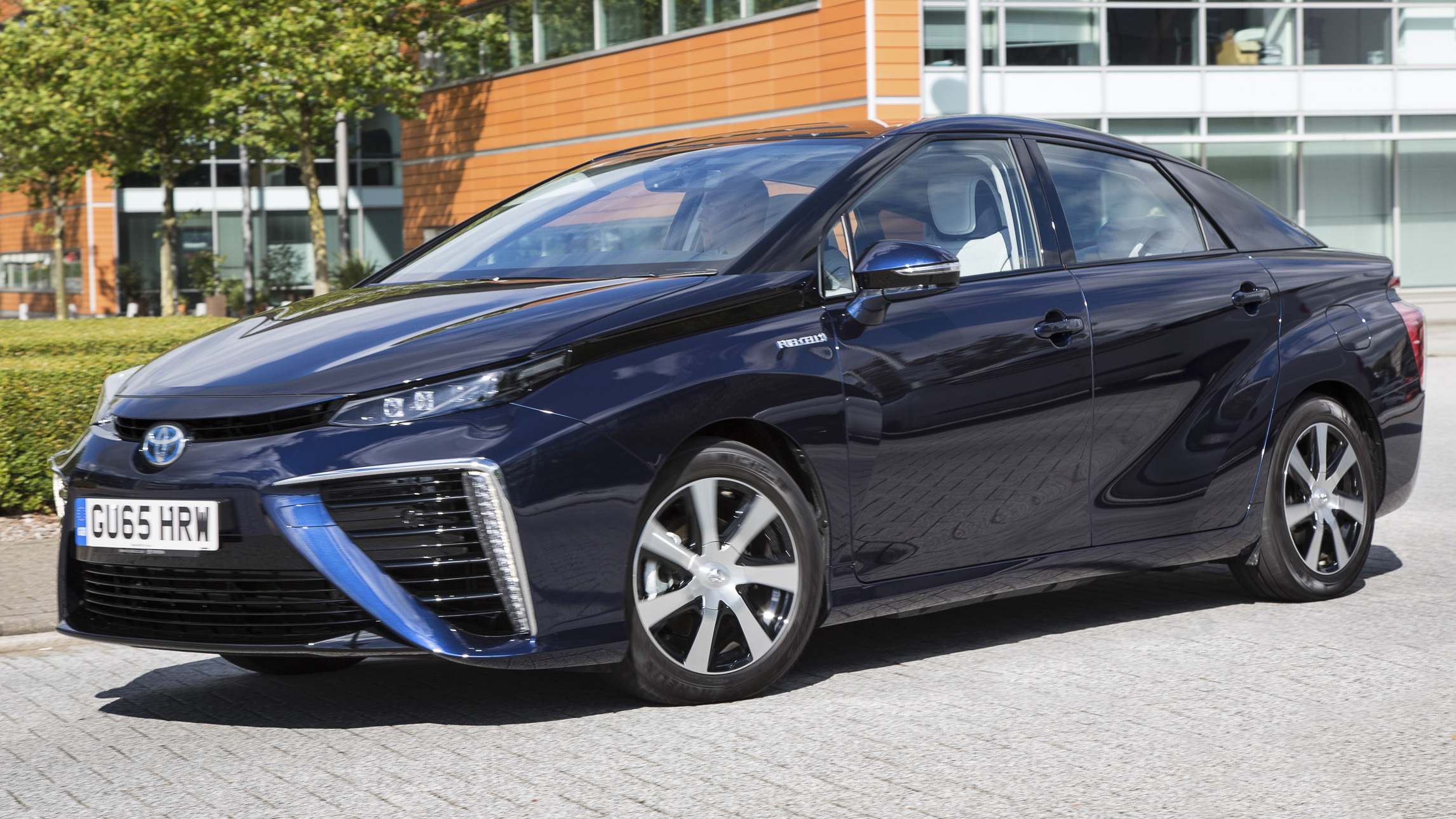 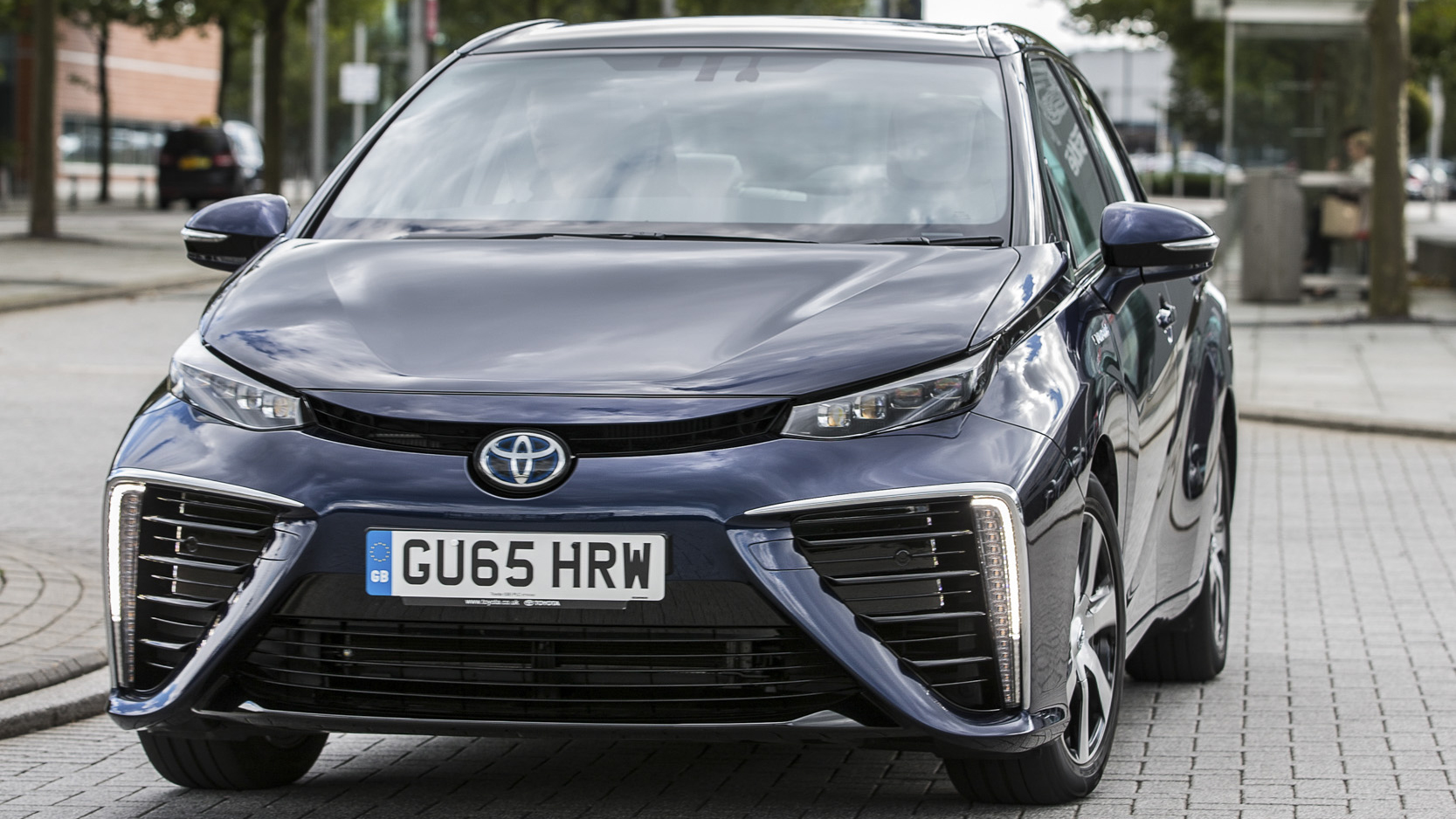 We have the future. No really: the word ‘Mirai’ translates as ‘future’ in Japanese. A fully-fledged production car propelled by the world’s most advanced fuel cell, it represents a huge leap of faith from Toyota, who plans to sell only 100 Mirais a year in Europe.

But it’s about the bigger picture. This is the world’s largest car manufacturer jump-starting a zero-emissions, hydrogen energy-based society by offering a car that’s normal in every way, but simply runs on a different fuel. Put compressed hydrogen in one end and water comes out the other, and all the while it drives like a properly resolved electric car.

To buy a Mirai, though, you’ll need to be a Silicon Valley millionaire or a die-hard early adopter given its £66,000 price tag. Toyota is trying to soften the blow – it has applied (decision pending) to have £15,000 knocked off that by the Government’s HyFive grant.

Alternatively you can lease one for £750 a month, which include servicing, tyres and all the hydrogen your car can inhale. If you can find anywhere to fill it up that is…

I haven’t spotted a hydrogen nozzle at my local garage…

That’s because there isn’t one, yet. There are currently just three filling stations in the UK capable of delivering hydrogen at the required 700bar of pressure - in Heathrow, Hendon and Swindon. By early 2016 there will be three more (two in the London area, another in Sheffield) and in the next 18 months a total of 16 dotted around. The long-term goal is 65 by 2020.

Where fuel cell cars have pure EVs licked is in topping up, or ‘recharging’, the twin carbon-fibre tanks – it takes just three minutes to pump in 5kg of H2, whereas today’s batteries take hours to recharge. We had a go at refuelling at one of Hamburg’s filling stations and the process was familiar to the point of being dull, but quick, clean and stress-free.

The real question is where you get your hydrogen from – it can be produced from reformed oil, gas or biomass, but the preferred method is extracting it from water using electrolysis. If the electricity used for that is from a renewable source then, finally, we’re talking about a truly zero-emissions car.

In each of the cells that make up the fuel cell stack, pressurised hydrogen (H2) is delivered to a negative electrode. This releases electrons that flow to the positive electrode where it meets oxygen (O2) from the atmosphere to form water (H20) that drips out of the tailpipe - seven litres of the stuff for every 100km you drive. It’s this movement of electrons from one electrode to the other that produces the electricity, used to drive a front mounted 152bhp electric motor.

Excess energy from regenerative braking and the fuel stack is stored in a battery behind the rear seats, and deployed when the motor needs an extra boost. Basically it feels, sounds and drives like an electric car, but you have a mini power station producing the electricity on board. 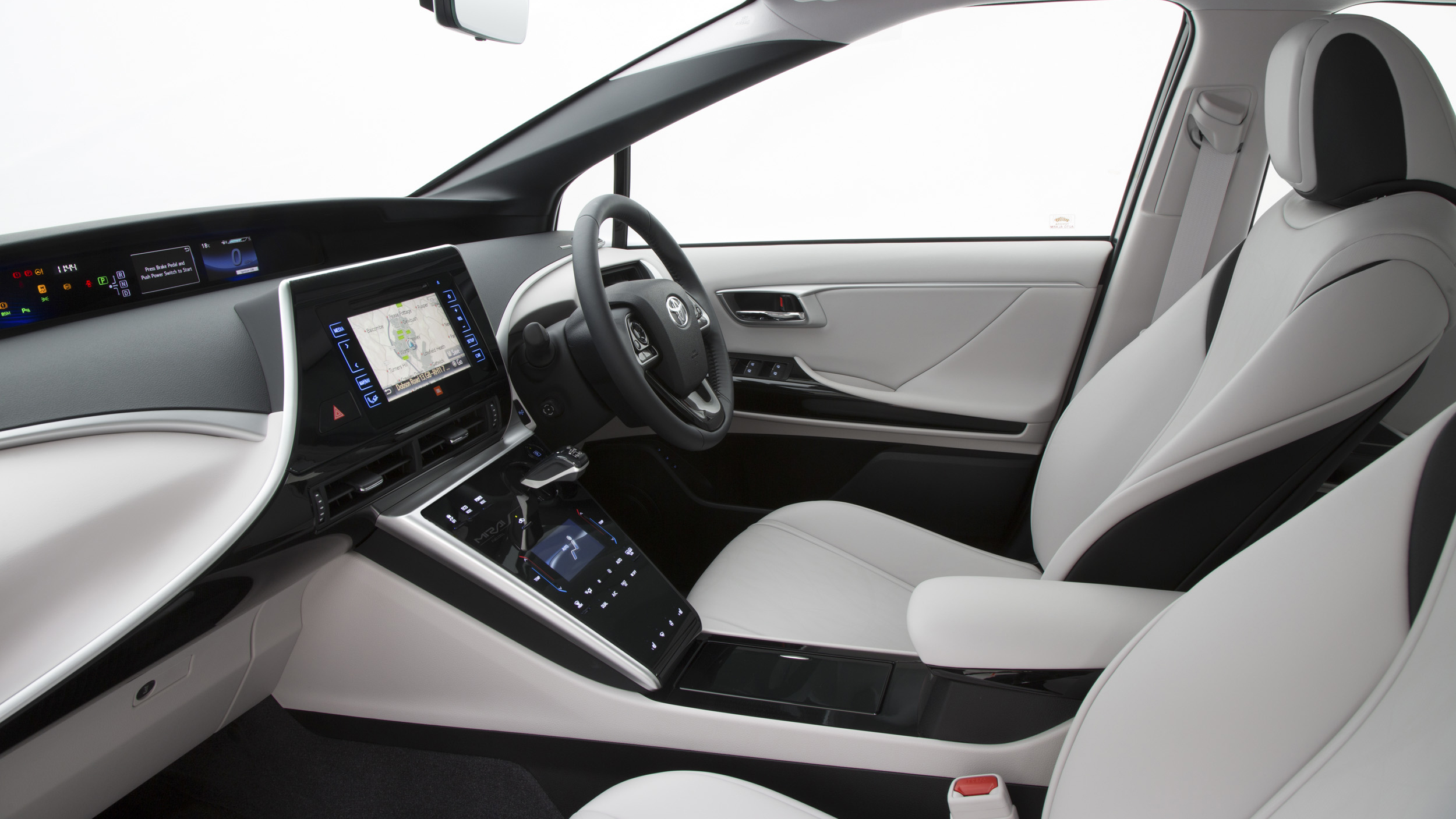 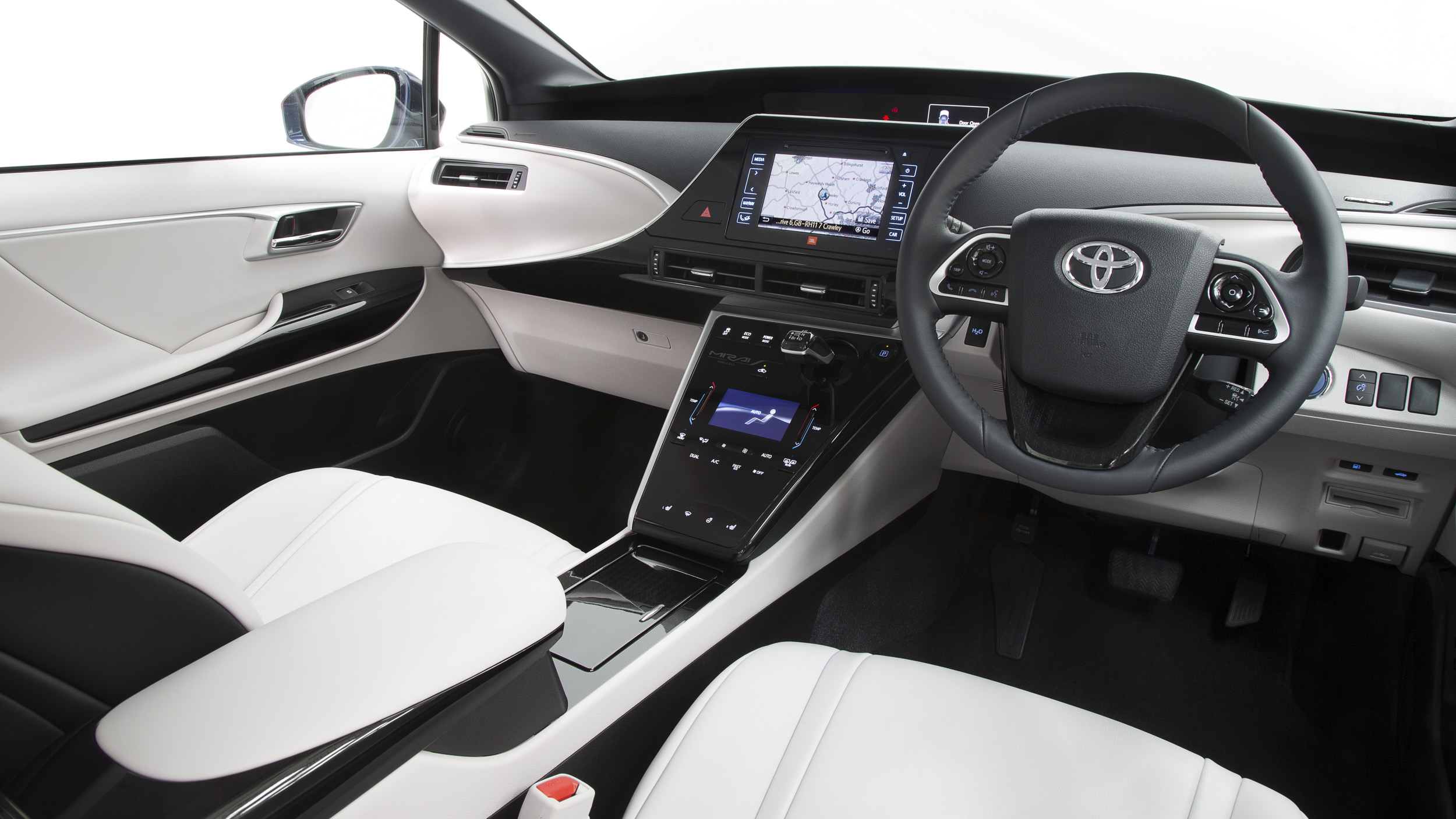 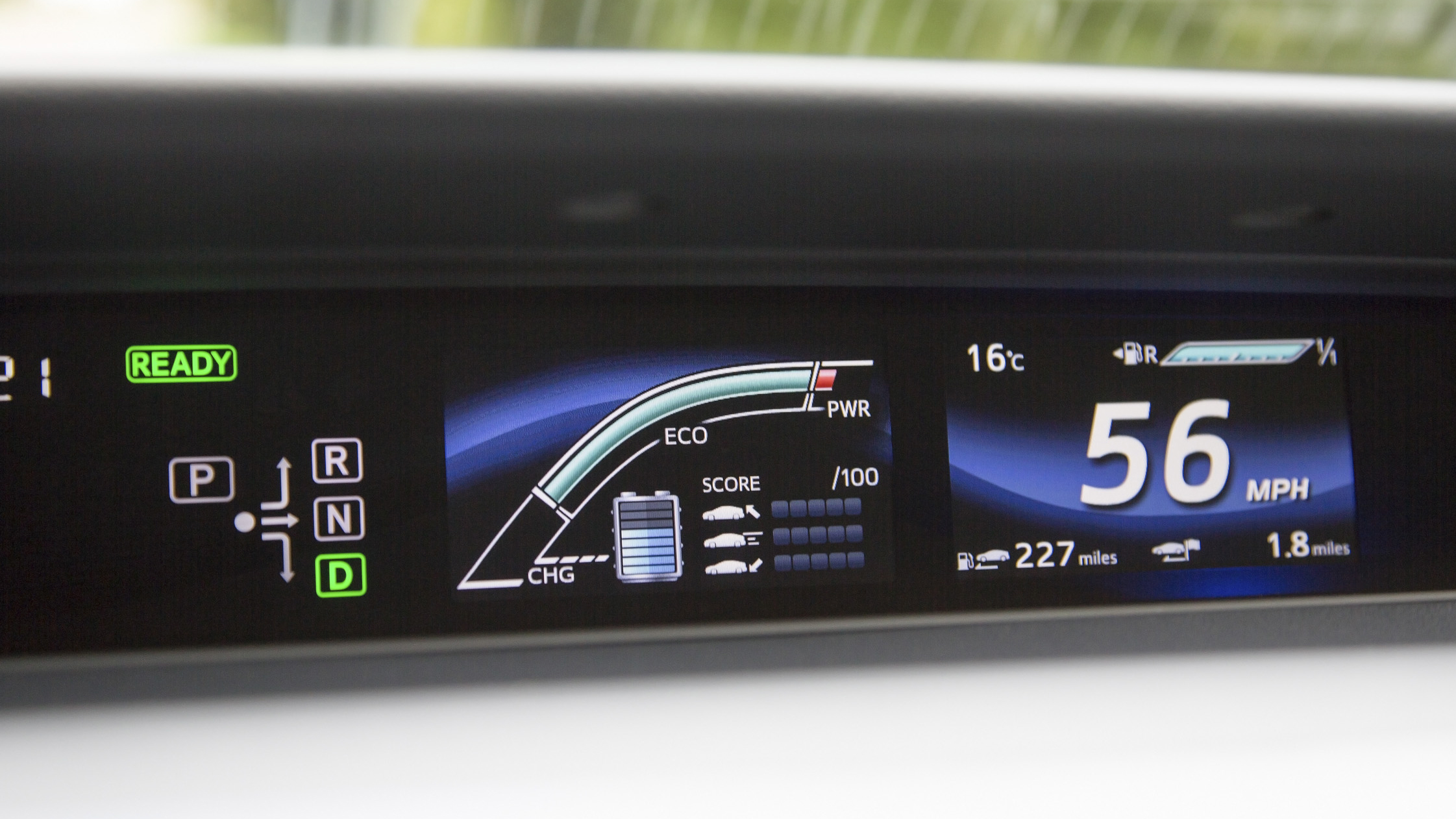 So it’s slow and heavy then?

Heavy, yes – it weighs in at 1,850kg – but slow? Not at all. Thanks to 247lb ft of torque from zero rpm, the Mirai picks up instantly and feel positively sprightly whenever you tread on the gas. A 0-62mph time of 9.6 seconds and a top speed is 111mph isn’t too shabby at all.

A single ratio gearbox, instead of the Prius’s infuriating CVT, means acceleration is perfectly linear and accompanied by a sound I can only describe as, um, someone hoovering downstairs while you’re up in your bedroom. On top of the default driving mode, ‘Eco’ numbs performance to save fuel, and ‘Power’ sharpens the throttle if you’re in the mood for understeer.

Skinny eco-tyres and a portly kerbweight mean the Mirai isn’t the car to go chasing lap times in, but lock up your inner Stig, keep things tidy and it’s a swift way to get around in total comfort and virtual silence, even at 80mph.

Put it this way: Uber drivers, and passengers, of the future will love it.

Tell me about the, erm, distinctive styling…

OK, so it’s not what you’d call svelte, but you’re not going to miss a Mirai whirring past on the high street. The dimensions are roughly aligned with a VW Passat, so despite the battery pack and power control unit squashed between the rear seats and the boot, there’s still a handy 361 litres back there for your odds and ends.

In terms of interior space, the Mirai is about on a par with the Jaguar XE – enough space for two adults in the back, but head and legroom isn’t overly generous, so prepare for lanky friends to complain.

Up front it’s a great piece of design, striking just the right balance between a futuristic screen-fest and genuine usability. There’s a display set deep into the dash that relays where the energy is flowing at any given time, a central screen for the sat-nav and infotainment and a third just below the gearlever dedicated to the climate control.

The interface is all touch-sensitive gloss black panels, there’s chunky metal trim everywhere, and large sections of the dash are trimmed in the same soft leather as the seats. It’s the most premium feeling Toyota we’ve ever been in, and because you’re paying through the nose there’s only one lofty trim level that comes with everything thrown in – wireless phone charging point in the armrest included.

But isn’t this another Hindenburg disaster waiting to happen?

No. Toyota is acutely aware of a possibly outdated perception that hydrogen tank equals bomb, and has over-engineered the solution. The carbon-fibre tanks are lined in plastic and wrapped in a glass-fibre shell that shows any crash damage clearly.

In the event of a leak, sensors will shut down the fuel system and car itself, plus the tanks are completely sealed from the passenger compartment, letting the gas disperse harmlessly into the atmosphere. Planning to take your Mirai to a warzone? Great news! Toyota has even shot the tanks with high velocity rifles, and they didn’t explode.

If you’re a well-heeled, tech-savvy individual that lives in Hendon, Heathrow or Swindon, why not? For the rest of us, it’ll be a wait until more fuelling stations are rolled out.

What the Mirai does prove, though, is that although expensive, fuel cell technology works and, as a driving experience at least, it’s ready to enter the mainstream. Hats off to Toyota for taking the plunge.