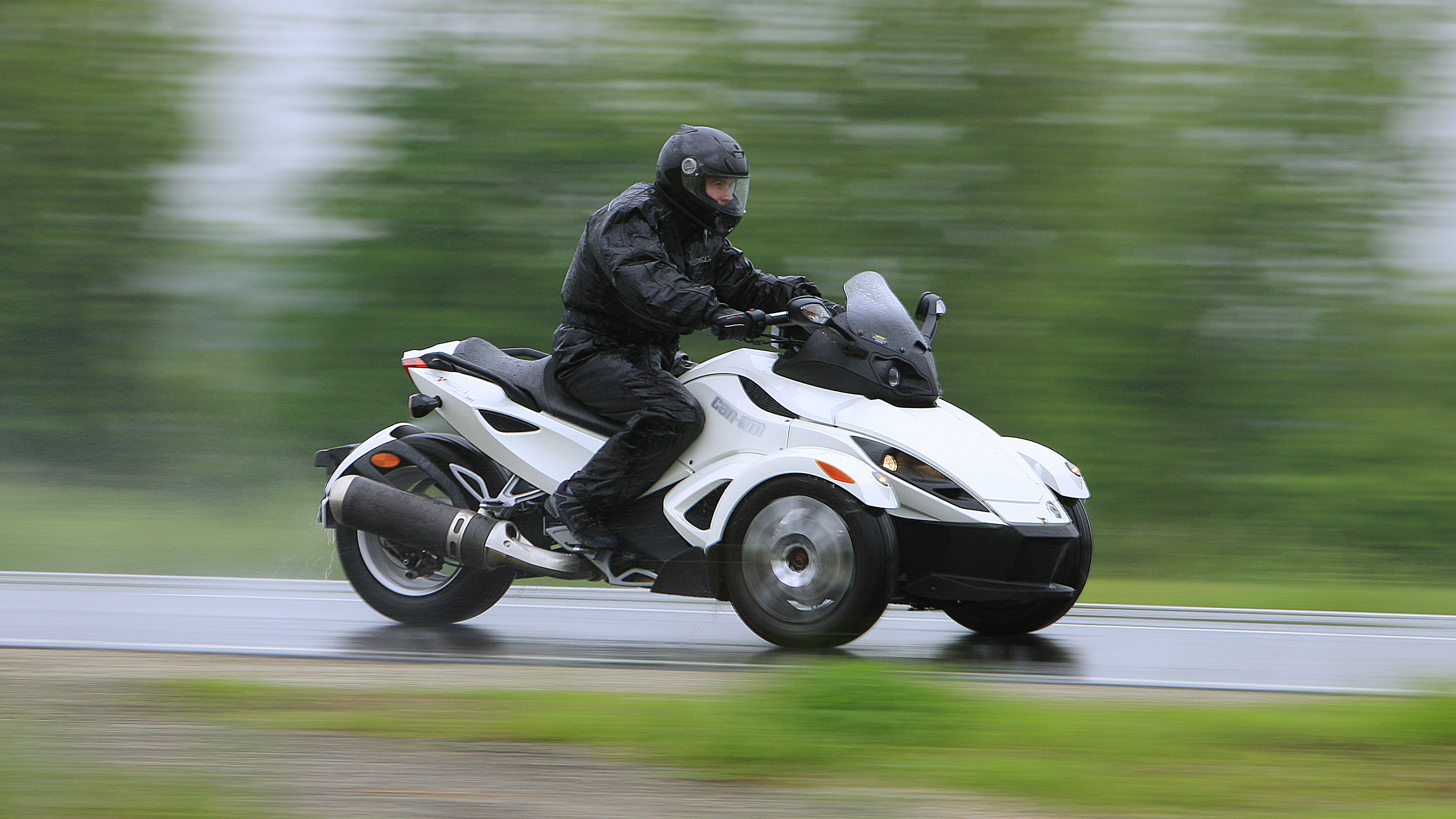 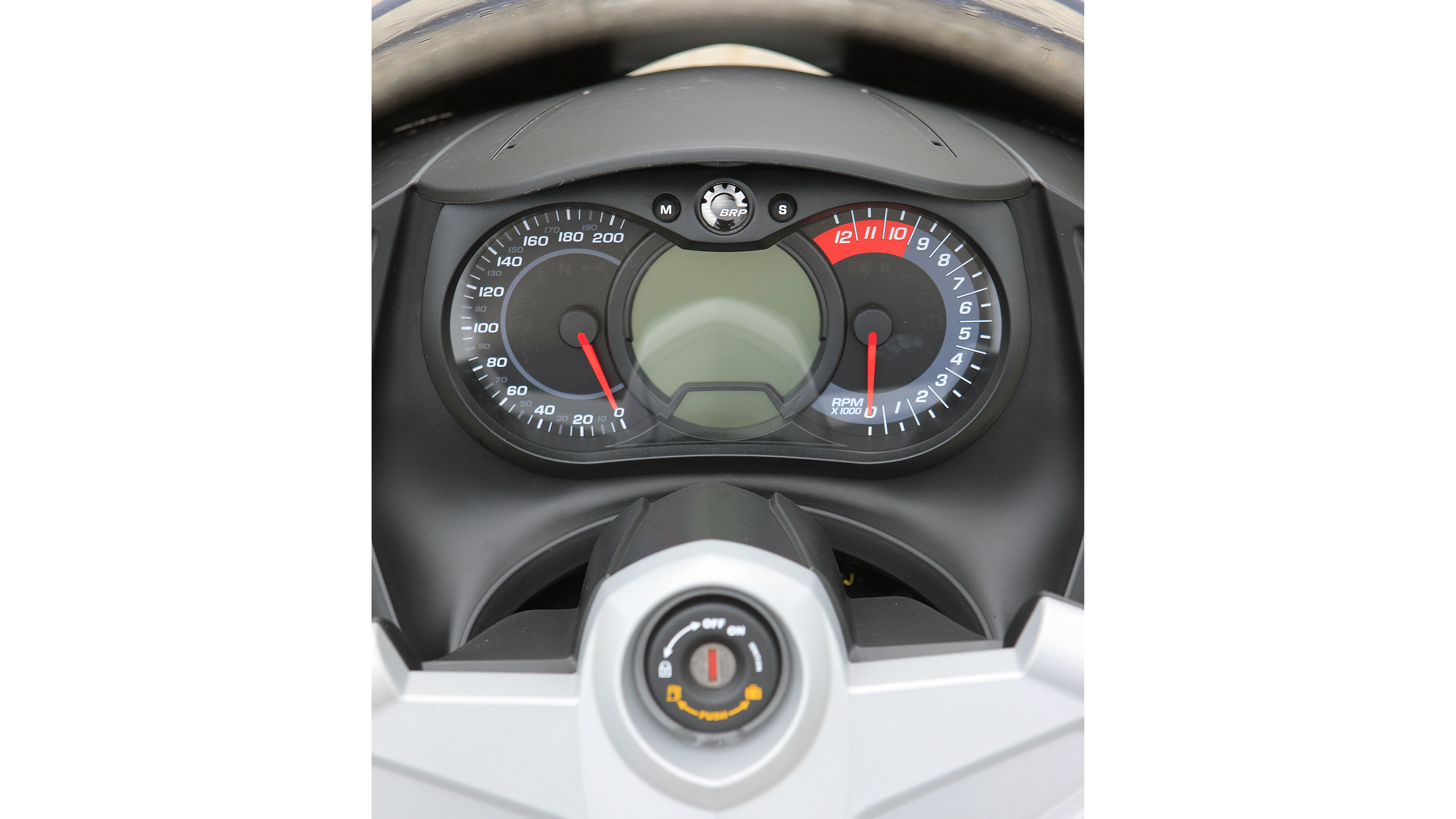 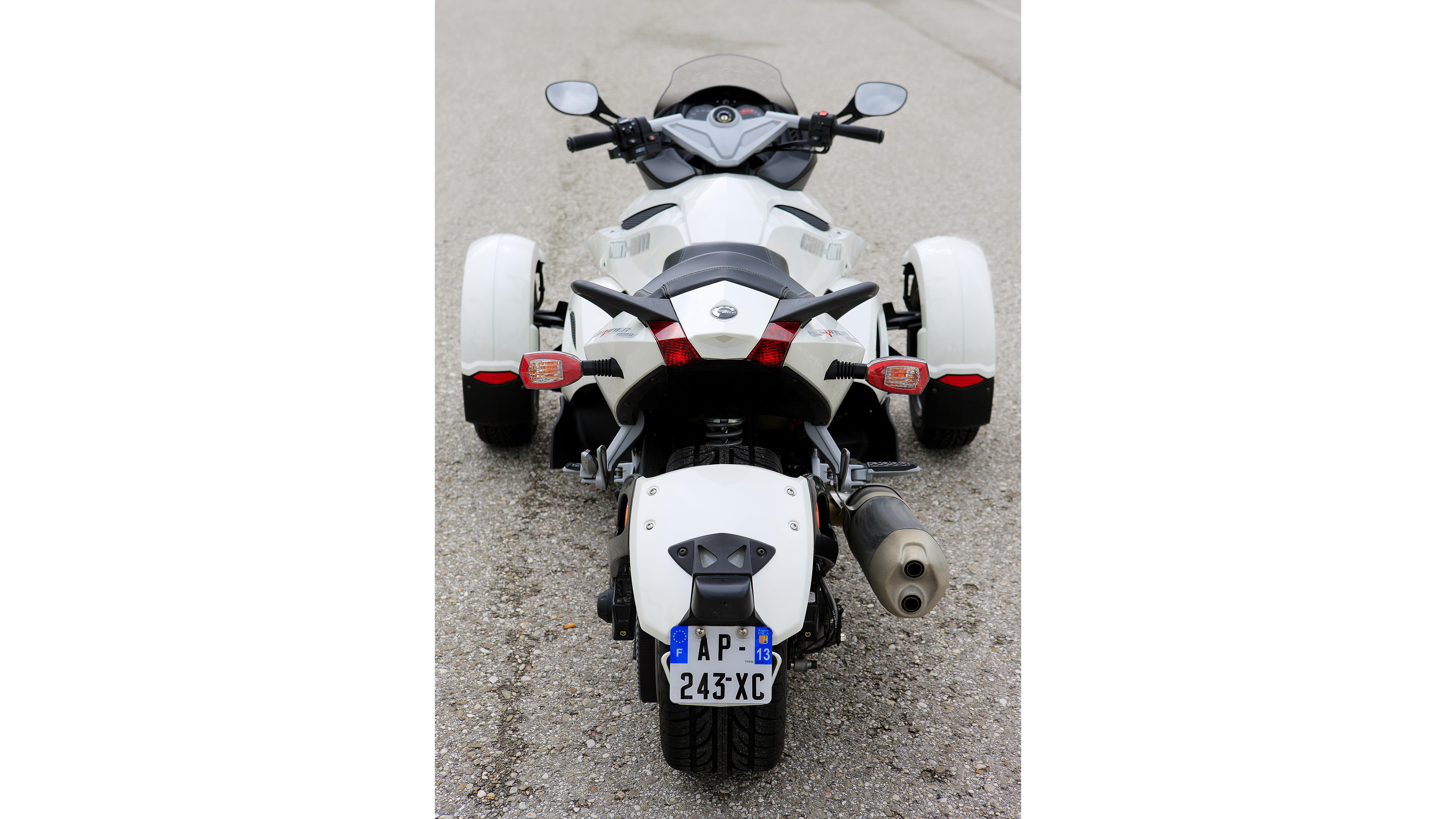 It’s a bit of a weirdo, the Spyder. What we have here is a part-car-part-bike mutant that actually looks like a snowmobile on wheels, which it sort of is. BRP – the company behind it – made the world’s first Ski-Doo in 1959, and the Spyder shares the same Y-shaped footprint as its snowy relative. But whatever it is, it can be ridden (or is it driven?) with a regular driving licence, so there’s no need to wobble around earning a bikist certificate before swinging a leg over.

And to confuse things, it feels exactly like sitting on a quad bike. The view forward is of handlebars and two wheels, with skeletal wishbones exposed, and when you rock from side to side you can see the springs squeeze up and down. But glance backwards and things feel more bike-ish. There’s a single rear wheel and room for one passenger, who will be getting to know you in a fairly intimate way. Choose your pillion wisely...

Power comes from a 990cc motorcycle engine. A particularly meaty one that sounds like a Corvette GT1 racer might through earmuffs. It redlines at 9,500rpm and sends 106bhp to the back wheel via a belt drive. That’s an average amount of power by bike standards, but enough to get to 60mph in 4.5 seconds. You can choose from a motorcycle-style clutch with foot-operated gearshift, or a press-button auto for the less ambidextrous. Bike rookies are better off with the latter, which shifts gears like a flappy-paddled car. 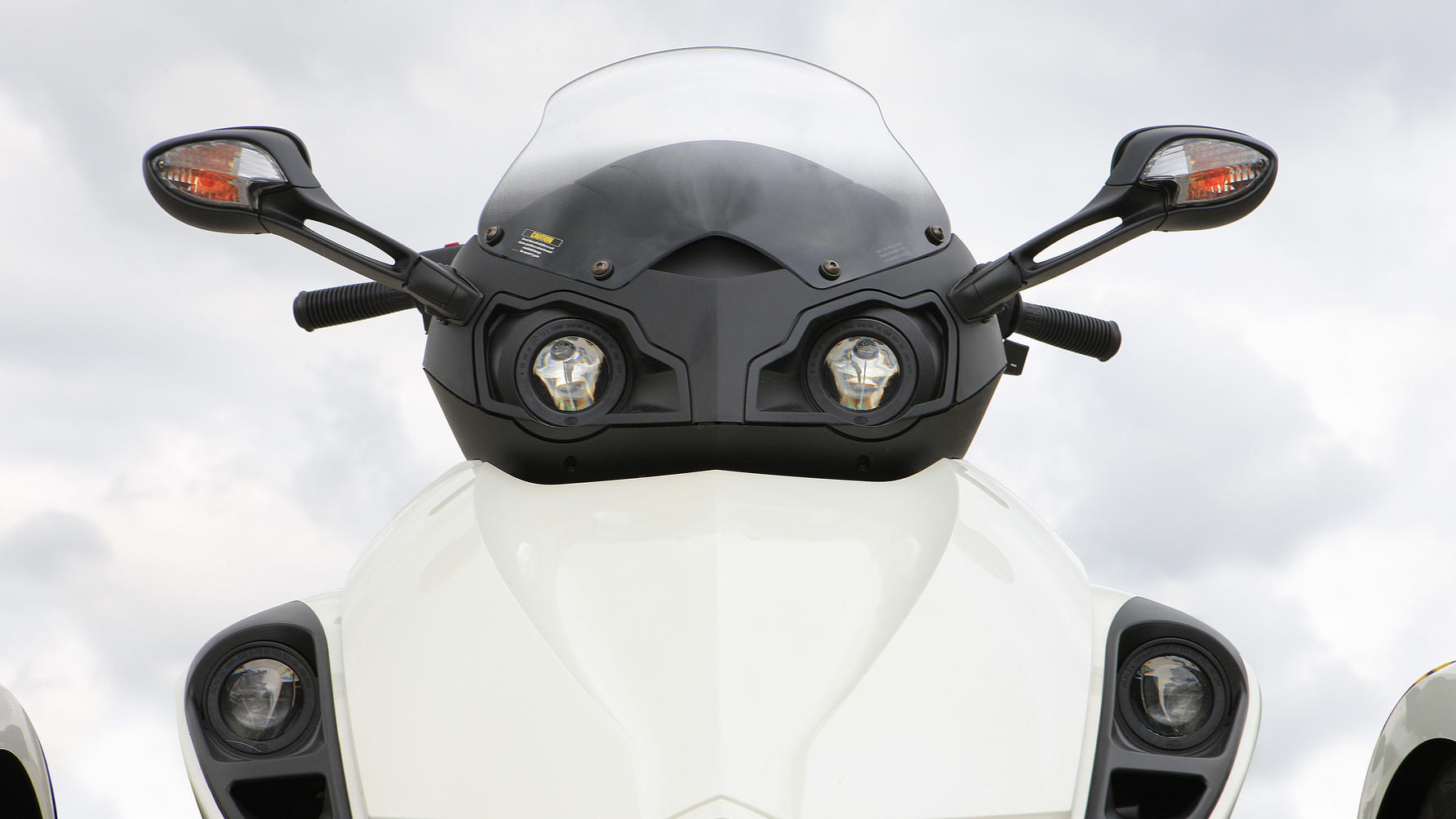 Under the buglike body there’s a whole load of safety stuff, including stability control with yaw sensors that monitor slippage and squirminess, and work with the ABS brakes to cut or add power when necessary. So it will let you spin up the back wheel, then tidy things up if you get too exuberant.

This reassures me as I ride into a monsoon, feeling exuberant. At first the Spyder feels edgy, ferreting around the road rather than smoothing over it. Maybe it’s because the wheels and suspension are exposed – seeing them move somehow exaggerates the movement. I fidget across the seat, and back again, then to the other side, but it doesn’t help. After a while you realise that it won’t buck you off and you’re better off suckering yourself to the saddle.

Things are just as weird through a corner. Turn the handlebars and the front wheels twitch immediately, with no pause between the input and the reaction. If you’re turning left you’re supposed to lean right, to the outside of the machine, which feels totally wrong and adds to the sense of imminent departure. But even in the wet it grips hard, clinging to the corner while you cling to it.

And it’s fast. Twisting the throttle unleashes a flurry of windrush and fly splats before it’s time to brake, using the pedal under your right foot. Nothing unusual about that, but unlike the one in a car, this pedal requires a toe-poke rather than a firm press with your sole. Not sure about you, but my right toe isn’t the burliest part of my anatomy, and using it to bring 317kg-plus-rider to a halt brings fear to the eyes. 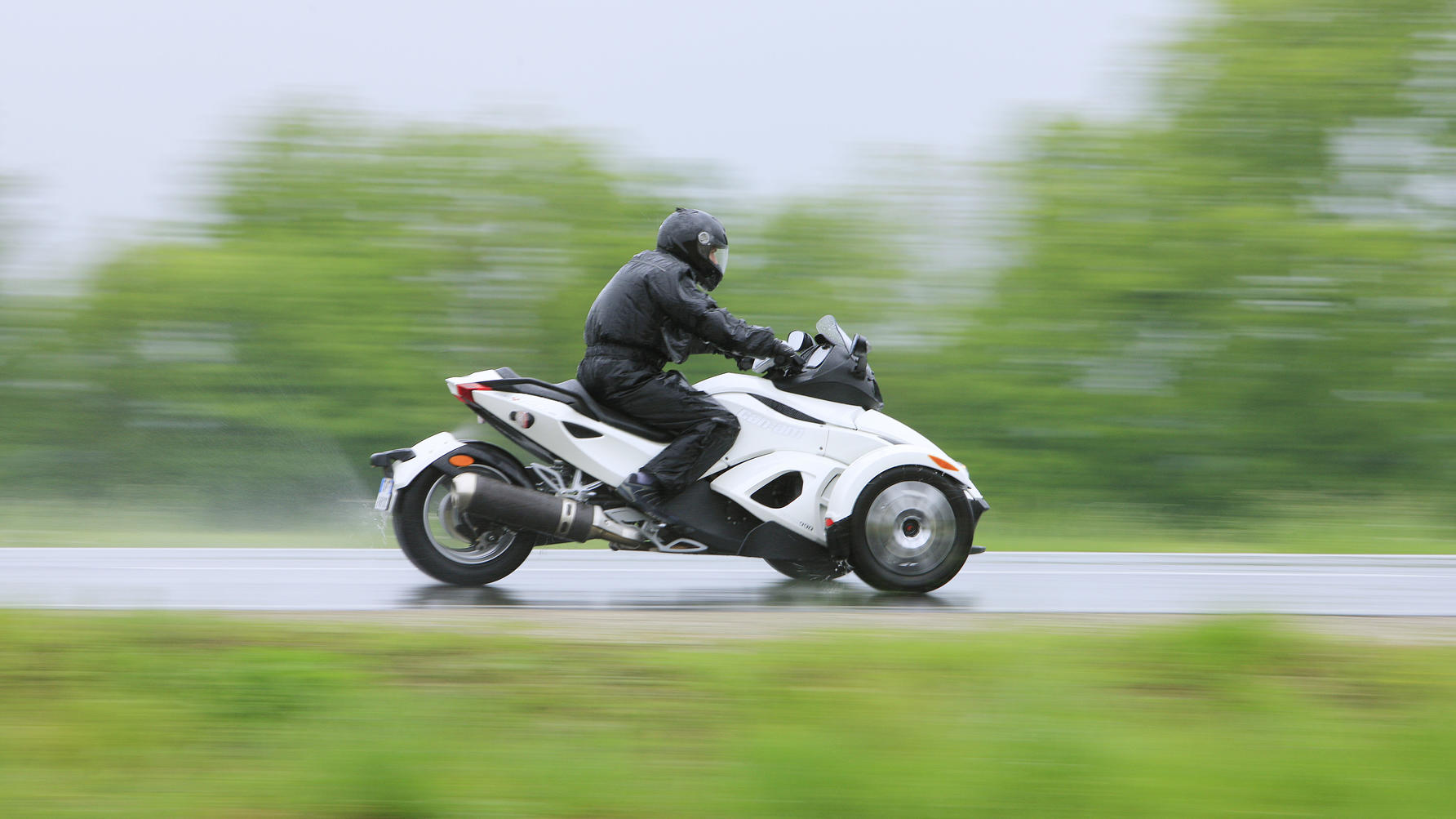 Then there’s the reaction it gets. Cameras click, kids give gestures of maximum respect and cabbies lean from windows enquiring as to what the hell it is. So you shout through your helmet, and shout again at the next guy, until you get bored of shouting and tap the graphics on the fuel tank, staring Stig-like at their excited faces.

This happens a lot in traffic. And because it’s too wide to thread between cars, you won’t be able to escape the inquisition. That’s the thing with the Spyder – it has all of the disadvantages of a bike and none of the advantages of a car. You’ll get soggy and worry about helmet hair, without the compensation of a roof or a glovebox for your jelly babies.

But that’s missing the point. This is a plaything that probably won’t be used every day. It’s a toy for anyone who’s never grown up. Or anyone who’s too nervous for two wheels. Or, frankly, anyone who wants a giggle. If you don’t take it too seriously, the Spyder delivers huge fun. And it does so in floods.

Verdict: crazy mutant is weird to look at and weird to ride. It’s a quick, curious and massively entertaining plaything. Love it.