Read why you can trust our independent reviews
Greg Potts
Published: 28 Oct 2022
comments
Skip 10 photos in the image carousel and continue reading 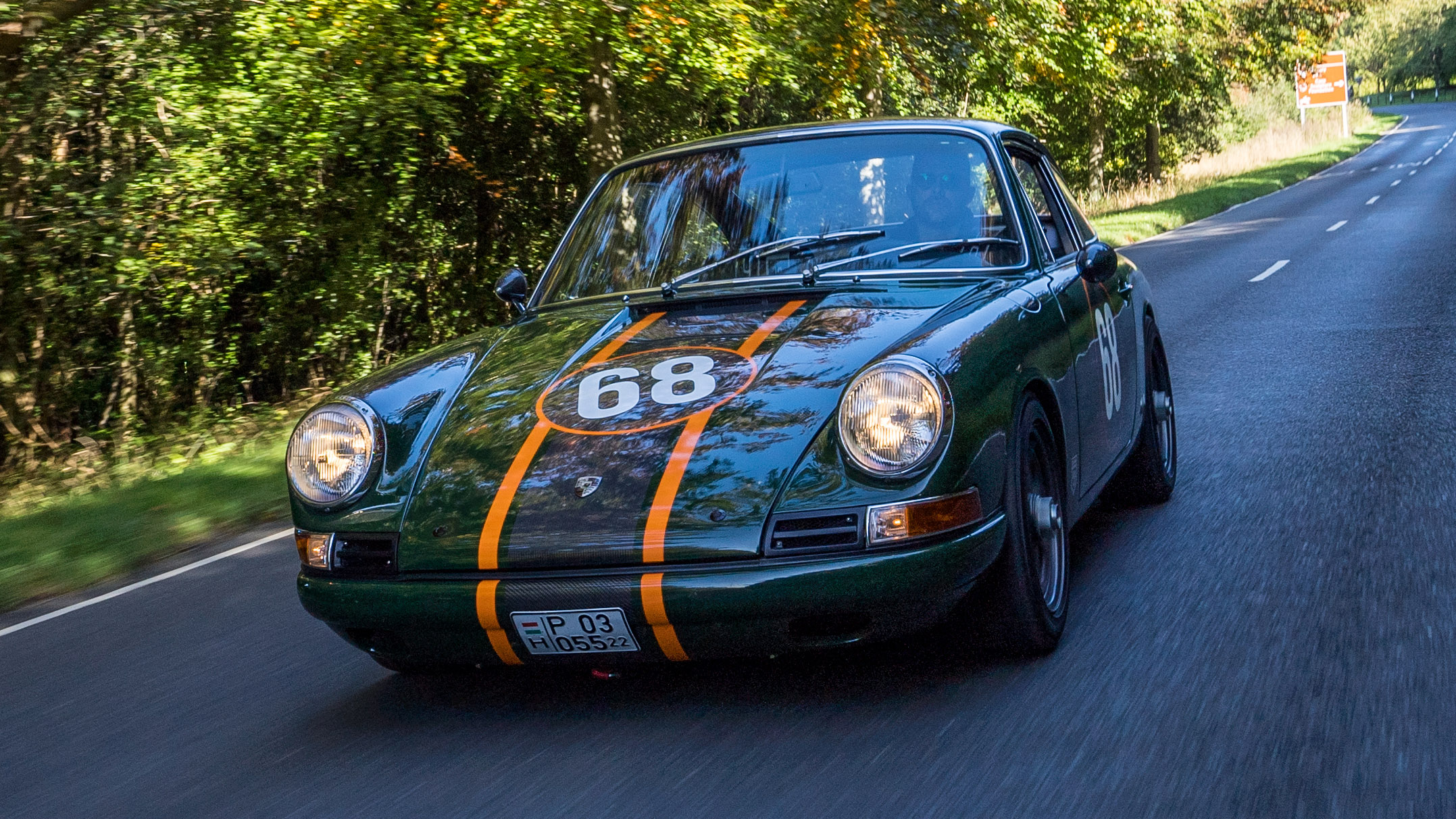 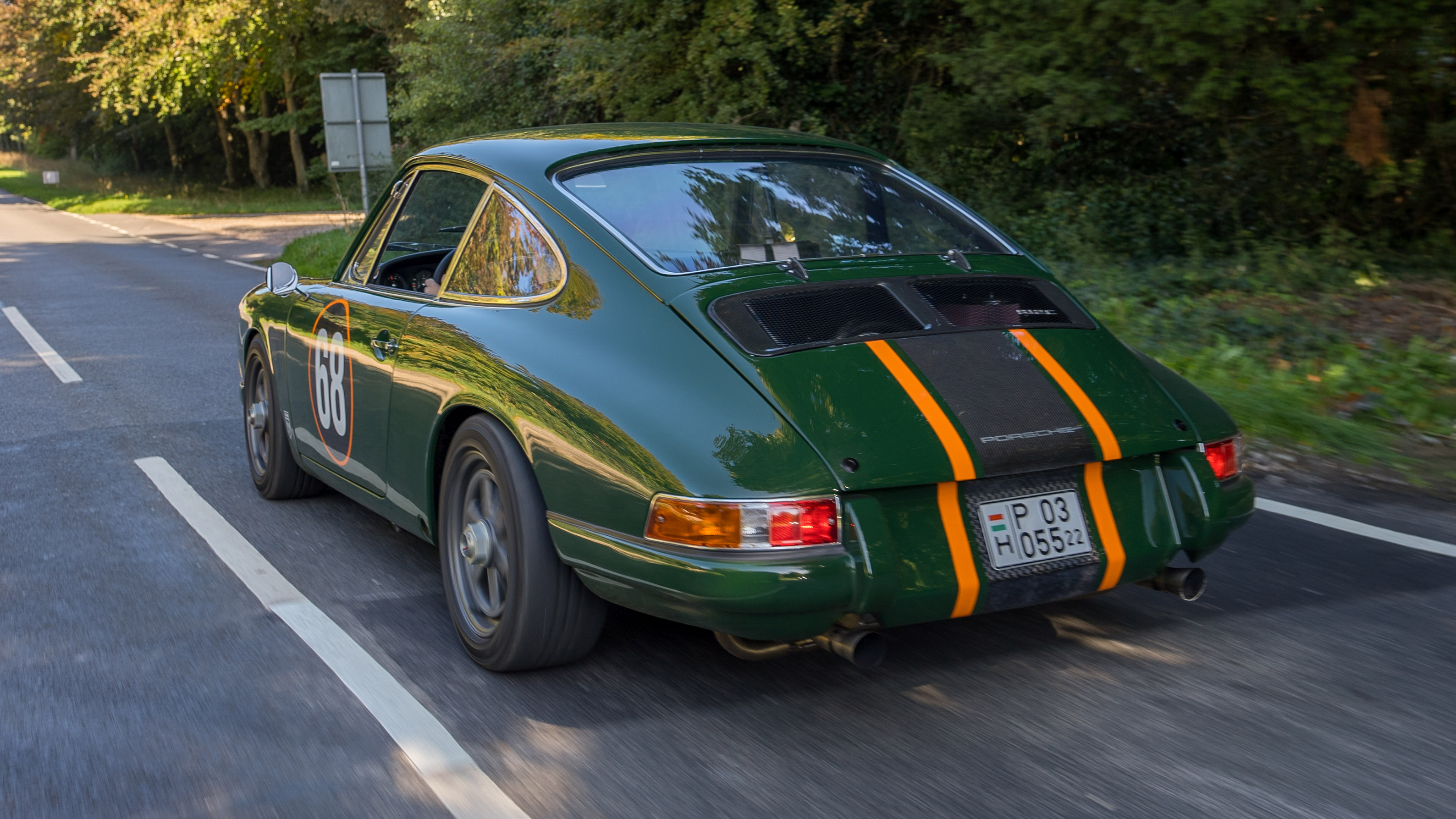 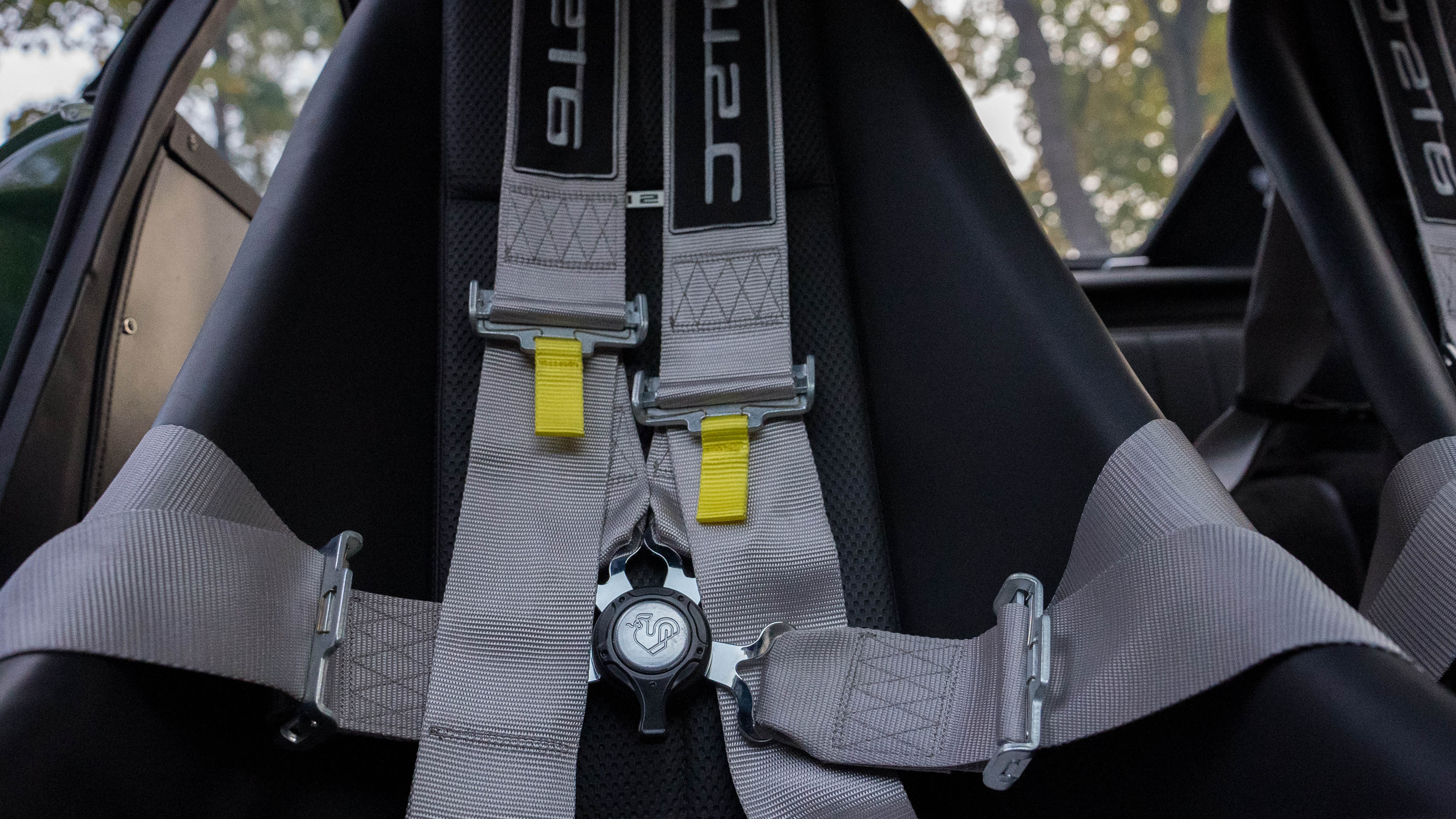 Isn’t it just. What you see here is a Porsche 912 – essentially an entry-level four-cylinder variant of the 911 that was introduced in 1965 to be the lighter, friendlier rear-engined Porsche sports car.

Well, this isn’t actually a Sixties 912. Yep, it’s yet another Porsche restomod. Though, this one does things a little differently from the Singer/Theon Design/Gunther Werks norm.

It’s called the KAMM 912c, and it’s the brainchild of company founder Miklós Kázmér. His background is in filmmaking, but having fallen in love with the 912 he’s creating a dream-team of engineers, air-cooled fanatics and motorsports folk to “create the perfect interpretation” of the lesser-loved Porsche.

I didn’t know Hungary had a big car scene?

Kázmér assures us it does, and that the 912c was born because of that scene. You see, in the country’s post-war communist era those wanting to drive faster, more interesting cars had to get creative with what was available. Home-tuning became commonplace and talented technicians were born. Then, in the 1990s Hungary opened up and western cars began making their way into the country, but the same spirit remained.

KAMM says that the 912c builds on that, with a modern classic turned into a fast road-racer that loses none of its original analogue appeal.

Is it running some monstrously powerful turbocharged modern engine, then?

Far from it. The 912c is still powered by an air-cooled four-cylinder that’s built by Swiss experts JPS Aircooled. It uses the original block but is now a 2.0-litre unit rather than a 1.6 (the US-only 912E did get a 2.0-litre VW engine in period), and here it makes just 168bhp and revs to 6,800rpm. 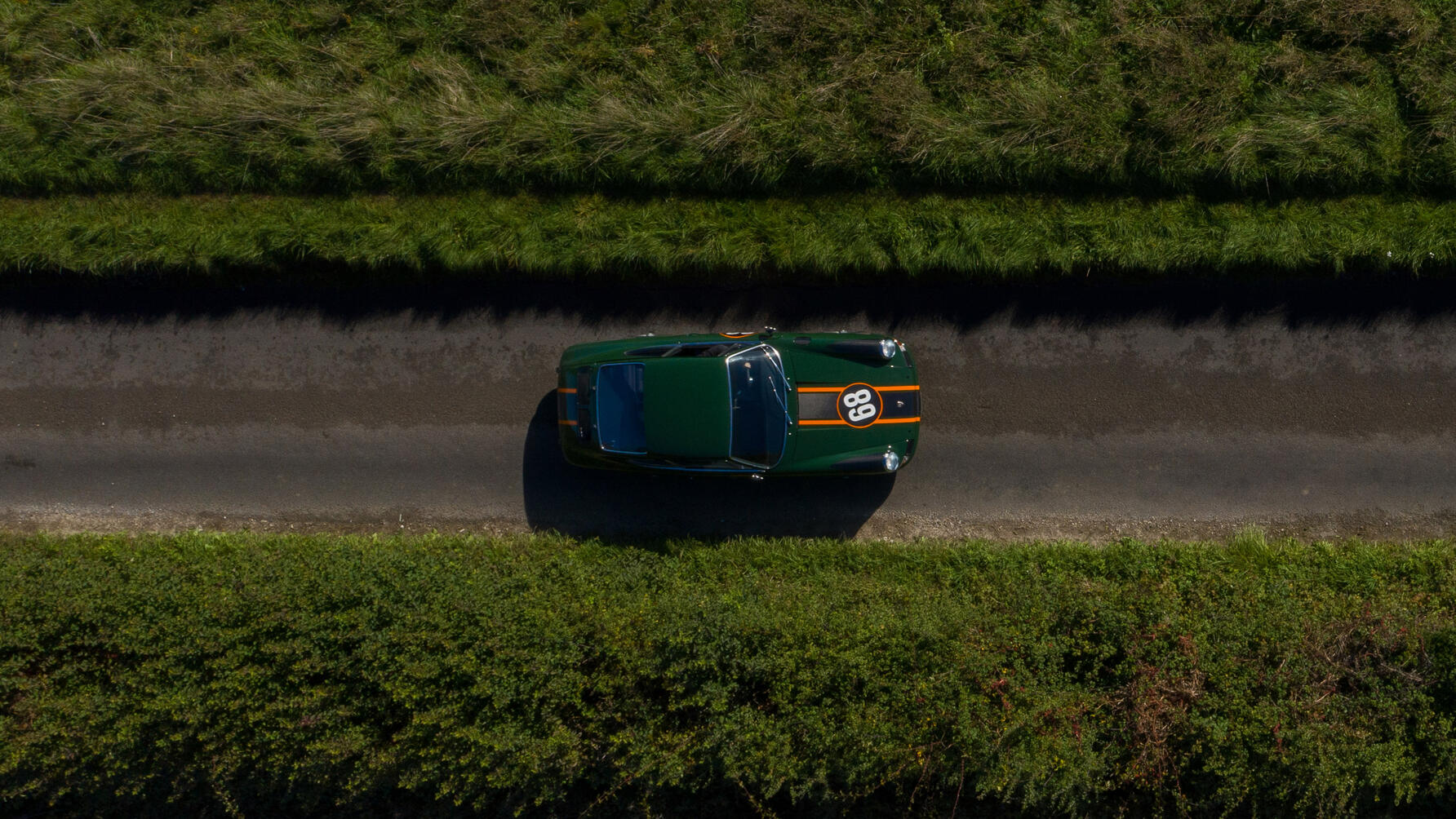 That’s not much power at all is it?

Well, the first thing you need to know is that the 912c is light. Really light. It weighs less than 750kg in its current form, but Kázmér reckons that with a stricter diet it could be even lighter. An original 912 was around the 950kg mark. It may look fairly standard aside from the graphics, but Kamm strips the 912 down to the bare bones and then rebuilds it in the most featherweight way possible, replacing the entire body with carbon fibre panels and Lexan windows, while keeping the interior free from unnecessary addendums.

If you’re already thinking of putting an order in but want to save even more weight, you’ll want to delete things like the chrome window surrounds and the new air conditioning. That could see you get down to as little as 680kg. Combine that (or the standard weight) with 184lb ft of torque and you can see why the 912c doesn’t need any more power.

What else does KAMM do to the original car?

Ready for some detail? The 2.0-litre engine is connected to a five-speed dogleg manual gearbox, with power sent to the rear wheels through a ZF limited-slip diff and a hydraulic Porsche racing clutch. The front brakes are from a 964, while the rears are ventilated Brembo items. There’s a hydraulic handbrake too, plus KAMM’s own custom coilovers up front and a torsion bar setup at the rear. The dampers are adjustable too. The wheels are centre-locking, the tyres are Yokohama semi-slicks and the door mirrors are completely bespoke carbon fibre units.

Despite all the differences and updates, the c follows the recipe of the original 912 brilliantly. It’s the lighter, friendlier Porsche restomod.

That’s not to say it isn’t an event to drive. It’s a car that you have to get used to, but once you gel it provides a fantastically analogue experience. The 2.0-litre four-cylinder is loud and chunters away behind you, freely revving as you go up through the gears with their unfamiliar dogleg positioning. The clutch – despite being a proper racing-spec item – isn’t too heavy, and given that the 912 is so narrow-hipped it’s easy to slot through town and out into the countryside, where the c really gets into its stride.

But is it actually quick?

It is. Because there’s no weight to shift it’ll get up to the national speed limit in no time at all. The quicker you go, the more alive the 912c becomes too, with the weighty steering providing huge amounts of feel through the large Momo wheel. Despite the heft to the steering though, it’s only 1.7 turns lock-to-lock and the result is super direct turn in from even the smallest inputs.

Mid-corner you feel how neutral the 912c is, with the limited-slip diff always wanting to pull you straight and adjusting power accordingly. This is a brilliantly balanced car, but then that was one of the benefits of the original, with its smaller engine mounted further towards the middle of the car when compared to a 911.

As previously mentioned, Kázmér wanted to set the 912c up in proper race spec, so there’s not much suspension travel up front. Thankfully it’s beautifully damped, so it’s firm but never crashy and it’ll stay true even on pocked British tarmac. Like the rest of the car, the brakes are unassisted but there’s a huge amount of feel through the Tilton pedal, and the lack of weight means you aren’t putting your foot through the floor to stop the thing. 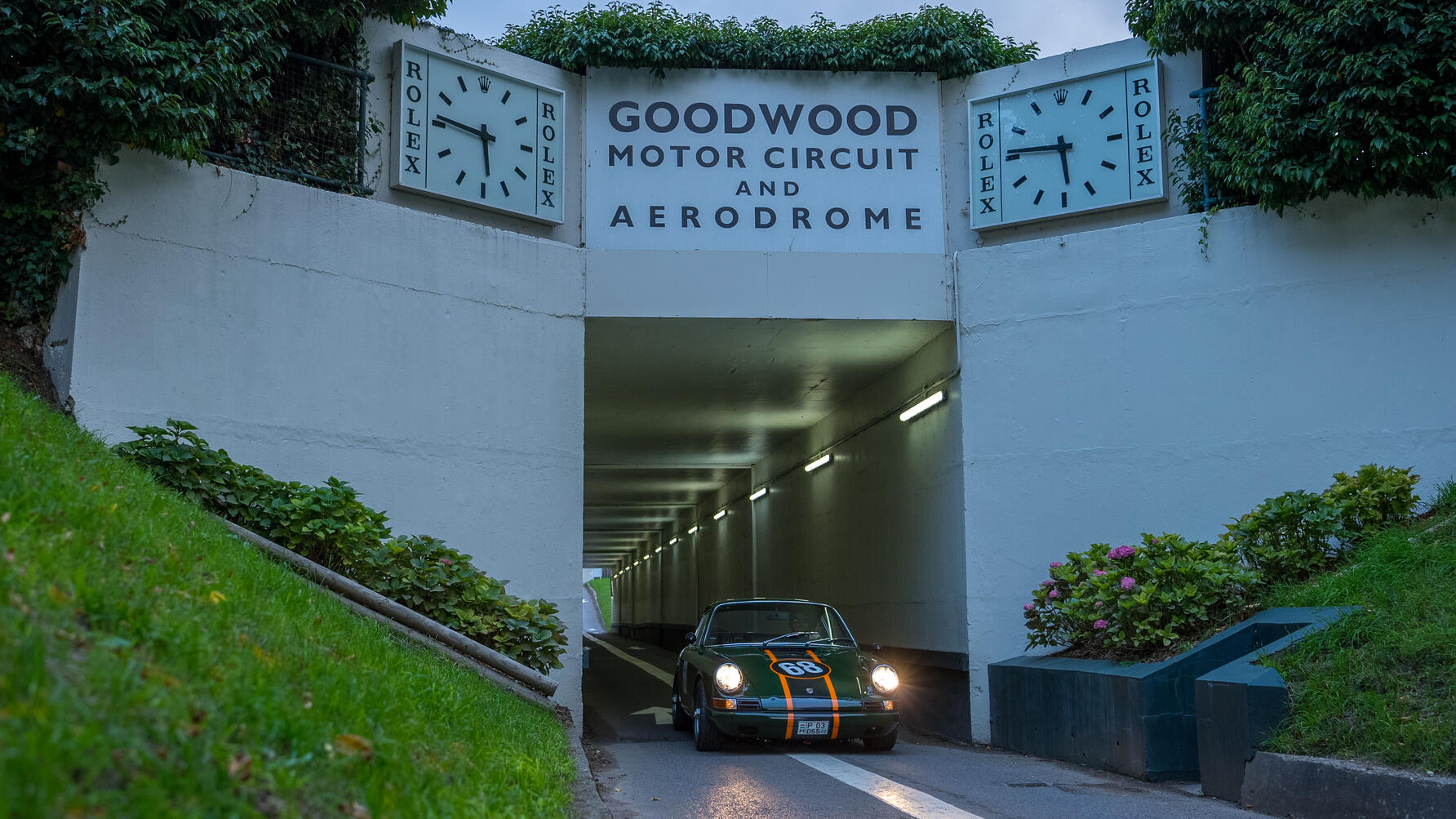 This is KAMM’s first prototype but the fit and finish is still deeply impressive. The gearlever has been moved from its standard positioning but the dash is still original. There are new dials and air conditioning, but there’s no out-of-place digital additions and there isn’t even a radio. Kázmér says he tried to fit a proper Bang & Olufsen sound system, but you just couldn’t hear it. This we like.

The rest of the interior will be down to each customer’s preference, with the option of either more visible carbon fibre, a completely stripped out cabin with an FIA-spec roll cage or a lush leather-lined interior with modern conveniences.

How much does this all cost?

KAMM says prices will start at just over £280,000 with production kicking off in 2023. Now, that’s clearly not cheap, but it is still at the lower end of the Porsche restomod spectrum. That’s chiefly because Kázmér wants these cars to be driven properly.

“I wanted to create something that is reliable, motorsport-inspired and driveable,” he says, while also namechecking things like the Alfaholics GTA-R and the Volvo P1800 Cyan restomod.

Oh, and there’s one other thing – the 912c may only have 168bhp, but Kázmér says that at a recent testing session it was putting in similar lap times to a 996-gen 911 GT3. This is a serious bit of kit, and feels every bit the ‘updated 1960s racer’ that its creator was aiming for.