Chopping 26 contenders down to five was hard enough... now we need to pick a winner. Roadtrip!

I am a Gen Xer. A phrase that means nothing to me. I am generation 205 GTi. A phrase that means everything to me. My colleagues aren’t; some would call them millennials, but mostly they self-identify as generation Clio 182. As a result they’re kind of persuaded about the 205, about why it’s here in the final five at the expense of the Caterham 170R, Lotus Elise or Bentley GT Speed, but there’s a detectable scepticism too.

Let’s answer that first: those cars all do something familiar – we know, to a greater or lesser extent, how they’ll perform, how they’ll reflect against the others. They’re great, but none was going to shake one of the other four loose. Two cars went straight through because they had thrilled us at Dunsfold. Those were the Porsche 911 GT3 and Hyundai i20N. The other pair went through despite a couple of failings, but we knew would perform better on road and intrigue us in the final reckoning. Step forward the BMW M3 and Ferrari SF90.

The Peugeot 205 is the first restored car we’ve ever allowed into the Speed Week shakedown. It’s interesting how we perceive these things, isn’t it? When we look at restomods such as the Singer DLS we often think of them as new cars, but it’s just a question of degree. Where does restoration become modification become new car? 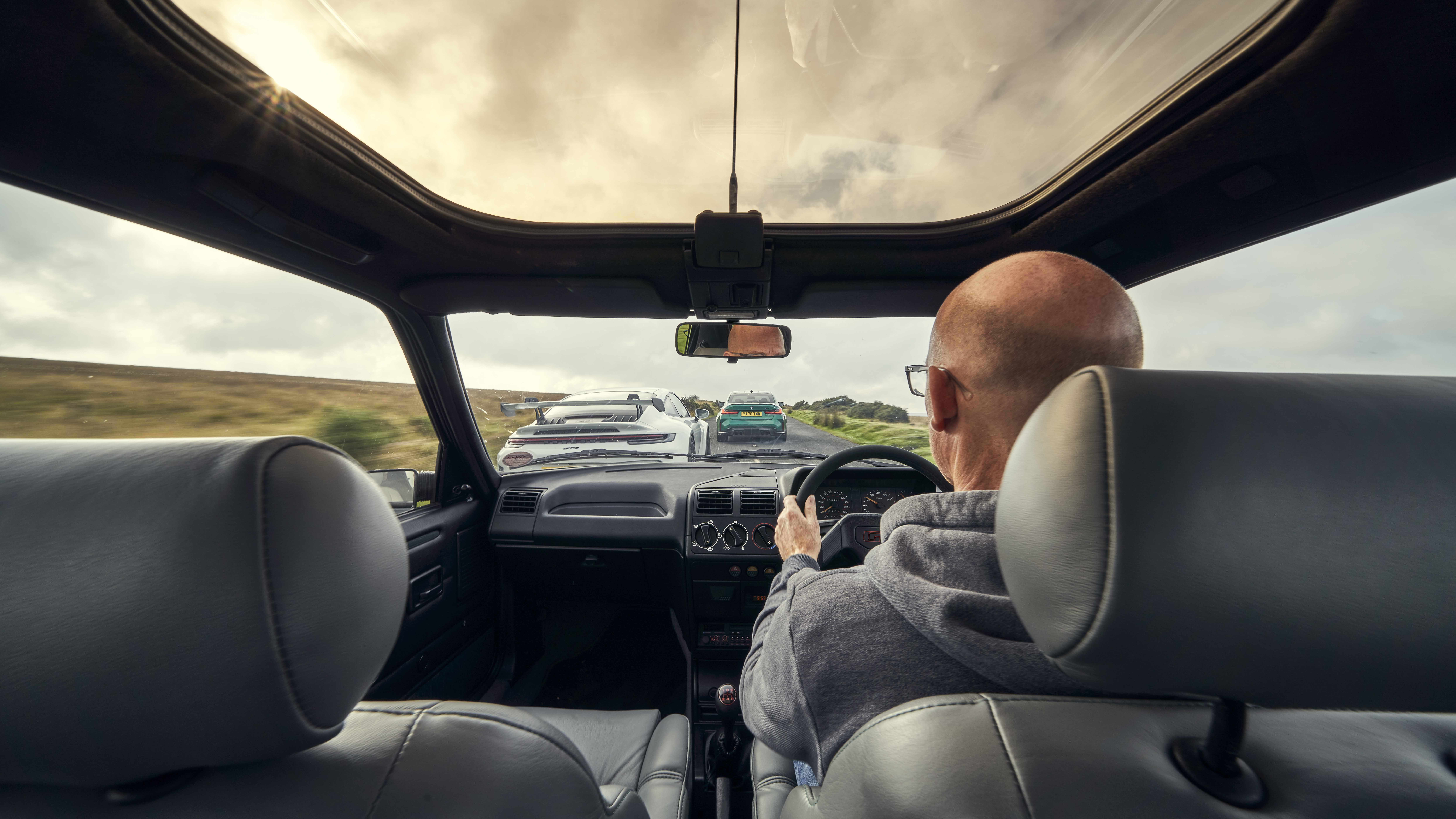 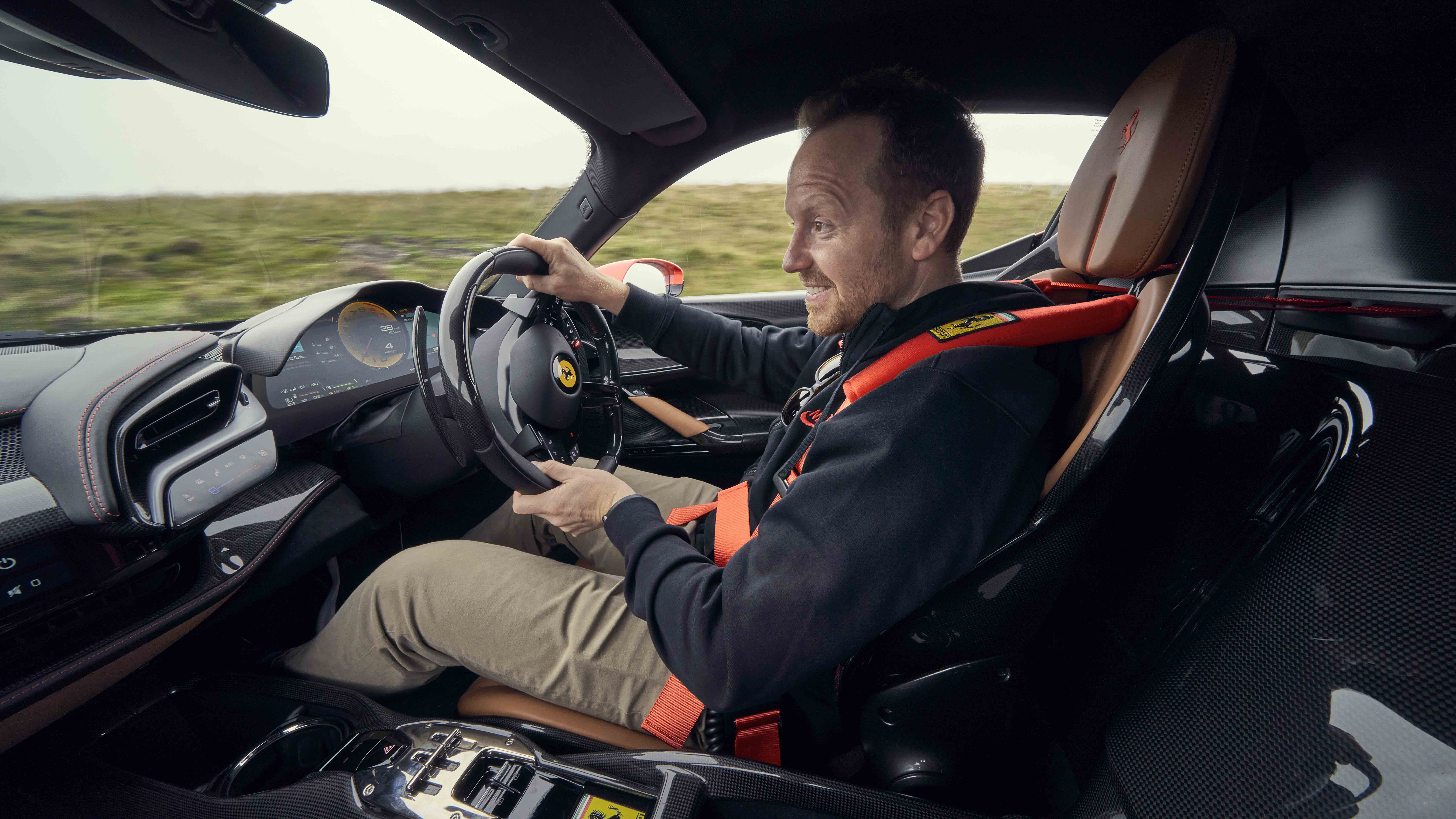 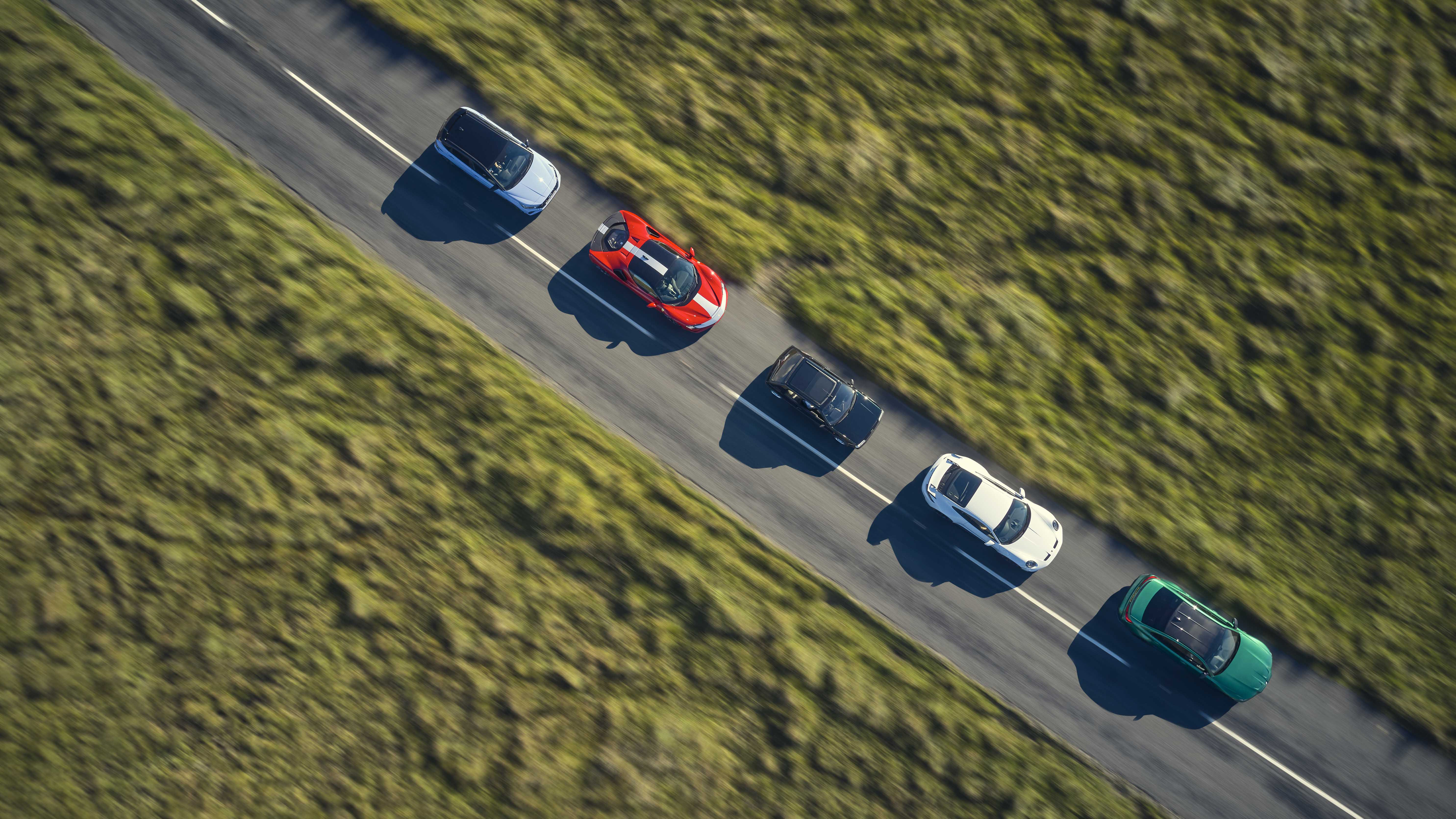 This 205 is a restoration plus. It looks and feels completely standard, the mods are subtle. My colleagues have no knowledge of the 205’s back story, are unaware that this could be the holy grail – it’s a 1.6, which was reputed to be the sweeter handling, but has the power of the heavier-engined 1.9. But more than that, it asks interesting questions about what’s happened to performance and driving enjoyment over the last 30 years. And about the value we put on restomods in general. Because on the whole they’re furiously expensive. Now this is an expensive 205, but £45,000 against the Oselli Edition Mini at £130k looks acceptable to me.

But I get that not everyone responds to the 205 in the same way I do. So I want you to see the Peugeot’s role here not as a fixed constant, but a fluid representative of the hot hatch hero of your youth. And any of them could have blown a hose off the engine, couldn’t they? I’m in the Hyundai and busy being swept away by its dexterity and fluidity, following Rowan in the 205 and marvelling once again at how small cars once were (and also how frail and flimsy), when the Peugeot pulls its magic trick and disappears in a puff of its own smoke.

We pull over. Nothing catastrophic, a jubilee clip has popped off the oil breather. It’s an easy fix, and as designated dad and trumpet blower in chief for the 205, it falls to me to fix it. For amusement purposes we do the job with the Ferrari’s toolkit. Thank God that survived the 30kg weight purge the Assetto Fiorano pack put on the rest of the car. Which included doing away with the adaptive dampers. The ride is firm, road noise intrusive. It’s hectic and when you press go, things happen very quickly indeed. This can cause muscles to tense, and the SF90 accurately reflects this with jagged movements. You can build a more relaxed flow with it, but never expect to go out and use either a low gear or full throttle at any time. If you do, it’s a bonus.

But a very brief one. Yes, the SF90 makes 1,000bhp approachable and usable. That’s a significant trick, but it doesn’t readjust physics or dodge the rule of law. If you’re doing 30mph and hold your foot down for three seconds, you’ll be doing over 90mph. Three seconds. So instead you explode out of corners in a fizz of turbos and electricity, face distorted by g and terror and immediately the ‘fun’ is over. For me the engineering achievement is more impressive than the way it drives. I admire it, the traction and deployment is exceptional, but what do you do with it? It’s got bugger all load capacity and an 812 is more elegant, so you’d use that for weekends away. On track it was blistering but less connected and engaging than the Huracán STO. Plugging a Ferrari in was all very novel, though. Zero emissions posing it is then.

From Ferrari to BMW we almost halve the power to weight ratio and still have an extraordinarily fast car. It’s a muscular machine and can easily catch the GT3 unawares. One squirt of turbo can put a hundred yards into the 911 before it’s had a chance to downshift to a gear that gives it over 5,000rpm and the fightback can start. And at that point it’s academic anyway, because that handful of seconds is all you’ve got...

The new M3 is a great all-rounder. Strong colours limit the nasal impact, last night Jack Rix reckoned he had the most comfy cruise from Dunsfold to Taunton and driven at up to 80 per cent, it’s predictable, incisive and accurate. Push harder and on roads as lumpy and unforgiving as these, those clear lines of communication start to distort. The steering becomes fractionally blunter, the suspension struggles to keep pace.

It’s plain ruthless, a naturally aspirated assassin. This is a GT3 as tough as it comes

Blame the 911 GT3. Here is a car that just gets sharper and sharper the harder you drive. It’s plain ruthless, a naturally aspirated assassin. This is a GT3 as tough as it comes, with PDK, cage and all the rest. It was right for the track, but the second we leave Dunsfold it feels wrong. You want manual, you need that interaction and sense of involvement, or this latest GT3 can come across as slightly cold-blooded. The double wishbone suspension has cleaned up the front end, made turn-in effortless, but it’s also eroded yet more 911-ness. Same goes for the 4.0-litre flat-six. It does the numbers, has the response, but is cleaner, smoother in its delivery, has lost some of the rasping voice, anger and ferocity. If I had a straight choice of GT3s between this and the last one, I’d have the last one. In its flaws it was more interesting and involving to drive. But then if someone offered me a 997...

It’s the Peugeot that is largely causing this reflection. I thought we might all come away convinced the best driver’s car here is actually 30 years old. But it’s not. Yes, it’s great being able to throw three whole gears rather than three seconds at a burst of acceleration, but it’s amazing how far chassis stiffness, steering response, driving position and suspension have come since the 205 was cutting edge. But boy do I adore the size and scale of it, the fast, flicky gearshift, the fact you’re always bossing it, asking more, rather than struggling to keep up. It’s tiny, so you always have options for trajectory and line, the cabin is as glassy as a greenhouse, the instruments clear because there’s only six or eight bits of information to process. You’re occupied and undistracted, so there’s a purity to it.

But you know what? The Hyundai i20N makes it feel old, slow and wobbly and shows that modern hot hatches haven’t lost the knack at all. In fact, with the GR Yaris and Fiesta ST, we’re in a bit of a golden age right now. The Hyundai isn’t as playful as the Ford, nor as boisterous as the Toyota, but there’s a keenness to it, backed up by huge ability and real dynamic polish that makes it something of a standout, not just among its peers, but among the whole spectrum of Speed Week. It’s perky and deft, a car clearly on an upward trajectory where most of the others here are searching for relevance amid ever tighter regulations. They feel constricted, thrash against their bonds. The i20N is freer, more spirited. It’s the winner of Speed Week 2021. Are you 15 years old and reading this? You’re not Gen Z, you’re generation i20N. Hope that’s a tag you can get on board with. 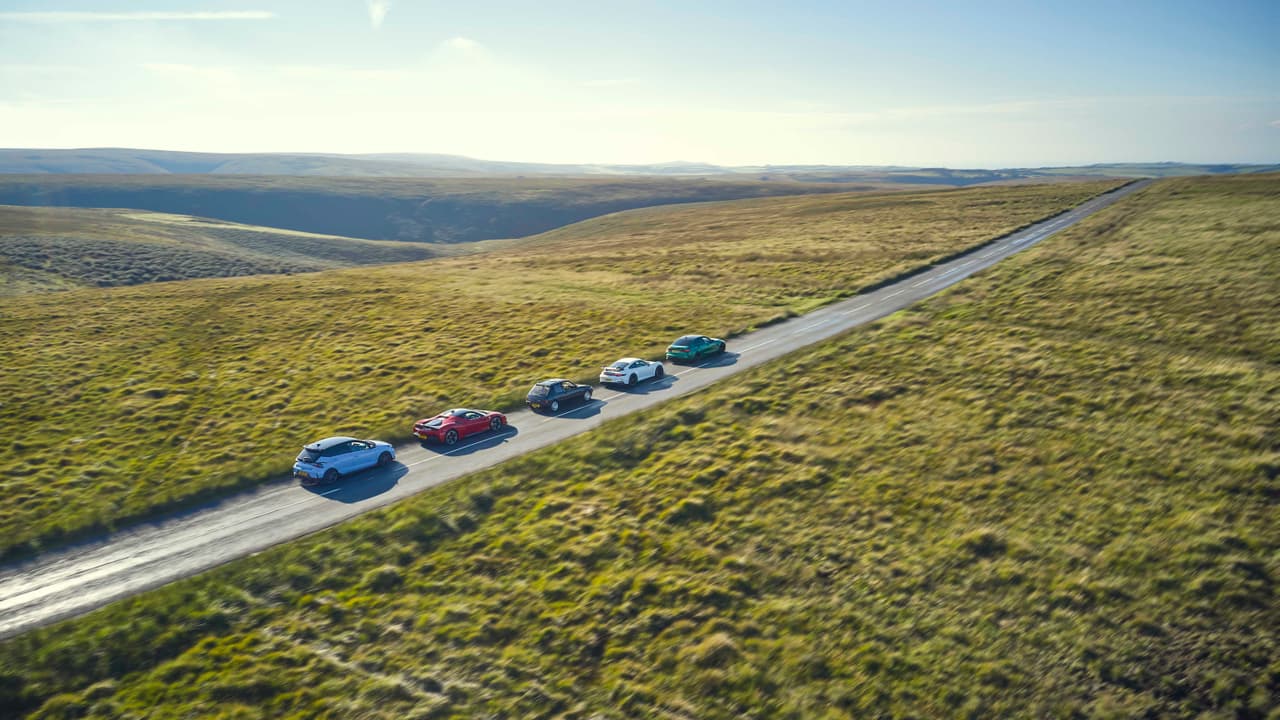