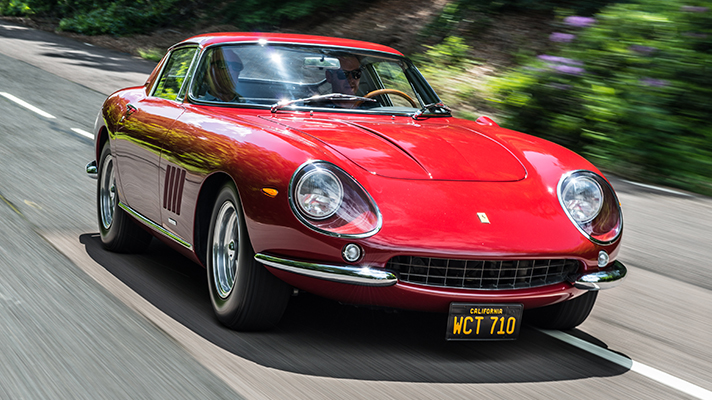 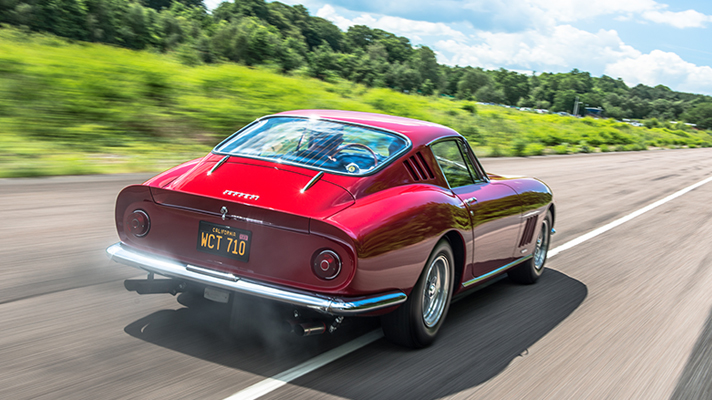 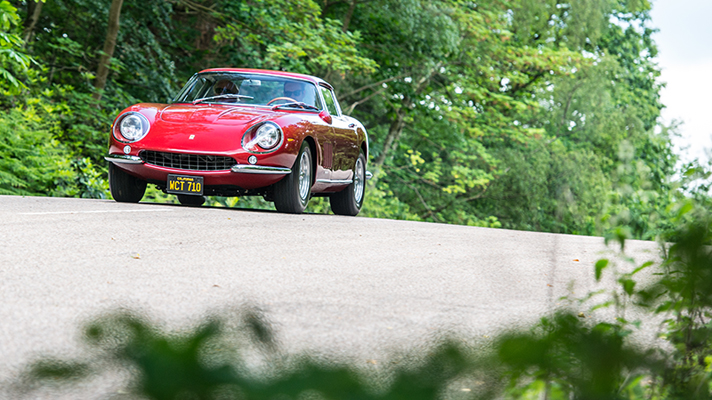 Steve McQueen. He was the Cooler King in The Great Escape. He handled much of the stunt driving in Bullitt himself, the film famous for arguably the greatest movie car chase of them all. And he was so smitten with motor racing that his 1971 vanity project Le Mans is an unashamed love letter to the world’s toughest race, with zero concessions to a mainstream audience. It’s no coincidence that one of the best-known images of Steve sees him offering a two-fingered salute.

Like so many Hollywood legends, he also exited stage left prematurely, dead at 50, too young certainly, but then he’d lived life faster than most. A lot faster. In fact, his hunger for speed – along with his bulletproof screen persona and legendary love of women – was possibly his defining characteristic. The McQueen mythology seems to get bigger with every passing year. Put it together with a 1960s Ferrari and you’ve got something of almost unquantifiable cool, a snapshot of a golden era frozen in time.

The world’s rich have recently gone crazy for high-end classic cars, preferring to invest in tangible assets rather than stocks and shares. Ferraris provide the gold standard, with rarity and provenance the key factors in determining values. Only 280 275 GTB/4s were made, and that scarcity means they’re £1m-plus cars already, and rising. A 275 owned from new by Steve McQueen, well, there’s only one of those, so that’s a different magnitude of rare. In 2011, a Porsche 911S the great man drove while shooting Le Mans – it’s also in the pre-credit sequence – was sold at auction for a thumping £832,800. That’s eight times the figure a good 911 S would usually command. We’ll know more in August when RM Auctions brings the hammer down at its Monterey sale, but if you haven’t got upwards of £8m to hand, don't bother bidding.

You can’t drive a Picasso, but as I slide into the Ferrari’s bucket seat it’s impossible not to dwell on this thing’s unique status. Its current owner initially preferred to let the car speak for itself, but he’s here today and as far as I’m concerned it's a case of ‘Steve who?’ once I start doing my homework. Vern Schuppan arrived in the UK from Australia in 1969 as a karting champion, on a two-year mission to crack Formula One. Despite having never raced in single-seaters, he won the 1971 British Formula Atlantic Championship, and finished fifth on his F1 debut in a BRM at Oulton Park in a non-championship round the following year. Niki Lauda pinched his BRM drive in 1973, but in the decade that followed he finished third in the 1981 Indy 500 – racing a McLaren for his own team – second at Le Mans in 1977 and ’82, before winning the French 24 hour classic in the Rothmans-sponsored Porsche 956 in 1983.

As you can imagine, the anecdotes come thick and fast, many of them unprintable. He was at Paul Ricard testing the very day Lauda turned up boasting of how he could make the BRM two seconds a lap quicker (it’s in Rush). He co-drove with James Hunt in the 1974 Nürburgring 1000km, and agrees that it was a hellishly dangerous circuit. ‘Actually, I was driven round the Nordschleife by Jackie Stewart,’ he recalls. ‘He was demonstrating a 3.0-litre Ford Capri to a journalist, so I got in the back seat…’

These days, Vern lives in Adelaide, and regularly scratches the classic car itch. He’s owned the 275 since 2010, and it’s become a major project. Not least because this Berlinetta had undergone a slick NART Spyder conversion back in 1980, and Vern wanted to return it to a spec identical to the one Steve McQueen had gone for. The restoration was done in Maranello by Ferrari’s Classiche department, and took two years. Ferrari’s insistence on returning cars to their original factory spec has ruffled a few feathers over the years, but Vern has nothing but praise for the job they did on his 275. Besides, restoring an unauthorised rep to factory blue-blood was right up their Via. Returning a chopped car to its fixed head state sounds like a nightmare, but with the original jigs – not to mention the fact that the original boot-lid, glass, and roof miraculously turned up – the process was pretty smooth. The car looks, feels and even smells perfect.

After his beloved Jaguar XKSS, the 275 GTB/4 is surely the sexiest car Steve McQueen ever owned. It arrived in 1964, and represented a major step forward from the 250 GT model line that Ferrari had been finessing since 1953. Rather than a beam axle and cart springs, the 275 had a fully independent suspension and a rear-mounted five-speed transaxle, while the V12 grew to 3.3 litres, breathing through four or six – often temperamental – Weber carbs. In 1966, the four-cam version landed, hiking the power output from 280 to 300bhp, pumping up the mid-range, and reducing the engine’s valve angle.

It’s possible that contemporary British and American sports cars influenced Pininfarina’s long-nose/short tail styling, but in detail and execution this could only be Italian. Factory 275s had Campagnolo alloys, but McQueen had them replaced with beautiful Borrani wire wheels (taken from a NART Spyder he also owned, that had been pranged the first weekend he had it). Note also the non-standard driver’s door mirror. It’s useless but looks cool, like so many of the best things in life.

The base of the windscreen eats into the door, so it’s hard to get into the 275, and stiflingly hot once you are in. The wheel is large, and the steering itself unassisted and low geared. Even McQueen must have sweated a bit moving this thing around at low speeds. By contrast, the column stalks are skinny little wands. Turn the key, and following a short whir from the starter motor the V12 floods the cabin with one of the finest sounds in the known galaxy. Honestly, I’d be happy to leave it at this point.

Not least because, as with all old Ferraris, the gearbox magnifies the tiniest operator error until the oil is nicely warmed. The crunch of expensively restored cogs is as nasty a noise as the engine is a pretty one. First is on a heavily sprung dogleg, and the action across the open gate into second needs effort. More perspiration.

Here’s another thing: old cars – especially old Ferraris – do not like pootling. Vern is alongside me, and I can sense him wincing: not because I’m going too fast, but because I’m not going fast enough. He is a racing driver after all. The carbs cough and splutter, as I fail to do what the V12 was designed to do – rev it out to 7000rpm and beyond.

So I do, and have what is often referred to as a ‘moment of clarity’. Deep in Ferrari’s DNA is a love of normal aspiration, a chemical and mechanical process best enjoyed across 12 cylinders. The 275’s 300bhp might seem slightly ‘meh’ by modern standards, but I swear you can feel every single one of them saddling up and charging off. There’s no step or software manipulation here, just a smooth, linear, thrilling sense of flow.

The faster you go, the better it gets. But it also means that you have to time all your inputs – steering, brakes, and gearchange – with proper precision. The 275 rides well, and it’s generally very composed, but it’s also a 50-year old design, with the dynamic repertoire to match. It forces you to think hard, and drive properly. All the stupid stuff that any half-decent 2014 performance car simply lets you get away with is not tolerated here. And it would be an expensive mishap.

Very expensive. Having been approached to sell by a few of the major scene players, and having had it on display in the Ferrari museum for six months, Vern has decided the time is right to part with WCT 710. He’s clearly no greedy breadhead, and with one of the 10 original 275 NART Spyders making $27.5m at RM’s 2013 Monterey auction, you can hardly blame him for being curious about exactly what this gorgeous car is now worth.

‘A Ferrari is an object of art, the rarer the better. Is it crazy money? Look, I don’t get the $40m or $50m phenomenon, but then I don’t see how a painting can be worth $100m. Whatever this car makes, I wouldn’t be surprised if the next owner could make even more.’

(RM Auctions’ Monterey event is due to be held 15th-16th August. Many thanks to them and to Vern Schuppan for the opportunity to drive the car)