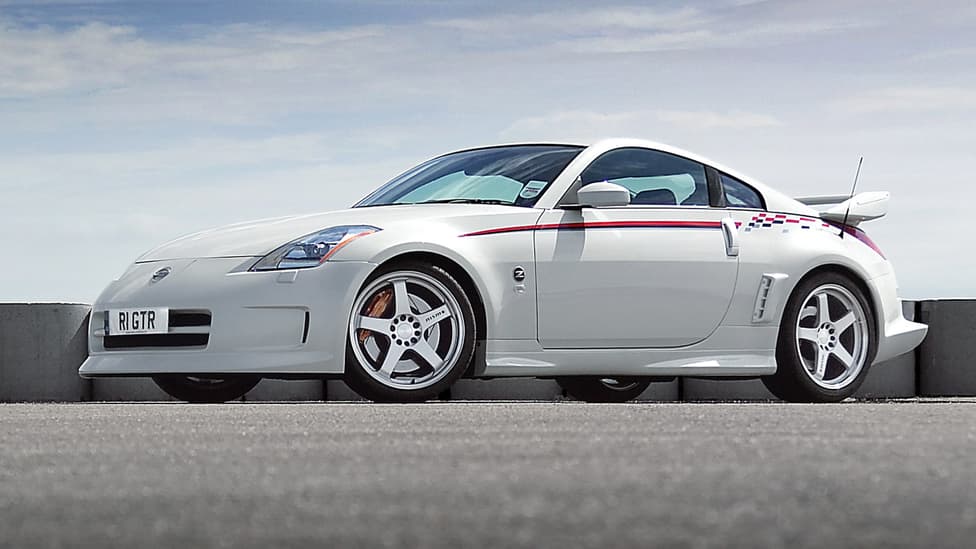 A sweaty cyclist pulls alongside, mouth agape, hands gesticulating. He’s taking in this 350Z’s loud graphics, Eighties-style pearlescent white paintwork and wildly indiscrete bodykit. Ah yes, he’s admiring the adjustable wing perched on the once-shapely tail, modelled after the one on the racer that took victory in the Japanese GT500 touring car championship last year – that’s the win Nissan Motorsports International (or Nismo) is marking with the creation of this 350Z S-Tune GT.

Or perhaps he isn’t. “T****r!” he shouts through the open window, before pedalling off.

Briefly riled, I’m determined to reveal some of this car’s other modifications to him. Like the fatter exhaust outlets, producing sound effects almost as subtle as this car’s external appearance whilst hauling away from a standstill. Then there’s the freer-flow carbon-fibre air ducting, new inlet and exhaust camshafts, lightened flywheel, reinforced conrod bolts and uprated clutch; the engine produces a slight gain of 20bhp and revs to a steeper 7,200rpm redline. The cyclist is soon left in a cloud of partially burnt super unleaded as I disappear off.

The sensation is one of a far greater gain in speed than Nismo claims. The engine revs more easily, feels smoother and lays on a sharp extra thwack of acceleration above 4,500rpm. This seems to have been an obsessively thorough engineering job. The exhaust even quietens to a background whirr at a cruise.

There’s attention to detail elsewhere too; 19-inch rims plus new springs and shocks are matched to a 20mm drop in ride height. Sounds straightforward enough, but alongside the increase in grip and reduction in body movement, it’s the way the Z retains its balance and suppleness over rough roads that impresses most vividly.

There’s even a sense of civility to the way the enlarged, grooved Brembo brake discs are accompanied by a set of pads incorporating ‘a polishing agent to extremely suppress unwanted noise,’ as it says in Nismo’s brochure.

Unfortunately, the Alcantara- trimmed seats are too small for most drivers, the total cost if you chose to import a 350Z S-Tune here would hit £50k, and the ridiculous chin spoiler and fake brake cooling ducts prove how a few ill-advised lumps of plastic can wreak havoc on the image of an otherwise very cleanly, crisply styled car.

Stuck at a set of traffic lights, the cyclist catches up. "You’re still a t****r", he mouths. The thing is, I’m finding it hard to disagree.

Verdict: Mechanically, would be a fine template for 350Z MkII. Visually, you’d better hope they don’t...