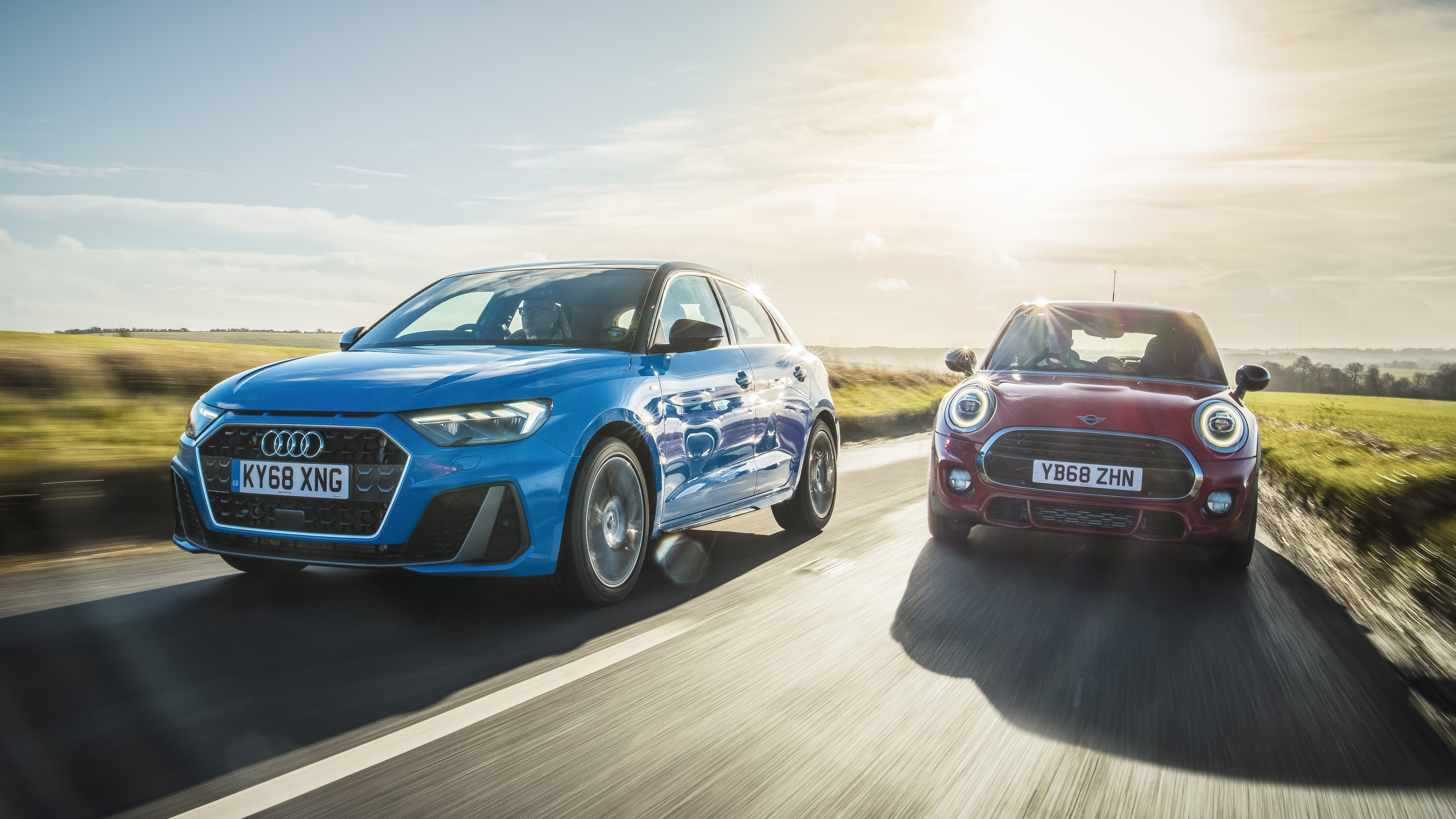 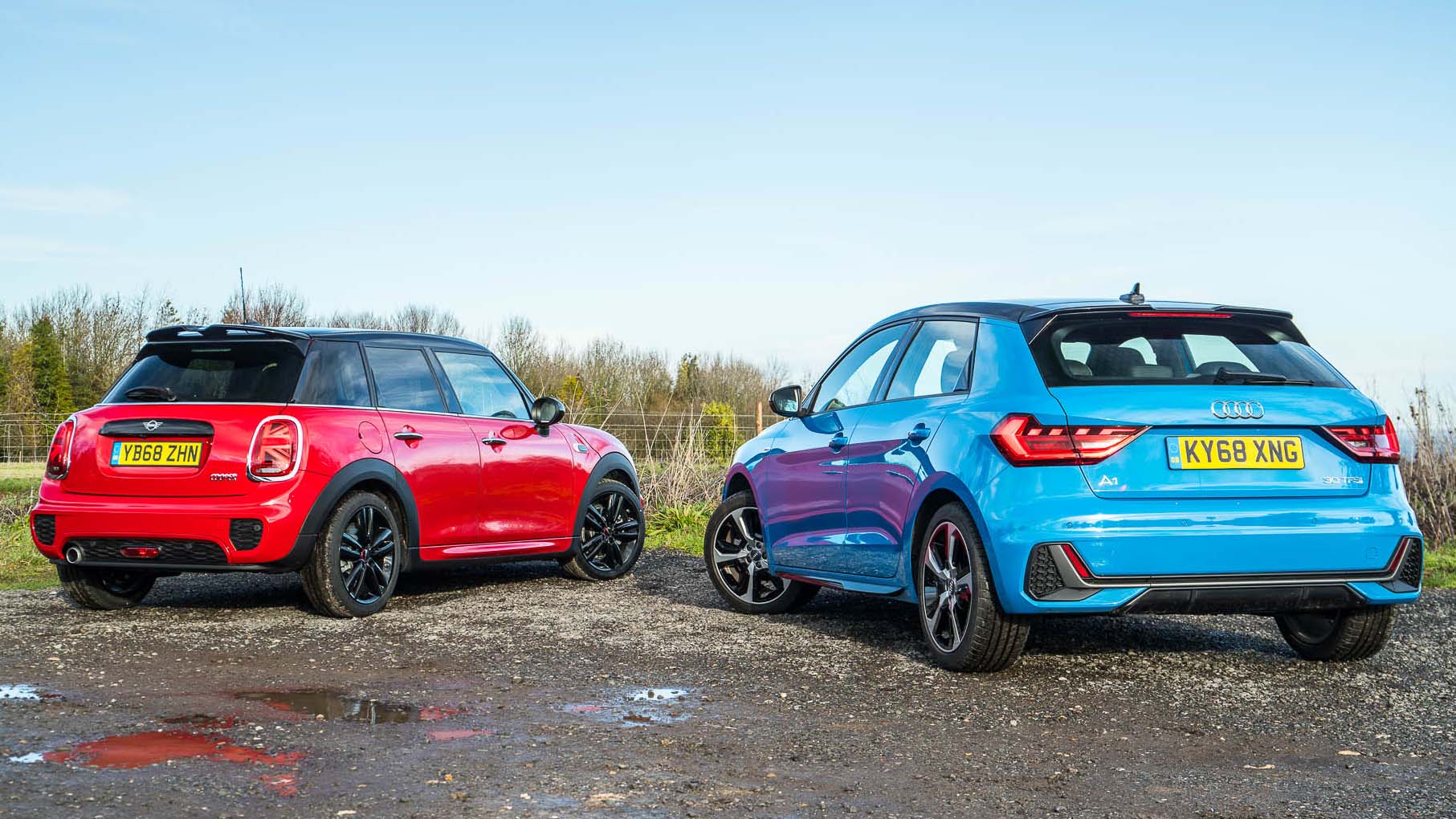 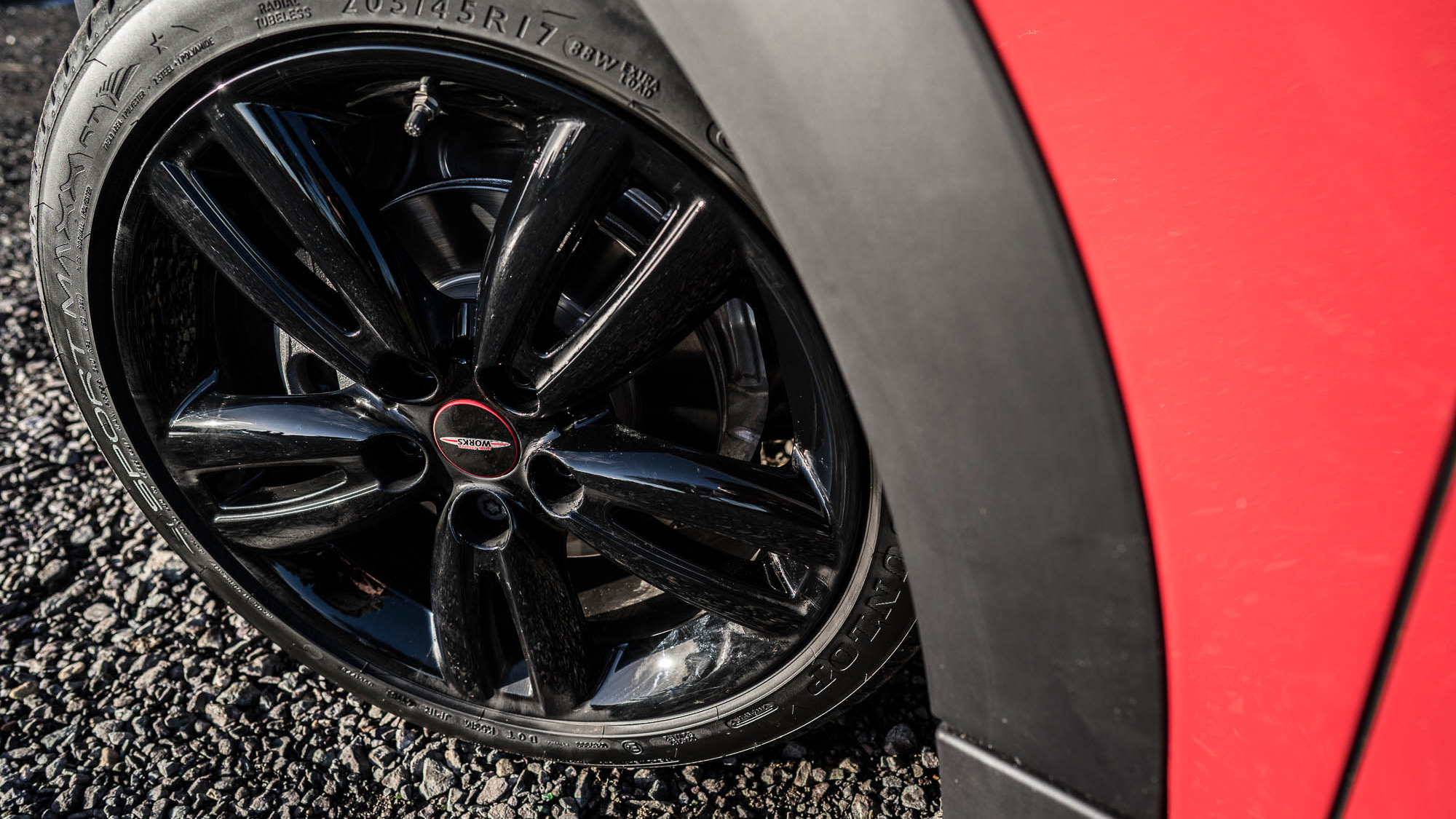 The Audi A1 isn’t just late to the party – it’s not even bothered with a costume. The first A1 arrived a yawning nine years after the reborn Mini basically invented the small, cool, posh car for the 21st Century. Now it’s back, and the sequel has almost dabbled with the Mini’s sacred territory – retro. Look! Those three (fake) intakes under the bonnet – straight from the Sport Quattro. The A1 is that guy who turns up to a fancy-dress party still wearing his crumpled suit from the office, and tells everyone he’s come as James Bond.

In S-line trim (bigger fake intakes, sportier seats, 17-inch wheels) it looks angular, and downright angry. Bit plasticky, too. The Mini arrives and immediately looks cuddly and toylike. But cute? Nope, this third-gen Mini, especially in l-o-n-g five-door form, is too big and too ugly to be all cootchi-coo-adorable any more. The droopy bottom lip of this Sport pack version gives it the expression of a toddler who’s just been told no pudding before eating your greens. And what’s going on with those Brexit taillights? How do we vote no on those?

Both make an impression though, which is why you’d buy one over say, a Seat Ibiza or Ford Fiesta. Both superb small cars, and both cheaper. But they’re less likely to turn heads on the high street than a charity shop closing down sale. What’s more, the ex-Citroen DS3 and Fiat 500 are now so dated you need National Trust membership to drive one. The premium supermini game is a two-horse race.

This particular A1 has already been under the Top Gear test drive microscope, where we quickly worked out you don’t need to spent the thick end of £30,000 to get a good one. But, it gives us lots to talk about, so this 113bhp 1.0-litre turbo with the seven-speed S-tronic automatic gearbox is what we’ve got. Helpfully, this Mini is bang on in spec. Five doors, a 1.5-litre three-cylinder engine good for 126bhp, plus Mini’s latest twin-clutch auto ‘box. It costs £25,410 with its own crate of options applied.

The Mini looks familiar, so I’m drawn to the new and exciting A1. New, exciting and cheapo inside. The doors are the chief offenders – the whole inside of the door is tinny grey plastic, topped with yet more tinny plastic of the scratch-prone, gloss black variety. The main dashboard trim looks like a piece of Christmas wrapping paper, and seems to invade oddly far into your personal space. And the whole lower section where your pumpkin spiced latte and key live is all rigid, grim trim.

The old A1 Mk1 was plusher. The money’s been spent ensuring that even a basic A1, if such a car ever exists, has two screens: one up in your face presenting digital instruments, and another in the middle of the room where all the functions and menus live. Smartphone mirroring too: that’s standard. It’s a sharply rendered, snappy-operating, well-laid out touchscreen this, truly one of the best out there. Is it as easy to use while bouncing along a British B-road, without totally blanking eye-contact with the road, as, say BMW iDrive? Categorically not.

Oh look what we have here, in the Mini – BMW iDrive. Complete with cheerier graphics, this is a superb system to work with, twiddling between podcasts, sat-nav, Spotify and how bright you’d like your ambient lighting. The oblong screen in the dormant crater where the big speedo used to live still looks ugly, and the overlapping rev counter and speedo ahead of the driver are too fussy, but the Mini’s tech certainly doesn’t feel dated next to the new Audi.

The overall cabin design does – the pastiche might have been a bit too overdone by now. The toggle switches and bulbous fittings are like a novelty phone case – fun for a while, then a trifle irritating. And you might long for the Audi’s pragmatic layout. But, Mini deserves credit for sticking with switches and buttons instead of fingerprint-ridden touchscreens, and there’s no denying this is a far higher quality place to spend your time. Most of the trim you prod is squidgy with soft-touch lux, and general panel fit is tight. The Audi retaliates by having better visibility – the Mini’s upright pillars and long roof make spotting that high-mounted traffic light on the way into a roundabout a pain.

Get a clean entry to the roundabout, or any set of bends, and the Mini will make the most of them. Sure, all the ‘maximum go-kart feel’ marketing is nonsense, but underneath it all – and even on a humble automatic Cooper with no driving modes or adaptive suspension, this is still a cracking chassis. And a fun (big) little car.

The price you pay for the Mini’s freakish body control and agility when you’re really leaning on it, and marvelling at how it grips, how truly it steers, and how obediently it responds to lifting off the throttle and quick steering inputs, is a boisterous ride around town. Some of that would be mitigated by binning the ugly Sport Pack and its John Cooper Works 17-inch rims, but the bobbly ride is a Mini trait you’ll not eradicate with any combination of options. It’s never harsh, but it likes to excitedly inform you of pretty much any road imperfection, tugging at your hands like a hyperactive child clinging onto a weary parent.

The A1’s far better behaved. It’s been to finishing school, and the result is possibly the most refined small car ever. Mark the date, here we are in December 2018, and we’re driving an Audi S-line that smothers British roads like it’s levitating. Only when you come across a really big pothole does the A1 give the game away, big-style, as a jolt ricochets through the structure. The suspension can sweat the small stuff, but give it a really meaty imperfection to chew on and it runs out of travel. Hardly out of the ordinary in a supermini, but more notable in the A1 because it’s just so damn quiet.

Like the A4 did for repmobiles and the Q7 did for SUVs, the A1 sets a new standard for how quiet a small hatch can be. The Up GTI engine is miles smoother and better damped here than it is in any other Seat or VW role, and it insulates wind noise like an exec saloon. Road noise is just a bit more intrusive, but the Mini’s far worse for that, again in part due to big wheels and tyres. All Minis like to chatter about what surface they’re rolling over though. If you want library ambience in a shopping car, it’s the Audi that walks it, so far as the road manners are concerned.

But in this tit-for-tat battle, yet again the Mini closes the gap and the A1 stumbles. Point the Audi, with its peppy motor, schporty S-line promise and often-immaculate road manners down the same stretch of road where the Mini has you marvelling at its tarmac rally car aspirations, and the Audi… sort of falls to pieces.

Dead steering, tardier gearbox (with no paddles, like the Mini, but lazy shifting speeds) and more engine inertia than the mini’s sweet 1.5-litre triple conspire to slow you back down. Get braver on the brakes, carry that hard-won momentum and the suspension that soothes back in the village runs back out of travel and leaves the body rocking. In one fast direction change, the Mini puts a couple of car lengths on the Audi. It’s an extreme test, and no-one really drives these cars flat out except the 17-year olds who will own them in five owners and ten years’ time. But Mini maintains the rep for making the most chuckable supermini this side of a Ford Fiesta.

Other Mini tropes remain, of course. Even this five-door is desperately short on rear passenger room – the A1 has it licked, seating adults in the rear for those short favour trips way more comfortably. At least the boot is slightly less pokey – in fact, the Mini’s 278-litre cargo bay trumps the A1’s by a mere eight litres. Overall, the A1’s a more useful shape – if you need to supersize your Mini, check out a Clubman.

For more people, more of the time, the Audi is the better car here. It’s quiet, very comfortable, more spacious, tidy and easy to drive and it has a more mature image that a few folks, put off by the cartoon Mini, might gravitate to. It has an exceptionally smooth and frugal engine, and you can get all of the above without lathering it in options. Our pick wouldn’t even be an S-line – go for Sport trim, and avoid the hefty extra packs if you can.

You’d put up with a jigglier ride, noisier cruising, less space and wacky ergonomics to own the Mini, on the off-chance that, should you fancy ‘going for a drive’, it handles with a sense of humour. In 2018, that feels like an anachronism – just like the caricature Mini itself. So, the Audi’s the better car, and wins. It’s a good car, a sensible car, even if it’s not the life and soul of the party.