Break out the test gear, it's time to find out how quickly they go

Hot hatches rock our world. Especially when they’re tough little nuggets like the new Toyota GR Yaris. As I hope you’ve already seen, it beat all its rivals to be crowned our champion hot hatch. If not, click these words.

But here the GR Yaris does not finish in first place. Because here we’re not deciding which is the best hot hatch, but something much simpler: which is the fastest.

While we had our seven contenders down at Dunsfold we put them all down – and up – the quarter mile, and averaged the each direction runs out. One thing to note though. The GR Yaris turned out to be a much better sprinter than Toyota claims. Much.

Here, counting down from last to first, is how they got on. 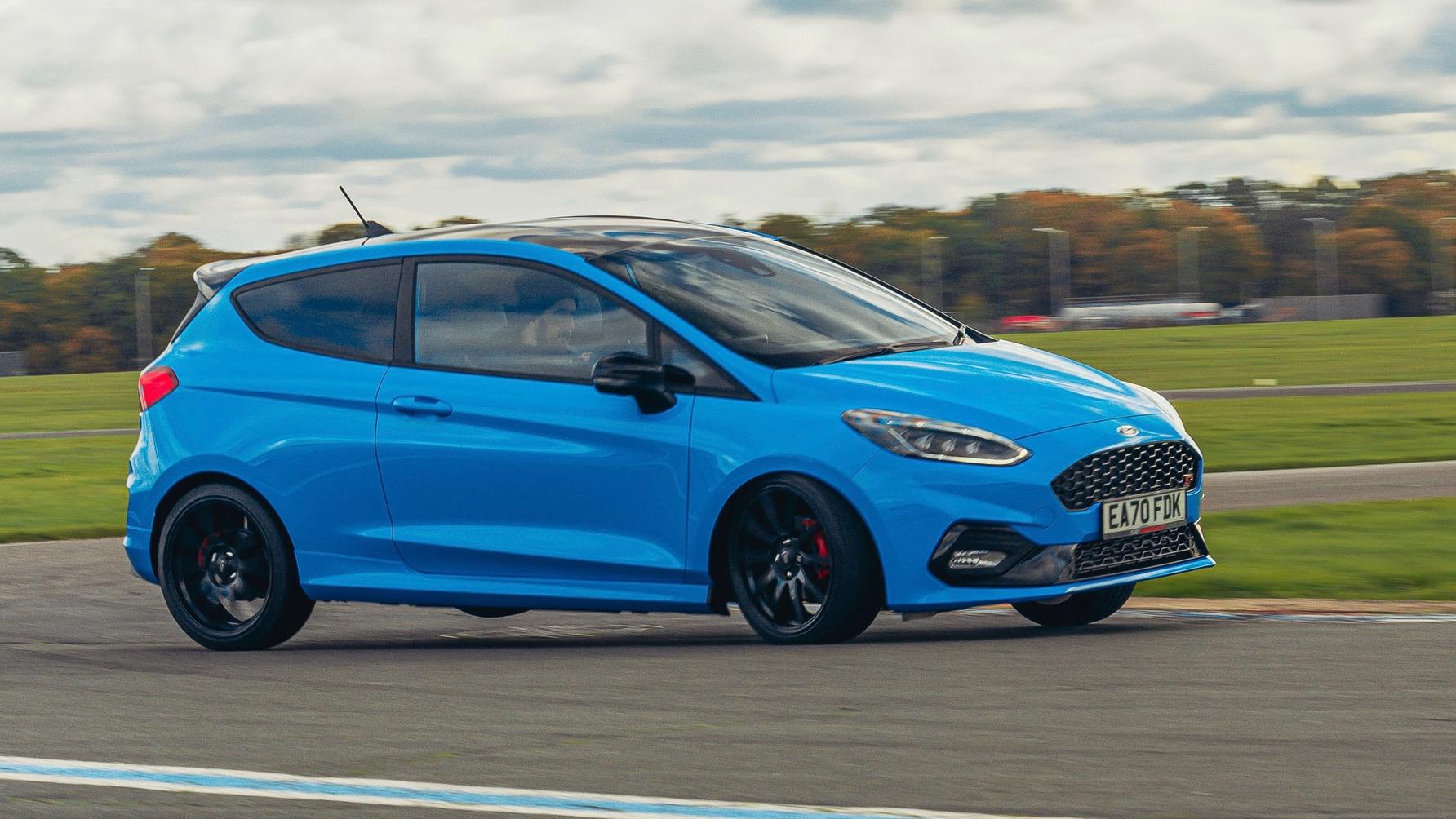 The slowest of our seven yes, but by no means a slug. This new Edition version of the Fiesta ST was 0.3secs faster from 0-60mph than the standard car, yet its 1.5-litre turbocharged triple has no more power (it’s still 197bhp and 214lb ft). Some of that improvement will have to do with conditions on the day, but some also comes from the fact that the stiffer springs of the Edition help reduce rearward weight transfer – vital for getting a front-drive hot hatch off the line fast.

But to put the Fiesta in context, it’s rapid enough to mostly keep pace up to 60mph, but above that the others pull away. For evidence look how long it took to get from 60mph to 100 – 9.43secs, when the next slowest, the Golf GTI dispatched that in 7.60secs. It doesn’t feel that much slower, though and that’s what’s actually important. The Fiesta is an eager, tenacious machine with a big heart.

It’s also got stronger brakes than the next two cars that nudged ahead of it. But then the 1,255kg Fiesta was also the lightest car here. 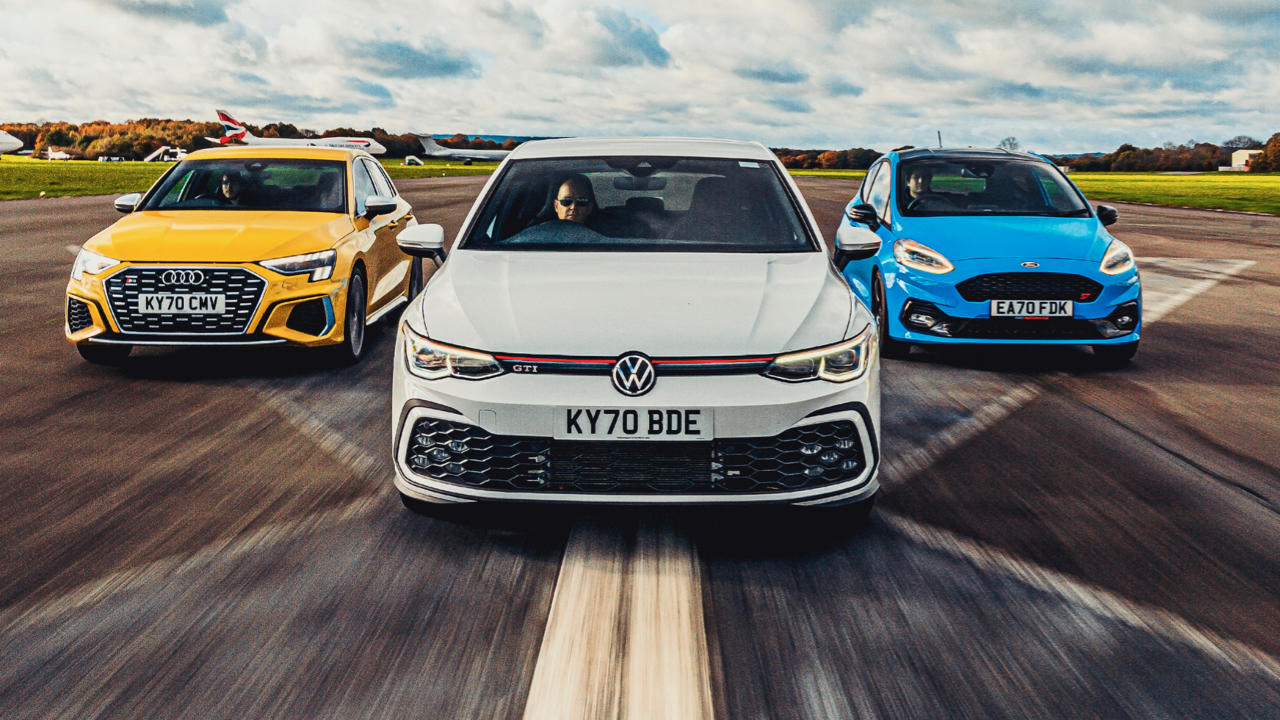 A strong performance for a regular Golf GTI – and much, much faster than Volkswagen’s 6.3-to-62mph claim. Traction is the key here, and not easily found. Feed the power in just right and you can get quick times.

But look how little separates the three similarly-sized front drivers. They’re covered by a 0.2sec bracket, with this the slowest, the Hyundai i30N the quickest and the Civic in the middle, even though there’s over 70bhp between least and most powerful. To 60mph power isn’t nearly as important as traction.

And a DSG gearbox. That saves you well over half a second to 60mph as well. A manual Golf GTI would be doing well to hit 60mph in 6.3secs.

Let’s start with the stopping, if only because both the i30N and Golf GTI took precisely the same time to stop, to the nearest hundredth of a second. Hyundai lost out, travelling an additional 17cm. Nicer brakes to use though, and much less dive.

Broadly speaking the same weight as the Golf GTI (both around 1450kg), the facelifted i30 put its extra 34bhp to good use, pulling out a 0.7secs lead by 100mph and going through the quarter mile barrier about 0.2secs ahead and travelling about 2mph faster. Small margins, but in a drag race they feel bigger. 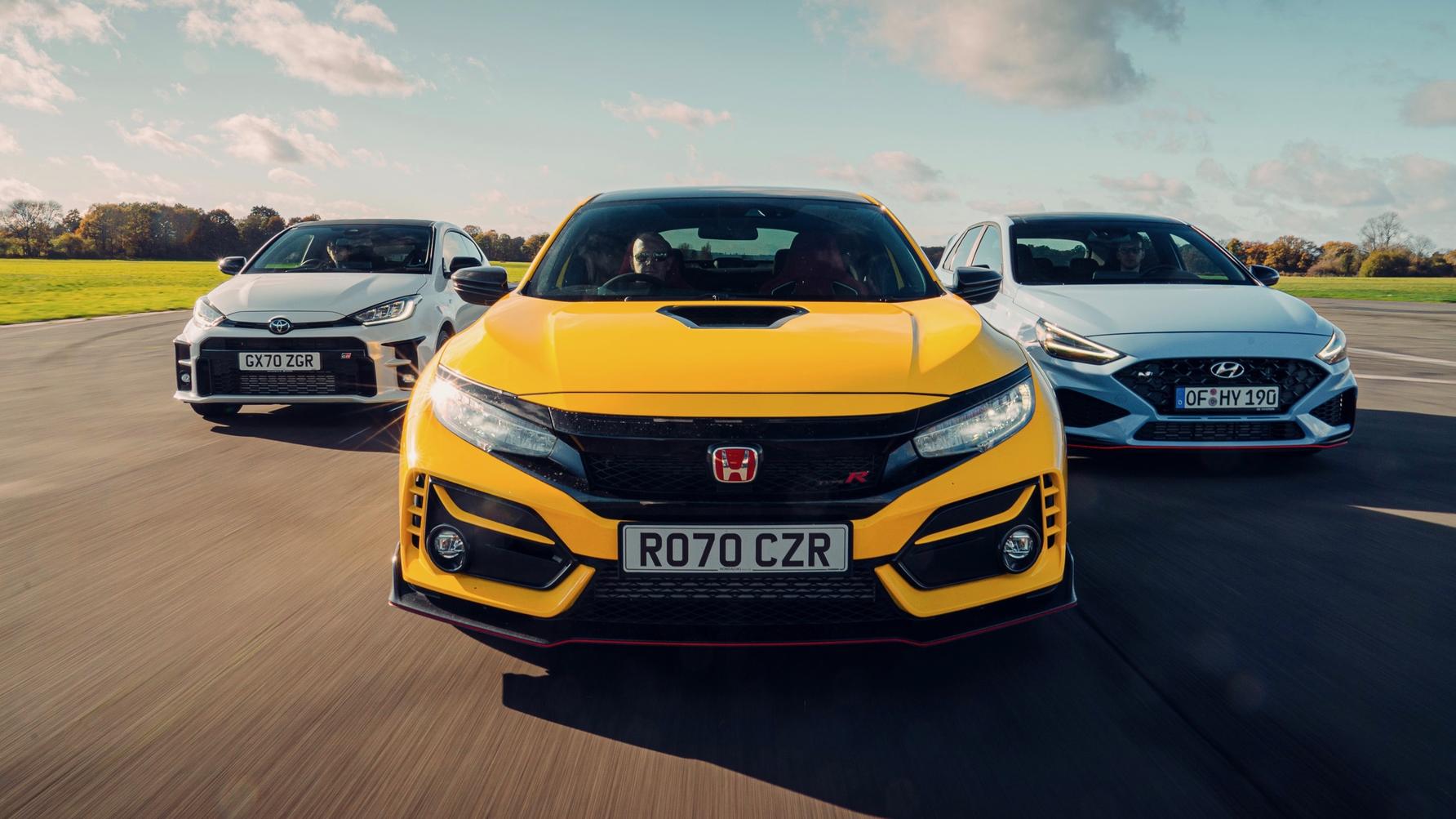 The Civic is a very fast car. The fastest front driver here. Which of course means it was never going to match the 4WD stuff off the line. But a 60-100mph time of 5.97secs is faster than everything bar the A45 – and doubly impressive when you remember you have to send a gearlever around a gate in the Type R.

What a ‘box this is though – I can’t think of a sweeter, faster shifting manual. And if you needed any further persuasion, it’s worth noting the S3 was half a second slower from 60-100mph and 2mph slower exiting the quarter. It got through there faster thanks to its initial advantage, but after that both it – and the GR Yaris – had to bow down to the Civic’s 233bhp/tonne power to weight ratio.

Back to the Civic. Because this one is the Limited Edition, of which only 20 are coming to the UK, it comes with Michelin Cup 2 track day tyres. Now they don’t make a huge difference in a straight line, but they possibly help initial traction a little, and stopping distance more.

I suspect that even on regular tyres the Type R would still have had the best brakes here – it’s ability to stop a car length shorter than most rivals may not sound like much when you’re travelling around 20 car lengths while stopping from 100mph, but inside you do notice its control and bite as you slow. 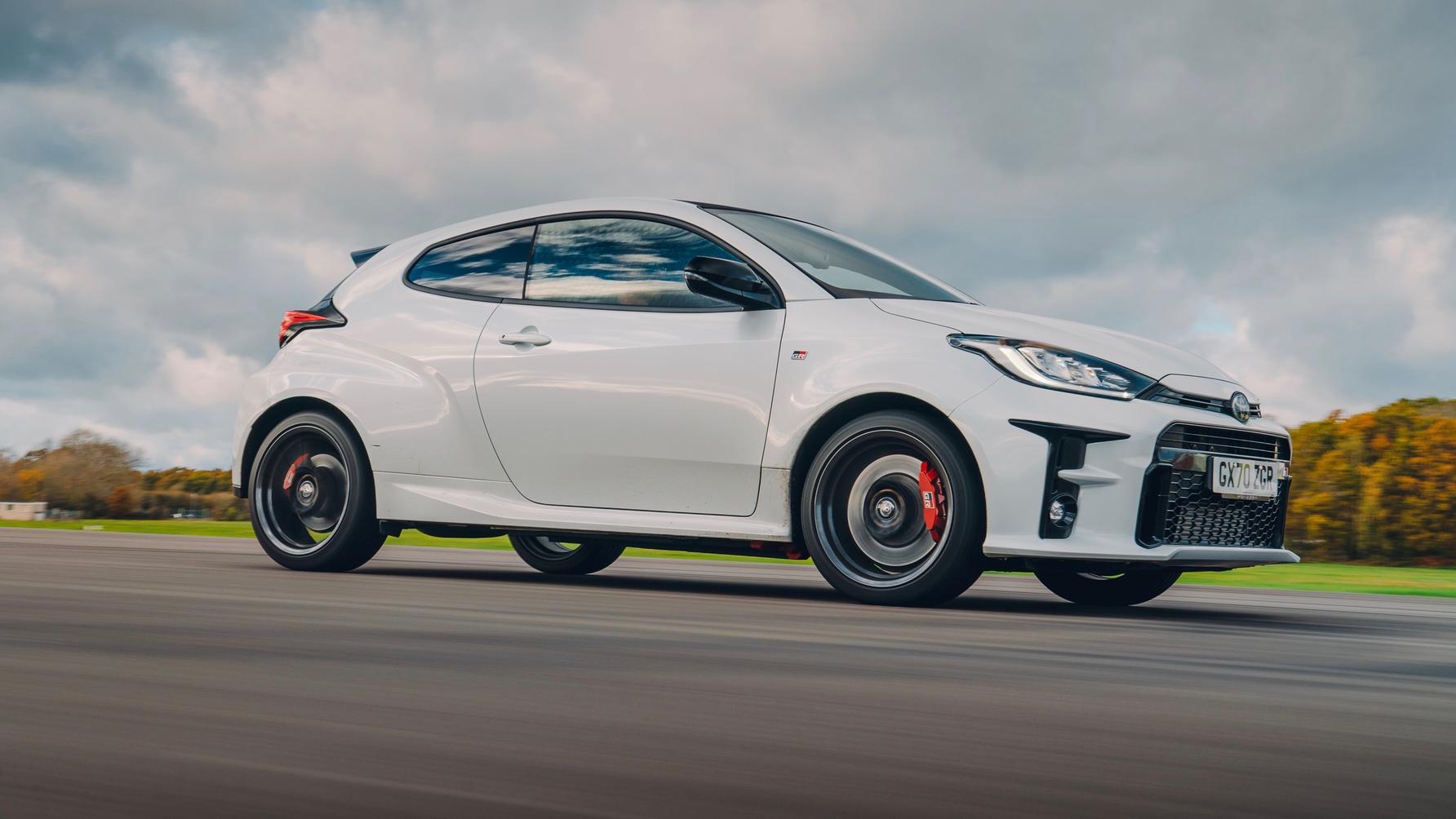 What an absolute scorcher this thing is off the line. Light weight, total traction: as long as you were prepared to be brutal with the clutch (I was), and discovered a little trick where you can hold the revs (I did), the GR Yaris takes off like a spooked celebrity. 4.64secs to 60mph when Toyota claims 5.5-to-62.

Up to 50mph the Audi S3, with its gentler launch control, could barely see which way the GR had gone. But then it slid another seamless DSG shift home, while the Yaris driver did battle with the notchy manual run from second to third, and lost its whole advantage and more.

Couldn’t care less, it’s not the numbers that make the Yaris fun. Although the off-the-line party trick is bloody amusing – I’d just like to point out that its 0-30mph time of 1.48secs is faster than an Audi TT RS, Ferrari 488 – or 488 Pista – Lambo Urus, Honda NSX, any McLaren 570, any Tesla Model 3 and the A45 S that’s the fastest thing here. Make no mistake, if you run up against one of these at a traffic light, be very afraid.

But by 90mph it’s pretty much cooked. Sure it’ll carry on angrily doing its best, but that broad face isn’t designed to slip through the air. Still, it hangs on to a notable victory over the Civic by getting itself across the quarter mile almost three-quarters of a second faster than the Honda. Nor did it disgrace itself under brakes.

Sport mode, press brakes, press throttle, release brakes, yawn, arrive at 100mph. That about sums up the Audi S3 experience. It’s very effective, but entirely uninvolving, requires no skill whatsoever and communicates very little excitement indeed. There’s a bit of a jolt as it leaves the line, otherwise nothing. Maybe a distant pop from the exhaust to mark each gearshift.

Brakes well, but this is such a by-the-numbers car that although rapid, it feels no faster than the Golf GTI. Which itself felt slower than the Fiesta ST. Enough said. 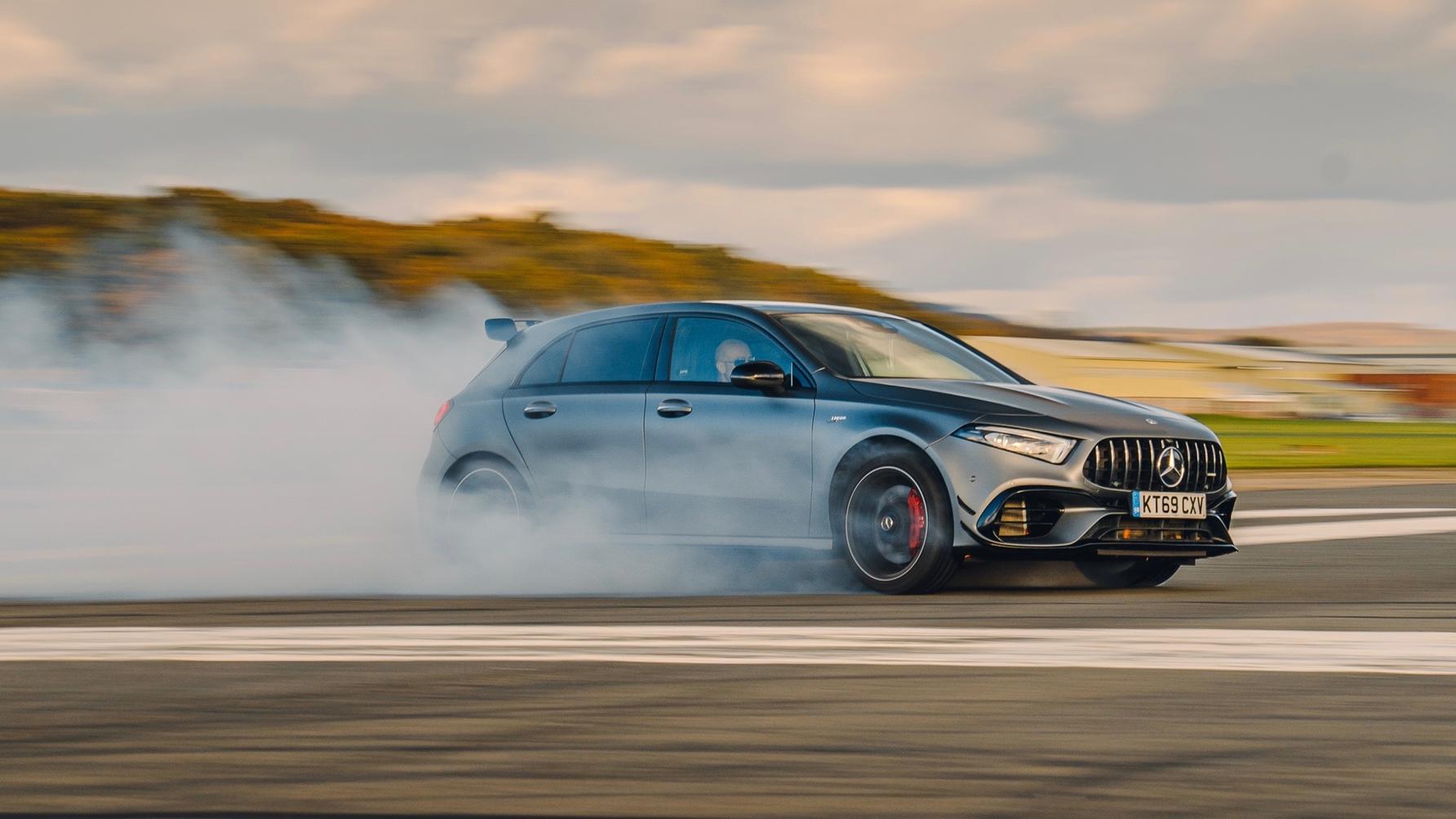 Here’s the other side of the Audi coin. Same basic 4WD, twin clutch layout, but a world away in terms of delivery. 415bhp from a 2.0-litre turbo, furiously dispatched through clutch and gearbox to astonishing effect. I know an RS3 will be along shortly, and doubtless have more power. But whether it will have the sheer energy of the A45 remains to be seen.

It has deeply impressive launch control and enough power to blitz the opposition as the speeds rise. I was impressed enough the Civic did 60-100 in under six. The A45 does it in under five. This is proper grown up speed, a league above hot hatches. Its 0-100mph time puts it on par with Audi RS5, the Aston DB11 and Jag’s 4WD F-Type SVR.

It’s priced unlike any hot hatch because it does speed unlike any other hot hatch. There’s not much we’ve tested that delivers this much quarter mile ability for this much money. Again, it’s as quick there as an Alfa Giulia QV, Aston Vantage, BMW M3 Comp, Porsche Panamera 4S and so on.

Compared to the Fiesta? Well, when the slowest car here passes 100mph, the Merc is doing 130mph. It’s another 3seconds before the ST reaches the end of the quarter and it’ll be going 20mph slower when it gets there. But like we always say, none of this matters because as the S3 (not to mention just about every electric car) proves, speed alone ain’t exciting.

But at least the AMG A45 S can claim a crown. It’s the fastest hot hatch of all.