This is a 600bhp Lamborghini-inspired V12 minibus taxi

Here’s a story of a humble project that unravelled into madness. Expensive madness

The Toyota Quantum (HiAce to everyone else around the world) is a staple part of South African automotive furniture. Mainly because it’s the nation’s taxi. But you – or any South African, for that matter – has never seen one as wild as this before. We give you the bright orange 600bhp Lamborghini-inspired Quantum with a twin-turbo V12 mounted in its belly! Well, most of it…

Where we plummy Brits have a black Hackney Carriage, the US has yellow Crown Vics and Morocco has ageing Mercs, South Africa has a high-sided panel van. They’re nearly always overcapacity and driven with no care for traffic regulations until the whitewall tyres are worn through. 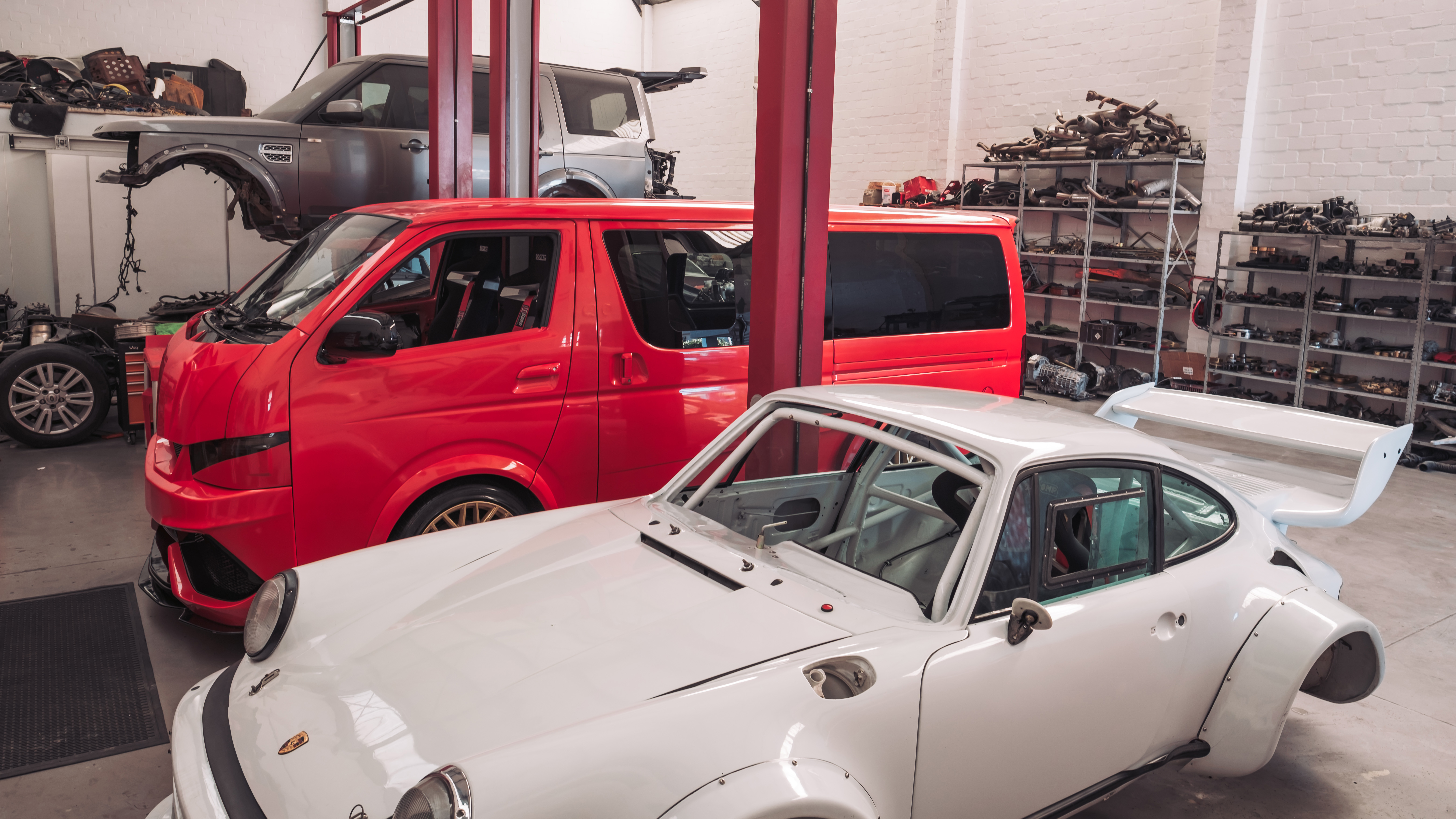 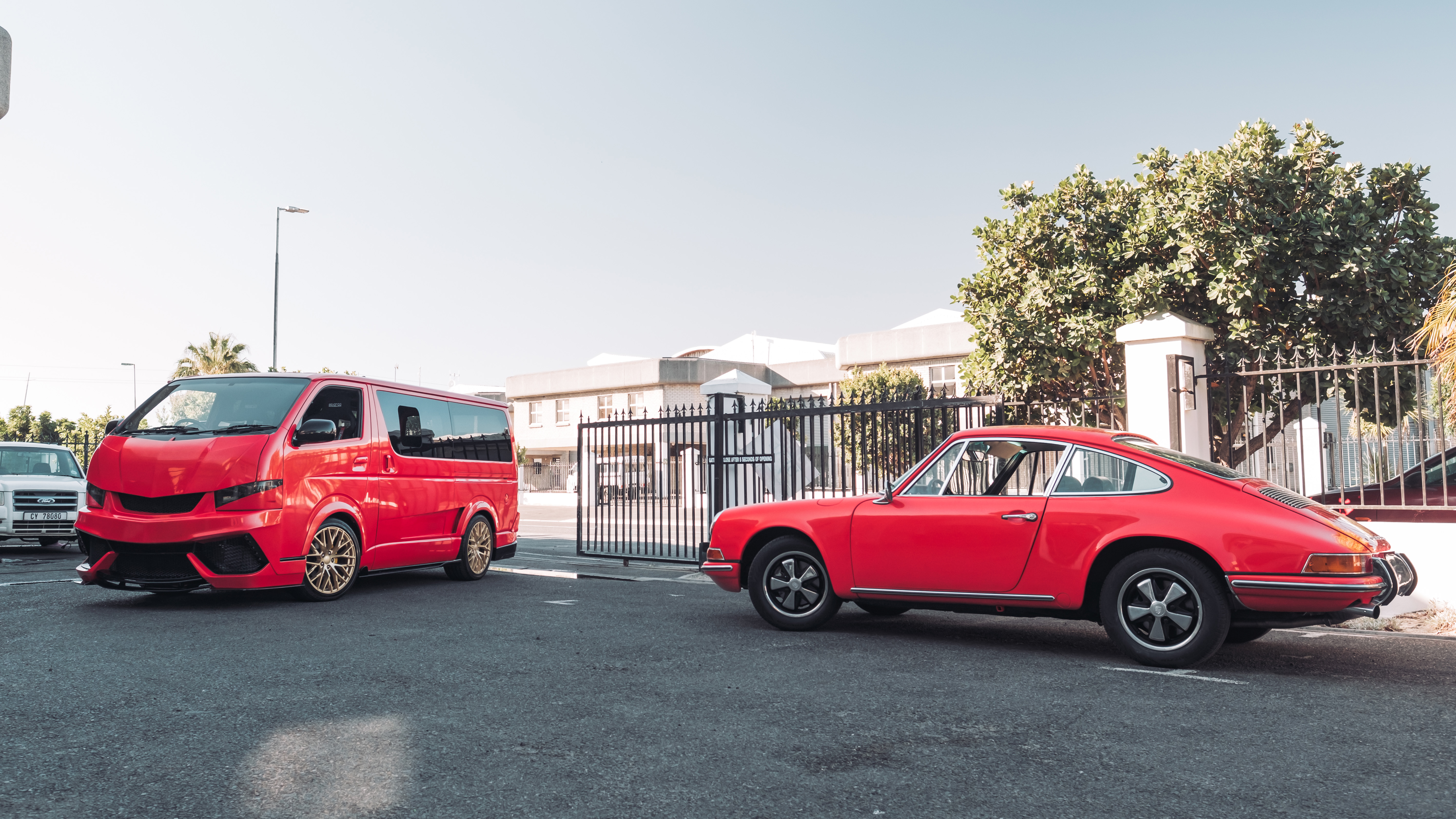 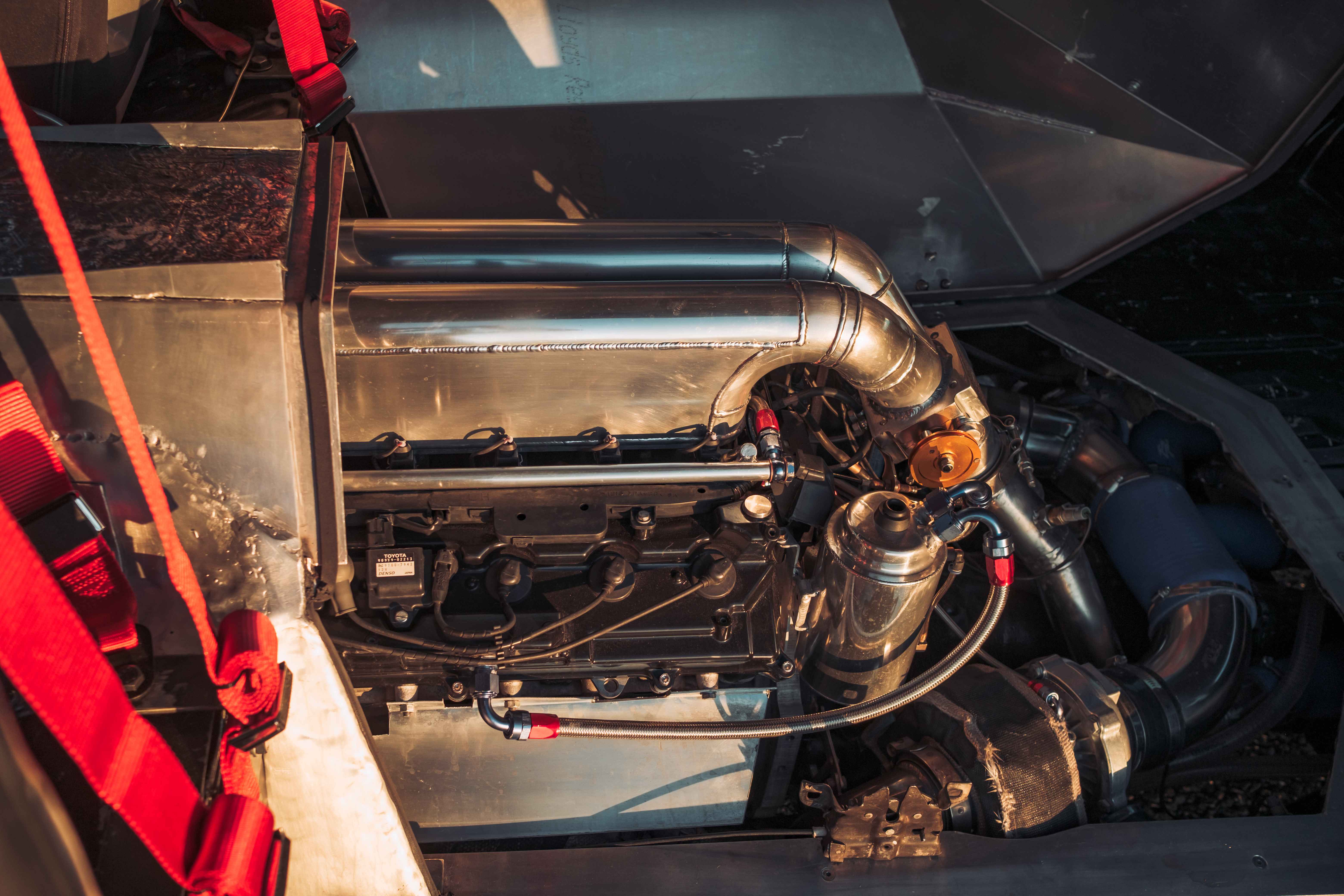 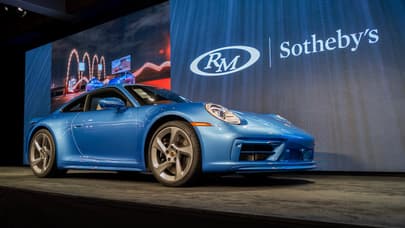 Remember that one-off Sally Carrera? It sold for $3.6m

Honestly, if you want to lose some time hiding behind your hands in fear and astonishment, YouTube ‘South African Taxi Compilations’ now. But this is what happens when one mad enthusiast decides to genetically modify a Quantum with the spirit and DNA of an Italian supercar.

The man and mind behind it – James Redelinghuys – isn’t afraid of a project. Every couple of years he commits himself to a build that pushes the boundaries. In the past, he’s tuned an ItalJet Dragster to be one of the world’s fastest scooters and sent a smart roadster to the outer atmosphere of engine tuning. But needing a way to promote his taxi and minibus rental business, he’s decided to make the maddest minivan Africa has ever seen. But also may have bitten off more than he can chew in the process.

Projects getting way out of hand isn’t a new narrative – Kevin McCloud has made a career out of it for Christ’s sake. But that doesn’t mean they’re any less gripping as a story. They have all the juicy components to keep you interested as ambition and overconfidence battle unforeseen problems and financial burdens. They’re always a tightrope tussle where problems are solved with more money, then more money, then more money, until triumph is achieved and they have what they strived for… even if it means they’ll be destitute, divorced and eating Dairylea Dunkers for dinner until they die.

“I thought it’d be simple,” James admits. “Unfortunately, it appears I’ve decided to take on one of the most difficult projects there is.”

The plan was simple: to make a badass Quantum. Using his brother’s mechanical expertise and Porsche restoration shop, in March 2017 he bought a standard 2.7-litre engine 158bhp Quantum. Being the same engine that’s in Toyota’s impenetrable Hilux, these things have been tuned a million times, so the plan was to put a massive turbo on it, increase the power and call it a day. But then James saw a bodykit online.

“There’s this company in Japan called S.A.D,” James says. “They do these amazing Lamborghini Aventador-style bodykits for HiAces. As soon as I saw it, I knew I had to have one.” This, compounded by James’ obsession with detail and MORE, is where things started to spiral.

After hiring a local Japanese translator to umpire the email exchanges between Cape Town and Tokyo, when the nearly £5k unpainted bodykit parts arrived James realised that the standard engine and brief wasn’t enough. So he thought 2JZ was the answer: easy to get hold of, easy to tune – easy win. But then in the middle of the night, he had another idea. 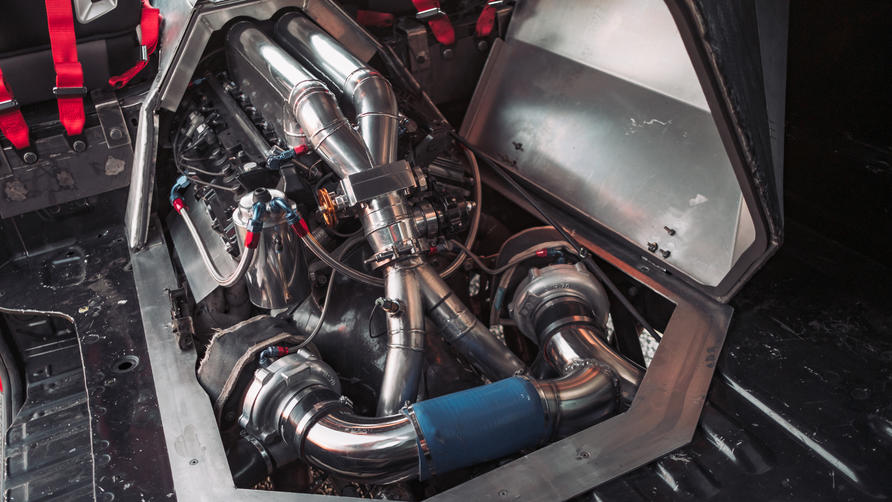 So he bought a 5.0-litre V12 from a Toyota Century, which just so happened to have washed up in Africa. Then he thought he’d turbo the hell out of it. But that wasn’t enough. So he then decided to twin-turbo it. See, James doesn’t do things by half measures. And weirdly compares his tuning philosophy to a liquid dinner.

“If you make a soup – it has to be a landscape of ingredients. You can’t have too much of one thing, everything must be in equal parts to float over your palette and be neutral. It’s the same with cars. You don’t want something that draws too much attention to one thing.”

As poetic as this is. It’s also madness. Because James may have everything in equal parts but every part is done on an extreme scale, it’s like a full English Breakfast where nothing has less than a seven-digit Scoville rating.

This is when the problems came. With all that space where passengers or trade pallets would go in the middle of the bus, they thought it’d simply be a case of cutting a hole in the middle of the floor and dropping the chassis over the big V12 like a dress. Not that simple. The prop shaft was a nightmare and is one of the shortest in the world – basically a stub of two couplings.

Then there was the engine itself. Or engines. James is on his third having blown two up on the dyno. He’s gone through four suspension setups (starting with double triangulated rear suspension that suffered from horrific diff steer on boost), now resorting back to leaf springs with coilovers all round. He’s also on his second diff, this time an LSD from a Mustang GT. He's even sprayed it three times, now going for a four-layer Xirallic Pearl that was six times the price of the original Aventador paint. And he’s still not happy with it.

When I arrive to go out in it the interior was a bag of oily bones. It doesn't exist yet as it's away being upholstered. When finished, it’ll be a black and red leather dungeon with four racing seats and a big V12 lump as a footrest – M5CS, eat your heart out. And like all great Grand Designs, this project has been refinanced many times. But as it owes him so much money, it’s already on Gumtree while still being built to try and recoup some funds. It’s a classic case of being too deep to give up. So he ploughs on. 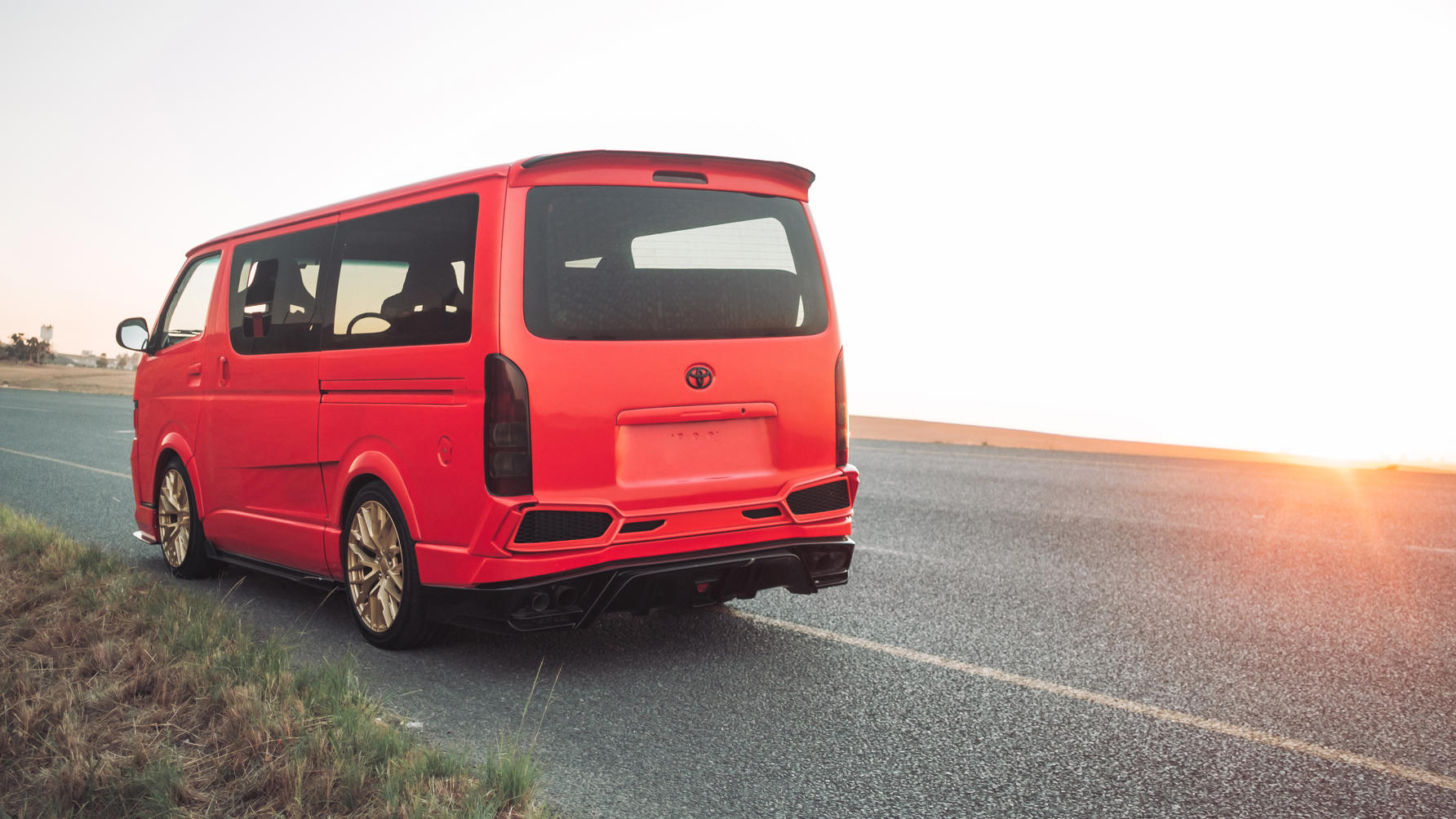 And it’s one hell of a taxi ride, that’s for sure. With 542bhp and 515lb-ft initially coming from that big 5.0-litre lump before the two turbos wake up and get the party bus moving, it builds its power like a diesel and then takes off when the boost hits before you grab the three-speed pistol grip gearbox and bang it in another gear.

It’s weirdly useable and hilarious when it gets into its stride, with the suspension offering more comfort than the dropped ride would have your eyes believe. And it stops. Which is a relief given they’re just the standard brakes. But being a panel van initially, they’re engineered for a three-ton payload and this is a lot less than that, so there’s no need to upgrade them. Which may be a rogue hair in that soup analogy.

Even though this crazy Quantum is your bank account’s nightmare, we need cars and projects like this in the world. They’re stupidly brilliant and nothing but unnecessary. But a 600bhp Lamborghini-inspired twin-turbo V12 minibus taxi needs to exist. Just because. There needs to be a new Uber category for this kind of thing. For those who dare to dream. We just can't wait to see it finished. If that ever happens. 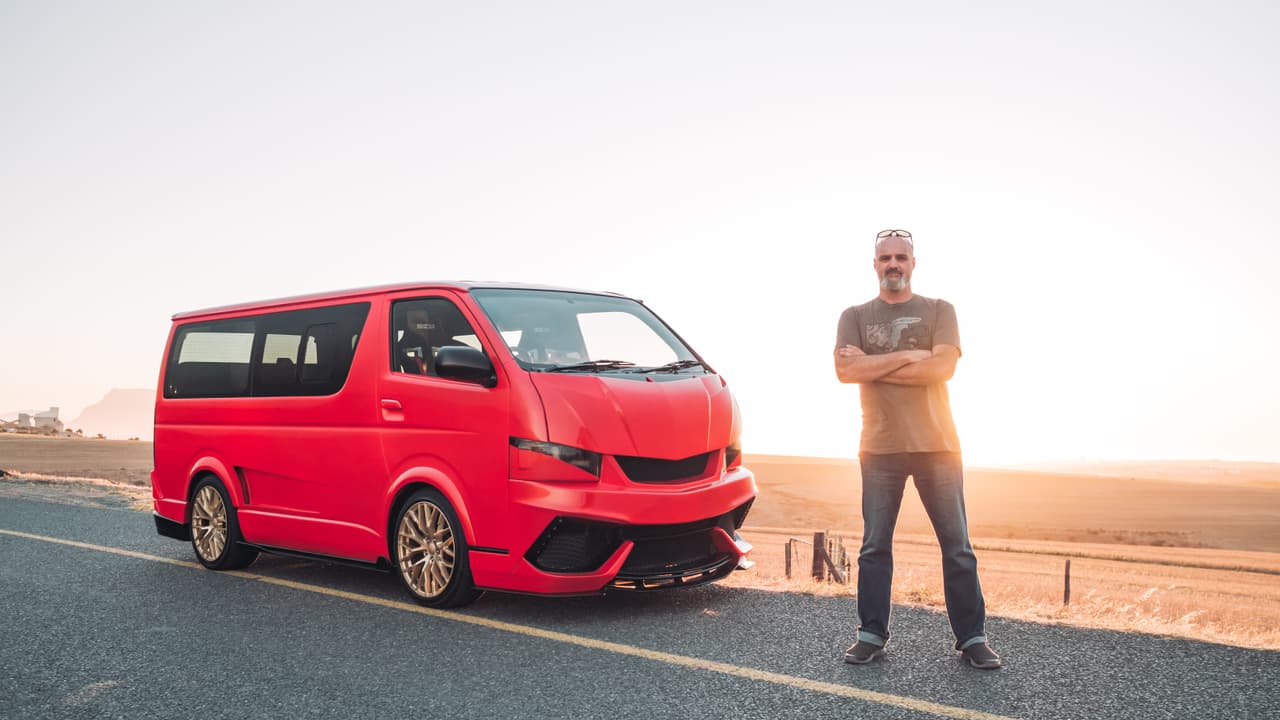