This is the all new Aston Martin Vantage

"This is our dedicated sports car. It’s simple, pure energy, it’s a hunter. It has a flick in the tail and the lowest nose we’ve ever produced. If the DB11 is a samurai sword, this is a scalpel.”

That’s design director Marek Reichman giving us a hands-on intro to the new Aston Martin Vantage. He’s fully spooled up now, arms flying everywhere, his language getting more design-speak by the second. I’ve pressed the pause button here, on his sword/scalpel analogy, not to point and laugh at some marketing guff, but because in truth it’s rather key.

We are witnessing the rebirth of a company, one that’s emerging from a decade where its products overlapped and leaked into one another like layers on a sub-standard trifle. Shored up with new money and new management, there’s now an ambitious plan in place that, should it work, will deliver seven new standalone models (one every nine months) between now and 2021 – and that’s not counting derivatives and cherries like the Valkyrie and continuation DB4 GTs. The first of these seven pillars is the DB11, the Vantage is number two followed by new Vanquish, DBX, a mid-engined supercar, Lagonda 1 and Lagonda 2. In that order.

Success hinges on differentiation – creating clear daylight between each pillar, and that’s precisely what’s happening here. Seen any DB11s painted in Radioactive Lime recently? Didn’t think so. And the Vantage’s official launch colour is just the beginning of the changes that make this the Aston for people who enjoy the art of driving fast. 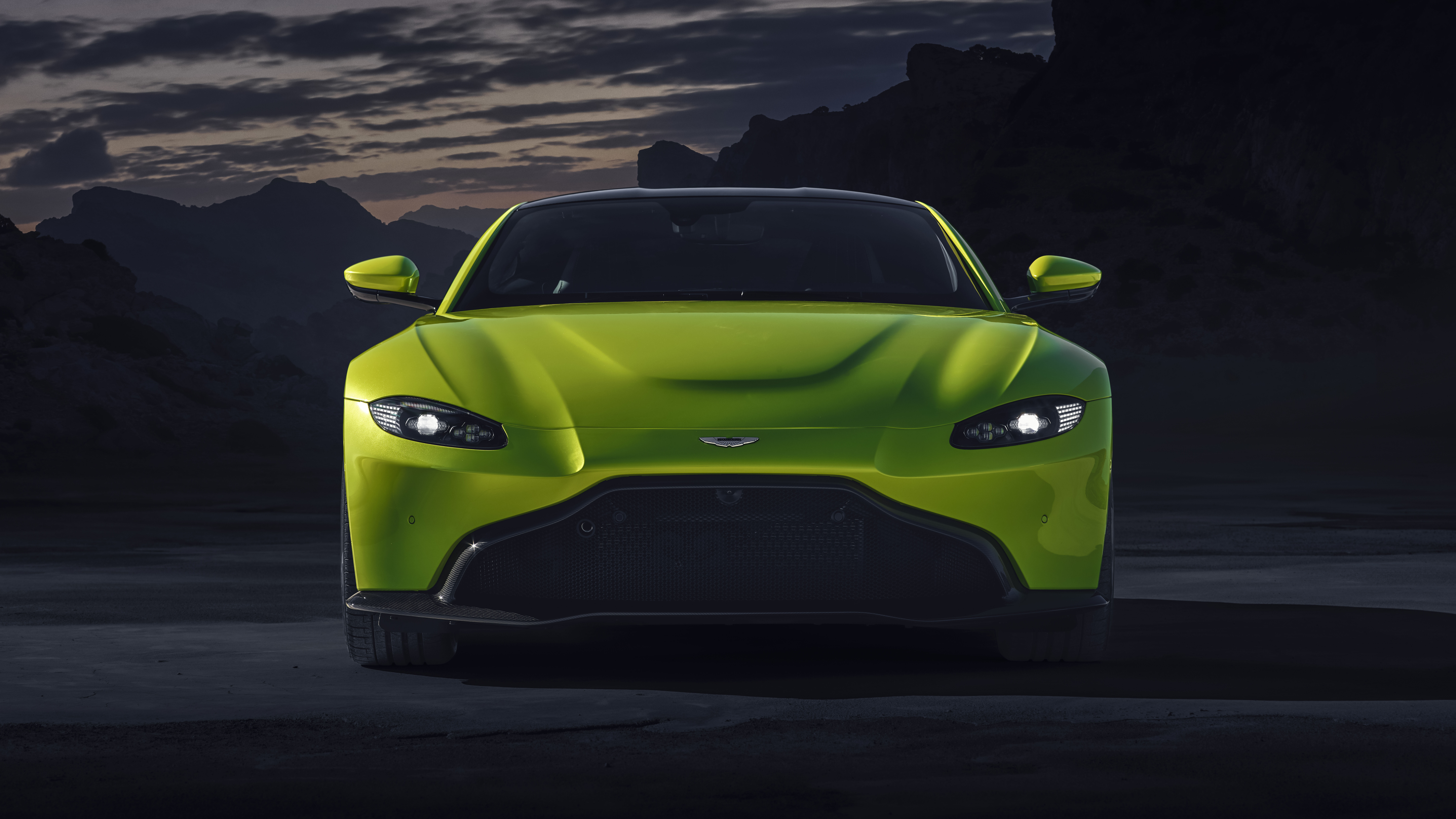 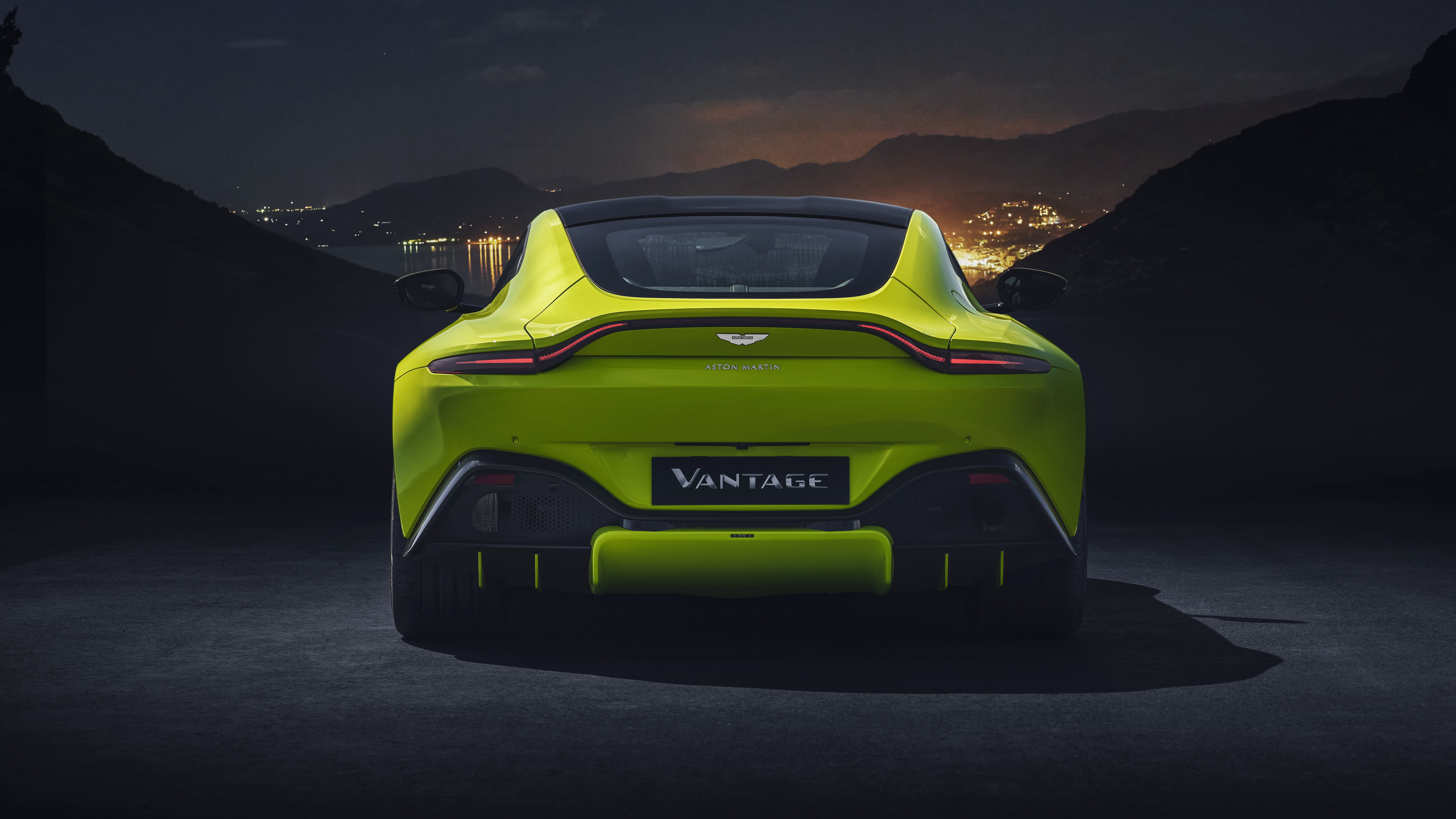 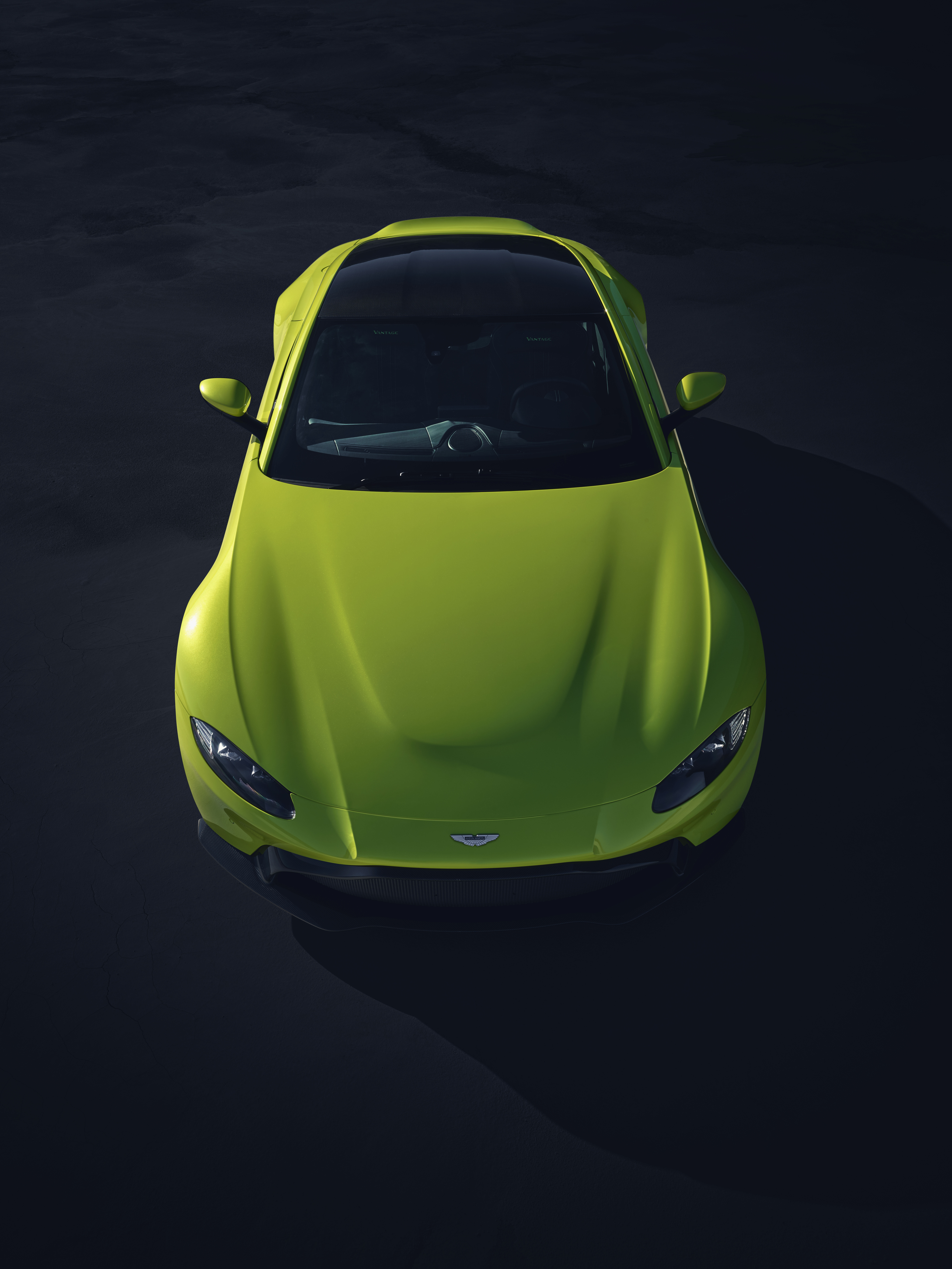 The bonded and riveted aluminium structure is, of course, descended from the DB11 – everything from the A-pillar forward is carried over untouched (new crash structures are prohibitively expensive to develop), but 70 per cent of the components are unique. A 280mm reduction in length is down to lopping out a section where the rear seats would be, while, unlike the plusher DB11, the rear axle sub-assembly ditches any rubber bushing and is solid-mounted to the chassis, sacrificing some refinement for more immediate reactions.

At 1,530kg dry, it’s 170kg lighter than a DB11, but, to be fair, that’s not saying much. More telling is that it’s a few kilos heavier than a 4WD Porsche 911 Turbo (Porsche quotes 1,595kg, but that’s with all its fluids on board, which weigh well over 100kg). Expect the kerbweight to lighten up a bit in a year’s time, though: that’s when you’ll have the option of substituting the eight-speed ZF auto available from launch, with a manual. Happy days.

The engine? We know it well, but that doesn’t make an AMG-sourced 4.0-litre twin-turbo V8, recalibrated by Aston to produce 503bhp and 505lb ft of torque, any less titillating. Claimed performance – 0–62mph in 3.6secs and 195mph flat-out – is nudging supercar country, but then so too is the starting price of £120,900. For £20k more, you can have a Mercedes-AMG GT R.

This is the first Aston to be completely set up by their ex-Lotus ride and handling chief, Matt Becker… and it’s his kind of car

Fortunately, the Vantage’s chassis game is strong. Double-wishbone suspension at the front and multi-link at the rear is familiar stuff, as are the adjustable dampers all-round as standard and torque-vectoring by braking. But this is the first Aston to feature a new e-diff that trumps a purely mechanical LSD, Aston says, by going from fully open to 100 per cent locked in a just a few milliseconds.

There is much technology at work, then, but this is also the first Aston to be completely set up by their ex-Lotus ride and handling chief, Matt Becker… and it’s his kind of car. The DB11 he tidied up, filed the edges; here, he was given carte blanche and a dream package to work with. Matt, we’re expecting big things.

But driving it is for another day. Now, I’m tracing Reichman’s steps as he stalks his way around the car, index finger on chin, as if he’s still finding new and exciting angles on his work. “This project was really like taking a racecar onto the road, so we needed a different language. It’s purer, it’s more elemental.”

Success
Skip 10 photos in the image carousel and continue reading 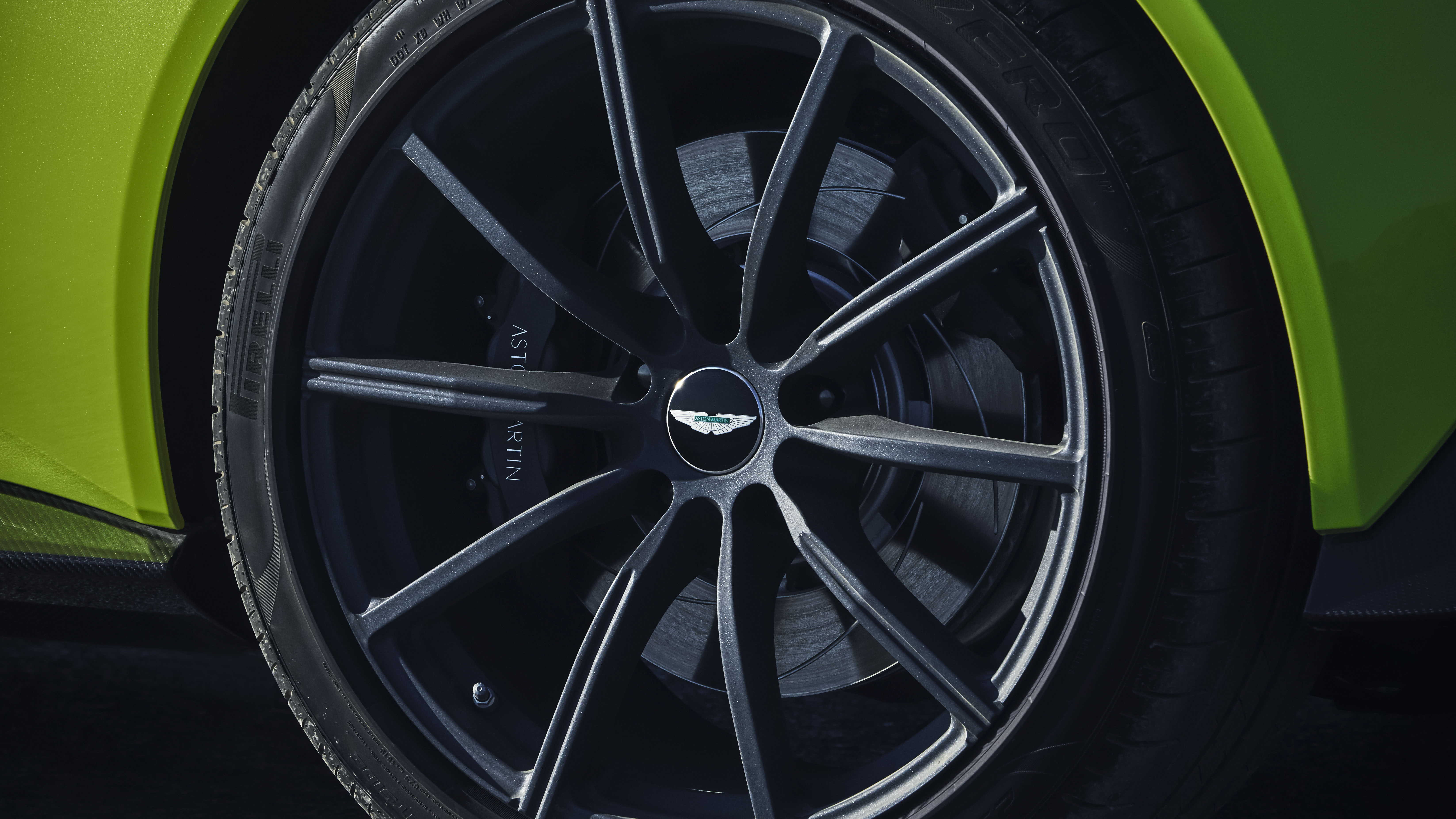 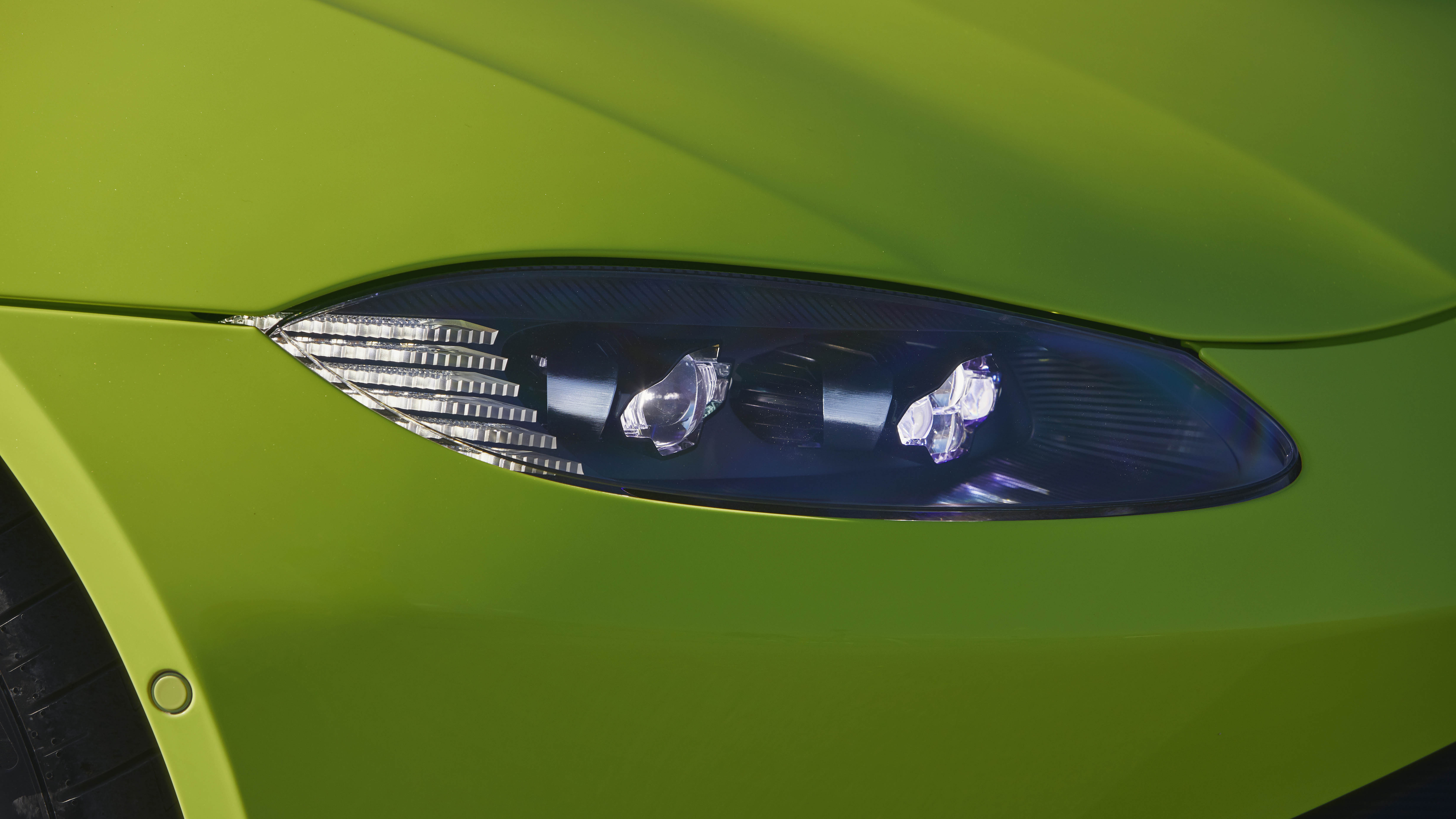 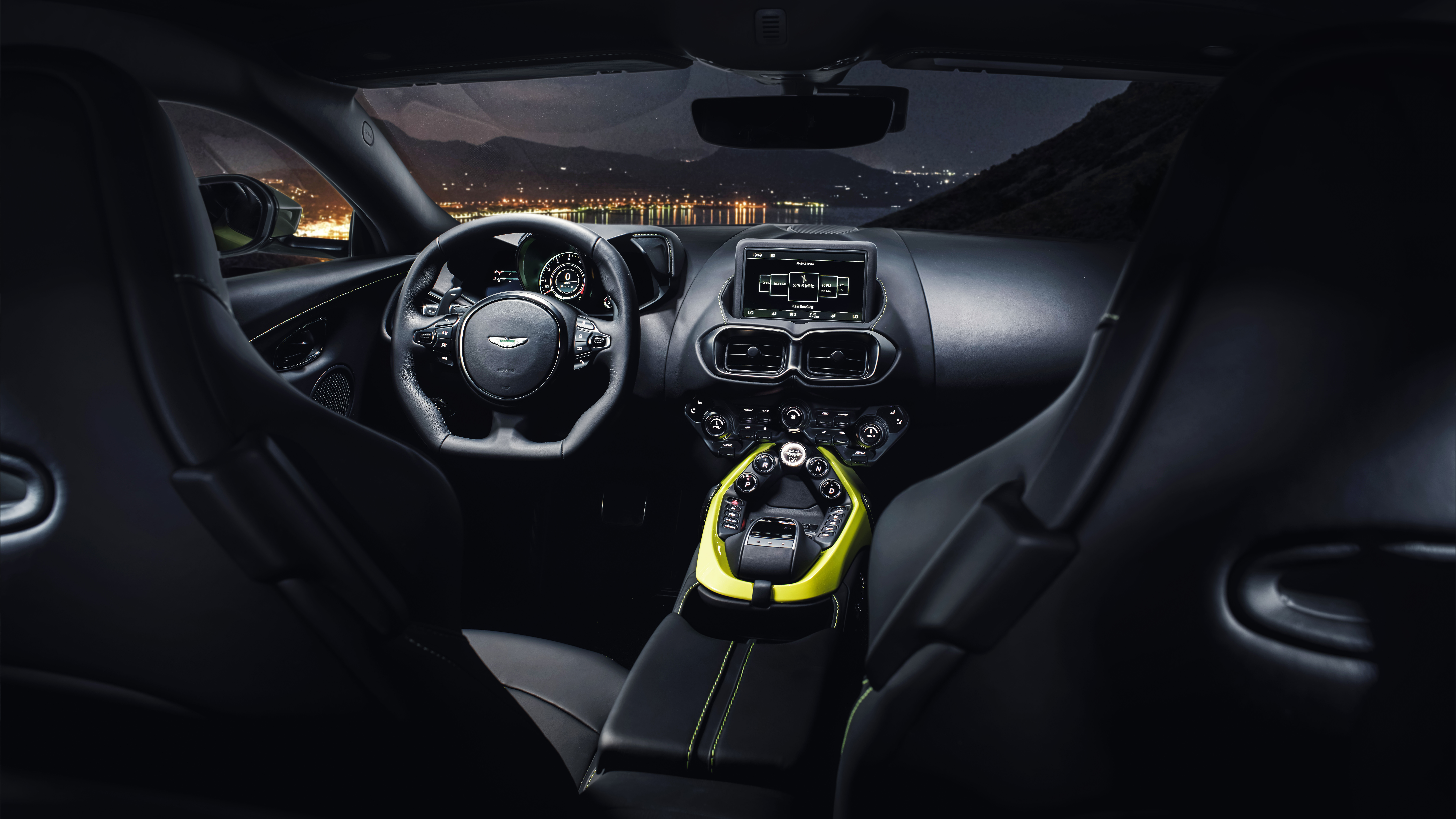 Starting from the front – the nose has Bond’s DB10 written all over it; the lights are small and aggressive with a front splitter below smuggling smooth air under the car. The front flanks are defined by ‘side gills’ riddled with bullet holes, while the back wheels are stretched to the rearmost corners where they punch through the car’s skin.

Right around the back, you’ll find the real drama, with a full-width light strip, uncapped exhausts sticking out like sawn-off shotguns and a proper functioning diffuser. There’s nothing active here. No flaps or air curtains, just a flat underfloor and a ducktail spoiler, more for stability than big downforce – that’ll come later with the hardcore AMR editions.

Normally, we prefer to leave the design decisions to your eyes (who are we to tell you what does and doesn’t look good?), but on this occasion, I’ll allow myself an opinion… it’s taut, exciting and exotic in a way a 911 doesn’t want to be and an F-Type can’t be. With one caveat – like the DB11 it’s very spec dependent. This car is an all-screaming, all-raving version with carbon roof, carbon sills and carbon diffuser, and it’s the one to go for. If you want subdued, go for the DB11, although we’ll understand if you want to tone down the paint.

This does define our core more than a DB11. If DB11 is about style, this is about developing something you can take racing

Inside, you can see the bits borrowed from Merc (screen, pointless mouse-style touchpad), but the good news is it’s a complete rethink from the DB11. Feeling fruity? You can have your centre console caked in body-coloured bits, or carbon or piano black if you’re feeling less shouty.

Gone are the DB11’s haptic feedback surfaces, replaced with physical buttons because “given the more frenetic driving experience, you want an actual click to tell you a button’s been pressed,” says Reichman. The paddles have grown for the same reason. There’s a bit of a boot, too – 350 litres, to be precise... more than double what you get in a 911’s nose, but then that has back seats for your overflow.

Will there be a V12 version? We hope so, but Reichman wouldn’t confirm, preferring to stir the speculation pot by reminding us that the engine bay is shared with the DB11. So we know it’ll fit and why go to the bother of developing a new twin-turbo V12 if you’re not going to spread the costs? Besides, knowing CEO Andy Palmer, the idea of a V12 hot rod will be too tempting to resist.

But will it be the Vantage or the DB11 at the heart of this born-again company? It’s a question that leaves Reichman a bit stumped… “I think, maybe this does define our core more than a DB11. If DB11 is about style, this is about developing something you can take racing, and that’s what Aston stands for. When they all line up at Le Mans next year, it will be this next to Porsche, Ferrari, Ford and BMW. We want to win with this car.” 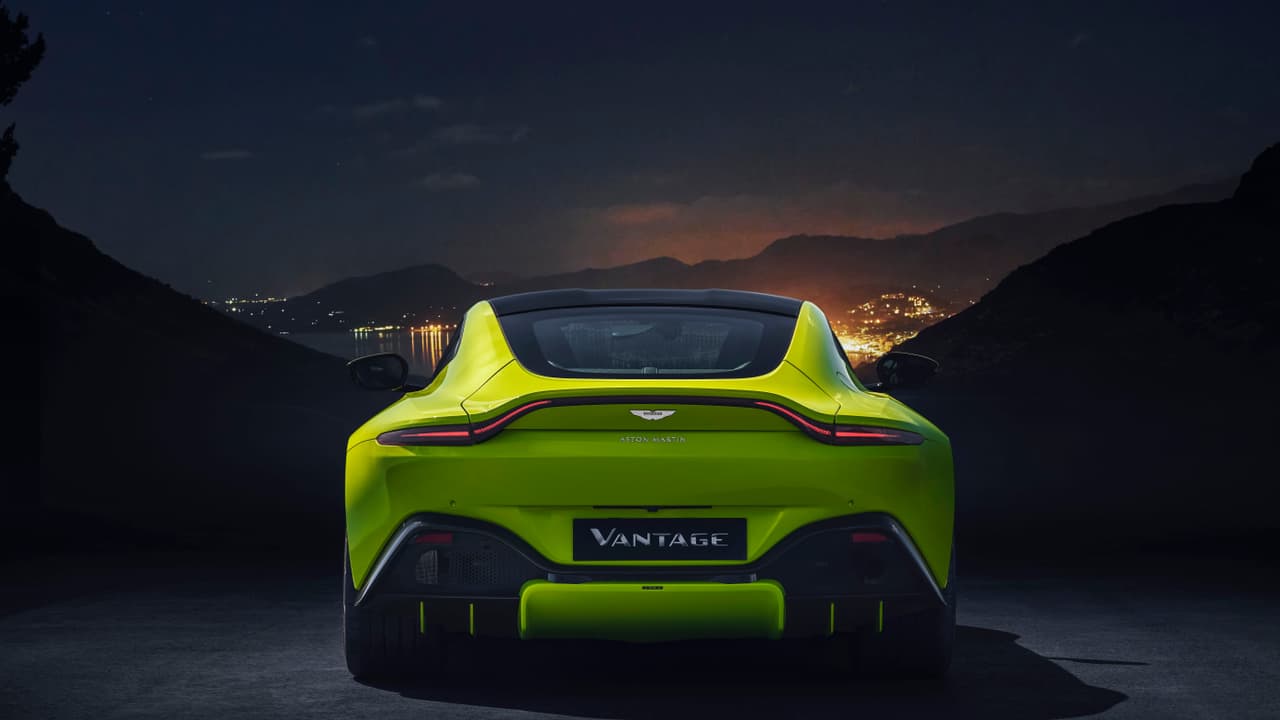