From the archives: the Lamborghini Murciélago LP640 vs the C6 Corvette ZR1 | Top Gear
Advertisement
Supercars

From the archives: the Lamborghini Murciélago LP640 vs the C6 Corvette ZR1

A heavyweight supercar showdown from back in 2009. But which came out on top in this battle of Italy vs America?

For the Italians in this duel, it’s like a night at the opera. All the showiness and drama of La Scala. Huge cast, elaborate costumes, deep lungs, music by Puccini or Verdi. For the Americans, it’s the straight-forwardness of a four-piece guitar band. Maybe The Killers. (Or are The Killers a bad choice of analogy? – ‘Are We Human or Are We Dancer?’ Not so very straightforward really. ‘I’ve Got Soul But I’m Not a Soldier’ Huh? It was re-imagined by Bill Bailey as ‘I’ve Got Ham But I’m Not a Hamster’. Anyway, I digress.)

The Murciélago LP640 and Corvette ZR1 couldn’t be more different. To their fans, both hold an extraordinary power to captivate and move. Both camps find the other a bit pointless. 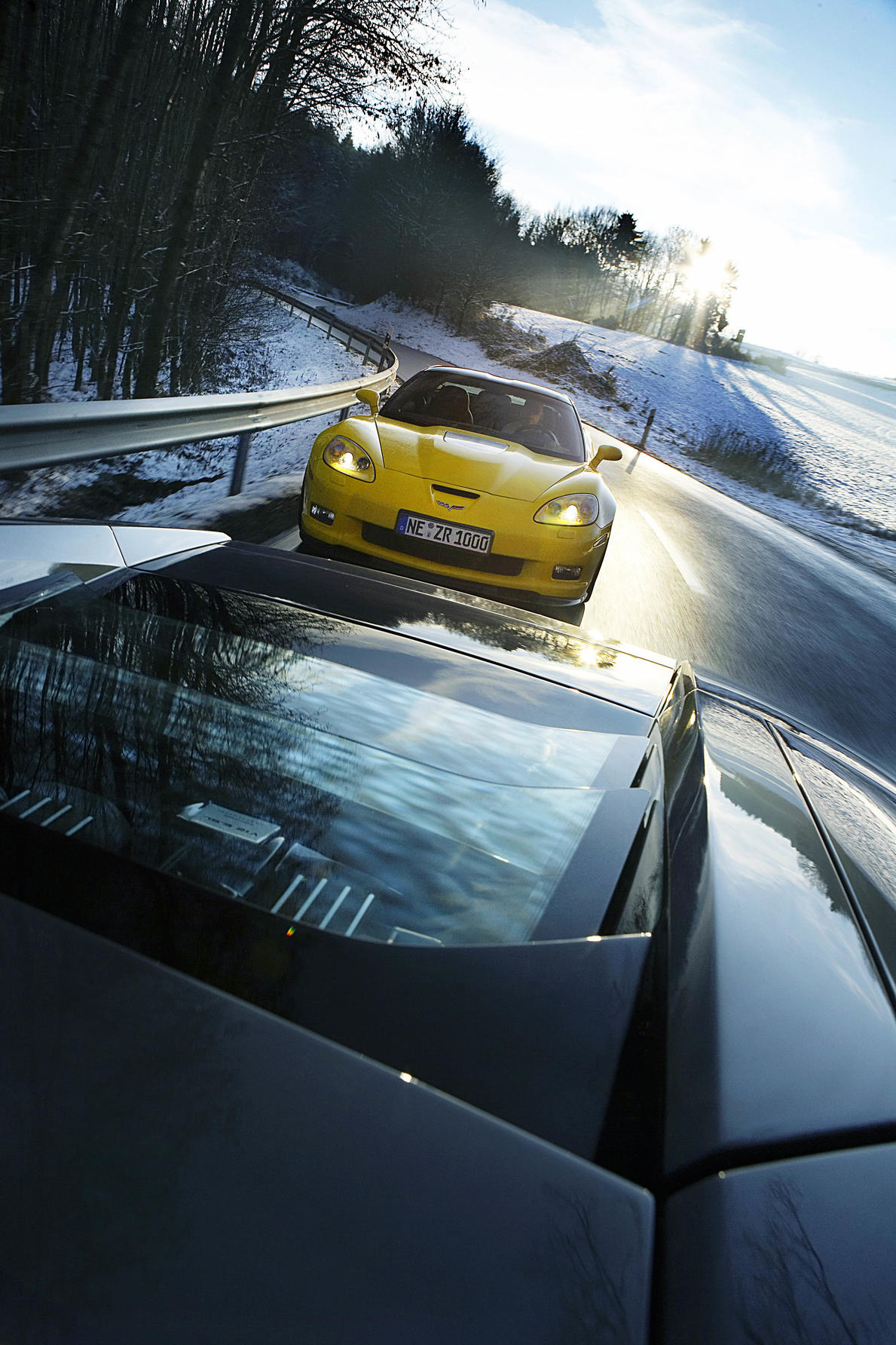 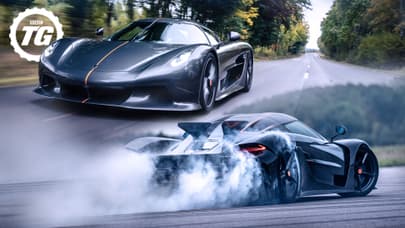 Pointless? How in the blue blazes can any 200mph car be pointless? For the Corvette crowd, it’s the attention-seeking cantankerousness of the Lambo that undermines it. Their beloved American idol is so easy to live with, you can use it all the time. That way, you can enjoy its pulverising acceleration and face-bending cornering whenever the opportunity presents itself. From the Corvette side of the fence, the Murciélago is such a demanding luvvy that you might just be tempted to leave the thing at home.

But to fans of the Lamborghini, that’s the entire point of a Murciélago. Yes it asks an awful lot of you, and yes it makes a savage impression wherever it goes. It is a rolling event, a special occasion car, and you should feel privileged to be a part of the whole hysterical performance. If you can’t stand the heat, get out of la cucina.

Of course, the Murciélago LP640 and the Corvette ZR1 do have something in common, and that’s the reason we’ve brought them together: their huge power and hallucinatory speed. Let’s get those astonishing figures out of the way, just to establish their bone fides.

Not so very far apart eh? 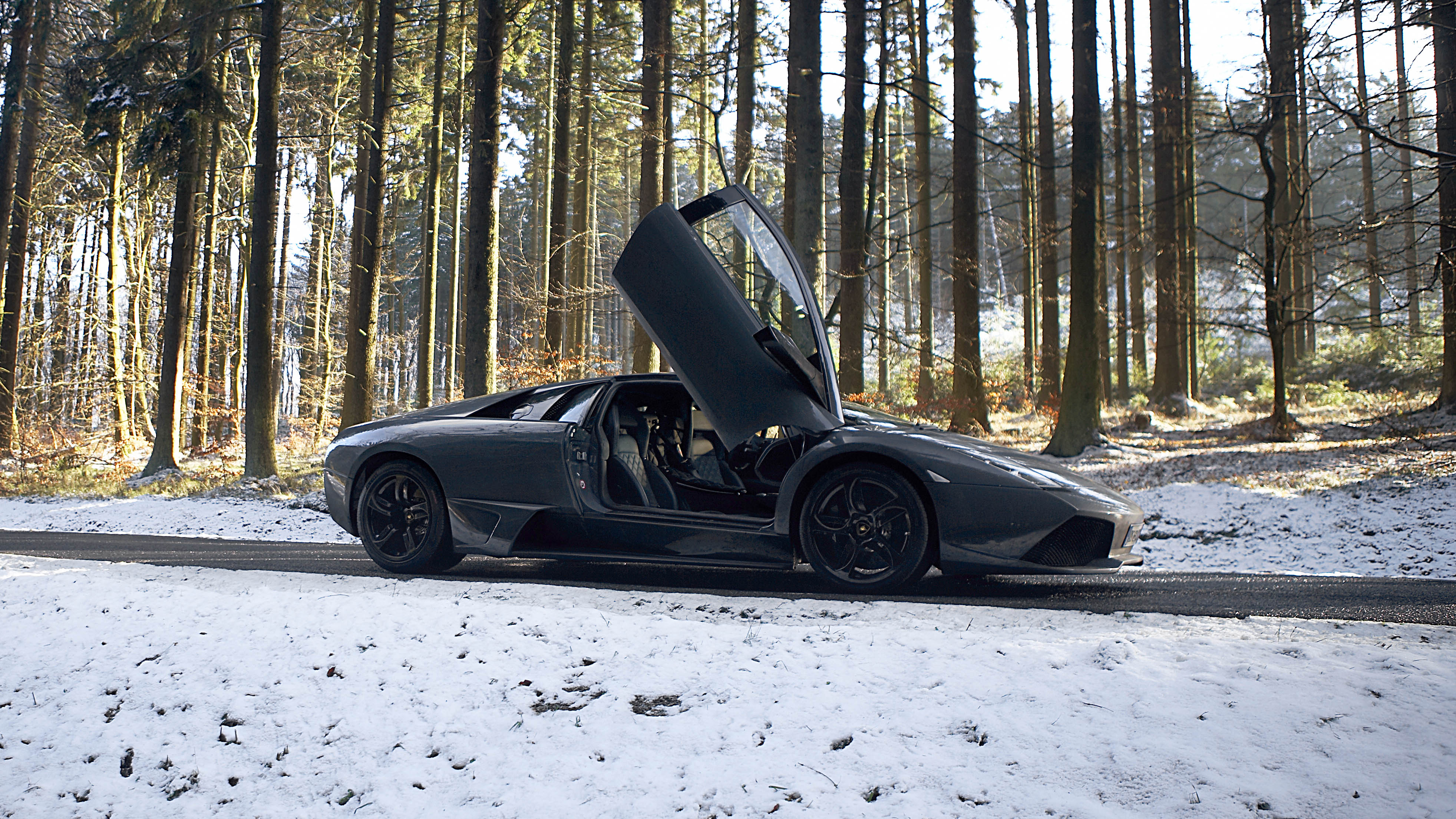 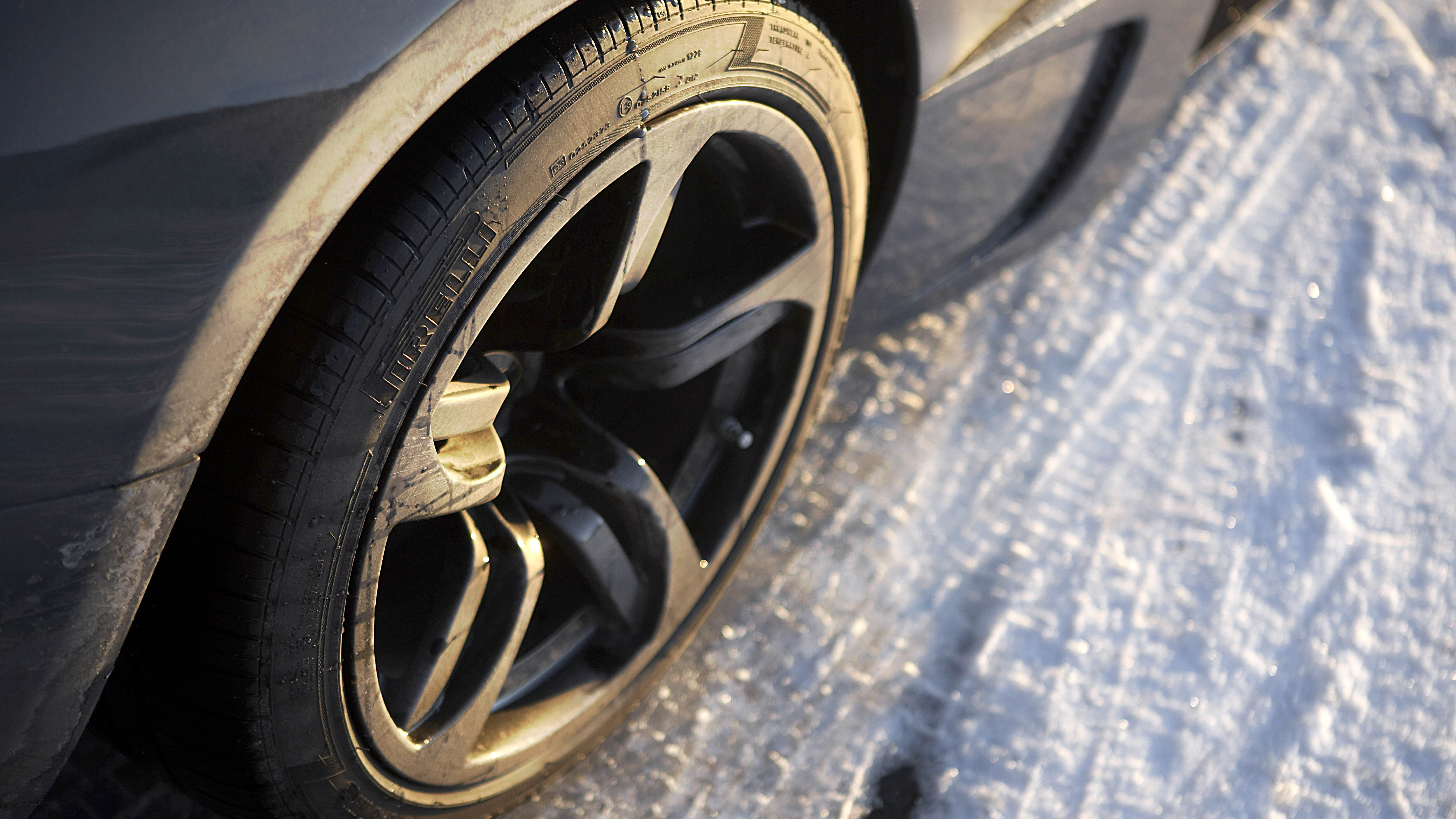 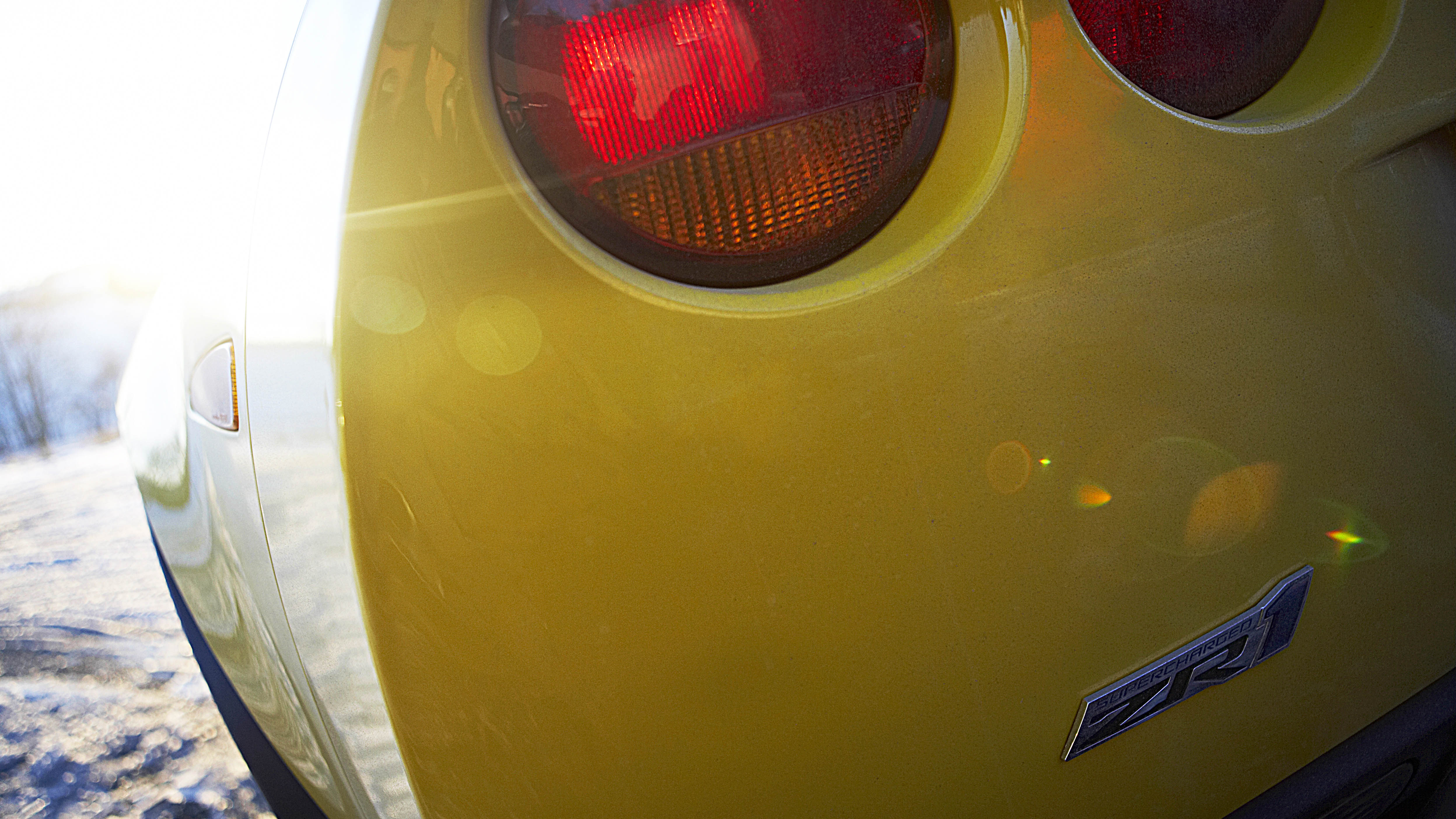 But look at the differences. The Lambo has a mid-mounted normally aspirated V12, four-wheel drive and a flappy paddle transmission. The Corvette has a front-engined supercharged V8 driving the rear wheels. It might be slower away from rest while its 335-section tyres spin like Catherine wheels, but real-world acceleration is a different matter because it’s some 150kg lighter than the Lambo.

Mind you, none of those technical differences goes even one per cent of the way to illustrating the real difference between these two cars. They just don’t begin to explain the straightforwardness and sheer pragmatic approachability of the Corvette, or the outrageously demanding and domineering nature of the Lamborghini.

Just to climb into the Lambo is a palaver. The door swings up, you drop down into the strange skeletal seat, you pull down the door and the seat belt comes down from your inboard shoulder. The steering wheel is somewhere between your knees, your head bumps against the top of the door, you can’t see to reverse unless you’ve specified the optional £2,585 chuff-cam. Basically, Lambo made space for the engine and transmission and wheels, styled a bizarrely dramatic shape to drape over them, and then chiselled out a small and inconvenient space for the person who’s paying for it all and his or her probably slightly terrified companion.

The Corvette is, well, a car. Open the door, sit inside. Everything’s where you’d expect it to be, including your luggage which simply goes in through the hatchback. You can see out. You can understand it all. The ride’s not too punishing, and at normal speeds it isn’t too noisy. The gearbox is slow, but none of the controls are heavy. The ZR1 is a ridiculously easy car to use in the ho-hum of everyday driving. The Lambo is anything but. It sets you on edge, what with its slightly bolshie e-gear transmission and colossal width and minimal ground clearance and ear-bleeding noise. 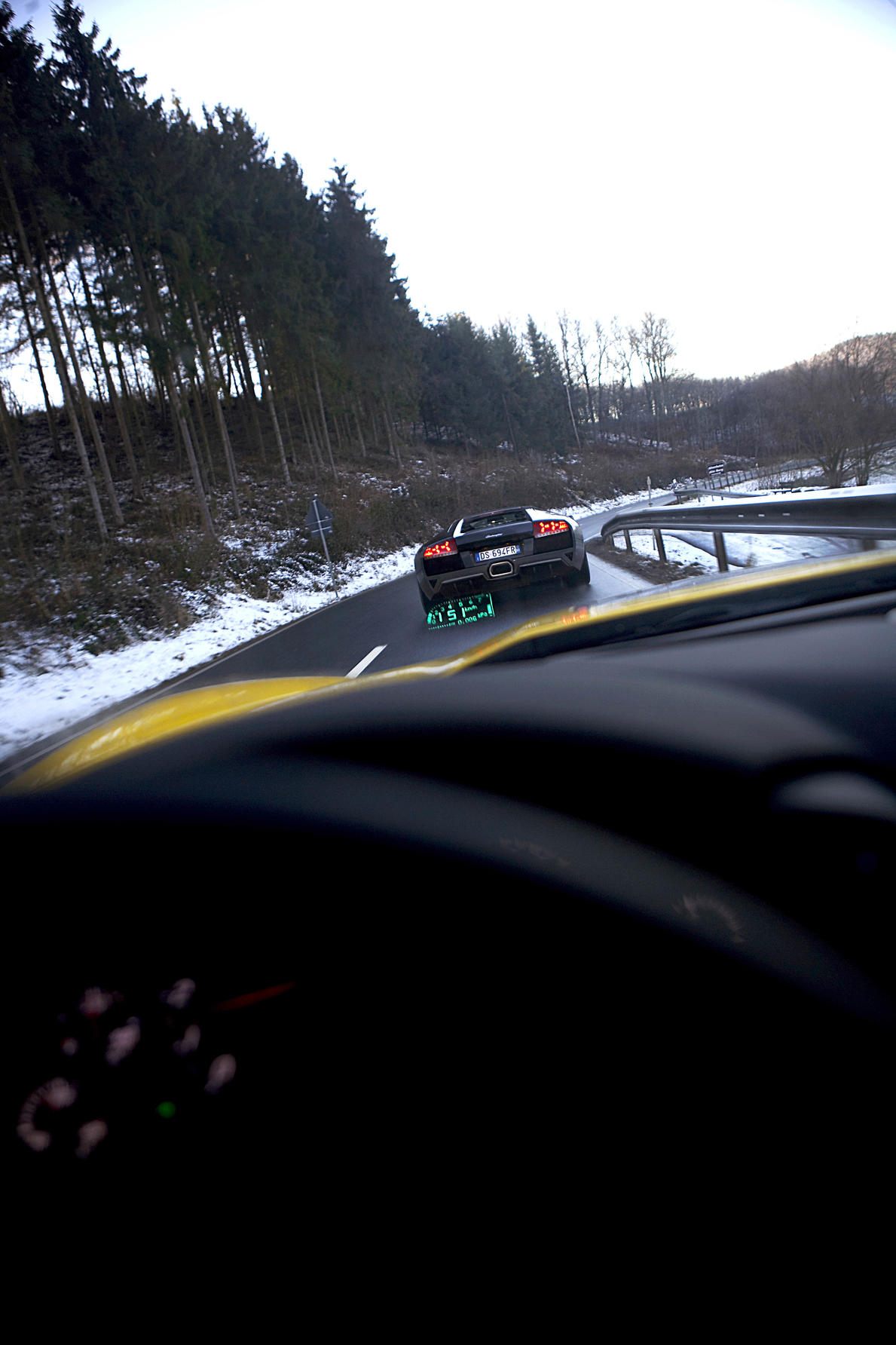 If you have the exuberance to match its limitless craziness, the Murciélago is a source of wonder that never dims. If you simply want to nip around the corner and park without drawing a crowd, it’s an embarrassment. As you manoeuvre into place, all fizzing V12 tailpipe racket and smell of burning clutch, then open the scissor door and stumble inelegantly out, a hundred pairs of eyes are questioning your reproductive endowment and wondering if you’re in the grip of a compensatory imperative.

The ZR1’s great trick is in managing to be so outrageously fast and such an inspired drive that it calls into question the drama of the Murciélago. If a car can go as hard as this easy-going ZR1, why on earth does the Lambo need to be so intimidating? The Corvette poses a nagging question about the Murciélago: at the centre of this Italian bluster, is there a hollow, false heart?

No. Categorically, there is not. The Lambo absolutely has the trousers to match its mouth. The engine, for a start, isn’t just about shattering performance or an utterly captivating richter-8 soundquake. It’s also instantly responsive. But you do have to be paying attention: the power builds with every extra rev, especially beyond 5,000, and so the max power arrives at 8,000, the exact instant the rev limiter cuts in. So to get the best out of it you have to be right on the case with your gearchange timing.

Whatever, you’re sure to be travelling at some hectic sort of pace when you start to explore the cornering. And here the Murciélago sends you a surprise parcel. It isn’t half as scary as you’d think. Provided you can see where the road goes (the a-posts get in the way) and you have enough tarmac (the rear end is disproportionately wider than the front), you’ll be ok. 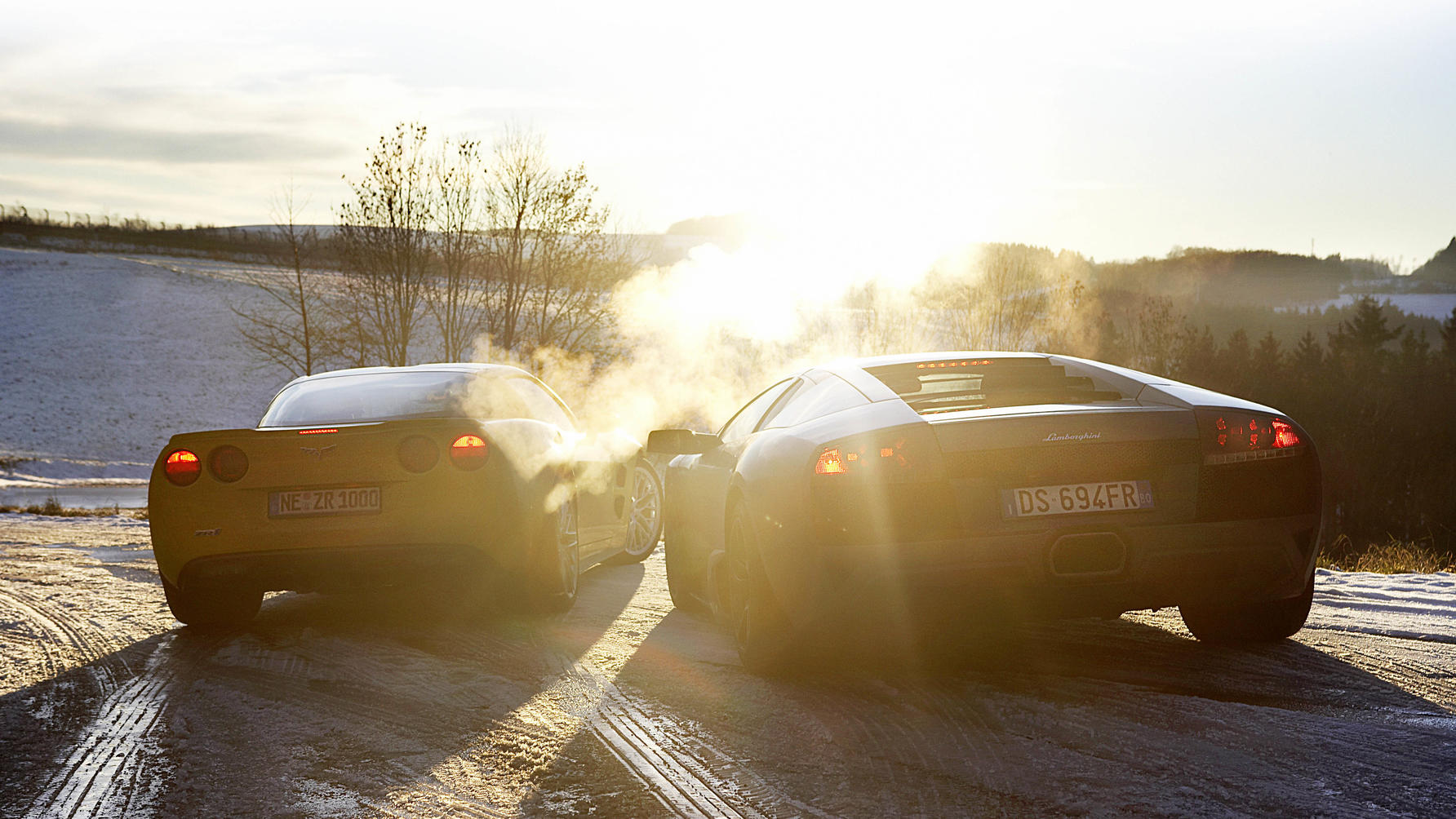 Its steering is just sublime: you can pour the Murciélago into corners and commune intimately with the front tyre treads, sensing exactly how much grip they can call on. It begins with gentle understeer, but you’ve always got the power to settle things. Don’t delude yourself though: this is not a car you ever slide. Step beyond its comfort zone and it will turn as scary as it looks. Live within it, and there’s the balance and feel of a sort of Impreza squared. The sheer force of the Murciélago’s acceleration and braking and cornering grip, and the subtler sensory array of noise and steering feel, make for an experience that takes everything we love about cars and goes beyond it. Truly, a supercar.

Can the Corvette answer all this? Oh yes. But it’s more traditional. And, when you’re really pushing on, it’s actually got the trickier chassis to keep on top of. That’s because its steering is fast and a little nervous – the car’s set up to be so agile that on the road I find myself wishing for a little gentle front-end slip in the first few degrees of a corner, just to let me know how adhesive things are down at the front tyres. And of course it’s rear-drive, which means you can’t just stuff down the throttle and expect the car to sort it all out. Apple-pie drifts are there for the taking when the ESP is off, or even when it’s in the intermediate ‘competitive mode’.

Set it up right though and the mid-bend balance and damping control are sublime. If you really want to get out of a corner sharpish, wait until the apex is well behind you and squeeze the loud pedal progressively. The Vette rewards it with magnetic traction – aided by clever adaptive damping and the balanced weight distribution from its rear-mounted gearbox. You’re projected away in a drastic, drastic dollop of get-up-and-go. 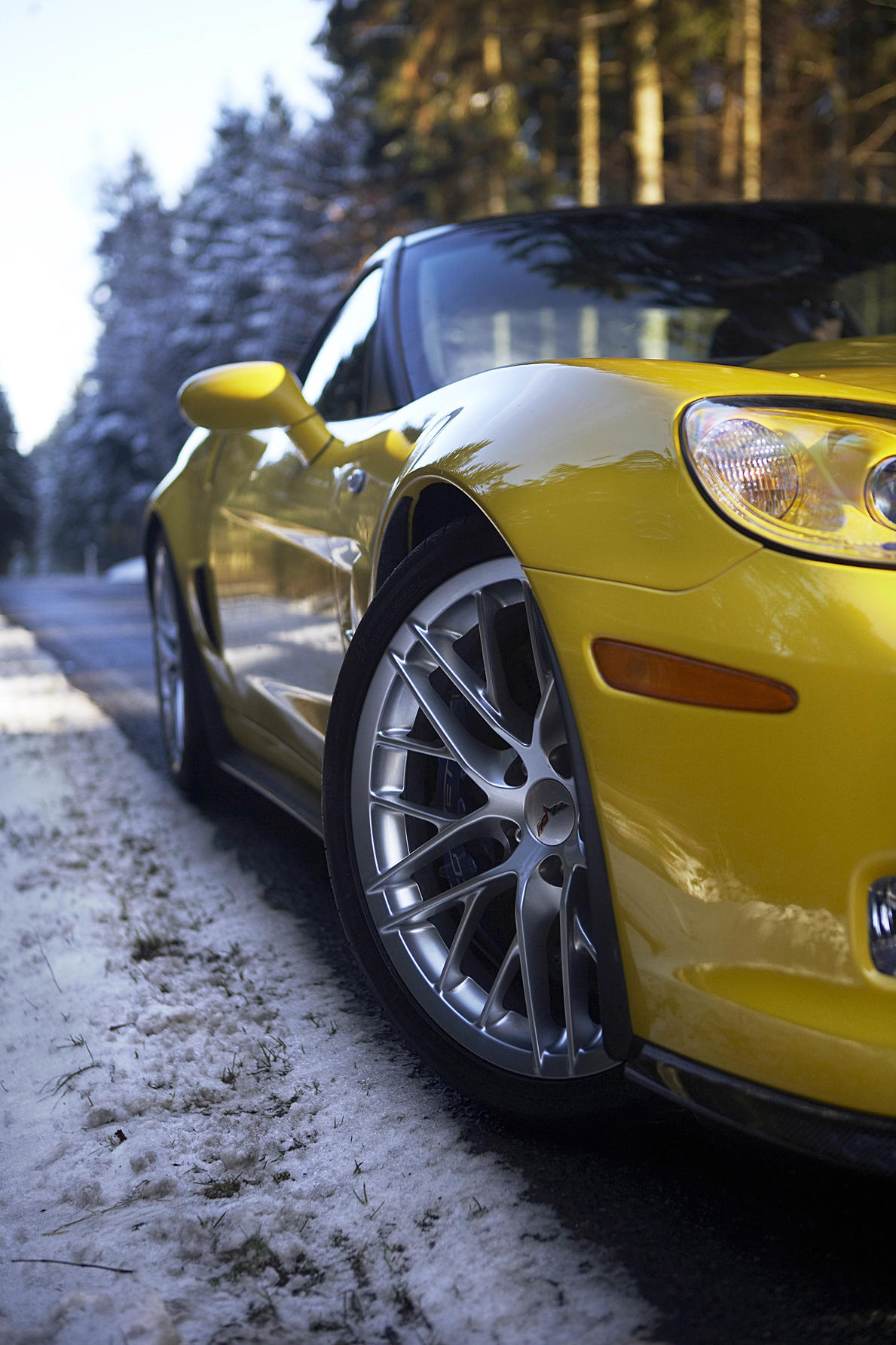 Thank its supercharger for the ZR1’s rocket thrust. While the Lambo has 6.5 litres, the Corvette has almost as much at 6.2, but the lungs of the blower mean you never really need to rev the Corvette to get a brutal episode of acceleration. Just as well actually, for the six- speed gearbox is on the clunky side. Just stick it in the highest gear you think you’re going to need for the foreseeable, and look down on the world from that high-altitude torque curve. Truth is, in a world where automated-clutch and twin-clutch transmissions are becoming the supercar norm, the ZR1’s manual box is about the one remaining thing to call low-tech. The chassis and suspension is aluminium, the body carbon, parts of the engine titanium, the brakes carbon-ceramic. The Lambo uses a steel structure, also clothed in carbon.

The cabin of the Lambo is an enveloping cocoon of the hand-made. That’s not the wavy stitching, rattly trim and whiff of glue that once characterised Lamborghinis either. It’s done with the precision and discipline of the Audi parent, but the flair of the Italians of old. There are, before you ask, no Audi buttons to speak of.

The Corvette feels mass-made, because that’s what Corvettes are. This brings huge benefits in ergonomics, including a head-up display, but it makes things feel a mite ordinary, despite the leather-wrapped dash. (Can’t complain too much mind: a 911 turbo’s cabin is just a Boxster’s in a Saturday night shirt.) What really does let the ZR1 down is its fast-food seats. They’re too flabby and wobbly to hold you against the ZR1’s immense forces. 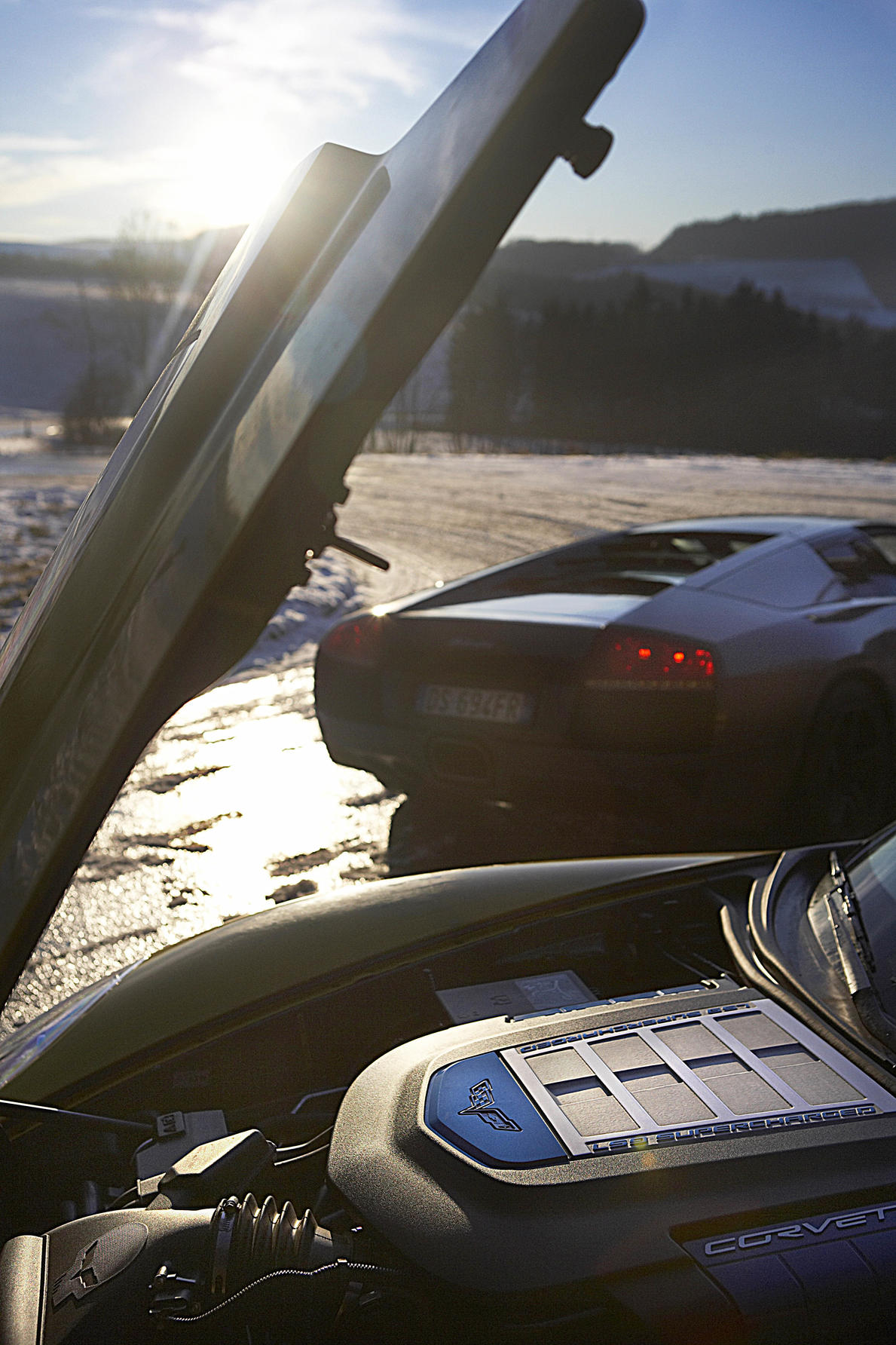 The fact that the ZR1 shares a cabin, a suspension, an electronics system, a transmission and a production line – but not a whole lot else – with the mass-made base Vette is why it’s half the price of the Lamborghini. Still £109,000 mind, but half the price. We got this far in the story without mentioning the money because in all honesty, when you’re flat on the throttle, squeezing the brakes or going through a full-chat corner, the money doesn’t enter into it.

But there is the crux of the issue for people who just don’t get the ZR1. It’s stuck in a kind of limbo-land. It can deliver the sheer blood-and-guts of a car double its price, so long as your driving style suits this classic knife-edge style. But it looks like a car half its price. And it’s just as sensible as the regular Corvette C6.

The Murciélago views the whole notion of sensible with utter disdain. It insists you do things its way, even when that’s a bit of a pain in the backside. There are times when my personality simply isn’t big enough to cope with that. But given the chance of a proper drive, it would be the one of this pair I’d pick. Not because of its looks or its eff-you personality or its undoubted curiosity value, but because it’s such a well-sorted car down the road. 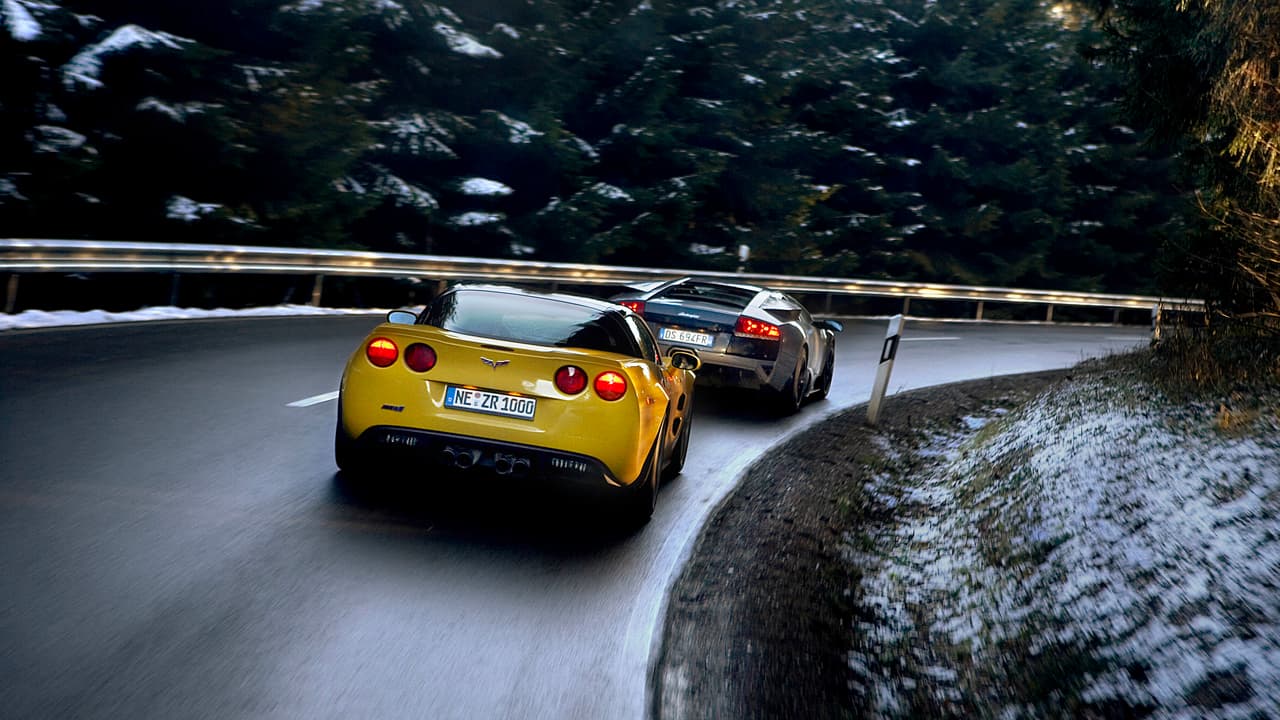