From the archives: the world’s fastest electric filing cabinet

It might be a typically sunny afternoon in LA, but the drivers in SoCal’s biggest city are in an uncharacteristically foul mood. Squashed into the back of what feels like a motorised filing cabinet filled with more static than Dixons on Christmas Eve, I can’t see very much of what’s happening ahead. But I can see plenty of what’s going on either side, and it ain’t pretty.

A candy-floss-coiffured old dear wearing pearls and bifocals in a gold Honda Civic is giving me, or rather the vehicle I’m riding in, the finger. And a heavily tattooed gentleman with slicked-back hair in a Toyota pickup is also visibly upset. What’s that he’s saying? “[Something very rude]” Oh, yes. That. 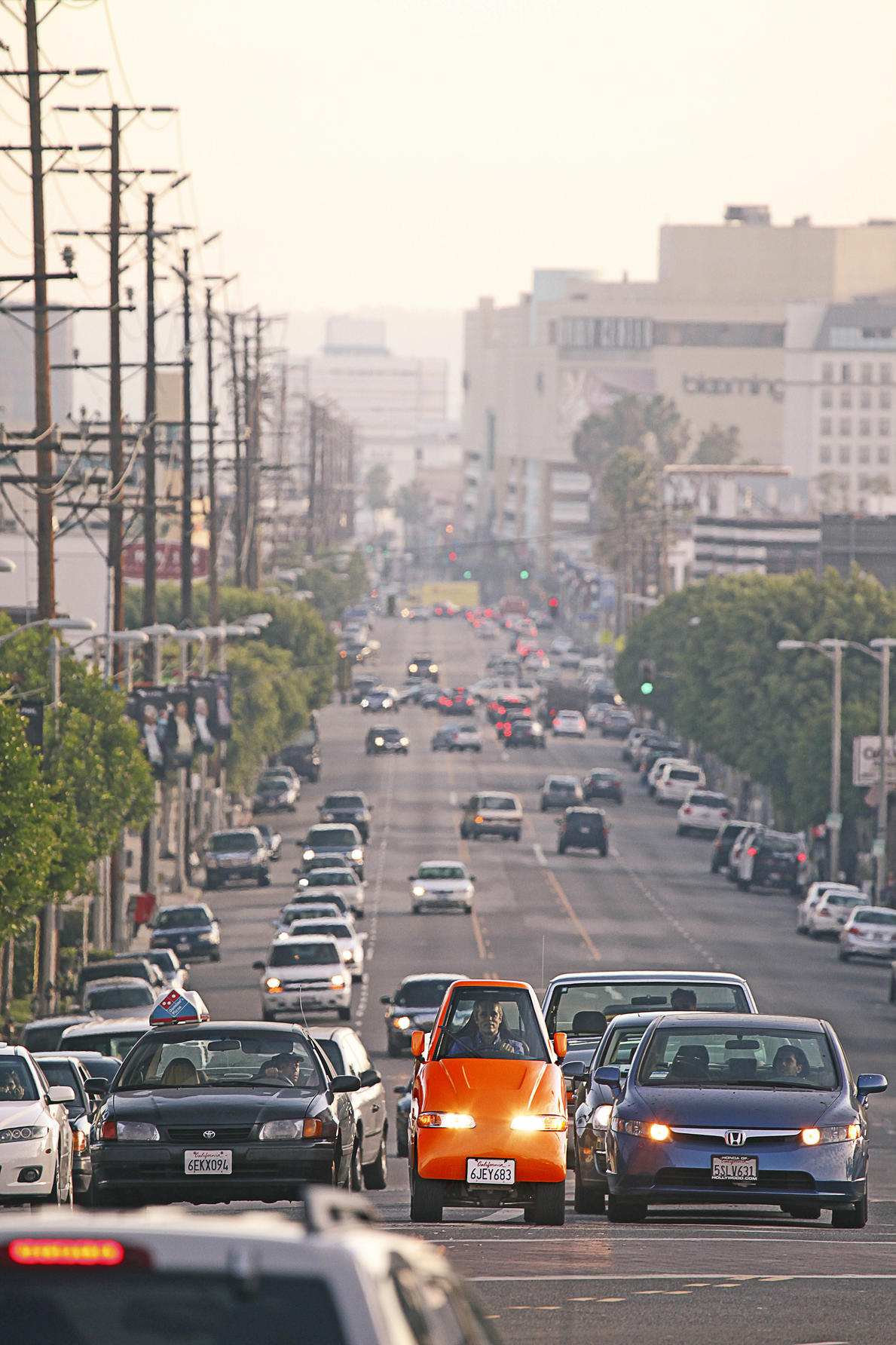 The cause of all this outpouring of vile language is a sunburst orange Tango T600, a bizarre, do-not-adjust-your-TV, two-seat, tandem, electric vehicle. The reason it's causing so much upset is that, rather than following the lines of traffic up La Cienega Boulevard towards Sunset, Rick Woodbury, the thing's designer, builder and marketer, is demonstrating the 39in-wide EV's ability to split lanes like a motorcycle. And, even though it might be legal to do so in California, the other drivers have got a major problem with being Tango-ed.

To be honest, I'm not exactly thrilled with the situation either. It's always a risk to drive a car built by someone in his shed. But those risks rise exponentially when you are only a passenger. Particularly if the creator has racing aspirations, a nervous laugh and is hell-bent on demonstrating his new vehicle's ability to shred preconceptions. Like Rick.

"Ha," he says as horns blare all around us. "Look at that, everyone loves this car." I'm just about to lean forward and point out that, er, it might be otherwise, when Rick throws the Tango violently left and right through the traffic and I slam against the sides of the car. I resolve to tell him at the end of this hairy test ride instead. 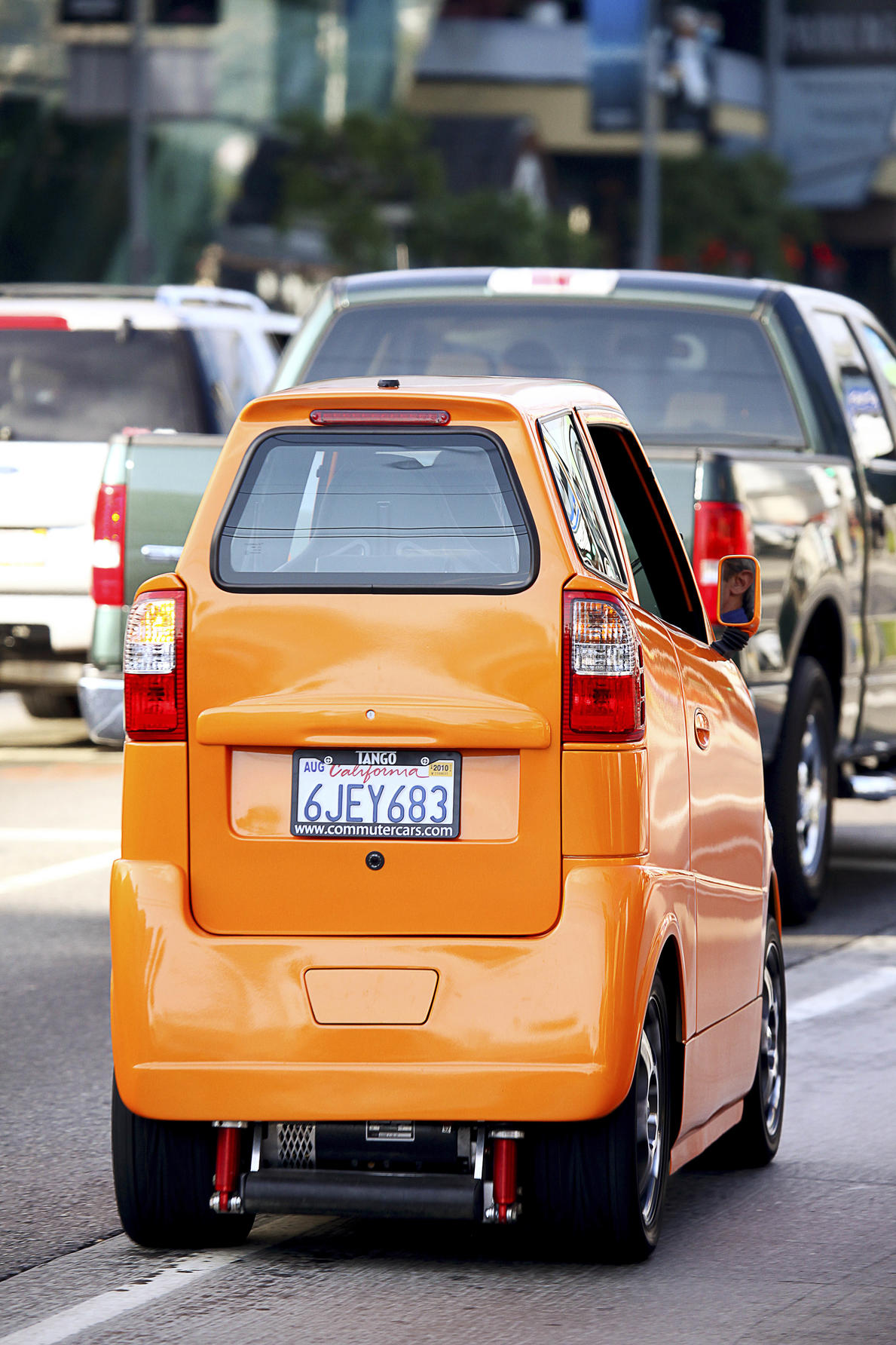 Which arrives, as in pretty much every electric car test these days, rather sooner than the manufacturer intended. But not before Rick has demonstrated this 5ft tall and narrow 1,497kg vehicle's patented ability to corner savagely without falling over. Something that, after a few wheel-in-the-air, heart-in-the-mouth moments, I was not entirely convinced about, patent or no patent.

But maybe that's just me. George Clooney had one for a couple of years and is still in one piece. Also, Google mentors Sergey Brin and Larry Page have one each, following Rick's demo at the Googleplex, and are still with us for the moment. So there must be more to the T600's appeal than just its narrow width. And sure enough, there is: power. A huge, almost comedic, amount of power and torque.

Despite being just two-and-a-half-metres long, the Tango T600 packs a punch that's equivalent to most 40ft 16-wheeler trucks: 805bhp and 1,000lb ft of torque. Even with the weight of the batteries taken into consideration, the Tango is more than merely fast. It's properly quick. With the right drivetrain and battery pack combo in place - more about those in a minute - the Tango can hit 60mph in four seconds and cover a quarter mile in 12 seconds. 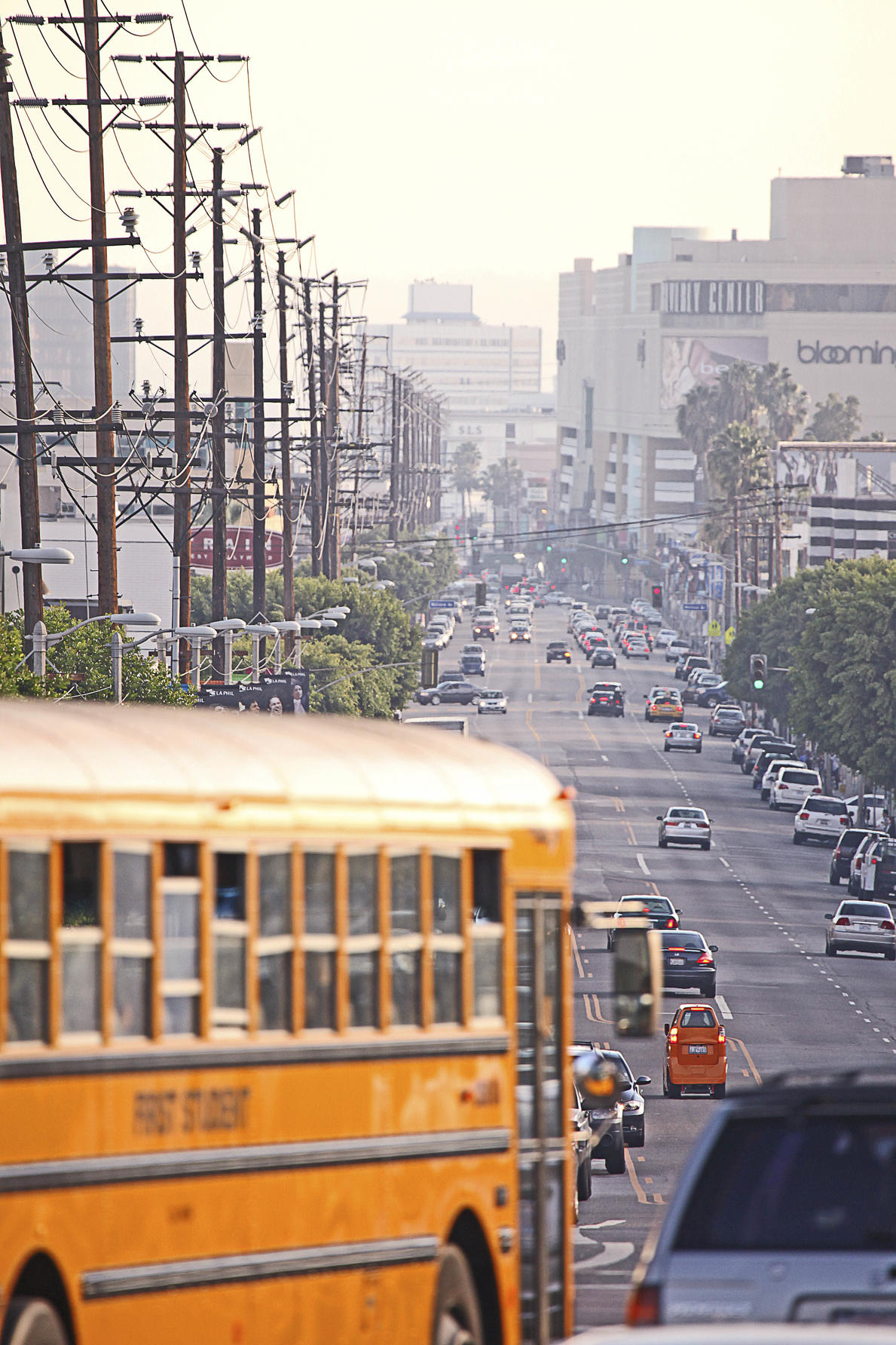 The battery and electric motor options start with a 10kWh lead-acid battery pack that gives about 40 miles range between plug-ins, and rise up to a hairy chested 49kWh lithium-ion power pack that will yield around 200 miles of range. Electric motor options begin with the standard nine-inch motors and rise to a custom unit built by AC Propulsion.

Why wouldn't everyone just go ahead and fit the best motor and battery unit? Price, that's why. The basic T600, with the boggo nine-inch motors but no battery pack, costs - wait for it - $108,000. The cheapest battery pack to date costs another $8,000. But if you want the big fella, you are looking at handing over another $55,000. Yes, just for the battery. Which brings the total on-the-road price to a somewhat impossible-to-justify $163,000.

In the Tango's defence, it's a lot better-equipped than you might expect. All of the bodywork is made from carbon fibre. The interior is cocooned in Alcantara. The seats and four-point harnesses are by Sparco, the steering wheel by Momo, the electric dash by MoTec. There's a 400W Alpine sound system complete with GPS and a reversing camera. So it's all quality kit. 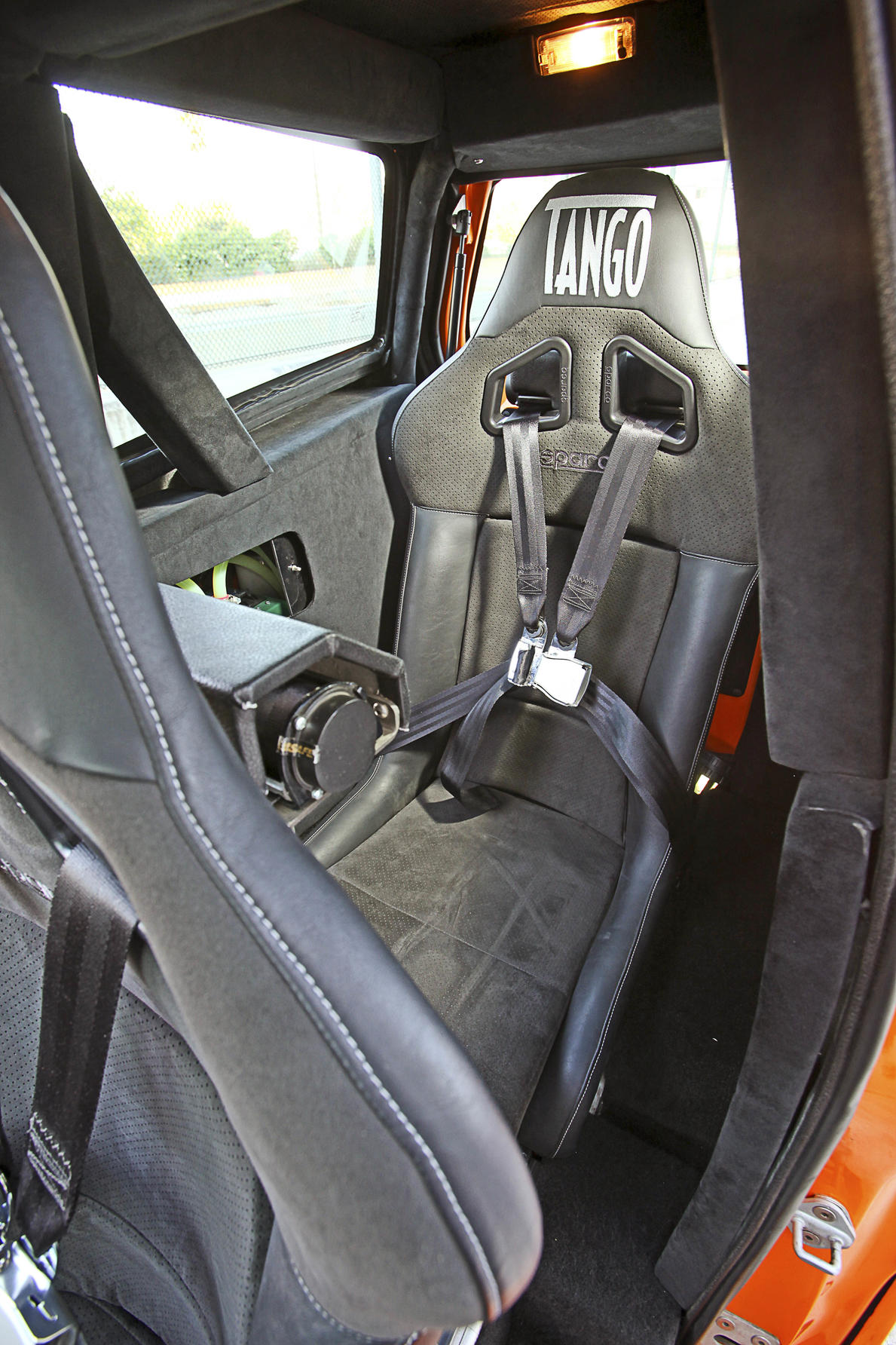 Not so much the chassis and upper structure of the car, though. It might feature a race-style roll cage and have four-bar side-door protection, to stop that inevitable jacked-up Hummer from flattening you into the street like a bug when you zig when you should have zagged. But there's not much to write home about otherwise. Apart from the fact that the 227kg battery pack slung under the T600 is entirely unsprung.

This, as you might imagine with just four inches of ground clearance, ultra short-travel suspension front and rear, plus tiny 10-inch wheels, gives a ride quality that's no stranger to the word appalling. It's not something Rick's terribly proud of, but he says he tried several ways of suspending the pack but then ran out of patience. "I know it rides like s***," he says candidly. "But s***'* better than stuck in traffic, isn't it?" 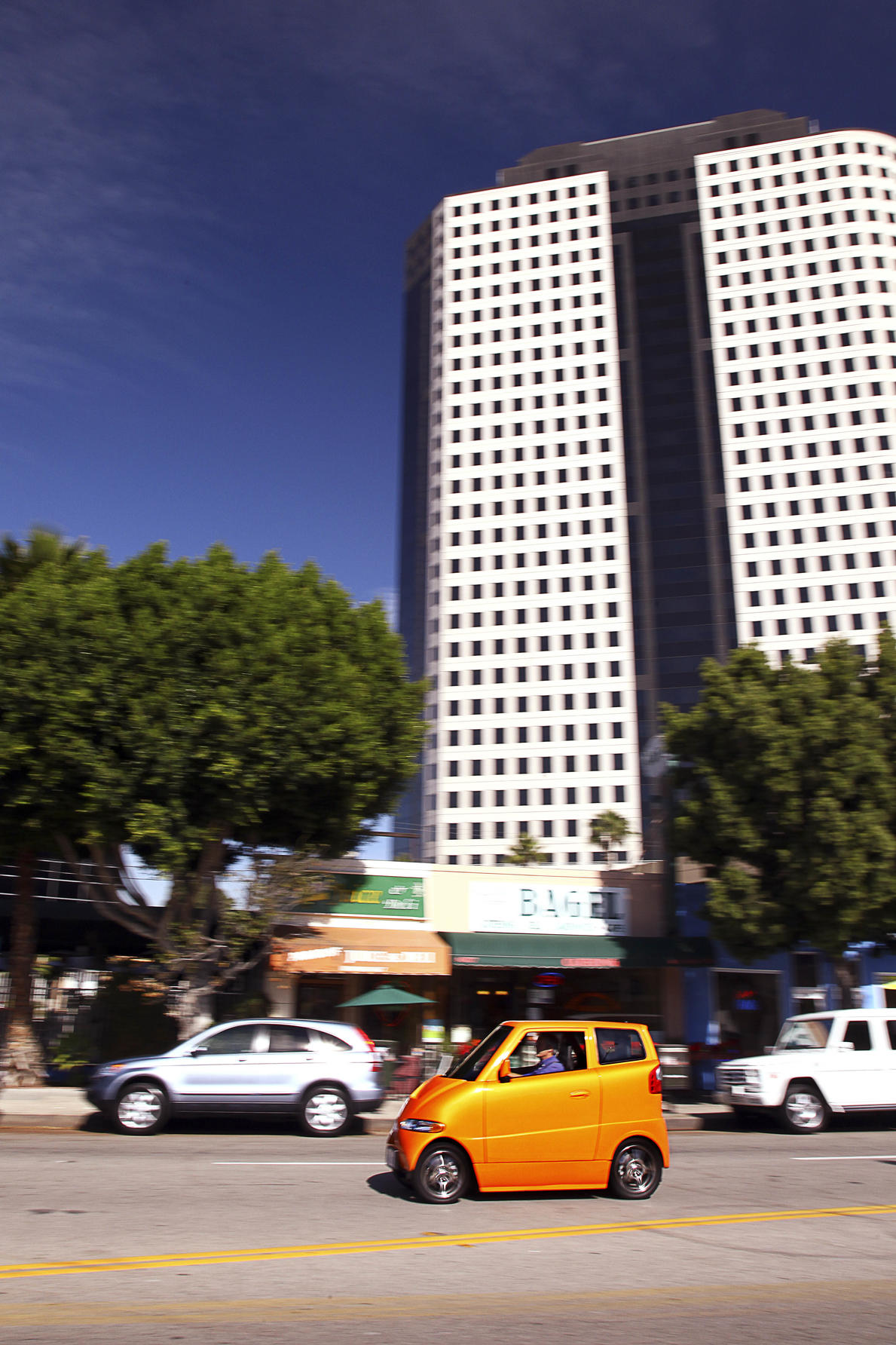 Well, yes and no. As much as I wanted to finish this story with the line ‘The future's bright, the future's orange', I can't. I admire the left-field thinking that has gone into the Tango, but it doesn't really work for LA yet, and not just because people plainly hate lane-splitting cars. It's also because the T600 has to be built from a kit, charged from an elusive plug-in station and, the final nail in the coffin, you can buy a lane-splitting, infinitely better-looking Ducati 1198 for a tenth of the price.

So, unless I missed something, for all its enormous power and ferocious acceleration, this is one Tango I'll be sitting out. 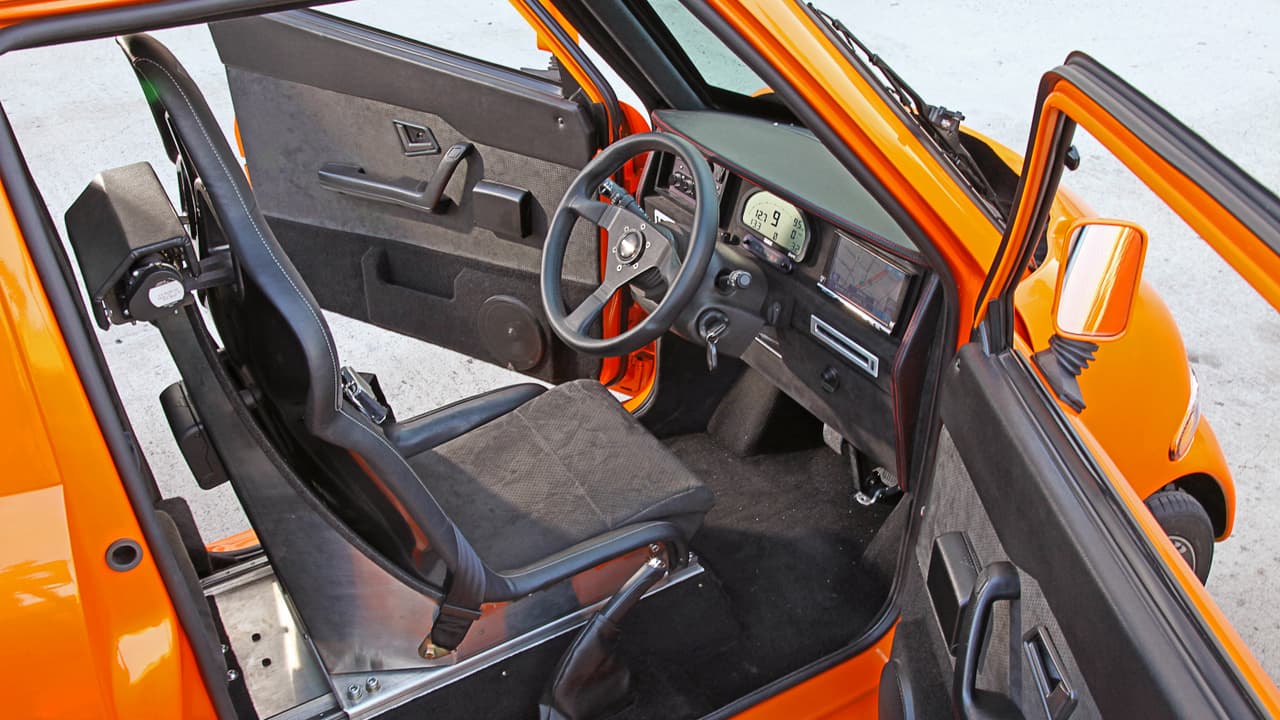