Say goodbye to the 650S and hello to the new, very clever 710bhp Super Series from Woking

When McLaren’s automotive adventure kicked off in 2009, the furiously process-driven logic of the company’s F1 arm seemed to have seeped across the surgically spotless halls of the Technology Centre. These would be intellectual supercars. McLaren kingpin Ron Dennis even told a slightly dumbfounded TG that they could scientifically prove they’d created the best performance car in the world.

Eight years on, and the quest has been recalibrated. Lessons have been learned, some humility leavens the mix, and anyone who’s driven the 675 LT will know just how hard these guys can party. The facts and stats are more startling than ever – up to 30 per cent of the company’s turnover is reinvested in R&D, vastly more than the industry average – and the line-up has successfully cohered around the Sports Series, Super Series and Ultimate Series. A new £50m composites manufacturing facility has been confirmed in Sheffield, creating 200 jobs. Apple, the world’s most valuable company, was reportedly sniffing around late last year, but McLaren wants to remain independent and self-funding. 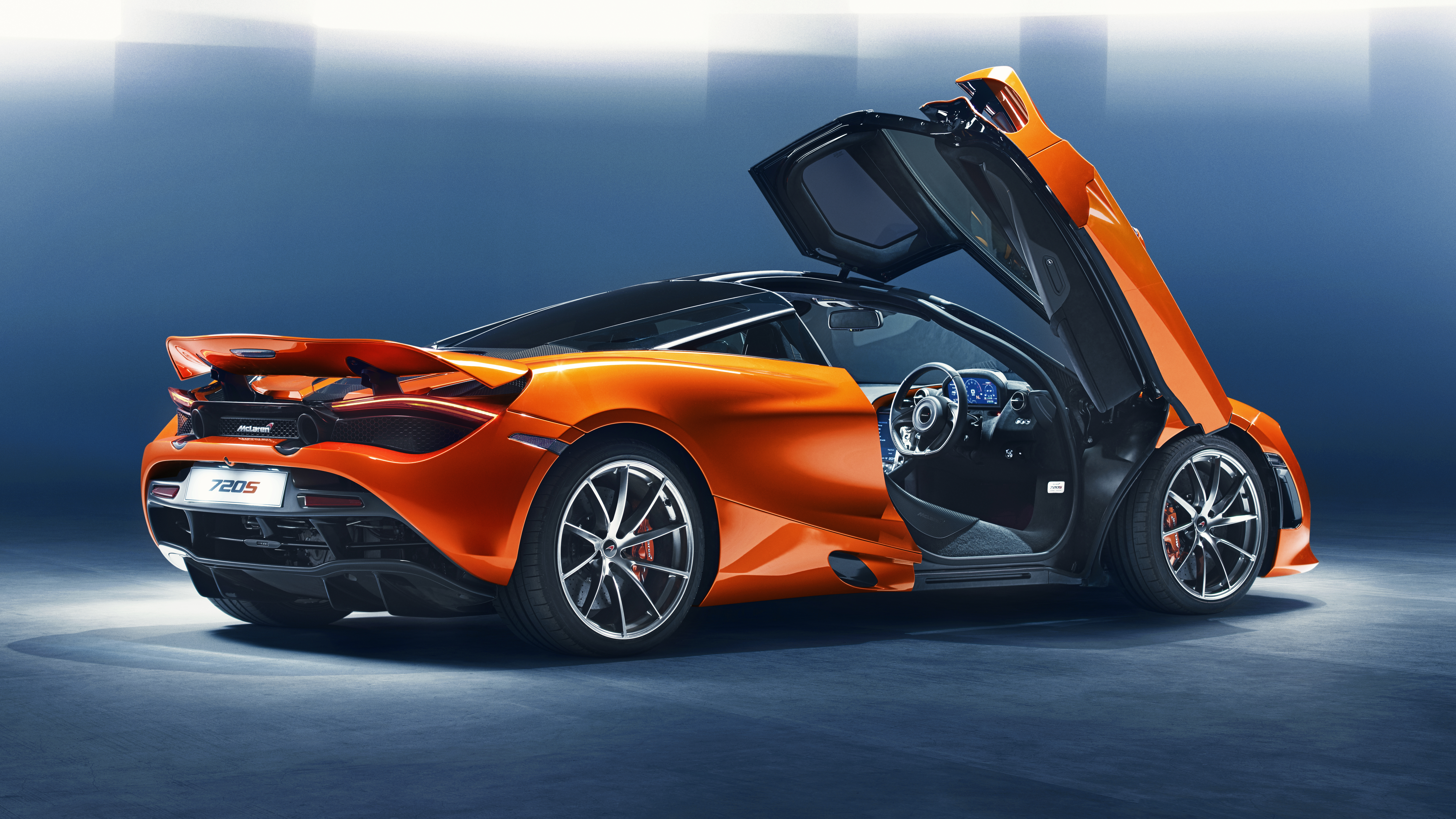 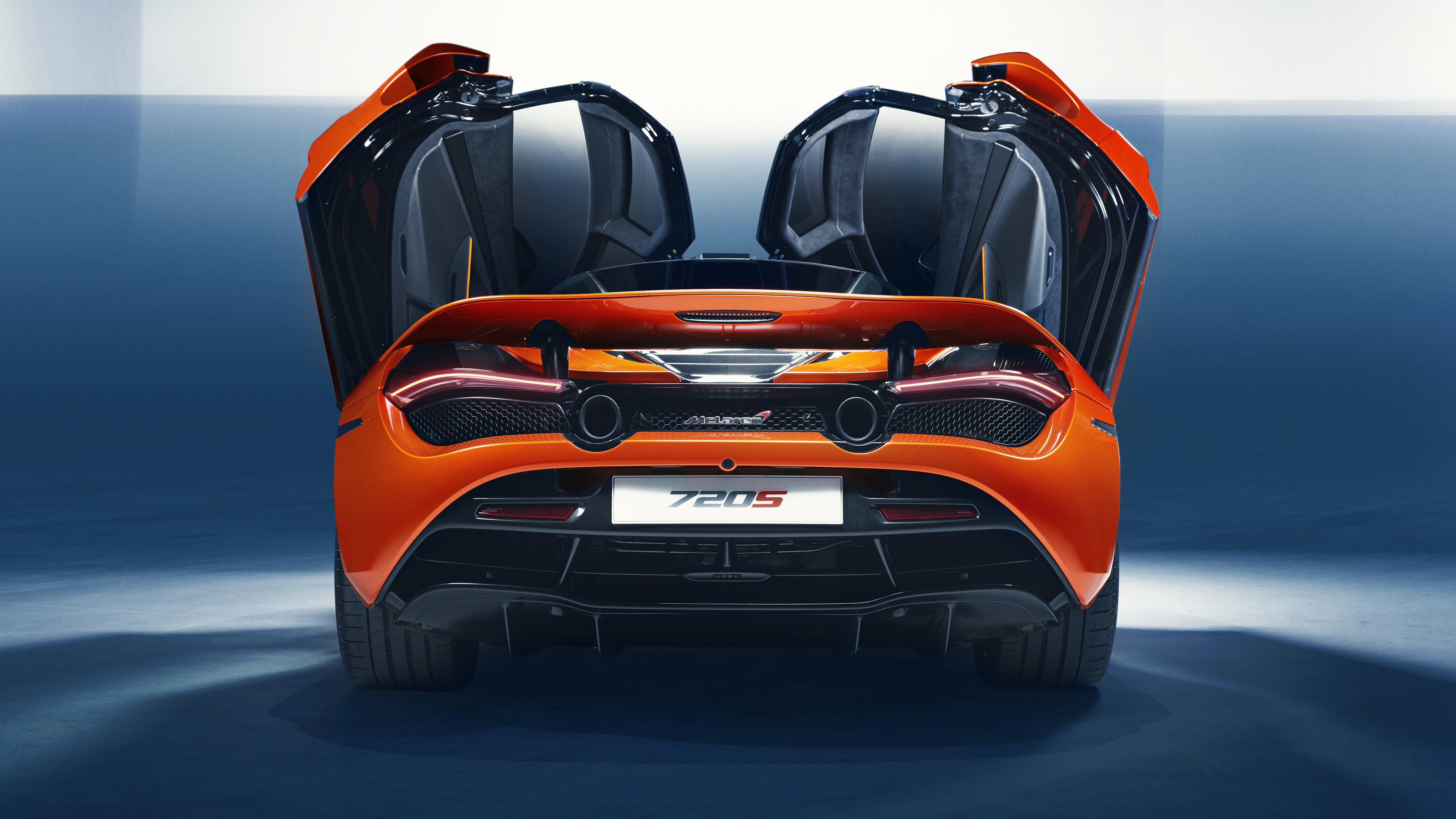 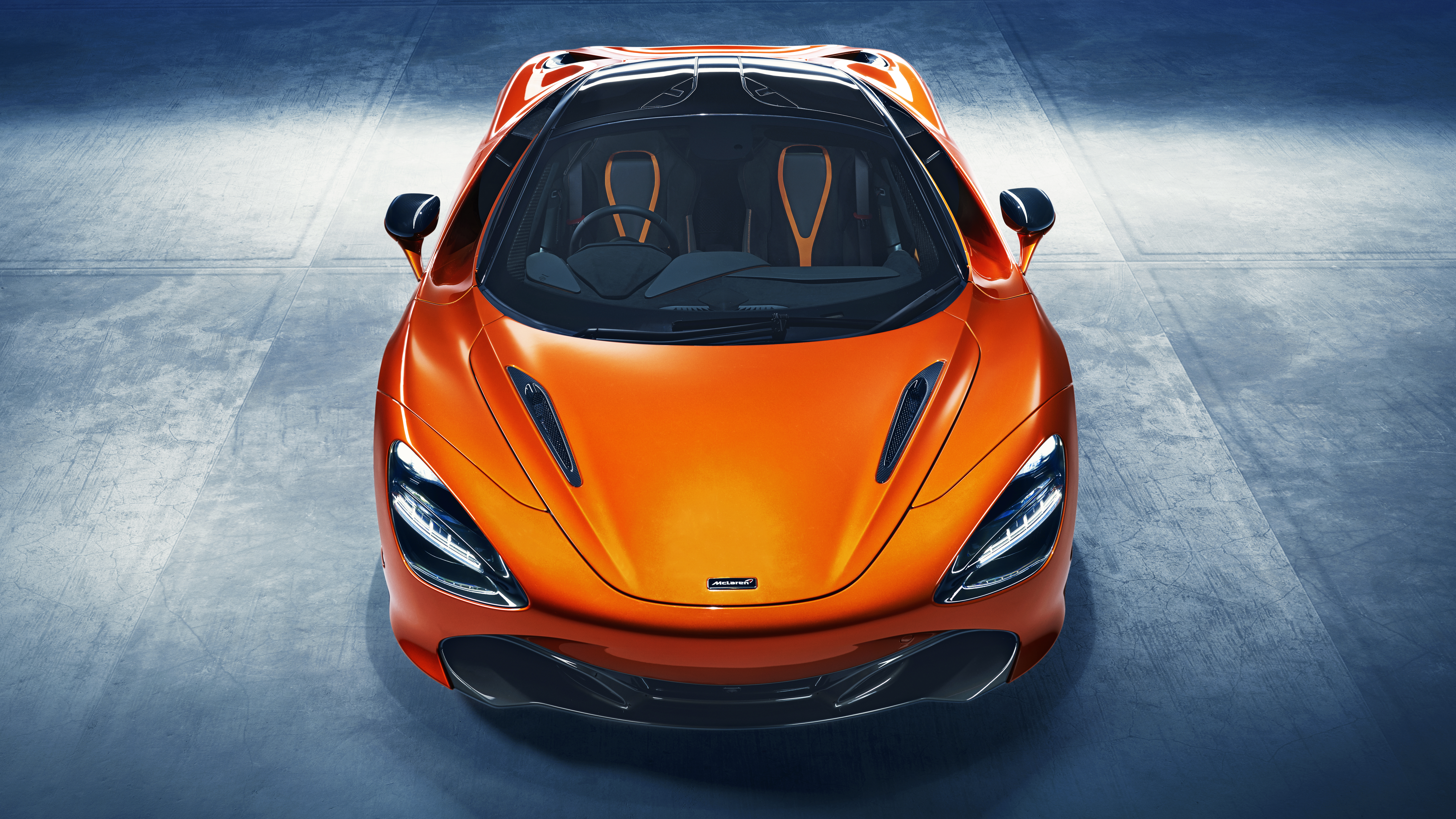 Now it finds itself replacing one of its core cars for the first time. Another milestone, not least because this also heralds a new generation of carbon-fibre chassis, a heavily revised powertrain, and a load of new technology. The topline stuff includes a power output of 710bhp, 568lb ft, 249g/km CO2, 0–62mph in 2.9secs, 0–124mph in 7.8 and 0–186mph (300km/h) in 21.8. But it’s the less empirical part of the equation where the progress is being made. According to product director Mark Vinnels, “the challenge was to revolutionise the segment. But we also wanted to make a big leap in entertainment. We want to combine performance, emotion, refinement and efficiency in a single, beautiful whole.”

Enter the 720S. And enter, as Vinnels says, the entertainment (or, more accurately, a renewed emphasis on it). Which is why, as subjective as it is, we’ll start with the visuals. Only the fortunate few will get to own or drive one, but be in no doubt, the 720S throws out a serious dividend to anyone who catches sight of it. We’re talking Countach or Pagani levels of lunacy. Typically, though, the story here is much deeper than just drama. 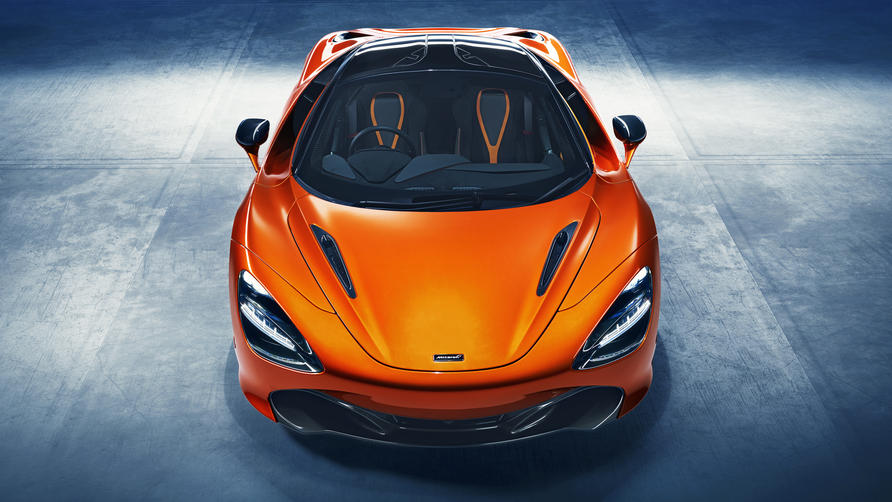 “Design is where you bring all the elements together,” chief designer Rob Melville asserts. “Styling is just one aspect of it. We want to create breathtaking products that tell you the visual story of their function, and we’re guided by four things. Nature, and the idea of ‘functional jewellery’. We want to be true with the materials we use – it has to be authentic. The proportions need to be perfect. And we are always brave.”

This last point is significant. From the overly generic, off-the-peg 12C, McLaren has found its own spectacular groove, and the 720S is next-level stuff. Not just because it looks like a full-blown 21st-century mid-engined supercar, but because it’s insanely clever. “Functional jewellery” here means making the air flow where you want it to, and in a car of this configuration that translates into two things: downforce and cooling.

Look at the 720’s body sides. Unlike Ferrari’s 488 GTB, the McLaren’s fuselage is uninterrupted. Look closely at its form, and you’ll get some idea of how the area of air pressure that builds up and swirls around the front wheelarches is separated and utilised: the panel ahead of the wheels evacuates the turbulent high-pressure air away along the side to clean up air flow, while a channel at the top of the doors ducts high-velocity cooling air into the radiators in the engine bay. The doors themselves open to an angle of 80°, so don’t be tormented by an NCP space flanked by two concrete pillars. 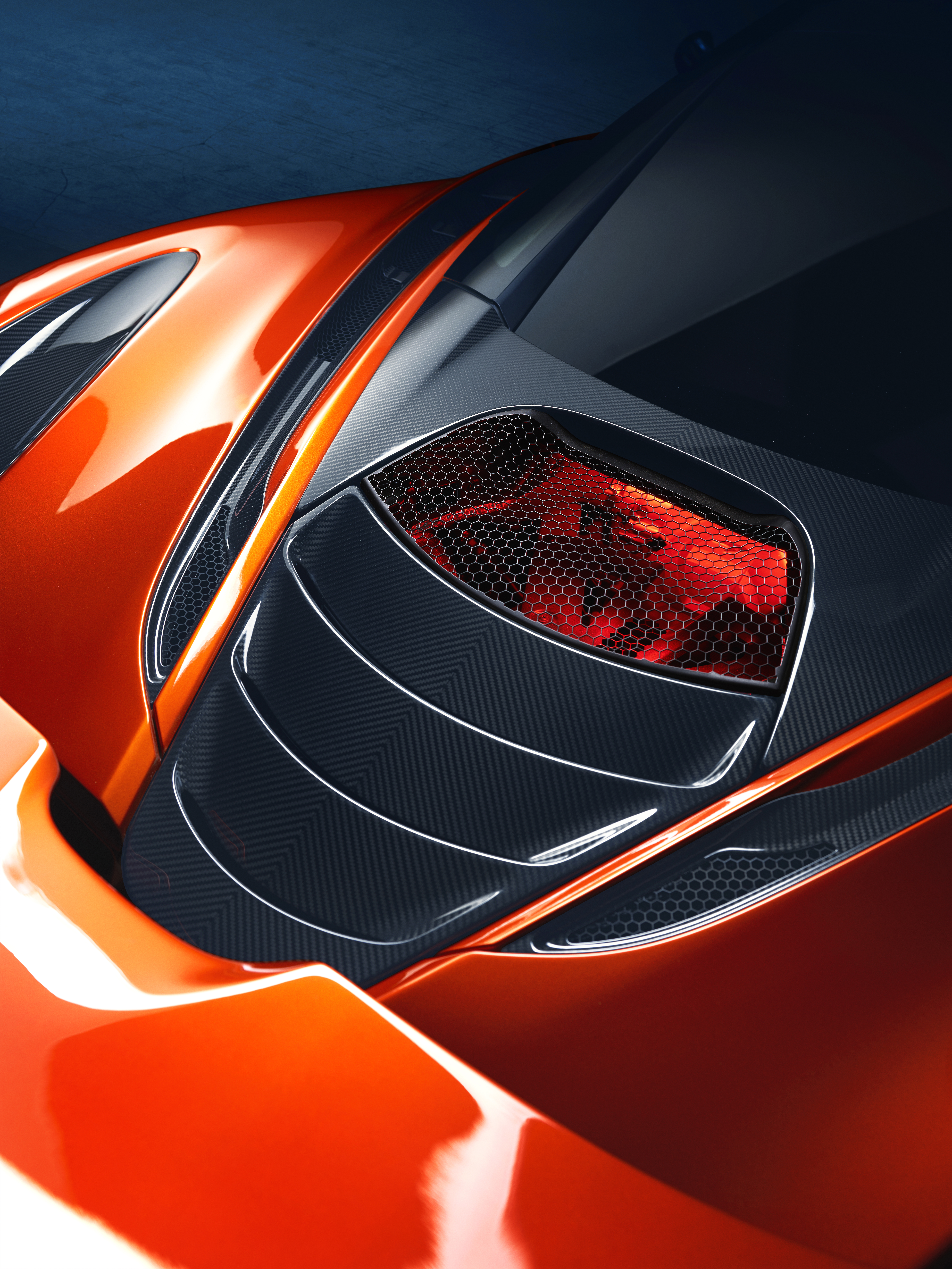 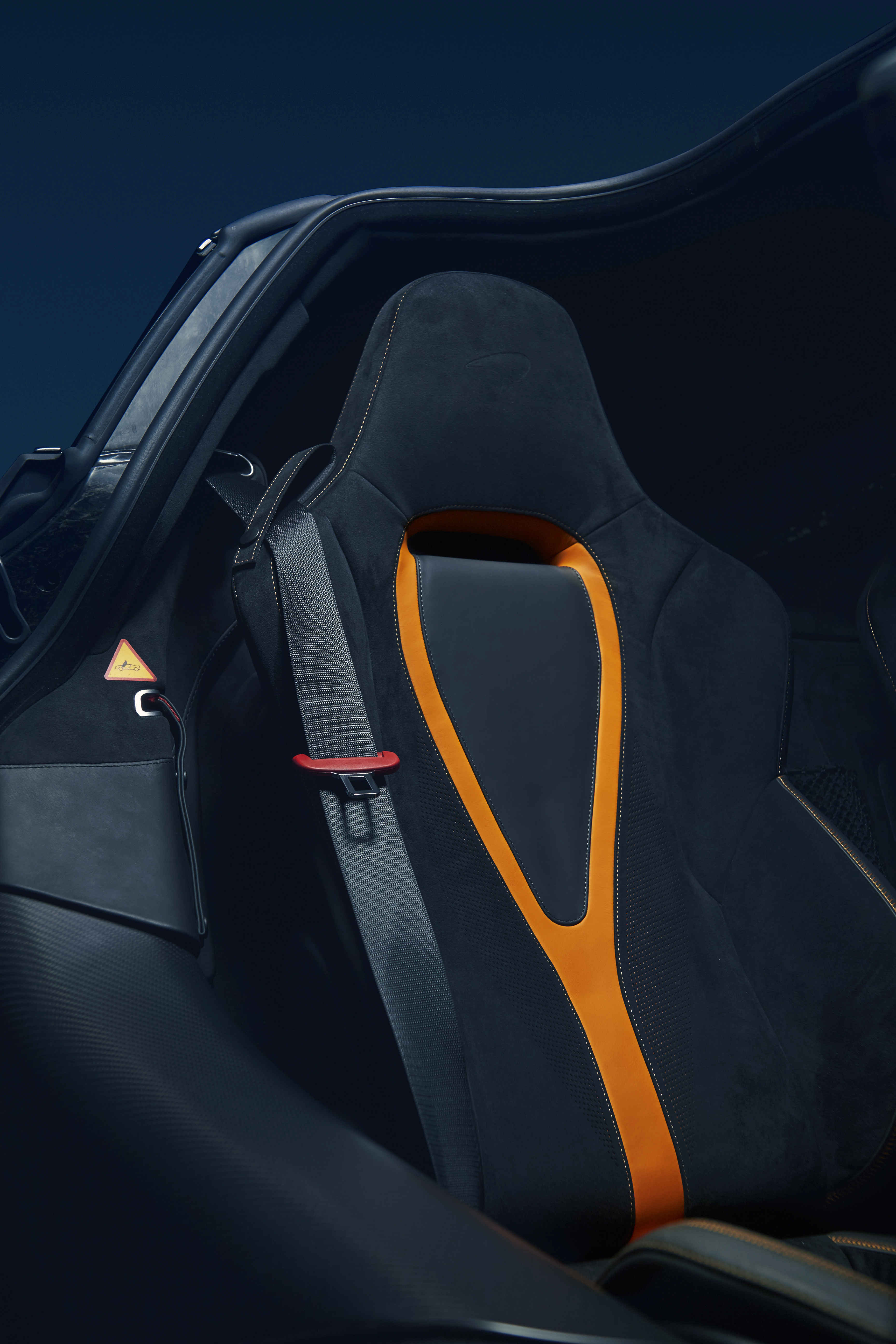 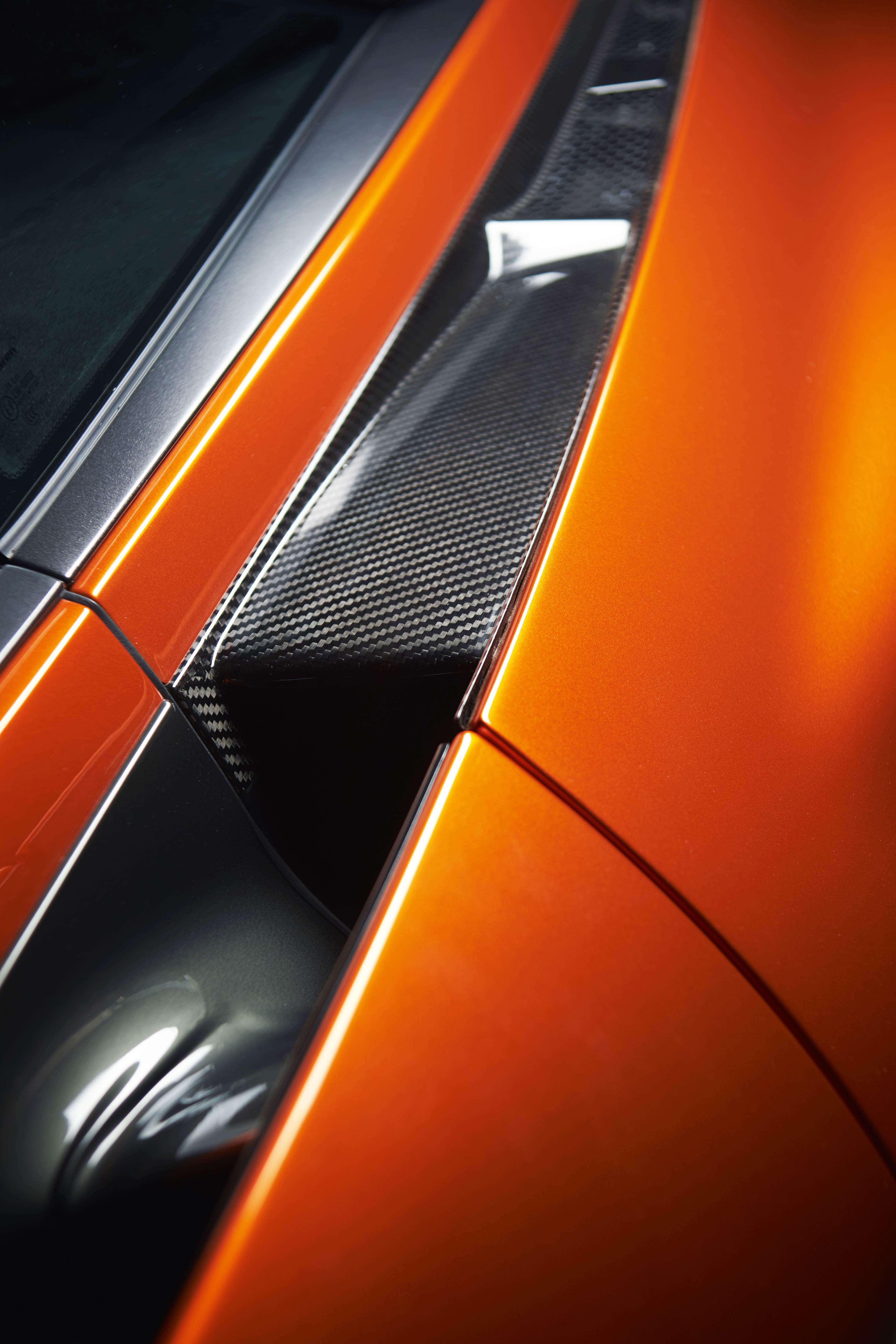 There’s more aero fun at either end. Upfront, the 720’s ‘eye’ apertures are more accurately anatomised as sockets, with air ingeniously ducted below the LED headlights. There’s also a madly creative-looking front spoiler, and bonnet gills. At the rear, there’s an active wing that spans the full width of the car, adjusting itself according to optimal aerodynamic need. Or for rapid retardation: it adopts its most extreme ‘airbrake’ angle in less than half a second if you need to stop in a serious hurry. Overall, the 720S generates 50 per cent more downforce than the 650S managed at full tilt, has double the overall aerodynamic efficiency, and is 15 per cent more efficient in its cooling.

Maranello isn’t the only place that can do theatre

“Back in 2012, we laid out a vision for what a McLaren should be,” Melville says. “This is the closest we’ve come. It’s about finding the edge of technical detailing. The doors were the biggest challenge. We did feel the pain a bit getting those right. You don’t open them so much as begin unpeeling the car.”

It’s an impression heightened by that new carbon tub. Dubbed ‘Monocage II’, the chassis structure now incorporates an upper structure and windscreen surround, so it’s even more rigid than the 650. Lighter, too: its lightest dry weight is 1,283kg, 18kg less than the equivalent 650S. There’s an enhanced centre of gravity, thanks to the engine plenum being mounted 120mm lower than currently. Among Lord knows how many other options, 720S buyers can specify a “visible monocage” that exposes the material on the inside of the A-pillar. The cowl is also lower: like the stunning 570, the 720S promises to make good on the car industry’s obsession with delivering a fighter-jet-for-the-road sensation. 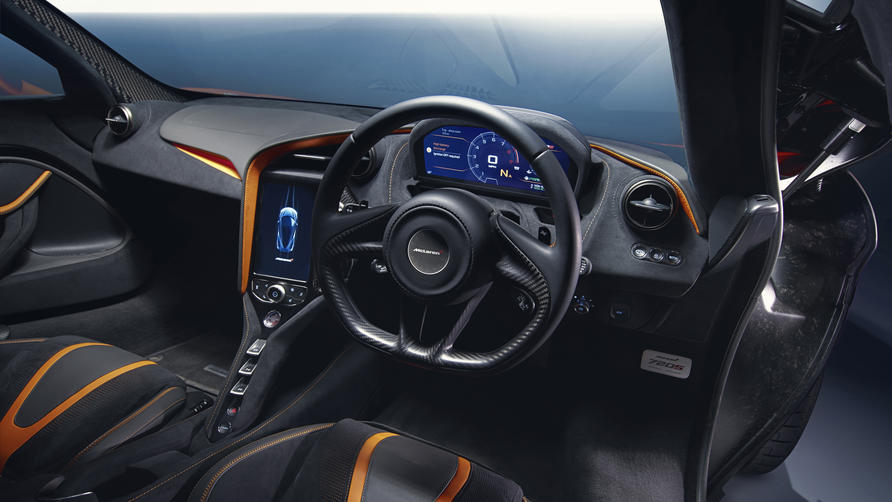 Vehicle line director Haydn Baker claims that 91 per cent of the 720S is new, and the enlarged 4.0-litre engine is 41 per cent new content (who works this stuff out?): turbos, intercoolers, cast-aluminium plenum, cylinder heads, crankshaft, pistons, and exhaust. The twin turbos are ultra-low-inertia, twin-scroll jobs that spool up much faster than before to reduce lag and sharpen throttle response. Aware that the current engine lacks character at lower revs, McLaren has reworked the harmonics. The whole lot is visible through the rear glass, and the engine bay is illuminated. Maranello isn’t the only place that can do theatre.

The 650’s multi-adjustable Proactive Chassis Control (PCC) receives some intriguing revisions. As before, you can choose between Comfort, Sport, or Track mode according to mood or context. PCC II uses multiple sensors – 12 more than previously, including an accelerometer on each wheel hub – to monitor inputs from the road and measure the tyre contact patch. The information is processed in milliseconds by the “Optimal Controller” algorithm at the heart of the system, and the damping adjusted accordingly. Vinnels talks about the input made here by a McLaren-sponsored Oxford University research programme, and it’s difficult not to love the idea of a couple of PhD boffins helping in the search for more mechanical grip. That and the fact that the base Pirelli tyre used by the 720S has the same performance as the old Trofeo track rubber. Extraordinary.

Best of all, you can chuck all this optimisation out of the window with the new Variable Drift Control, which, according to McLaren, “delivers additional enjoyment in Sport and Track modes, with fingertip control of Electronic Stability Control intensity”. Five years ago, you’d have been frogmarched out of the building for even suggesting such a thing. 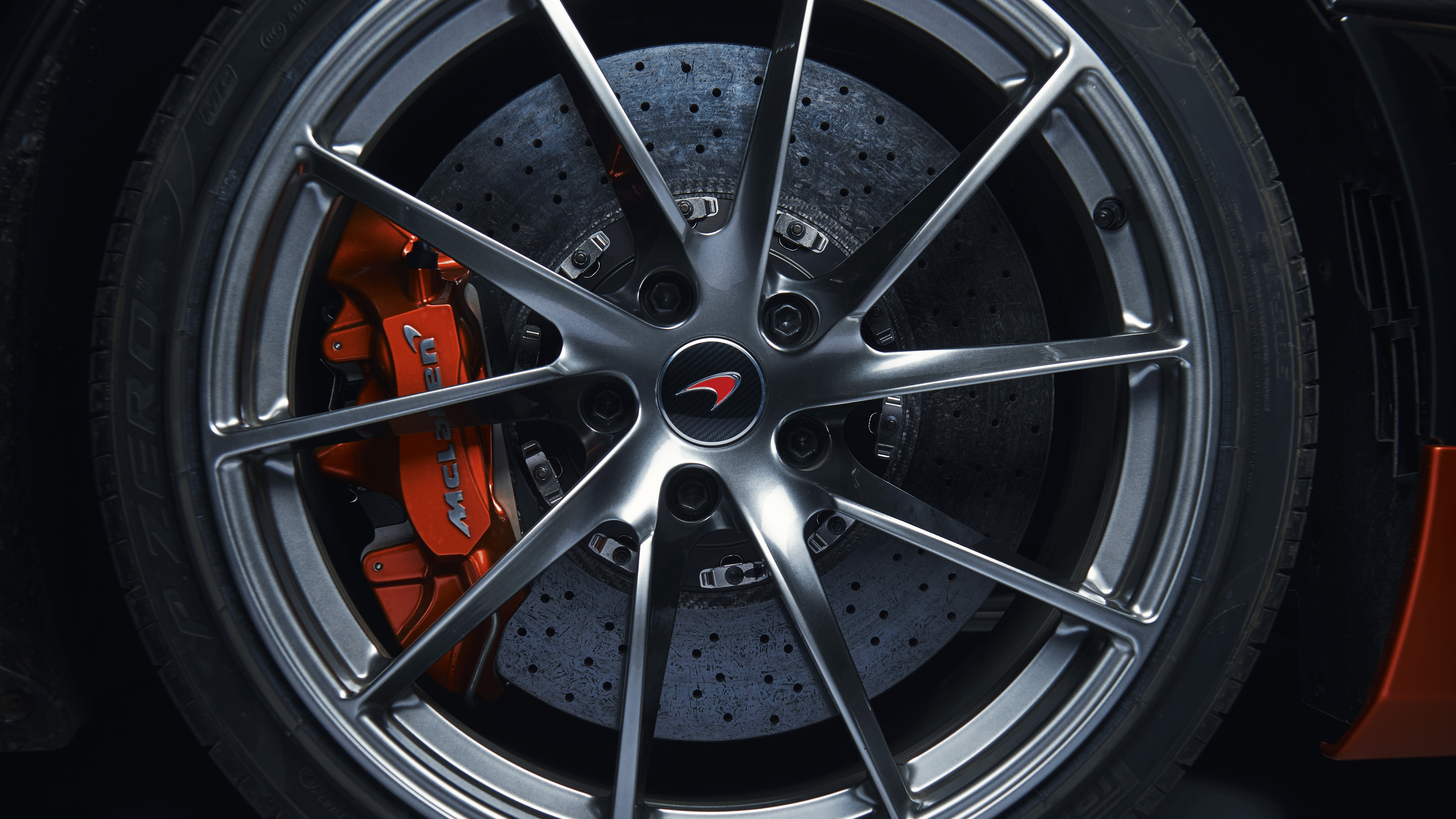 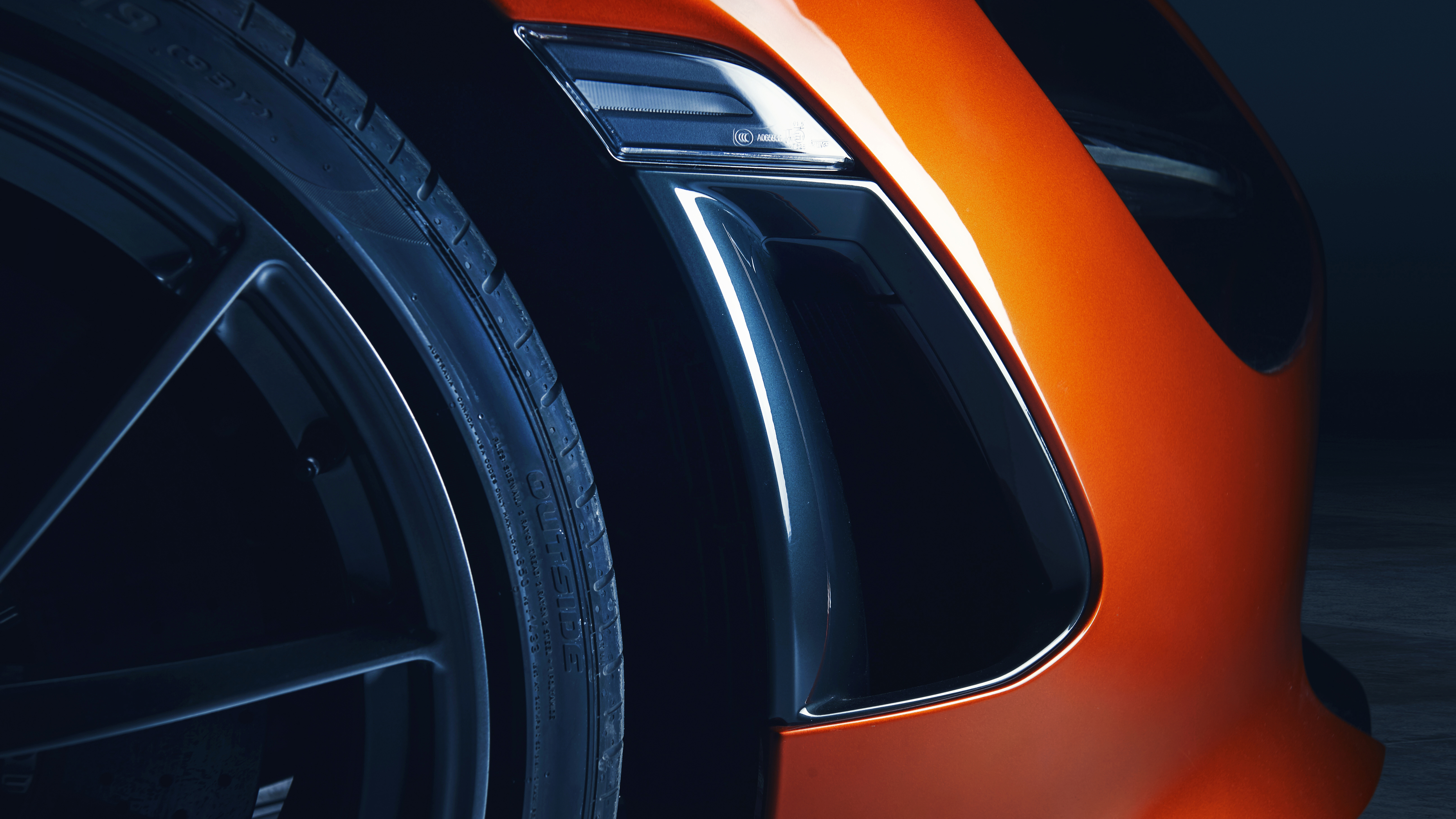 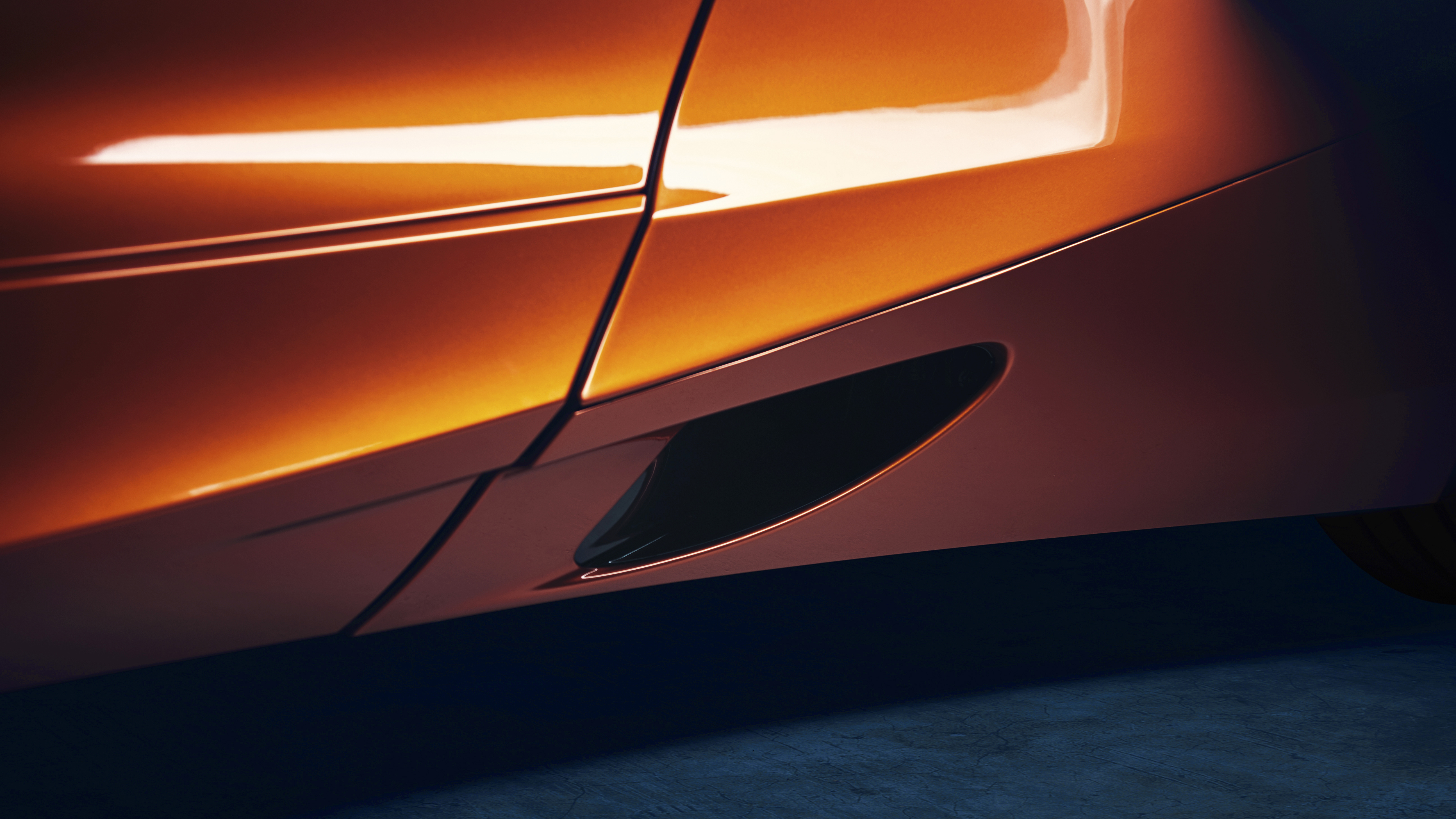 “We could have kept the performance advantage with a smaller step, but we wanted to maintain and increase the momentum,” Vinnels adds. “Why change the brake calipers? Because we can take 3kg in weight out of them.” He also points to a bracket on the wiper arm, and says that something about it bothered him throughout testing. “So we verified it in CAD afterwards and discovered that it was mounted in the wrong place. We fixed that.” Nor, despite its take-up elsewhere, is McLaren about to switch to fully electric steering. “We keep experimenting with EPAS, and we keep being disappointed by it,” he concedes.

Inside, the 720S somehow combines the brutal ergonomic efficacy of a racecar with the technical luxury of a contemporary GT. The wheel is perfectly sized, and doesn’t groan under the weight of a thousand buttons. The drive mode controls now live in a vertical pod to the left of the wheel. The main readouts are housed in a secondary binnacle above the main display. The D, N and R buttons are in another pod that tapers towards the bottom. The doors eat into the roof, Ford GT40 style, but it really does feel like being at the pointy end of an arrow, only with more control over your own destiny. Beautifully and intelligently finished, too. A car either has it or it doesn’t. There’s no such thing as having most of it. Yep, McLaren really is in the groove. 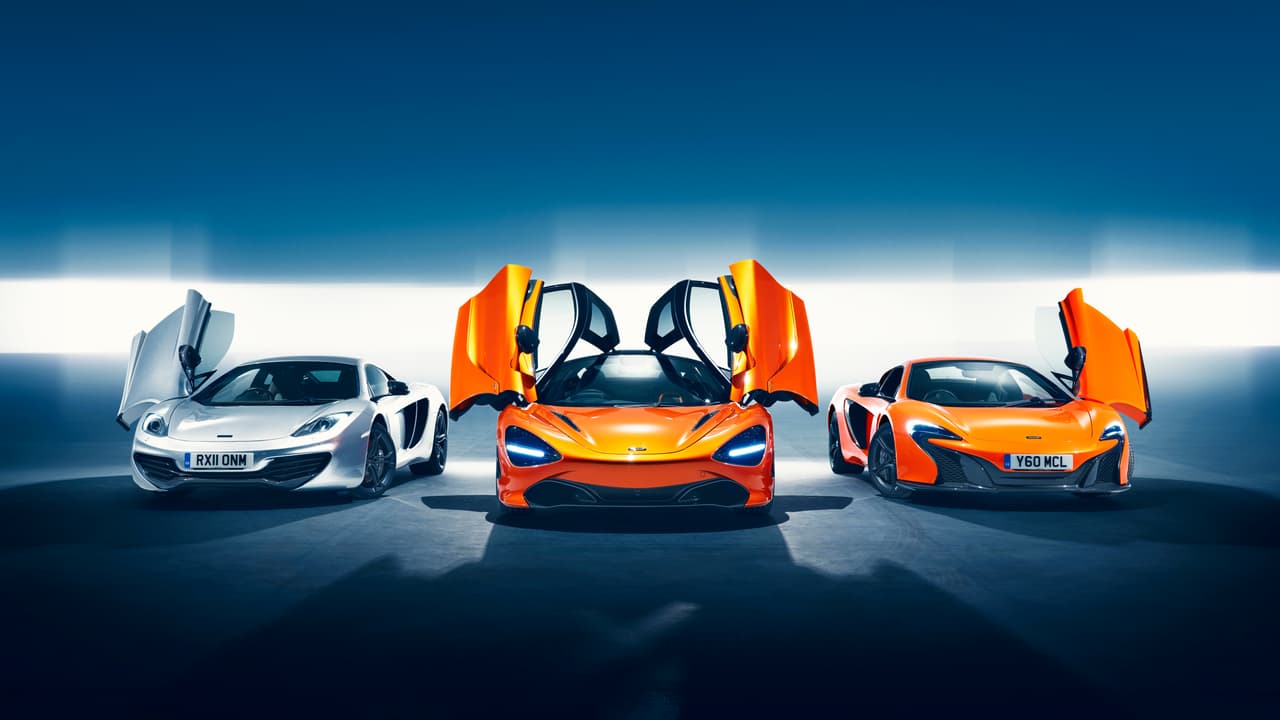