Top Gear: Wayne, thanks for your time. It must be a difficult period to be launching what’s basically a new car company. What do you think sets Cupra apart from the competition?

TG: So, who is your ideal target customer for a Cupra?

WG: Our objective from the VW Group is to conquest customers from other brands. I believe there is a customer base between the mass sales and the premium segment. Younger customers want to differentiate themselves, not with the old people…

They could be from brands like Mazda or Peugeot or Mini. Or with our electric cars, as an alternative to Tesla: a sporty version.

In the past Cupra was linked to racing and very ‘male’. And so we want more gender balance and to be more attractive to females as well, which I think we will achieve with our design, particularly with the Cupra el-Born.

TG: Your future is in electrification and Tesla's growth has now taken it into a whole new stratosphere. How do you become the alternative to Tesla?

WG: By showing that electrification, sportiness and performance doesn't have to be a contradiction but can be a perfect match. And of course to come up with a unique and sophisticated design for our interior and exterior. That's the way I think we will do it.

Take the Cupra el-Born which we've been working on over the last couple of years. We want to launch that car in September 2021, so that will be the first job. Then we look at the Tavascan. That should answer the question about the Cupras – how it stands out in terms of design and performance. That is where we want to go with our electrification, but not only with bigger cars but also smaller cars too.

TG: The Tavascan is obviously designed to be provocative. Is it just meant to shock or is that a concept car that will come to exist in reality, looking like that?

WG: We said to the designers: ‘You can't come up with a car that looks like a Batmobile that we can't do in reality afterwards. Anything you come up with, we have to be able to realise.’

We're moving on with the Tavascan’s development. We still have not announced exactly where and when and how, but it's our big dream that we're trying to make real, and the design development is continued absolutely in line with the show car.

We want to create things people either love, or they don’t

[We don’t want] a big let-down, that you have a provocative show car and then the production car that is totally toned down because of reality and you can't do the test parts and so on. The final car will be very, very near to the show car.

TG: Electrification could be perceived as levelling the playing field, there’s less differentiation in an EV drive train and what they offer than ICE. How will Cupra differentiate its cars from rivals?

WG: I wouldn't totally agree with the level playing field. In terms of acceleration, I think you're right. But there is a big difference when you talk about the handling [of] a pure electric car, not a car that's had a battery put in after it was designed as a combustion car. Pure electric cars that are designed in a different way, and when you get into cornering, handling, braking, steering, I think there's a big amount of differentiation you can do there.

TG: But you get your platforms from the VW Group . How much you can personalise them, what parameters you are able to change? How do you Cupra-ify an ID.3, what are the parameters that you're able to meddle with to get the Cupra DNA into it?

WG: Things like ‘boost on demand’, the sporty suspension, how you put the suspension in, the steering, the brakes, the whole handling experience. And we're looking to do even higher-powered versions of the Cupra el-Born.

I've driven both [the ID.3 and the el-Born] and I think the Cupra is ‘a Cupra’. It is important that the Cupra stays authentic, in terms of handling.

WG: I would say we call it ‘impulse’; you can have power on demand. You have pure acceleration and then when you need it, a push-to-pass button to go faster.

TG: What about old-school petrol hot hatches, where Cupra made its name?

WG: We will try to do a higher performance, high-horsepower version of the Formentor in ‘the old world’ with the [Audi 2.5-litre turbocharged] five-cylinder engine.

TG: As you move into electrification what are the biggest challenges of getting people to convert into this brand?

WG: From a Cupra perspective, it’s [convincing] people that EVs don't have to be just rational. They can be very emotional and sporty, and can prove that there's no contradiction between electrification and performance.

Secondly, generic across the whole industry there has to be an infrastructure there. I think one of the biggest worries people have is the lack of infrastructure on charging. We're working with different companies on that within the group and also in Spain with Iberdrola, but with Elli, one of the Volkswagen Group companies in Germany, to try and speed up the implementation of the infrastructure.

By offering the performance plug-in hybrids on Cupra Leon and Cupra Formentor, we have two different plug-in hybrid models, I think we offer the customers a first step to try that without being totally exposed. If they don't find anywhere to charge the car, they can still be mobile!

Plus, governments really backing electrification is a way of improving CO2 emissions. I think you see in the markets of Northern Europe, it seems to be going from North to South, so even you see the Scandinavian countries and then you've got the Dutch and the UK market - very committed, Germany is starting to move fast now and will move increasingly faster. I think the Southern European markets [need to] to catch up.

TG: What’s the timeline when you think electrification will be so ubiquitous and the infrastructure so readily available that it isn't even a consideration anymore. How far down the road do you think that is?

I think the next big game changer for the big volumes coming in will be the urban electric vehicles. That’s something we want Seat to play a key role in, to electrify Spain. But also to come up with a Cupra electric car for urban use.

The smaller [the cars are] the bigger the challenges get. So obviously, the battery technology and battery costs have to improve. [We can’t] fall into the trap of the old world with small cars [meaning] small size is small money. We have to break that with the small electric car.

TG: Do you still see personal ownership as the sole way to make the small electric car work in the inner city?

WG: To do the car sharing thing, to make money off a very low cost solution, there's no brand identity. The motivation for car-sharing is to get from A-to-B as easily and cheaply as possible.

We are more into looking at offering mobility solutions for the younger next generation that are flexible in terms of subscription. So, pay us if you want the car for six months. You’re not tied into a long-term lease.

TG: So a smaller electric car is something you're considering, but with the larger scale performance vehicles in the VW Group like Porsche’s Taycan and Audi’s e-tron GT coming up this year, do you have aspirations for a halo car above the Tavascan?

WG: I think we have to go step by step building the brand. We’ve got a Cupra Leon, we've got a Cupra Ateca, we've got a Cupra Formentor within three years. And we're going to have a Cupra Formentor five-cylinder by the end of the year. We're launching el-Born, the first fully electric car. We're working on getting the Tavascan, I told you we're working on a small car, but we can only manage as much as we can. We're quite a small organisation within the company, and we're doing a lot of things very fast.

I think the other [companies] in the VW group are doing that exceptionally well. We certainly don't want to be a competitor for Porsche or for Audi. That's not our ambition. But there is space between the mass segment and premium cars. Whether that has to be another crossover SUV, I don't know.

I think that at some time, somebody's going to have to make the break. We have to come up with something else [aside from SUVs]. That could be something for Cupra, a new body style that fulfils the demand. And it's not just another SUV or crossover design, because there's going to be a lot of cars in that segment.

TG: Moving onto motorsport, how fundamental is racing to your future?

WG: I think the whole issue of motorsport needs to be reinvented because it's got boring and nobody goes anymore, at least at the race tracks. Even with Formula E – it needs to become more entertaining.

It needs to be sustainable. I think you have to prove that, otherwise racing down the track burning a lot of fuel will get slaughtered by environmentalists.

For me, Extreme E linked all of those things - entertainment, excitement and sustainability. It needs to be something people want to watch and enjoy. And Extreme E could do that. We're the first manufacturer brand to decide to go in very early when nobody else was in, and now the team's moving on and Lewis Hamilton's going in with a team and it’s gaining momentum.

TG: What's your end of year report in two years' time? What do you need to have achieved for Cupra to be deemed a success?

WG: They won't give me two years. You don't get that long! Cupra was one of the very few brands in the world last year that actually grew sales, despite the market being down 20 to 30 per cent we were able to continue growing Cupra in a COVID lockdown. The Formentor has to fly, and that will be the first proof point of this year.

TG: Obviously you have a Formentor to drive, but do you keep anything else in your garage?

WG: I treated myself to something since I've been in Spain, a car that can be driven properly in Spain because of the weather. It’s from 1966, because I was born in 1966, and it’s an E-Type Jaguar. At least now I have it in Spain, I can drive it all year round. 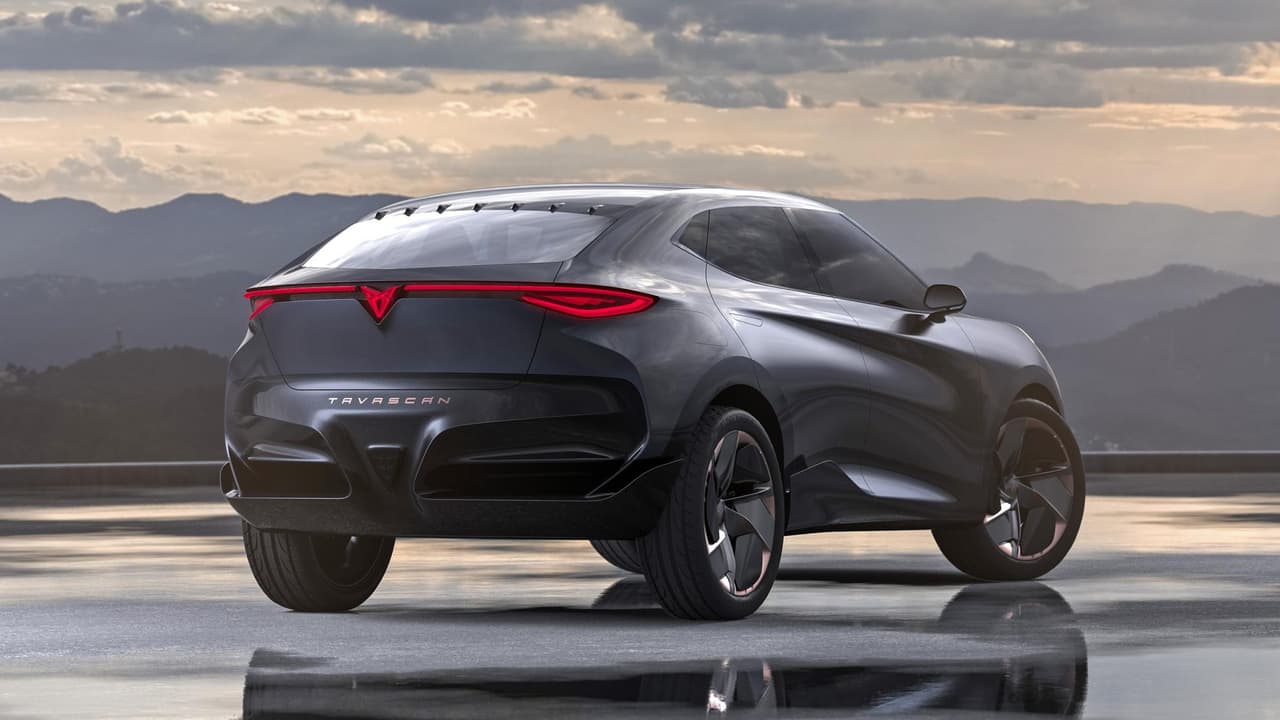