When it comes to the brave new world of electric pseudo-SUVs, is there any point in paying a premium?

I know this looks like two worthy, pleasant, middle-of-the-road cars in the middle of a pleasant B-road. But what I present to you here is nothing less than an epoch-shaping cataclysm in the future of car sales.

Buying a premium car has, for some time, not been for the rarity. Thanks to cunning lease deals and the sheer proliferation of bodystyle niches, the likes of an Audi, BMW or Mercedes-Benz are wantonly attainable. The Ford Mondeo dies this year. BMW’s 3 Series is its bedrock, its core model. As far back as two generations ago, ‘Mondeo man’ was morphing inexorably into a baby-Beemer.

That was right around the same time as Skoda crawled out of Christmas-cracker joke status and began to get its VW-bankrolled act together. And in the same way that a human being shares 85 per cent of its DNA with a zebrafish, you’ll be aware that a Skoda Octavia is genetically identical behind the grille to an Audi A3. Most of what makes an Audi A1 could be swapped wholesale into a Fabia. Skoda is now a legitimate, likeable purveyor of common sense machinery that doesn’t require excuses. Audis still have some cachet. Day follows night. The world makes sense. 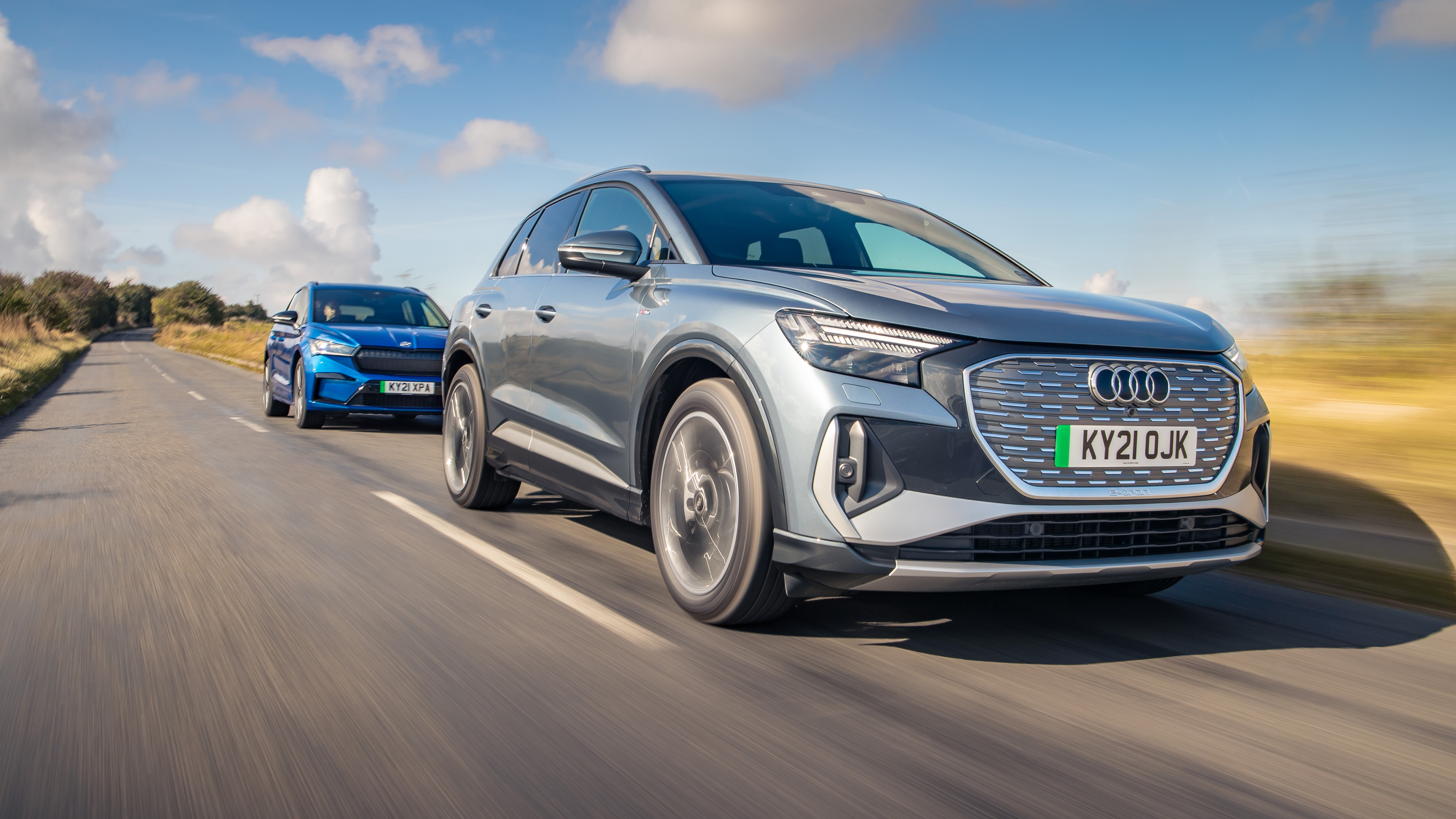 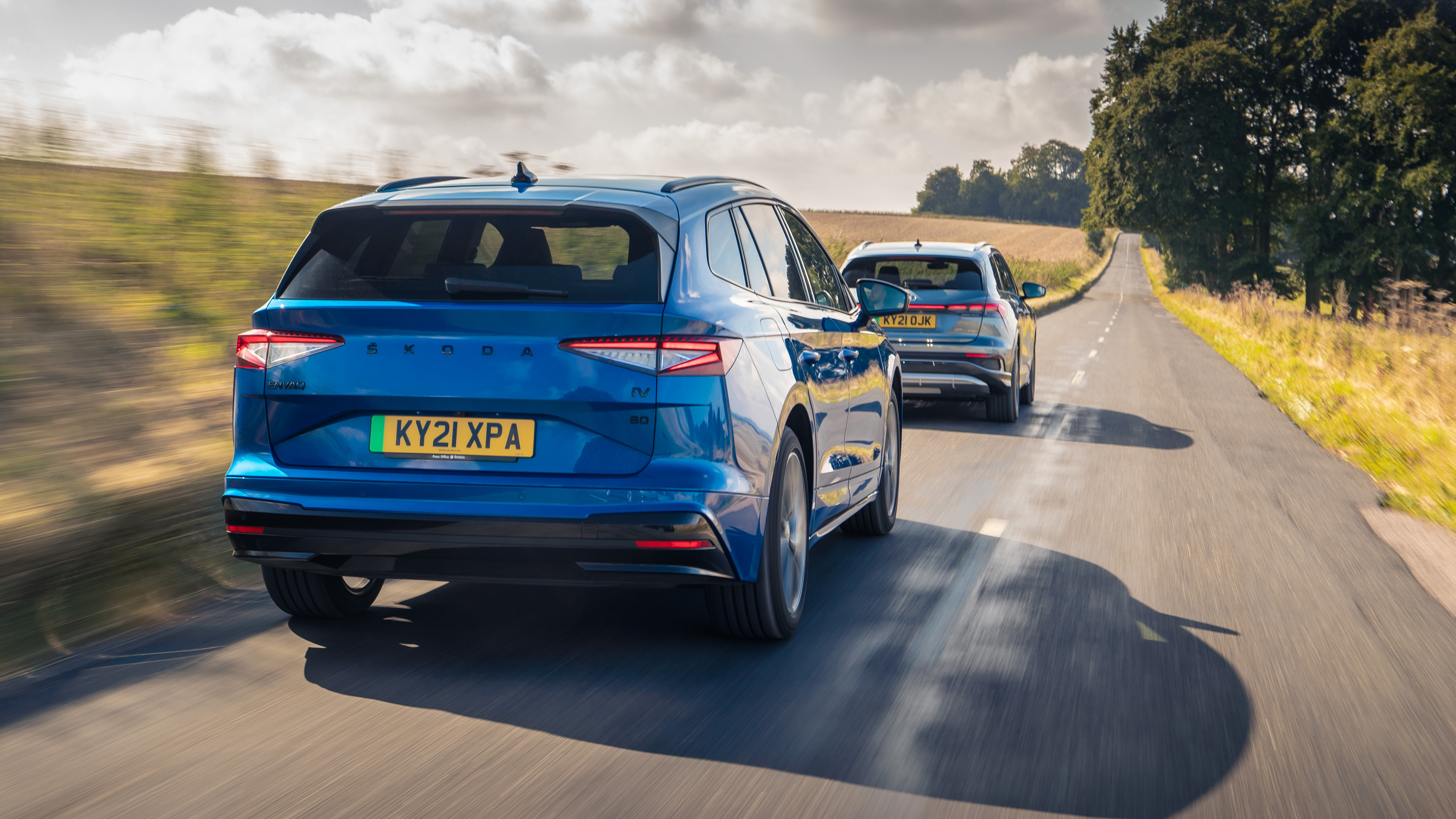 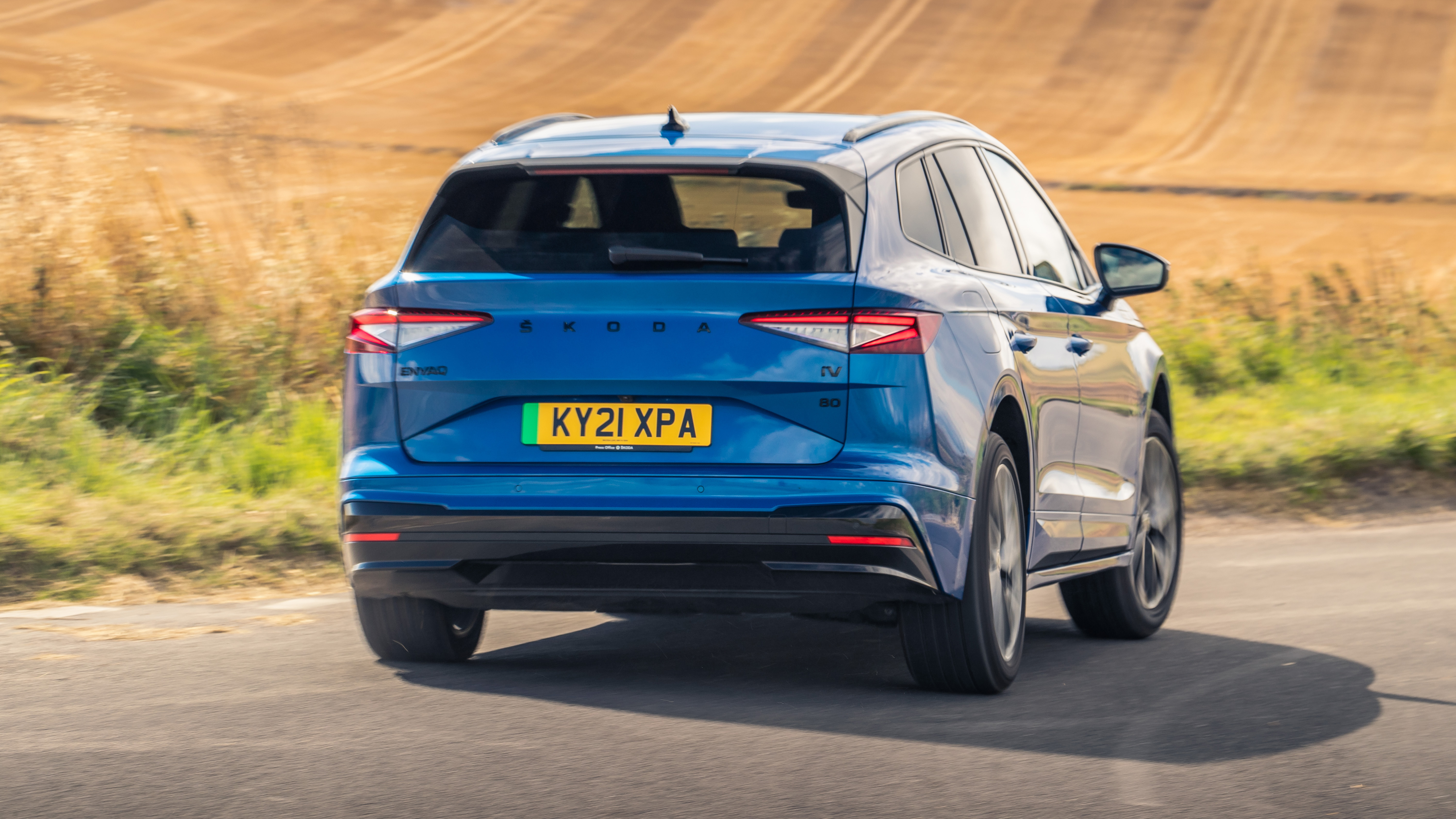 But as we enter the electric age, the premium set is going to have to work an awful lot harder to justify its continued existence. Case in point: this twinned offspring of the Volkswagen Group’s MEB platform. The bespoke battery-powered, stretchable architecture that supports VW’s own ID.3 hatch and ID.4 crossover has, as you’d expect, been recycled into two new stepchildren. The Enyaq iV – Skoda’s first fully electric SUV, and the Q4 e-tron: Audi’s smallest, cheapest EV to date.

And the hard facts are these: the Skoda uses the same batteries as the Audi. It’s offered with the same motors which deliver identically seamless performance. They’re almost equally heavy. Both are festooned with digital displays, LED illuminations, and the same fleet of driver assistance aids.

And yet while the cheapest Q4 e-tron is yours from just over £40,000, the entry-level Enyaq’s sticker price is £8,000 cheaper. For that the Skoda goes slightly further on a charge, recharges marginally quicker and qualifies for the sub-£35k-only £2,500 government grant, which no electric Audi does.

These, predictably, are not entry-level cars. This Q4 e-tron is a Launch Edition, sporting the bigger of the two available battery packs (77kWh useable) and the most powerful motor: a 204bhp rear-drive unit. If you want a faster Q4, you need to go all-wheel drive, which curiously isn’t allowed on the debut model.

Here’s where the lines start to blur. Skoda has done an Audi. Too many of the Enyaq’s talents are cost-extra add-ons. Upping charge speed from a lethargic 50kW to 125kW (meaning an 80 per cent charge is on-board in 34 minutes) costs £440. Adaptive cruise control with lane and blind spot assist – which doesn’t half take the pain out of a stressful five-up family long-haul – is a £685 extra you can only select once you’ve added a heated steering wheel with flappy paddles for winding up the re-gen braking. Strange. Rather flies in the face of all that ‘simply clever’ marketing Skoda drapes over its unpretentious wares.

After a day of driving these cars back to back, their dynamics became more blurred

Course, the Enyaq has all that. Umbrellas are hidden in the front doors. The tailgate conceals an ice-scraper, the cupholders are shaped to grip a bottle for one-handed opening, and best of all, the rear headrests feature fold-out wings to support your bonce if you fancy a sleep. So, well-rested passengers and no cricked necks. Genius. None of the above comes as standard – or optionally – in the austere Audi.

No, Audi instead loads its Q5-sized five-seat crossover with deeply familiar, unscary Audiness. The ‘Virtual Cockpit’ instrument display, the sharp 10.2-inch touchscreen and the climate control panel (thank you for buttons, common sense reigns) are all exactly as the intended audience will remember them from their Q5 or A6.

But whereas Audi cabins used to be infallibly plush, here there are missteps. The shiny piano-black effect trim around the drive selector lozenge and volume touchpad was already starting to attract dust, scratches and fingersmears in this sub-1,000 miler. Access to the stowage beneath is compromised by this jutting Pride Rock of plastic.

Then there’s the steering wheel, which incredibly features two utterly baffling decisions. The first is the shape, which is weird, and the second is the touch-sensitive control pads on the upper spokes. Upping volume or switching radio station are eyes-off-the-road tasks as a result. I thought ‘premium’ meant a product that was slick and effortless to use, like a iPod Nano or a Pure radio?

Being closer tied to the VW / Seat mothership than Audi, the Enyaq has inherited dumb ideas like a touchey-slidey volume gutter and too many critical controls buried in its telly-like touchscreen.

Happily said screen features large, easy-to-prod menu tiles and the smartphone connectivity is more reliable than VWs we’ve tested of late. Tell you what though, you’d struggle to point to an area where the Skoda feels, looks or smells palpably less expensive than the Audi. So there are a couple fewer metal fillets about the vents. Perhaps the Q4’s door releases with a more assured thunk. But a several thousand quid gulf? Nowhere to be found. 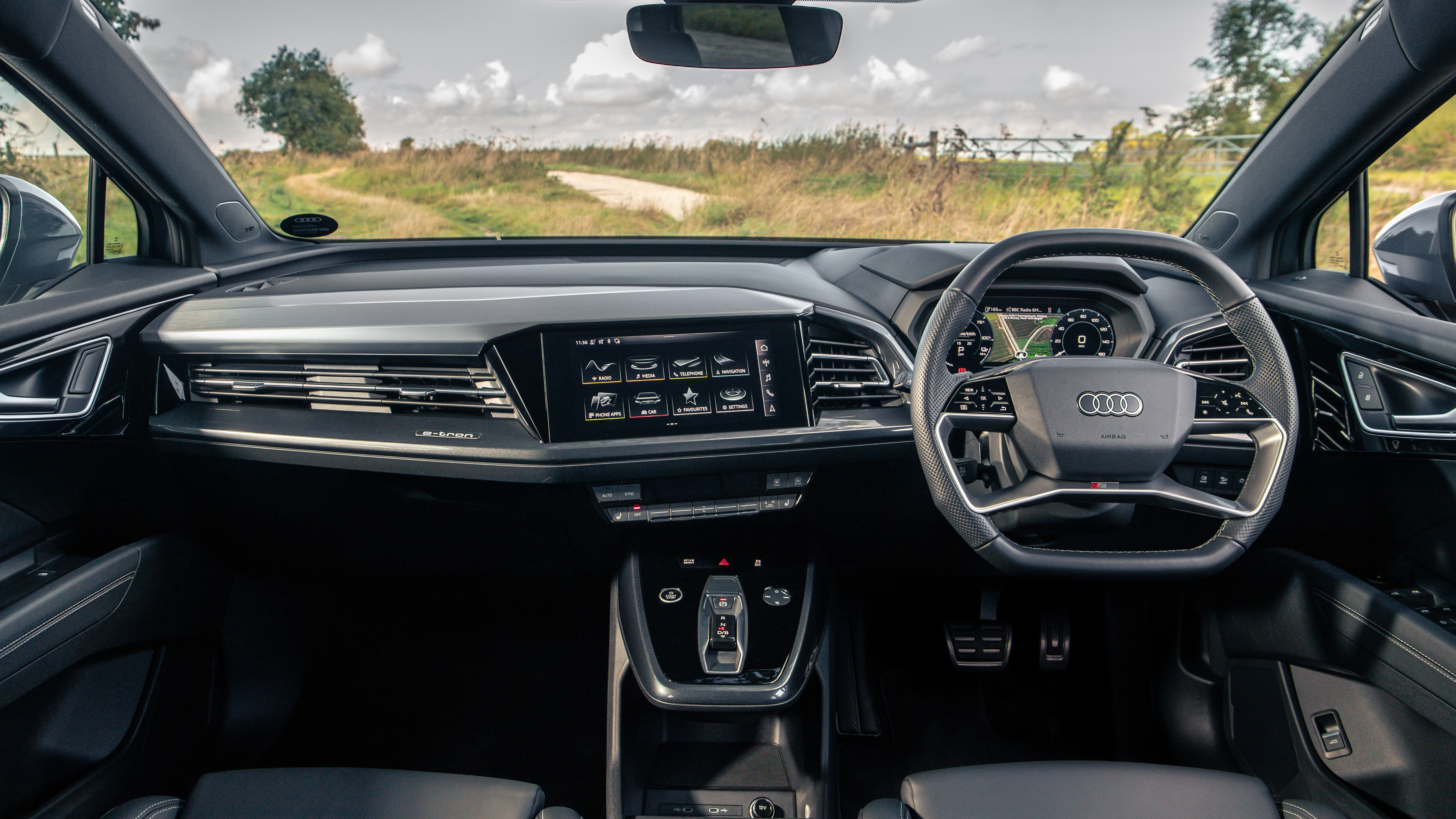 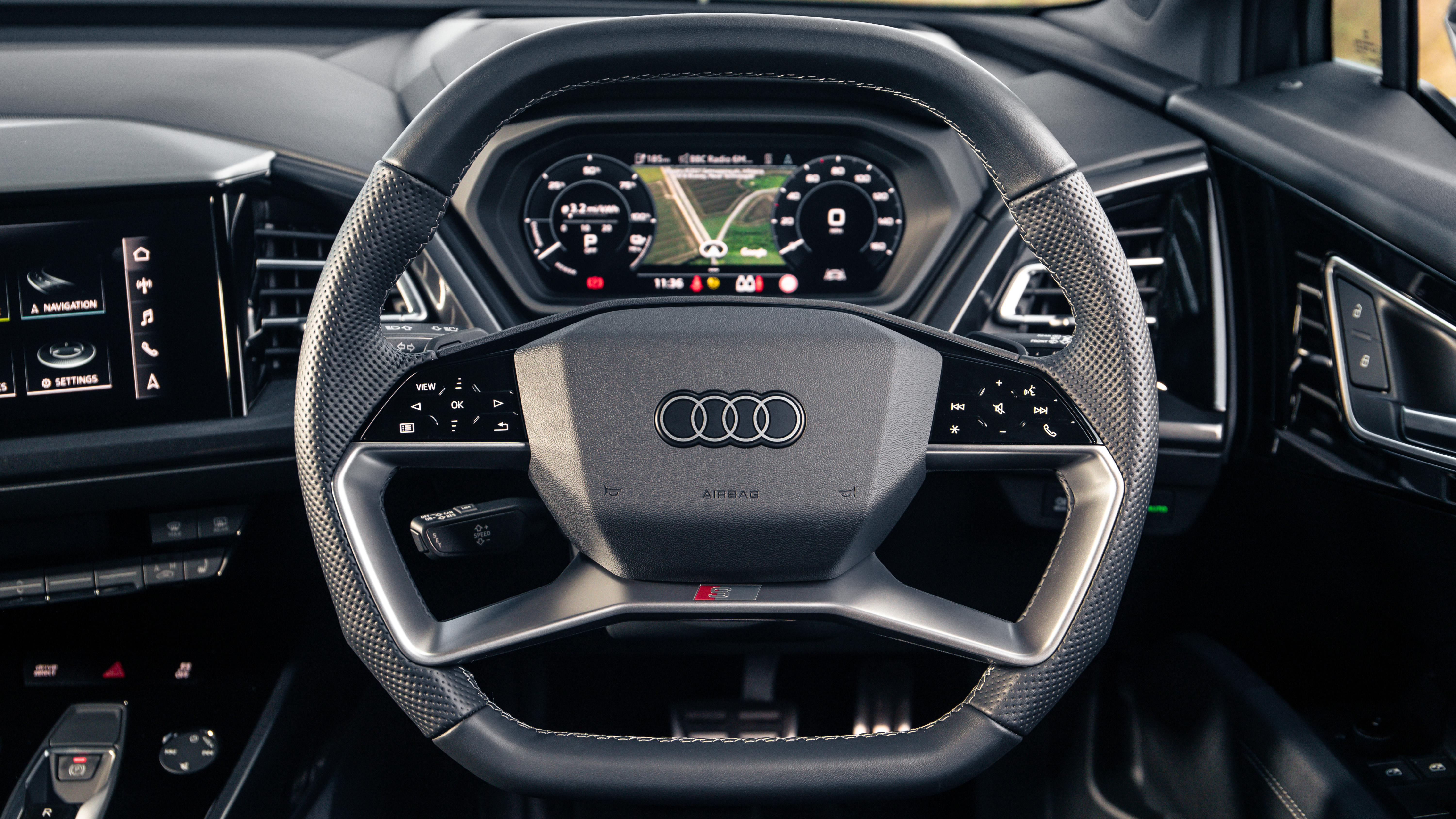 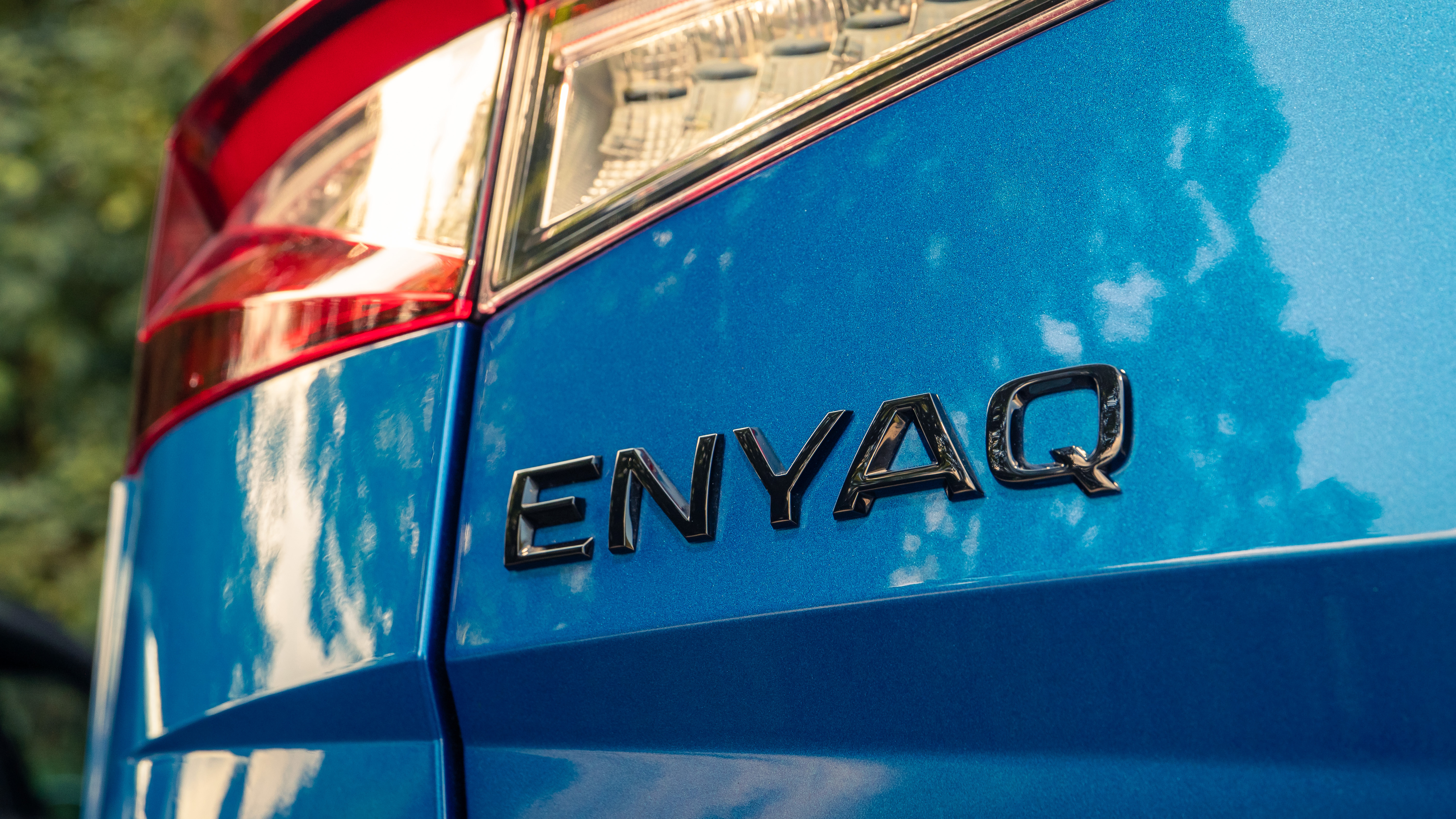 If you’ve become uneasy that we’re tumbling headlong towards the end and still haven’t addressed fundamentals like boot space, packaging or what-it’s-like-to-drive, the very good reason for that is they’re nigh-on impossible to split.

The Skoda’s more squared-off posterior makes for a larger boot and the subterranean well to stow the charging cables is easier to access, but both cars would have benefitted no end from leaving space under their long bonnets for a cable-tidy. Instead, they’re full of electrical gubbins and not a single litre of useful frunk-age.

Adults seated behind adults: a doddle in both cars. The Skoda is a tad glassier. A ‘coupe’ version of the Audi is already on sale, called the Sportback. A swoopier Skoda copycat comes later. Surprise!

After a day of driving these cars back to back, their dynamics became more blurred. Both are swift from standstill but not overtake-hungry. The Audi perhaps rides a fraction more firmly. This Skoda’s (optional) adaptive dampers have a deeper plushness in Comfort mode despite enormous wheels.

The battery’s low centre of gravity counteracts the lofty ride height to a point, but neither resists body roll. Neither is dramatically more engaging or grippy than a Q5 or a Kodiaq. Both are equally impressively quiet, with only wind rustle around their bulky mirror disturbing the peace.

Both cars averaged 2.8 miles per kWh at a motorway cruise, quickly bumped that up to 3.0 miles per kWh when some slower in-town running afforded re-gen opportunities, and neither can be driven as ‘one-pedal’ cars, because it doesn’t do to overegg the re-gen when you’ve only got a motor out back. Real-world range on a mild autumn day was 230-240 miles for both cars: this Audi claims 305 miles, the Skoda 326.

So, two chronically well-matched cars marred by a couple of design stumbles, but fundamentally sound high-riding family transport. But if you demanded a reason of me to buy a premium-badged EV versus a badge engineered supermarket own-brand version of the same ingredients, I simply can’t think of one. Where does premium go from here? How much does badge cachet matter to you? Funny how owning a Skoda used to mean you didn’t know anything or particularly care about cars. With this, it’s the exact opposite. 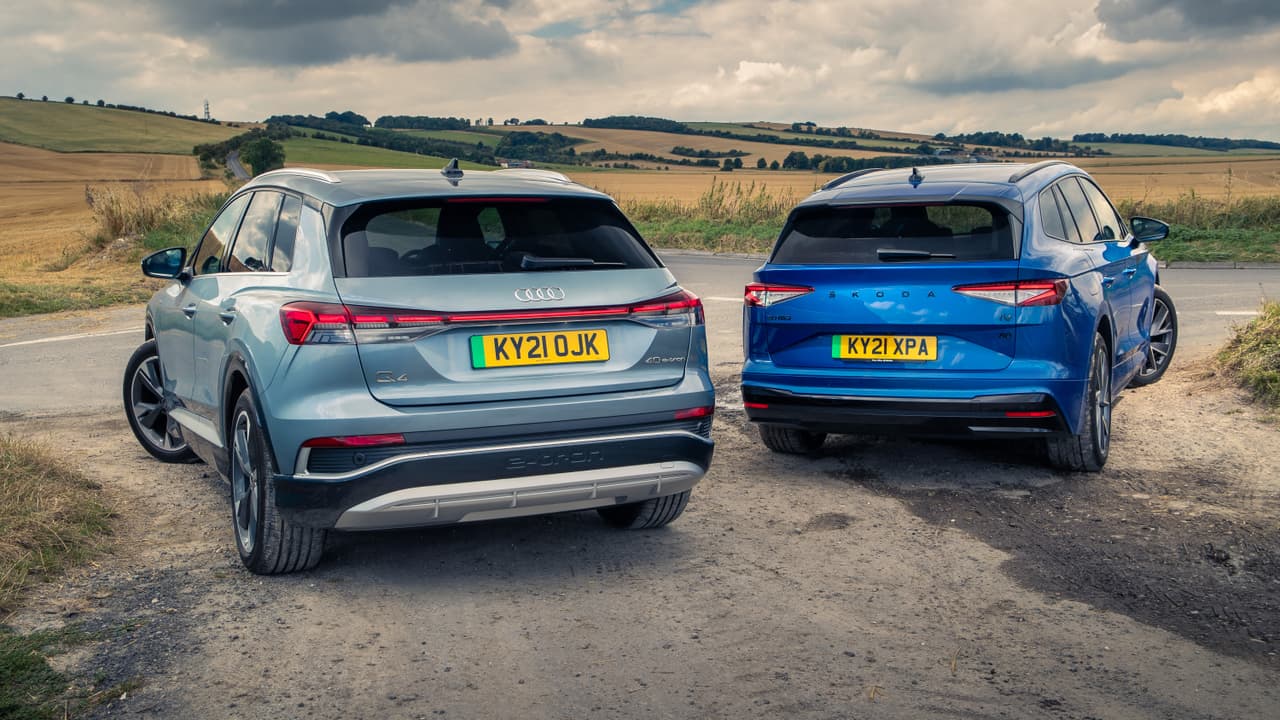