It’s been a bonanza year for Yankee performance cars. We gather 2,245bhp in the Californian desert to sacrifice some tyres

A fist in the face often offends, but – on the upside – it doesn’t leave you in any doubt about the perp’s intentions. It’s the same thing with America’s latest muscle and supercars. They don’t bother with subtlety.

They know you want as much power, speed and smoke as your dollar will buy and to not spend too long dressing it up, thanks very much. The net result is these three almost cartoonish cars you see here.

Why these three? They are simply the trio of US performance cars which most impressed us over the past 12 months. Each of them, as discussed when we first drove them, expresses the term ‘performance’ quite differently. But each one melts your mind with the way it converts fuel into fun.

There’s a bit of Hollywood presentation, stars and stripes patriotism and Fourth of July celebration in each one. But there’s also some Google, Apple and SpaceX-type tech and sophistication in there, too. So they are not to be underestimated.

Let’s start with some headline numbers. These three characters muster no less than 2,245bhp between them, yet you can drive away in all three for less than $300k – or the same price as one McLaren 720S. And that’s far from the whole story. 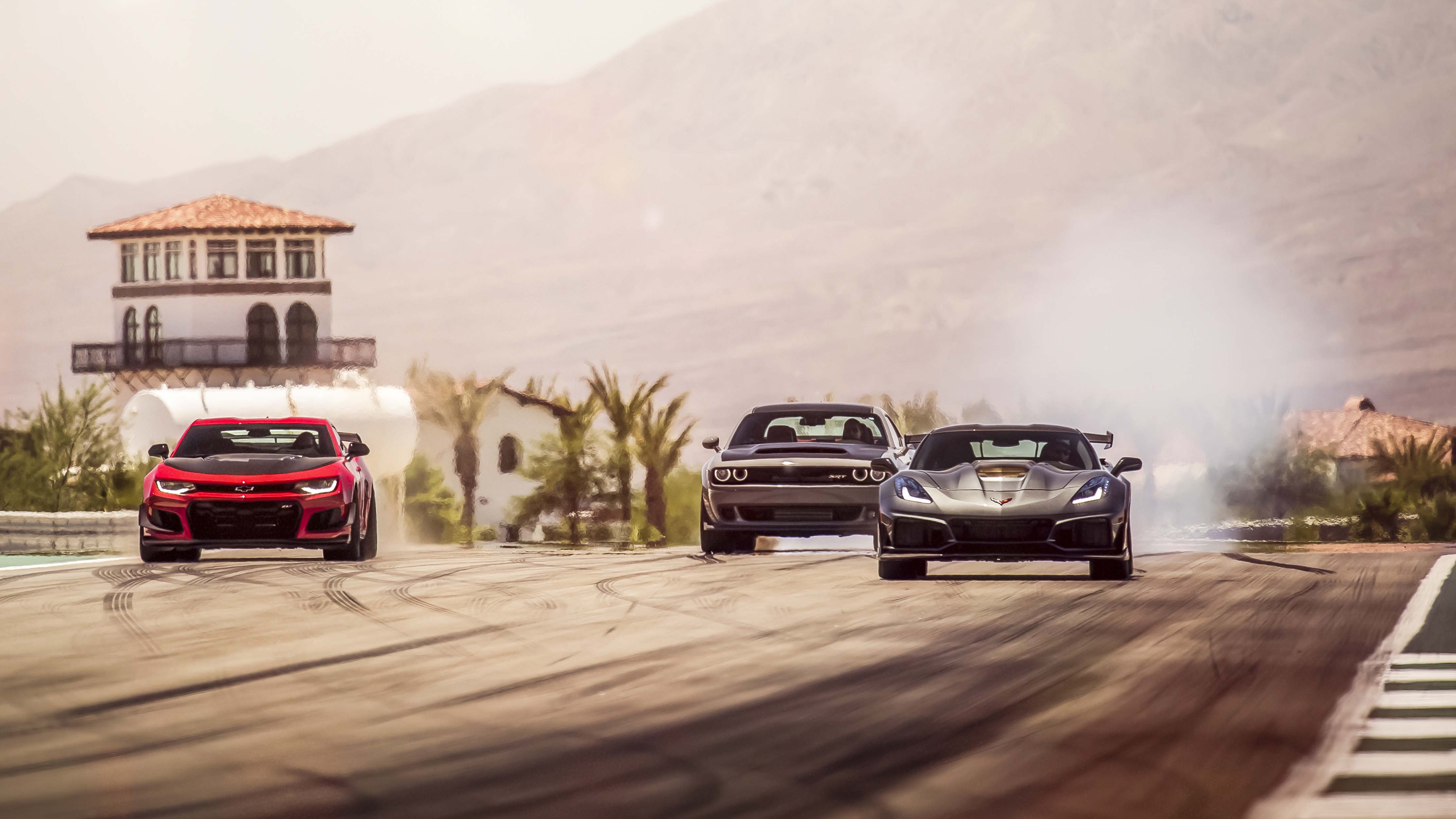 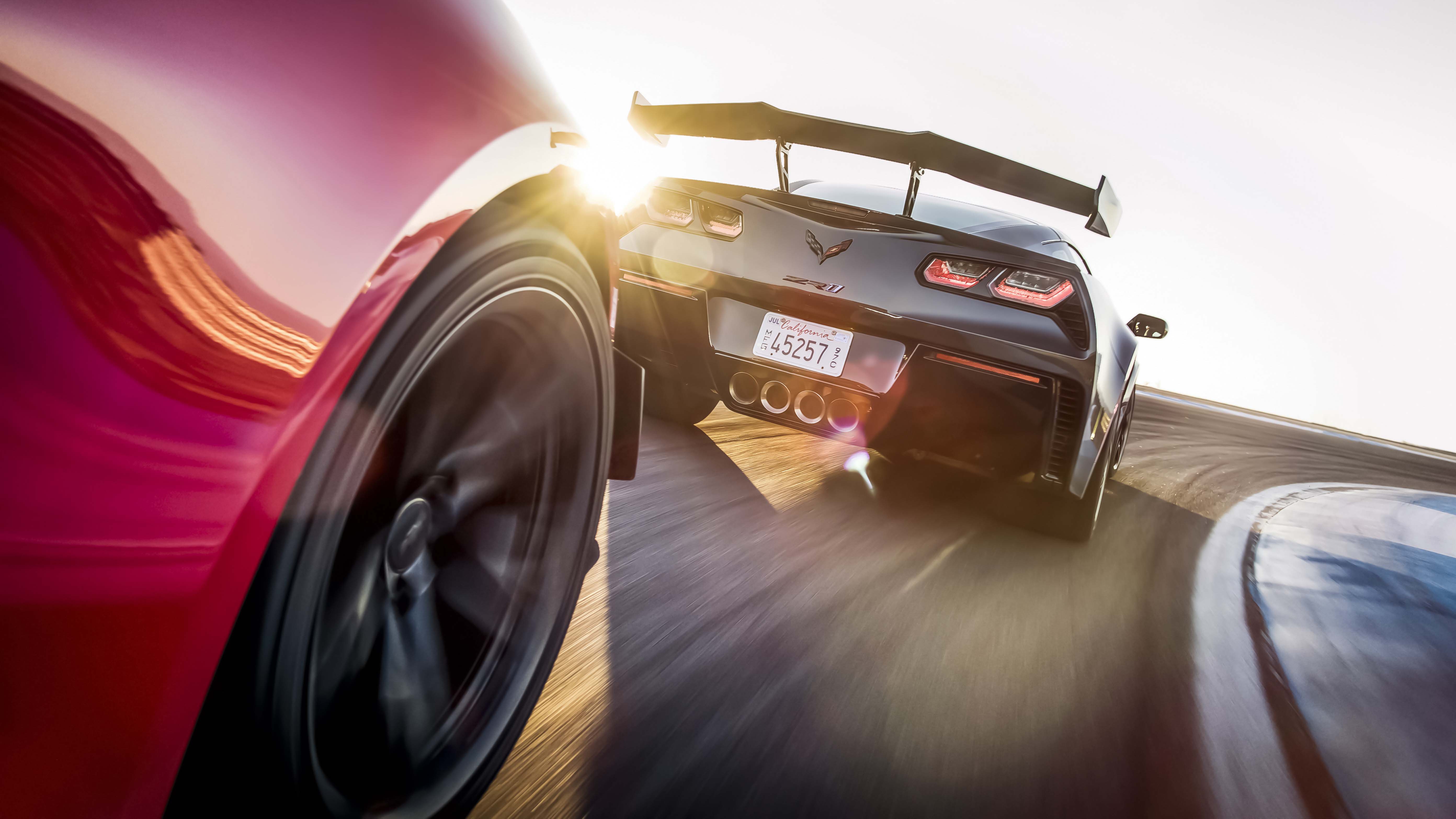 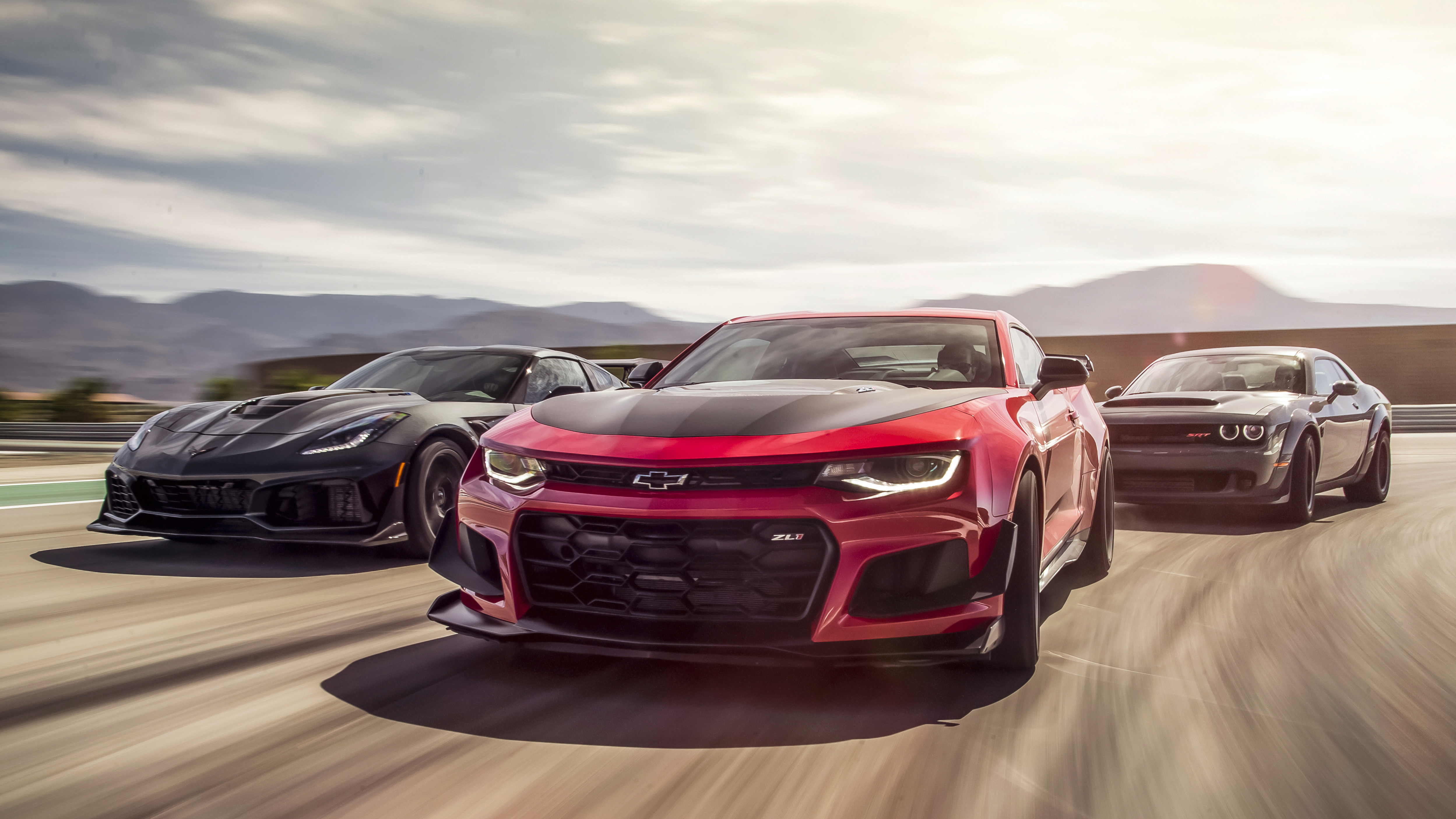 In our first experiences with each earlier this year/late last year, we also discovered the Demon, in the right conditions, will do a sub 10-second quarter-mile and pull wheelies while doing so. The ZR1 will give you an all-American thrill ride that’s unmatched in all-round ability. And the Chevy Camaro ZL1 1LE will deliver a track experience that could embarrass a Porsche 911 GT3 RS.

Let’s start with the most obvious outlier, the Dodge Challenger SRT Demon, to give it its full name. This road thug is like the cockroach of the car industry – time, economics and trends just can’t kill it. Based on a platform that ex-parent Daimler stopped using for the E-Class right after the turn of the century, and topping a range that starts with a V6-powered, narrow-tyred, budget model, the fervour around the Demon initially makes no sense whatsoever.

Then you see it, hear it and drive it and it makes all the sense in the world. Fill it with 100-octane petrol, punch a few buttons on the dash and you are transported to a world of warm, humid Saturday night muscle-car heaven. A place where cornering prowess is secondary and all that matters is getting down the 1,320 feet as quickly, loudly and impressively as possible. And, boy, does it deliver.

But only if you really know what you’re doing. And you’re on the right surface. Anyone can spin up the fat drag radial tyres and make clouds of smoke. But to get it to launch properly, you need real skills. For those who think that drag racing is simply holding the car on the brake, then stamping on the loud pedal when the lights go green, the Demon is here to set you straight. 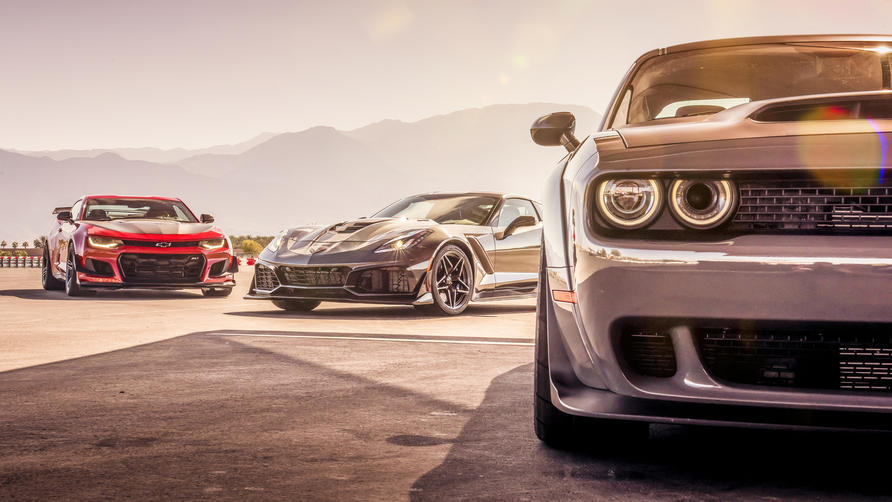 Set the car in Drag and it prepares for battle. You get access to the 840bhp mode, the suspension softens the front rebound damping, to help weight transfer – contrary to what you might have heard, the rears stay the same; Dodge tried softening off the rears too and the car went slower. All the cooling from the aircon flows to the engine, so the cabin heats up. And you can engage the transbrake.

In this configuration, on a prepped surface, with the skinny front wheels fitted, saving 30lb off the front axle, the Demon’s 315-section Nittos will dead hook into the surface and shoot the car forward, front wheels hovering just above the track, faster than any other petrol-powered production car on the planet. Never mind one that weighs well over 1,800kg.

But you have to have the reactions of a ninja to correctly sequence the release of the transbrake – by letting go of whichever shift paddle you are holding in – and then roll in the power. So it’s something you need to practise and can get better at, which makes it all the more enjoyable and satisfying when you do. The fact that the Demon has a warranty that allows – encourages you, even – to do this is worth an award all on its own.

As is the fact that you can drive this car every day and never feel that the hyper performance in any way impinges on your comfort or practicality. The cooled and heated seats are huge and well upholstered, there is a 17-speaker sound system, and the boot would hold enough luggage for a transcontinental trip. Plus it looks simply insane.

Yet that still is not enough for it to take top honours in this shoot-out. As good a drag car and daily driver as the Demon is, it’s no circuit star. That’s why we have these two Chevrolets here at the heat-hazed, immaculate track complex at The Thermal Club outside Palm Springs.

Typically, these aren’t prime conditions for either car. The Z06 Vettes typically have a habit of calling time early on the track when temperatures rise much above 32ºC, but Chevrolet has listened and learned from this. The latest ZR1 packs a new LT5 twin-injector motor under – or rather through – its carbon-fibre bonnet, which is so powerful, tractable and generally efficient, it embarrasses Europe’s finest.

As the last of the C7 Vettes before the company switches tack to the mid-engined C8 model sometime next year, this ZR1 is the ultimate current-shape Corvette in every sense of the word. With 755bhp driving 1678kg, it’s almost got more power than the chassis can handle. Or at least that’s what it feels like to drive at first. Even with the super-clever Performance Traction Management in its least intrusive track mode, you still get the sense that it’s quite busy keeping the car in line. 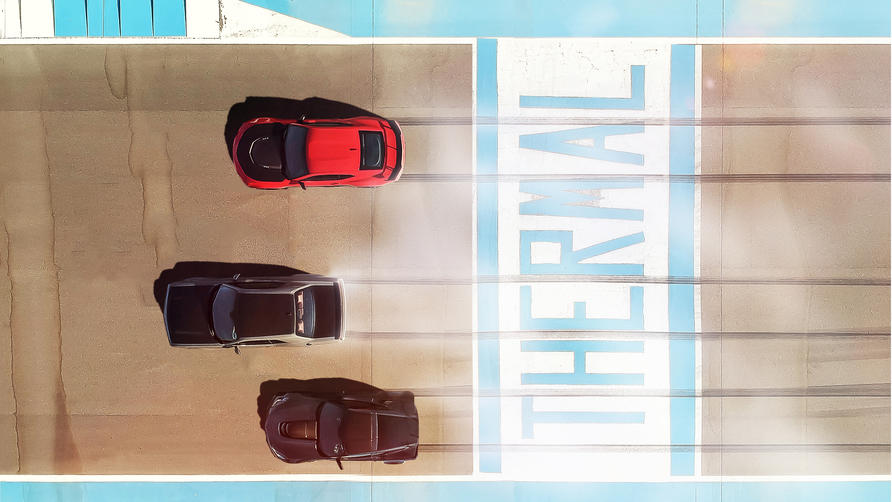 But once you get used to it, which takes less than a lap, you can push this car to speeds you might not believe at first. Witness the Chevy development team’s lap of Virginia International Raceway while shaking down a new part – they smashed the Ford GT’s lap record by more than a second. And they didn’t even know it until later.

Handing the ZR1 to ex world drifting champ Dai Yoshihara, who you see here shredding the tyres, was also interesting. Microscopically sensitive to car set-up, he got out of the Vette as impressed as the rest of us with the power and immense braking ability, but still not 100 per cent happy with the non-linear way the car’s chassis systems intervened when cornering.

So rather than push it to a point that it failed – something none of the cars here did in the extreme 46ºC heat, which was impressive – we agreed that the ZR1, which also does a fine job of being an everyday car should you want it to do so, feels very much like as far as the C7 platform can go. And that the mid-engined C8 will be welcomed when it arrives in a year or so.

With that near-orbit performance level, you’d think the ZR1 has enough to see off the ZL1 1LE. And you’d be right in most numerical, Top Trumps ways. It is faster, stops shorter, has a higher top speed, weighs less. And so on. But what those numbers don’t show is how the driver feels behind the wheel, the width of the grin, the heart rate, the dopamine rush… Using these as a guide, it quickly became clear that the fast red Camaro was becoming our favourite.

It just has that immediate feel within the first few rotations of the wide, special Goodyear-tyred wheels that it’s a very sorted thing. You sit low, almost stupidly low, in the car and peer, racecar style, over the instrument cluster. The competition seats hug you just so, and it’s got a manual 6spd rev-matched gearbox. So it all feels right from the off.

What those numbers don’t show is how the driver feels behind the wheel, the width of the grin, the heart rate, the dopamine rush…

And it just gets better and better from there. It doesn’t have any of the Vette’s giant carbon brakes and active damping – just a set of Multimatic DSSV dampers which can be very simply adjusted for road or track. In the latter mode, once the tyres are up to temperature, the big car gets up on its toes and dances around the track, flattering driver inputs by being responsive and forgiving at the same time. This inspires confidence which increases speed and makes you happy. Then you get out, look at your lap times – twice, just to make sure –and realise you’ve gone faster than you thought possible.

The Z06 engine, which had so many heat issues in the Vette, is absolutely fine, too, as there’s more space for cooling here. So you decide when you stop, not the car. Which is as it should be. What’s absolutely not, is that the 1LE cannot be imported to the UK because of pedestrian-protection regulations, due to it bristling with thigh-slicing carbon fibre dive planes and the like. But someone will surely work out a way to get one across the Atlantic. When they do, we’ll be waiting for them.

So what’s the final finishing order, then? As I mentioned before, it is really only between two cars, the Corvette and the Camaro. The Demon is long sold out, so has been consigned to hall of fame history. You can get a Hellcat Redeye, which has the big-breathing motor, but not the drag shocks, transbrake and other special drag goodies. So it’s not quite the same.

Which is true of the two Chevys. They might come from one brand but they couldn’t feel more different from each other. The Vette is lighter, faster but ultimately more synthetic. The 1LE Camaro – a muscle car as extremely developed for the circuit as the Demon is for the strip – just feels better, more honest and predictable. You might go faster in the Corvette, but you’ll have more fun in the Camaro. So, with that knockout punch, it’s the Camaro that wins. 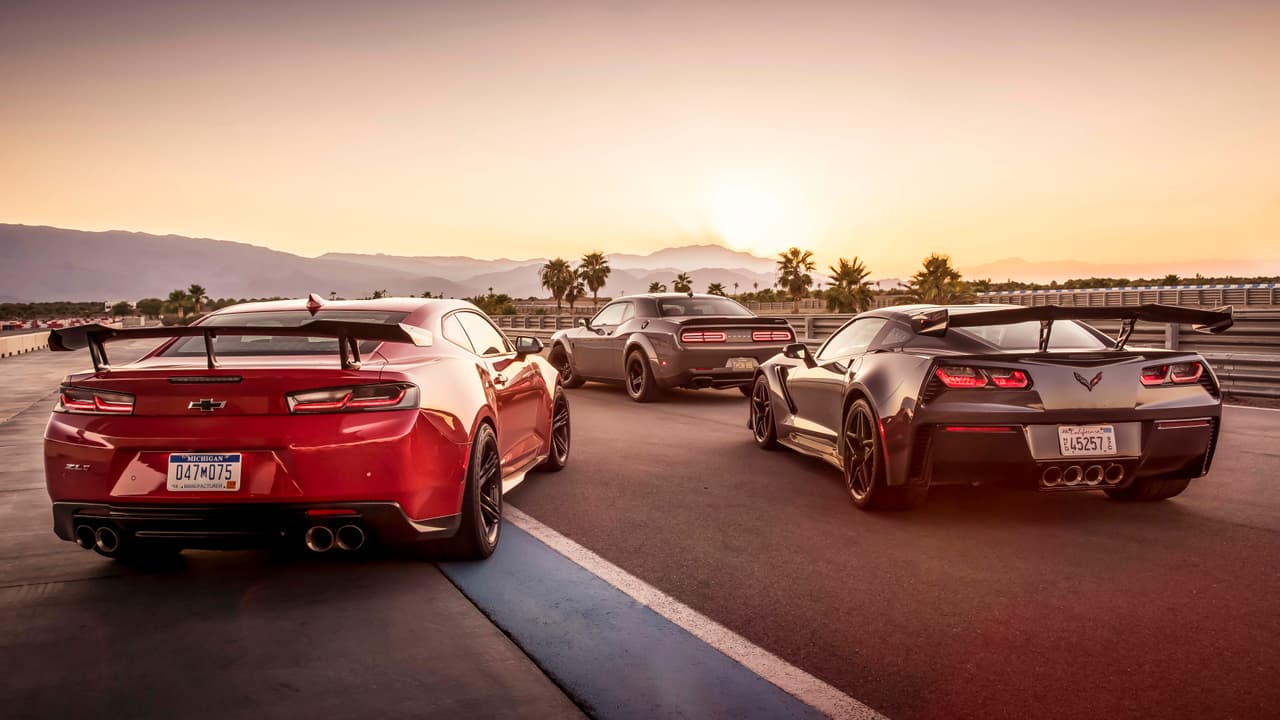