Can a Porsche 911 Turbo S make it up a ski slope? | Top Gear
Advertisement
Big Reads

When it comes to driving up ski slopes, Top Gear has unfinished business. Time to put that right

Four years ago, almost to the day in fact, we had the bright idea of driving a Ferrari up a ski slope. At the time it made sense. The FF had four-wheel-drive, four seats and 651bhp, which is about 650bhp more than your average chairlift. So off we went, north to Scotland’s Glenshee Ski Centre where we travelled precisely one car length onto the piste before sinking into the slush, wheels spinning like circular saws.

In fairness it wasn’t the Ferrari’s fault. Even a proper off-roader would have struggled on the melty slope, which until that particular morning had been locked in a deep freeze. Whatever, we thought, as a Land Rover pulled us free. We’d be back. All we’d need is a good, hard frost. And so, with parts of the Cairngorms recently dropping to -15C, Britain’s chilliest lows for years, it felt like a good time to give it another go.

This time, to avoid embarrassment, we’d use something even more suited to the job. A Porsche 911 Turbo S. Well, we did have some 911-sized studded tyres leftover from TG mag’s icy extravaganza in Sweden (read about it in the next issue), and – fun fact here – it’s 30 years since 4WD first appeared on a 911, with the 964. Who doesn’t like a good anniversary of the introduction of a four-wheel-drive system, eh? Or to put it another way, we needed no better excuse to hit the slopes again. 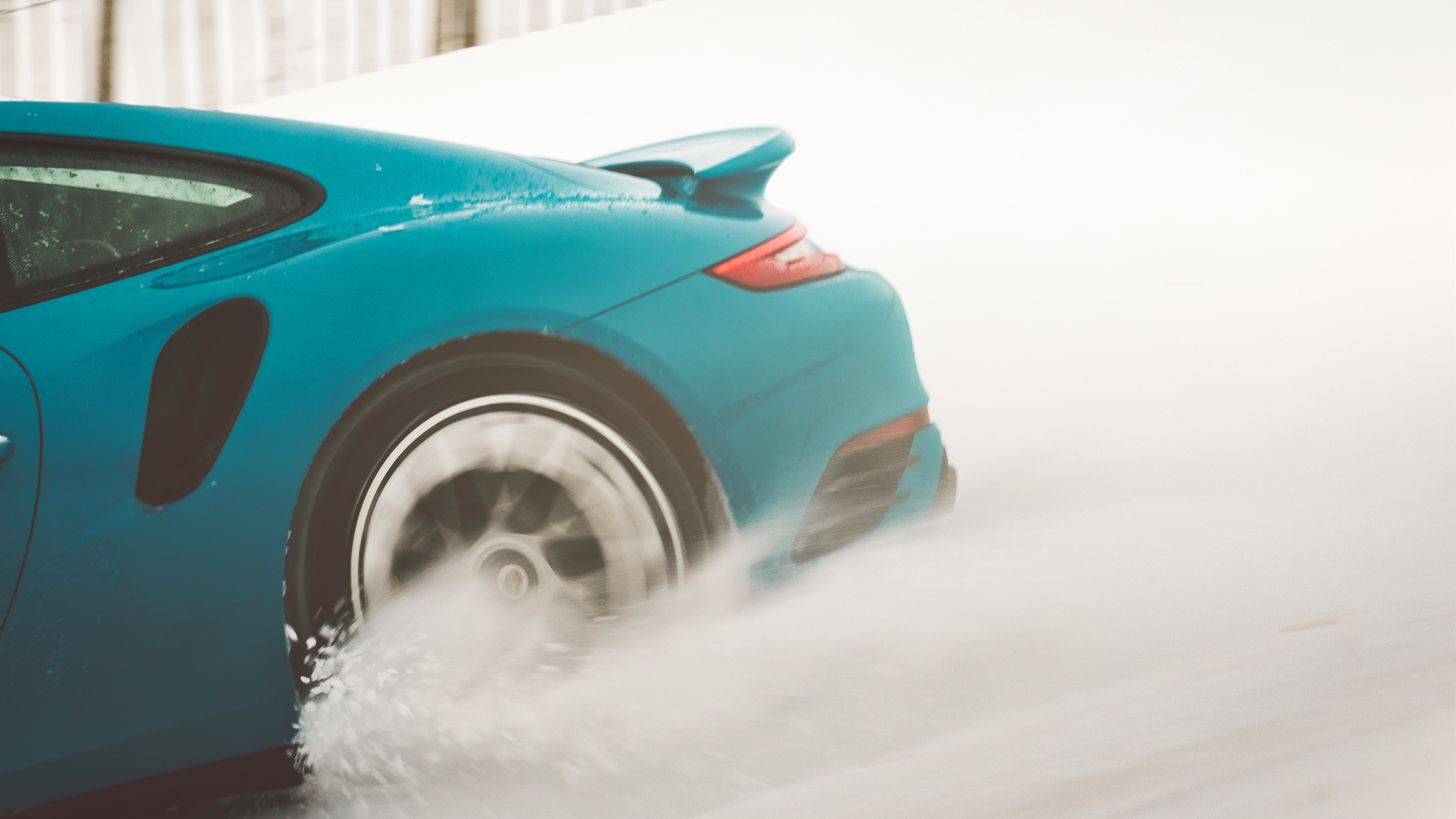 So off we went, up the A93 and over the Cairnwell Pass, which at 2,199 feet above sea level is Britain’s highest public road. It runs right through the ski centre, cleaving the slopes on either side. In all, there are over 22 miles of official runs at Glenshee – one of which, the somewhat optimistically named Sunnyside, had been closed especially for us. Because apparently there’s nothing worse than oncoming traffic on a downhill run. This time, as we pulled off the road to the foot of the piste, a few centimetres of hard packed, ice-crusted snow took the weight of the car. Frost: hell for tomatoes, heaven for 911 Turbos.

How do you drive up a ski slope? I’ve no idea, but if you want to start a fight in Scotland – and this is by no means the only method – simply ask the same question to a group of locals. Within minutes I was surrounded by six men with strong opinions on the matter, ranging from “mind those wee brown bits” to a more scientific “just give it some welly pal”. While the debate continued I turned off the traction control, selected first on the PDK ’box and opted for the latter advice.

Now, 580bhp is quite a lot, and even on snow the Turbo S is alarmingly good at deploying it all. Suddenly the slope reared up and put me in the sort of seating position usually enjoyed by plane passengers shortly after takeoff. For the first 100 yards I pretended to look calm, pinning the throttle under a heavy boot and turning the wheel this way and that, as if picking the perfect line or correcting little slides. In truth, I wasn’t.

It’s not the 911’s natural habitat, and to slightly misquote Albert Einstein, you shouldn’t judge a fish by its ability to climb a tree. But if you saw a haddock up a horse chestnut, it would probably stick in the memory

Worse still, I’ve never even been skiing. Couldn’t tell you the difference between a powder hound or a planker. In ski-speak, I’m a blue-run, bunny slope beginner.

I probably should have mentioned this before shooting off, leaving a comet tail of snow as the 3.8-litre flat-six boomed around the mountainside, breathing great lungfuls of fresh Scottish air while the turbos shoved in more for good measure. But then I lost my way, lifting for a second and turning into deeper, softer snow which stopped us dead. I rolled slowly back to the bottom, where I received yet more helpful advice before having another shot. This time: a longer run-up, more speed, a different line closer to the edge.

What I hadn’t realised is that the wooden fences at the edges aren’t just there to catch cartwheeling skiers, but to trap the snow, making it deeper at the sides. On top of that, because Glenshee is in a national park with all sorts of environmental protection, they can’t landscape the hills like they might in manicured Alpine resorts, so the white stuff hides all sorts of lumps and bumps. Trying to read it, especially if you’re a snowblind amateur, is impossible. So instead I just guessed. The result? The world’s first ever uphill slalom. Winter Olympics organisers, you can have that one for free.

All that wiggling around is bad for momentum, and momentum is the key. Let’s be honest – something like a Cayenne with long suspension and plenty of ground clearance would plough through it all, but what would you rather see at the summit? Alright, it’s not the 911’s natural habitat, and to slightly misquote Albert Einstein, you shouldn’t judge a fish by its ability to climb a tree. But if you saw a haddock up a horse chestnut, it would probably stick in the memory.

With that in mind I had another go, but about halfway up, the bumps were too much and the powder too deep. Which was annoying, because the car coped fine with the gradient of about one in three. That’s as steep as the steepest section of the Hardknott Pass, the steepest road in the country. Try climbing that in any other sports car after heavy snowfall. Time to call in some help, in the shape of the PistenBully 600, a piste basher sporting a 12.8-litre diesel with 1,400lb ft of torque and steel tracks that spread its 12-tonne weight over the soft surface.

Usually its job is to groom the slopes overnight, smoothing the snow so skiers glide over it. It also happens to be an excellent tow truck, albeit quite an expensive one at around £300,000. With a £150,000 Porsche dangling behind it on a strap, that’s nearly half a million quid of kit tied together on a very slippery slope. Thankfully it didn’t take long to pull us free from the thick stuff, over a ridge and onto an icy plateau, where the Turbo was let off the leash.

Of course, the first thing you do in this situation is a celebratory donut, creating a micro blizzard around the car. Then you do several standing starts to see how much grip you really get from those studded tyres (specially sourced ‘Lappi Winters’, made in Sweden). The answer is a lot. Almost enough to keep up with the snowmobiles we’re using to ferry the camera crew around. At 295mm wide at the rear and 245mm at the front they’re slightly narrower than the Turbo’s normal ones, but who’s measuring?

By now the altimeter was reading 2,490 feet. We’d climbed almost 100 vertical metres, into the clouds that squatted on the summit. We really were in the wild uplands, driving along a mountaintop surrounded by the Cairngorm’s humpback peaks in every direction. Over to the east you could almost make out Balmoral Castle, the Queen’s modest Highland bothy. The road, far below, looked more like a black stream, then it disappeared from view as we crested another ridge towards a drop-off point for the clanking ski lifts.

There are 21 lifts at Glenshee, the busiest of which carries up to 2,000 people per hour, and all of which have an English name and a Gaelic one. There’s ‘An Tom Dearg’, or The Red Hillock, ‘An Càrn Bhalg’, or the Hill of Bags, and my personal favourite: ‘T-Bàr’, the Gaelic for ‘T-Bar’. You can’t argue with that, I suppose. 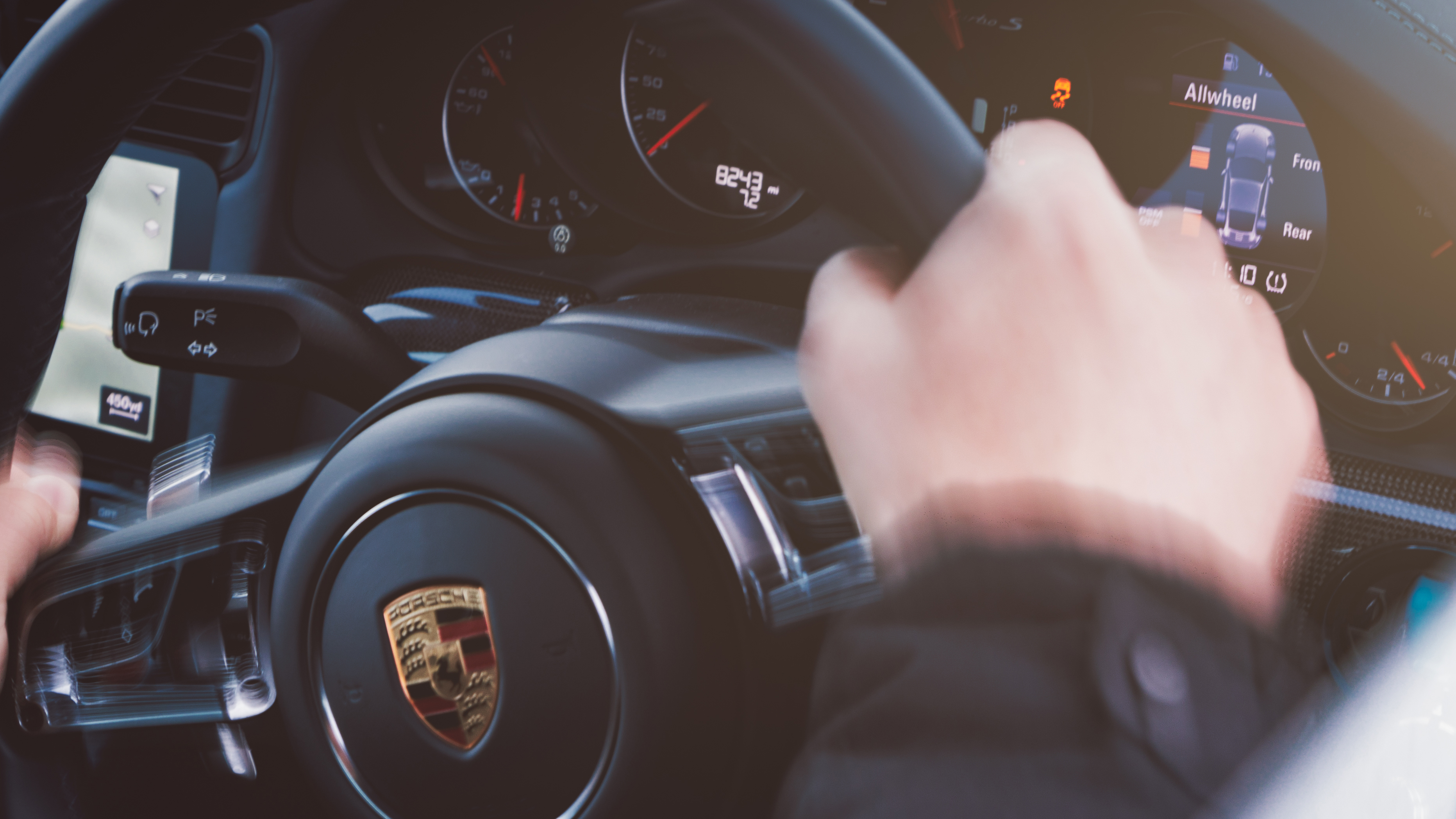 Having conquered the piste it was time to come back down again. There’s only so long you can make small talk with snowgoers until they realise you’re taking up valuable slope space during half-term week, one of the busiest of the season. Especially when an impending snowstorm threatened to close the main road (indeed, the day after we left, a lorry jackknifed on the way up and the snow gates were pulled across the carriageway, blocking the route in from the south).

Having failed to find the racing line on the way up, I decided to follow an expert on the way down. Two experts actually, Willy and Farkie, who’d been looking after us all morning on their ski-doos. Willy’s advice? “Follow my tracks and there’ll be no bother. Oh, and none of that bloody loud pedal, OK?”

Not wishing to feel Willy’s wrath, I did precisely that… before overtaking on the outside and letting gravity takeover. Oops. The bumps that stopped me on the way up became takeoff ramps on the way down. And you know how downhill skiers come to a graceful, sweeping stop in a puff of power? I’m going to pretend that’s what it looked like when the carbon ceramic brakes thawed, stopping me from crashing into a plough shed. At the bottom, a skier swished over, the Miami Blue 911 reflecting in his iridescent goggles.

“What the hell are yous doin’?” he said.

“Driving a car up a ski slope”, I replied.

“Because the Ferrari didn’t make it”.

“Aye”, he said with a nod, before swishing off. 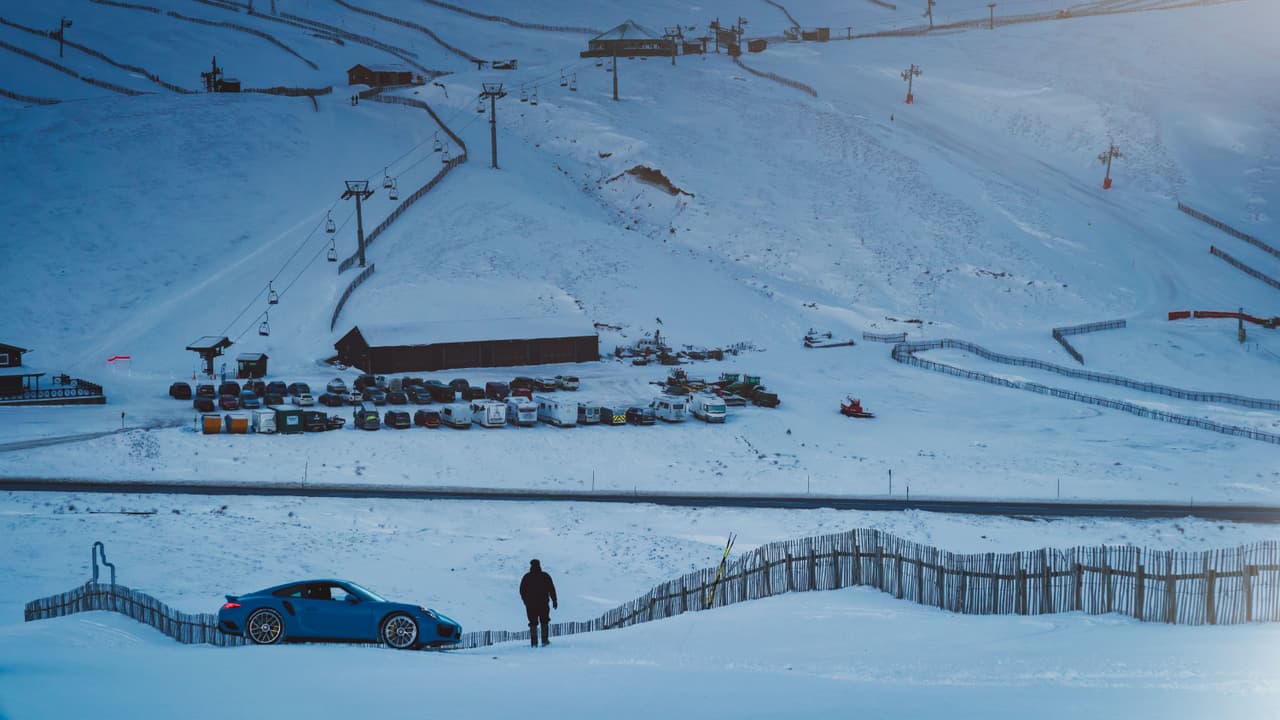