Eagle, Alfaholics, Singer, GTO and Bond’s DB5: they all contain lessons modern supercars can learn from

I have a recurring dream in which the chief engineer of the latest, pointless 800bhp supercar is standing there, telling me how great his new creation is. “Zero to 150mph in seven seconds, 230mph top speed, Inconel headrests, blah blah.” My face has the blank expression of a man who no longer cares.

And I stop him, and I say: “Here are the keys to an Alfaholics GTA-R. Please go and drive it, and then tell me that your car doesn’t feel like a massive blob of bloated turd after that little slither of perfection, and that these supercars totally miss the point because they are no fun to drive.”

Then I wake up and go to work and nothing changes. Another unpronounceable car company makes another unusable machine and people pay too much money for them.

And then, out of nowhere, the restomod scene emerges. Like Excalibur from the lake, it aims to slay these idiotic hypercars by reminding us why we love driving and what a truly desirable car looks like. And then some clever people abandon all pretence and just build new versions of old cars because, well, they look and sound more interesting than all of the new silly stuff being pushed right now. I mean, just look at these five machines – who really cares about the latest Bugatti Punani when you can inhale this level of beauty? 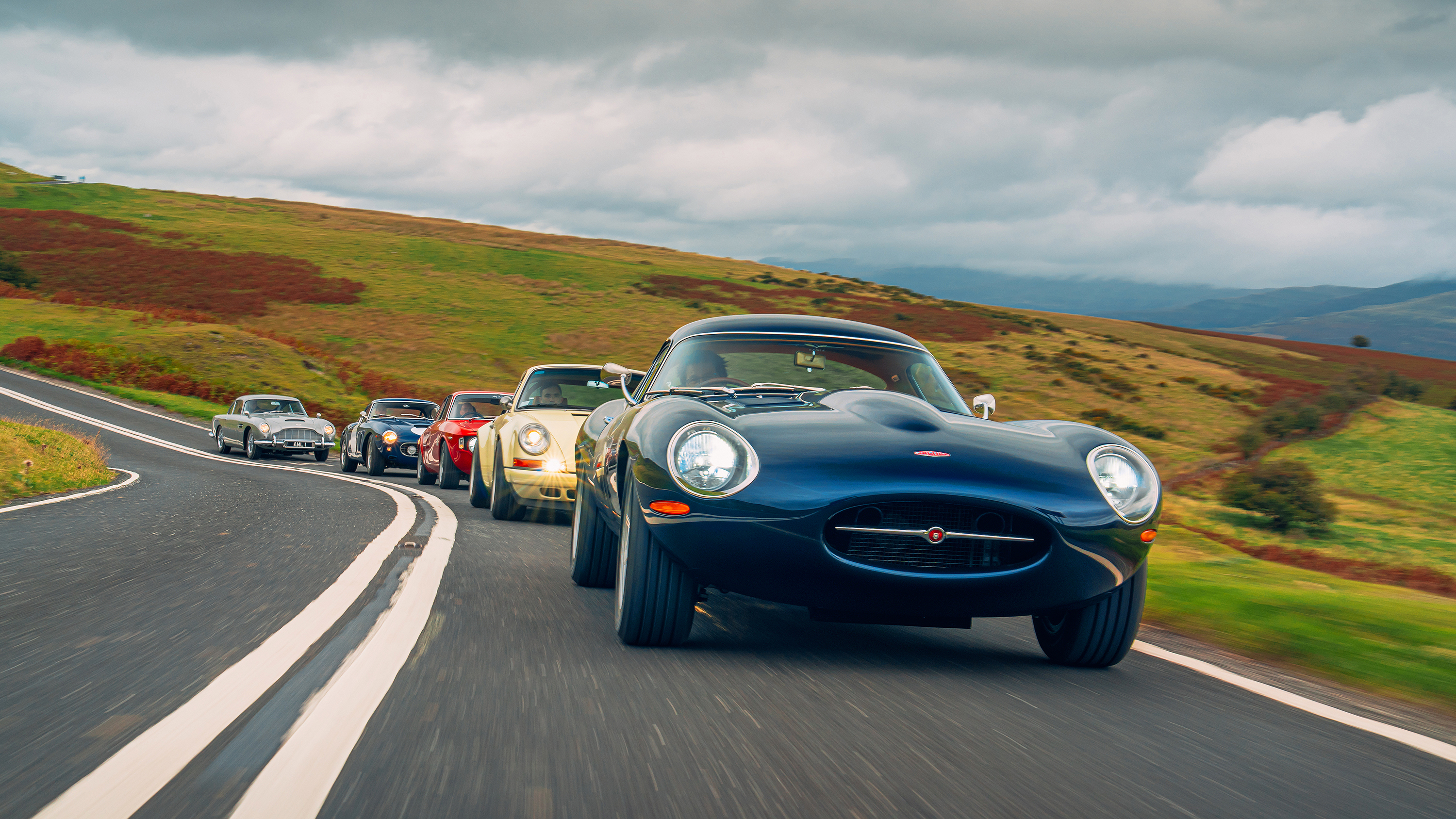 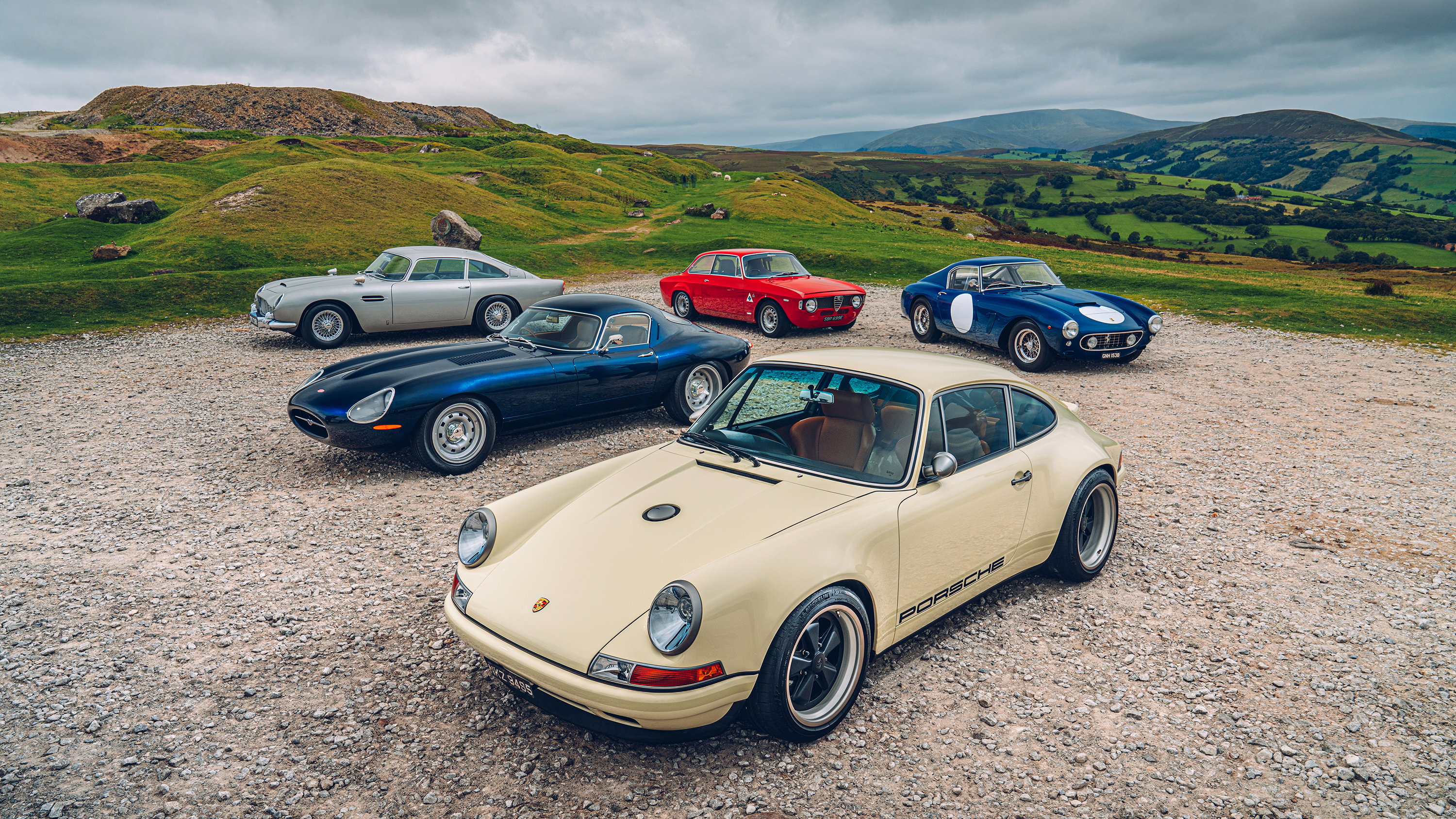 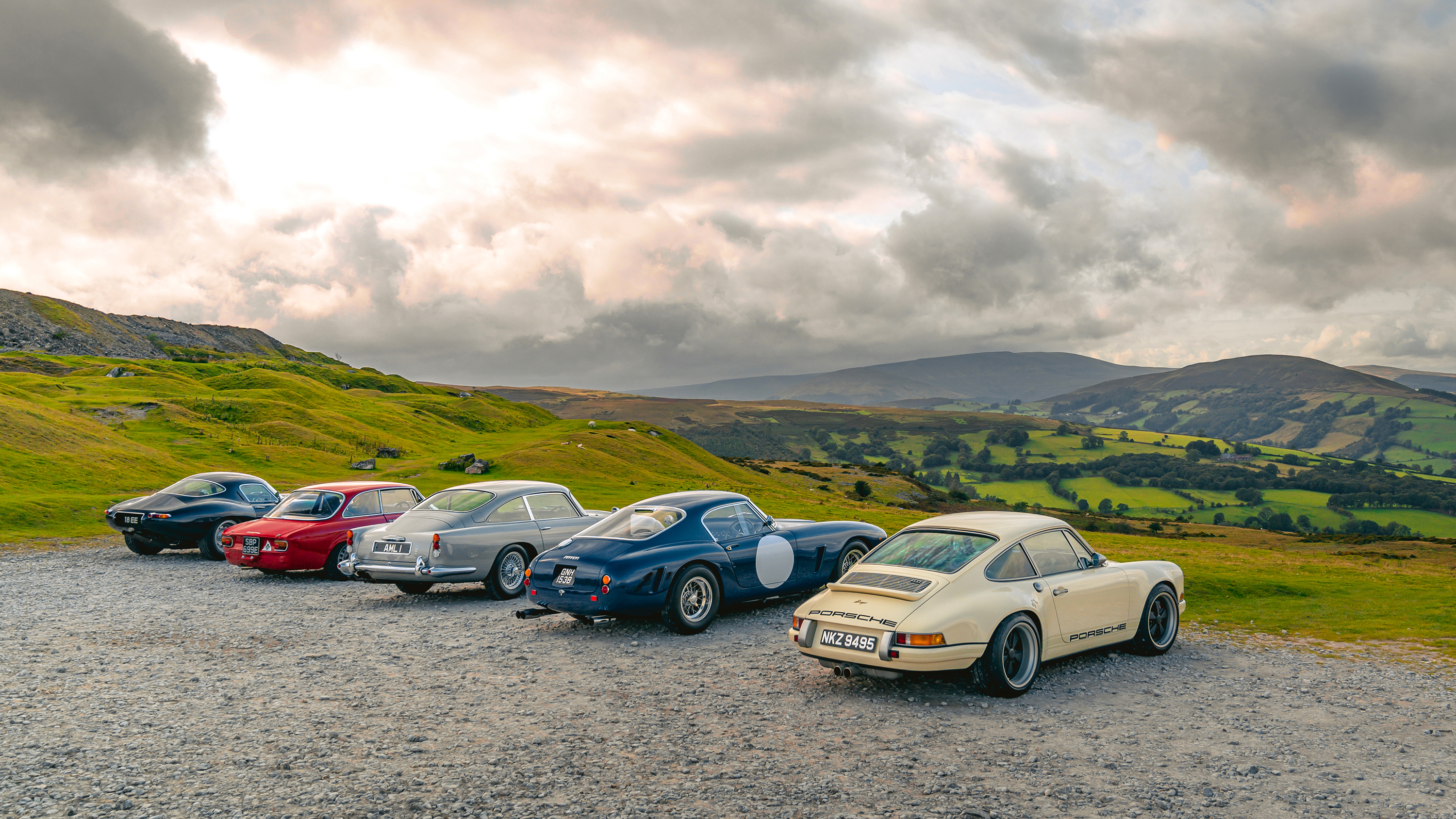 Take the Singer first – because, as you can probably tell, when faced with this line-up it really is very difficult to know where to begin. Born out of a dank warehouse and one man’s unhealthy obsession with butt-engined sports cars and modelling clay, the reimagined 911 has now become an industry all of its own. Restored and modified Porsches are everywhere, but the Singer remains the daddy of them all and for good reason – it’s the best.

Based on a 964 model Porsche, the Singer is the odd one out here in that it isn’t trying to exactly emulate anything that has been built before. Actually, the same can probably be said of the sensational looking Eagle Low Drag, but the Singer is at its heart a restored car designed to out-drive a modern one and offer a level of build quality and detail not found on any other machine that happens to look like a Porsche.

No two cars are the same and they’re known by the location to which they were first delivered. This one is called Somerset. The finish is stunning, the paint deep and liquid to the eye, the door catch clanks like an old 911’s should and then you have the joy that is the cabin. Woven leather seat inserts, flamboyant nickel-coated everything and a thin-rimmed Momo Prototipo to grip. The biggest question any Singer owner must face on a daily basis is how long to linger and drool over it as a static object and when to turn the key. Somehow, it is even better to drive than it is to behold. 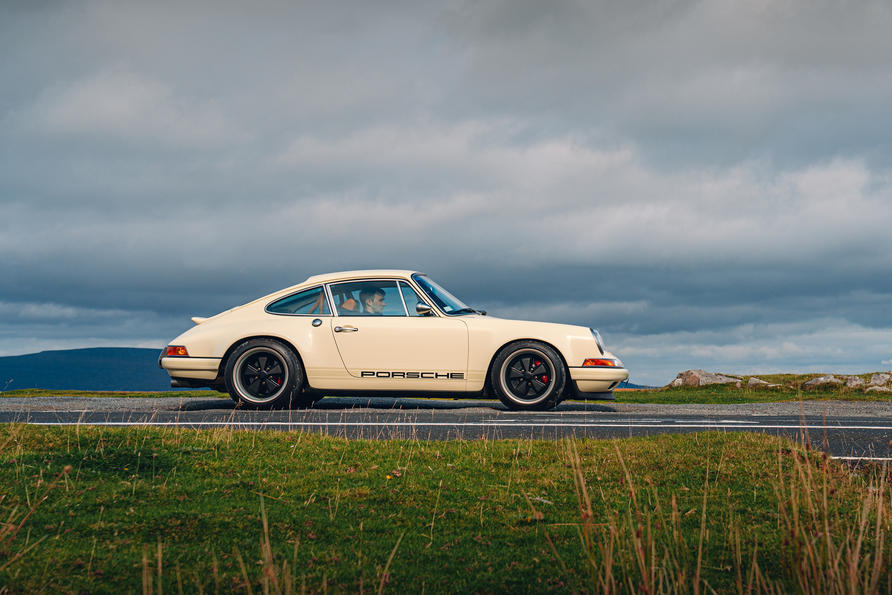 Around 1,150kg and with 400bhp, it’s a seriously fast car, modern GT3-quick and just so agile. It’s the only car here with power steering and as a result it feels way more modern – but the Singer magic is that it perfectly blends an old school set of control weights and sensations with a very modern ability to go fast. And the noise is just sublime. I could drive it for months, but time is in short supply today, and that GTO Engineering 250 SWB is winking at me.

At this point I’ll say something mildly controversial – I think the 250 SWB is the best looking Sixties Ferrari. The GTO is the holy grail and people pay the crazy bucks for them, but the SWB shape just does it for me – this blue car is in fact so utterly beautiful in the way it sits on those cross spoke wheels and that rump of rear panel work seems to end so deliciously abruptly that I’m not sure that I can bring myself to drive the bloody thing.

The philosophy here is to be as close to the original as possible, so in exchange for £850,000, GTO builds an exact replica of the original car, and that means 320bhp, 1,050kg and nothing fancy to try and make the car feel more modern. Now, in this company that’s actually a potential downside, because the theme of the others is to add some modern dynamics or fripperies, and at first the SWB does feel a bit flat.

That’s mainly because we’ve come to expect anything with a V12 to wail beyond 8,000rpm, scream through silly valved exhausts and move like a stabbed rat, but this is a brand new old car and it simply isn’t that fast. And it’s up to you, the driver, to adapt to it and then you are in for a real treat.

The driving position is just sensational and the low-back bucket seat lightly pinches your ribs, the gearlever – a great wand of aluminium that sprouts from the transmission tunnel – takes a decent shove and it only really works if you de-clutch accurately on down shifts and make positive moves going up the box. The instruments must be among the most beautiful fitted to any car ever. And why doesn’t Ferrari bring back the key you turn and then push to start the motor? Miles better than some plastic button.

The honesty here is that the GTO Engineering machine offers an authentic Sixties Ferrari driving experience – one that would be comprehensively nixed by a Ford Fiesta ST in just about any situation.

But as we discussed at the top of the show, the progress of outright performance really isn’t of much interest when you’re driving something so soulful and beautiful the outside world seems like the friendliest of places. If you offered me this or an SF90, I don’t need to tell you which I’d choose.

Was the Eagle E-Type the first of the restomods? Henry Pearman has been making Jaguar’s most famous sports car drive far faster than it has any right to for many years now. Only a few cars are finished each year and there will be even fewer of these Low Drags because they take an age to build, and cost, wait for it, £780,000.

Now, if like me you’ve always had this nagging, slightly embarrassing feeling that the Jag E-Type isn’t quite as beautiful as most people believe it to be, and that maybe a few subtle tweaks could improve it, you’re in luck. This thing is so good looking, so shapely and muscular – such a clever mash-up of Sixties cool and modern muscle car, that I think it finally realises the potential of the Brown’s Lane phallus.

And it’s sensational to drive too. The racing world has been squeezing 400bhp from these in-line sixes for years now, but in a lightweight road car the effect is even more dramatic. This isn’t a B-road hustler – it’s a missile you point in the general direction of Cannes and allow the prow to guide itself there on the finest N-roads in France. Because of the way it’s geared third is absolutely devastating, easily a match for the Singer and even in the company of a Colombo V12, this is definitely the best sounding car here.

The cabin is plush, there’s decent air con and even allowing for the slightly icky JLR retro music streamer, Eagle has somehow managed to make this thing feel like it is worth the asking price. As I did in each of these stunning objects, I stepped out of the Eagle, looked back at it and wondered what new-ish car I would rather have for the money. A Porsche 918? Not a chance. 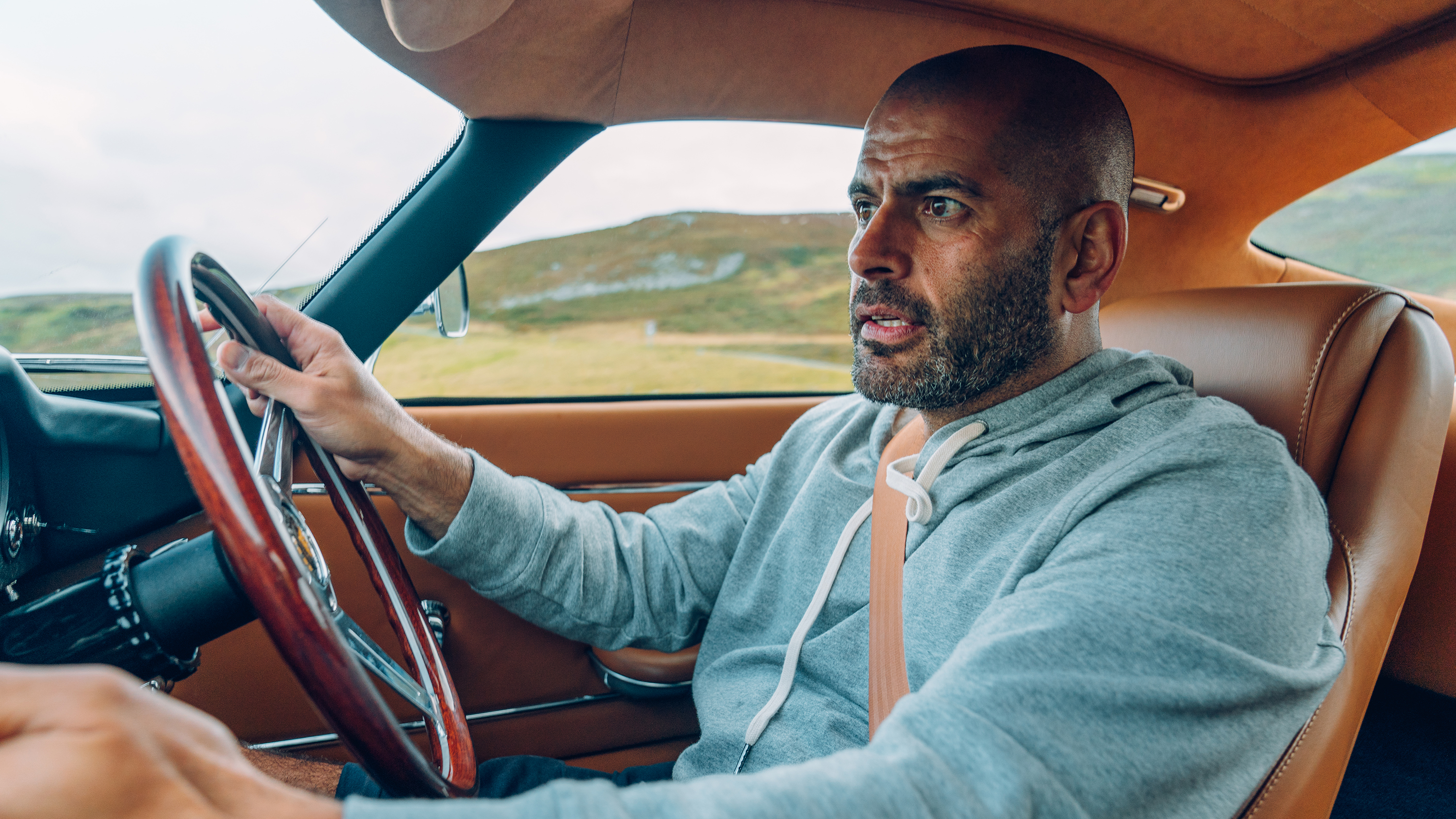 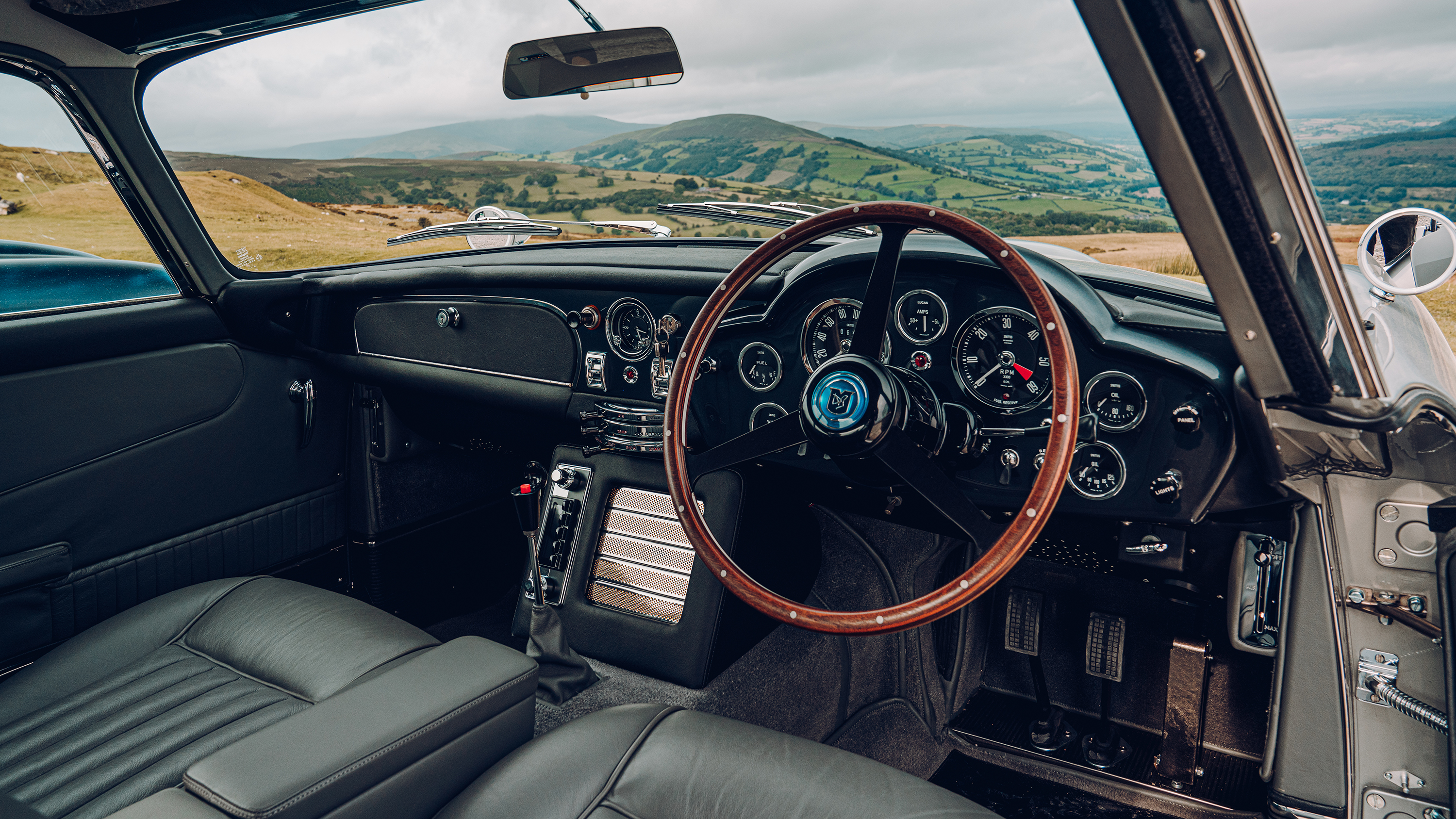 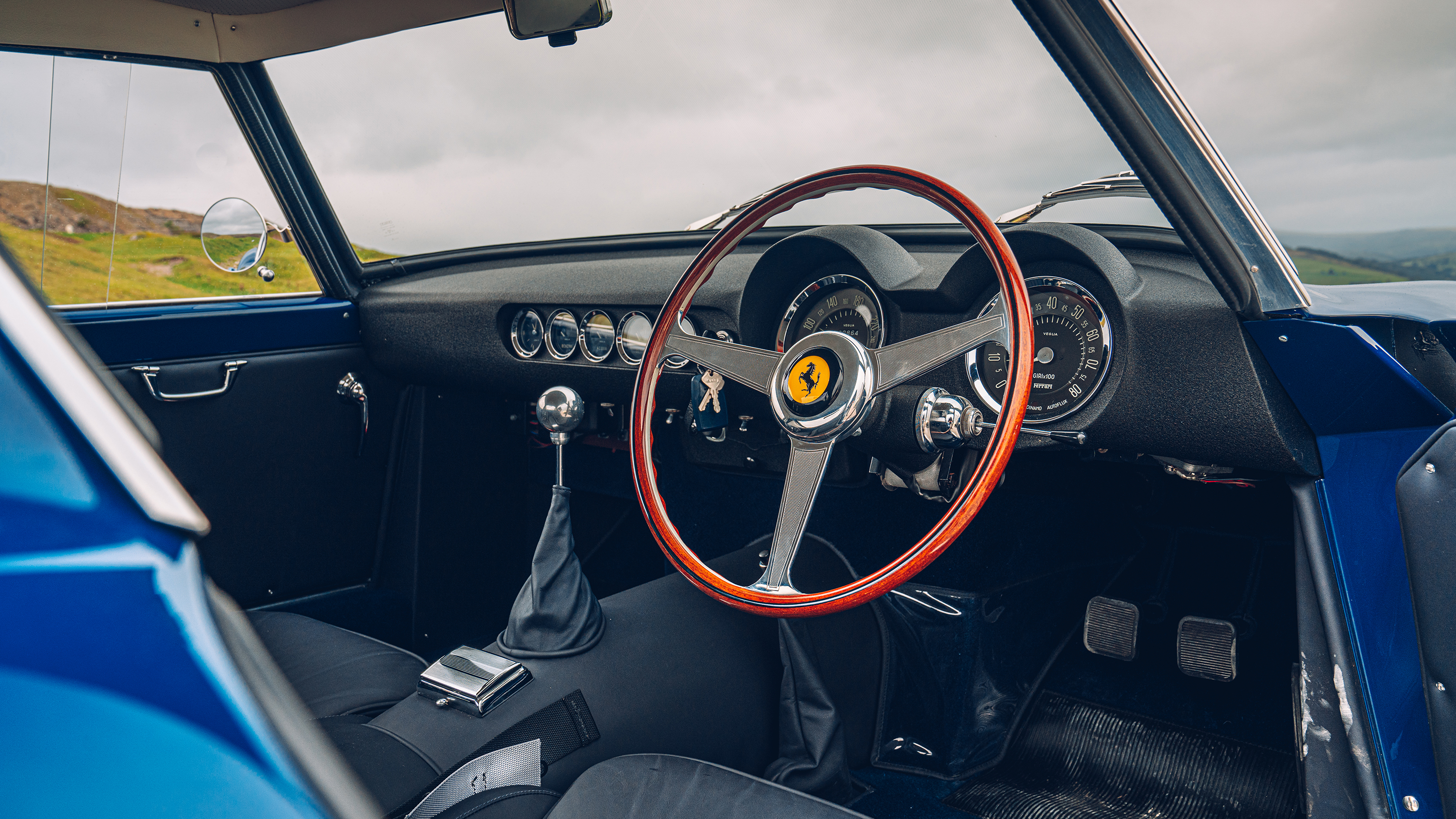 The price of Aston Martin’s homage to the most famous Bond car of them all isn’t easily digestible, even next to a near-million quid E-Type. This car costs £3.3 million and you probably had to buy a few other Astons to get the opportunity to have one. When this was announced, I laughed at the absurdity of the whole project and couldn’t see the point. The moment the man from Aston Martin used the remote special features controller to deploy the smoke screen and then the oil slick function, I realised I might have judged this car a little too hastily.

It is easily the finest waste of money I have ever sat in – the dedication to providing the full 007 experience extends to a sat nav screen that opens like the Sixties radar behind the central speaker grille, has bespoke hardware to look like the original and still function as a nav system! I’m grinning like a child just typing this nonsense.

How does it drive? Who cares – just look at it. OK, I’ll tell you anyway. This is much more in the mould of the Ferrari – a true replica of an original DB5. So it has a 282bhp 4.0-litre straight six, it’s much more GT than outright sports car, you sit weirdly high and the gearlever is no thicker than the stem of a dandelion – and I felt pretty special driving it. Which is kind of the whole point. 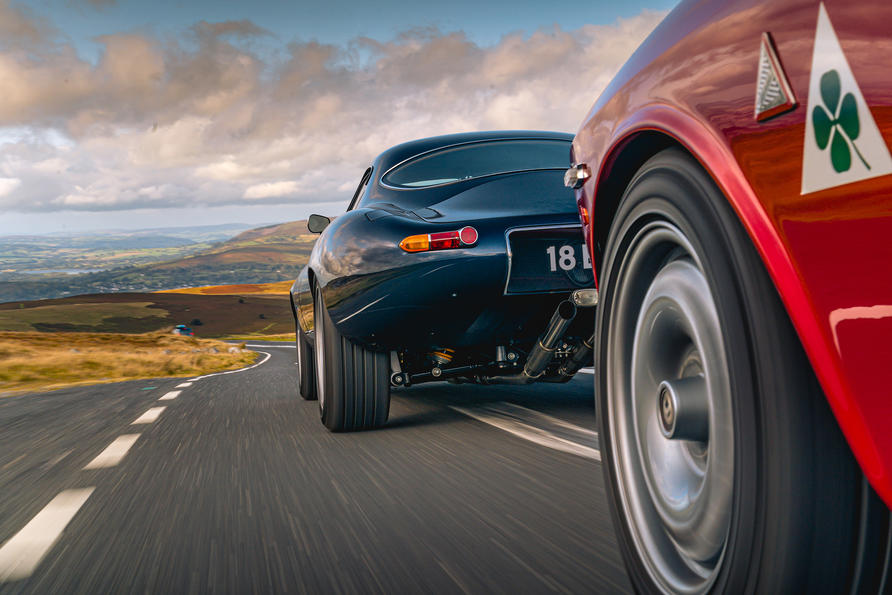 And then to the little Alfaholics car – possibly the greatest giant-killing driving experience of them all. Now if you love step-front Alfas you’ll think this is the most beautiful car ever made, but even non Alfisti will have to concede that it looks sensational. This is less of a cosmetic exercise than the other cars, but it’s still dripping in minimalist details and every material is of the highest quality.

But to drive this car offers something none of the others can, because it is so light and agile. Plus the bodyshell is massively stiff, the suspension has been developed over years of racing and the dampers are of outrageous quality. I haven’t driven many cars that are as fast as this on a dry UK B-road, and I haven’t driven any cars that remain so much fun at much lower speeds.

That 2.3-litre four pot on throttle bodies is a work of some genius. With a perfect driving position and that incredible gearlever, you simply have to ask yourself – would I rather this at £240,000 or a 488 Pista? And you can probably guess the answer. There isn’t a single modern sports car, save perhaps a GT3 Touring, that comes close to matching what these cars offer. Don’t even begin to ask which is the winner – they’re all sublime.