When Christian von Koenigsegg builds a 50th birthday present to himself, you can rest assured it’s not going to be half baked...

Me wandering around Koenigsegg HQ in Angelholm is how Augustus Gloop must have felt waddling into that chocolate factory. It’s difficult to process that such a cave of wonders really exists, or whether my plane came down somewhere over the North Sea and I am, in fact, strolling around my own personal heaven. Smiley Swedish people whistle and wave as they hand polish the most exquisite carbon components, abuse a V8 on the dyno, or stitch the Koenigsegg crest into a slab of thick, expensive looking leather. Regeras to the left of me, Jeskos to the right, here I am stuck in the middle of a hypercar fever dream trying to remain vaguely professional.

Here comes Willy Wonka, a hard hat balanced on his dome, high-vis vest hung around his broad shoulders and a giant hand outstretched to greet me. Drills fizz, pipes clank, forklift trucks zigzag back and forth – we’re in the new wing of Christian von Koenigsegg’s Neverland, acres of polished concrete, steel pillars and glass that will eventually house a new production line for the Gemera (CvK’s typically low-key take on a practical four-seater – an electrically enhanced 2.0 three-cylinder engine (nicknamed tiny friendly giant, but known in some corners of the factory as tiny b*****d), 1,700bhp, £1.6m), but that’s not what we’re here to see.

At The Quail, an event during Monterey Car Week back in August, Koenigsegg caught us off guard when it revealed a retro-homage to its first ever production car, the CC8S, delivered to customers 20 years ago. This new £3.3m CC850 has the same sparse design, but is bigger, sits on shared underpinnings with its latest hypercar, the Jesko, and by some considerable wizardry turns the nine-speed auto into a ‘simulated’ six-speed manual. I too donned a yellow hat and orange vest for a tour of the deeply fascinating CC850 from the only man who knows every nut and bolt intimately... 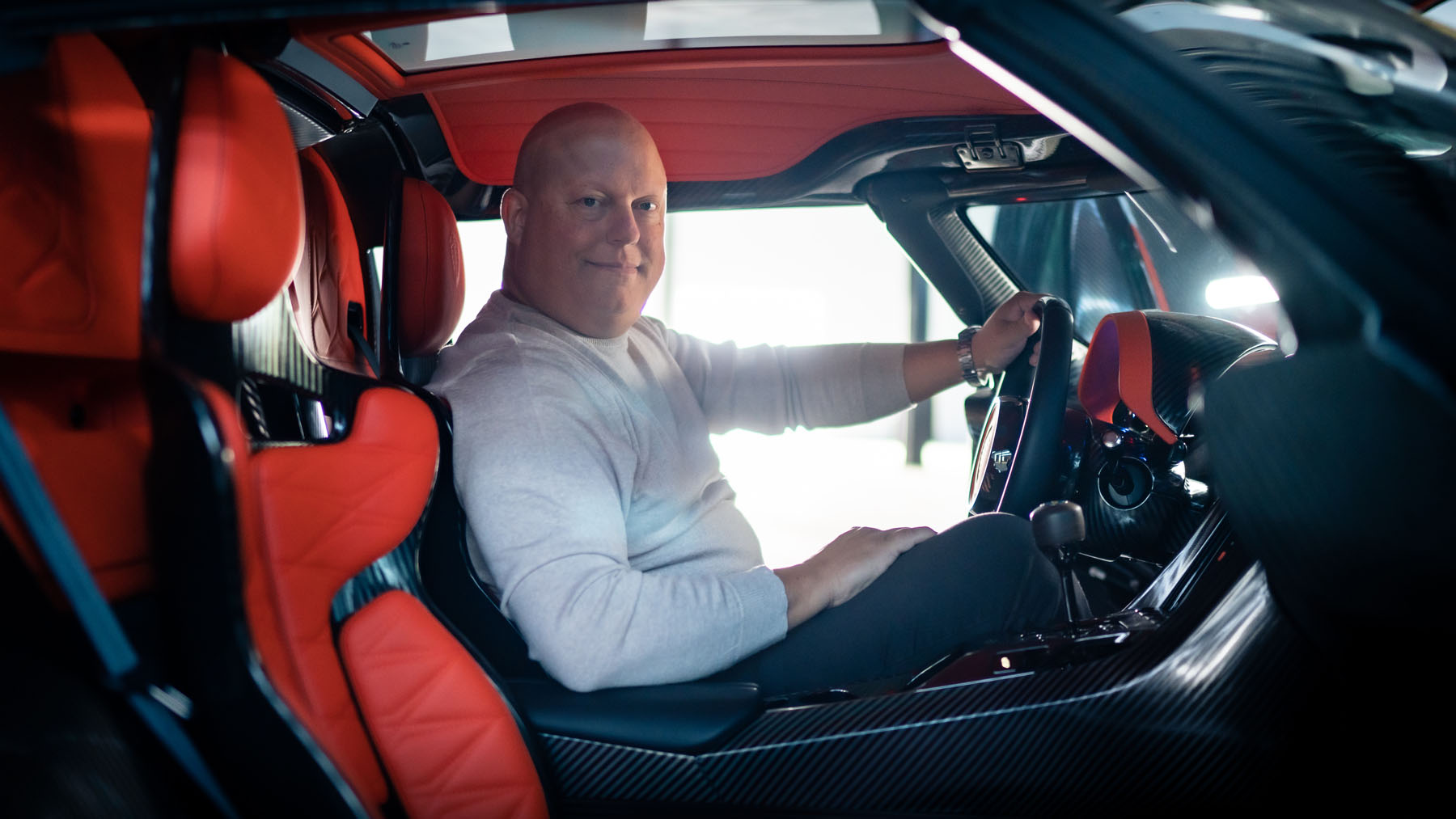 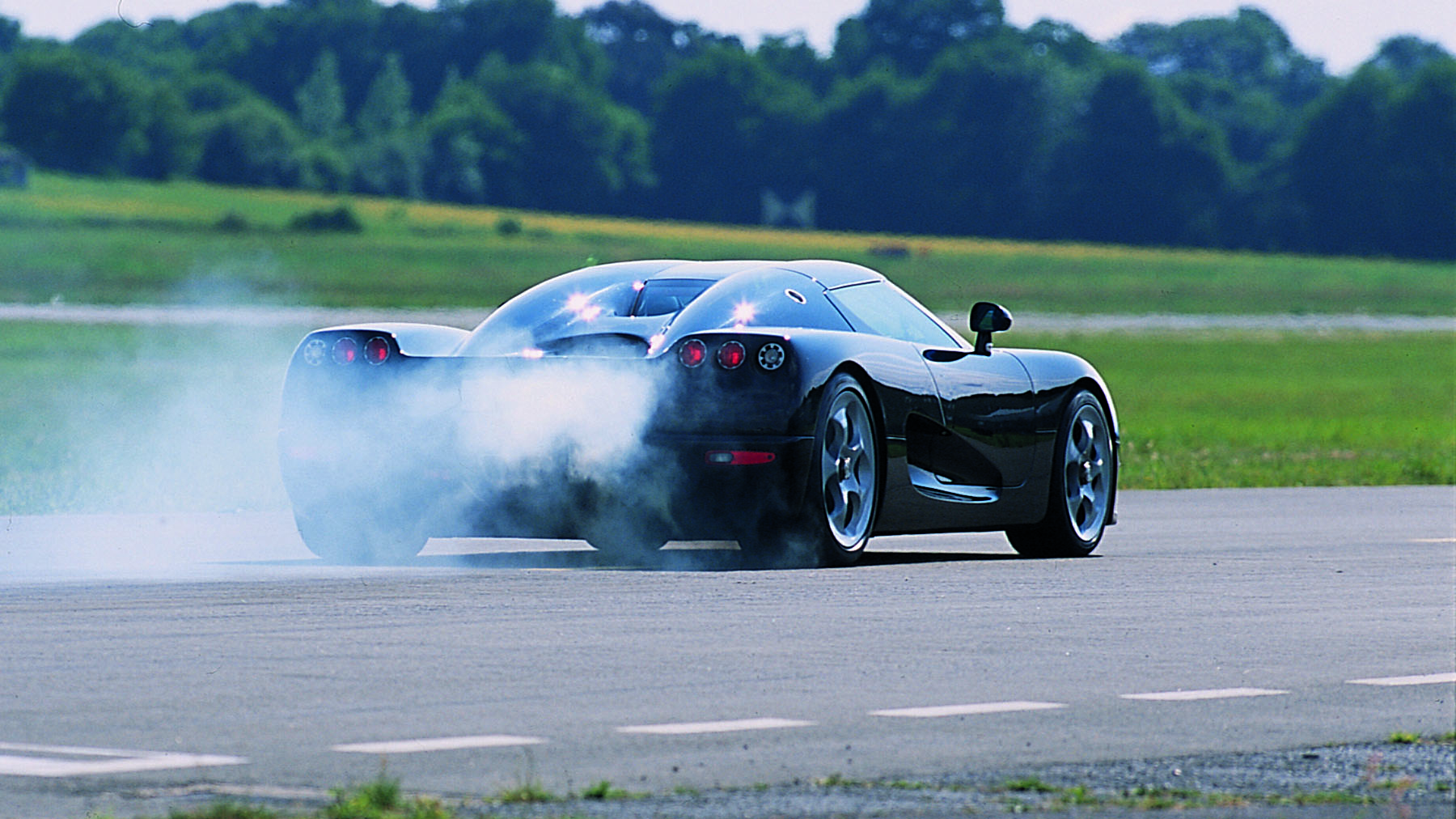 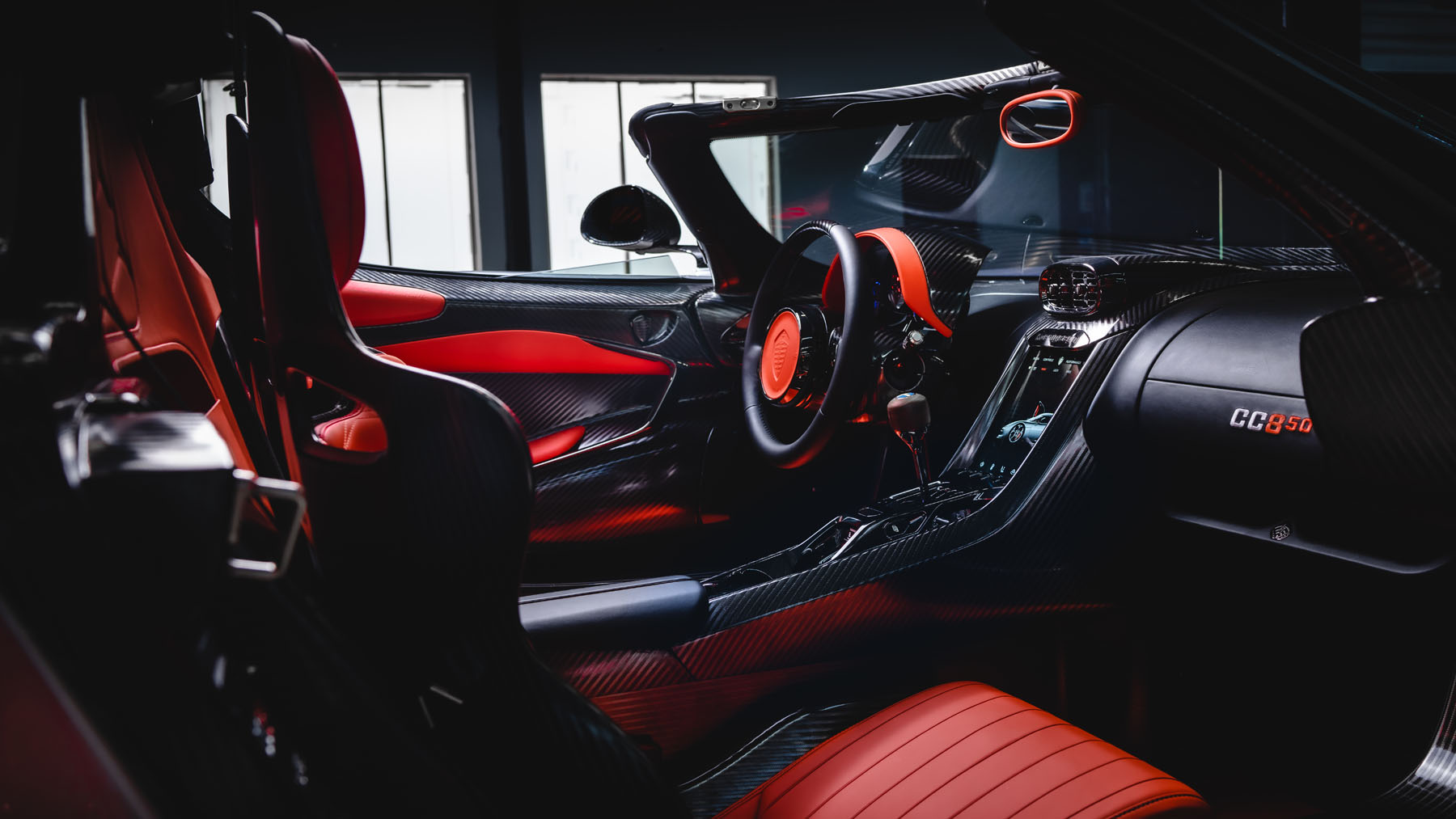 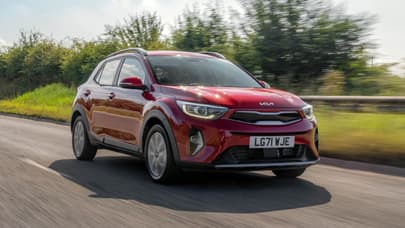 TopGear: Christian, we need to stop buying our clothes in the same place.

Christian von Koenigsegg: Ha, unfortunately it’s still a building site and Sweden is pretty strict on rules, so we can’t just roam around here freely until they hand over the keys to the new factory.

TG: Give us the elevator pitch on the CC850.

CvK: This is a homage to our beginnings. It’s very naked, simplistic, the original idea of a Scandinavian supercar. We felt it was a good opportunity to imprint the origins of Koenigsegg one more time, but take it into the future with modern technology and improved ergonomics... and the response has been staggering.

TG: And the name?

CvK: The first car we ever produced and delivered to a customer in 2002 was a CC8S – competition coupe, eight-cylinder, supercharged – it took the Guinness World Record for the most powerful homologated production car in the world with 655bhp. Now that’s bread and butter. We said, let’s celebrate that car and make 50 of them and as there’s no supercharger in this one, there’s a twin-turbo V8, we’ll call it the CC850. I also turned 50 this year, so it made sense. However, the interest was enormous, which annoyed some loyal Koenigsegg customers. Within two days we came up with a twist – 50 for my 50th birthday and then another 20 for 20 years of production, so we’re actually building 70 of them. And still there was a long queue of people who couldn’t get in.

Customers tend to go wild on specification which slows things down

TG: It’s a bigger car than the CC8S – longer wheelbase, a bit taller, bigger wheels – and with Jesko underpinnings, but the surfaces and proportions are quite similar. Did that cause any aero problems? The CC8S was famously light on downforce, just ask The Stig...

CvK: Here we have a proper front splitter, we let air out from the front arches at a lower point, we have vents in the bonnet that wrap around the luggage space, so we can still fit the roof in. We have a top mounted fully active rear wing, which we pioneered on the Regera, we have a much bigger diffuser and loads more tweaks and details everywhere.

TG: Is the engine the exact same 5.1-litre twin-turbo V8 as the Jesko?

CvK: It’s got slightly smaller turbos so a little less boost, a little bit less inertia, but better responses... not that the Jesko has any noticeable lag, but with a manual you don’t want any of it. You want to have it feeling like a normally aspirated car. As a result it’s got less power than the Jesko, it’s one megawatt, 1,366bhp running on E85, and the kerbweight is roughly the same number so it’s a one to one power-to-weight ratio. On normal petrol, it’s a little over 1,200bhp.

TG: It feels like more of a street car than the Jesko, was that the aim?

CvK: It’s got this active suspension in ride height, bump and rebound, so when you set it up for track, it’s still pretty firm, but then you can have a really comfortable ride on the road. I think the Jesko Attack’s suspension is three times stiffer with all that downforce. But the CC850 is still a lot of fun on track and of course with less aggressive tyres and more body movement it’s very driftable, there’s no ragged edge to it, it’s just very, very friendly.

TG: Please tell me you’re keeping one of these for yourself...

CvK: Well, this is mine. It’s the first show car, it’s the first one we built, it will need to be upgraded through the development programme. But this is the one I’m going to keep.

TG: As birthday presents go, it beats socks. Let’s take a seat inside it shall we and talk about this analogue twist on your Light Speed Transmission...

CvK: This is the gearbox we introduced on the Jesko, so it’s our complete retake on a rapid paddleshift box, where we managed to remove a load of components by compounding gears. It’s like a derailleur mechanism on a bike, where you take one gear times another and get a total. So really it’s three times three gears creating nine ratios, instead of having nine actual gears. That means it’s the weight and size of a six-speed gearbox.

TG: Go on, my head hasn’t exploded quite yet.

TG: How do you come up with this stuff? Did the idea start as “how do I get rid of the flywheel?”

CvK: It started with “how do we get more gears with less components and less weight?” No flywheel was a bit of an experiment. We started simulating, the engine was fine from a harmonics perspective and the drivability was super exciting because the throttle response is just electric. We actually have to use software to ‘catch it’ electronically to make sure it doesn’t go too wild.

This is a homage to our beginnings. It’s the original idea of a Scandinavian supercar

TG: It sounds very angry. Back to the gearbox then, how do you go about turning it into... is it fair to say, a simulated manual?

CvK: Well, it’s not unfair, but a lot goes into it to make it act like a directly connected clutch and shifter. For example, when you’re driving, you can’t just put the gears in without dipping the clutch, there is a detent. Or if you’re coming from too high a gear, it won’t allow you to push in until there is a closer rev match. When you’re in gear, you can only pull it out without the clutch if you are not under load, and if you push the clutch really fast, there is more resistance just as you would have with hydraulic lines.

So, yes, it’s augmented, but it’s augmented in a way that all the aspects of manual gearbox are considered. Think of a throttle, normally in old cars they had a wire or a cable but for the last 20 years it’s been electronic. And the clutch pedal normally has a mechanical rod or on modern cars, a hydraulic line. The same thing that’s happened with a throttle, we’ve done with a clutch. You can stall it, you can slip it, there is no difference in sensation.

The other benefit is we can have varying gear ratios depending on what mode you’re in – we have six manual slots, but nine ratio options – so for example in track mode, first gear is a taller gear than on road so you don’t cook your clutch driving out of the pits. And when you’re on the highway or in traffic, you slot the lever over here and you have a nine-speed auto.

TG: Is there a safety net built in to stop anyone unaccustomed to driving ‘stick’ destroying the gearbox completely?

CvK: All our cars are OTA upgradable, so we’re starting out with this very analogue non-intervention manual system. But we could, over time, introduce a ‘beginner’ manual mode where if you go wrong, we smooth it out, or we can rev blip on downshifts. We can just add features over the air.

TG: Is it actually working already?

CvK: It’s around 80 per cent complete. We’re still doing some tweaks, some sensor improvements. We’re already driving around with it, it’s already fun, but we’re not going to deliver these cars for another year or so, so we have time to perfect it.

TG: This new factory then, how many cars can it churn out a year?

CvK: This is mainly the Gemera production plant, which is the highest volume car we have ever taken on. This facility is capable of producing one car a day, but it won’t be a car a day for some years. There’s bringing the supplier network up to speed, we have to make all the carbon fibre parts, customers tend to go wild on specification which slows things down, but we’ll get there. I think around 100 cars in the first year is possible.

CvK: Correct. It’s like a normal car company doing 100,000 cars suddenly cranking it up to 300,000. With us everything is handmade and bespoke so that’s the challenge. We’re also filling this building with a specification lounge, a museum, an events space and a new design studio.

TG: So 28 years ago you started this company, 20 years ago you produced the CC8S, now this is all yours. Did you ever think you would take it this far?

CvK: Of course I couldn’t foresee exactly this, but I never limited my thinking to what it could be. I knew I was going up against giants. I knew it wasn’t going to be easy. I thought I’ll build one car, hopefully someone likes that. I’ll build another one, hopefully someone likes that, and who knows where that will go. That was the plan then and now. I’ll just keep on going and see where it takes me. 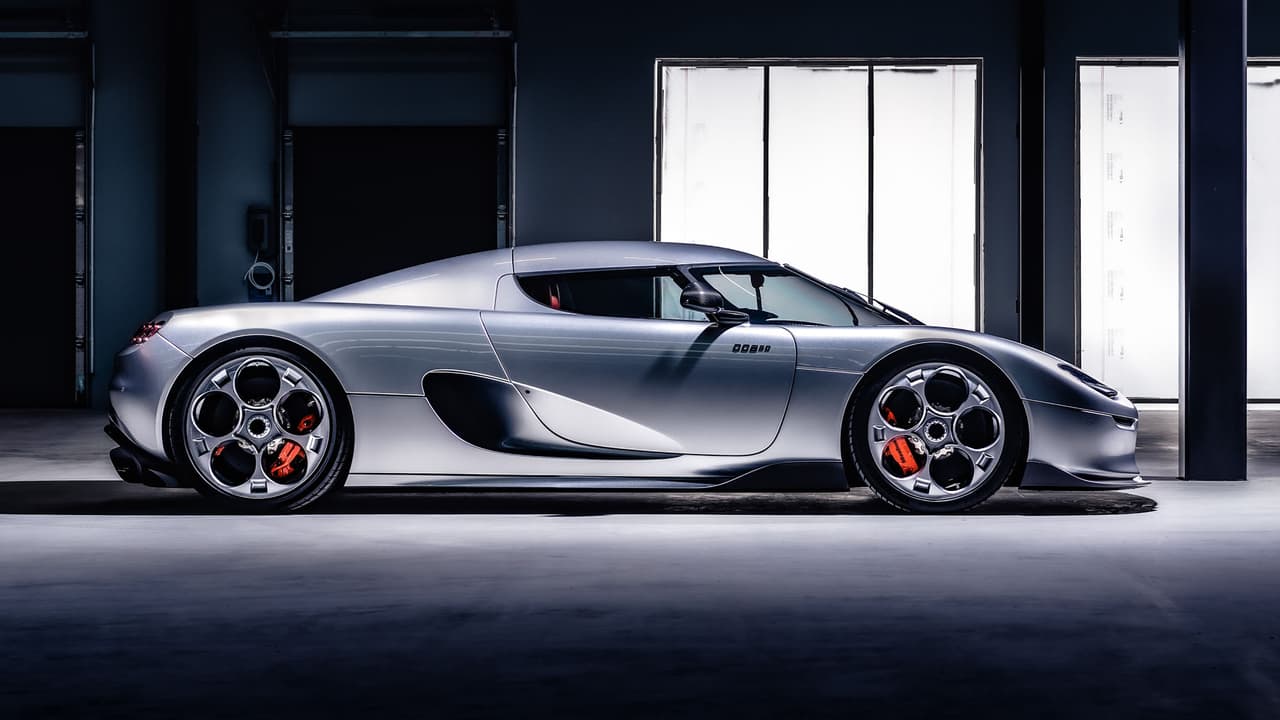