Driving the most remarkable road in the world: the Ho Chi Minh Trail

The Vietnam War wasn’t won with firepower, it was down to one extraordinary road

Two in the morning. Dead of night.

The mission, should I choose to accept it, is to relieve myself behind the nearest bush. Stopping me is a profoundly sweaty back welded to my tent, a perilous ladder descent in flip-flops, blackout darkness, the thought of a thousand flying assassins waiting to feast on my clammy love handles and several pools of stagnant water filled with leaches keen to gnaw my feet to bloody stumps. And either a local is enjoying a vigorous scrub in the river, or a water buffalo is about to trample me for good measure. I decide against it and reach for a bottle.

Trivial my camping problems may be, but to fully appreciate the Ho Chi Minh Trail, the main supply route from North to South Vietnam established in 1959 and regarded as one of the great military achievements of the 20th century, I need to fully understand the people that built, maintained and used it. What conditions did they face? What motivated them? How on earth did the Viet Cong (VC) and North Vietnamese Army keep the supplies flowing and their ranks fed, armed and replenished in the face of an American aerial bombing campaign that made its WWII efforts look like a village green bonfire night? To do this, I need a lightly modified 3008 and a 60-year-old Peugeot bicycle. Time for a history lesson. 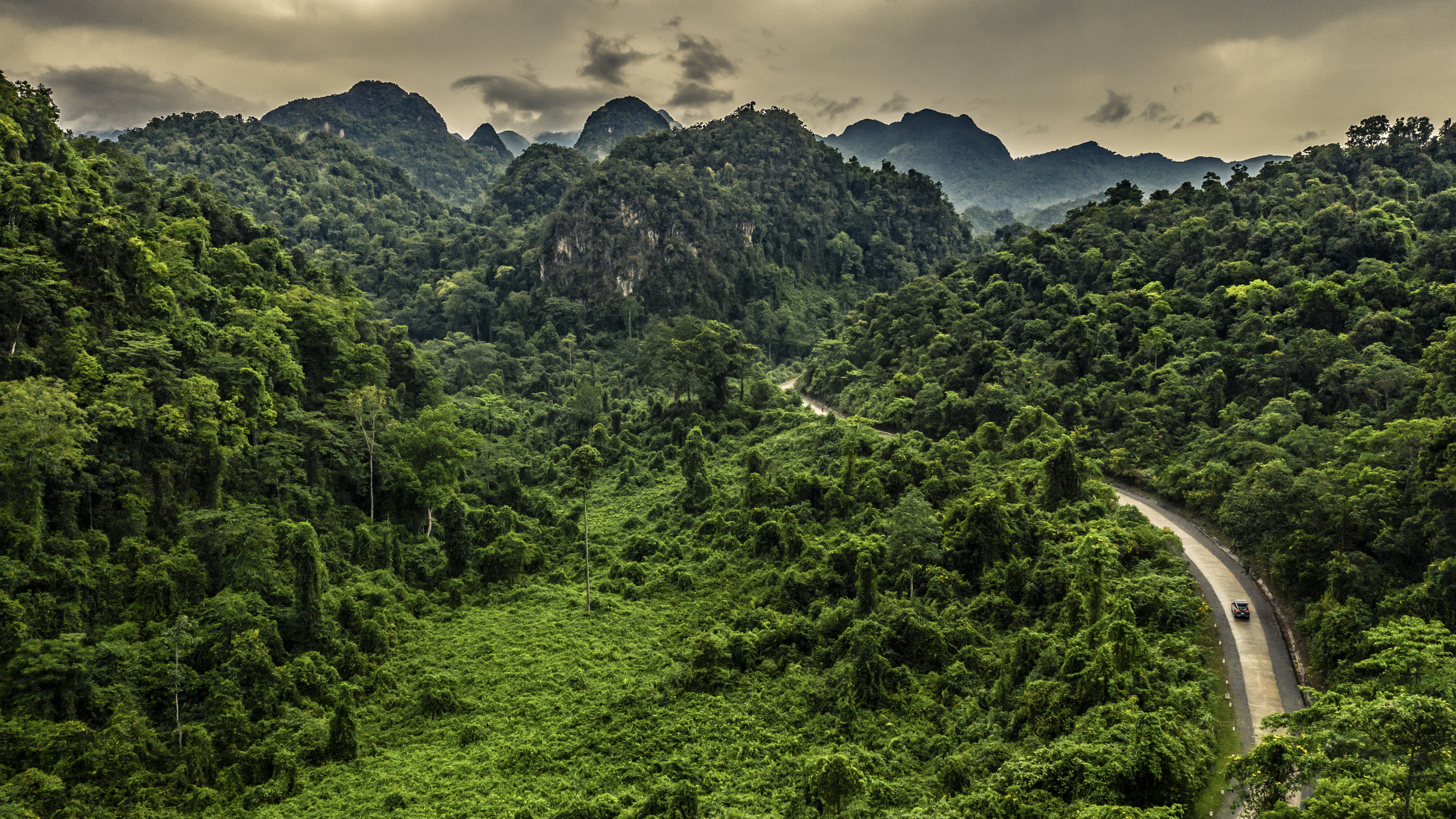 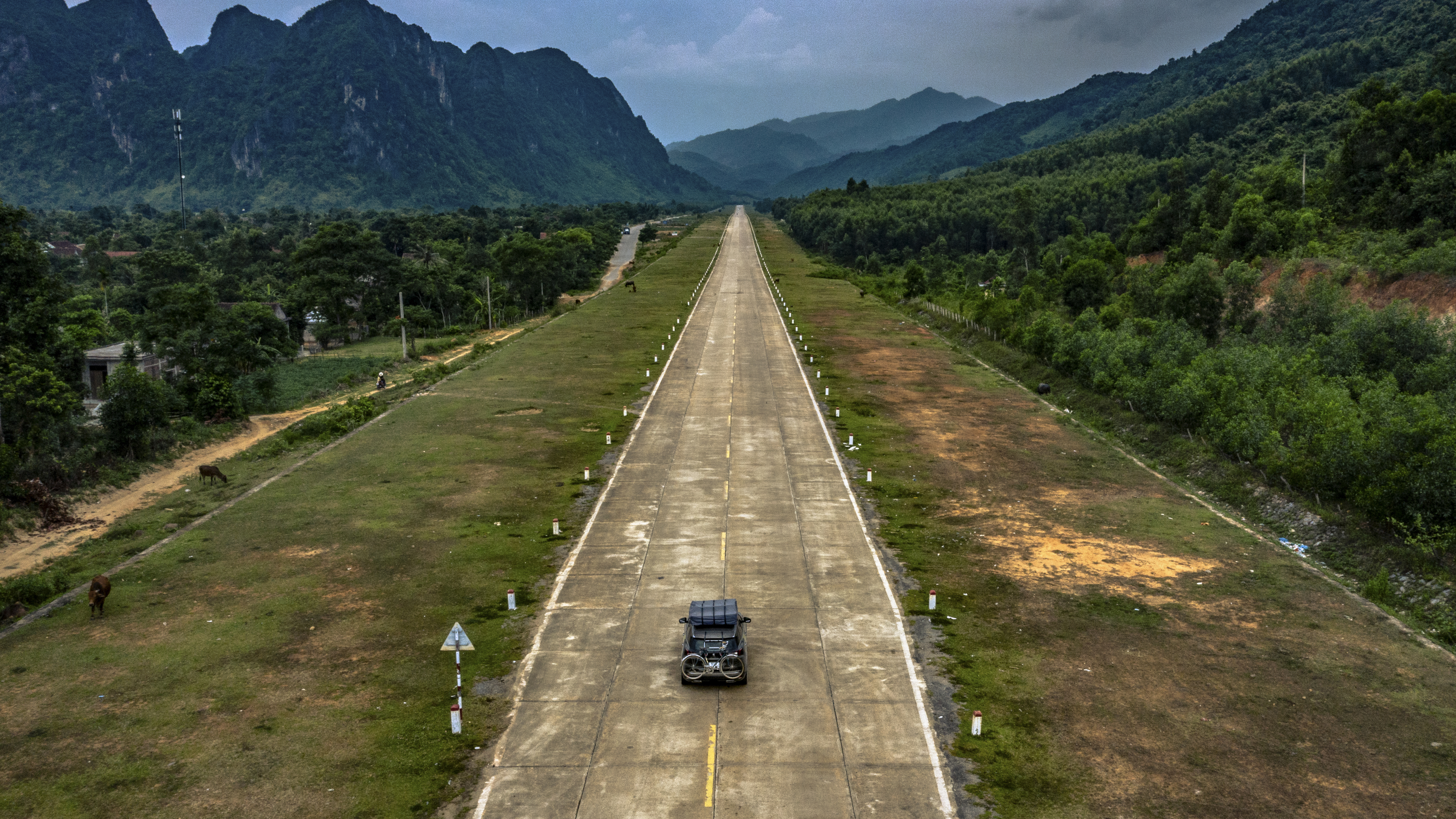 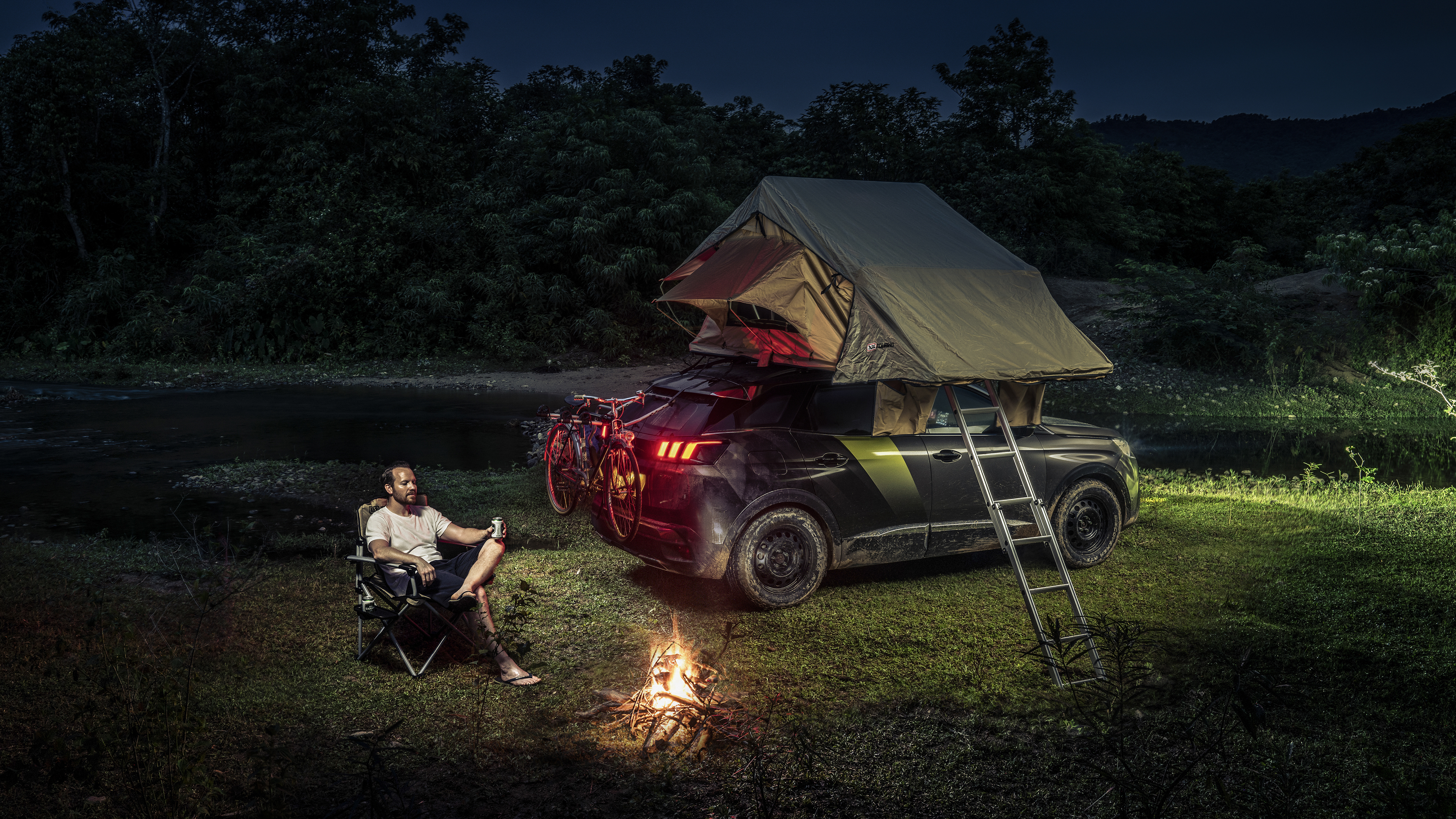 The reason the occupying French army was finally booted out in the Fifties, and the US could never win the Vietnam War that followed, was they were both fighting on away turf. Stubborn, sledgehammer tactics were doomed in the face of an enemy motivated by freedom and independence, who knew how to operate in extreme heat and humidity, and to move silently and swiftly through the jungle. Masters of camouflage and guerrilla warfare versus hi-tech military machines confident they could bomb their adversaries back to the Stone Age.

Take the battle of Dien Bien Phu in ’53. The French, tired and depleted by the Vietnamese insurrection decided to draw them into a final, decisive clash at a remote crossroads and a key Vietnamese supply route from China. The French dropped 19,000 soldiers, certain the Vietnamese couldn’t move sufficient men, supplies and artillery to somewhere that isolated. The Vietnamese simply loaded up specially modified bicycles – 60,000 of them – with guns, bits of heavy artillery, food, ammunition and pushed them along tracks carved into the jungle floor to encircle the French with 50,000 troops, pound them into submission and vanquish them for good.

Those pack bikes or xe tho were specially modified Peugeots sold to them, in a poetic twist of fate, by their French overlords. Handlebars were reinforced, seats were removed and replaced with bamboo racks, the forks, wheels and frame beefed up, and a bamboo stick attached to the handlebars to steer the thing. Thusly equipped a ‘steel horse’ could shoulder up to 300kg, and cover around 25 miles a day, mostly at night, camouflaged with leaves and branches. Between 1955 and 1973, the period when the US decided to support the South Vietnamese government in squashing the communists in the North, the bicycle once again had a crucial role to play. 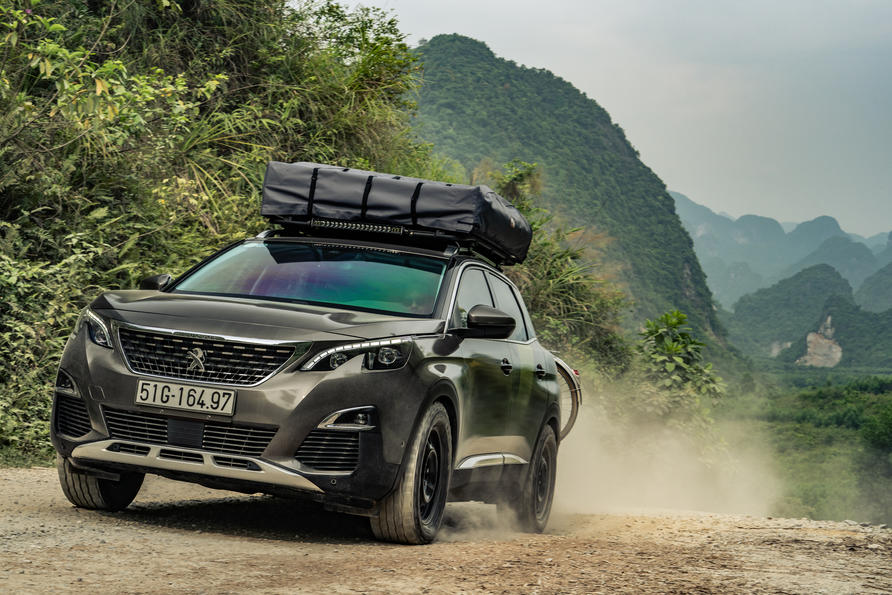 By the mid Sixties, thousands of North Vietnamese were assigned to maintaining and expanding the trail, as well as reinforcing bridges to allow trucks – which were faster and more efficient than the bikes, but couldn’t be hidden by the jungle canopy as effectively – to carry the bulk of supplies and soldiers south. If the US B-52s or helicopters spotted one and blew a crater in the trail, it was often rerouted within a matter of hours, or the truck’s cargo unloaded onto bikes and porters to keep the provisions moving. As one American pilot put it, bombing the Ho Chi Minh Trail to a standstill was like trying to put socks on an octopus, because it wasn’t just one road, but a living, breathing, ever-evolving network of tracks and trails that, stuck end-to-end, stretched over 12,000 miles and criss-crossed over into neighbouring countries Cambodia and Laos – neutral territory, so off-limits for US ground troops.

Our truck is the decidedly un-military grade, front-wheel-drive Peugeot 3008, but with some choice modifications to make our exploration of the trail possible. Cooper Discoverer AT3 tyres toughen the stance and make the most of what traction there is, an LED bar allows us to be seen from space and attract every angry bug within a square mile, while the roof tent… is a roof tent, and the stripes aren’t strictly necessary. The bike on the back is 100 per cent original, and a thing of beauty – a perfect example of a pre-conversion pack bike. I’m told by the seller the dynamo-powered front headlamp would have been used to illuminate ad hoc surgeries on the battlefield.

In the last 15 years, a Ho Chi Minh Highway has been pieced together by paving over old sections of the trail, giving an uninterrupted, 1,000-mile straight road from Hanoi to Saigon without leaving Vietnam, or the safety of Tarmac. Too monotonous for us, so we’re concentrating on a section just inland from Dong Hoi in the north central area of Vietnam, where the country sucks in its stomach between Laos and the South China Sea. Just north of what was the demilitarised zone (DMZ), it’s home to the Phong Nha Ke Bang national park and packed with every terrain possible: lush jungle, deep ravines, muddy trails, postcard paddy fields and villages, paved highways and secret landing strips all huddled together in a cluster of breathtaking beauty that lifts the Vietnam War from the pages of books and renders it into a sobering reality. 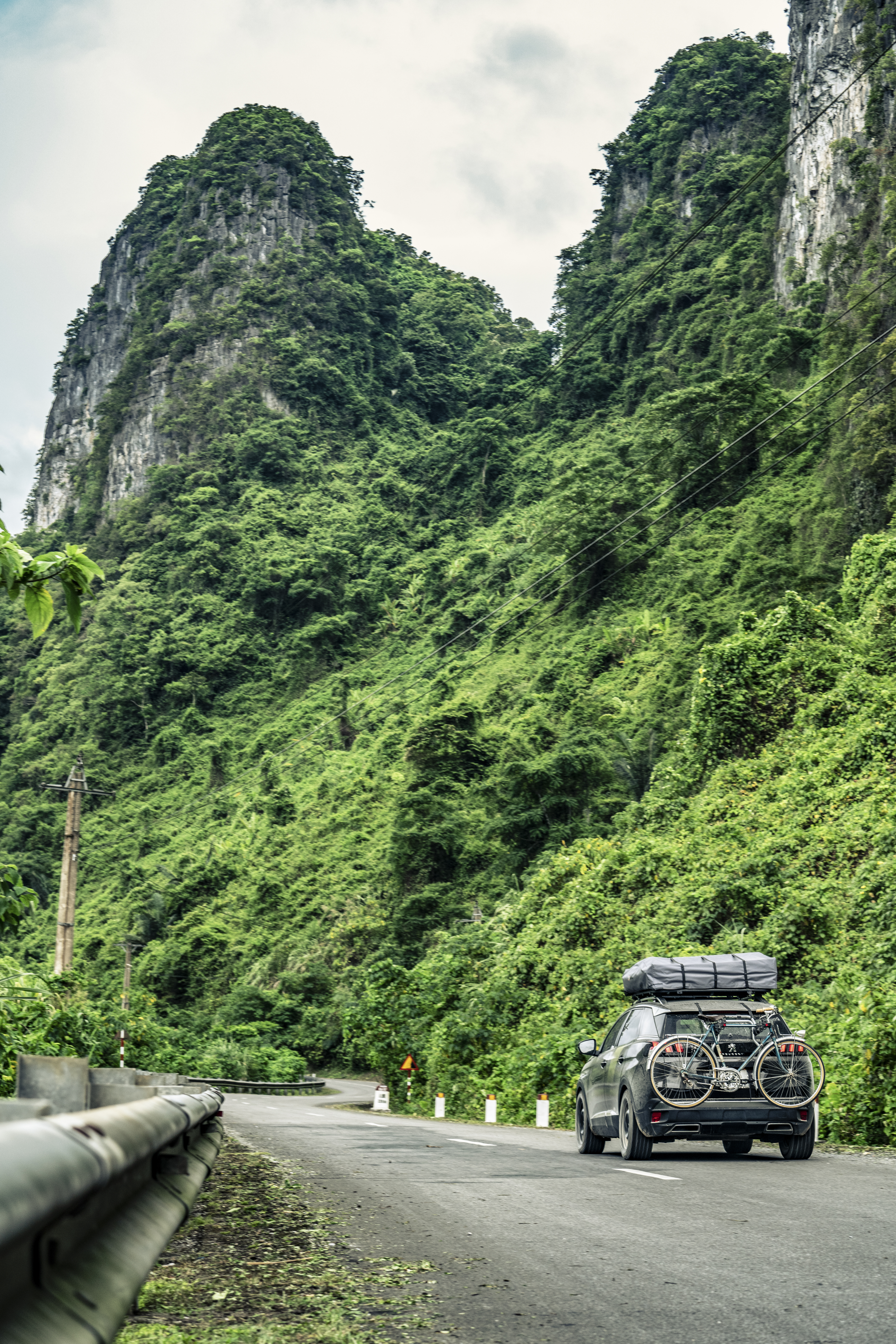 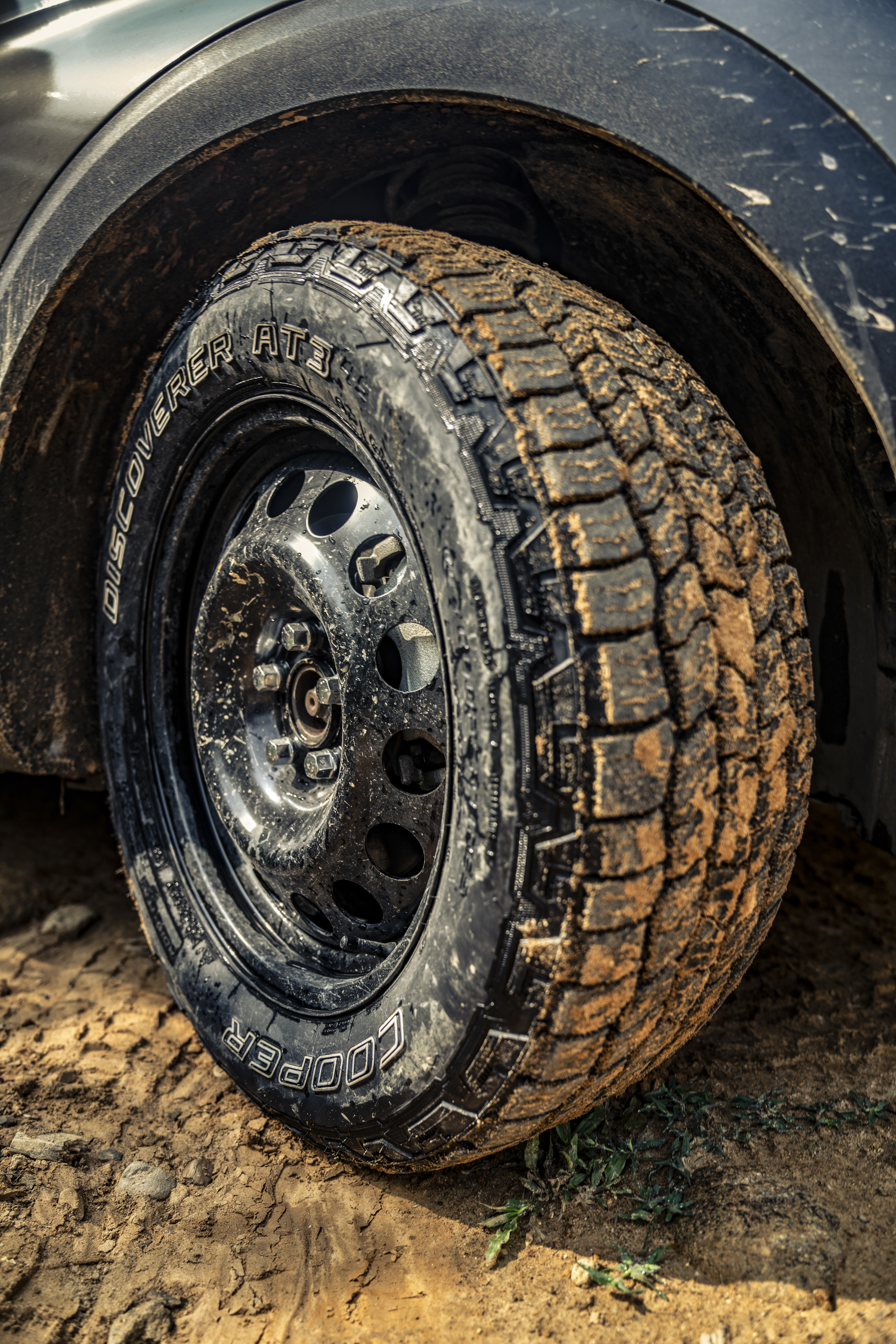 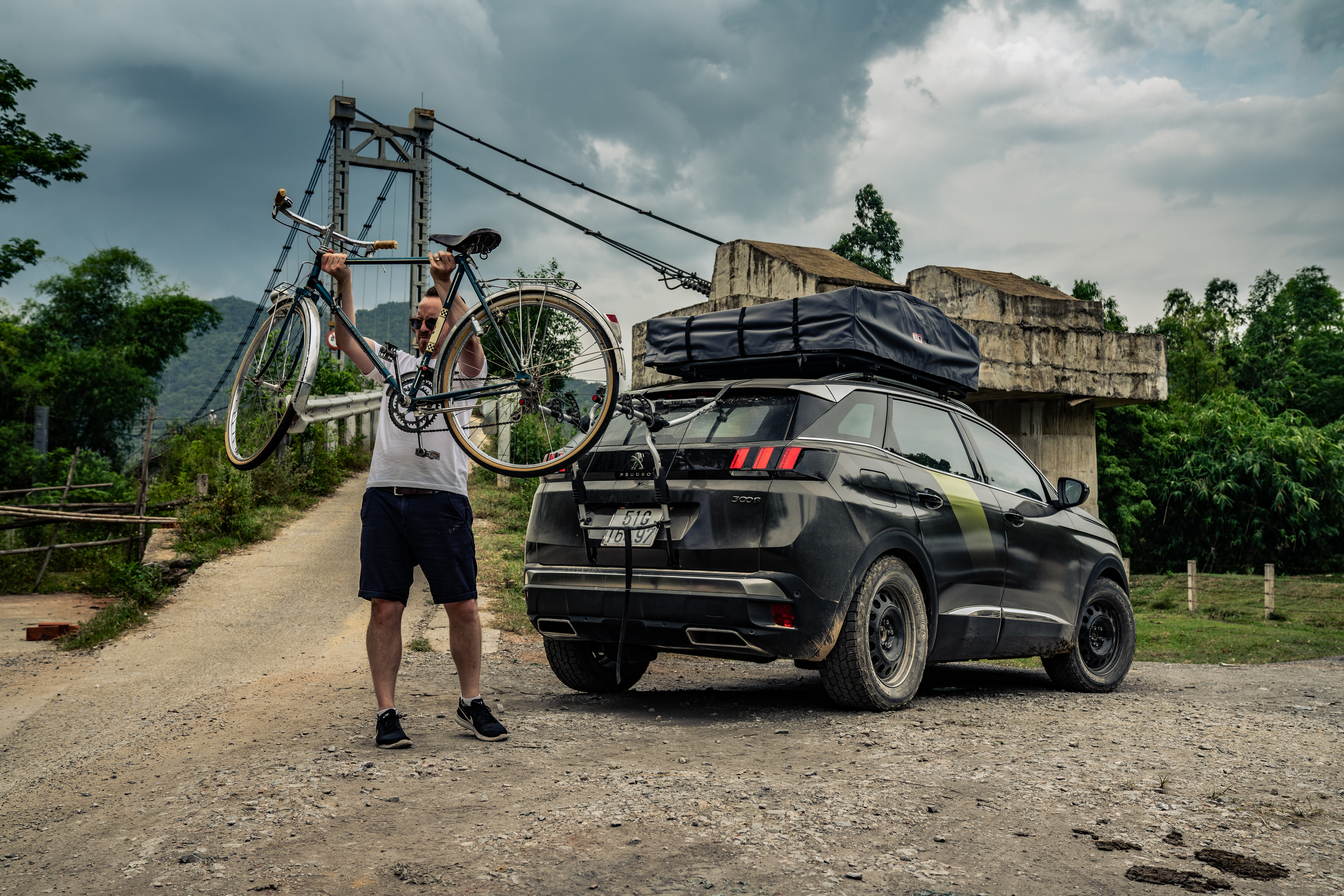 Driving west on a section of the Ho Chi Minh Highway, we soar through the jungle, surrounded by trees and foliage so lush and densely packed it’s incredible the VC could hack a route through it. And yet most of the growth is just 40 years old, since swathes were levelled by millions of tonnes of US bombs and chemicals, like the abhorrent Agent Orange, designed to peel back the plant life and blow the Viet Cong’s cover.

Suddenly the road in front of us snaps straight, flattens and widens at Khe Gat – part of the highway now, but once a secret landing strip. In 1972, the North Vietnamese heard American warships were planning on shelling coastal targets around Dong Hoi, so they started disassembling diggers in Hanoi and trucking them under cover to Khe Gat to construct a secret runway, building just a small section at a time then covering that with leaves and branches to avoid American eyes in the sky. As soon as completed, the branches were swept away and two Soviet MiG-17s were at the coast seven minutes later – too fast for the Americans to react – raining bombs on the US warships – the first air-raid on the US Navy since WWII.

We head off-road, following the banks of the Song Con river to reach our camping spot before dark, the 3008, Grip Control set to mud and ruts, surprisingly at home on the gnarlier trails and deeper crossings. But it’s painfully slow going, a reminder of how laborious all but the best-surfaced bits of the trail would have been for the loaded-up trucks and bikes. Out here in the wilder parts, though – feeling the sweat pouring off me, craning my neck to take in the endless peaks and troughs rippling the countryside, away from the safety net of civilisation – my thoughts turn to the American GIs. Most plucked from the poorest neighbourhoods, dying out here in their thousands as they tried to adapt to this alien landscape, trying to target a mostly invisible enemy and reconciling their duty as a soldier without fully knowing what they were trying to achieve. 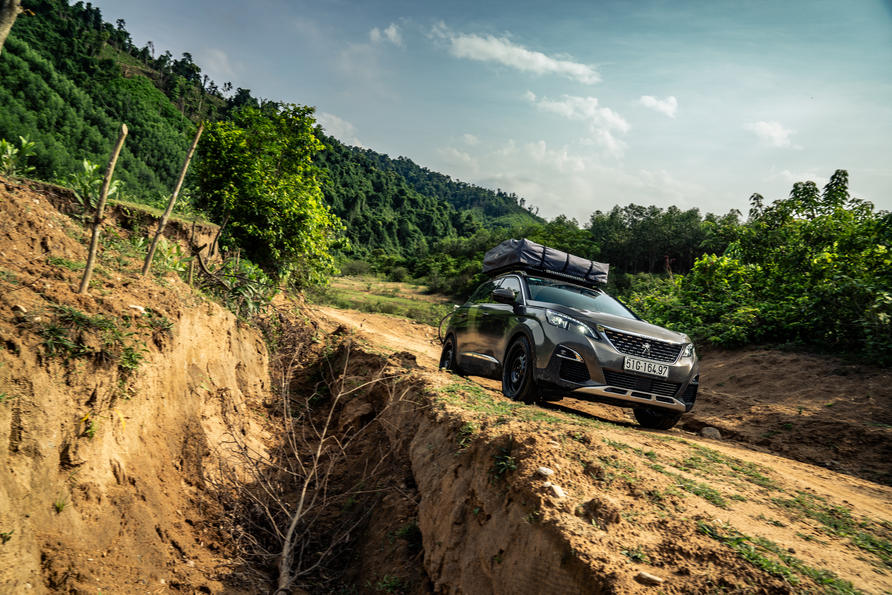 Not all bravery was on the front line, though. The thousands of North Vietnamese, many women and children too young to pick up a gun, were tasked with running repairs to the trail and weren’t just at risk from bombs falling on them... disease, snake bites, wild-animal attacks and exhaustion all claimed their share – enough to fill 71 cemeteries along the route. Keen to avoid joining them, I park the car and cycle gingerly across a suspension bridge swaying gently in the breeze, past a bomb crater still hole-punched into the earth and through the undergrowth, until I arrive at a cave used to brew rice wine during the war, now a convenient meeting place with Phan Xuan Tham, a Viet Cong veteran.

Born in 1956, he was too young to fight for most of the war, but protected the local area once he came of age and worked on repairing the trail when he was younger. He shakes my hand warmly, smiles – all teeth and wrinkles – and tells me: “The Ho Chi Minh Trail sometimes reminds me of the war, but it doesn’t fill me with fear, I’m proud of it. It was my duty as a Vietnamese to help build the road and unite my country.” There’s a placidity to him I didn’t expect when he recalls the war, no signs of anger or grudges towards the West.

I question some other, younger Vietnamese about it and get the same reaction, the bad blood has simply evaporated. “We just want to move on, forgive, it’s in the past. We just want to have a peaceful life.” It’s taken one incredible road, one hell of a journey, but Vietnam’s future has never looked brighter. It’s like Uncle Ho said: “Nothing is more precious than independence and freedom.” 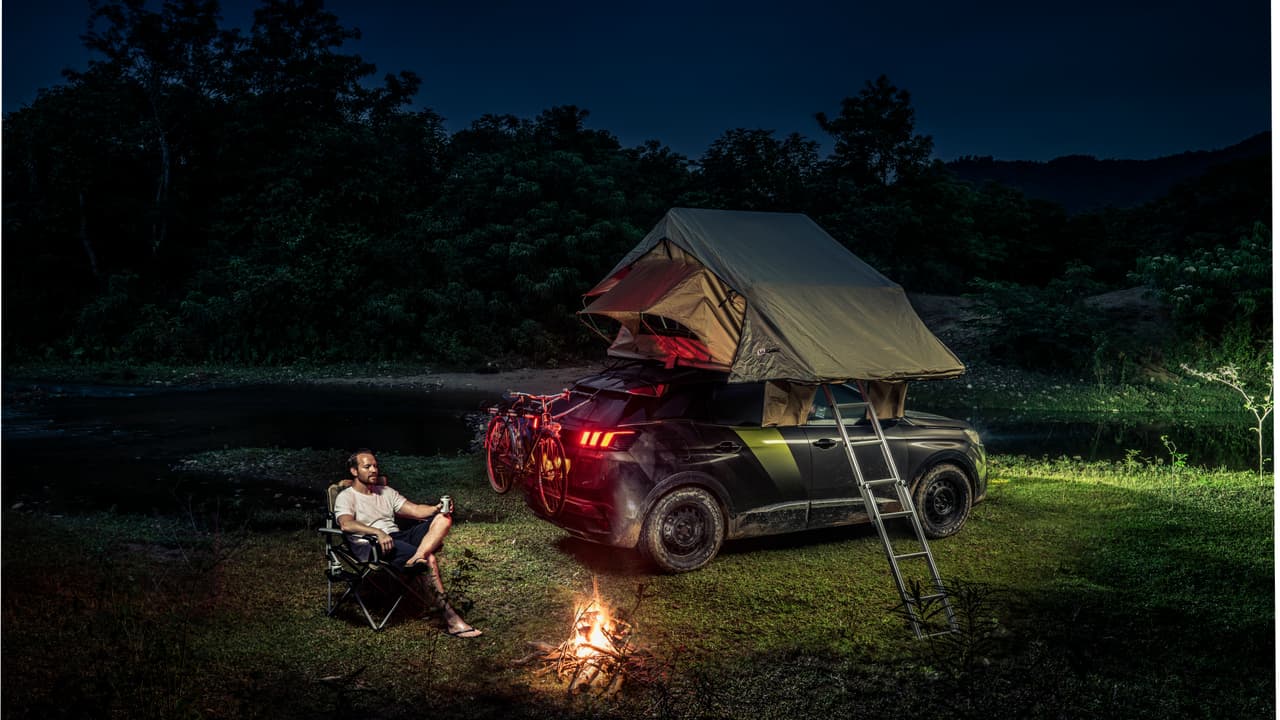