Lamborghini's back in the SUV game. Here's where it all began

Seemingly styled with nothing more than a set square and blunt pencil over a particularly carbtastic Italian lunch, the Lamborghini LM002 is, for all intents and purposes, genesis for the performance SUV sector.

It may have taken the likes of Audi, Bentley and Rolls-Royce years to catch up, but this Italian pioneer ploughed a field that manufacturers are now harvesting highly lucrative, posh, fast 4x4s from. More importantly, the LM also spawned the DNA for the new Urus, adding credibility to the whole project.

Yet there remains a sizeable stigma attached to performance SUVs. Though hoovered up by the rich, they're largely lampooned for trying to achieve incompatible goals. Getting the opportunity to thrash one around a deserted quarry is a sure-fire way to silence any haters. 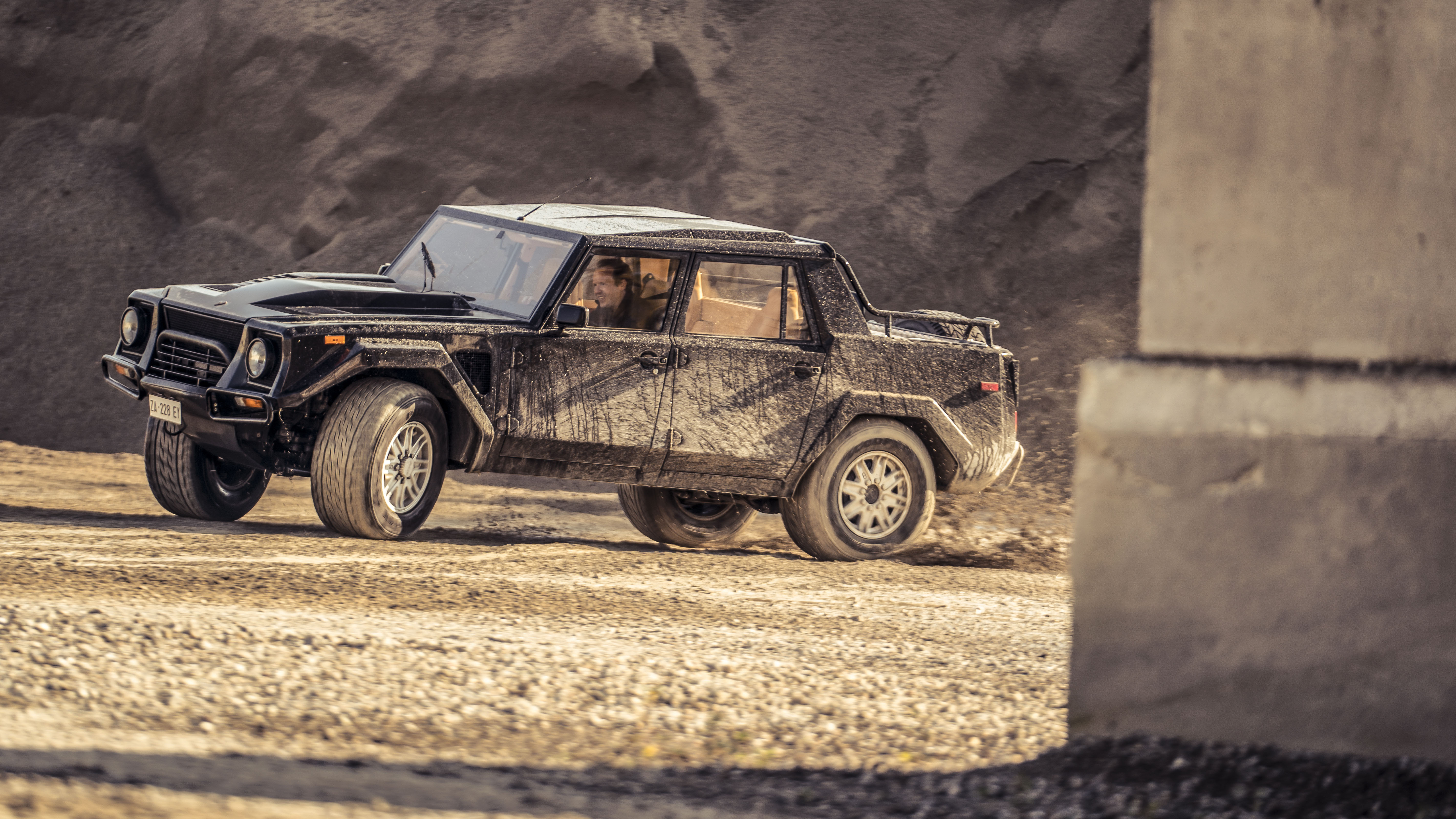 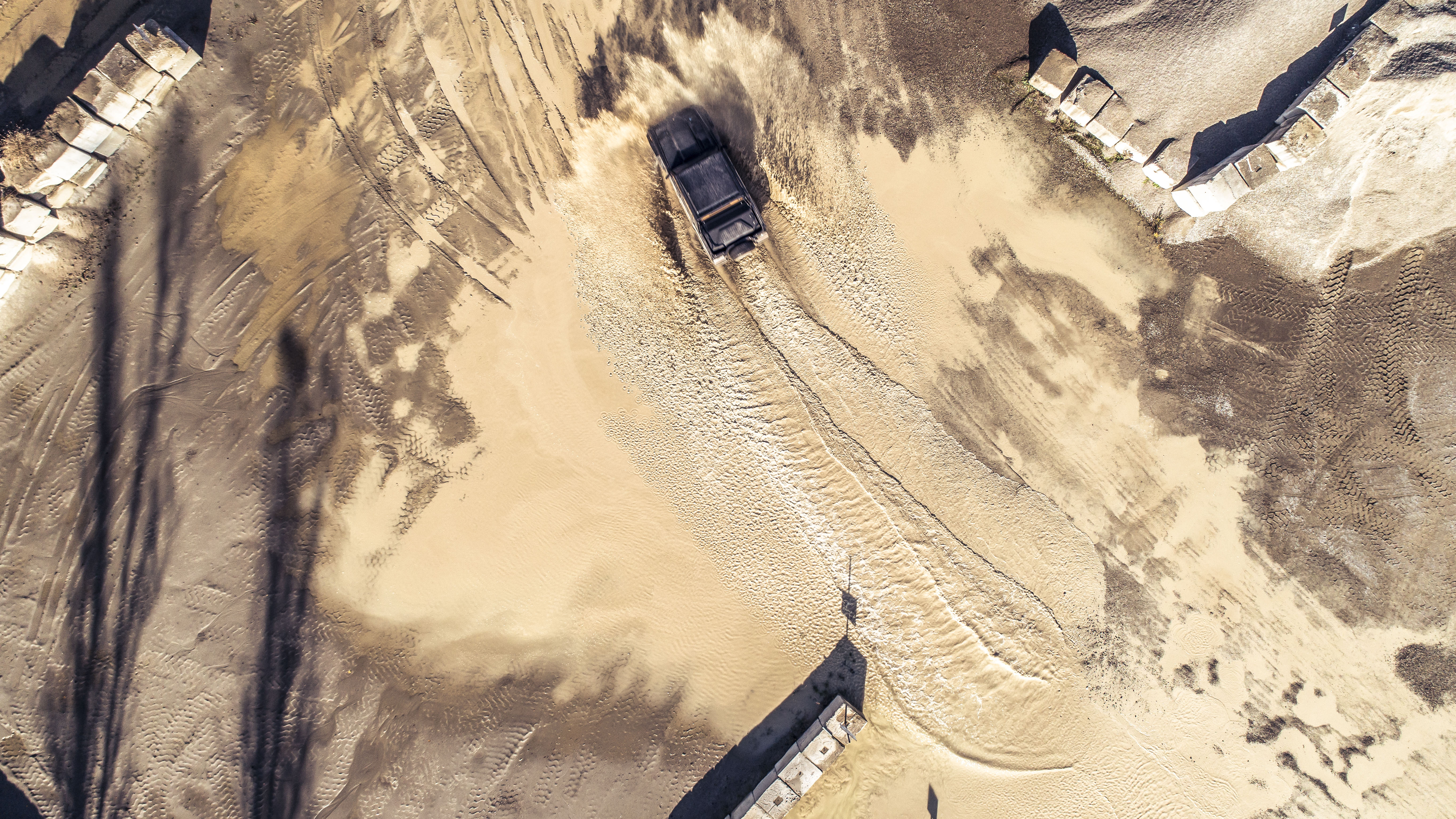 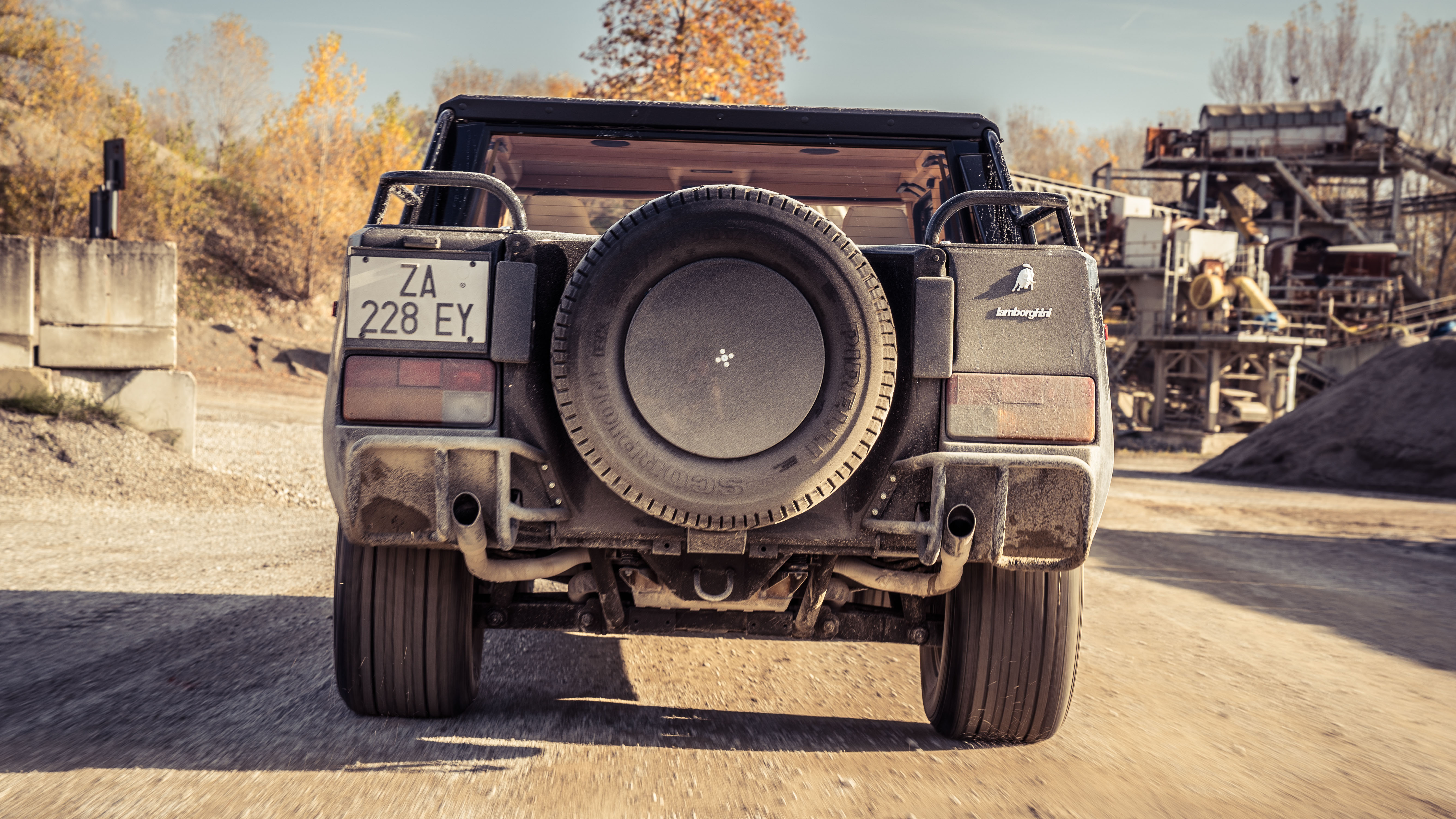 With the long, sticky throttle pinned, the LM sways on its supple suspension from one slippery corner to another, giving my pipe-cleaner arms a workout to keep the incongruous 4x4 pointing where I want it. But it’s undeniably capable; hustling its weight from one gloopy puddle to another, firing through an abandoned building, then up a shingle wall with ease – all to the blissful tones of a shrieking engine straight out of a Countach.

It has 450bhp, 4WD, three self-locking diffs, massive chunky run-flat rubber, weighs nearly three tonnes, is smothered in leather and looks like a Tetris block. No wonder Colonel Gaddafi, Mike Tyson, Pablo Escobar, Tina Turner, Hunter S. Thompson and Sylvester Stallone (the most intriguing episode of Come Dine with Me you'll never see) all had one.

But with lawsuits, supercar hardware, financially crippling consequences, much secrecy, the inclusion of the military, then a few despots, and a sprinkling of celebrity, the story of how the LM002 came to be is good enough for its own Netflix series.

It all started back in the late Seventies, when Lamborghini wanted to make the most of a war-happy zeitgeist and a military industry with money to burn. With this in mind, the Italians spannered together a rear-engined, Chrysler V8-powered, panel-less off-roader, in conjunction with ambitious US defence contractor Mobility Technology International.

It was called Cheetah, and the aim was to flog it to the US military. Problem was, it was rubbish. With that heavy engine out back, the handling was appalling. This, plus the fact that the US military couldn’t import it and the design was embroiled in a lawsuit, meant Uncle Sam passed and gave the contract to the lookalike Humvee. Worse than that, the episode sullied Lambo’s reputation and left it on its knees. 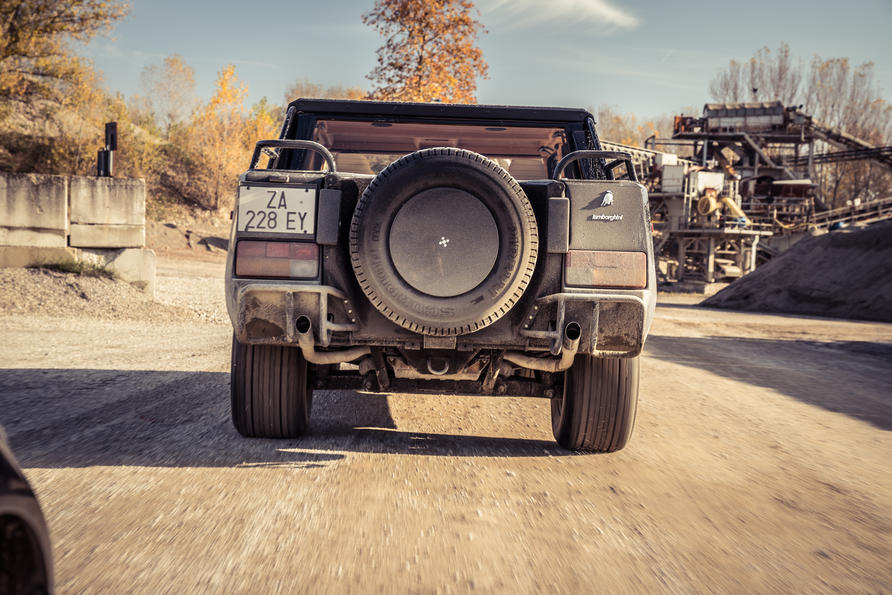 Lambo resurrected the project in 1981 by putting a different engine in a similar design and calling it the Lamborghini Militaria number 1 (LM001). Still rubbish.

Back to the drawing board, where much head scratching and cigarette smoking occurred. Realising that the others were a bit crashy with the engine hanging out the back, they popped it in the front. And not just any engine, but the 5.2-litre V12 from the most lust-worthy poster car of all time: the Countach. Genius.

With its target market still the military, the new car – LM002 – didn’t fly off the shelves when squaddies realised that tuning six double-barrel carburetors in the middle of a battlefield was more than a bit of hassle. So Lambo changed tack and made a civilian version.

The non-warzone-spec interior was slathered from headline to floor in lavish Italian leathers, thick carpets, electric windows, a roof-mounted stereo, aircon and a bespoke set of mammoth Pirelli Scorpion tyres – specially commissioned with custom run-flats. If you wanted more power and had deeeep pockets, you could spec a super-hot version called the L804. That road-going model had a 7.2-litre marine V12, one normally fitted to Class 1 offshore powerboats.

In seven years of production, only 300 LM002s were sold. Somehow, I’ve got my hands on one. A pristine black example recently refurbished by Polo Storico (Lambo’s internal restoration arm), which, just a few hours ago, was so shiny it looked fit for the lawn at Pebble Beach. Not anymore. Now looking like it’s had a messy fight with a muck-spreader, my guilt is starting to sink in for the guy who’s got to clean it. But how often do you get to stomp around what feels like a level on Call of Duty in a rare-as-you-like Italian V12 SUV?

So after a quick scouting lap, I assess a particularly large puddle through a fast-left hander. Opening the door, I dip my trainers into the cocktail of sloppy earth and water to assess the true extent of muddiness. “Very” is the official reading. 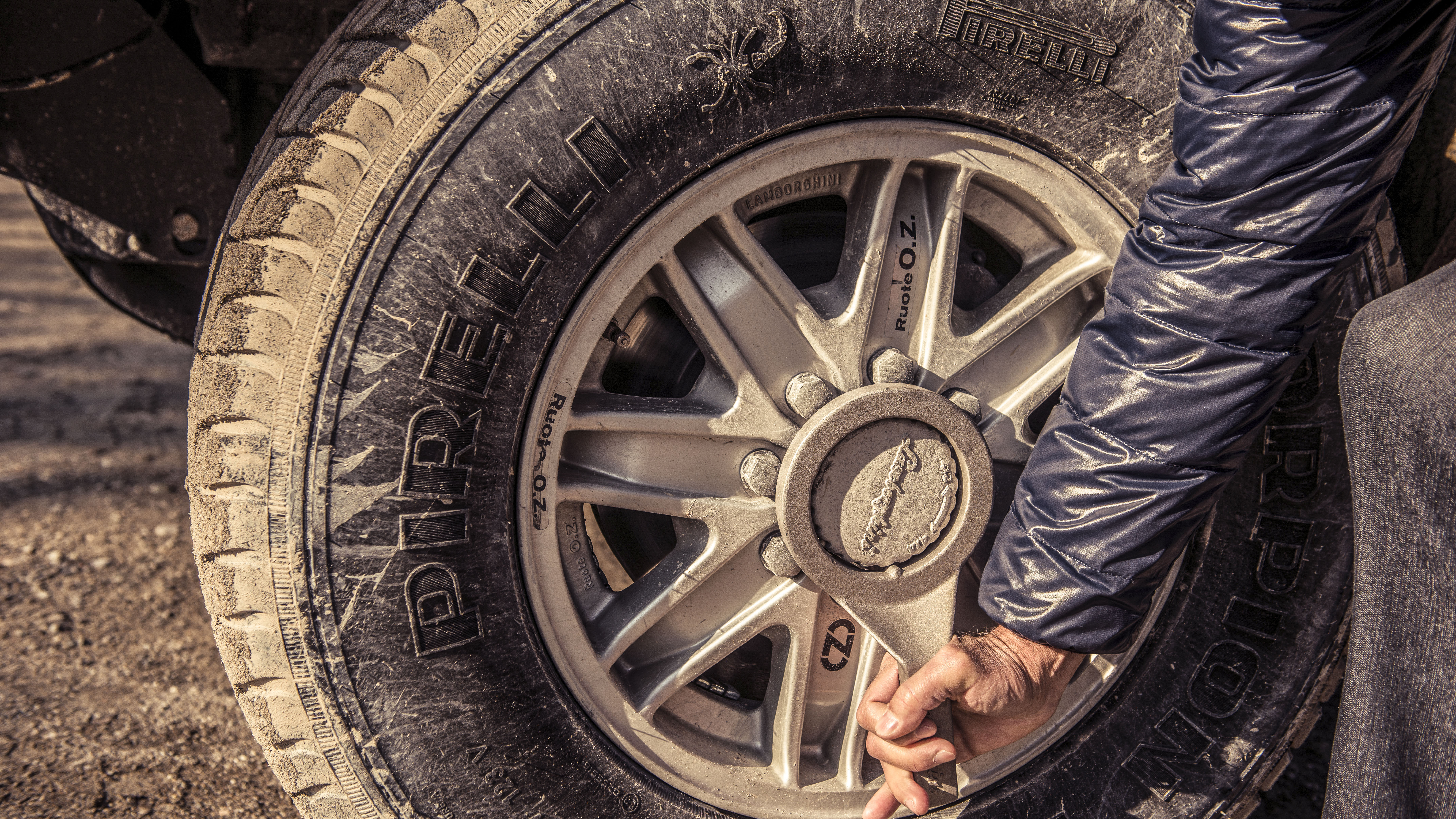 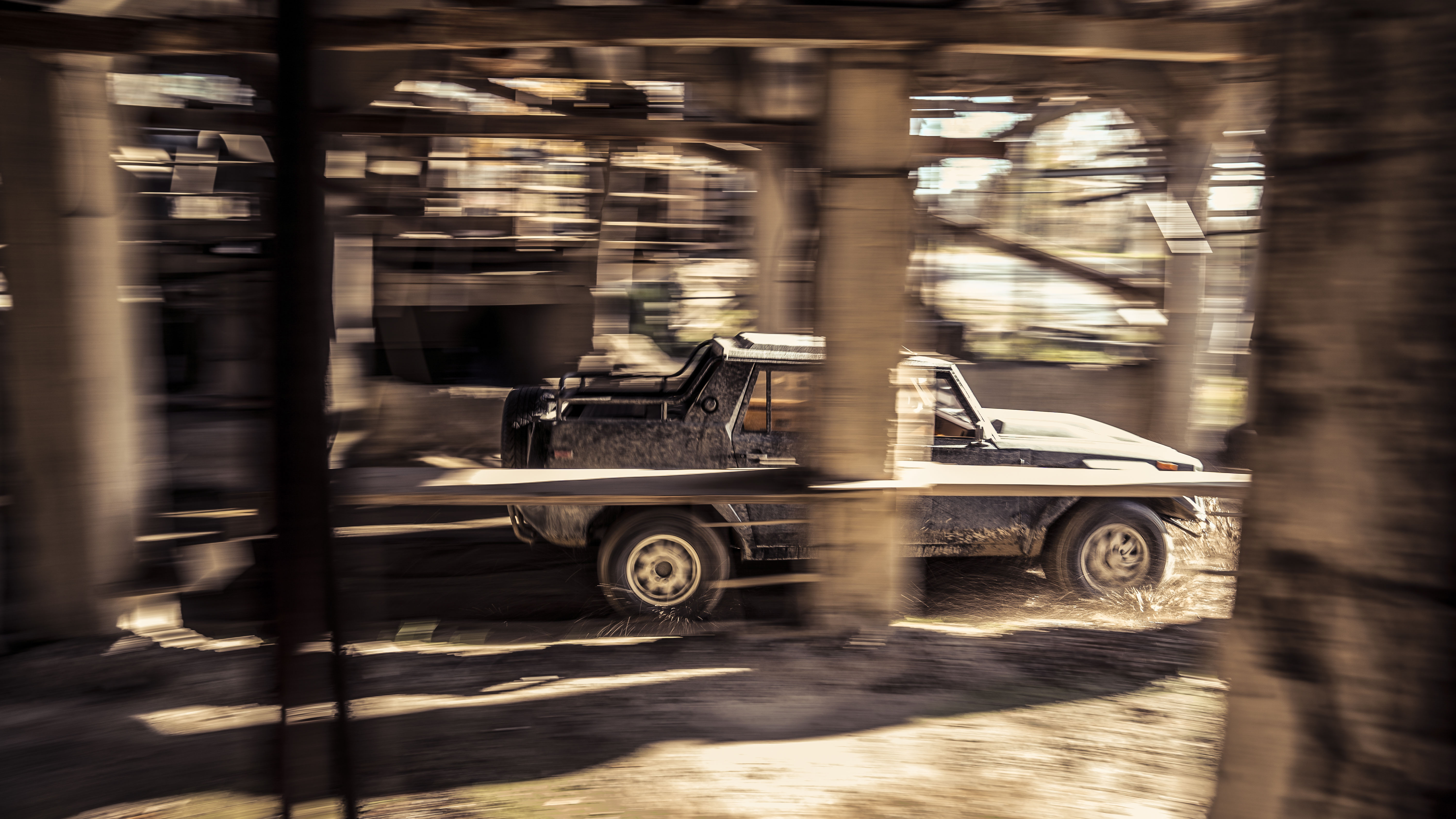 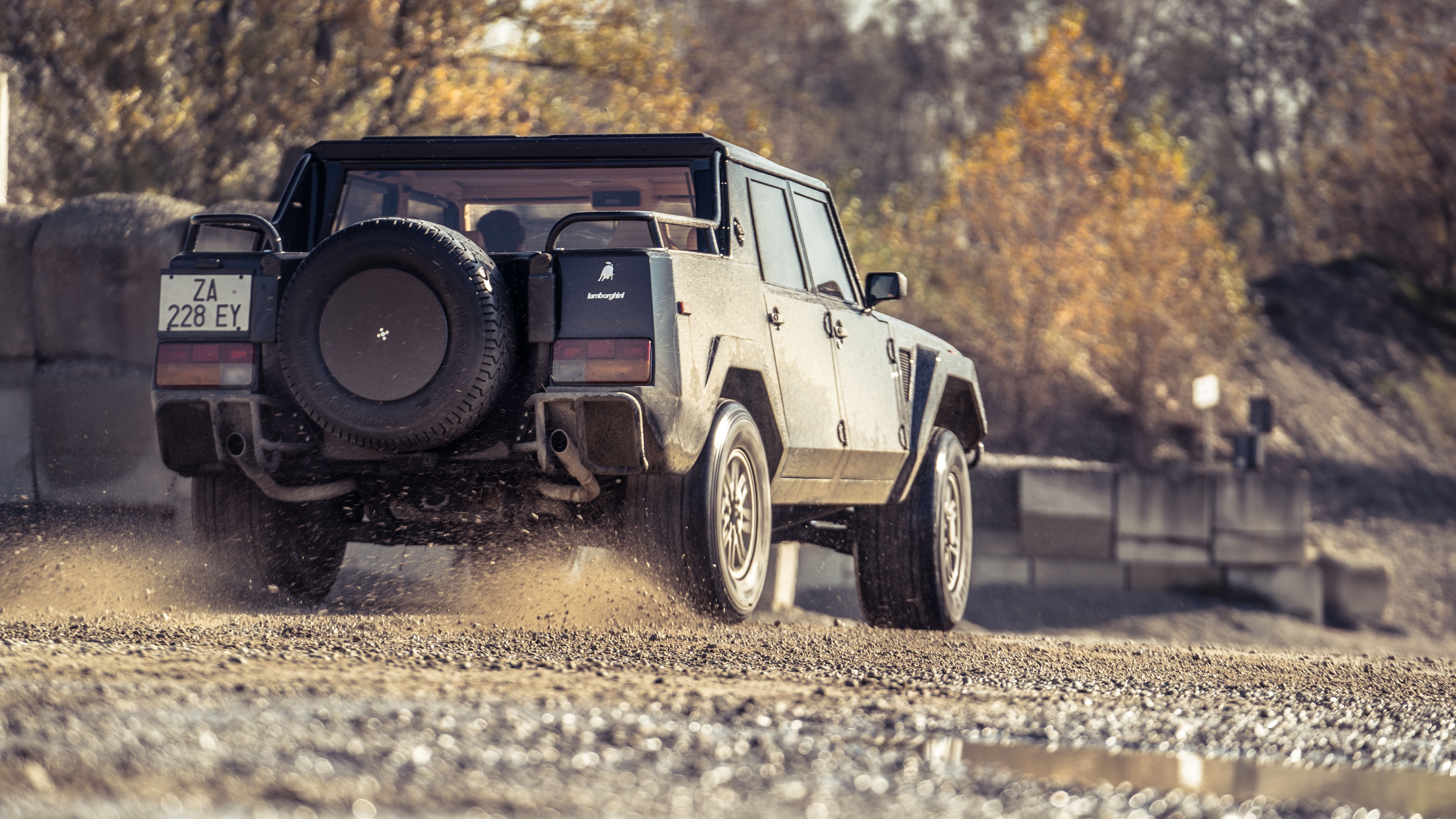 Clinking the heavy door shut, I shuffle back into the sumptuous and aromatic butterscotch leather seats. Given the square footage available, the cabin is comically packaged. At each corner is a seat, while an extremely wide transmission tunnel acts as a broad division between passengers. Rear occupants sit in stadium seating. The driver has to negotiate a non-adjustable steering wheel, a selection of chunky, colourful and oversized switchgear that an astronaut could operate in a space suit, plus two supplementary 4WD levers at the knee and hip… once you’ve taken the massive torque wrench from under the rear seat and manually locked the two front wheels into 4x4 mode, that is. For ease, I stick to 2WD.

Firing the big V12 into life culminates in a raucous and hilarious howl. Your ears say "Countach”. Your eyes say “WTF”. I check the fuel gauge. It’s still nudging full. Filling the LM002 is not only a highly effective way to haemorrhage money, it's also an exceptional method of melting your moral compass: £380 worth of fuel is thrown into the 290-litre tank... only to be burnt in a matter of minutes.

With 325mm wide tyres, the rhythm and movement of the LM is a lot more manageable off-road where it carves an even line, rather than darting in and out of ruts like it does on a public road. Incredibly, on the loose, the tubular steel spaceframed chassis with its independent suspension is playful and predictable. I wasn’t expecting that. But winding out the V12 to free all the 450-odd horsepower – a welcoming juxtaposition to performance SUVs of today that deliver uppercuts of torque from 1,000rpm – is just as good as I’d imagined. 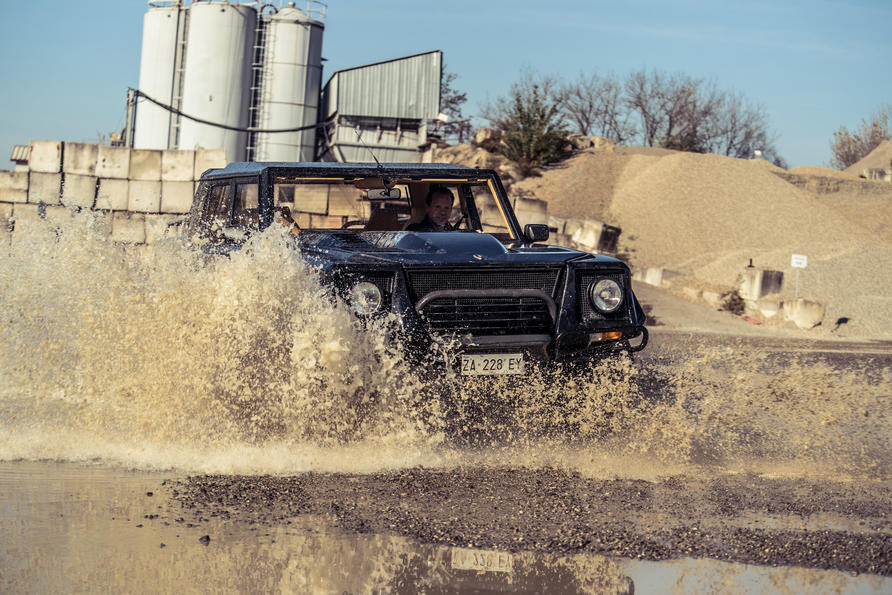 Being a later fuel-injected model with a considerably smaller power dome and airbox protruding out of the bonnet, the LM’s boxy shape is quite easy to place – handy when the perimeter of your homemade rallycross track is littered with very hard, very immovable concrete blocks. Saying that, the steering is vague, gearlever in another time zone, and your passengers are so far away they basically have jet lag. Using the clutch is like trying to kick down the door of a bank vault. The brakes – despite being giant, ventilated, twin-caliper front discs and 12x3-inch rear drums – are utterly woeful. At least the pedal box and driving position aren’t as on the lash as say, the Countach and Miura.

Even so, I just can’t stop giggling at the fact that you can make what’s effectively a 35-year-old V12 Etch-a-Sketch a drift at nearly 80mph. It’s brilliant. What's not so brilliant is that after a few hours of spraying much of Italy up the doors, over the roof and into the next gravel pit, the fuel gauge’s needle is flickering worryingly over empty.

Not being part of the LM002's client roster, I have insufficient funds to fill it up and keep playing. Still, better to have loved and run out of fuel than never to have loved at all, right? 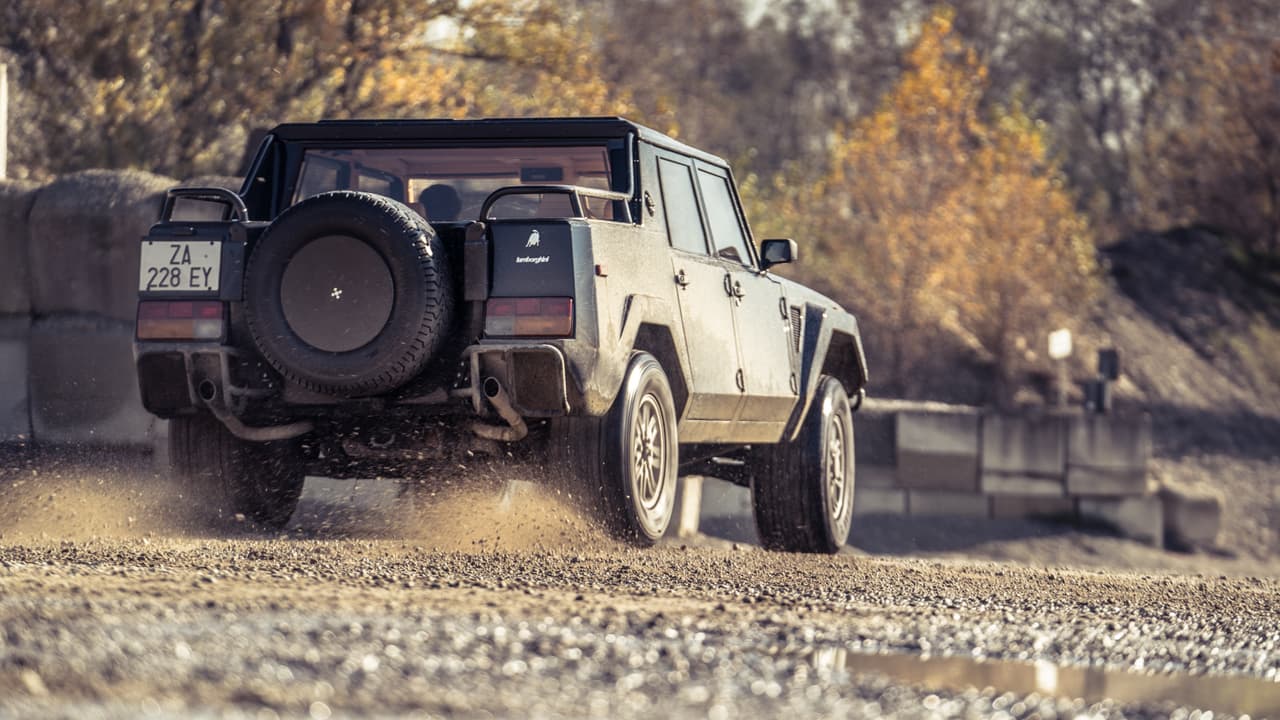