Sharks. A McLaren P1 GTR. Love of a Brazilian homeland. There’s a selection of the ingredients that were poured into the creation of the Fittipaldi Motors EF7 Vision Gran Turismo by Pininfarina. OK, the name needs a trim, but that’s an intriguing mood board.

The EF7 exists because of the most mouthwatering foundation a supercar can be conceived upon. A F1 world champion cherry-picking suppliers to build him the ultimate no-compromise machine. And, just maybe, a chance for the godfather of Italian supercar style to settle a professional score.

In 2011, after half a century of marriage, Ferrari cut ties with Pininfarina and established Centro Stile Ferrari – its own in-house design studio. The first Ferrari road car to emerge without the hand of Pininfarina forging its bodywork was quite a vehicle: the LaFerrari. So, Fittipaldi’s EF7 is the opportunity for Pininfarina to show Ferrari how it would have gone about the ultimate air flow-harnessing hypersexy two-seater. Should’ve called it LaFittipaldi… 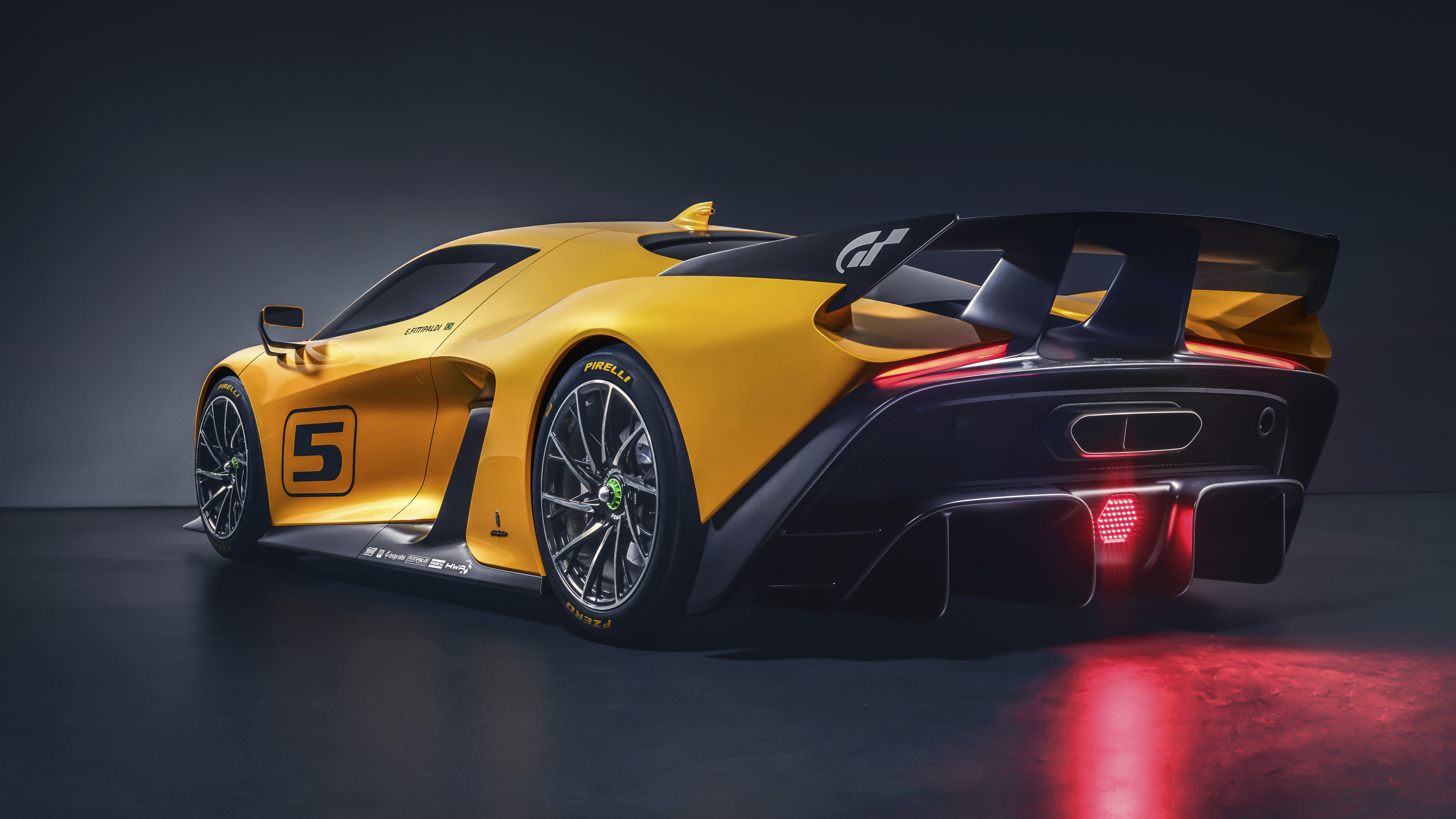 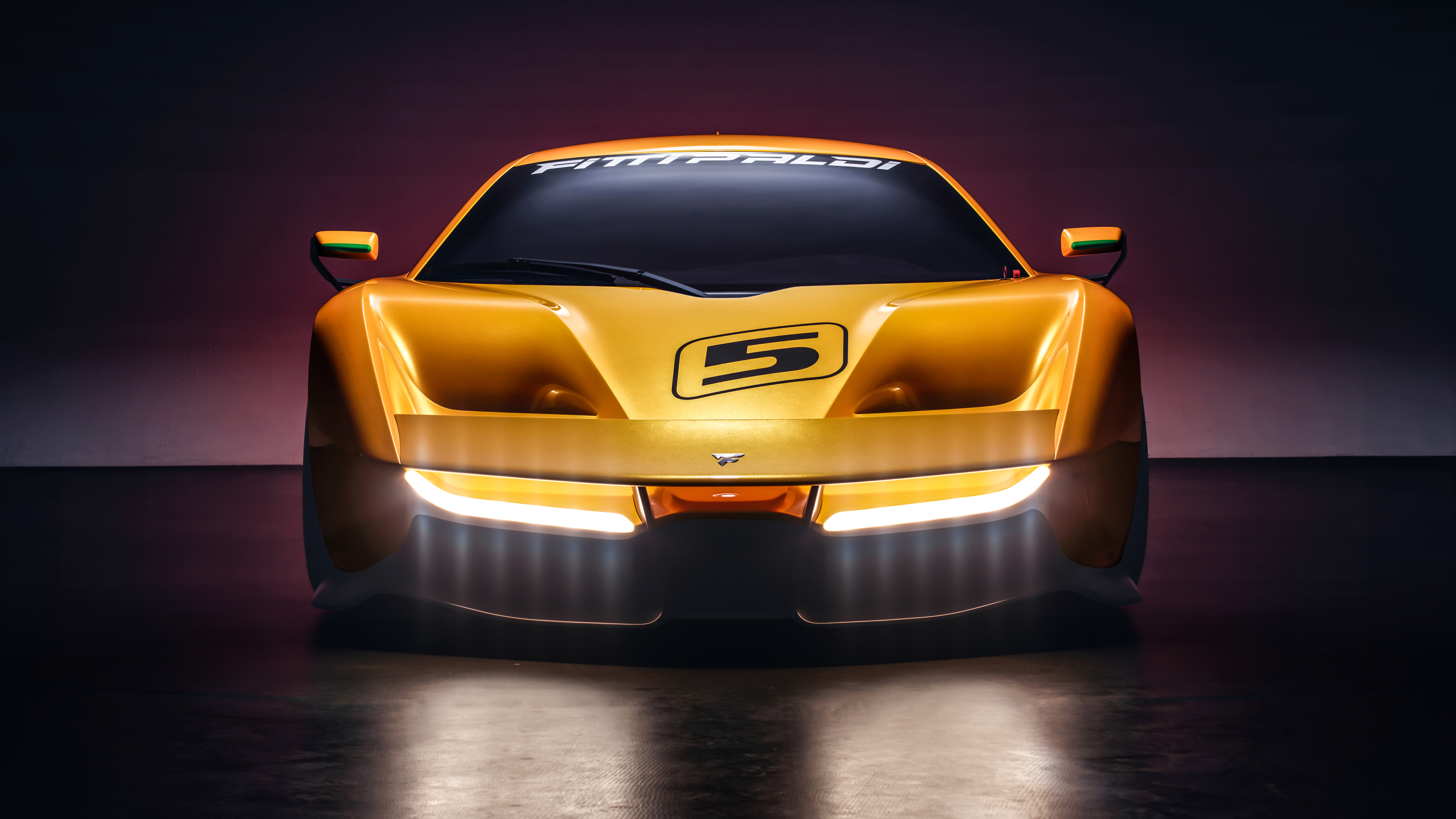 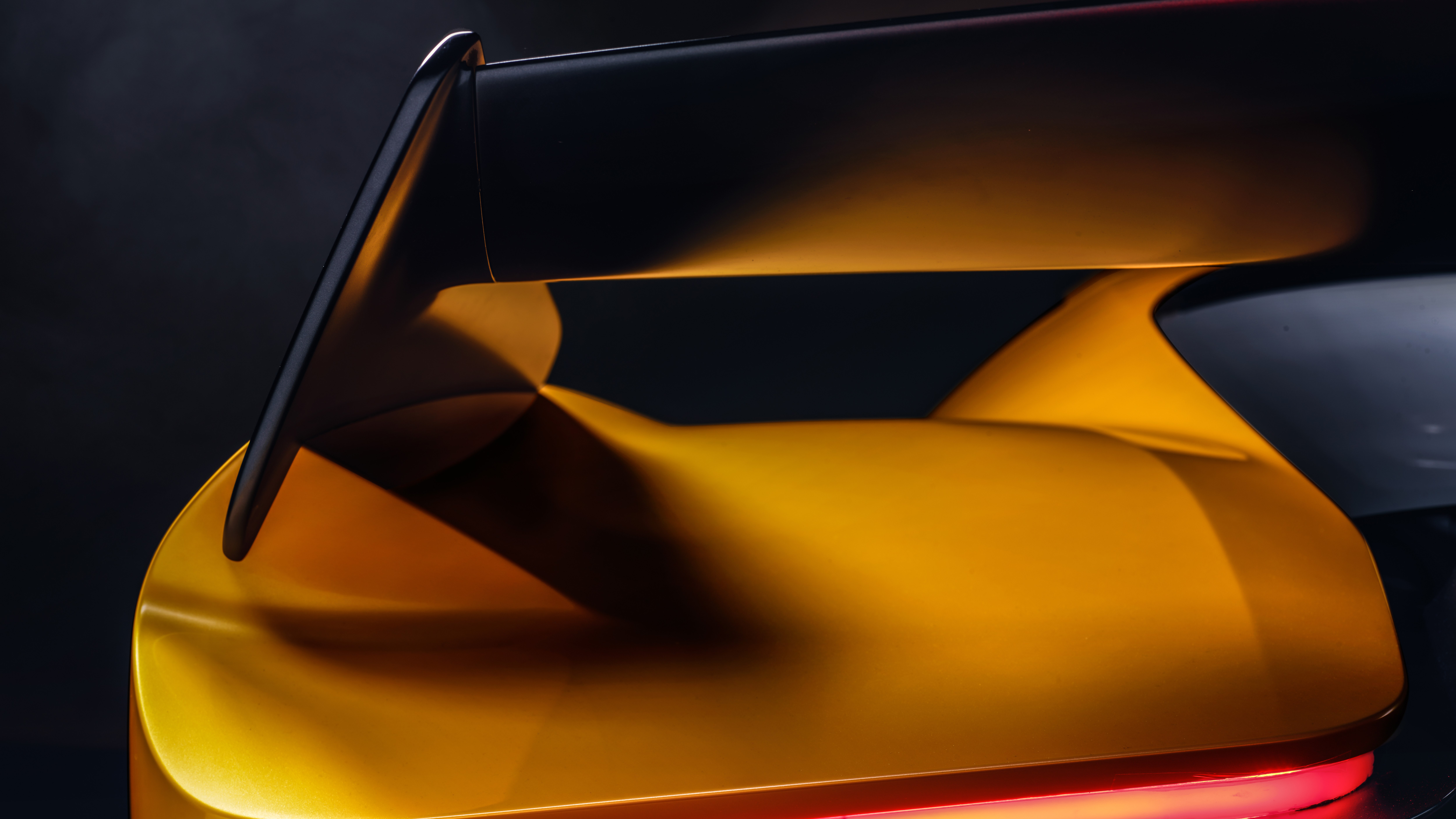 Where Ferrari aims to put F1 know-how on the street, Pininfarina wanted a great white shark with wheelnuts. And it’s not just the fin on its back. “We always like to design shapes inspired by nature,” says CEO Paolo Pininfarina. “Shapes that are fast in water are fast in air. That front wing? It’s the mouth of the shark.”

Emerson himself is now 70 years old. When he was 26, he became the youngest man to win the Formula One world championship, taking five wins in the 1972 season perched within the flimsy black and gold bodywork of the John Player special Lotus 72. Two years later, the São Paulo-born upstart who’d previously shown promise racing motorcycles and hydrofoils before winning the British Formula Vee and F3 titles, took McLaren’s dominant M23 to his second F1 crown. After a sabbatical and switch to American oval racing, Fittipaldi won the 1989 and 1993 Indianapolis 500. 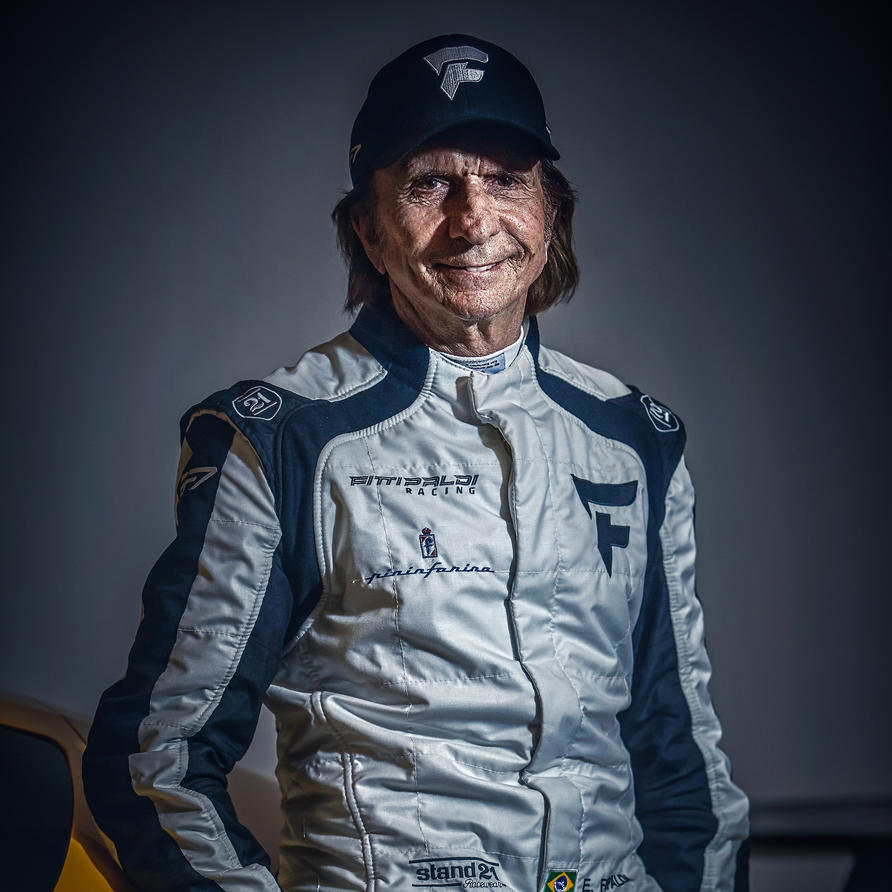 Emerson could happily retire on that CV, perhaps to one of his infamous orange groves (he drank orange juice, not the traditional winner’s milk, after conquering the ’93 Indy 500 and plenty of American racing fans have never forgiven him for the ‘insult’.) But no. Here he is, a decade past the age that’d score him a bus pass and cheaper cinema tickets in Britain, unveiling his optimal supercar. Form is temporary, class is permanent, and so is an adolescent excitement with fast, noisy cars festooned with razor-sharp wind harnesses.

“It is a dream”, says a friendly, enthusiastic Fittipaldi. He’s softly spoken, deliberately picking over English words in his gravelly voice. His eye contact is unbroken, but his hands gesture and articulate every syllable. “And now, I have done it, using German engineering, because they are the best, and Pininfarina design, for the same reason.” Paolo, grandson of company founder Battista, stands unmoved next to Emerson.

“When I first left Brazil”, continues the F1 champ, “I thought one day it would be my dream to have my own GT car. A car for the track: the lightest car possible.” Up go the hands, forefingers touched to thumbs like a conductor’s as if to symbolise delicacy and lightness of touch. “I wanted the lightest GT car in the world.” He stops short of actually quoting Colin Chapman’s mantra, but says, “When you drive F1 or Indycar, you need good agility and braking to make up time. When you drive a GT car after that [he’s using ‘GT as shorthand for a closed bodywork car with a fixed roof], it feels heavy and sluggish.” He mimes a car being ponderously steered left-right-left through a chicane, his hands wrapped around an invisible steering wheel.

Lightness being an obsession, Fittipaldi and Pininfarina drafted in German engineering firm HWA to build the EF7’s carbon core. Their track record includes the Le Mans-winning tubs in Porsche’s 919 Hybrid prototype, giving immense strength and contributing to the EF7’s kerbweight of an even 1,000kg. Which means the car produces 592bhp per tonne. How it delivers 592bhp was up to Emerson…

Shapes that are fast in water are fast in air. That front wing? It’s the mouth of the shark

“When you have a normally aspirated engine, you’re able to drive the throttle and steering together”, says the Brazilian. “Anyone who drives cars fast knows this. So a normally aspirated engine was part of my dream.” He relates this to a recent experience driving McLaren’s P1 GTR (“beautiful car – a very heavy car – but with a lot of downforce.”) Emerson wanted the aerodynamic performance of his car to be that competitive, but to do without the weight of battery packs or turbochargers and intercoolers.

“Our engine is all bespoke. It is a 4.8-litre, naturally aspirated V8. We have 600 horsepower [that’s European PS, or 592bhp in Anglospeak] at 9,000rpm.” I note that the power and rev band is identical to a Ferrari 458 Speciale’s engine. Could there be some carryover there? Emerson twins a firm shake of the head with an adamant denial. “The engine is brand new, has done a lot of dyno testing, the gearbox casing is ours, and the rear wishbones are bolted straight onto it like an F1 car”. The transmission is a seven-speed paddleshift unit, chosen for lightness and ease of use, because the whole point of the EF7 is it’ll be easy to drive, and safe. Emerson namedrops ‘safety’ five times more than power and twice as often as he mentions about his baby’s lightness.

Intrinsic safety won’t matter to the countless petrolheads who’ll get to drive the car virtually (it’s a downloadable bonus for the Gran Turismo PlayStation simulator), but it will encourage the 39 lucky (and rich) people who’ll own an EF7 for real – each daubed in a bespoke colour and unique racing numeral – to actually get out and thrash the thing. Thirty nine, incidentally, is to commemorate one for each of Emerson’s international motorsport victories. Fittipaldi incessantly repeats his message that a fast car needs to be so safe, even a novice can enjoy it, but experienced drivers can also push the limits and be equally sure it’ll look after them if the track should run up short of their nerve. 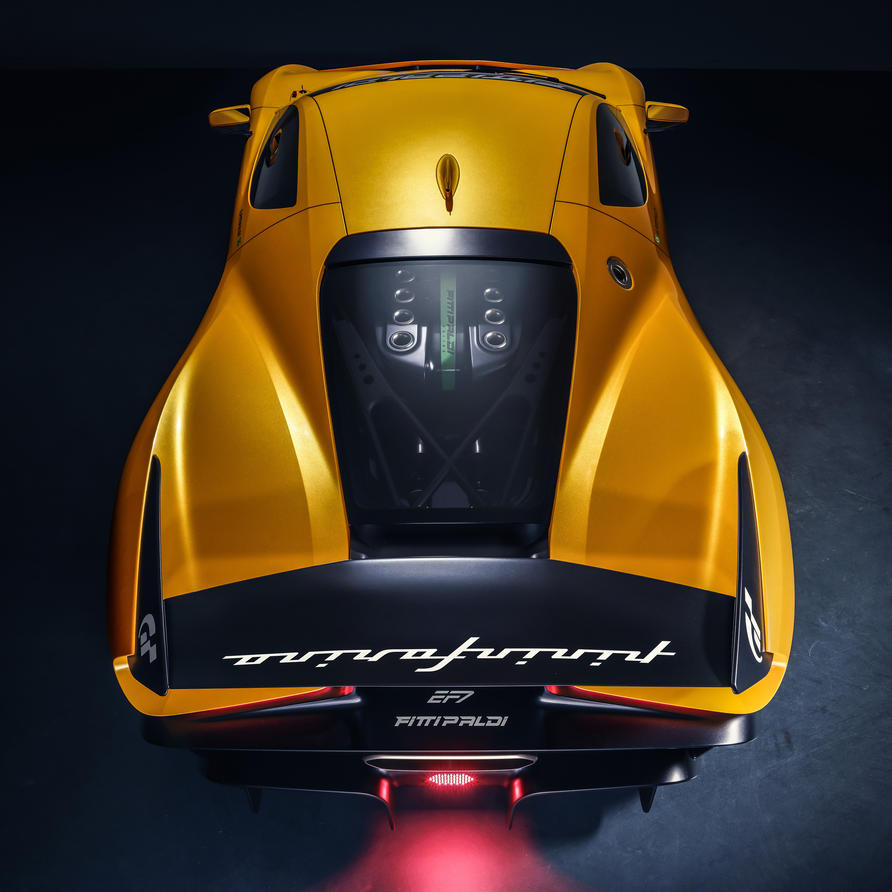 “This car is between 500 and 650kg of downforce at 155mph, which is very similar to the McLaren P1. This was our goal – to make the car forgiving. It’s the only car on the market that has a full FIA-certified carbon cage. Our owners, the guys who buy the car, will drive fast and safe… but mainly fast, I think.”

Sure, but the world isn’t actually short of millionaire members clubs staffed with circuit-exclusive supercars and no irritatingly restrictive racing regulations. Ferrari has the XX programme, which has catalysed similar efforts from McLaren, and the Aston Martin Vulcan. Was Emerson – or Pininfarina – inspired by rivals? Apparently not. “We are doing the opposite – designing a racecar then taking it to the street”, says its creator. “Our objective is to make a simple car to operate – a one-man show. You arrive at the track, set the tyre pressures, and you drive – you don’t have any turbos or electrical motors to worry about. The car is mechanically simple – every detail has been considered for lady and gentleman drivers.”

Of course, what we want next are a few more EF7s, with thinly treaded tyres and a numberplate decal pasted atop that innovative upside-down front wing. A fresh start-up supercar brandishing F1 pedigree, a wailing atmospheric engine and shark styling.

“We start from the track and then we go on the street as a second step,” says Paulo tantalisingly. Emerson backs him up: “In two years, for sure, we will homologate the car for the street.” An upstart supercar from a young Brazilian who went on to conquer the motorsport world. It’s got form. 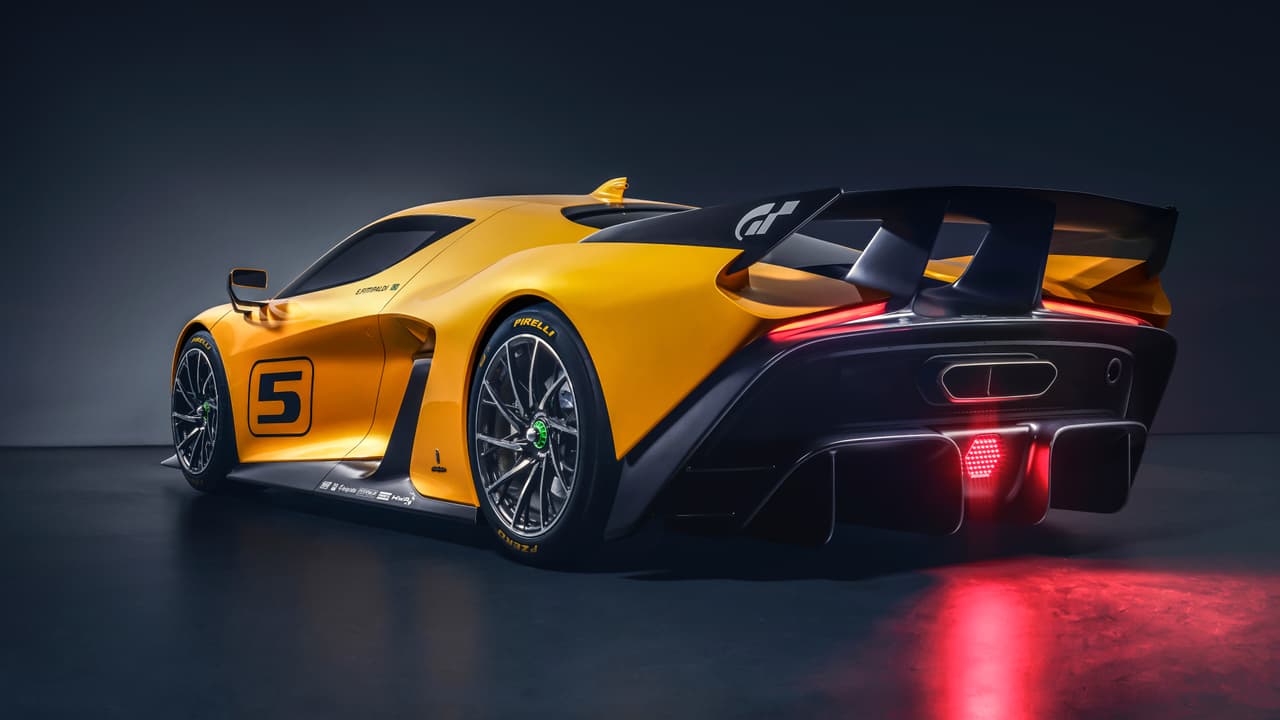