And the winner is: the Ford Fiesta! Thanks for playing, good night everybody! That’s what the charts say. In 2019, the Fiesta was once again Britain’s favourite car. This version’s into its third year on sale, but Ford still shifted 77,883 of them.

However, cast your eye a little wider and consider Europe together, as is unfashionable these days, and the Fiesta gets properly walloped by the Renault Clio. It’s Europe’s best-selling car – eight years, on the bounce. The Clio is a phenomenon, beating the mighty Fiesta down into fourth place on the continent. The Opel Corsa – still stubbornly a Vauxhall on these pleasant pastures, thank-you-very-much – only just scrapes into Europe’s top 10. The onslaught of crossovers has booted it out of the bestseller list over here. 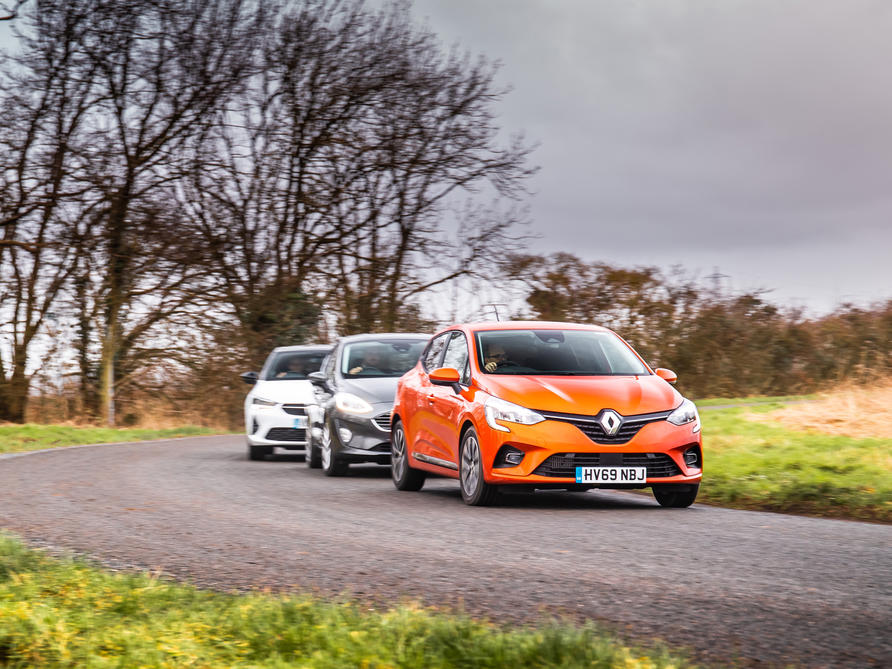 So, the new Renault Clio, emboldened and sitting atop a fresh, lighter, roomier platform shared with the Captur, is out to take a scalp.  The all-new, almost all-French Vauxhall Corsa – which is actually a Peugeot 208 underneath, since Peugeot-Citroen bought out Opel-Vauxhall – is out to get taken seriously again.  The all-electric Corsa-e will help there; another boon of copying Peugeot’s homework. There’s no electric Clio yet, nor will there be. You buy a bespoke Zoe for the Renault EV experience. But there’s no electrified or plug-in Fiesta whatsoever. Not that sales have suffered, eh?

These three are the current heartland spec: 1.0-litre or thereabouts triple-cyl petrols, with a light-pressure turbo providing the torque hit. The Clio is one trim rung further down the ladder than the others, but feels none the worse for it inside. Similiar money will get you into a Corsa SE Premium or a Fiesta Trend (the entry spec, since Ford spring-cleaned its line-up). Time to get reacquainted with the benchmark.

Ever wondered what a Fiesta has in common with a McLaren supercar or a Rolls-Royce Phantom? It’s the sense of immediate ‘rightness’. Climb in, and the driving position adjusts to low-set, wheel-at-your-chest, touring-car-wannabe for me, but my nan would be just as comfy, with the seat jacked up into Heathrow airspace and the seat-heater button glued down. The hideously nerdy but oh-so-important details like control weights feel beautifully in sync, from the first dip of the clutch, selection of a gear and jink of the steering. 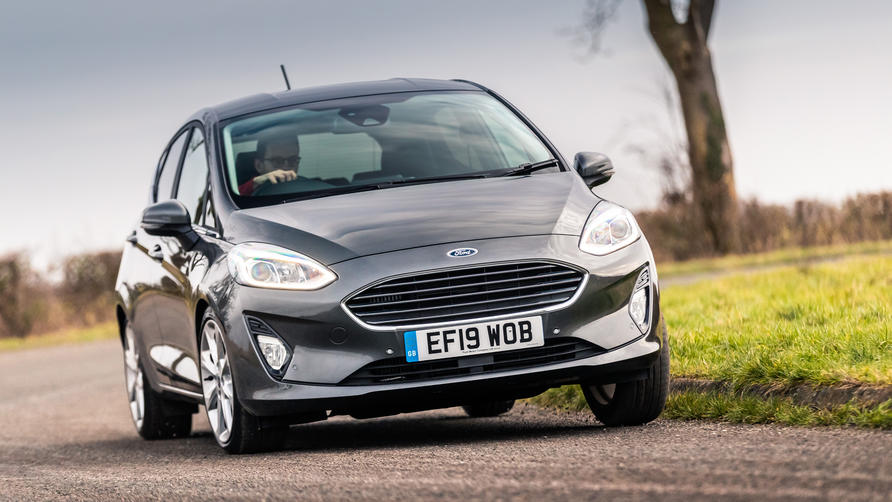 Now, you’re reading Top Gear, so how a car handles matters to you. Don’t deny it – you’re among friends. That’s why people like us cherish the Fiesta, because, despite being the Michael McIntyre of cars (inoffensive, crowd-pleasing, bloody impossible to escape most of the time), it’s also the best steer in its class. The combination of alertness, agile responses to pitching the Fiesta into a corner and the sheer maturity of its behaviour when cruising, or dicing through town, or dealing with shoddy roads, is uncanny. It feels like a lot of time and money has been poured into those road manners, and that sense of well-bred maturity is why, even for people who think of F1 as a computer key instead of a race series, the Fiesta feels ‘nice.’ So they buy one.

This one’s a cracker: plush Titanium trim meets the 123bhp version of the familiar EcoBoost tri-cyl engine. Chuckable as the Fiesta is, the extra 24bhp versus the top-selling 99bhp one isn’t super necessary. Then again, it’s only an extra tenner a month on finance.

Even with the handbrake left on, it’ll blow the Clio into the weeds, for the Renault is an excellent little car in search of a decent engine. This 999cc 99bhp effort is the most powerful option Renault will sell you, and while it matches the Corsa for horses, it’s too little and too late on torque. The all-French car is 33lb ft down on the Frenglish one, over a small rev band, and once you’ve factored in the hollow gearshift only offering five wide-spaced ratios instead of the other two’s six, momentum is hard to come by.

Since you’ll be late for everything, Renault has thoughtfully made the cabin a very nice place to be indeed. Park those jokes about French cars having trim flakier than a croissant – not here. The Fiesta has more metal garnish about the place, but the Clio’s got higher-quality plastic and squishy leather-ish flourishes. 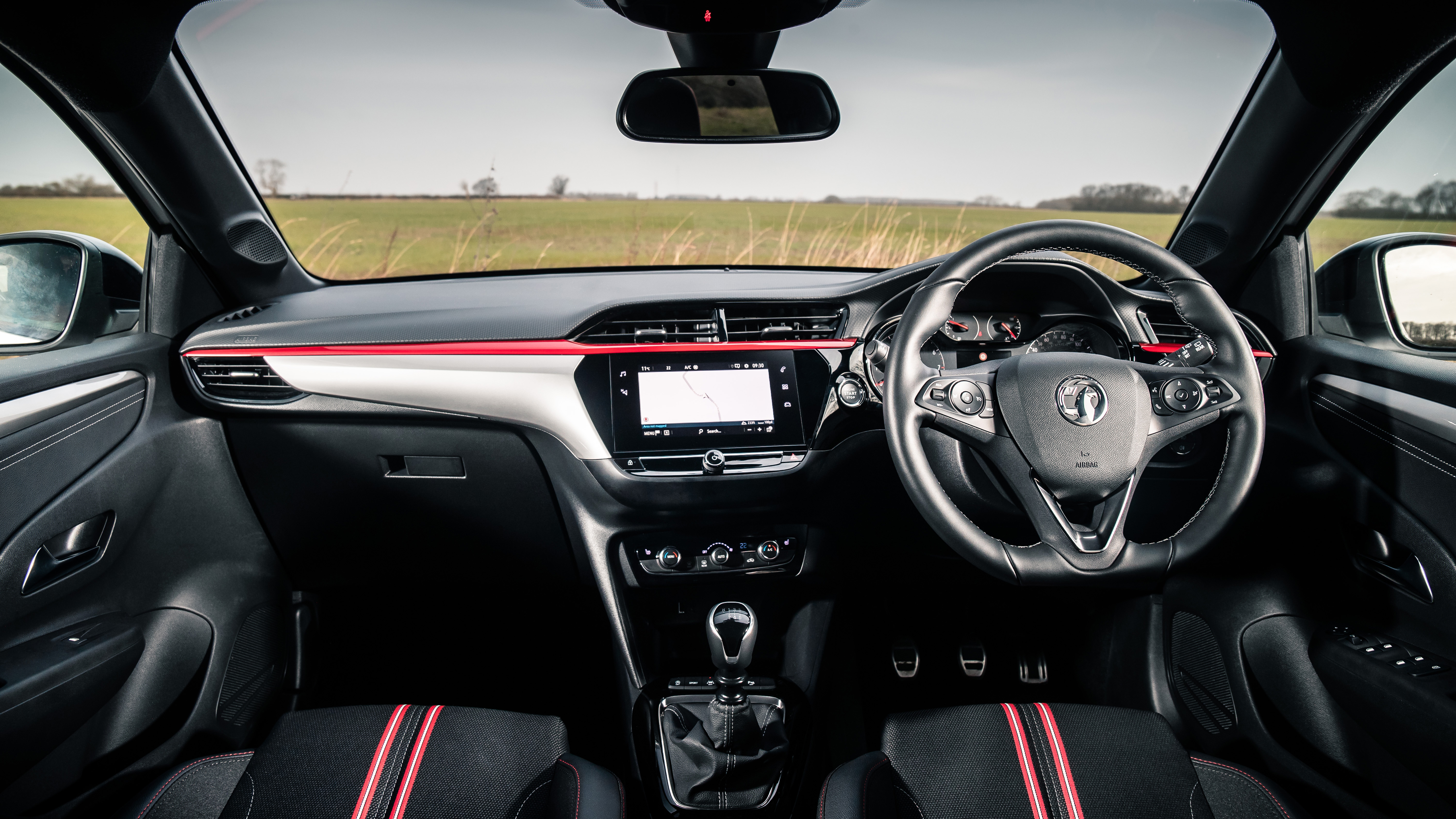 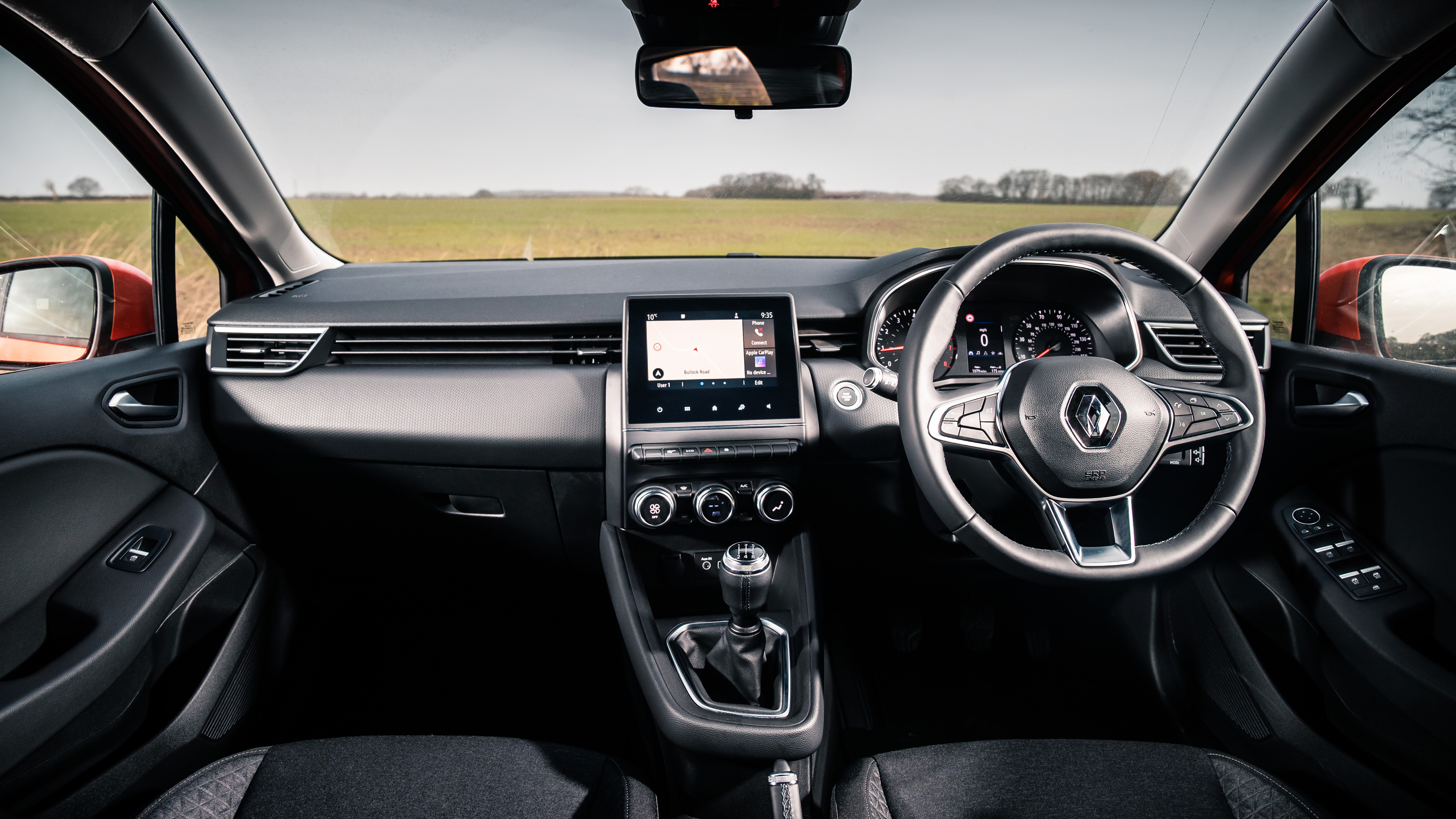 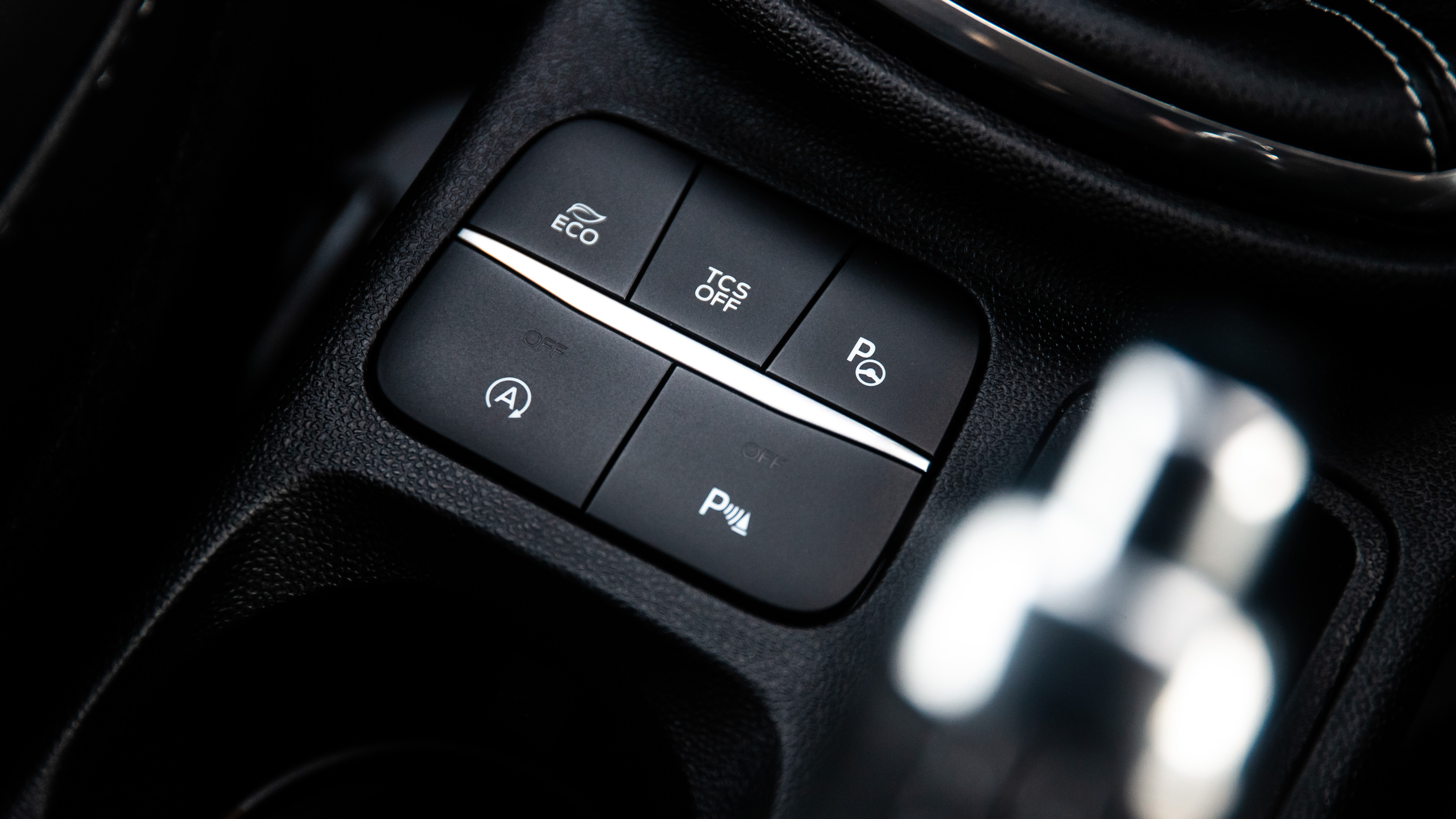 This one’s in Iconic trim and, despite that vom-worthy name, it’s more modest than the others, on price and equipment. For a bang-on rival, you’d want an S Edition, but you know what? Beside losing bum warmers and a toasty steering wheel, there’s very little you feel is missing in this lowlier Clio after stepping in from the others. There’s auto climate, cruise control, Renault’s best-in-industry keyless entry-and-go set-up, and the 7in touchscreen is leagues - chasms, universes - better than the utterly rubbish old system we’ve derided in the Megane and Kadjar. It’s snappy, and the main menus are fairly easy to get your head around. Compared to what went before, it’s a revelation.

On first impressions, that’s what I thought of the Corsa. Driving it overseas before Christmas was like having an out-of-body experience while coming around from heavy sedation. I was driving a Vauxhall Corsa and... enjoying it. Problem is, that was not one bound for the UK.

You can buy the 128bhp 1.2-litre three-pot in the Peugeot 208, but Vauxhall is only offering this 99bhp effort in the Corsa over here. It’s fine – smoother than the Clio and less strangled – but having sampled the forbidden fruit, it’s less endearing. And then there’s the gearbox. Of all the things you wouldn’t want to inherit from Peugeot, it’s this: a six-speed manual so lightweight and baggy I wouldn’t be surprised if there’s a five pence tax for each use. At all costs, get yourself into the automatic Corsa – it’s a superb, grown-up eight-speeder that does wonders for boosting the perception of quality.

Ever wondered what a Ford Fiesta has in common with a Rolls-Royce Phantom?

Lacking a depth of quality has been the Corsa’s curse. In many ways, it’s the opposite product to the Fiesta: a sensible supermini that sells in droves, but without making any effort to handle sweetly, have a class-best cabin or generally be any more memorable than the last time you loaded the dishwasher. It’s always smacked of “yep, that’s good enough”.

However, the new Peugeot 208 is superb, and Opel’s design team, led by Brit Mark Adams, has turned around a cracking-looking supermini on a knife-edge deadline. Less than two years from French coup to finished product. This should be a Corsa to get spooled up for, but when you apply some context and throw it in against box-office competition, it comes over all Tim Henman.

The brakes are ridiculously over-assisted, so you need Strictly-winning footwork to stop without embossing a reversed Vauxhall badge on your forehead. The ride’s fine, even for this sporty SRi with its 17-inch rims and reinforced suspension mounts, but an Xbox controller has more reassuring steering feedback and the Corsa can’t match the Fiesta’s poise. 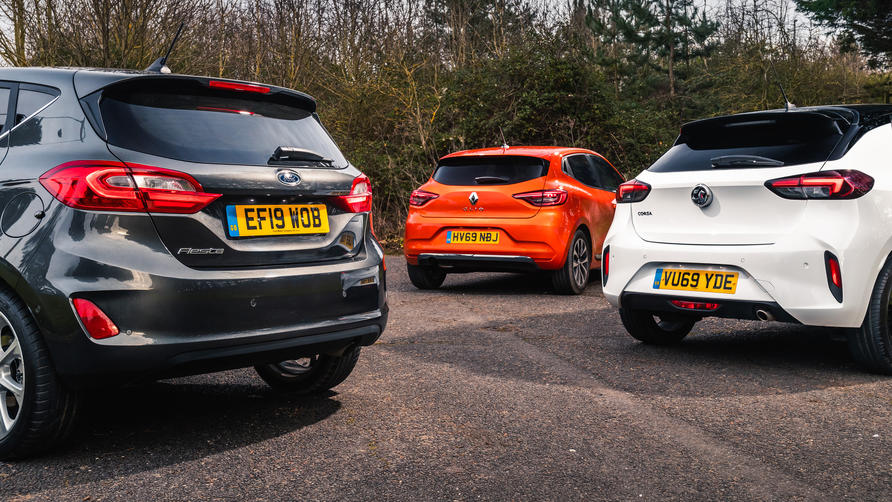 Inside, there are obvious own goals: the fiddly heater controls are tucked unhelpfully into a deep recess under the main screen. Details like door inserts and cupholders are grim. And there’s more bad French inheritance: because PSA can’t be arsed to shift the fusebox for right-hand drive cars, the glovebox is a pathetic thimble. And the PSA-supplied touchscreen, though much improved, can’t compete with the Clio’s, and particularly the Fiesta’s, for reaction time or simplicity.

My colleagues agree. Man-mountain Craig extricates himself from the Corsa offended by its half-hearted sporty seat stripes and red dash trim. I know what he means – compared to the Peugeot 208, the Corsa is almost suspiciously, cynically dowdy inside. It’s still just ‘good enough’ – if the only supermini you test drive while choosing is, as per usual, a Corsa.

Stephen’s very taken with the Clio, and agrees the Corsa’s visual promise but general mediocrity “makes him sad”. At least he’s got no complaints about the rear legroom (it would be inhumane to ask Craig to try), but to split the difference, I try the back seats of all three and, yet again, the Fiesta edges it. The Corsa – like its Peugeot cousin – is rather dark inside and pinched for kneeroom and headroom. It’ll swallow the kids, but adults will regret cadging a lift. The Clio’s better off for headroom, and the Ford will indeed carry four adults on an office lunch run without triggering an email to HR. But then... a Vauxhall fightback! It’s got the second-biggest boot, behind the Clio’s vast cargo bay, but beating the Fiesta’s sub-300-litre boot, plus a lower loading lip. 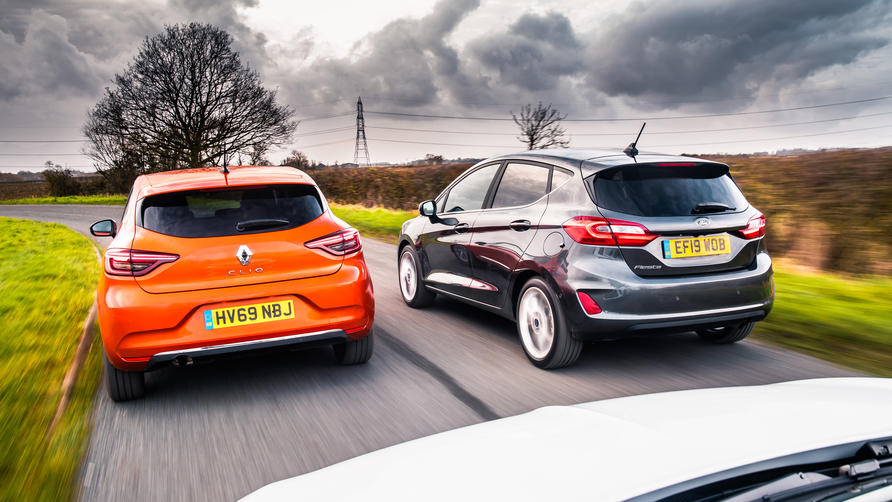 It also boasts (by a fraction) the lowest CO2 emissions, and the residual values are healthier this time around – though monthly payments are stiffer. It’s the only car of this size and price available with matrix LED headlights that manipulate the main beam to provide maximum night vision without dazzling oncomers. And, with the auto gearbox freeing up space for your clutch foot and binning the risible manual shifter, it’s a worthy little car.

Decent and good enough – the usual faint praise damning the Corsa, then. This is the best Corsa ever, but that’s like saying you have a favourite Star Wars prequel. You can do better with the vastly improved Renault Clio.

Once again it’s gone chic, but there’s also – finally – an injection of build quality and proper on-board tech. Incidentally, with the Clio you have to swerve the auto ’box like a high street chugger – it’s a seven-speed dual-clutch that’s jumpier than a dog on bonfire night. Pity, since the manual is incompatible with many of the Clio’s traffic-friendly driving assistance tricks.

However, the Clio’s slightly less spacious cabin, so-so handling and most of all its breathless engine, gift victory to the old boss. No other supermini is as rounded as Ford’s – even if the Clio (and that 208 we’ll be rounding up soon) have leapfrogged its cabin ambiance. Stick to the 99bhp engine, go for Titanium or ST-line spec and the Fiesta becomes, like a 3 Series Touring, or Golf GTI, one of the all-time, all-the-car-you-need heroes. Like I said at the start, the deserved winner is indeed the Ford Fiesta. But I would say that – I’m British. 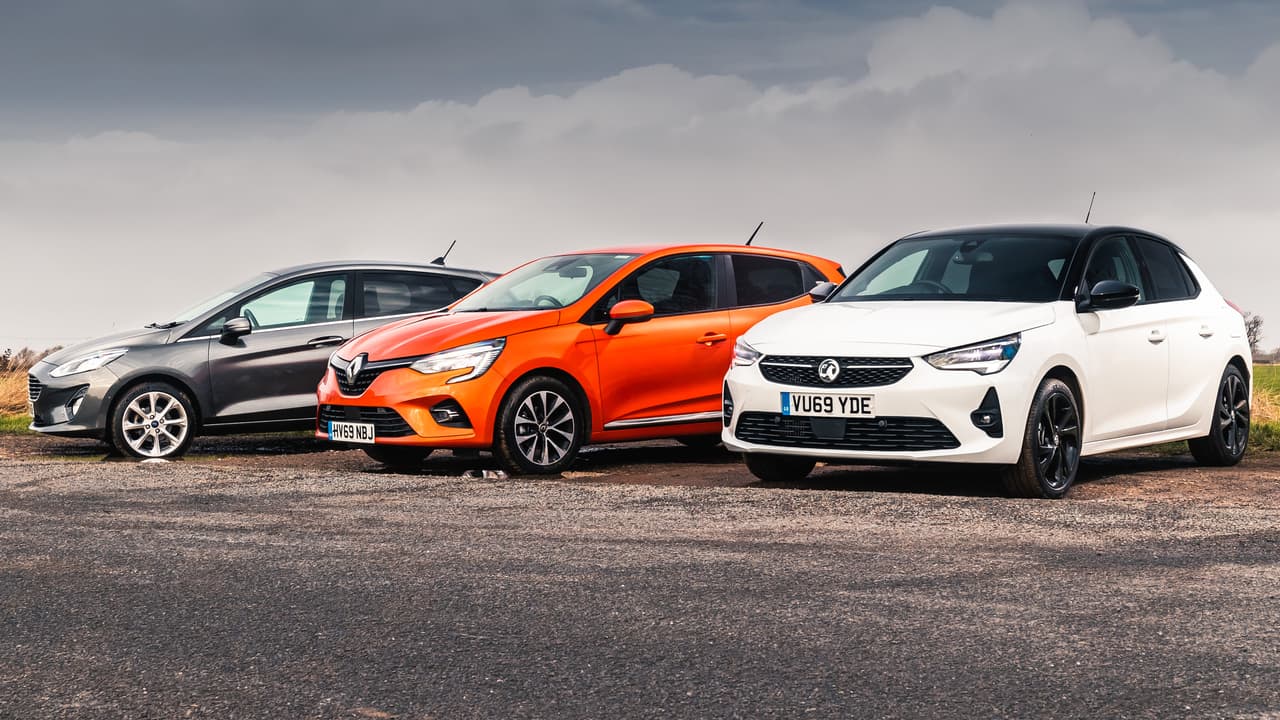