Dodge's unhinged, drag-racing ultra muscle car has landed. It will do actual wheelies...

Forget everything you have seen or heard about the new Dodge Challenger SRT Demon. It’s all just fluff compared with what we are exclusively about to tell you here. This car isn’t just a warmed over Hellcat, it’s a completely new standalone model which will shatter any thoughts you have about what a muscle car can do. 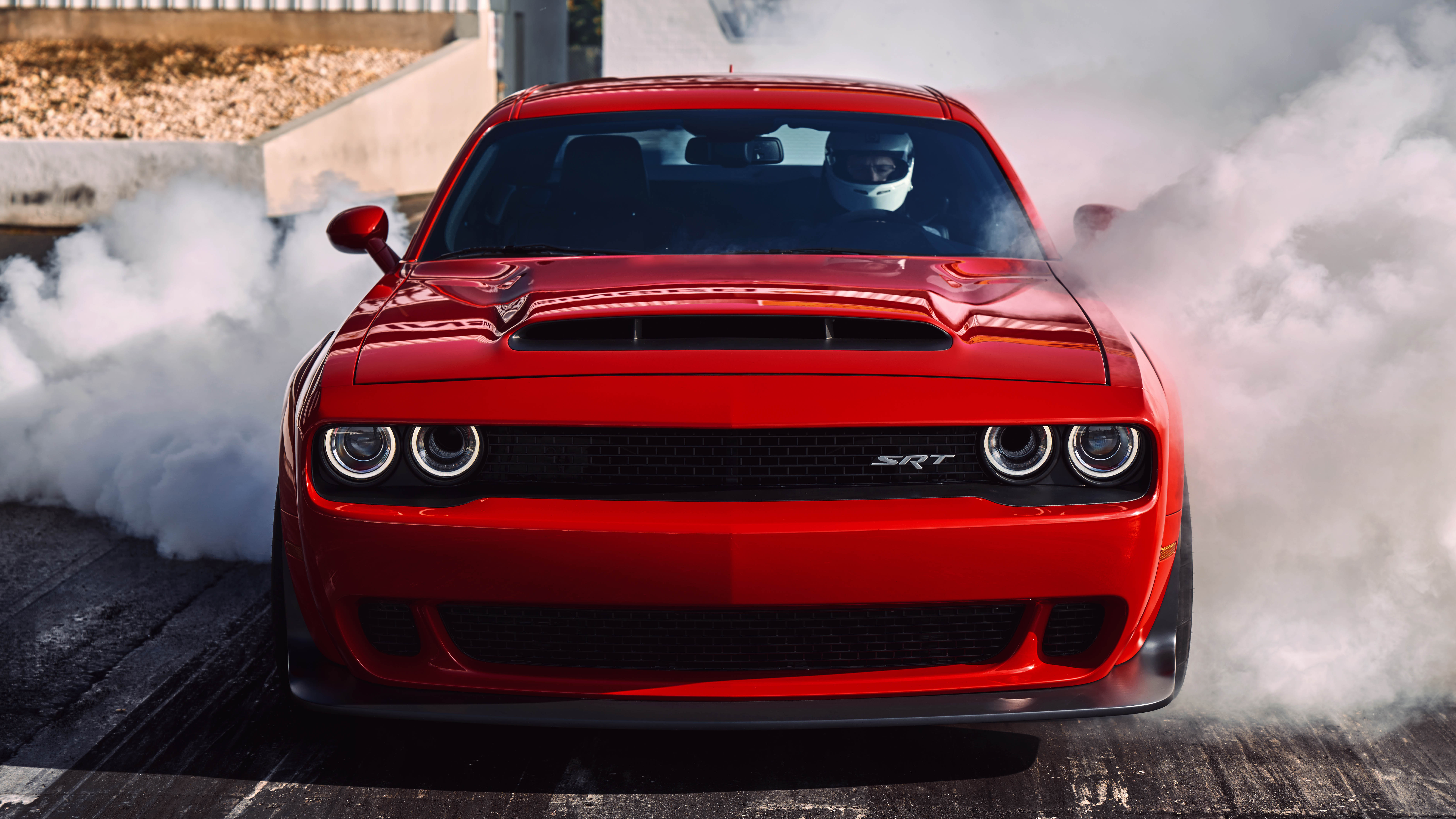 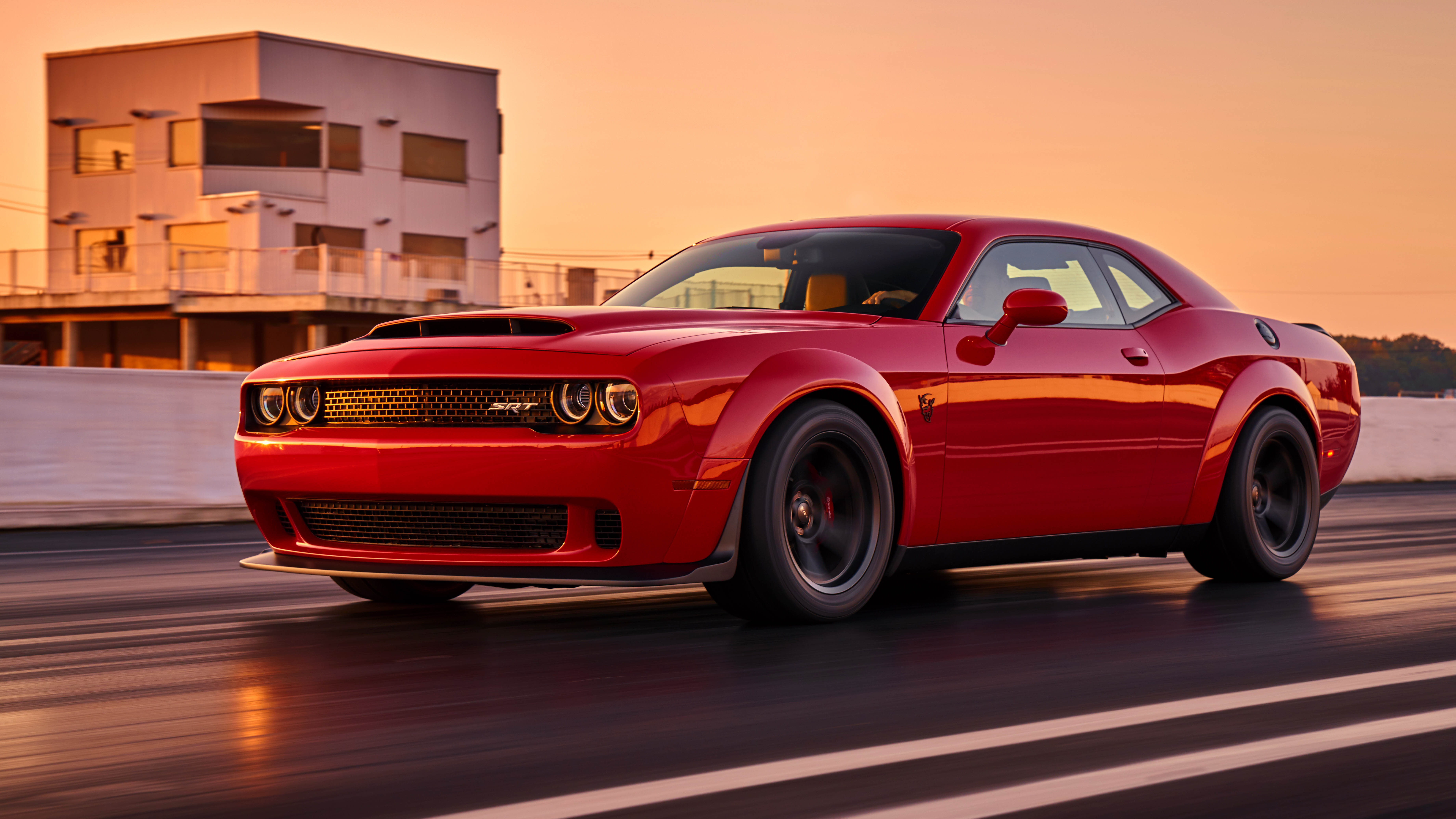 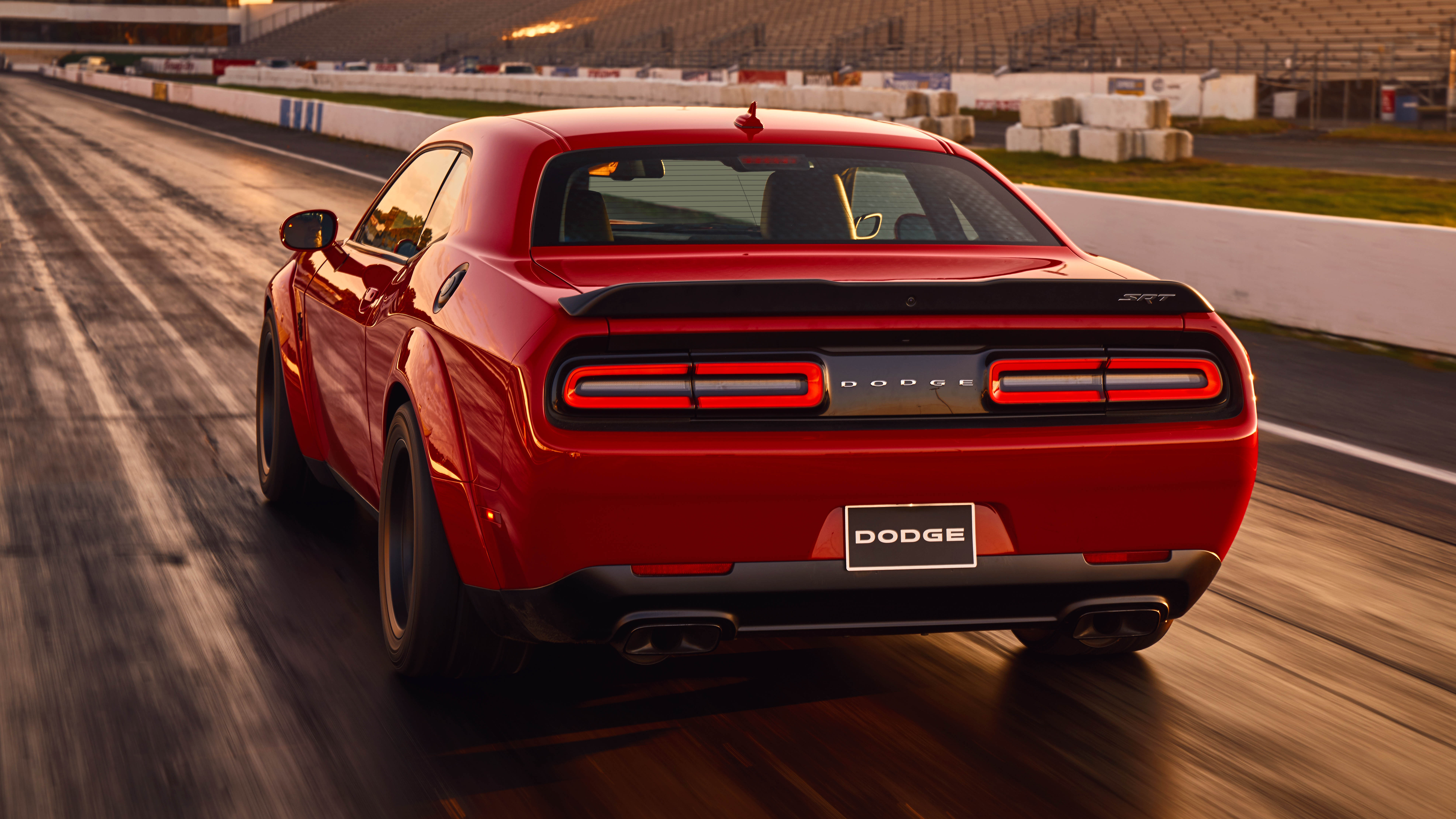 Don’t believe us? Try these for size. The new 2018 Dodge Demon is/has all of the following: 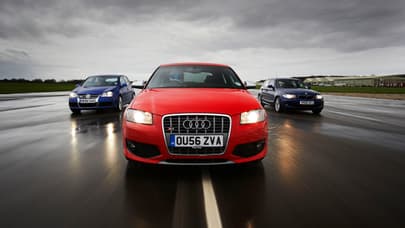 From the archives: Volkswagen Golf R32 vs Audi S3 vs BMW 130i

As mind-blowing as that little lot might be, it’s still a very long way from the end of the Demon story, of which there are many more chapters. But the big question is how Dodge managed to wring quite so much performance out of what is essentially a Challenger. The answer is: 97 new parts, the deletion of a several key components and some serious light-weighting.

Let’s start with the heart of the matter: the engine. Despite the fact that they are both supercharged V8s, the only similarity between the Hellcat’s and the Demon’s powerplants are the heads. Everything else on the Demon is new. And it needs to be as it’s carrying a lot more load.

While the Hellcat peaks at 707bhp and 650lbft at 4,000rpm, the Demon – using 91 octane petrol – produces 808bhp and 717lbft. That’s a useful increase but still doesn’t explain those performance numbers. So this is a good time to tell you about the VIN-matched, owner-named Demon race kit, which will be available for each of the 3,000 or so Demons that go down the production line.

When you buy your car, you will be given a coupon. Don’t throw this away. The coupon entitles you to buy the Demon race kit for the princely sum of $1. This kit, which comes in its own bespoke crate, contains everything you need to turn your road Demon into a track Demon.

The car measures the petrol’s octane and, if it hits 100, resets all of the engine’s timing to make the most of it. In this beast mode, the Demon produces 840bhp and 770lbft

Among other things including a pair of smaller, lighter front wheels – as standard the car wears 315 section Nitto NT05R drag radials all round (another world first), effectively two sets of rears – plus a jack and an impact driver, the kit contains a controller which screws into the centre console. When fitted, this controller allows you to magically run your Demon on 100-octane race fuel, just by pressing a button.

The car measures the petrol’s octane and, if it hits 100, resets all of the engine’s timing to make the most of it. In this beast mode, the Demon produces 840bhp and 770lbft. And it keeps making that power almost irrespective of what the weather is doing thanks to an intake chiller system that actively sucks heat out of the engine and supercharger coolant, lowering the intake charge temp by 45degF.

The colder the air, the more dense it is, the more dense the air the more you can pack into the cylinders. More air equals a bigger bang, which equals more power. Simple, yet fiendishly complicated all at the same time. Fulfilling the ‘more air’ part of the equation are a pair – instead of the Hellcat’s single Air Catcher – of grille-mounted air intakes as per the Challenger T/A concept. Plus a vast bonnet-mounted air scoop – the biggest on any production car in the world, naturally.

All of which would be less effective if the Demon hadn’t lost some of the Hellcat’s weight. Which it has – it tips the scales a full 200lb (90.7kg) less than its little brother. But not through a myriad of near invisible tiny cuts throughout the car. No, the Demon’s not that sort of vehicle. 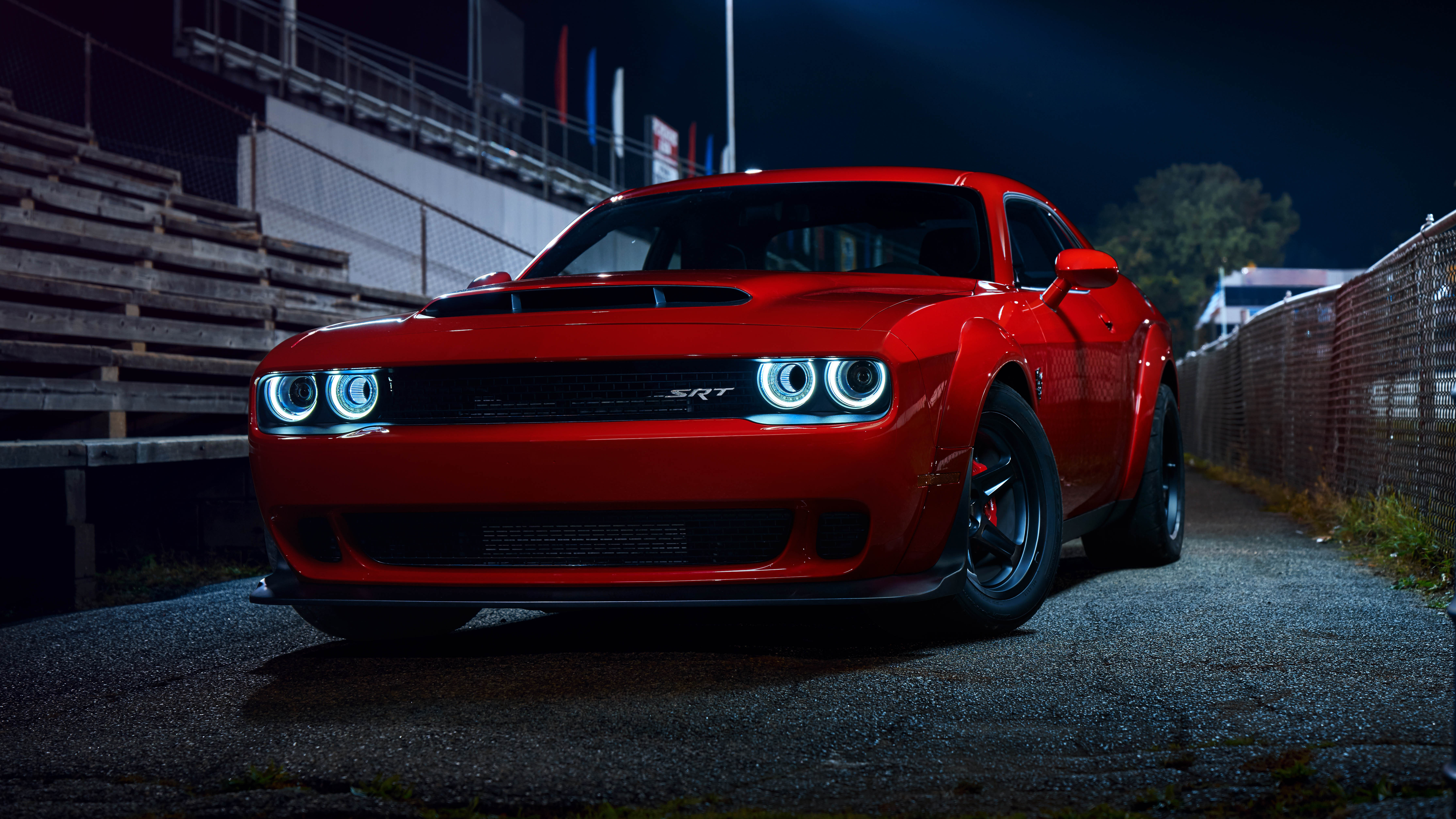 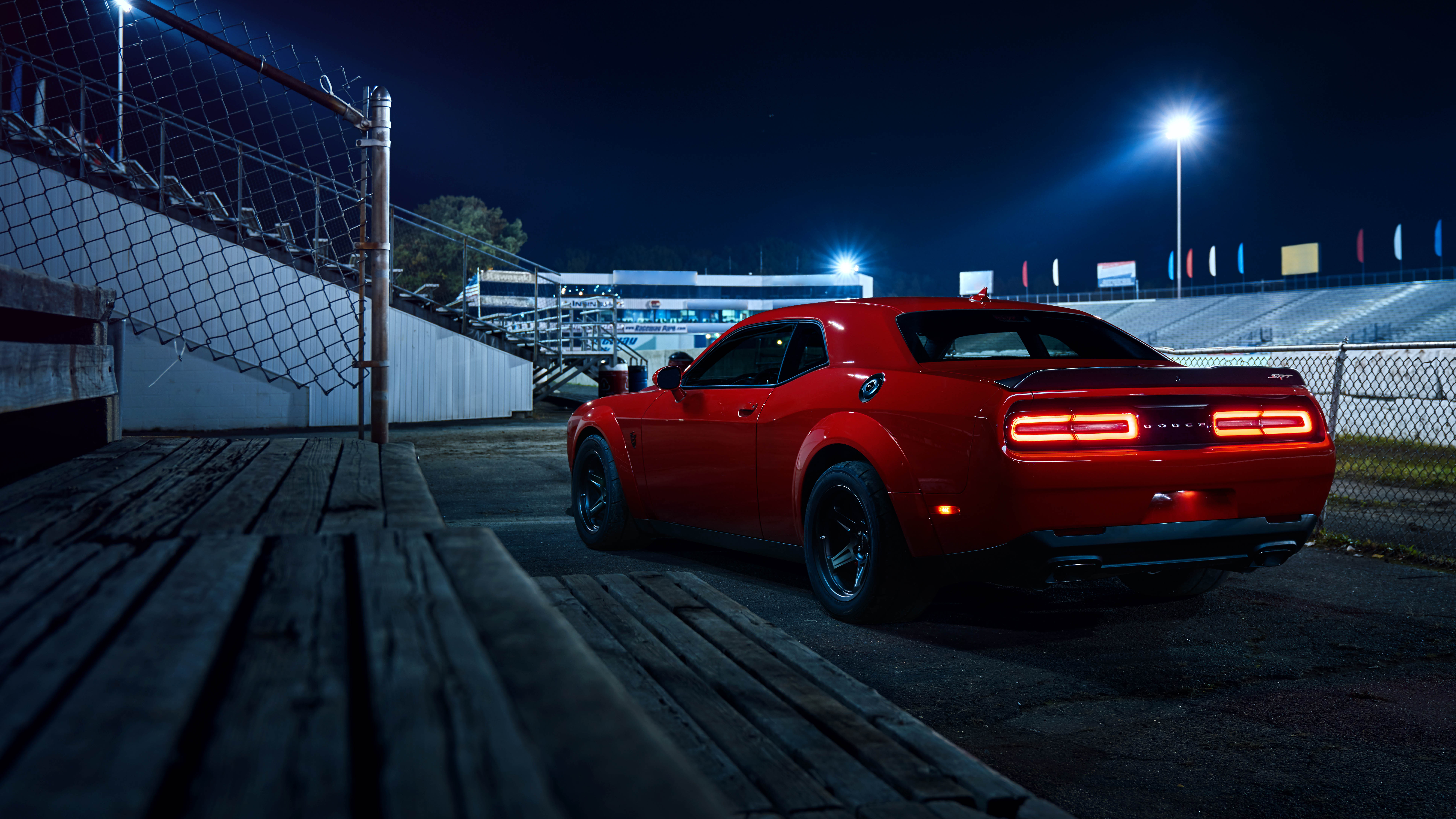 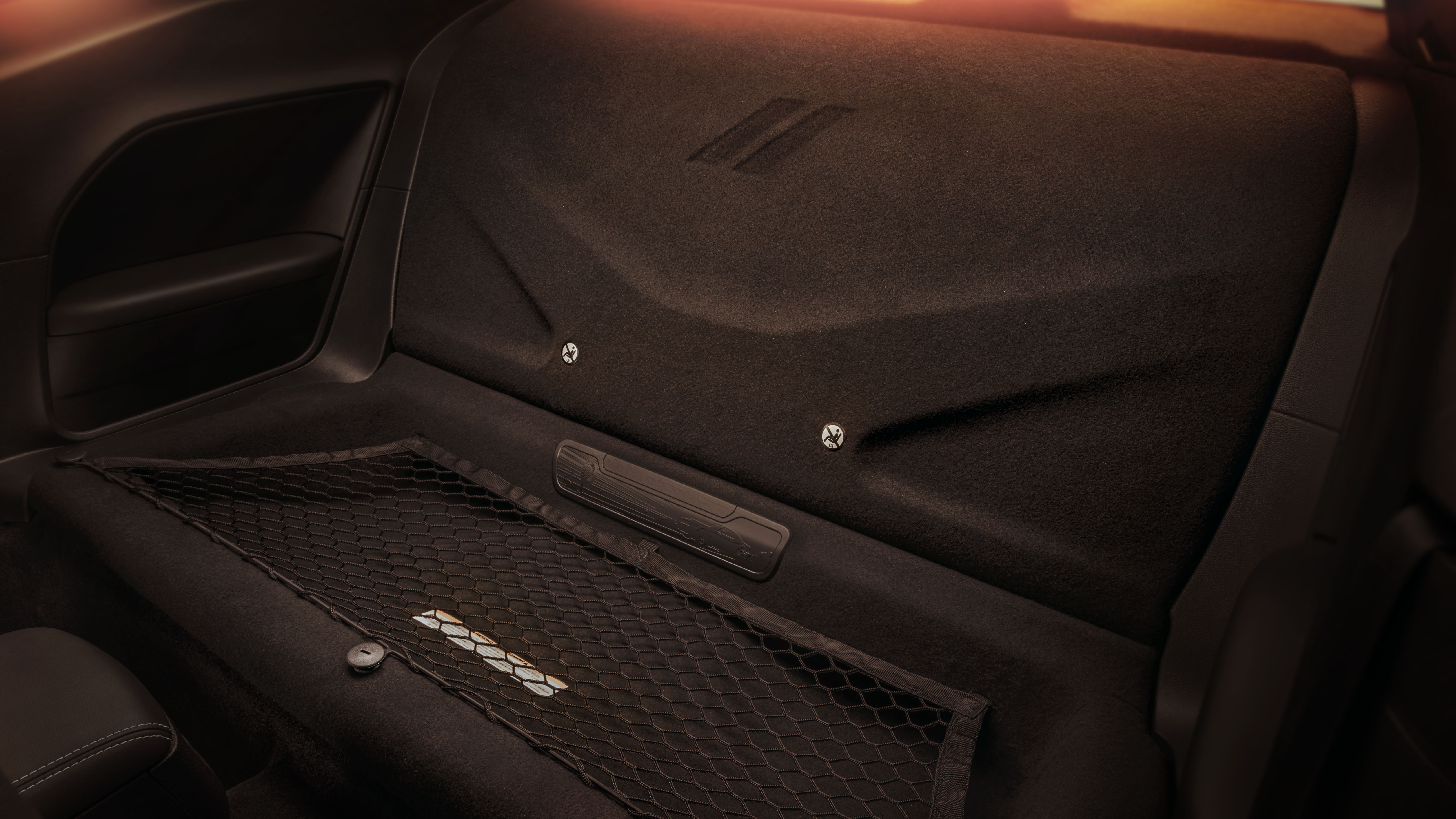 To save weight it comes as standard with just one seat, the driver’s. If you want the passenger seat you can have it added in for just $1. And if you insist on the rear seat, that’ll cost you, yes, another $1. But if you don’t tick those boxes, you will be driving on your own. How brilliant is that?

Other weight-loss measures include a new steering rack, smaller brakes, less NVH deadening material, lighter wheels, stereo, no spare wheel and a few other odds and ends that you really won’t notice. Because you’ll be having far too much fun launching this thing off the line. An activity the Demon, as we can see, is quite good at thanks to some more tech downstream of that furious engine.

To the Demon’s list of world firsts for a production car you also have to add: the fitment of a transbrake. This drag racer staple – mounted as a paddle on the steering wheel here – effectively locks the gearbox so you can preload the drivetrain without the car pushing forward, as can happen when you have road roller-sized rears and skinny fronts. 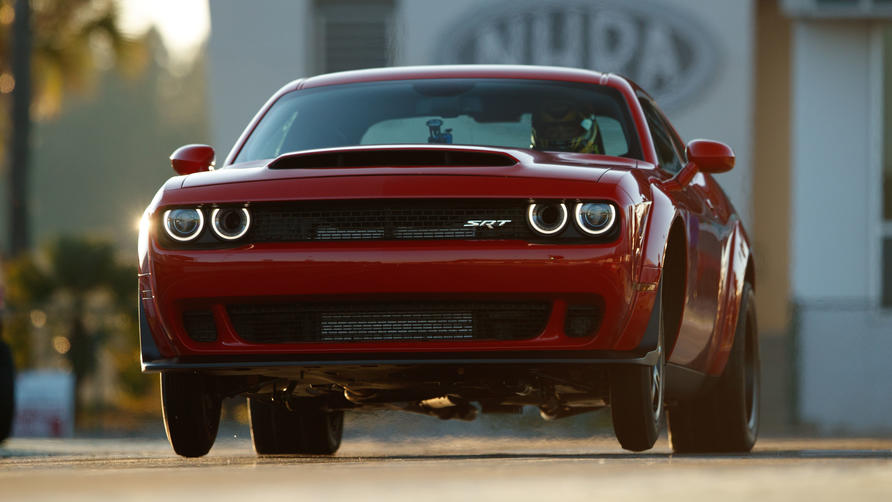 With this engaged and the throttle mashed, you just stage up, wait for the green then ping off the transbrake and away you go, wheelie-ing off into the distance as 530lbft and 8lb of boost hit immediately. Making sure you make it to the end of the strip, downstream of the gearbox and transbrake are a massively stronger drive shaft and lower 3.09 rear gears instead of the Hellcat’s 2.62. So it’s been built to handle all the extra stresses.

But don’t think the Demon is a straight-line only car. Far from it. Using adjustable dampers – which loosen the front and firm the rear when in launch mode – the Demon can handle spirited road driving just as well – if not better – than any other Challenger.

Top speed is limited to 168mph due to the drag radials, so it loses a little top end. But it registered the highest lateral G loads of any Challenger ever tested during the cornering tests. And it brakes faster from 60mph – when running all four 315s – to zero than a Viper ACR. So don’t underestimate it anywhere.

There are thousands more Demon details and stories we can dig into later. But the burning question right now is: when are we going to get to drive it?  Dodge is saying sometime around July.

We have the whole month blocked out already... 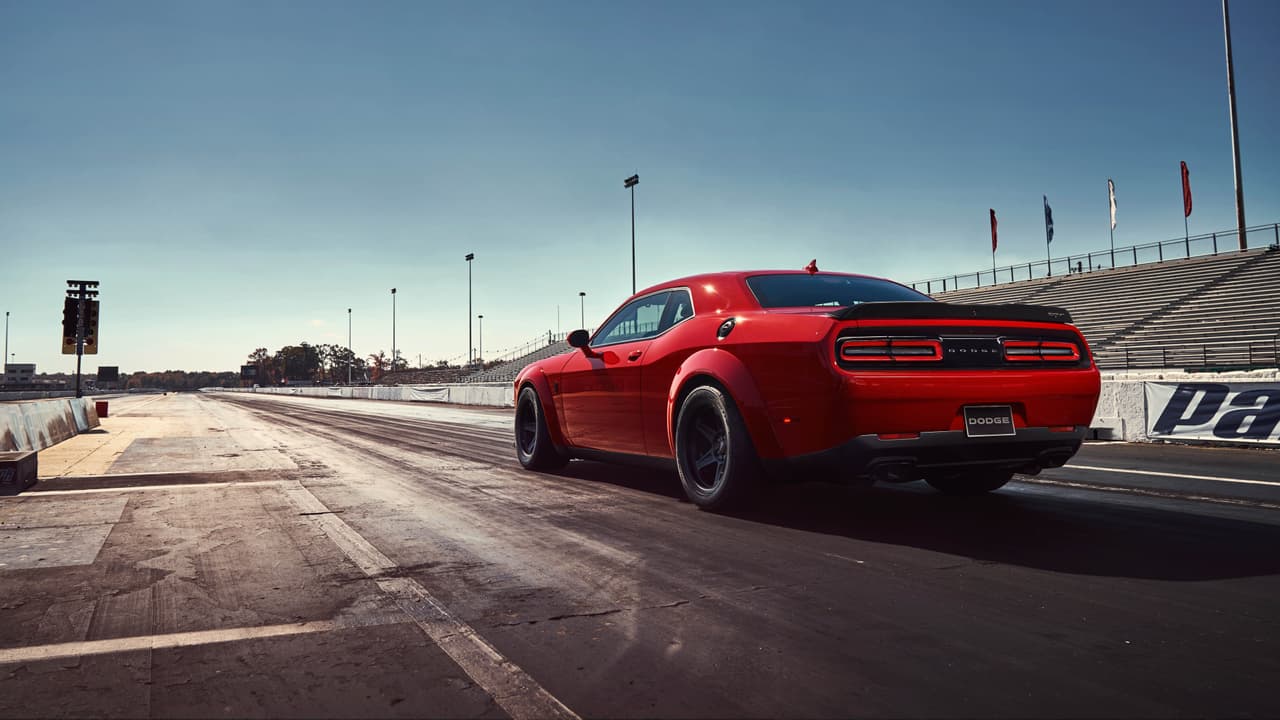