How hardcore is the Jaguar Project 8? This is the boast, of course: the fastest saloon around the Nürburgring, benchmarked against a Porsche 911 GT3, the most powerful Jag ever. Carbon-ceramic this, track-pack that, downforced, rollcaged and harnessed; £150k of 1-of-300 uniqueness.

How hardcore? We’ll answer that, but it leads on to a more relevant question: why? Why would you want a sports car shaped like a saloon? Why not, y’know, just have a sports car?

For the time being let’s cut Jaguar some slack – most super-saloons these days are akin to sports cars, so if Jag has taken it one step beyond an M3 CS, we’re in compelling territory. Famously, BMW developed the M3 to drive identically to an M4 coupe. It then offered its four-door with the same upgrade options, first a Competition pack, then this CS version. If we’re honest, the latter isn’t great value: a bit more power, a tweak to the suspension, more carbon, a 100-strong run in the UK and an £86k bill. Still, reasonably bespoke and little more than half what Jag’s charging. 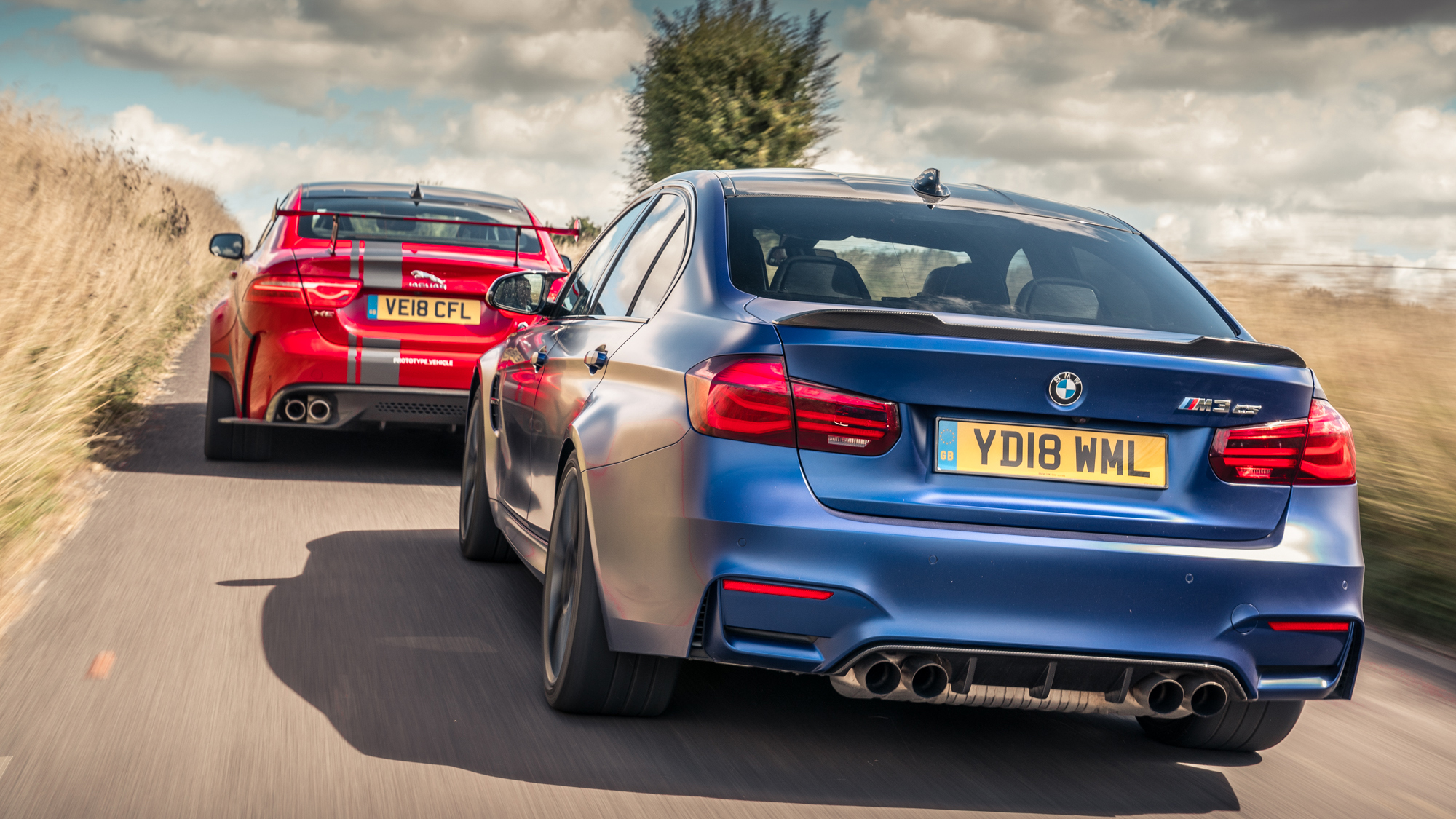 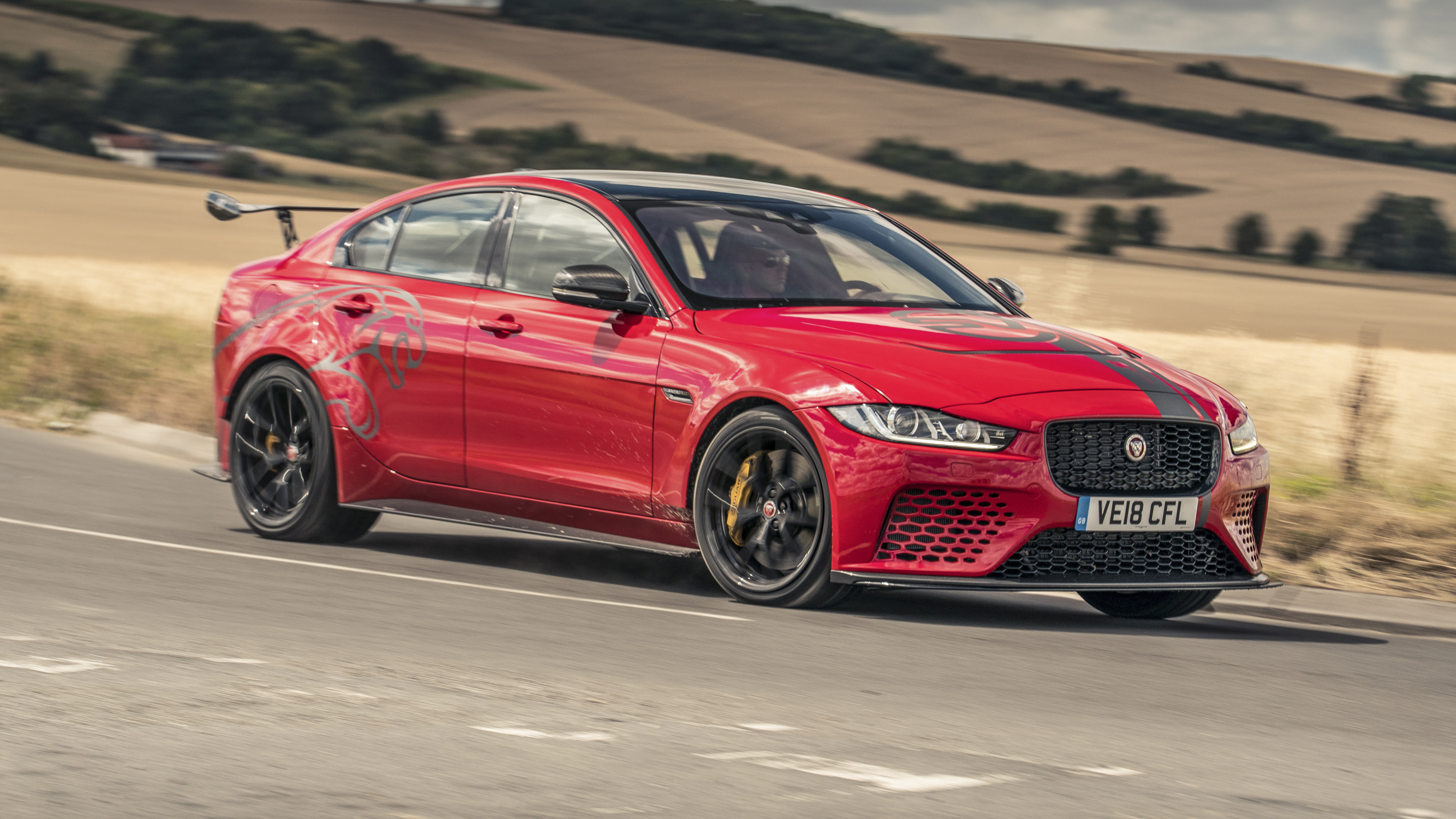 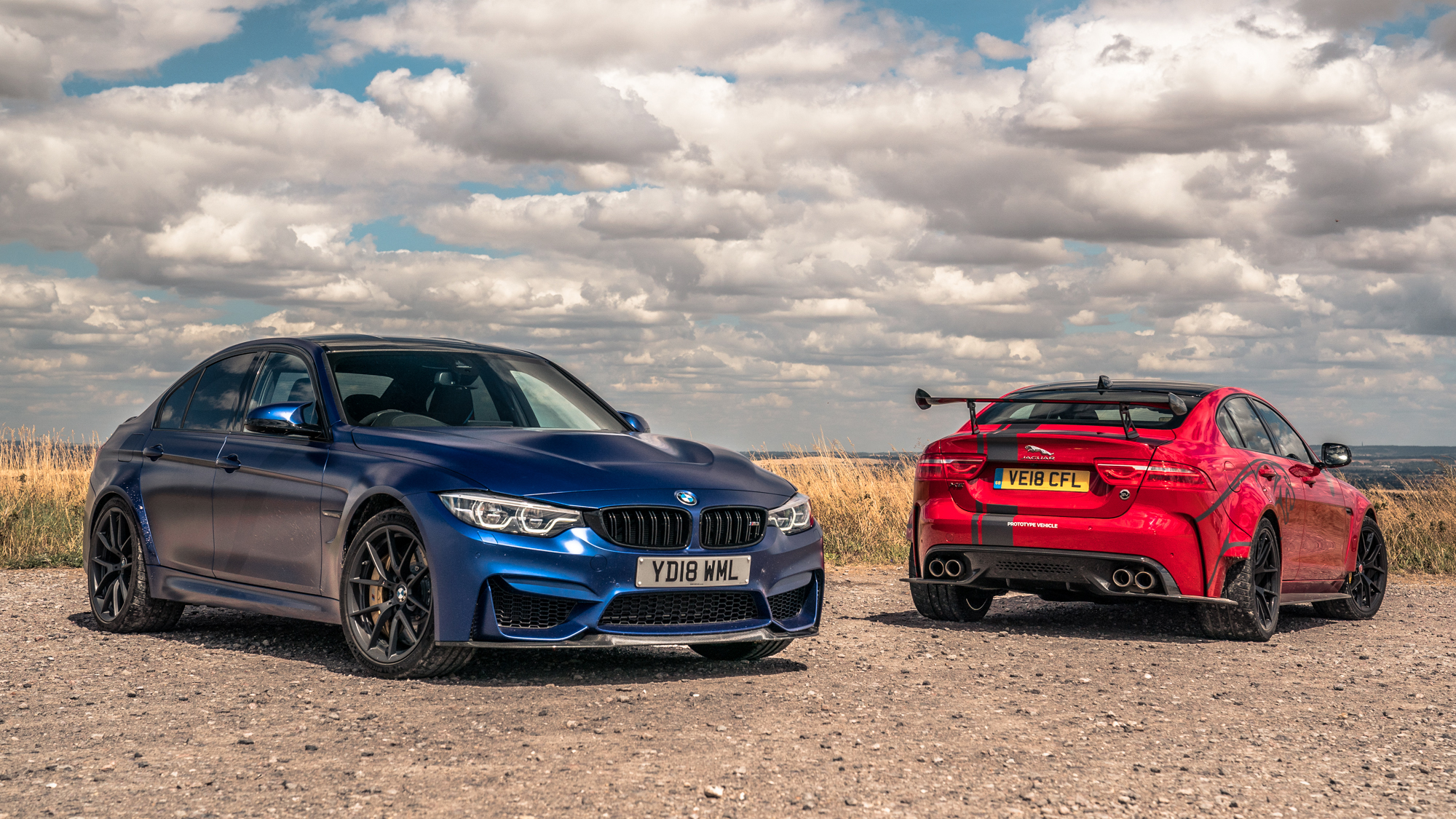 But just look at the Project 8. Those haunches, specifically. The cut-outs behind the rear wheels, the daft graphics, the oddly perforated front end. And inside, too. You can have it as a four-seater – probably should if you’re busily persuading your other half this can be a family car – but a cage, harness and extinguisher do paint a picture, don’t they?

It’s the unseen story that’s perhaps more telling, though – option the cage and you increase torsional rigidity by 27 per cent. Which means the standard Project 8 is a relatively wobbly thing, and the best compromise might involve strapping your kids to the rollcage. But wobbly is a relative term. The suspension uprights are new, as are the springs, dampers, bushes, wheel bearings and anti-roll bar.

Let’s start by driving the M3 CS, because that way we’re benchmarking against a known quantity. It’s a good size, not too wide, easy to see out of, embracing seats with cut-outs to aid body cooling, and the only negative inside is the clumsily fat steering wheel. I love the matt-blue paint, too, and the CS’s shapely bonnet, even if what’s underneath is broadly familiar, and rather short of raw power in this context: the twin-turbo straight-six falls 138bhp and 74lb ft short of its supercharged rival. But 1,745kg of Project 8 suggests Jaguar’s first focus wasn’t on weight reduction, and reflects badly against 1,585kg of M3. 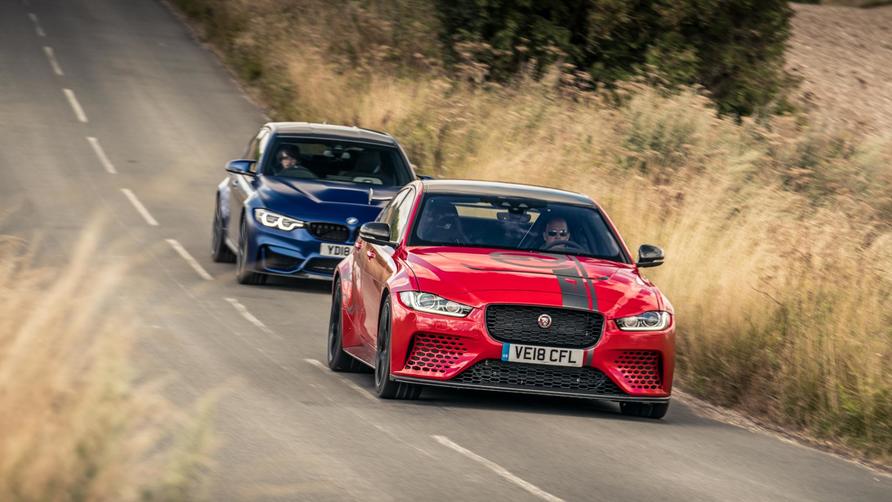 Once you have the BMW beyond 4,000rpm and in Sport Plus, it feels indecently fast, quite the wild ride, in fact. To the extent that the last thing you find yourself thinking is: “Hmm, this could really do with another 138bhp”. You sense the chassis bunching up, tensing as the rear wheels attempt to compress the wheelbase, but with no release that way, the electronic differential gets over-excited, and the torque finds a way out by splaying the rear end wide. If you have the stability control off, that is. M Dynamic mode allows modest measures of panicky adrenaline, before stepping in to save your blushes.

The reason this happens is there’s not enough compliance in the suspension. There’s some side-to-side jiggle, as if the M3 is driving over hot coals, and the harder you make the dampers, the hotter those coals become. It gets twitchier and spikier the harder you go, asks quite a lot of you. I enjoy this challenge, I like the fact that no matter how smoothly I try to drive, there’s always an edginess to the M3’s behaviour.

It does have a tremendous front end (not least because it’s the one axle you can trust). The steering is positive and precise, and turn-in grip is strong. Just be warned that small deflections through the suspension do kick back through the steering, giving the sense that the car is writhing on bumpy roads – as well as dancing on those hot coals. Never a dull moment.

Who’d have thought the Jaguar would be the more settled and composed? The less challenging to drive? It doesn’t feel that way on first impressions. You twig the looks, harness in, fire up the bellowing V8 and rumble off down the road. The harness anchor points jangle against the roll cage, the throttle looks for any excuse to come at you, the suspension... well, Comfort in the Project 8 is a bit like Sport Plus in the BMW – not in terms of stiffness, but because that’s the mode in which it feels least content.

So don’t be shy, ramp up through the settings, take a deep breath, brace yourself, tickle the throttle and… discover the Project 8 is mesmerisingly good. It really is.

Success
Skip 14 photos in the image carousel and continue reading 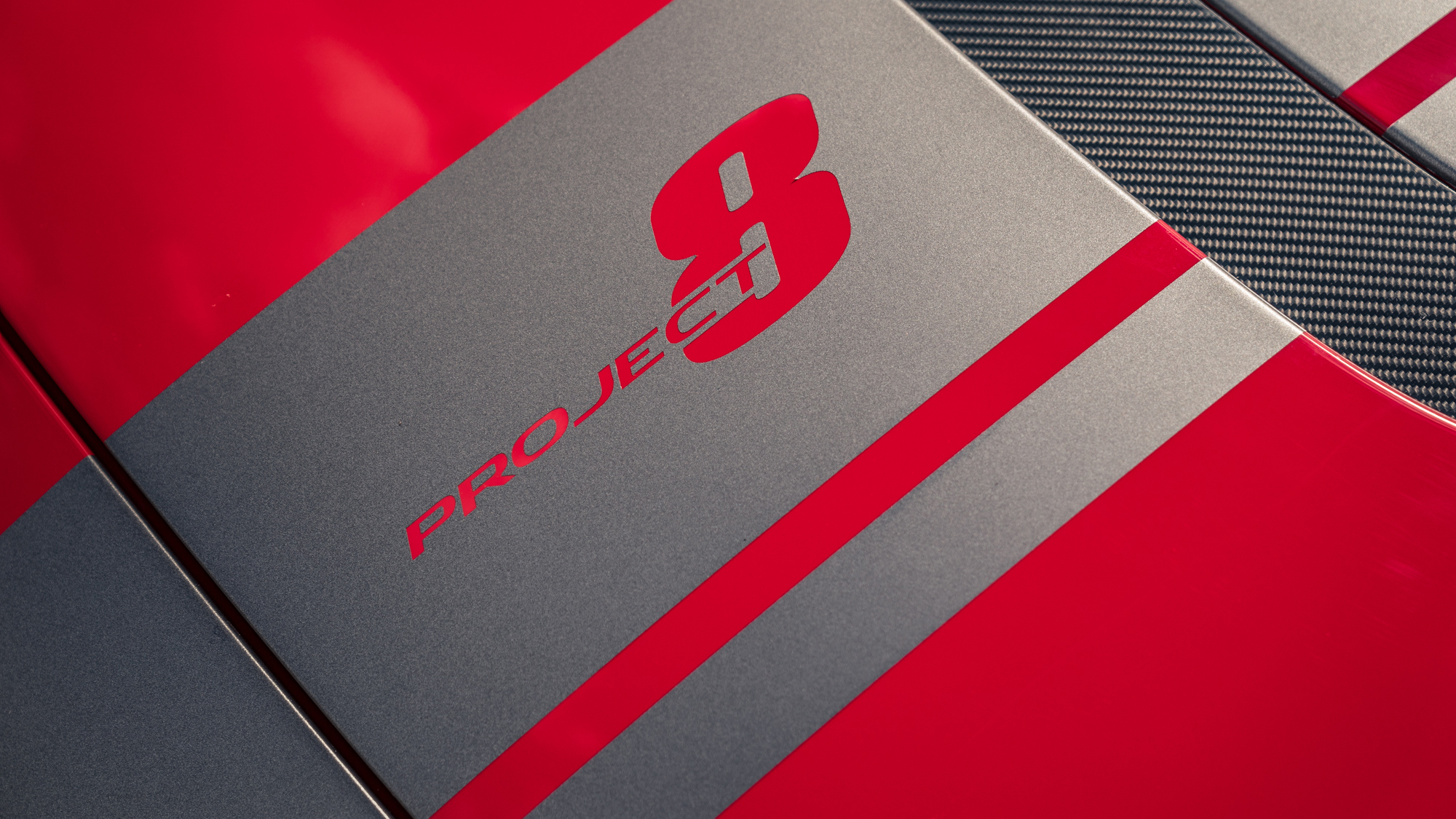 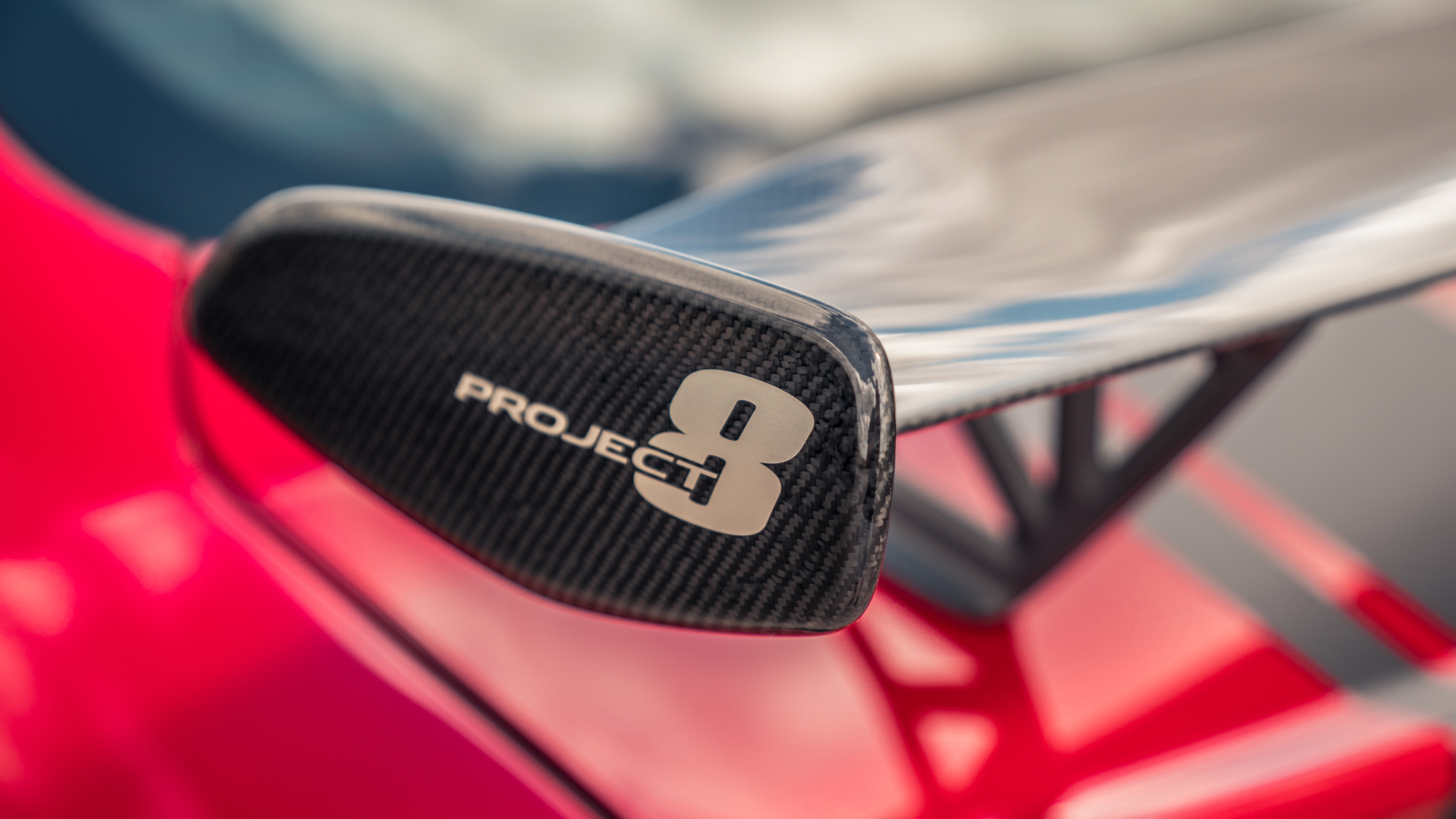 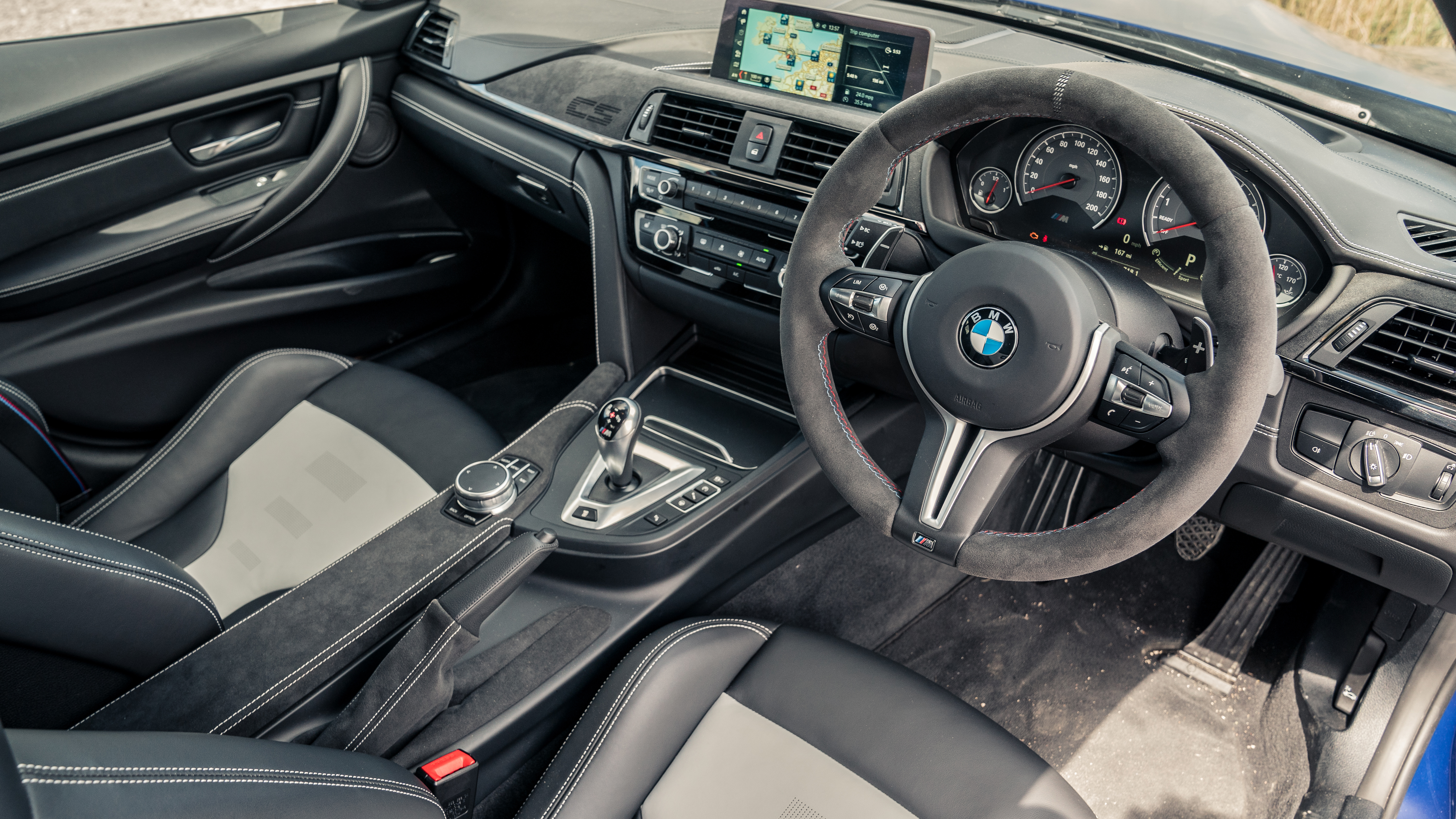 It flows, works both ends evenly and smoothly, shuffles power between the axles intuitively. There’s a oneness to the way it moves down the road where in the BMW I had to employ every trick in the book to make it behave even approximately as sinuously.

But don’t mistake this for softness. What we have here is careful honing and total control. You need this when there’s close on 600bhp packed into a compact saloon bodyshell. The supercharger is going out of fashion, but here’s two reasons for it to stay popular: instant throttle response and colossal torque. Off it goes at 2,500rpm, seeming to pack more acceleration into each rev gained than you’d have thought possible, accompanied by bellow and shriek.

Jaguar could have made the gearing shorter. I mean there’s no need, but I can’t help imagining just how much punchier it would have felt. There are genuine issues too, the most troublesome of which is the steering. It makes the whole front end feel numb compared to the lively M3. Instead it’s the suspension that delivers the information – it comes through your backside instead of your hands and means you don’t have all the detail you’d like as you turn into a corner. The eight-speed auto isn’t as immediate as the BMW’s twin clutcher, either.

What surprised me most was the sheer capability of the Jaguar. Its polished manners at low speed, the quiet cruising. It made me wonder how Jaguar thinks it will be used by owners. As a daily? It’d do the job. It also made me wonder what it was for: to create a halo, to showcase the ability of engineers, to attract publicity?

All are valid, and besides, Jaguar’s Special Vehicle Operations (SVO) department likes rare-groove. Electric E-Type, V8 Defender, racing I-Pace eTrophy, Project Seven roadster. That’s an eclectic (some might say sacrilegious) line-up. This is just one more to add to the list. So good news: I can’t think of another saloon I’d rather drive down a good road. Now, time for the track. 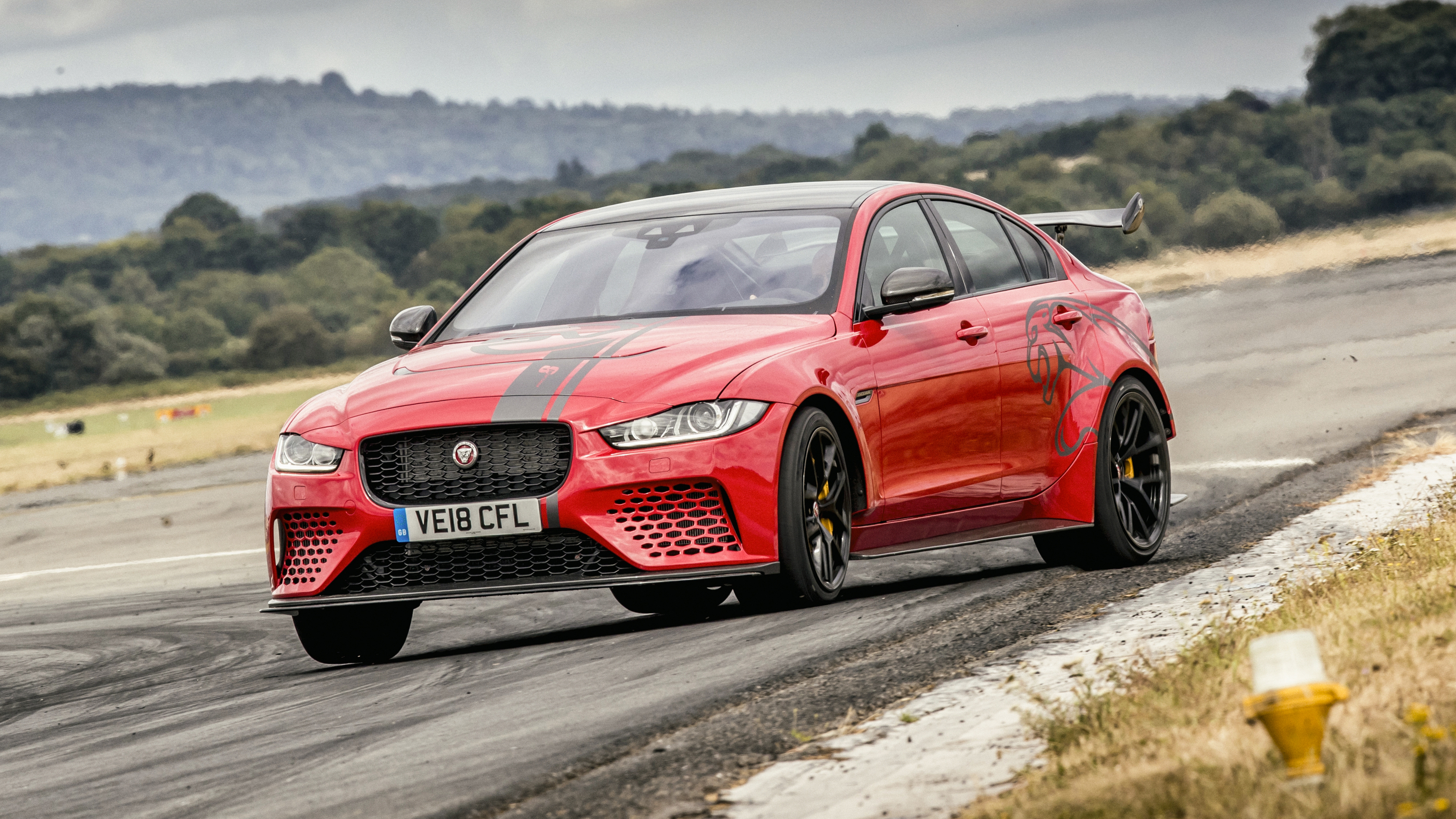 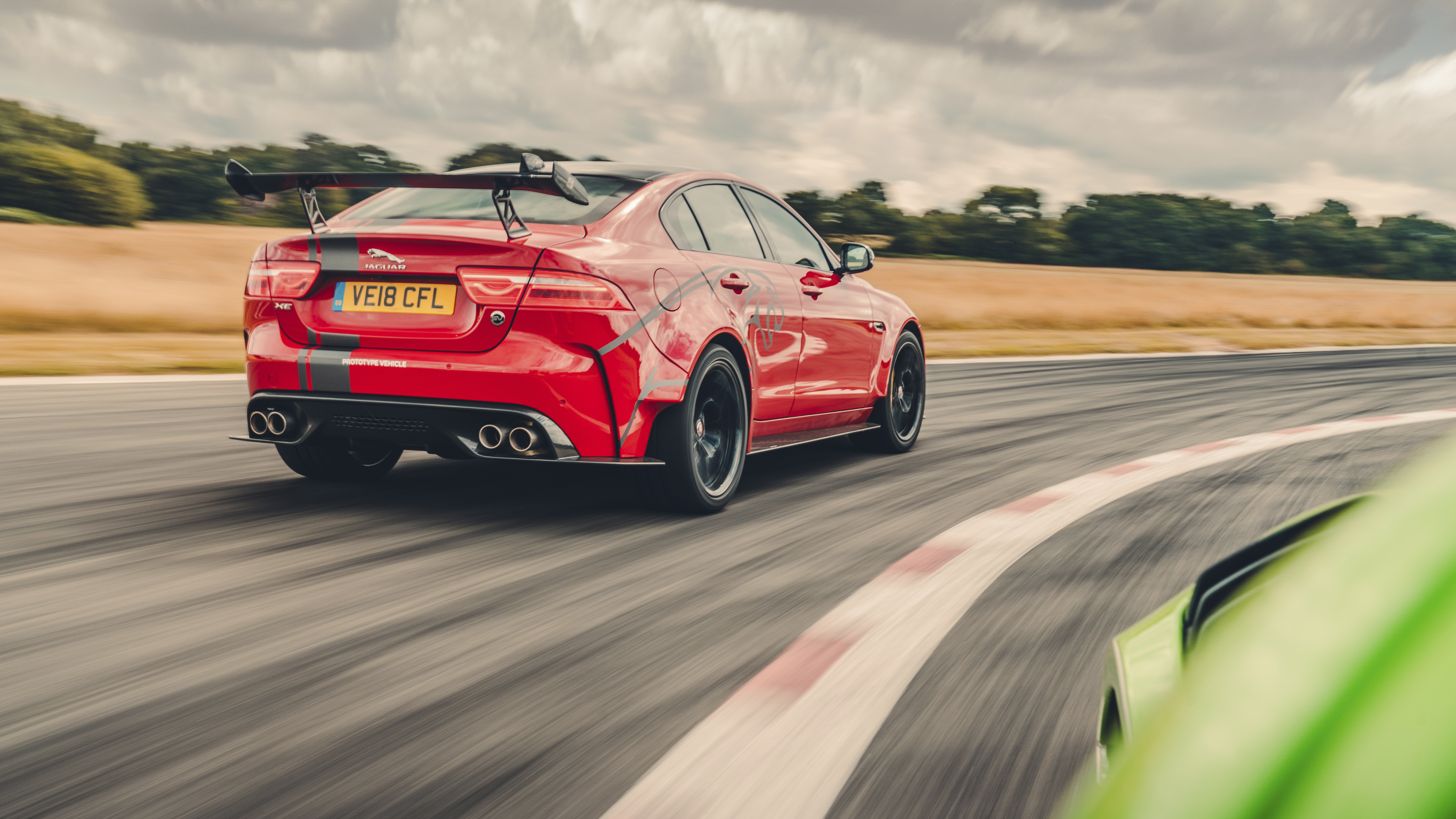 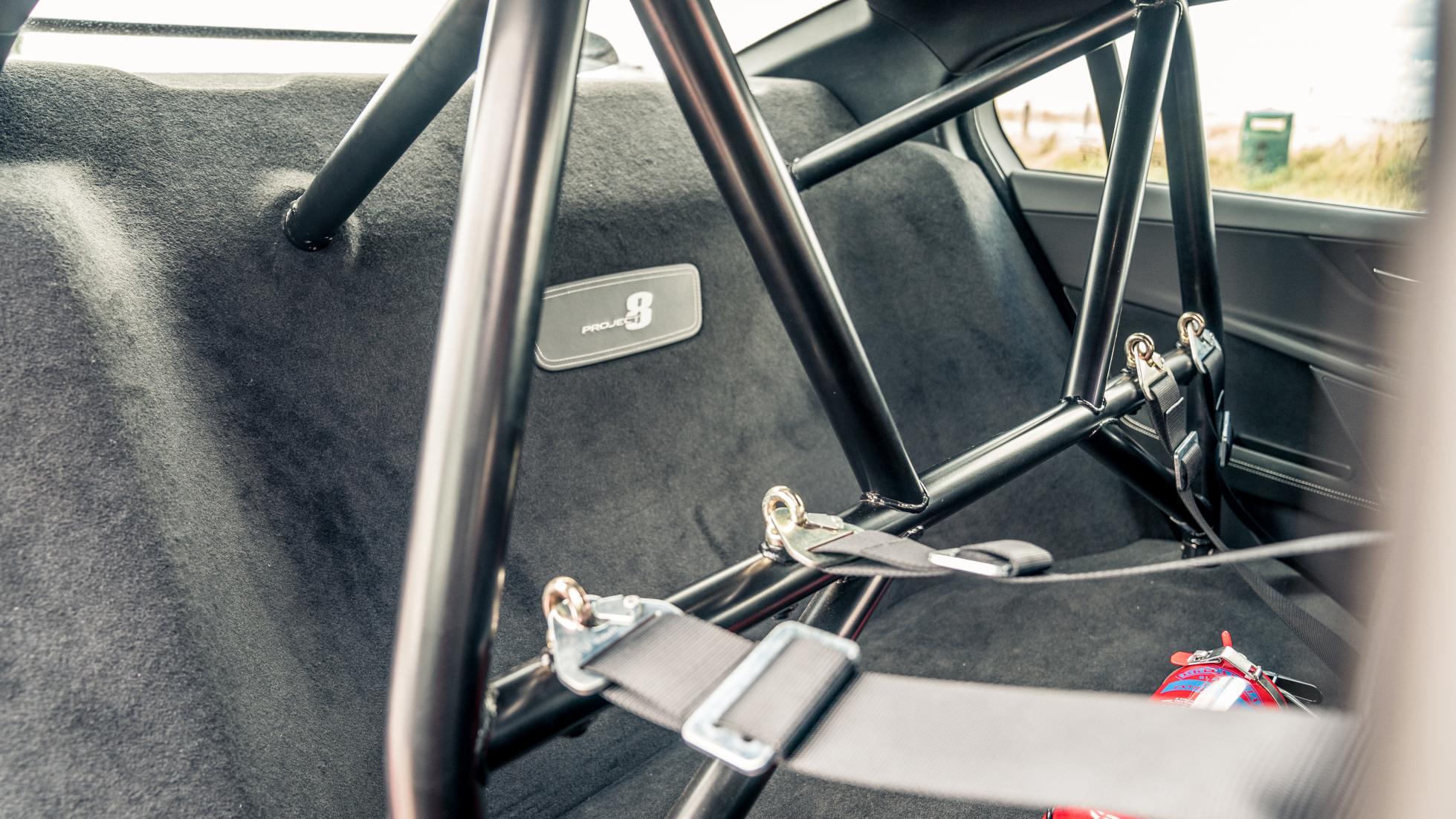 Bad news: I can think of other cars I’d rather take to a track. Jaguar may claim to have benchmarked the Project 8 against the Porsche 911 GT3, and, sure enough, it’s not a lot slower around the Nürburgring (7:21.2 plays 7:12.7), but that’s not the whole story.

The Jaguar is taller and significantly heavier, so struggles to contain its weight (although it probably didn't help that we failed to get the spanners out and drop the car by the 15mm the suspension permits). The Michelin Cup 2 tyres do an immense job of resisting the forces working on them, but eventually the hard-worked outside front can’t hold a line any more. Up to that point though, it’s very good. I particularly like the smooth way that, when you nail it out of a slow corner, the back end slips out into oversteer and then the 4WD system cuts in, transferring power forward so you exit with everything in line and pointing the right way. It’s flattering like that. Around Dunsfold, suspension control is never found wanting.

But compared to a GT3 it’s not sharp. There’s the numb steering, the weight management, the eventual loss of grip, even the engine. It’s trickier to mete out the exact amount of thrust you want when the engine just wants to give you everything, all the time. Throttle response may be great, but what it’s connected to is a happy, generous V8, not a laser-focused, 9,000rpm flat-six. There’s rarely much need to hold on until 6,800rpm as the gains in noise and power aren’t that noticeable.

The brakes are impressive, and it’s great not having to brace yourself, instead letting the harness take the strain of your bodyweight. Personally I’d like a firmer pedal and less servo to heighten the motorsport credentials.

The sum of it is that the Project 8 is a better road car than a track car. Surprised? So was I. This was a car I anticipated would be the fiercest of the fierce, the hardest of the hardcore, but actually it’s warm and approachable. Not particularly challenging. So a very good fit for an audience who probably aren’t trackday regulars. Most importantly, it shows Jaguar can still build a great driver’s car. 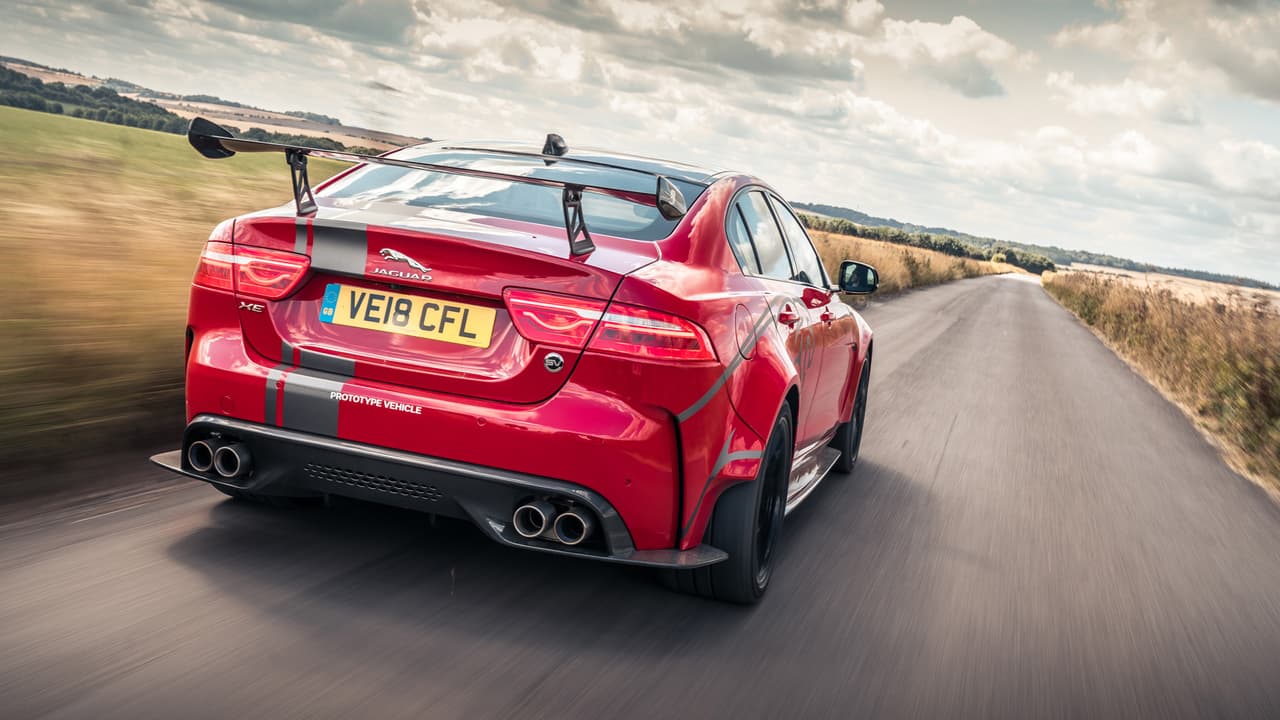