How do you improve one of the best luxury cars of all time? More of the same, but better

When you are the self-styled builder of the best car in the world, you tend to attract a certain clientele. Although Rolls-Royce has discreetly reversed away from that particular boast – more of an albatross than a job description – the task of replacing the Phantom isn’t for the faint-hearted. This isn’t just its flagship model, it’s also the car with which the BMW Group announced the brand’s gigantic reboot at one minute past midnight on 1 January 2003. They even called it “the last great automotive adventure”. Follow that, eh...

Well, here’s the answer. “Every one of our customers – connoisseurs of luxury in the extreme – was asking me for something more individual to them, not less,” Rolls-Royce CEO Torsten Müller-Ötvös says. “I was adamant that’s what they should have.” 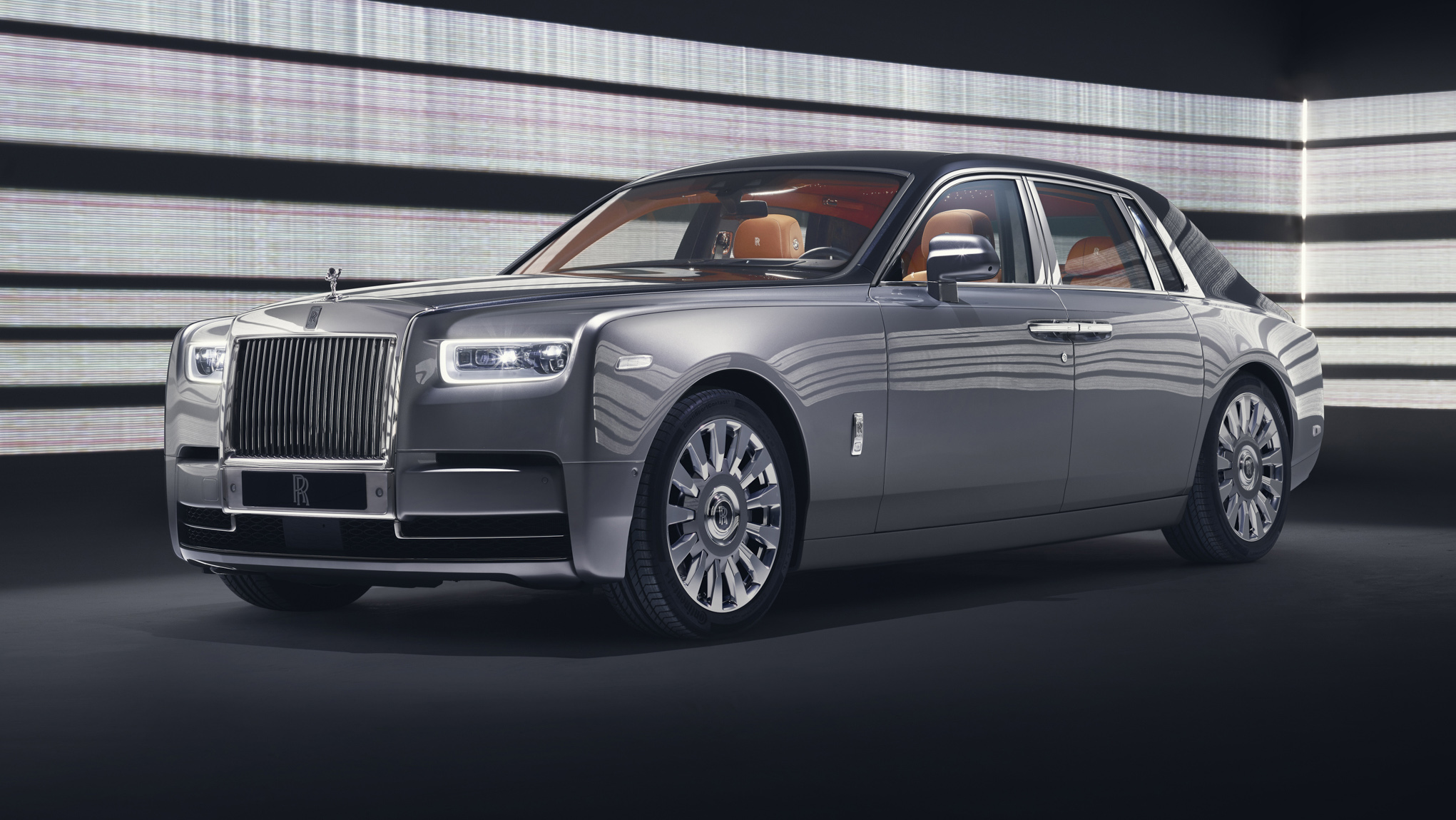 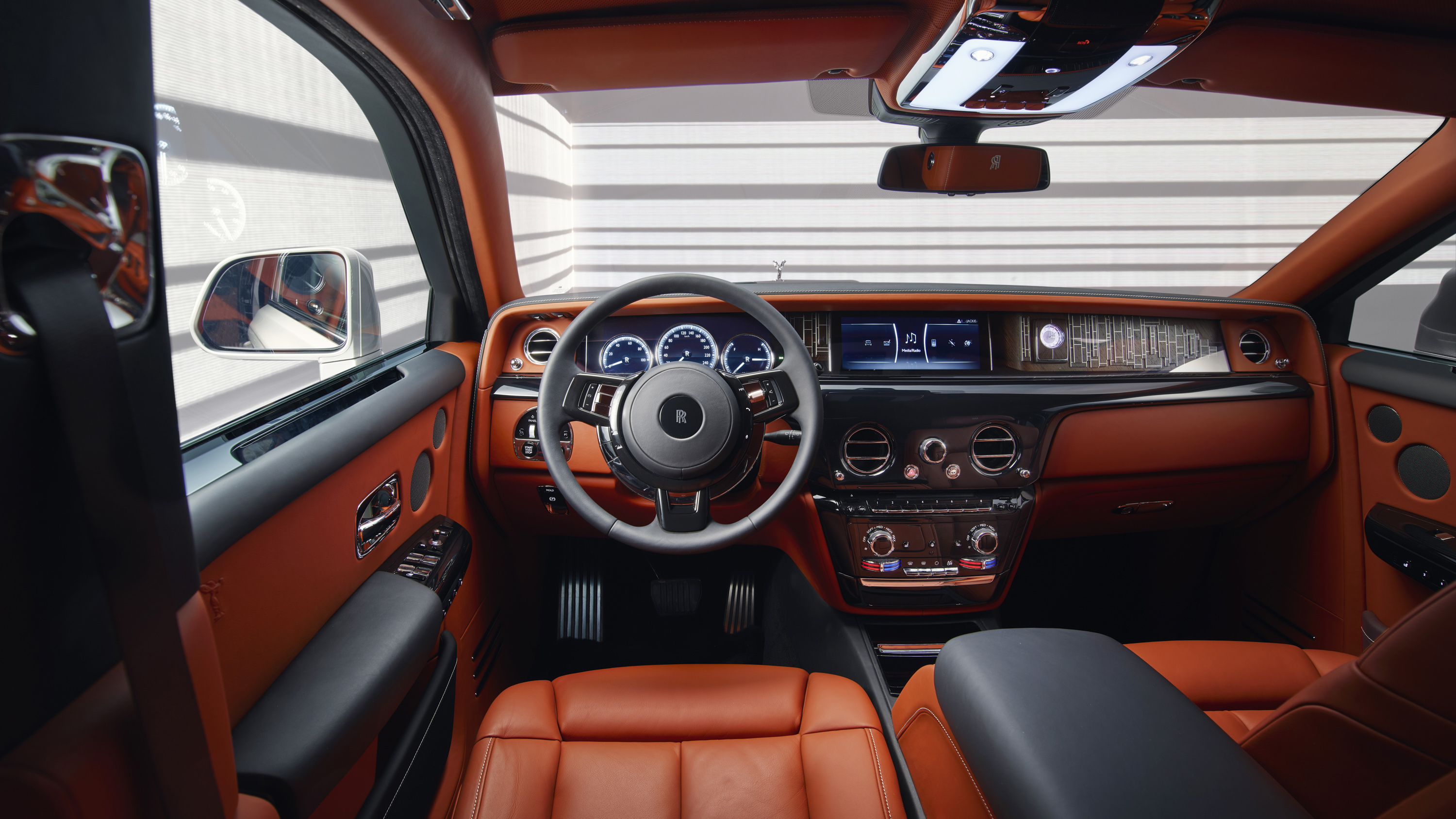 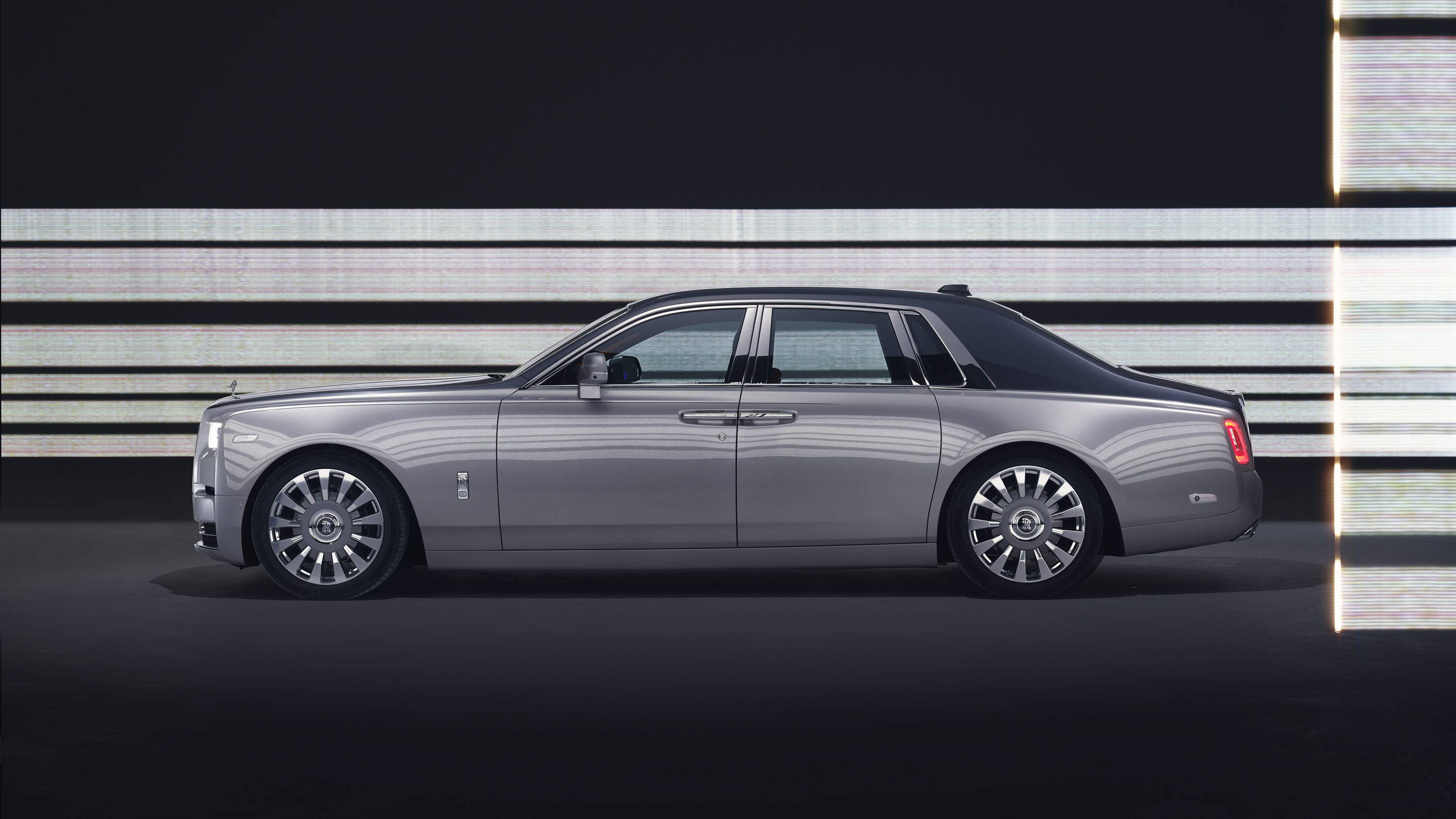 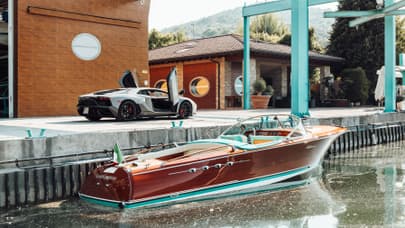 Important changes have taken place at this end of the market, and the renaissance in the bespoke idea that birthed Rolls a century ago is just one of them. The first time I ever heard the phrase “ultra-high-net-worth individuals”, it was uttered by a Rolls spokesman describing the target customer at launch. Back then, an UHNWI had disposable assets of approximately £10m. Despite the, er, hiccup in 2008, the rich appear to have become richer in the interim, and £25m is now the approximate cost of entry. This is merely the coinage that falls down the back of the UHNWI sofa. The Phantom is a car for people who employ other people to invest $500m in modern art alone, or buy property. London, for example.

So Rolls, despite what you might think at first glance, has gone back to the drawing board, both within and without. First, the bits you can’t see. The Phantom VIII is underpinned by an all-new aluminium spaceframe, which its creators loftily call “the architecture of luxury”. While not exactly modular in the usual sense of the word, this platform (oh dear, how proletarian) will provide the basis for all future Rolls products, including the long-anticipated Cullinan SUV, but also crucially frees up the engineers and creatives to really explore the bespoke avenues Müller-Ötvös desires. The mind boggles, almost as rapidly as the wallet wilts. 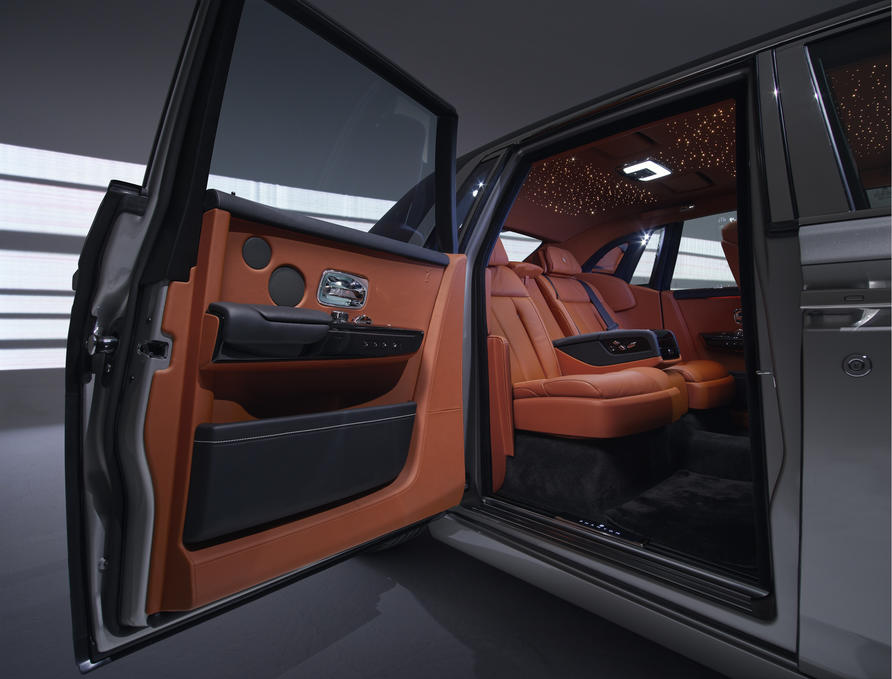 Although we haven’t got the full lowdown yet, this is a car that revels in statistical superlatives. In no particular order, then. Rolls claims the new spaceframe is 30 per cent more rigid than the previous model. The chassis gets an all-new suspension set-up, with a double wishbone configuration on the front, and a five-link axle at the rear. This is the latest car to benefit from four-wheel steering, with the emphasis here presumably on high-speed stability rather than low-speed agility. The new Phantom uses the latest-gen self-levelling air suspension, and as well as monitoring body and wheel acceleration and steering inputs, a stereo camera mounted in the windscreen reads the road ahead to effectively erase surface nasties before they’re allowed to upset occupant decorum.

Mercedes has been using a similar system for a while, but Rolls takes the obsession with refinement to a new level. There’s 6mm-thick, dual-layer double glazing all-round. The body-in-white features the largest-ever cast aluminium joints to enhance sound insulation, but just to be on the safe side, the car carries more than 130kg of sound-deadening material. There’s double-skin alloy within the floor and on the front bulkhead, into which a foam and felt layer is squished. There’s more insulating material in the headliner, doors, and boot cavity. Even the tyres have cavity sound insulation, and overall the new Phantom is 60dB quieter than the old one at 62mph. Quieter, even, than a pin dropping onto a mountain of feathers. So quiet, in fact, that Rolls’s acoustic engineer thought his instruments were on the blink at first.

Not even the engine is allowed to disturb the hush. Which is a shame, because it’s also all-new. As is the modern way, the old normally aspirated 6.75-litre makes way for a twin-turbo unit of identical capacity, whose 663 torques are probably more relevant than the 563bhp power output, and are available from just 1,700rpm. One imagines that this engine has more up its immaculately tailored sleeve than it’s currently being allowed to deploy. Like the Wraith, the Phantom uses the Satellite Aided Transmission and 8spd ZF transmission. Not only does this car know when there are bumps in the road ahead, it also knows if they’re in the middle of a corner.

This will be a relief to the chap behind the wheel – cars like the Phantom long ago having pioneered the idea of autonomous driving without actually dispensing with the driver. The new one is still fitted with myriad assistance systems – so many, in fact, that the heart of its electronic architecture is the single largest component produced by the BMW Group. That said, despite its enormous cost, the Phantom isn’t about ramming itself to the gunwhales with new technology; it’s about luxury, experience, and perhaps even entertainment. That’s as much about the tactility of the doorhandles as it is how elegantly this thing comports itself. And, of course, how it looks as it moves through lesser traffic. 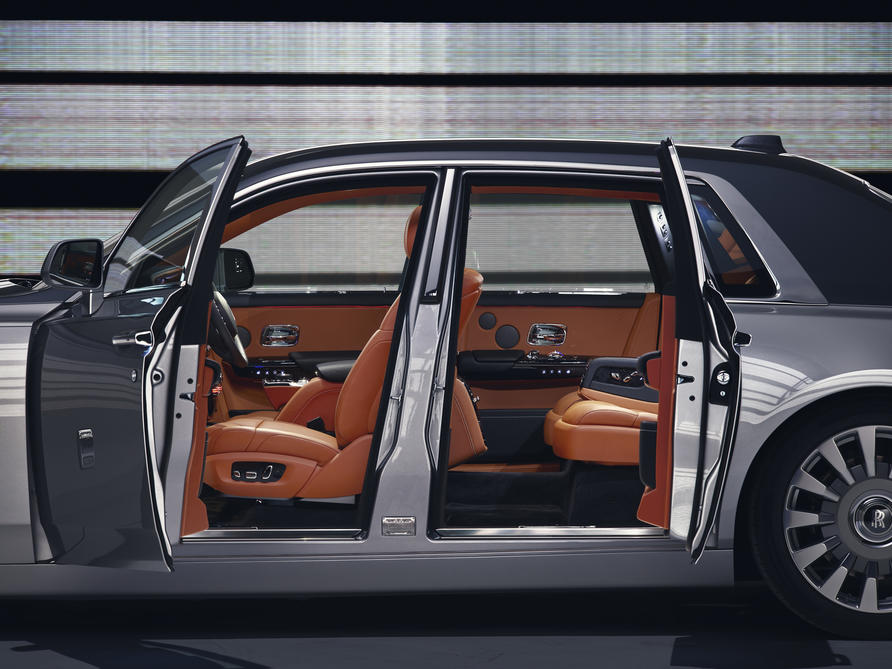 “There have been so many Phantoms over the years, there’s almost too much material to sift through,” Rolls’s design director Giles Taylor says of the challenge. “It’s like being a movie director: we have the best actors, the best cinematographer, and the best lighting guy. The only problem is you’ve got to serve up the sequel to The Bridge On the River Kwai.”

The new Phantom, he argues, is a car that should improve the day of whoever sees it, never mind the lucky devils inside. And while it’s a clean-sheet design, it adheres to Rolls’s first principles. “There had to be a recognition that the Phantom has a dose of classicism baked in. We embraced that, wanted to understand that. Some car designers go out of their way to deny the word ‘style’, and the very concept of stylist. But when it comes to understanding a car like the Phantom, it’s all about style. My quest was to enshrine that in the silhouette. It’s not what you wear, it’s how you wear it. That sense of presentation should never be denied.”

Few people in this business understand how to work a car’s surfaces as meticulously as Taylor, and the deeper you get into the new Phantom, the more magical it becomes. The grille is softer and more laid-back (in both senses), the windscreen’s rake much faster than before, the rear end more tapered and super-formed in aluminium for perfect radii. Both front and rear lights are hi-tech (the fronts use lasers with a 600m beam range). The Spirit of Ecstasy sits an inch higher than before, and enough of last year’s fabulous 103EX show car has made its way into the new car without scaring the faithful.

Inside, the rear occupants get to enjoy what Rolls calls the “embrace”. You don’t sit in this car, you get absorbed into it. This also runs to a variety of seating options, Lounge or Individual, with console variations and drinks cabinets or coolers to match. Every item of switchgear is made of metal. As well as heated seats, you get heated front-door armrests, lower C-pillar, and rear side armrests. Nothing as unseemly as a touchscreen is allowed in here, either; the rotary controller remains. Finally, Rolls has managed to turn the Phantom’s cabin into a gallery space: an expanse of toughened glass runs the full width of the dashboard. What price a Damien Hirst commission? Oh, who cares. 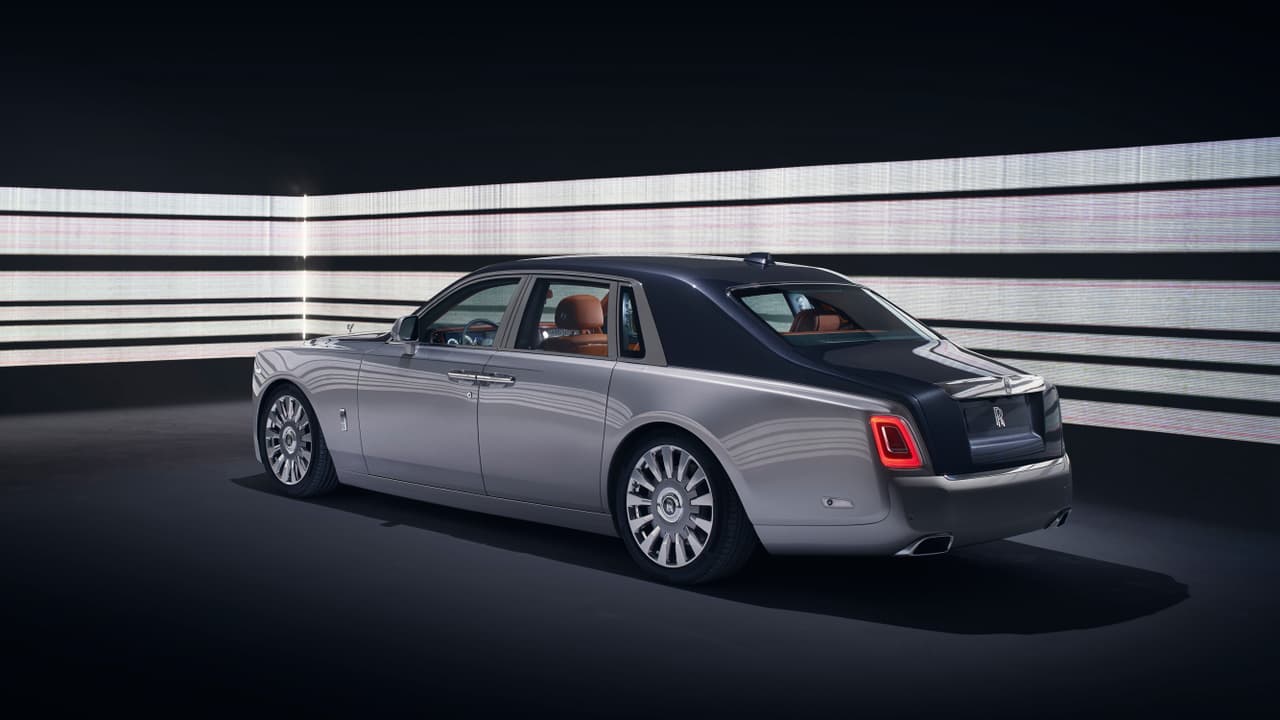