Three wheels are where the Morgan story began. As the 3 Wheeler heads for replacement, it’s time for a trip down memory lane

The circuit at Bicester Heritage is not big, nor especially quick. Yet today its straights feel as dicy as the Döttinger Höhe and its corners as tummy tightening as Eau Rouge. If you want to make 40mph feel more like 400, it’s simple: swap your steering wheel for a tiller and put what scant braking ability your car has at the end of a lever unhelpfully close to the gear shifter.

Oh, and make sure the car in question is the unique fruit of years of autojumble-scouring labour. That’s because the car in question is sort of a 1910 Morgan Runabout, the origin of the bike-engined 3 Wheeler you can still buy today, though which is soon being replaced. And gentrified with a modern 3cyl engine that’ll be housed inboard. 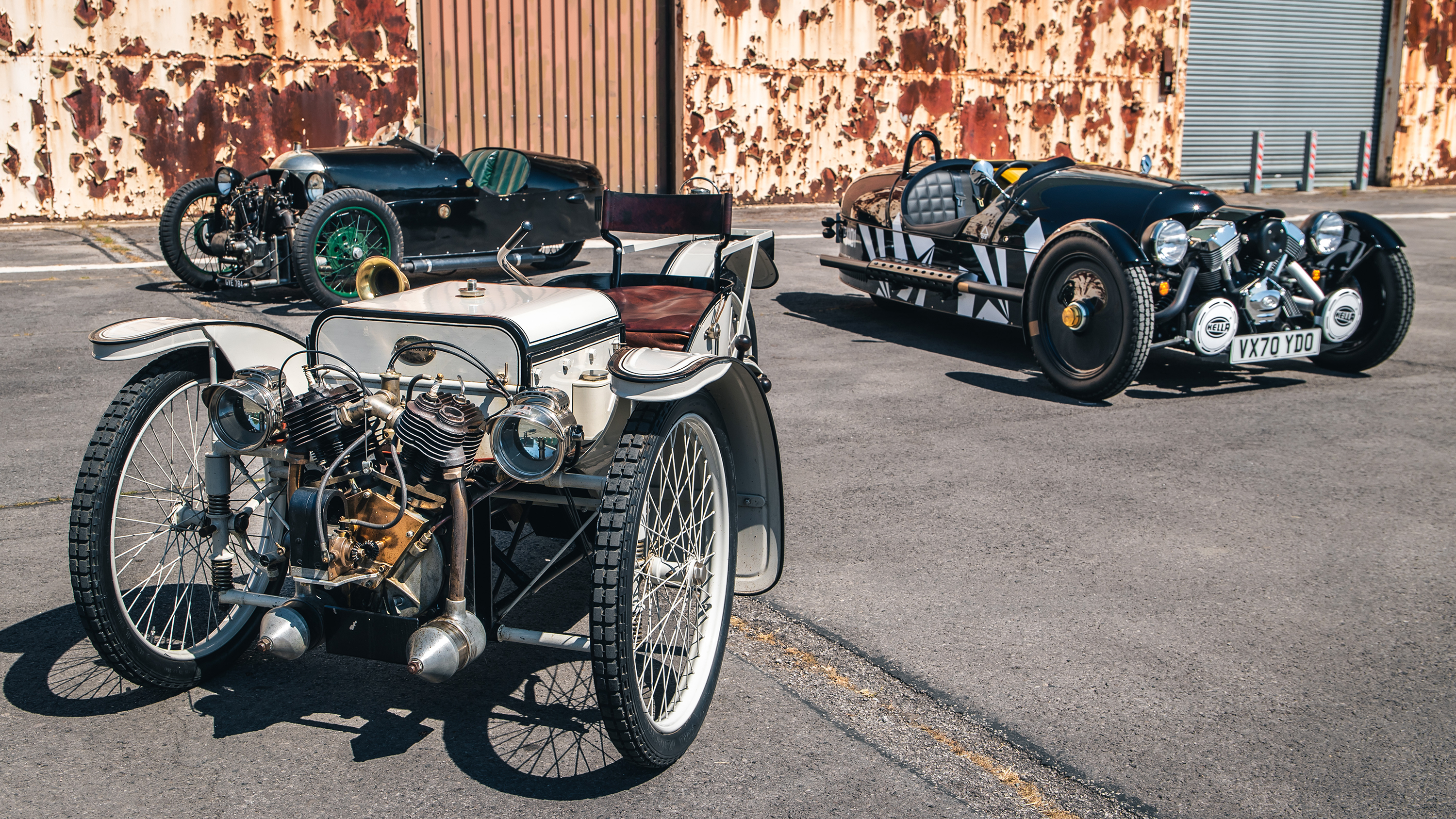 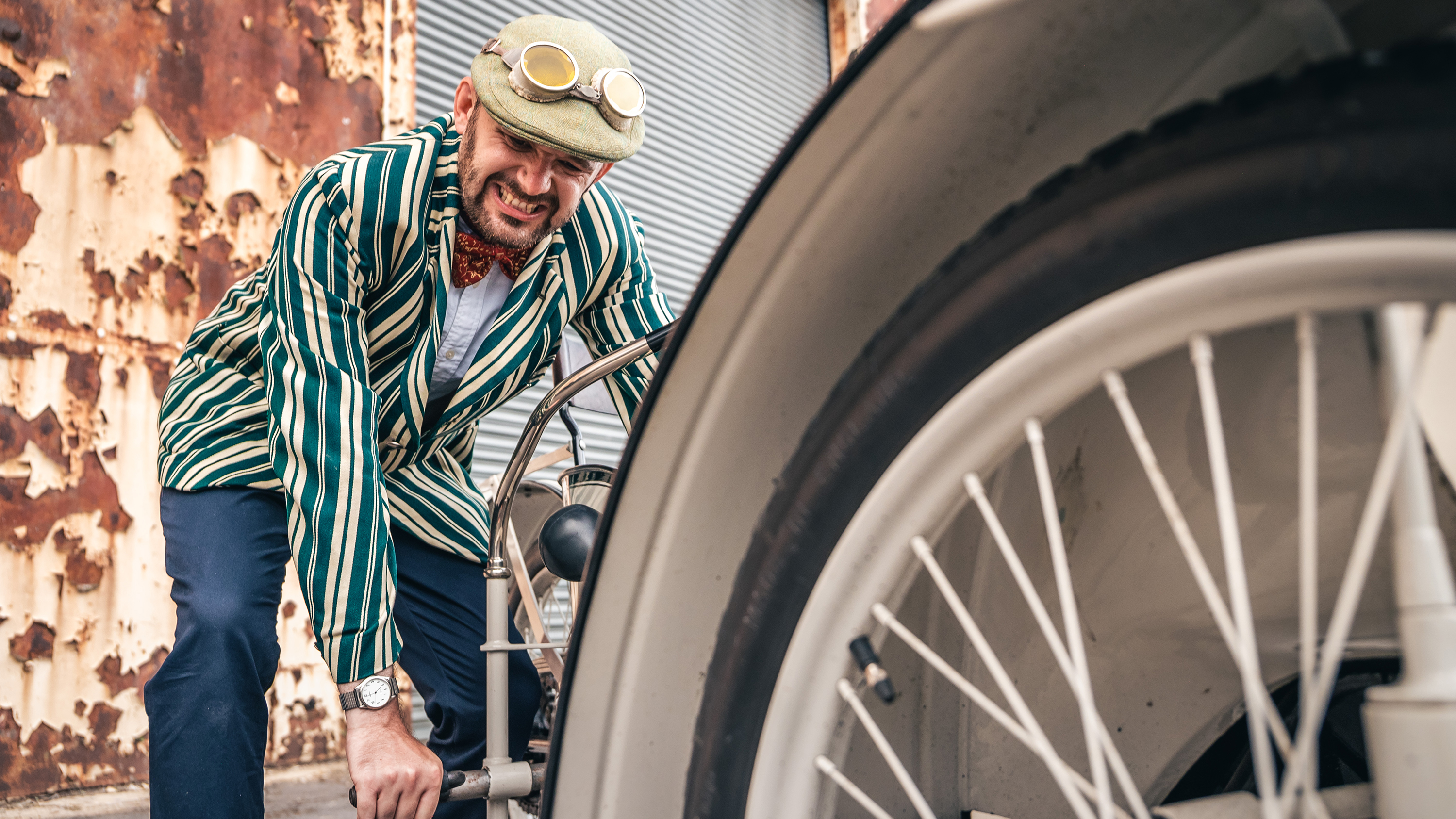 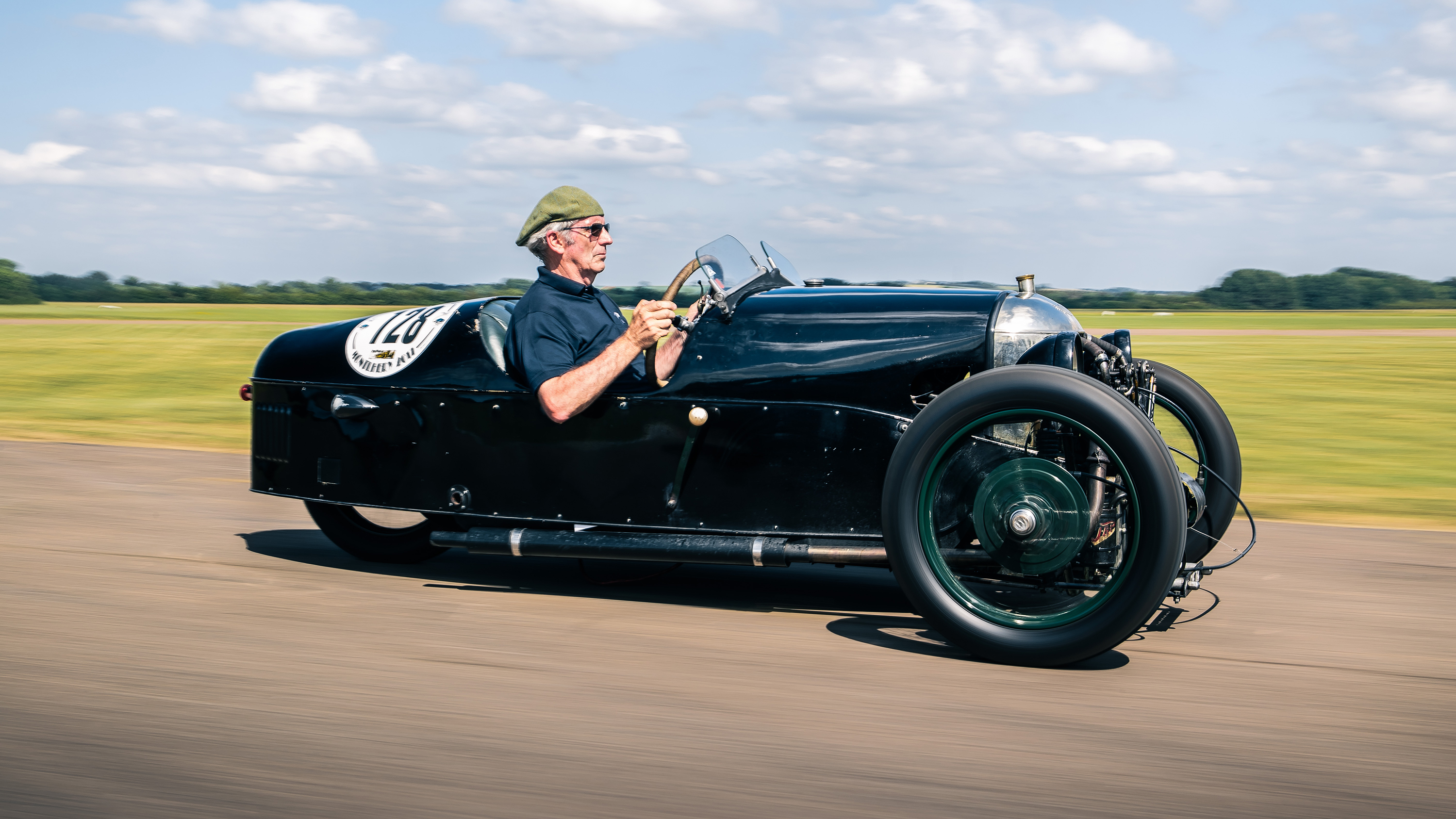 The black on white treat you see above is effectively a recreation of one of Morgan’s first ever ‘cyclecars’ – and thus cars full stop – just with original, period correct bits making it more than a mere replica. And it’s the pride and joy of Martyn Webb, who’s watching on from the sidelines as I careen into corners performing the driving equivalent of patting my head and rubbing my belly... while also doing the Macarena.

He doesn’t put a price on what it’s all cost him, but a small insight into individual components – and the simple fact it took eight years from concept to reality – paints the picture of a very prized item. The engine, an original eight-horsepower 1910 JAP V-twin, cost £3,000.

Restoration of the lights (in Birmingham’s Jewellery Quarter) was £600. Those gas lamps capture my attention before anything else, in fact, a real window into the age of the Runabout’s soul. The rear item, looking like a miner’s lamp gone AWOL, uses paraffin. But the pair up front – resembling the eyes of a melancholy Cars character – use acetylene pumped from a generator behind the driver’s shins; you fill it with water and carbide crystals which concoct the acetylene gas that’s sent to the front lamps. 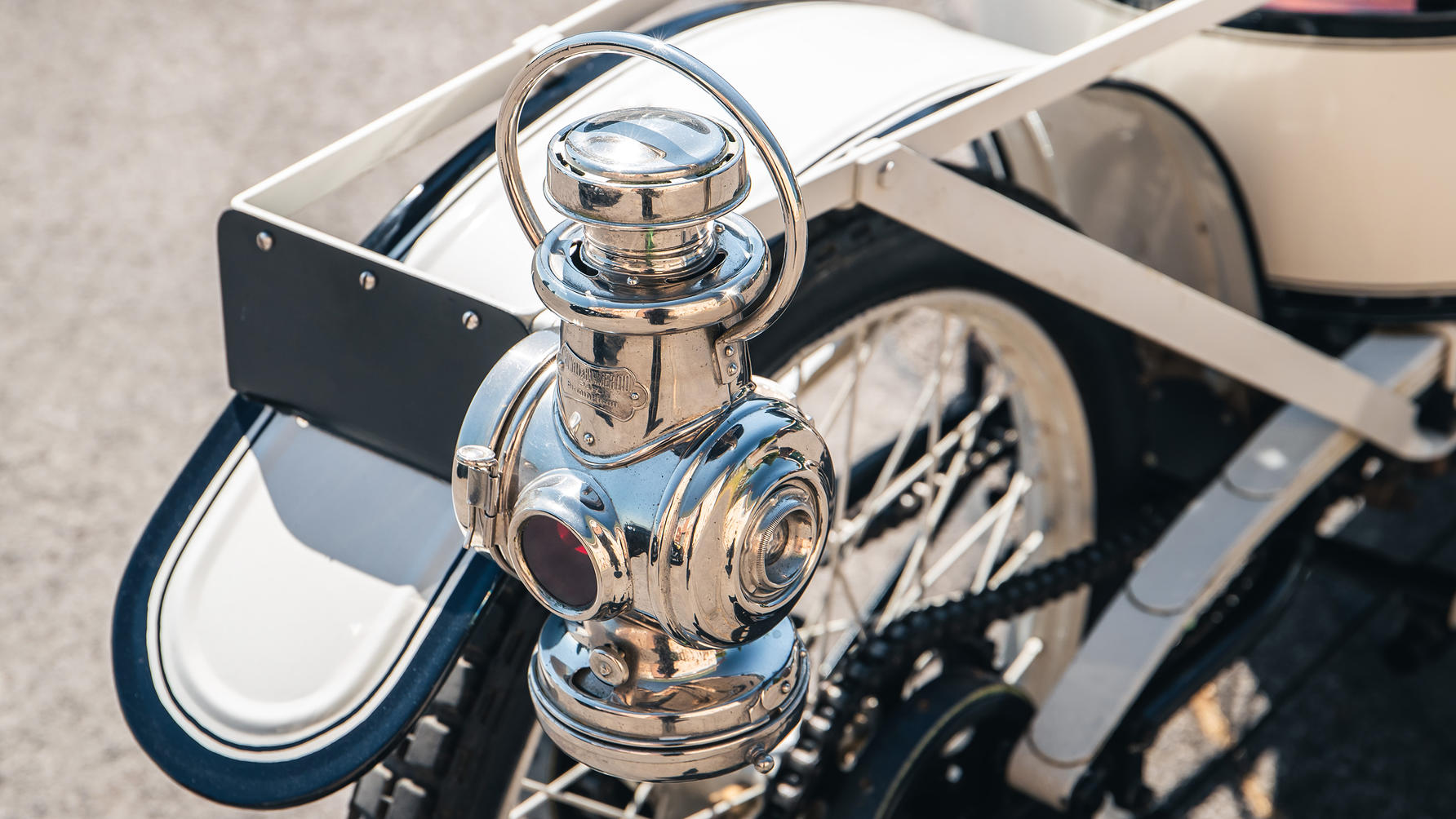 I’ll save you the much longer-winded (and eight-step) starting procedure, which culminates in the burly crank of a handle. The pressure on me not immediately stalling after Martyn’s implemented it all is huge, especially given the throttle is a tiny hand operated lever, sat to my left with the girth of a pencil. As my first taste of a pre-war car – pre both wars, in fact – it could be a baptism of fire.

But the Runabout lives up to its name. This delectable little cyclecar jets off like an EV with launch control upon my first nervy twitch of the hand throttle. But once I’ve heaved the steering tiller with my right hand – narrowly avoiding punching an oddly shaped hole in the side of an old RAF hanger – the car and I become firm friends, running merrily about Bicester’s access roads at a genuinely thrilling 20mph or so. I wish for no more speed despite Martyn egging me on to pull the Runabout’s second gear and aim for its circa 50mph top speed on track.

Not least because there are a couple more cars on hand. The Runabout arrived on a single car trailer but wasn’t alone; the beauty of cyclecars is you can wedge two together like Dairylea triangles. It does mean Martyn ends up touching up the black detailing of his Runabout with a fine brush once it’s disembarked, but the other car is proudly battle bruised.

It’s a 1928 Morgan Super Aero, kindly lent to us today by Rob Pike. He’s not present and it’s fair to say he’s not precious – the car is covered in scars and scrutineering stickers from innumerous race meets, not least revival events at the terrifying Montlhéry autodrome near Paris (where, I might add, Martyn has verified his Runabout’s vmax).

On the surface, this’ll be far less intimidating to drive. There’s an actual steering wheel. You’re ensconced in bodywork rather than sitting vulnerably atop it. And while there’s again a hand throttle, it also boasts an optional foot throttle. It’s no bigger than the stubby little device designed for my fingers, but it’s placed to the right of brake and clutch pedals in a wholly familiar layout. It feels like a leap above the Runabout despite its similarly laborious starting procedure. The caveat is that the middle pedal feels as good as redundant. 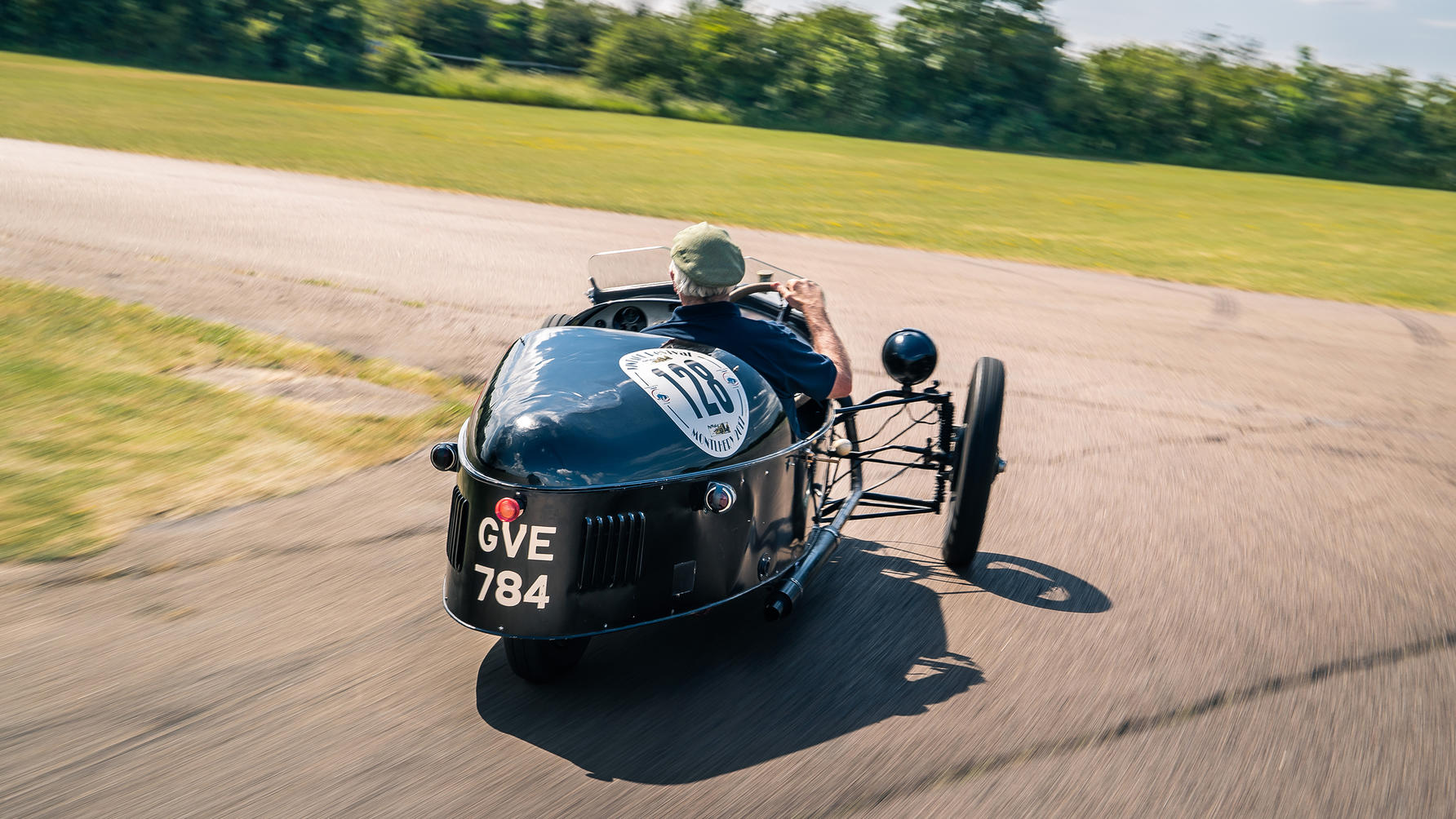 We’re up to around 40hp now, so a notably brisker car than the Runabout. But with such big strides made ergonomically, it’s no more unwieldy to pilot, and being bum to the ground plays a big part in getting a much quicker handle on its character. No wonder Rob races it so much – it’s got an insatiable attitude that won’t be dimmed by such dull concepts as ‘braking’, at least not today. It’s a riot.

This sportier Morgan Aero arrived just as the cyclecar boom was ending, though. Omitting a fourth wheel had given Morgan’s cars a tax advantage for two decades – and they’d proved very adept in motorsport, too – but four-wheeled rivals such as the Austin Seven were becoming competitively priced and Morgan’s own 4/4 debuted in 1936.

Morgan cyclecar production ended in 1952, leaving a near 60-year gap before the design made a hilarious (and triumphant) 2011 return via the ‘modern’ 3 Wheeler. With 2,500 made in the last decade, it’s one of Morgan’s biggest sellers ever, despite its layout no longer ducking taxes. This 70-plate Project 101 is the run-out special, decked out in the designers’ extravagances that didn’t yet make it to production.

Yet it looks spookily alike the Aero that’s 93 years its senior, and I’ll be honest, its driving experience shrinks the age gap. There’s much modernity here – a key and starter button fire its 82bhp American S&S V-twin easily into life, you’ve a steering wheel, three pedals and an H-pattern gear shifter inherited from a Mazda MX-5 and the lights flick on and off with a switch – but the way it needs to be manhandled through Bicester’s twists and turns is familiar. 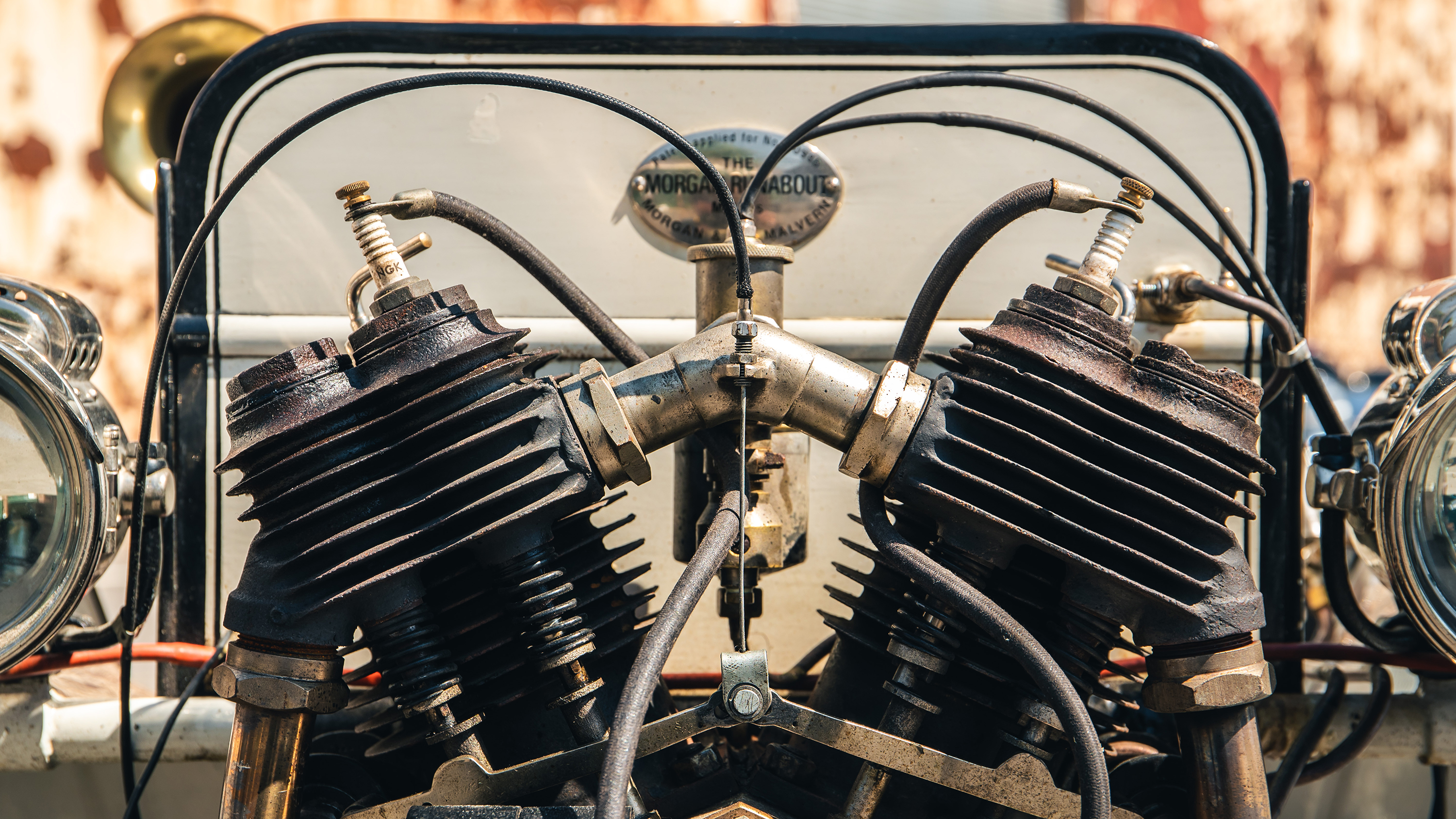 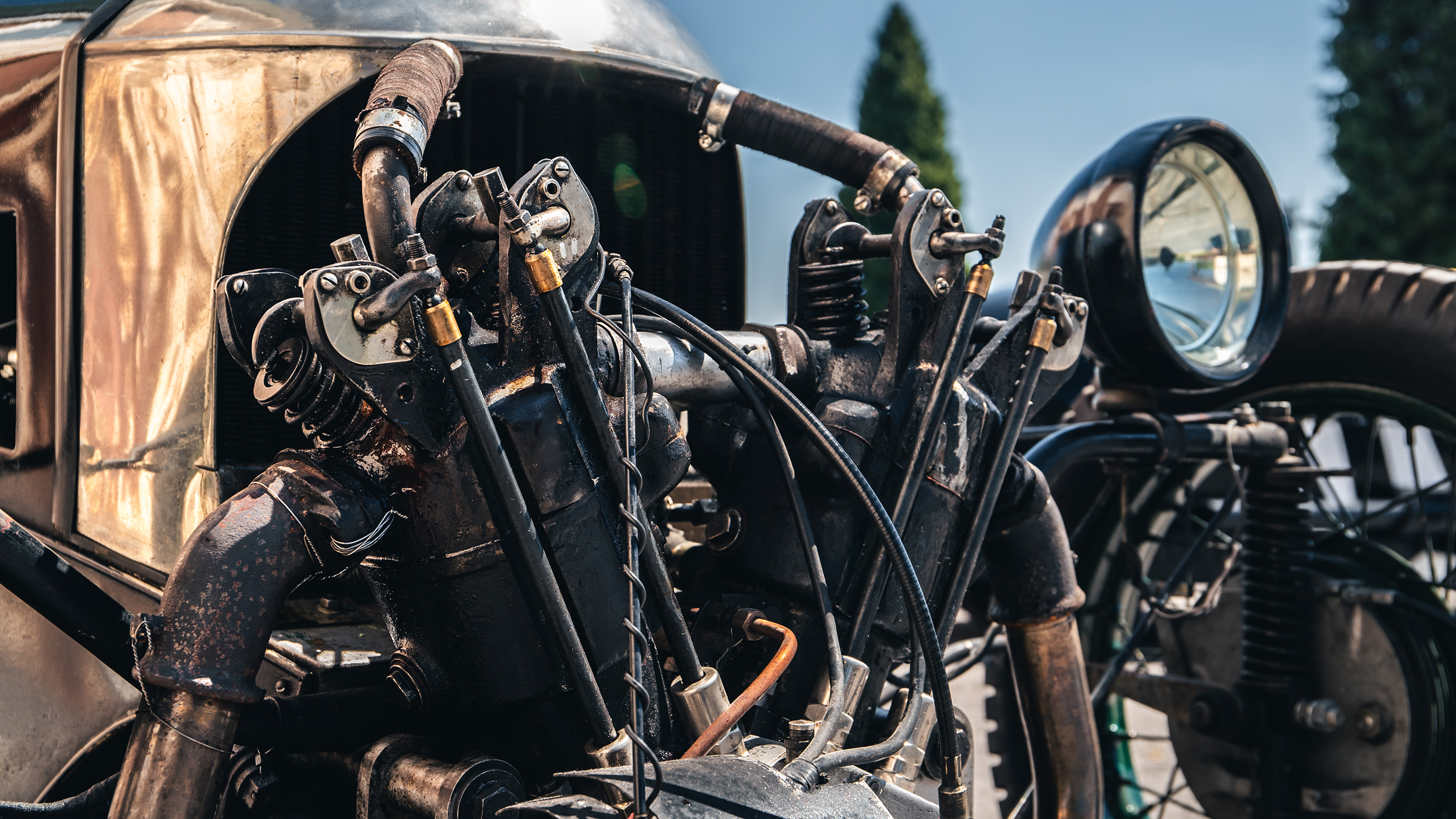 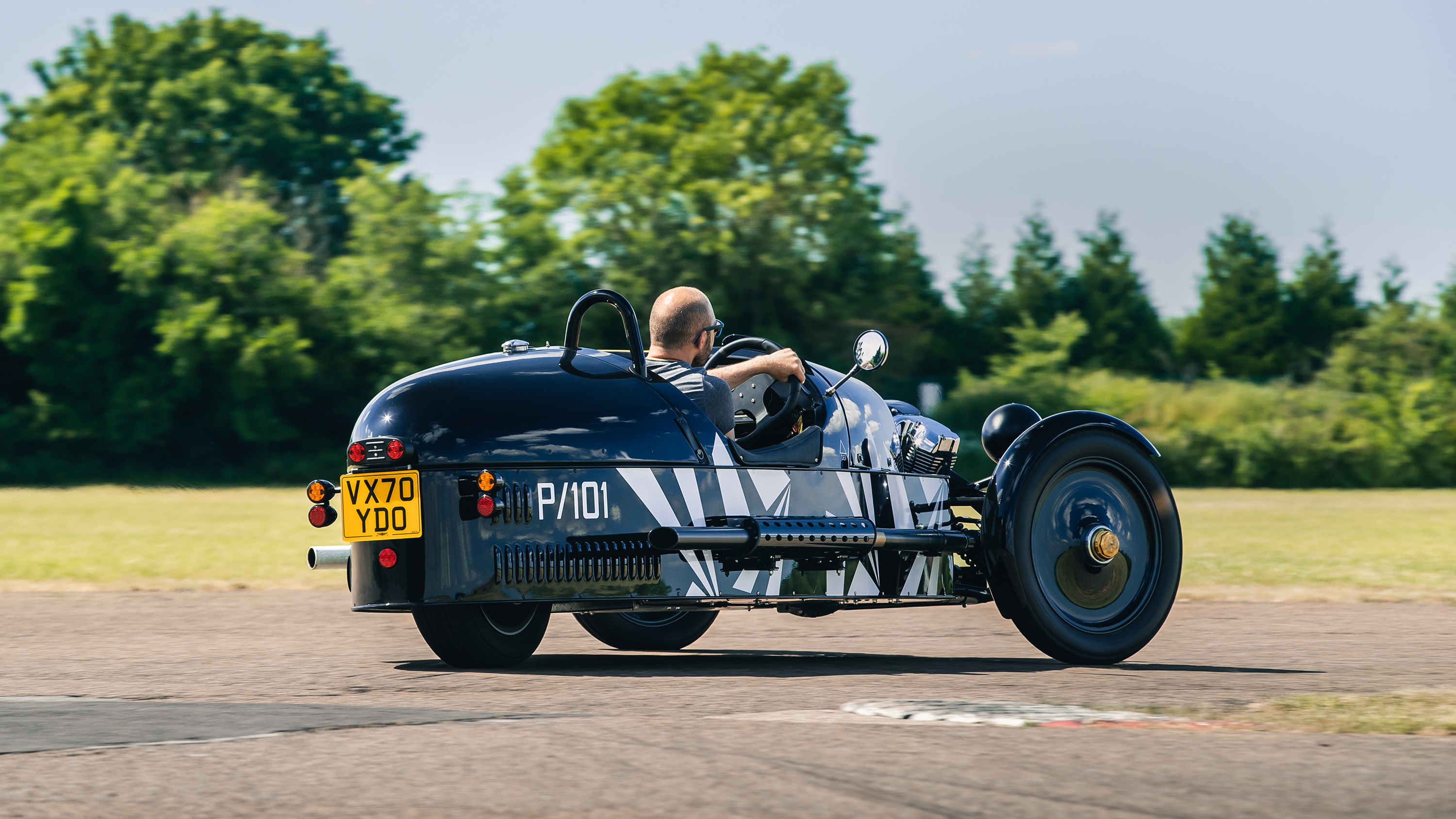 I’ve not yet covered the quirks of a three-wheel layout, because the Runabout and Super Aero are so absorbing to merely operate, the limits of an asymmetric layout are never an issue. Simplify the controls – like the 21st century 3 Wheeler has – and suddenly the pressing issue of a miniscule front contact patch and a torquey bike engine powering a solo rear wheel come to the fore. But the heave you need to give the Runabout’s tiller is little different to the muscle you need to throw at the P101’s steering, only in the 2021 car I can confidently blip a downchange into a corner (not so simple when the gearlever and throttle are hand controls on the same side, as per 1910) then power out, with the occasional comical chirrup of a weeny one-wheeled slide.

Giddy from just what a distilled slice of feelgood the latest 3 Wheeler is, I confidently board the Runabout for a proper go before it’s wedged back on the trailer. And this time I’m going for top gear. The ‘slow in, fast out’ approach of the new car works well here, with even more predictable balance thanks to how delicately your fingertips can adjust its throttle. Plunge that forward to its stop and this becomes a different beast entirely, exhilarating as we hit 40mph before performing the pre-corner dance once again.

Martyn is a brave man, not only for maxing this thing out on the Montlhéry banking, constant pressure on the tiller to fight gravity, but for letting this begoggled millennial get to grips with his priceless toy today. As Morgan once again modernises the 3 Wheeler it’s a delightful reminder of where its roots began. Three really is the magic number. 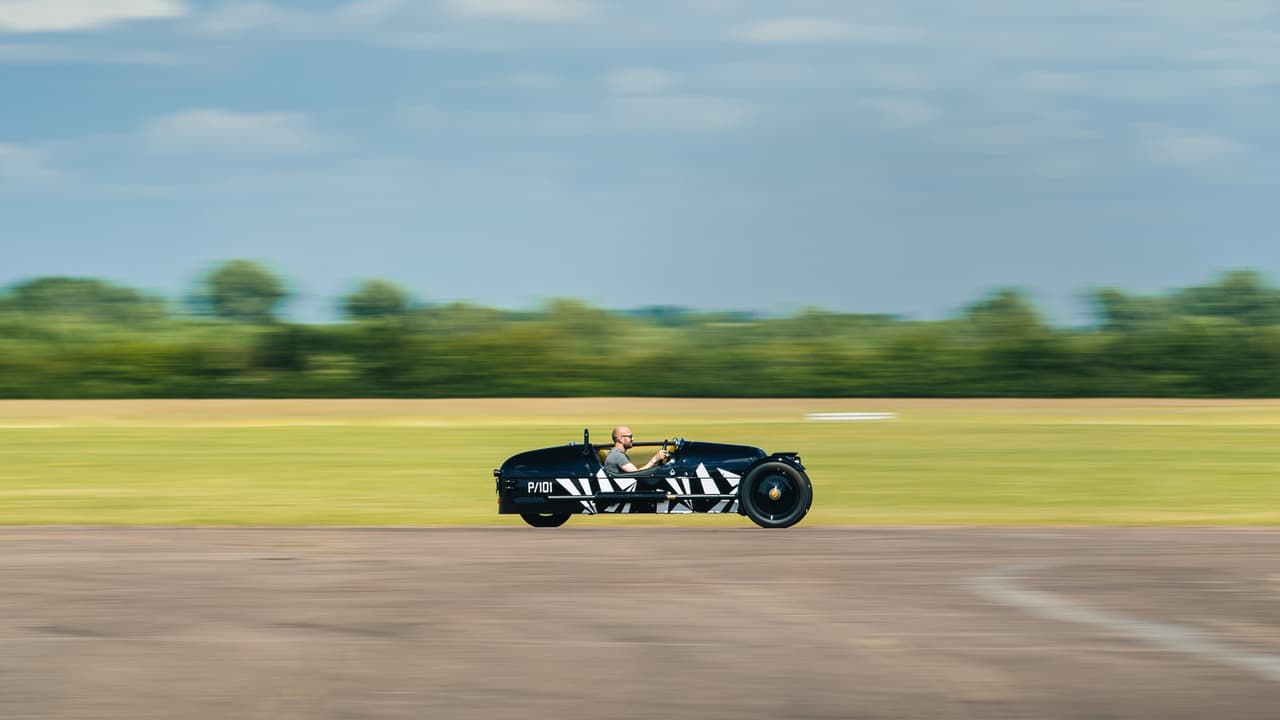