Welcome to Top Gear's Speed Week. The 14 best performance cars in the world will descend upon a mildly terrifying Seventies-spec F1 circuit, for several days. There will be 'enthusiastic driving', there will be a well-stocked tyre truck close to hand and there will be industrial quantities of home-made sandwiches. But first we need to get there: this is the story of Team France...

As jobs on Speed Week go, "can you fly to Molsheim, collect the Chiron from the Bugatti factory and drive it and the Alpine to Clermont-Ferrand?" isn't one you have to think hard about. And so it is that I find myself stood in front of Château Saint-Jean on a bright autumnal morning staring at a white and blue carbon-fibre Chiron with an Alpine A110 parked beyond it. As we take photos, Bugatti’s CEO, Stephan Winkelmann arrives, a curious look on his face. “This isn’t really a comparison, is it?” He does have a point.

While both the Bugatti and Alpine claim French nationality, they couldn’t approach the business of propulsion from more distant ends of the spectrum. The Chiron costs £2.5 million (50 Alpine A110s) and features an 8.0-litre quad-turbo W16 engine delivering 1,479bhp and 1,180 torques. At less than quarter of the size, the Alpine’s 1.8-litre turbo four develops a sixth of the power, while its body weighs roughly half as much and is just under a foot narrower. But both are exquisite answers to their very specific and contrasting briefs: the Chiron an unashamed piece of money-no-object opulence, the Alpine from a world where every gramme matters.

Conscious that with great power comes great responsibility (not least because I’ve just signed a slightly terrifying waiver) and with our destination a 400-mile drive away, it’s time to leave the luxurious sanctity of the Bugatti Atelier and head south on the A35 via Colmar and Mulhouse. To alleviate some of the panic being responsible for a £2.5m work of automotive art brings, I have a co-pilot in the form of 1988 Le Mans-winning legend and Top Gear’s favourite passenger Mr Andy Wallace. As we ease our way down the autoroute, Andy recaps some of his favourite Chiron facts. 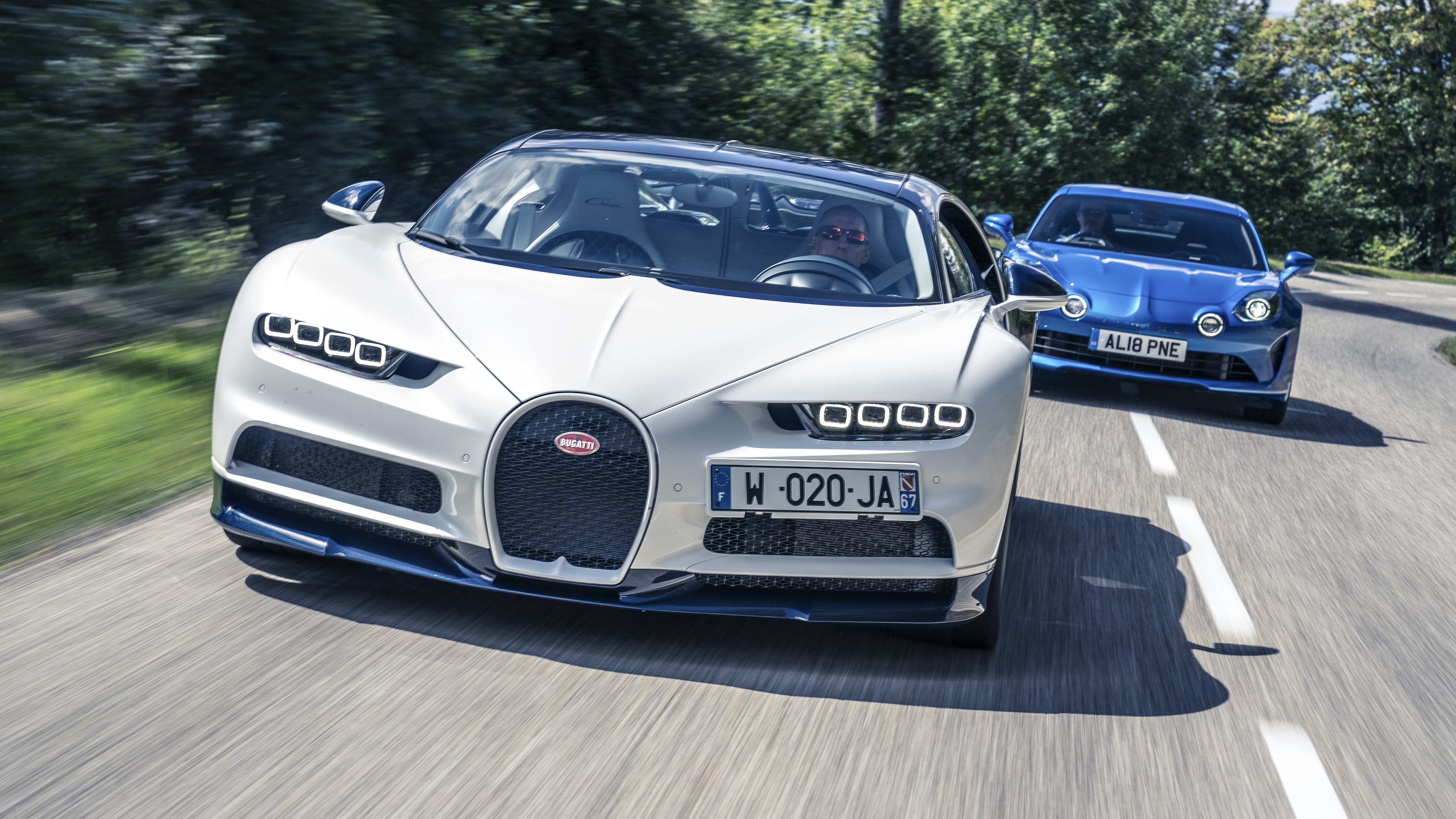 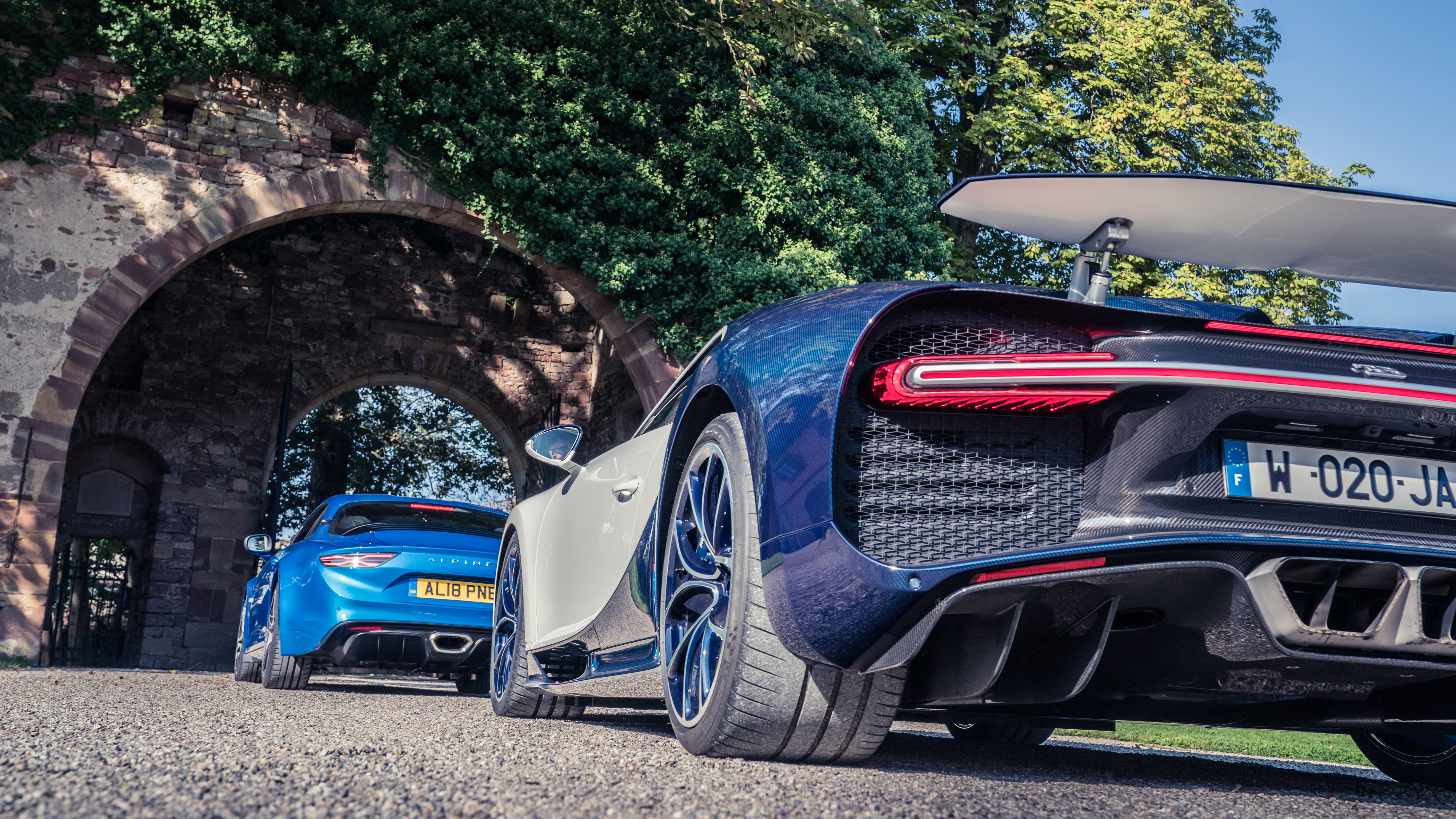 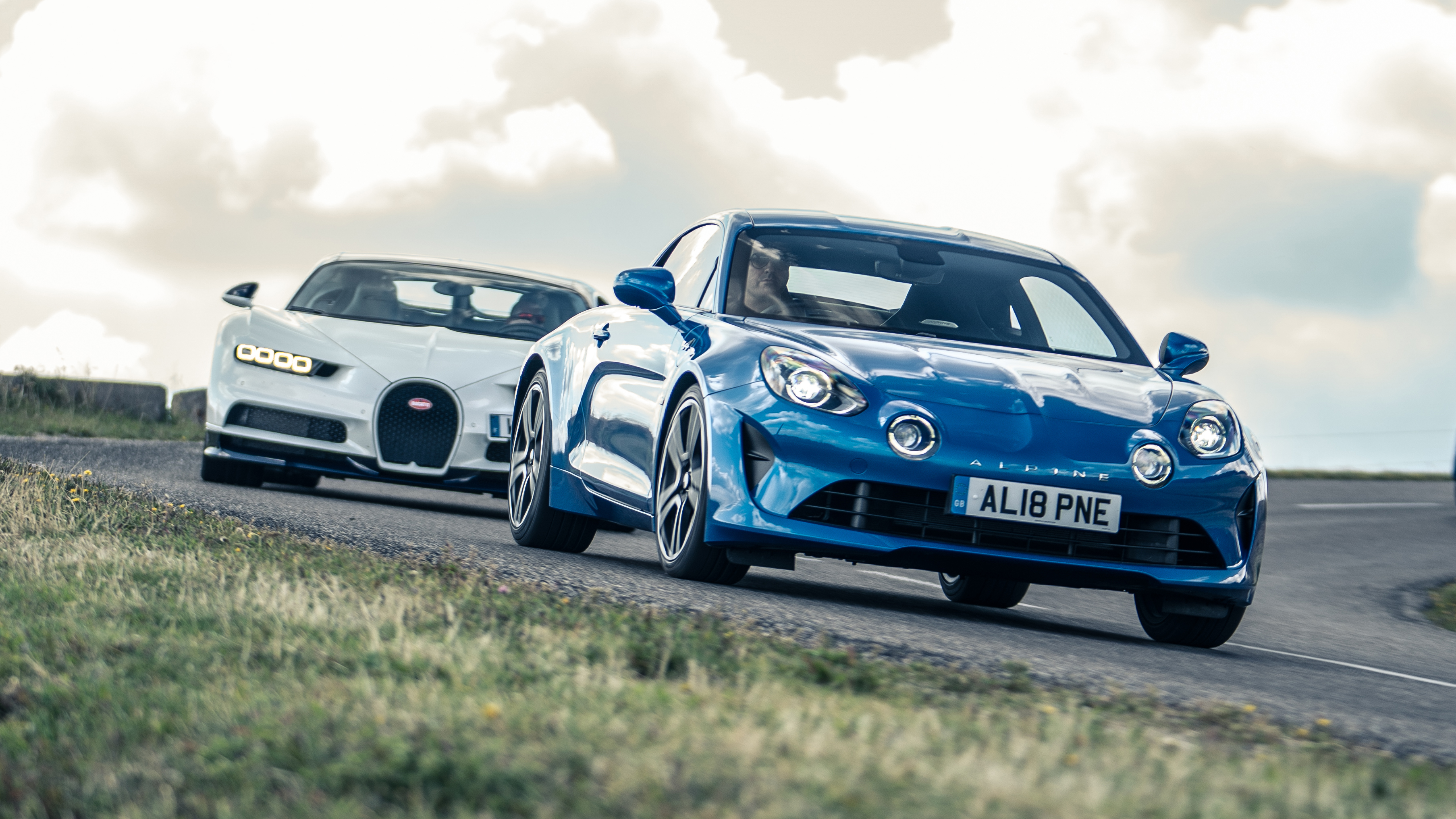 At speed, the Chiron ingests 60,000 litres of air and pumps 800 litres of coolant a minute (that’s the equivalent of filling a bath every 12 seconds). The valve cap on each wheel weighs 2.5 grammes, but weighs 7.2kg at vmax due to centrifugal force. If you could find a straight long enough, the Chiron would drain its fuel tank in six minutes and 49 seconds. To keep things clean, the six catalytic converters have an internal surface area of 30 football pitches. The iconic macaron badge weighs 150g (140g of which is solid silver). And, my personal favourite, the luggage compartment will take 44 litres, slightly more than my baggage allowance on the easyJet flight that got me here the previous day.

Our first pitstop reveals parking a Chiron in a supermarket car park is hazardous, and not because of limited rear visibility. No, the danger comes from distracted passers-by tripping over kerbs and other onlookers to get the perfect shot. Supermarket swept for staples (many baguettes and much charcuterie), snacks secured and inserted into the support car, we head north towards Le Grand Ballon, the nearest thing this area has to a decent bit of elevation and the promise of some handy driving roads on the way to its summit.

After a brief assault course of speed bumps on the exit of Cernay, we turn left onto a single-track road and thread our way up the mountain at 10mph. Oncoming traffic watches as I gingerly squeeze the Chiron past various 4x4s and logging trucks. Mild sweating occurs and, 30 panic-strewn minutes later, the road finally opens up to a piece of beautiful alpine ascent tarmac, perfect for digging into the Chiron’s capabilities.

Switching from EB (the cover-all automatic mode) past Autobahn to Handling, the Chiron stiffens up its reflexes, adds weight to the steering, and dials in four degrees of angle to the rear wing. Now, anyone who says the Chiron is a one-trick pony, all about the big numbers, is wrong. Having spent a couple of hours driving up and down the D431, which loosely coils its way to the top of Le Grand Ballon, littered with the kind of corners and camber changes that bring out the best in good cars and the worst in the bad, the Chiron is utterly beguiling.

The limitless power under your right foot is initially unnerving and overwhelming, but as you become accustomed to the visceral punch, you find yourself pouring it into corners and deploying the throttle earlier and earlier to get the turbos ready for your warp-speed exit. Few things compress the space-time continuum as effectively as a Chiron. Yes, its width is imposing on narrow sections and, yes, you’re conscious of the forces involved and 560kg of engine and gearbox alongside and behind you, but it hides mass in a way the Veyron never could.

Keen to come down from my Chiron-induced dopamine rush, I force myself into the Alpine for the wind down the hill and onto the autoroute. For most, this direct comparison wouldn’t end well, but the Alpine is so assured in its direction that it offers a welcome breath of fresh air in a market where many merely chase the Chiron up the food chain. It’s light without being masochistic; it delivers performance that, rather than fry your synapses, allows you to enjoy the moment and communicates in high definition. It is arguably the most joyful, accessible and engaging car I’ve driven in the past four years and encourages you to soak up the journey, rather than batter it out of the way. It is a truly special creation and, as I descend behind the Chiron, I’m grinning from ear to ear at the fortune of my position and the incredible diversity of this wonderful automotive world.

We stop for fuel (the Chiron needs many litres, the Alpine not so many), and I swap back into the Bugatti for the final few hundred miles. Having spent the past couple of hours leaping out of the right-hand-drive Alpine at every péage and legging it around from the driver’s side to grab the ticket, the first toll in the Bugatti looms. With the Chiron’s imposing width and low seating position there’s nothing else for it – the thought of kerbing the Bug is too painful to contemplate – so I thread myself through the window, arse fully out of the seat, and cruise up to collect the ticket. “Where are you going?” offers my overqualified co-pilot. The method is refined over the next couple of hours, and the conversation inside the Bug moves on to Le Mans, battery technology (of which Andy shows a very deep knowledge) and the quest for 300mph: “Honestly, with current tyre technology, I just can’t see it being possible safely.” I miss a key turning and it gives us a 20-mile gap to make up on the others. With the sun now set, the roads empty and the Gendarmes hopefully safely at home enjoying a decent bottle of local red, I dip into the seemingly limitless power of the Chiron never truly troubling more than 800bhp, but covering miles with an ease and speed that is frankly incomprehensible.

Success
Skip 8 photos in the image carousel and continue reading 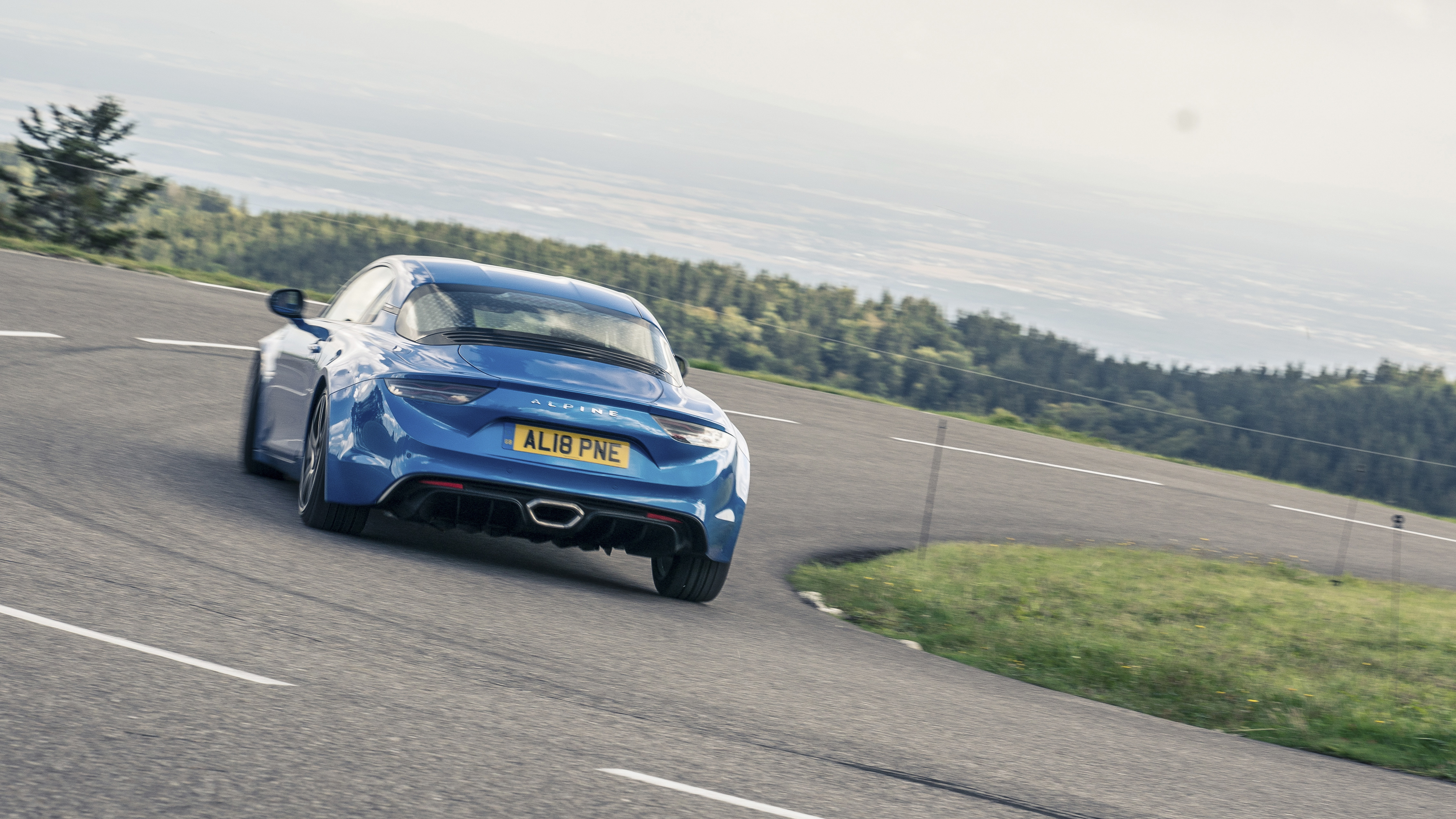 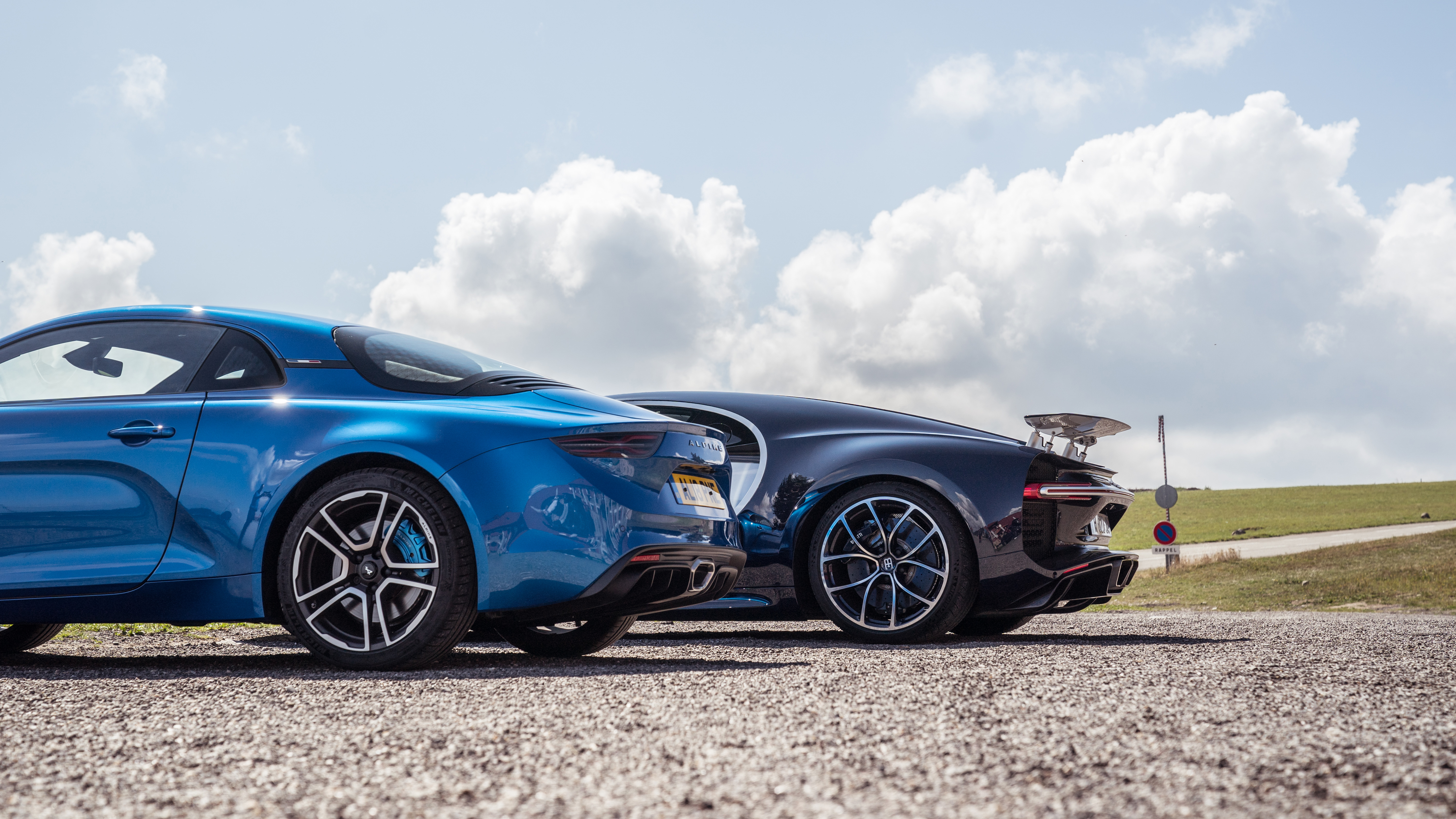 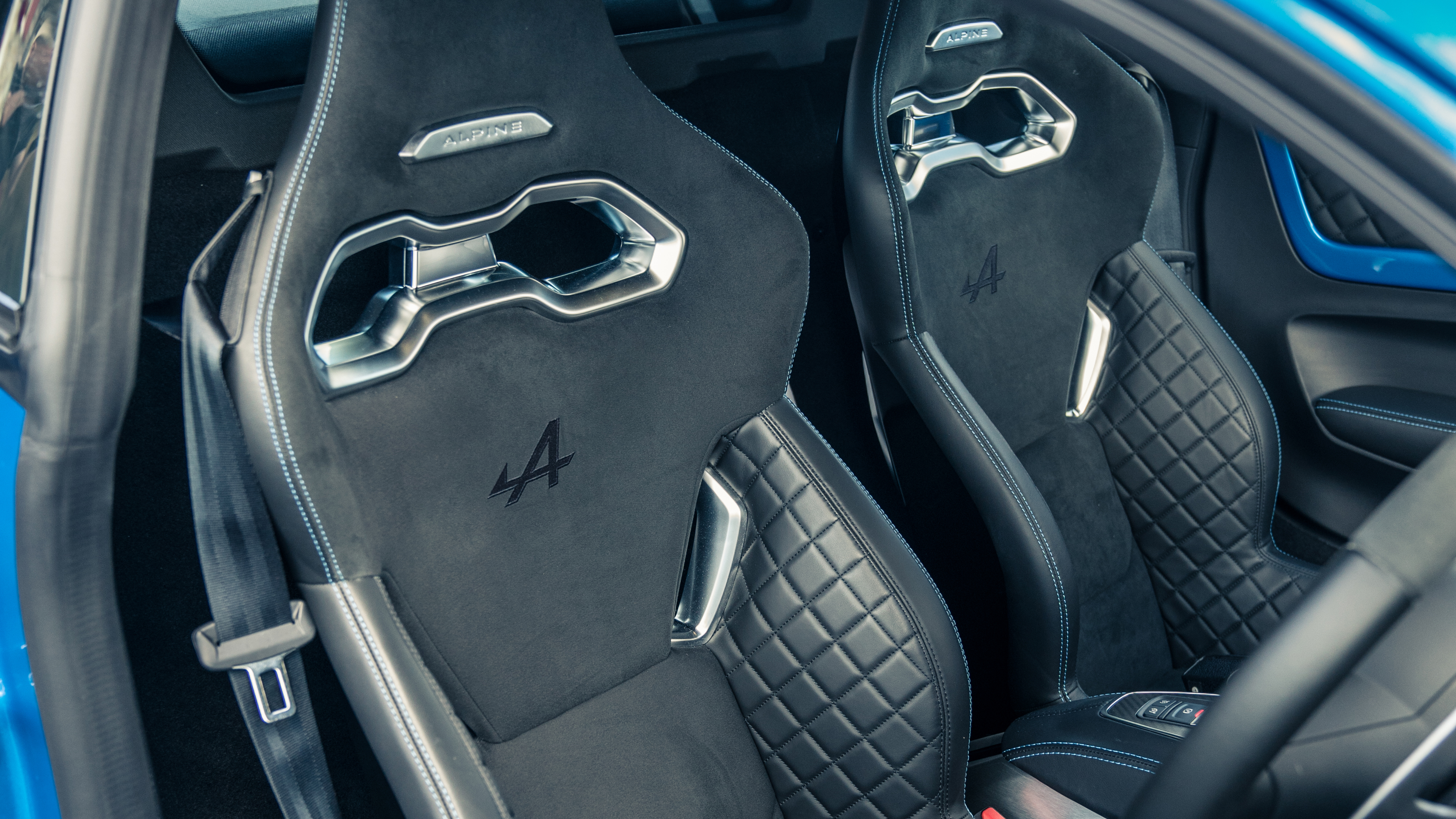 Can a car really be worth £2.5m? It’s something us mere mortals will struggle to get a handle on, but having spent a day in the Chiron, digging into its potential and enjoying every facet of its operation, I find it hard to argue against the asking price. It is just so capable, so beautifully engineered and finished, every touchpoint so exquisitely crafted. And how can you put a price on the ultimate expression of limitless performance?

The Alpine kicks against all that the Chiron stands for, it sets its own direction rather than getting caught up in the performance wars left trailing in the Bugatti’s wake... and is all the better for it. A truly brave piece of fresh thinking.

As the Chiron rumbles off to its underground lair for the night, we jump in the A110 and head to the somewhat more basic TG gîte. Tomorrow, the track beckons, but it’s clear that the 14hrs and 414 miles covered today is an experience that’s going to be hard to beat.

Pick up the new issue of Top Gear magazine here 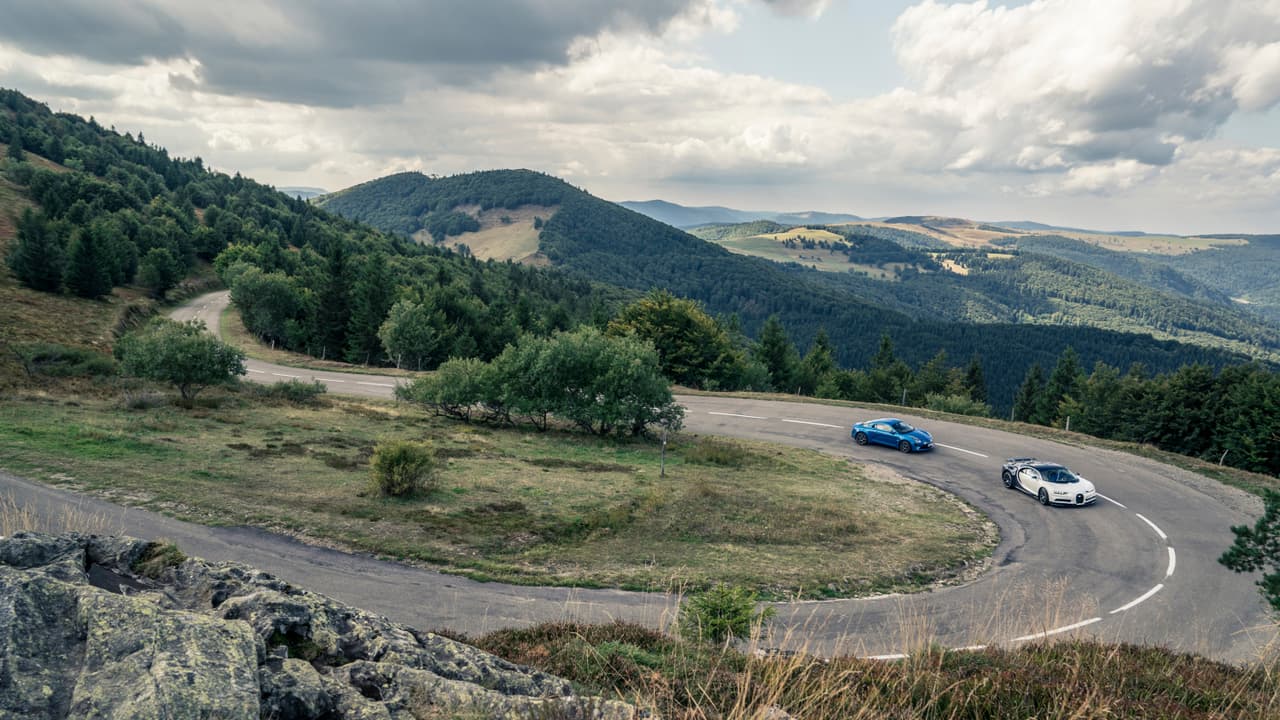