Those sensible Germans do fast in all shapes and sizes, if you're brave enough

Welcome to Top Gear's Speed Week. The 14 best performance cars in the world will descend upon a mildly terrifying Seventies-spec F1 circuit, for several days. There will be 'enthusiastic driving', there will be a well-stocked tyre truck close to hand and there will be industrial quantities of home-made sandwiches. But first we need to get there: this is the story of Team Germany...

The Germans' splendidly literal language is not short of ways to brand someone a wimp. Try Schattenparker, or ‘someone who parks their car in the shade.’ Don’t like it? You’re quite the Beckenrandschwimmer – ‘one who only swims around the edge of the pool’. Exposed to this pathological intolerance of fear or caution, it’s small wonder that Germany cultivates the most diverse crop of alarmingly intimidating cars. Welcome to Team Deutschland, literally über alles.

We’re up in the clouds because while I could detail how these three behave on the boring m’way slog from their fatherland, it’s hardly box-office. Dragging a gazebo wing through the air atop a 691bhp arse doesn’t stop the Porsche 911 GT2 RS returning 29mpg. BMW’s new M2 Competition is a noisy, firm cruiser. And after conducting multiple races, I can confirm that abseiling from the new Merc-AMG G63, walking around its sheer faces, collecting a toll booth ticket before clambering back into its lofty cockpit and rumbling away takes considerably less time than unbolting the GT2’s six-point harness, leaning out of its carbon seat, collecting a receipt and returning all six buckles to the clasp.

So, you join us in neutral Switzerland, on a winding but worthwhile detour between Germany and our eventual base at Circuit de Charade. This is the Gotthard Pass, tucked in the underbelly of Switzerland’s southern border with Italy. Nestled in the Alps over 2,100m above sea level, it’s one of those landscapes so magnificent it’s actually humbling, as if humans have no right to attempt to traverse this craggy, towering diorama of rock and shrubbery.

And cows. Cows that think they’re mountain goats, clinging to the escarpments and chewing the scrubland, off-pitch bells clinking gently. But for the chorus of bovine windchimes, the Gotthard is eerily silent, until a piece of prime German pork punctures the peace. 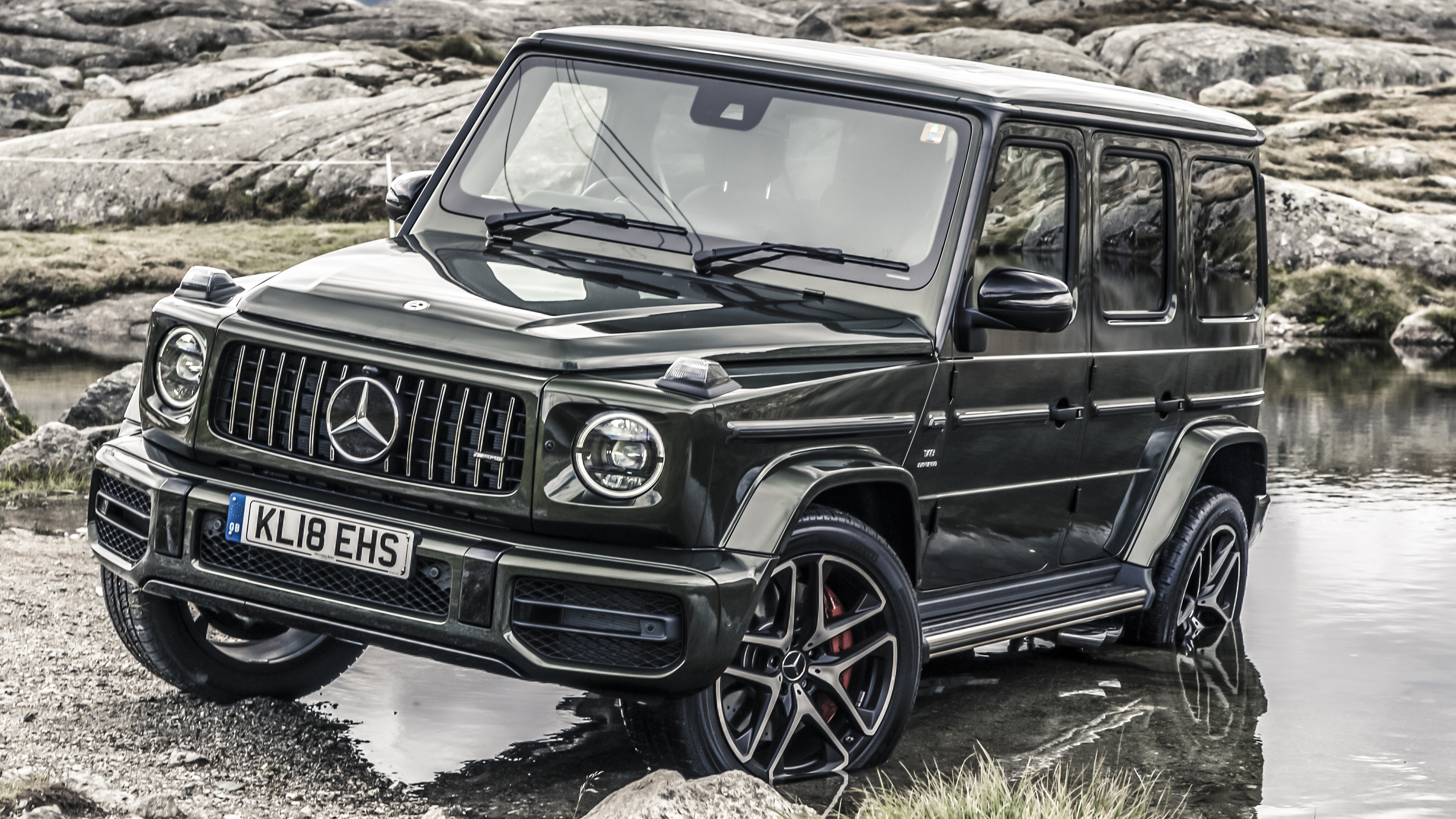 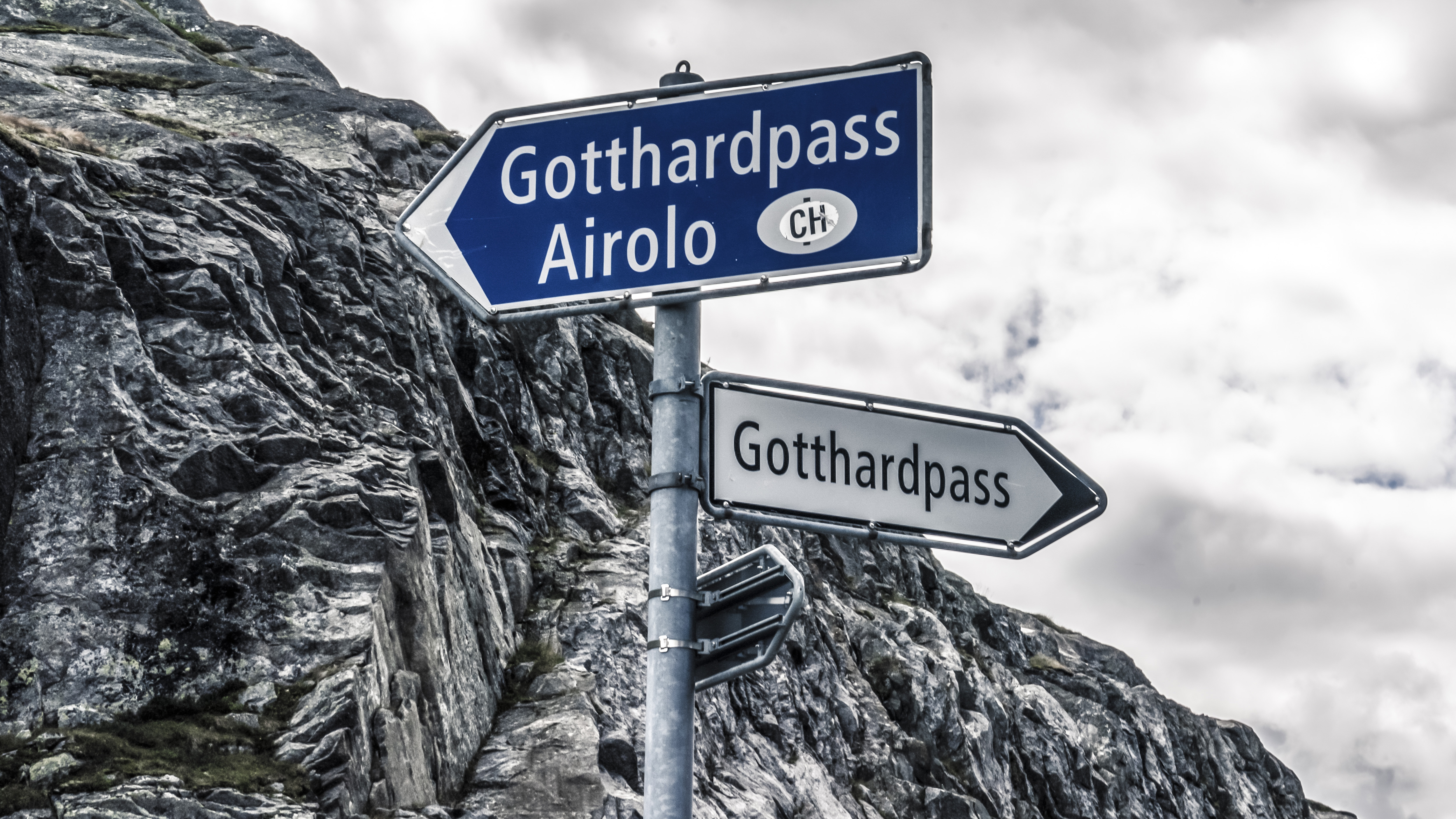 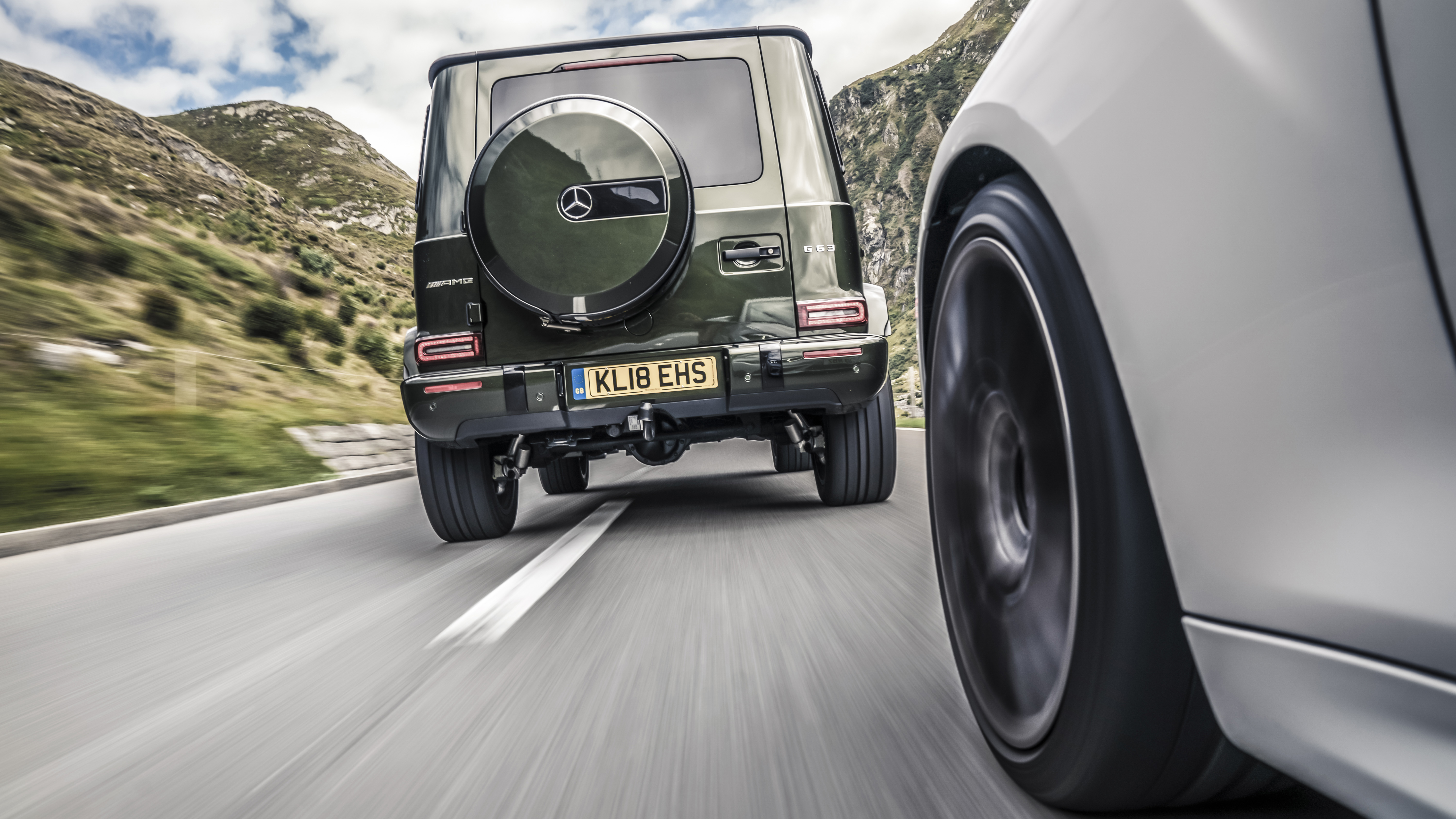 I think someone at Porsche fretted that the GT3 RS already filled the niche of downforce-happy, stripped 911 pretty well, and a model muffled by two large turbos might suffer for raw kerb appeal. In went a titanium exhaust culminating in two massive pipes, and the resulting din won’t so much summon noise police as trigger an airstrike. It’s a flat, cacophonous chunter, rude and flatulent, more lumpy top fuel dragster than perfectly balanced flat-six. Better get out of here before we set off a rockfall. Sorry cows.

No apologies for gravitating to the fastest Porsche ever made. What on Earth were they thinking? A 700 horsepower Beetle, delivering more torque than an Aventador S to just the rear wheels. It’s a 911 Turbo uncensored, and I’m bricking it. I admit it; I’m a Handschuhschneeballwerfer – ‘gloved snowball thrower’. Oh God. I’d fretted about rain. Please don’t snow.

This GT2’s jolly spec slightly eases the intimidation: Smurfette meets The Texas Chain Saw Massacre. Interior directed by Quentin Tarantino. It’s done 14,000km, and the red suede of its button-naked carbon wheel has been dyed a grotty mung by umpteen moist palms. Grasp the petri dish, an extra tug on the harnesses for luck, release the near-solid brake pedal and bwaaaaarrr-tsshh away, marvelling that a vehicle so motorsport could possibly be road-legal.

Discovering the GT2 has deft, chatty steering and a beautifully controlled ride – despite its fully rose-jointed undercarriage – is gratifying, yet somehow a tad trivial. It’s like appreciating the stitching on your parachute before executing a HALO jump over Pyongyang. Except this is faster. This is strictly just the delivery job, but one run through the gears can’t hurt, you Zebrastreifenbenutzer – ‘zebra-crossing user’. On the carriageway that snakes towards the antique, cobbled Gotthard Pass, there are straights long enough to feel the RS’s thrust – ‘acceleration’ is too limp for the quantity of potency this thing conjures. Upshifts are seamless. The speed mesmerising. But not addictive.

I kidded myself that the 2 RS makes more sense on the road than a 3 RS, because you’re rarely able to wind out the nat-asp version to 9,000rpm on the public highway. You get into the GT2’s boost sooner… but you’re lifting out of it just as rapidly. It’s sensationally competent – now life-affirming, not a widowmaker. But right now I’d like to try a car that makes me laugh, not swear.

This is perhaps the quintessential AMG experience, and the finest-sounding car on Speed Week

Tom Harrison has caught up in the G-Unit. “I bloody love that car,” the fringe twitches excitedly. Stephen Dobie has wandered over from the M2 for a leg up into the AMG. “Is that a flat-bottomed Alcantara steering wheel?” he vomits, and recoils back to his stumpy BMW. Leaving Tom to embrace the Porsche’s hexabelts and mouldy wheel, I trumpet away in the Benz.

Eat your heart out, Taylor Swift – this is reinvention. An entirely new, bespoke platform, outfitted with all of Mercedes’ latest luxury and anti-crash whizzbangs, shelled with a 121mm wider but utterly faithful G-Class body. Only the door locks are shared with the veteran – plus their rifle-bolt operation sound – but the military-bling chic has been preserved intact.

Perched teeteringly high in a multi-motorised throne, you lord it over incongruous S-Class widescreens and archaic indicator turrets. The scuttle is shallow, the windscreen a flat insect graveyard. For the first time, there’s space for both elbows, and burrows to charge your smartphone – much more important to most owners than discovering those three toggles operating locking diffs. Lurking next to your knees, more buttons, this time familiar from AMGs without altitude sickness. Buttons that stiffen the suspension, uncork the four side-exit pipes, and inject caffeine into an AMG GT R’s 577bhp heart.

The old G63 received detuned V8s because its chassis could barely tolerate a crosswind, but there’s no attack of Der Sensibles here. This is perhaps the quintessential AMG experience, and the finest-sounding car on Speed Week. Flatten the throttle and the thing rears up, snorting, nose jolted to the sky, spare-wheel housing skimming the tarmac. Don’t for a second think it’s grown up all accurate – there’s more play in the steering than a Sixties Hollywood car chase, the traction control has the tolerance of a Victorian schoolmistress and the brakes achieve half as much retardation as the mighty aerodynamic drag.

I presumed I’d hate the G. I thought it’d be a vacuous, overmuscled anachronism; Dan Bilzerian on diamond-cut wheels. But despite its sordid vulgarity, it’s infectiously glorious. Shockingly comfy, too. Mentally noting to shotgun it for the dreary French autoroutes, I sidle over to the M2. 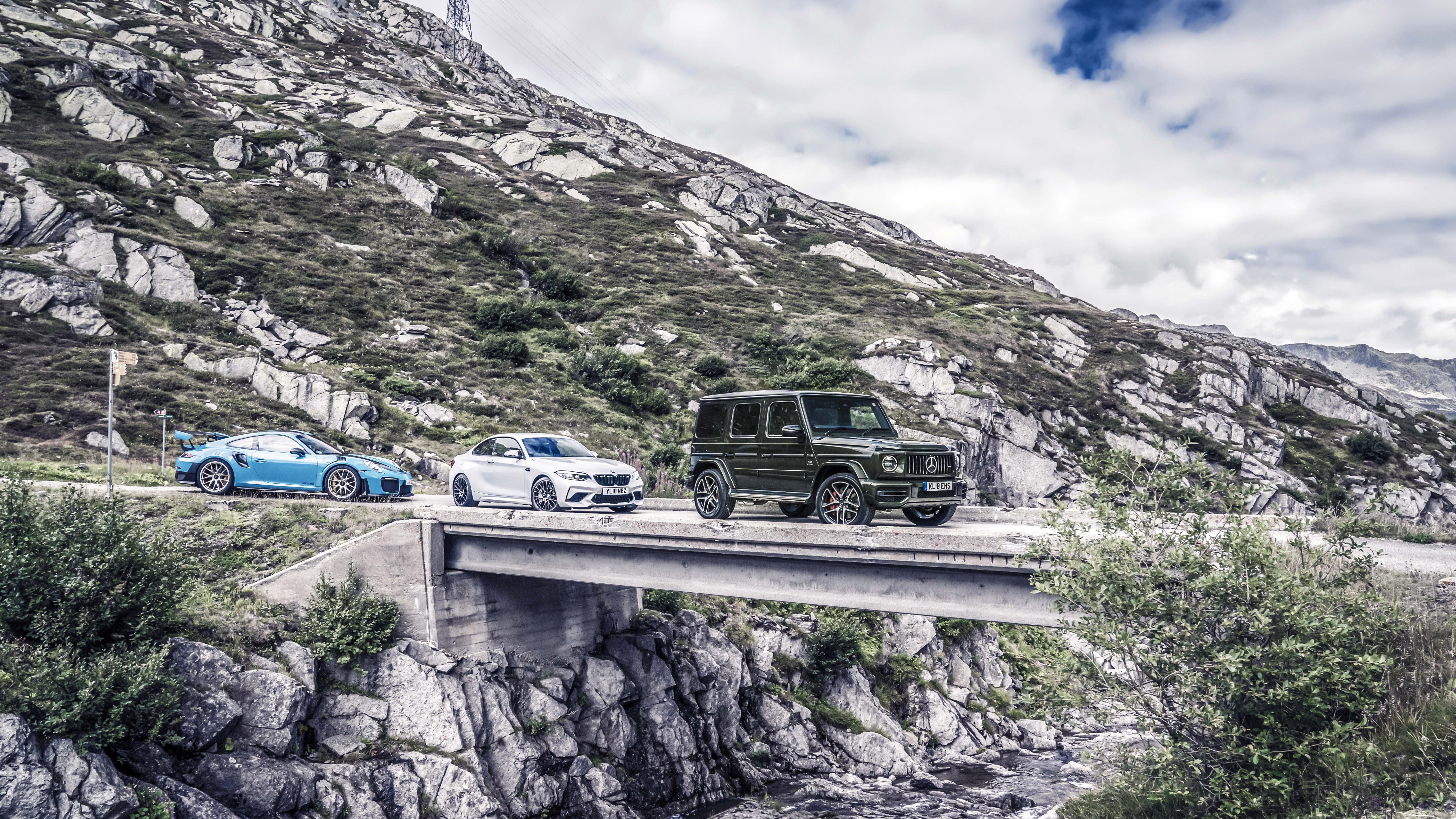 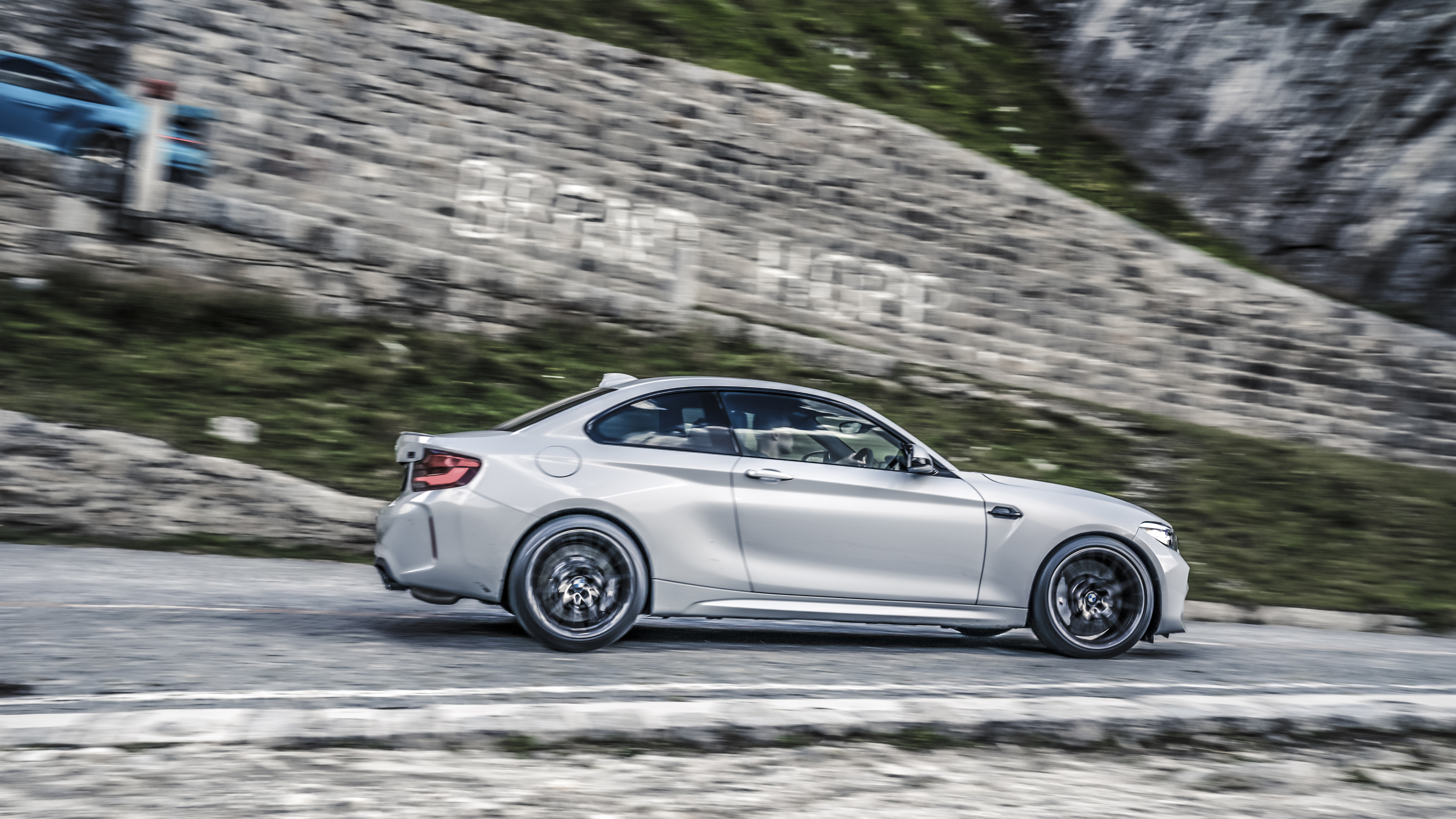 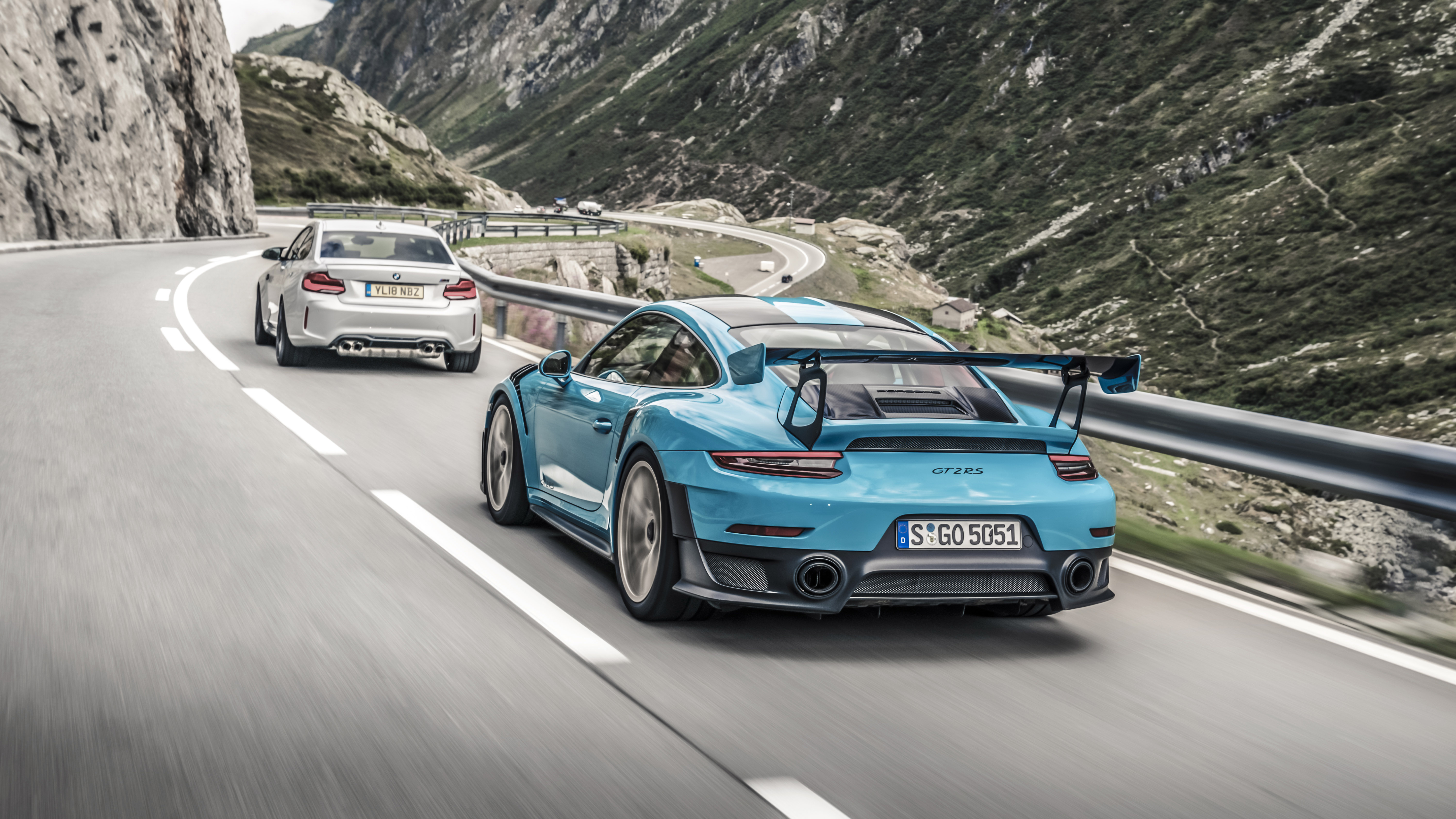 We’re on the classic Gotthard now. Narrow, low-friction, and tricky to sight. A baby M car should be Goldilocks here.

But hang on. The new M2 Competition is basically a jumped-up 1 Series fitted with the 3.0-litre, twin-turbo S55 engine from the M4, plus its carbon front brace to tighten up the turn-in. The current M4 is a vindictive bastard. Allowing its engine to chuck 404bhp and 405lb ft (up 39bhp and 36lb ft from the M2) at a shorter wheelbase is an unedifying thought when the drops off the edge here are measured in minutes, not feet.

Needn’t have worried. The Comp vindicates this engine – it’s the M4’s shunty gearbox and diff that make it a puckering dalliance in the wet. Even with a £2,125 paddleshift ’box that we’d happily swap for the cash and the auto-blipping manual, the M2 is friendly and faithful. It does indeed enter corners with more bite, and the throttle response is palpably crisper. It even sounds more authentic than any M car of the last decade. For my money, it’s the best M since BMW went turbo – less bludgeon, more balance. Not so scary after all, even for a Warmduscher – ‘individual who can’t tolerate cold showers’.

Three remarkably old-school cars, then, all punching way above their weight. A golfer’s coupe playing hypercars, a 400bhp hatchback in a dress, and an army wagon masquerading as Kendrick Lamar’s wristwatch. Without due respect, each one is lairy enough to zap your pulse. But let’s at least kaput the myth that Germans have no sense of humour.

Pick up the new issue of Top Gear magazine here 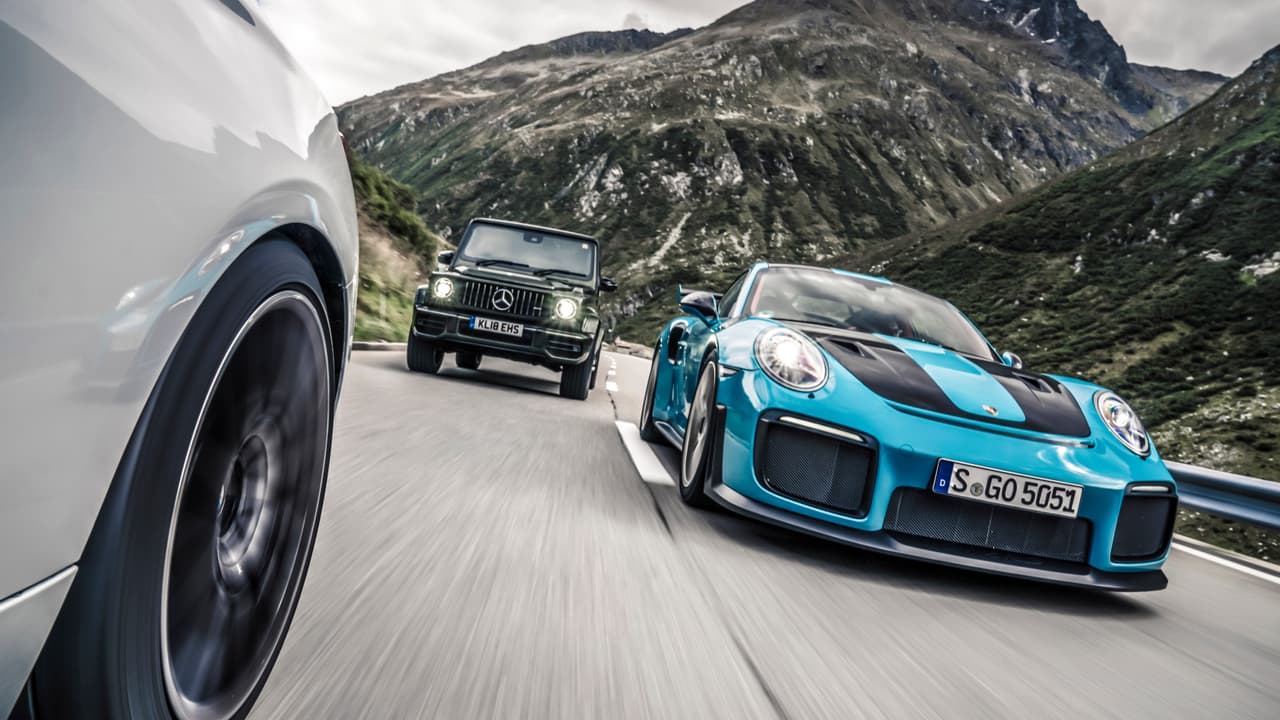