Speed Week 2022: a road-trip across Europe to the Autodrom Most circuit | Top Gear
Advertisement
Big Reads

Speed Week 2022: a road-trip across Europe to the Autodrom Most circuit

Sometimes, taking the scenic route is the only way

Not safe. Not safe. Not saaaafe. Two words chanted through clenched teeth and with increasing intensity as snatched glances reveal the speedometer in the centre console flickering itself above 125mph, as if nervous about what the next digit might bring. The front tyres are skinny but resolute, chattering away back down the steering column and into my locked forearms where tendons are trying to seek shelter somewhere behind my elbows. The single rear wheel is bouncing across expansion joints and leaving the road, and the lack of aerodynamics of any particular sort means that the wind rush has grabby little fingers under the chinstrap of my helmet yanking it backward. We manage an indicated 128mph until a car appears on the horizon and I back out, an excuse that happily allows my ego some room for manoeuvre.

Adrenaline flood, tingling nerves and four more words: Not. Doing. That. Again. Holy hell, what a rush. Now obviously, 128mph isn’t actually that fast in the big scheme of things – most modern hatchbacks will crack 130. But in a Morgan Super 3 with 118bhp and an aerodynamic profile that includes the shape of your own head, it might as well be escape velocity for this universe. New aluminium structure and 1.85m front width or not, trying to hit the car’s 130mph top speed is for the brave or foolhardy. And I’m not particularly brave. 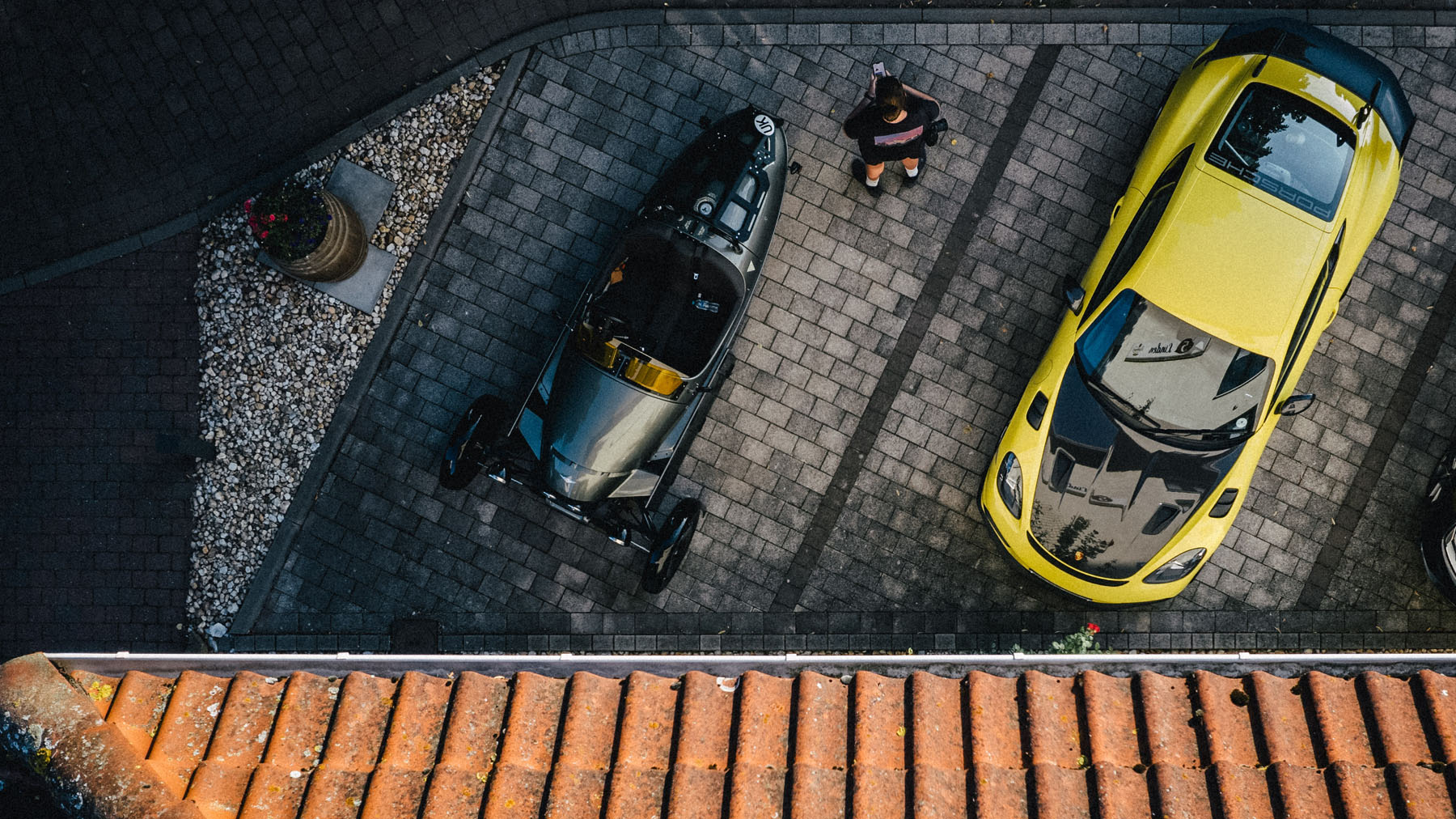 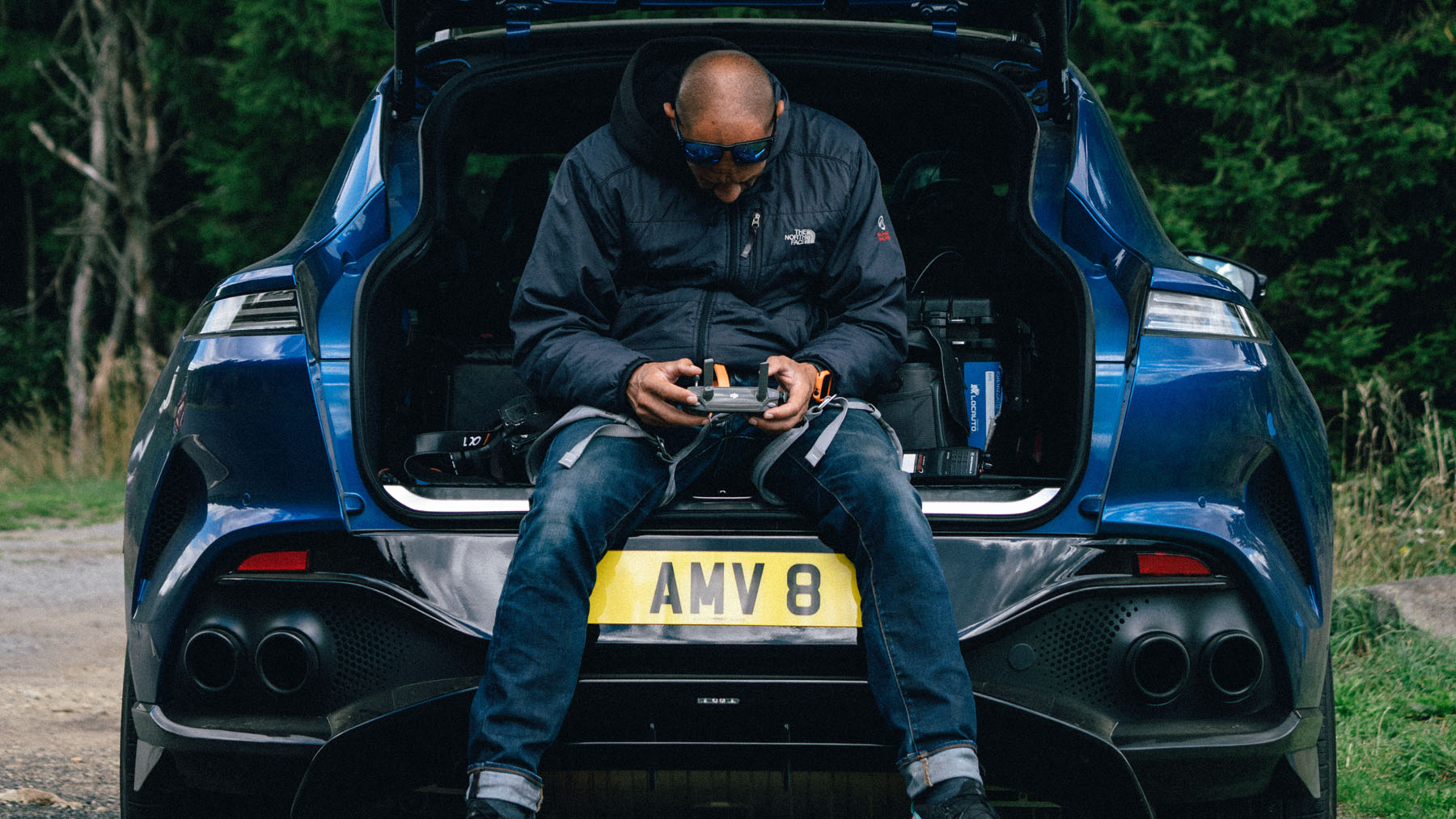 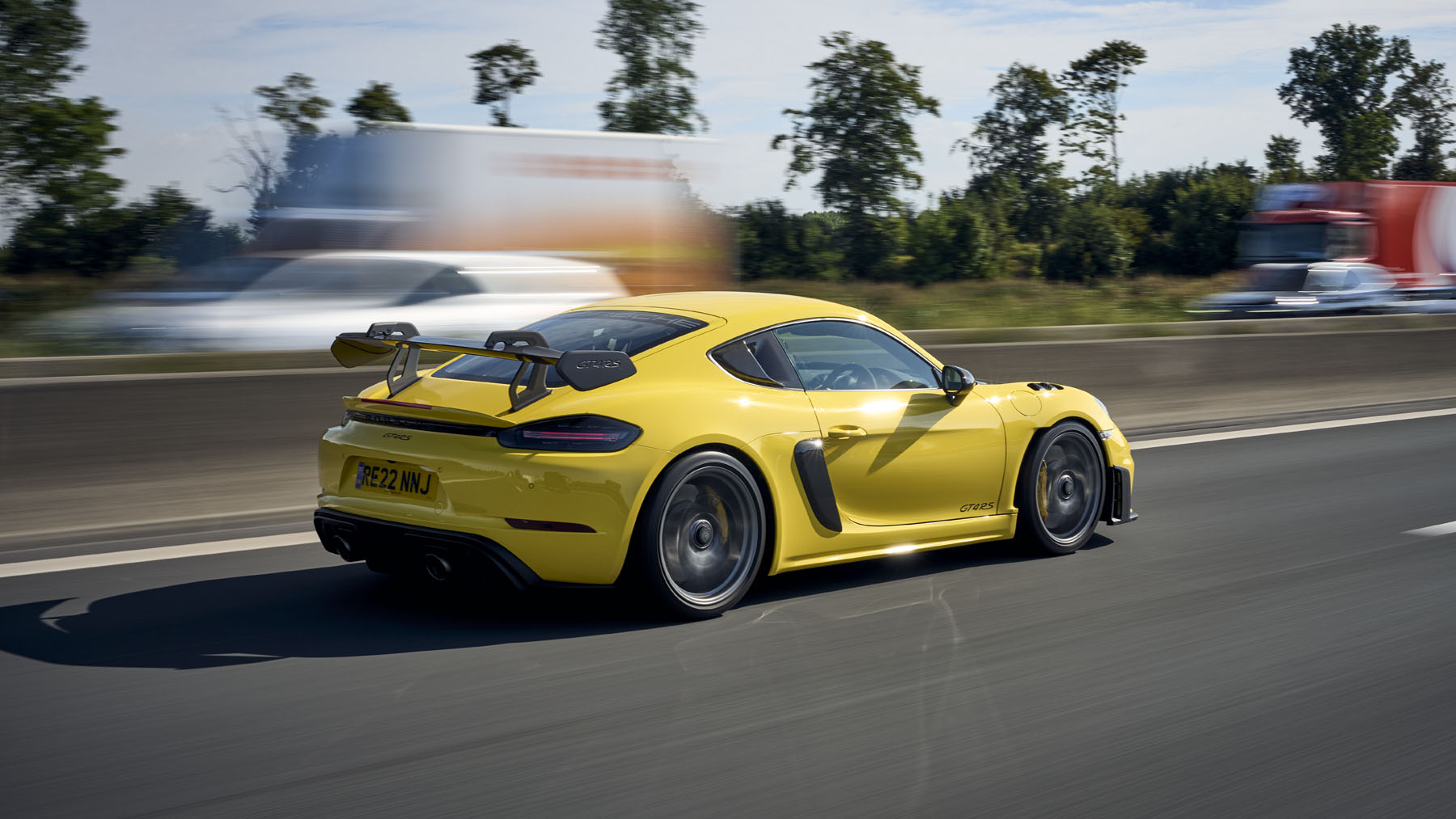 It is at this point Jack Rix blows past somewhere north of 160mph in an Aston Martin DBX 707. A possibly conservative estimate, given that I’m still doing 100+mph. The deep blue leviathan bellowing like a startled bull, still accelerating. In the brief blur of movement, I see him utterly relaxed, possibly listening to some sort of podcast and apparently eating crisps. Fast? It depends on context. 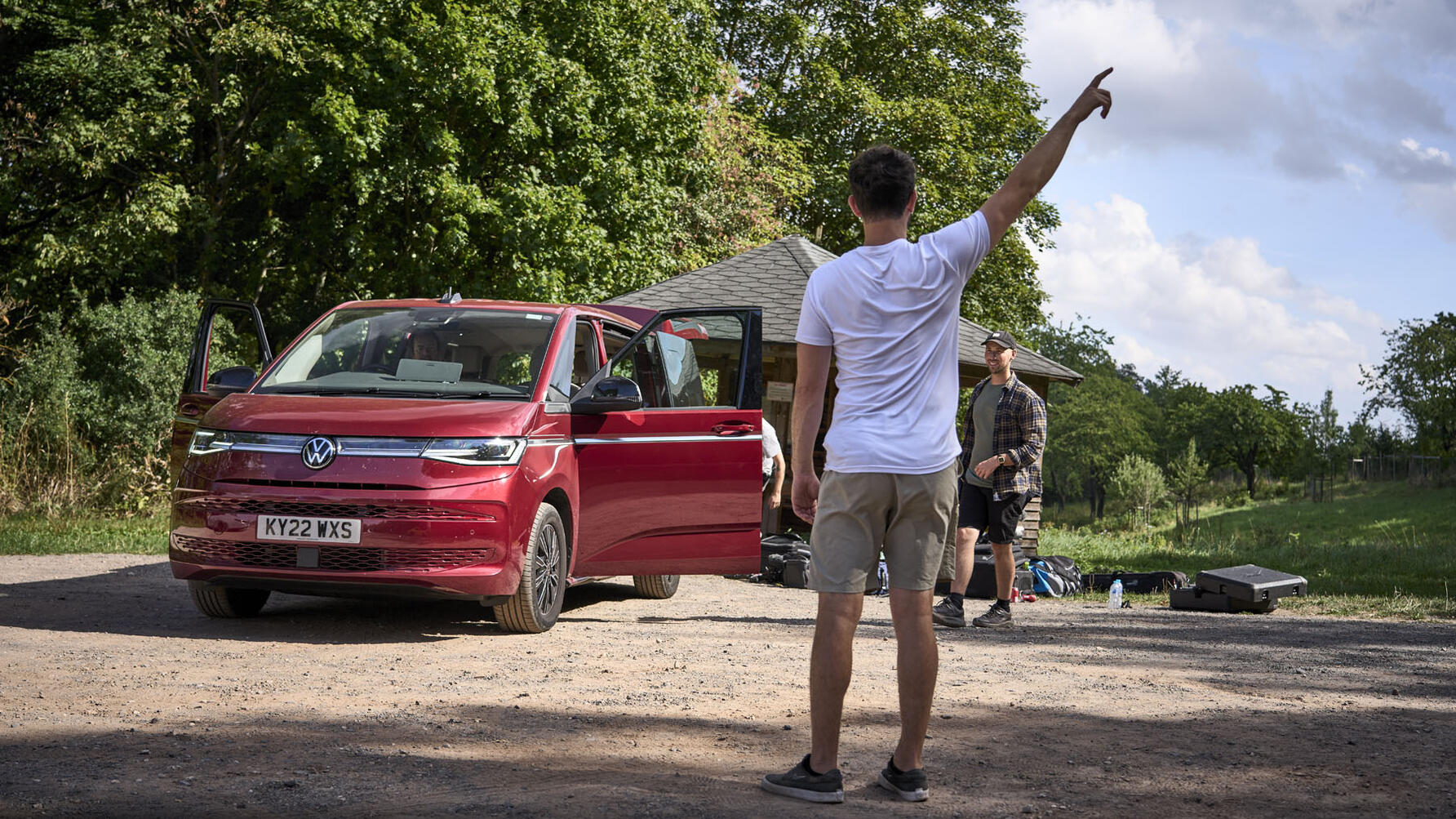 And so, let’s look at that context. It is only on Top Gear’s Speed Week that you can say that 128mph in a Morgan three-wheeler is more exciting than 181mph in a Porsche Cayman GT4 RS without people laughing their heads off and calling you some sort of fantasist. It is also only on Speed Week where someone else will then immediately provide photographic evidence of nearly 189mph in said Porsche, neatly bursting your bubble. Thank you, Rowan Horncastle. But that’s why we’re here somewhere in rural eastern-ish Germany, seeking out lightly trafficked stretches of derestricted autobahn and giving these cars their respective heads. It’s quite the eclectic convoy.

Of course, it started some months ago with feverish planning and complicated spreadsheets, ending up in a grey dawn’s half light in a car park just outside the Channel Tunnel. Jack in a DBX 707 sporting a full set of extra tyres, a glint in his eye and enough snacks to give continental Europe diabetes. Ollie Marriage in an eye-searing yellow Porsche GT4 RS, Greg Potts in the Morgan and me in a blue Audi RS3 saloon, feeling like I’d turned up wearing a business suit to carnival. Others would be picked up along the way, or would meet us at Autodrom Most in the Czech Republic tomorrow. Support cars – a Land Rover Discovery 4 and VW Multivan – were packed with photography kit and family packs of Haribo. Coffee was unceremoniously shotgunned. The Morgan immediately threw up a warning light almost as if panicking about what was to come. Game on.

It probably sounds like a long way to drive, but Most is only some 650-ish miles from Calais via some decent bits of German infrastructure, so we decided to make a trip of it and stop off in Germany, picking up Ollie Kew, who had tottered off in a huge display of self-sacrifice to pick up the BMW M4 CSL. But to get to our rendezvous, we had to motor a little bit. The first surprise was at the Eurotunnel entrance, where we found a last-gen Morgan three-wheeler. And another one. And another. In some bizarre twist, a good chunk of the Morgan owners’ club was on a jaunt down to Monaco in roughly 12 S&S vee-twin versions, making our new three-cylinder Ford Super 3 look like it had awkwardly stumbled upon a secret family gathering. A few chats about the slicker looking new one and a brief pause and catch-up in the tunnel and we were away. 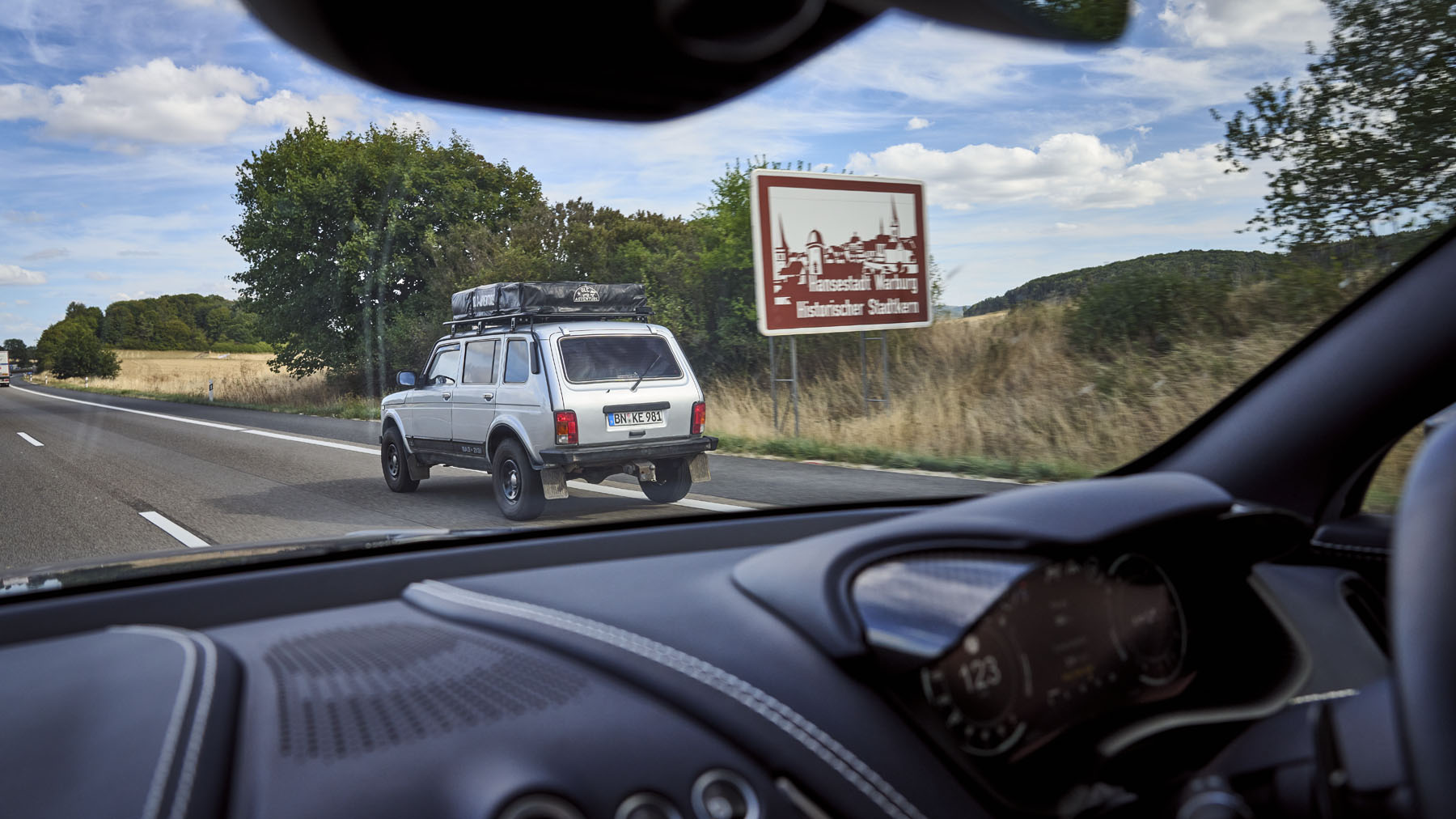 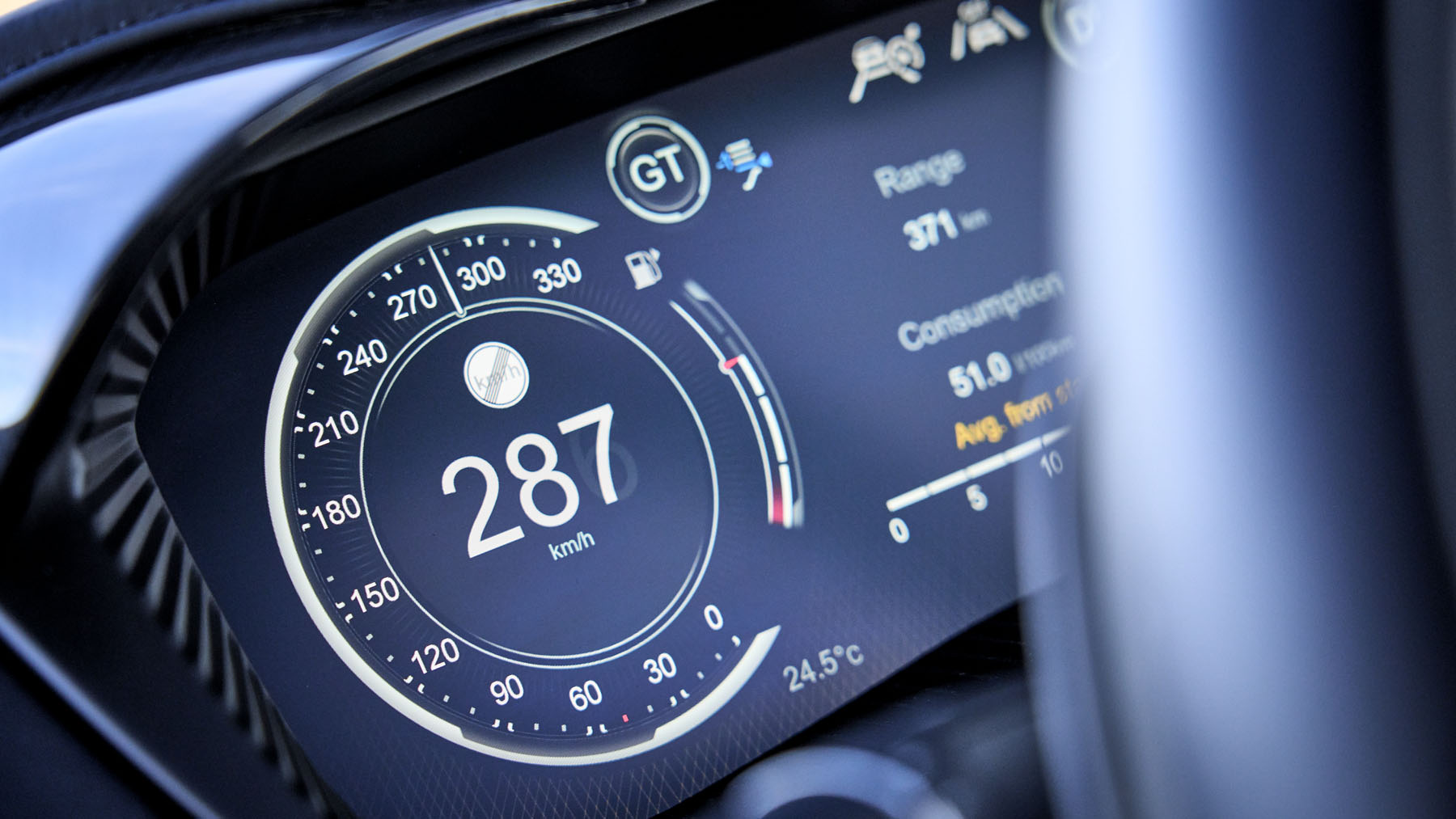 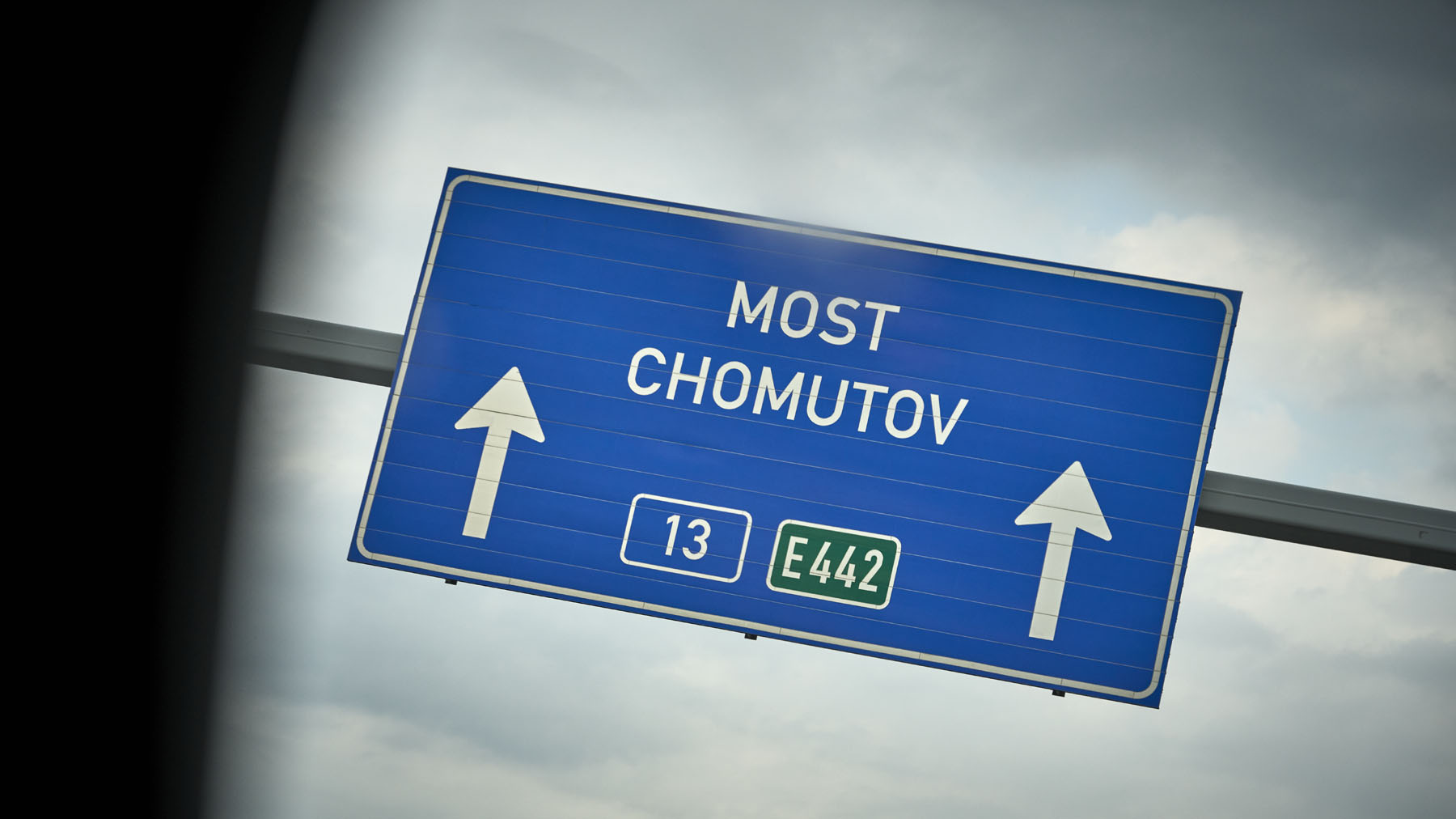 The first part of the trip was, it has to be said, pretty mundane. A gentle eight- or nine-hour run taking in a sliver of France and left into Belgium toward Antwerp, tight controls on speed limits and happy cruising. The RS3 was utterly pleasant, pottering along and returning nearly 40mpg. Not bad for a turbocharged five-cylinder with nearly 400bhp. The DBX imperious, the Porsche almost bored, always looking for a place to clear its throat with revs. Greg looked like a rubbish bank robber, decked out in full ski mask and wrestling the Morgan down autoroutes at 80mph. Just following him was intensely amusing. Still, somewhere in Germany pity was taken, fuel was needed, we all swapped cars, and I found myself in the Morgan.

The next chunk is a bit blurry, to be honest, and where we started this story. There may have been signs for Dortmund and Kassel, a brief, lonely section just after where every single car simply spurred away on one particular section of autobahn, leaving the Morgan all on its own. More stops, more swaps. Rowan Horncastle jumped into the Morgan and left a rest stop like he was being chased, only to be pulling into the next rest area worried that the little three-cylinder was only actually running on two. After 10 minutes of fretting, we switched it back on and the warning lights and misfires had once again healed themselves. Like magic.

But where the Morgan was proving plucky and tireless battered into a cross-country run, the other cars were revelling. The DBX would simply sweep through its speedometer with the rumble of distant volcanic activity and only slowing above 175mph, where, one assumes, aerodynamics passed harsher judgement. The RS3 ran happily at more than 150mph, stable, confident and capable, the only sound the endless white noise of tyre on tarmac. But the Porsche Cayman GT4 RS was a revelation. Reactions sharp as winter, impressions of intent immediate. The induction noise may be directly piped into the cabin, and the exhaust may be tuned to raucous, but there are very few places where you can change up at 9,000rpm through most of a gearbox without being on a very big track, or risking some downtime in a two-star police hotel. And it makes the hair stand up on the back of your neck every single time. If one car immediately became a front runner, even on the bare palette of a mostly motorway journey, this was it. 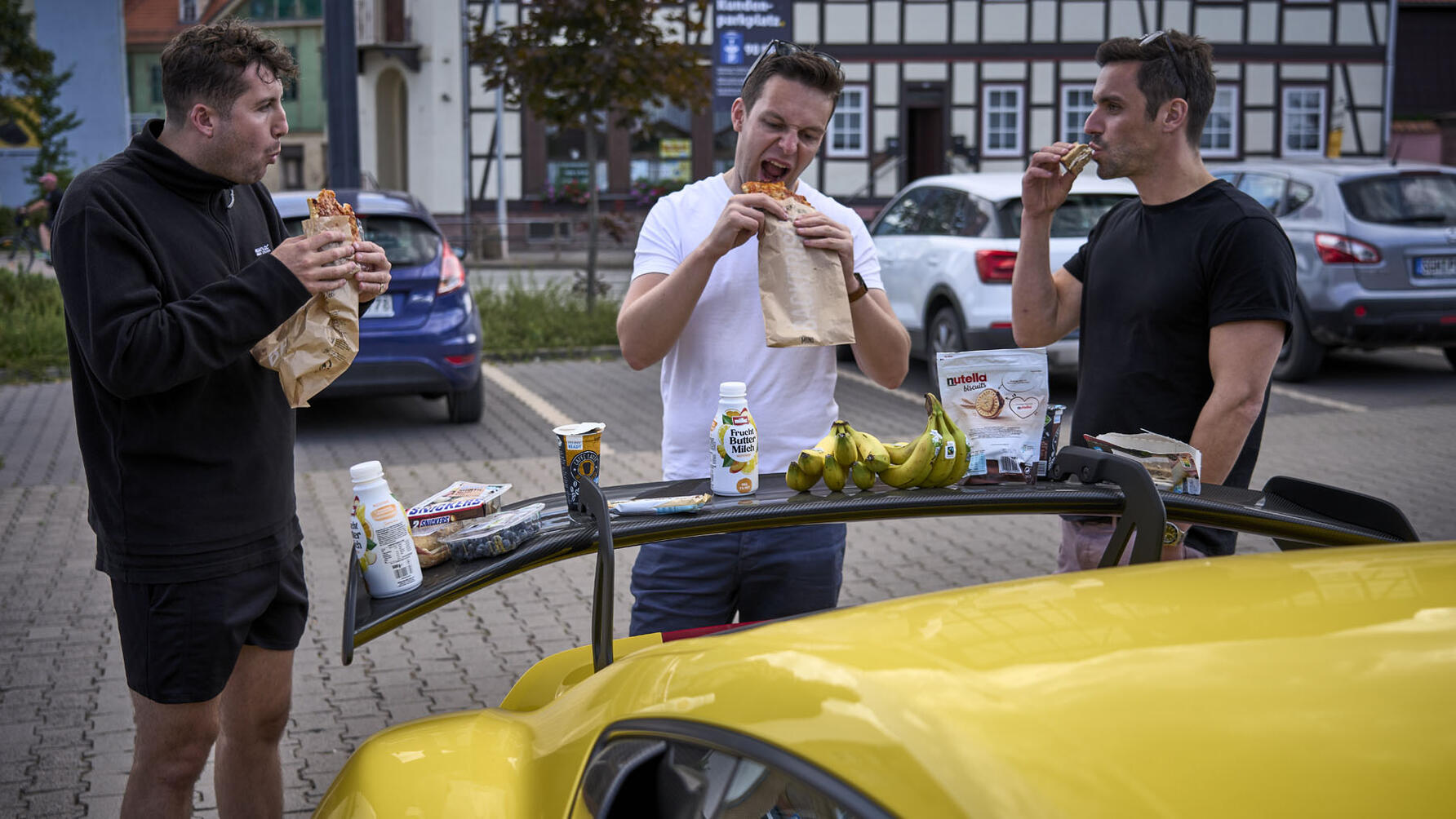 Soon enough, after a few stops and a nice round 500 miles, we headed off towards our hotel on the eastern side of the Südharz municipality to meet Kew in the BMW M4 CSL. The, erm, very visually insistent M4 CSL. A legendary nameplate applied to a relatively heavyweight M4 covered in CSL badges and liberally applied stripes. A car with lightweight carbon seats and incongruous light-up badges. I hated it on sight, and Ollie’s laughing insistence that we all try and get into the car with any sort of grace proved my suspicions correct – a car forged as much by marketing as engineering.

Before dinner, we set out to have a small recce of the local roads, ready to take some pictures the next day. And despite being weary, one or two cars became three, became four, became the whole crew. And what glorious roads. Germanic efficiency in terms of construction allied to artistic interpretation in terms of direction. Swooping whips of tarmac linked by short straights, sighted and unsighted, elevation changes and generous cambers. The Morgan was a delight, roaring through corners, the driver elbows akimbo, wrestling the car into some semblance of a racing line. The Porsche surgically dissecting each corner with a wail of revs. No place to hide in that one. The DBX? It never felt any less than it was, a hugely powerful SUV with enormous grip and a lane-filling physical footprint, but every single person that got out of it did so with a nod of respect. And the RS3 was deliberate and complimentary, the kind of car that coddles speed and looks after you, whether you know which way the road goes or not. The M4, annoyingly, was also... impressive. Torque, grip and a precision that belied its weight. But let’s keep that between us. 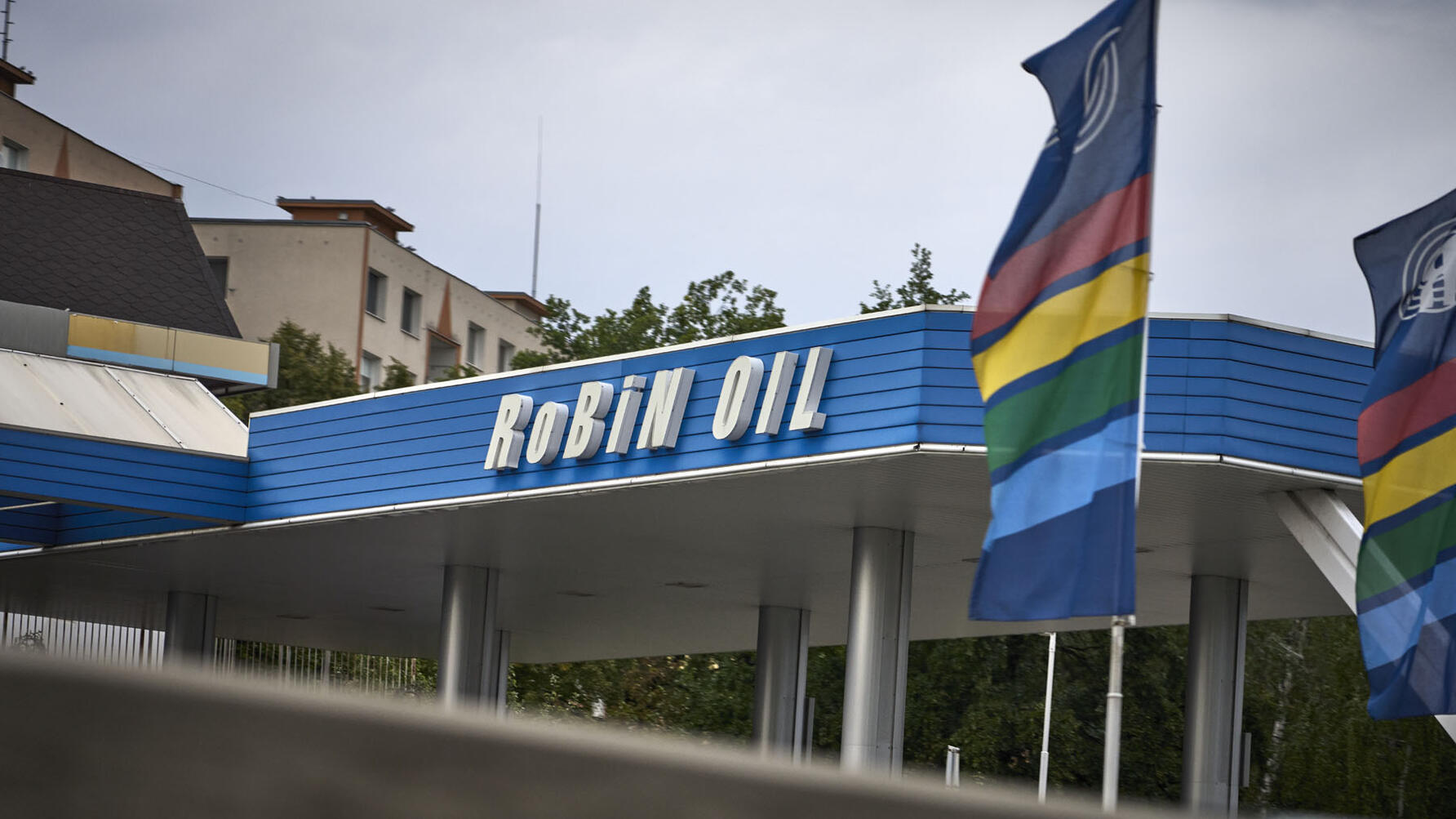 A dinner, a bed, and the next day the whole convoy fired itself up bleary eyed and went to take lots of pictures before pointing ever east and a bit south. Some sort of right veer near Leipzig in Saxony, itself some 100 miles southwest of Berlin, a sandwich and more coffee. And as the derestricted sections of autobahn grew more frequent and less populated, as did the forays into the upper reaches of the cars’ rev ranges. Suffice to say, there were a few wincing petrol station receipts, especially for whoever happened to be in the DBX come fuelling time. But eventually, we ran past the Czech border, headed into Most and fired ourselves towards the Autodrom.

Dusk at the top of the Autodrom Most hill, the track wound tight beneath us and several cars ticking and cooling behind. Arrayed in front, the rest of our contingent. A Maserati MC20. A McLaren Elva – sporting a weirdly disproportionate windscreen – and a Ferrari 296 GTB wearing what looks like blue lipstick. An orange Lamborghini Huracán Technica. And as we watch a random track day in Czech Republic wind down on what appears to be a fast and technical circuit, and take a look at the metal we have to play with over the next few days, more than one or two of us start to feel that tingle of trepidation. And excitement. Welcome to Top Gear magazine’s Speed Week. It’s time to get serious. 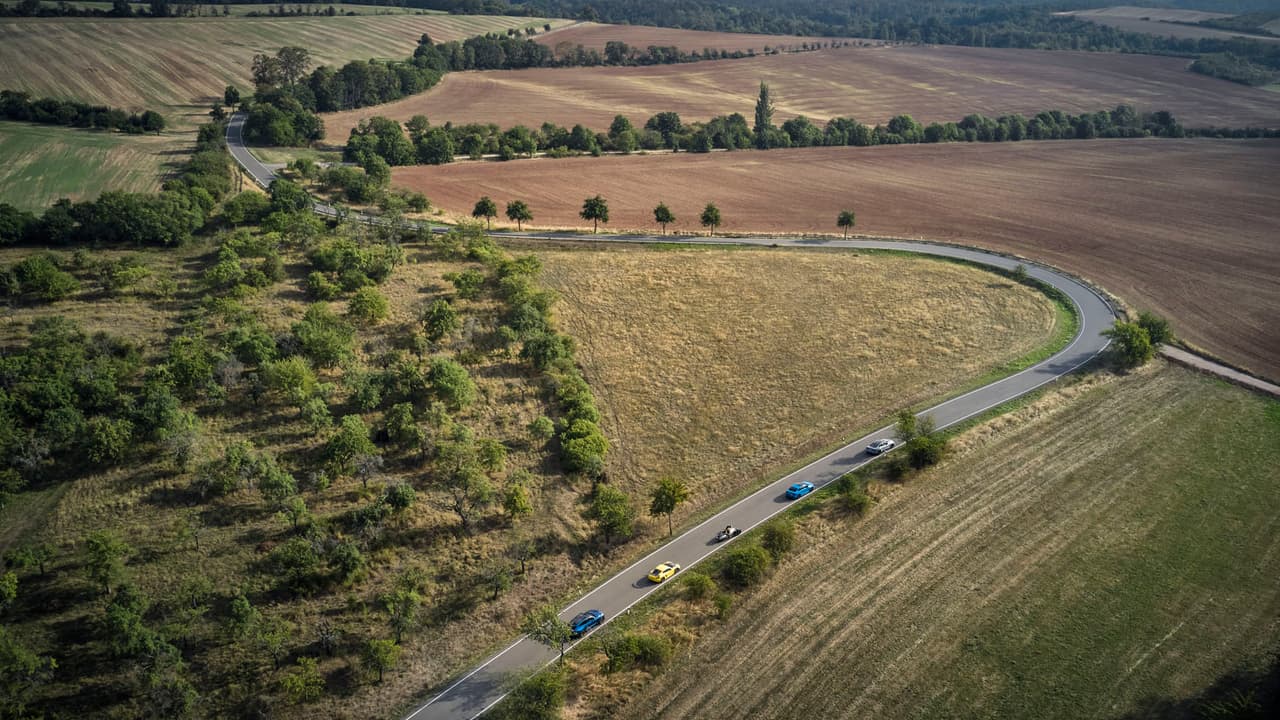