Petrol A45 AMG takes on electric Model 3. Now, who turned out the lights?

High above Portimão’s main straight, a handful of glow worms try their best to cast light over proceedings. The plan had been for the racers to run deep into the night, to have the full Le Mans experience. But the VW ID.R has even less illumination than Portimão. The Porsche 935 has enough for both – its LED light beams are extraordinary – but in the dark that would leave the ID.R tooling around in the wake of a vastly slower car. And I do mean vastly. And I am talking about the 935.

So the racers were pulled in, much to Chris Harris’s chagrin, and this test got an early call up. Since the ID.R managed only three fast laps at a time before needing a full “is the air crackly around here?” recharge, I’m intrigued to find out how long we can sustain max attack in a Tesla Model 3 Performance. Actually, that’s not what matters – it’s how fast spent energy can be replaced. The Mercedes-AMG A45, recharged by Repsol, can be back on track inside of three minutes. With no convenient Supercharger, the answer for the Tesla is likely to be “dawn”. 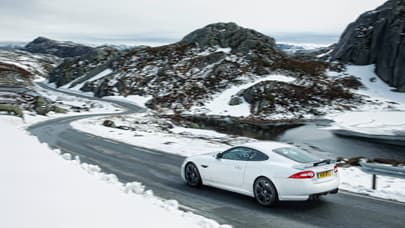 From the archives: TG drives the Jaguar XKR-S in Norway

Now, on to more serious business. Earlier this year we pitched a Model 3 against BMW’s M3 and tested the objectives (acceleration, braking, lap time). To no one’s great surprise, the Tesla won. Now it’s time for the subjectives: is an electric sports car as much fun as a performance petrol?

Forget any other test we do here – this one has the most bearing on the future of the performance car. Why? Because electric is here and it really, really works as a means of transport. But I’ve yet to drive an electric car that can do anything other than thrill in a straight line. OK, there’s the VW ID.R, but it hardly counts. So the Model 3 has some impressing to do. It’s a simple car, though, and that usually means simple pleasures. One electric motor per axle, the rear delivering more power than the front (283bhp plays 197bhp). Torque-vectoring between axles, but not individual wheels, as there are no limited-slip diffs. Instead the stability systems can apply individual brakes to maintain traction, tighten lines and so on. Track mode also ups the regenerative braking and boosts cooling of the battery pack. 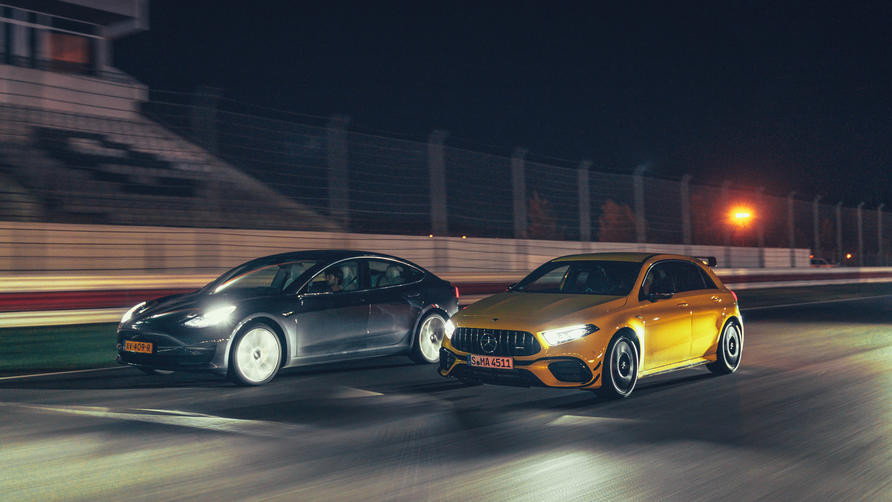 Compare and contrast with the AMG A45. There’s an awful lot going on here: an engine with three separate cooling water pumps, a turbo cooled by water, oil and air, a four-wheel-drive system with a mechanical diff at the front, but electronically controlled clutch packs at the rear, an eight-speed, multi-clutch gearbox and enough processing power to juggle all this and still have room for Drift mode.

In fact, both claim to be able to ‘do oversteer’. As if that’s the key to unlocking driving thrills. Try it on the public road and you might find it’s actually the key to locking you up. Neither is particularly good at it: I give the Tesla a massive Scandi flick, which massively upsets the still-active stability control, and discover it will only really let you slide under its own governed parameters – a brief skid coming out of corners under full power. The Merc is – inevitably – more complex: apply masses of lock, followed a fraction later by all the power. The full ham fist of cornering. This tells the A45 a complete legend is now driving, so it should send the majority of power to the back axle, kicking it wide and making you counter-steer. However, if the complete legend now enjoying his dab of oppo should get creative and attempt to alter his line with steering or throttle, the system decides you’ve had quite enough and pulls you straight. Pub boasters, the pair of ’em. 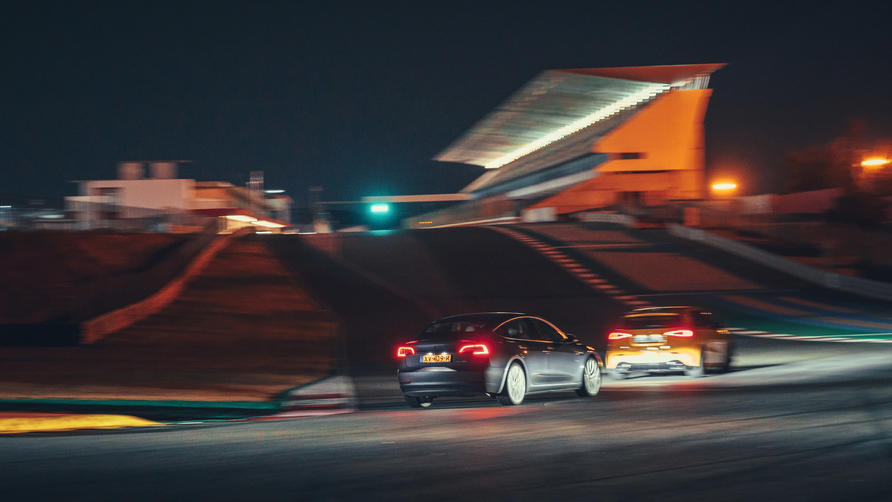 I settle for doing some swift, secure night laps, as it’s more relevant and rewarding and contains less chance of me travelling backwards into a darkened gravel trap. Both cars excel in the same part of a corner: the getting out of it. In the Tesla, the electric motors are really well set up for providing excellent traction and thrust away from slow corners. And, actually, if you’re precise and smooth and allow roll to build progressively, you can get it into corners quite nicely. The algorithms that manage the throttle pedal are sharp and precise without being snatchy – you need this because the seats are too flat, so you find yourself sliding around, which could lead to jabby inputs – and then you get to a faster corner and find yourself gripping the steering wheel very tight, because you don’t quite trust what the Model 3 is going to do. Highspeed stability is not its strong suit. It starts to feel heavy, soggy and wayward and you’re not getting the information through the nervy steering and chassis that you need to have confidence.

The lighter, tighter Merc is much better at high speeds. There’s more sense of grip coming back to you through the chassis and steering. It’s just a bit of a weird one at lower speeds. The front end feels softer than the rear, and when you clog it out of hairpins, the system directs power to the outer rear tyre, straightening the car up so fast you actively have to pull the steering lock off.

The Merc’s a tougher little nugget, a happier, sturdier lap-pounder

There’s a feeling that neither car behaves entirely naturally: the Merc because of its complexity, the Tesla because it’s not actually locked down enough for track use. The brakes cook within a couple of laps (I’ve yet to drive a single Tesla that stops well), the tyres succumb – those turn out to be the limiting factors, rather than the battery. The Merc’s a tougher little nugget, a happier, sturdier lap-pounder. And it has an internal combustion engine. I’ve avoided mention of it so far, because I didn’t want it to interfere, but there’s so much more to a powertrain than just acceleration. I find the Tesla’s acceleration dull. It’s the same every time. That’s not exciting. In the Merc, you have to work with the powerband, think about when to up or downshift, listen to it.

The interactivity, that’s what I miss about electric cars, the feeling that the car isn’t just a tool for a job, but a companion, a partner. This starts with the engine, the most living part, and extends outwards to the steering, the chassis. Driving is then a two-way flow, a chat, and the more clearly you speak to each other, the better. It was the A45 that gave me emotions – even if occasionally it was frustration rather than joy. Can electric cars get there? Despite their weight, I see no reason why they can’t communicate properly through steering, brakes and chassis. It’s just that the Tesla, for all its strengths as a road car, isn’t close to being a track car. Yet. Come on Elon - and brighter light bulbs while you're at it. 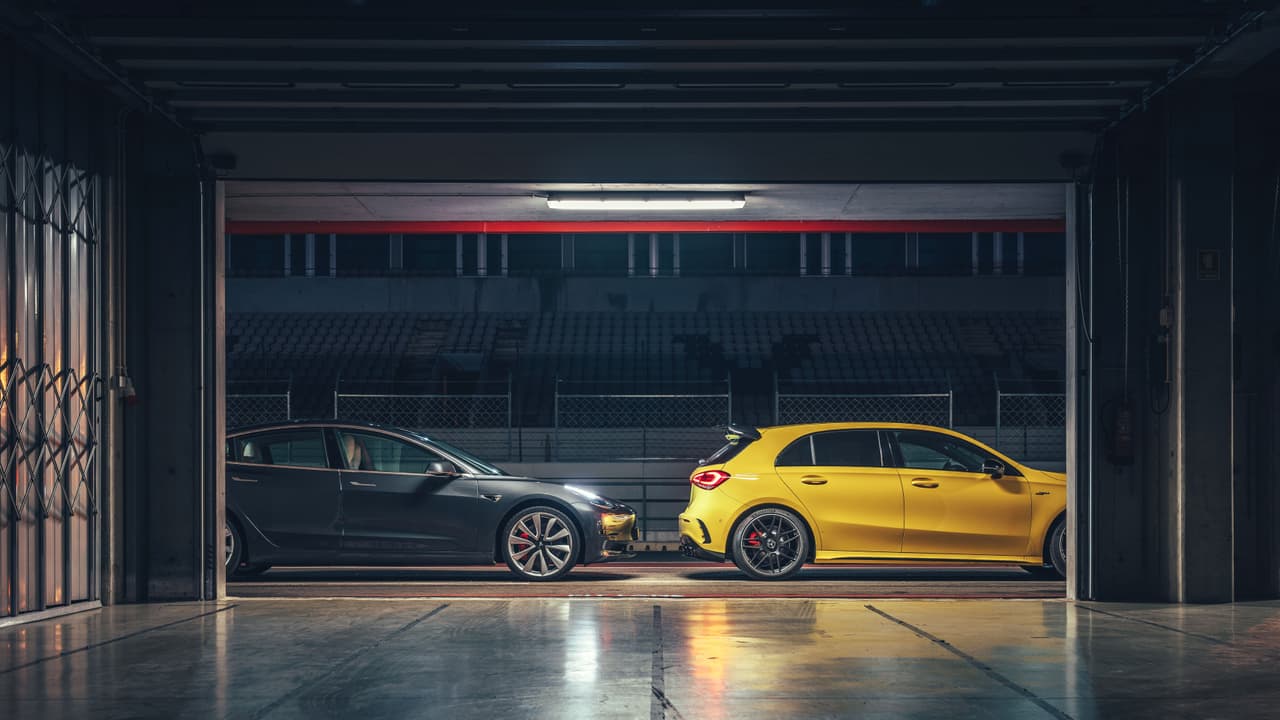