In American sportscar folklore, there is no bigger deal than the Z06. This one's a biggie

What if I was to tell you that later this year someone was going to launch a new supercar with no electric assistance. No hybrid help. No turbos either. And that, in these twilight days of internal combustion, its engine would be the most powerful naturally aspirated production V8 in the world. Ever.

You’d be amazed, wouldn’t you? Perplexed maybe. Especially after you’d just read that Ferrari’s bread and butter supercar can be driven purely on electricity. You’d be wondering which company had the temerity to buck the trend, to swim against the flow of the supercar establishment, which nation would provide the covering fire of sales to enable this machine to escape design studio captivity.

But you already know the answer, because you recognise a Corvette when you see one. And, hard though this seems to believe, later this year you should be able to buy one in the UK. With the steering wheel on the proper side and 670bhp of 8,600rpm, titanium intake valved, non-forced induction V8 firepower and fury. Lamborghini, we can only assume, will be watching closely as it works out the Huracán’s next step.

Thinking those power figures sound, well, wrong? This is not the regular 495bhp Corvette C8. This is the Z06. If the Corvette is America’s Porsche 911, this is its GT3. And in American sports car folklore there is no bigger deal. 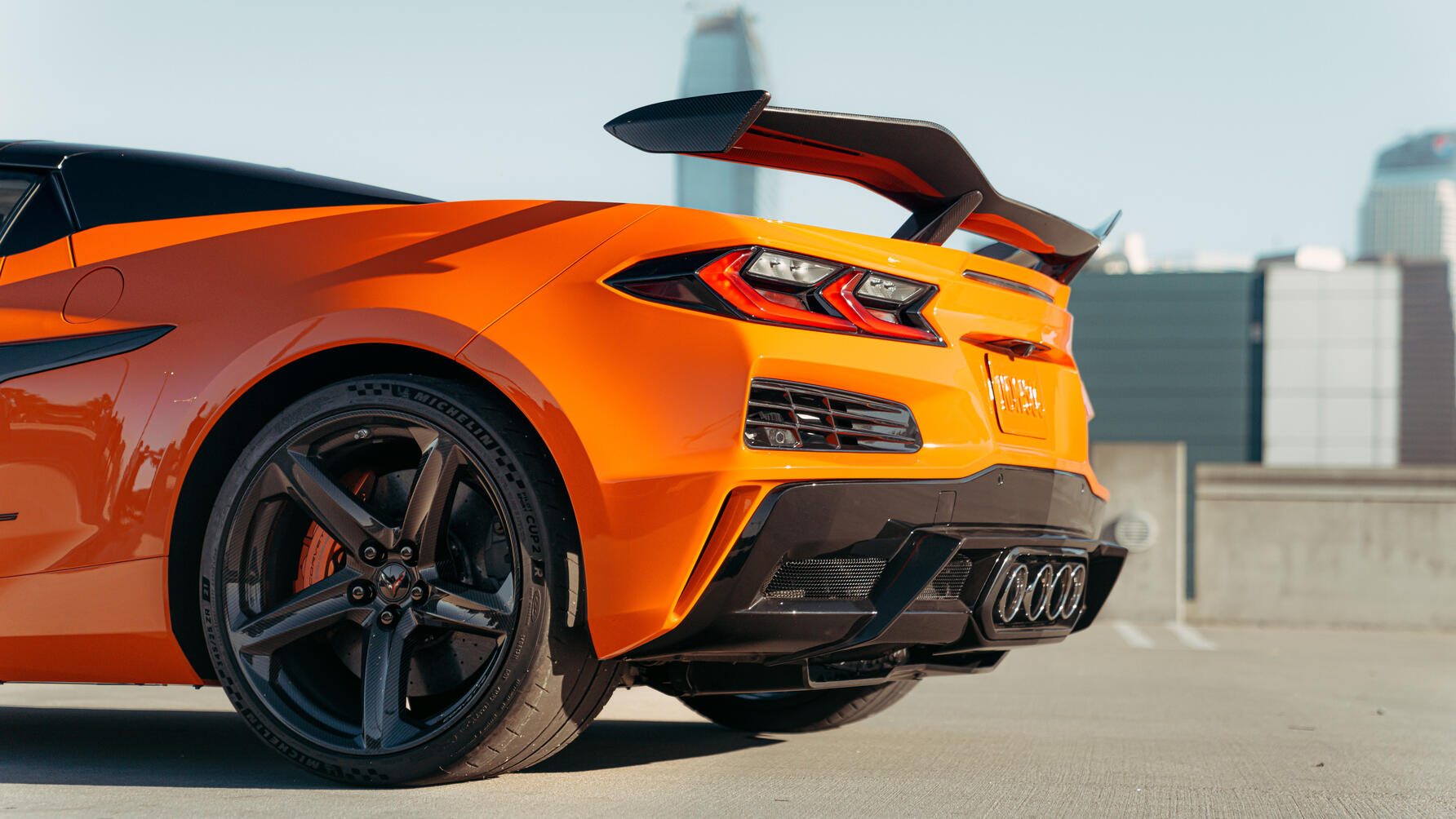 I’m standing on top of a bleached out multi-storey in Los Angeles, squinting against the glare. A T-rex roar under my feet signals the arrival of a pair of Corvettes: a Z06, and a Z06 with a Z07 pack. Think GT3 and GT3 RS. The snap and snarl is lessened above the concrete echo chamber, but not by much. These are brutal, angry cars. The eighth-gen Corvette is the first to put the engine behind the driver, upsetting almost 70 years of horses-up-front history. Vast intakes aft of the doors leave you in no doubt about that. Up to you what you think of the styling. I find it clunky, a bit ‘My First Supercar’, but
I suppose they can be forgiven for that because, well, it is. As a result it lacks the liquid flanks of a McLaren, Porsche’s controlled curves or Ferrari’s historical riffs and refs.

But this is a story of what lies beneath. Because like the GT3, the Z06 motor has nothing in common with the entry model. That uses the famous 6.2-litre small block V8, but lurking in here is an entirely new engine, the LT6. It’s a 5.5-litre dry sump, flat-plane crank V8 taken from the C8R GTLM race car. Good for 670bhp and 459lb ft, it sees off 0–60mph in 2.7secs. Although that includes a one-foot roll-out. 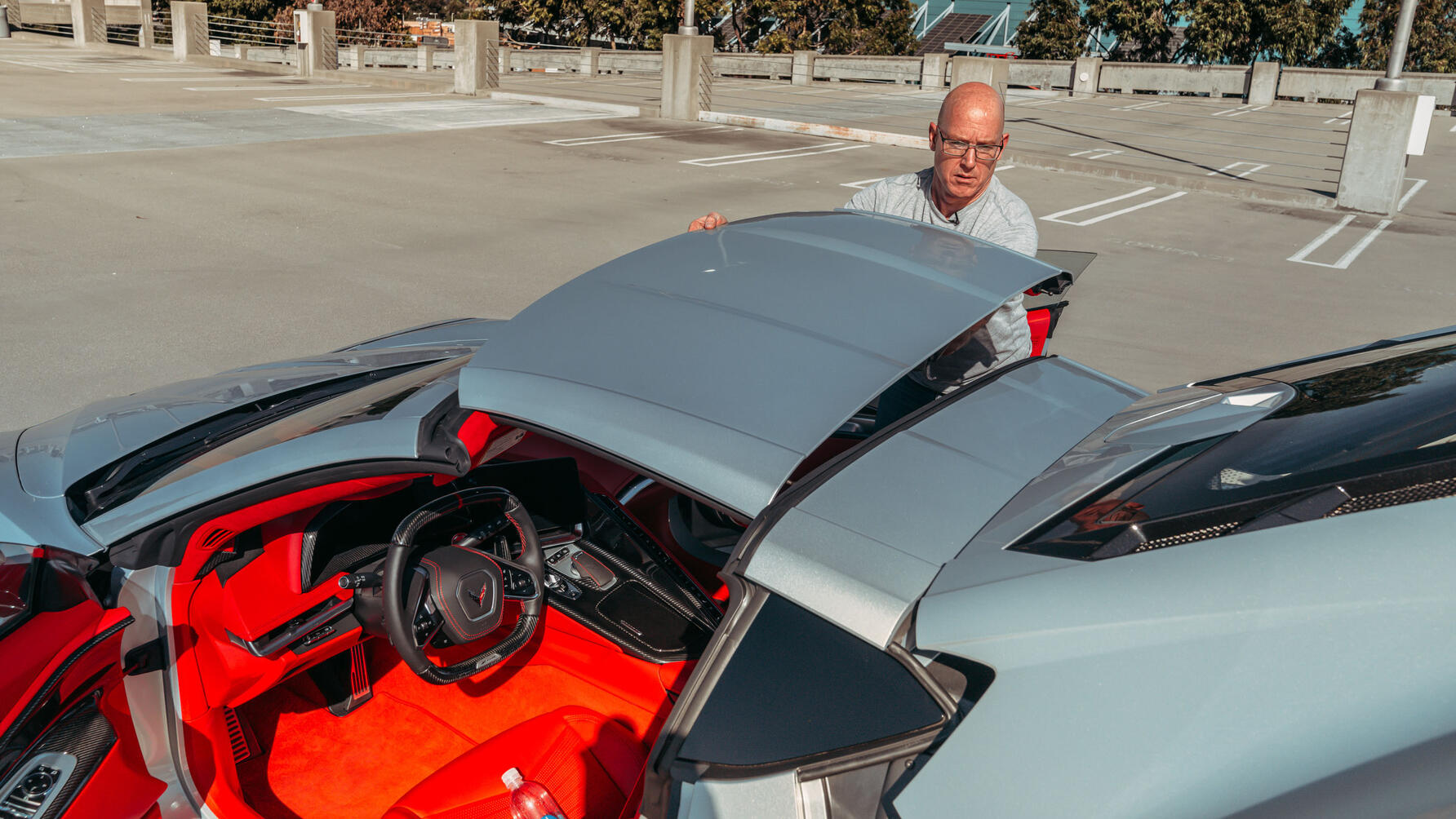 2.  ... AND IT SOUNDS DISTINCTLY ITALIAN

There’s a definite Ferrari-ish tone to the way it fires. Purposeful and fast, no blub-blub-blub here. Pull the D toggle on the console to put it into gear, press M for manual, and pull and hold both paddles: that’s the cheat code that allows you to rev the V8 to the moon and back. The Ferrari analogy holds. It’s not as strident and histrionic as the 458, nor does it feel like it’s putting on an act. It sounds hard and unfiltered, has the racecar purity and speed of response, revs flicking up and dying back in an instant. Still want more involvement? If you like, you can go along to the Bowling Green factory, join the team of 10 or 12 people and help build your own engine. 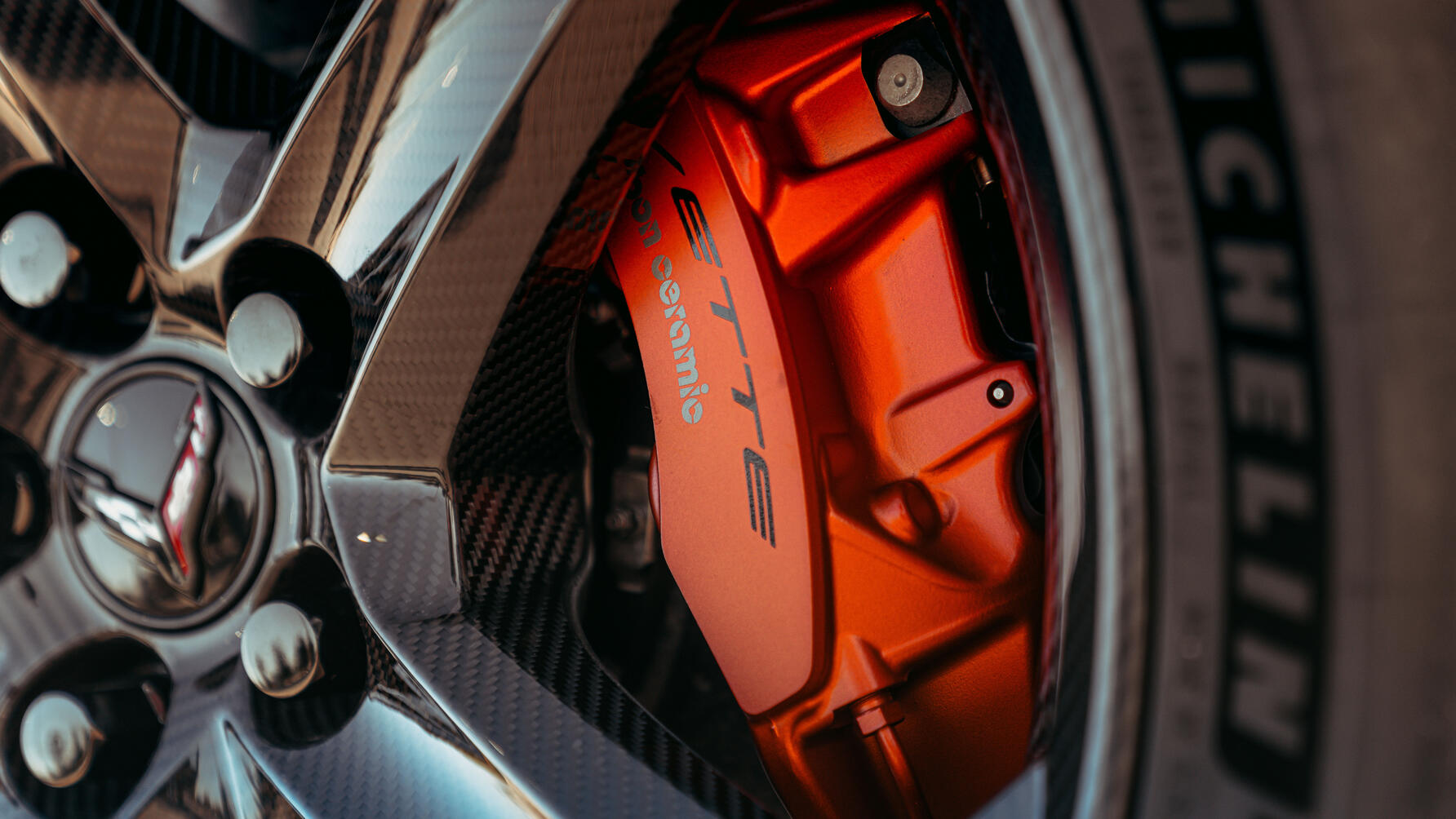 3. THE SUSPENSION, WHEELS AND BRAKES HAVE BEEN... TICKLED

Obviously the suspension has been upgraded, although not quite to the same extent as the V8. The Z06 is 90mm wider overall – that’s a big change, mainly brought about by the fact that to increase lateral grip Corvette has chosen to fit tyres that could roll the turf of SW19. The rears are 345-width, up 40mm from standard and necessitating entirely new body panels to cover them. Bigger wheels and brakes are fitted, the usually optional e-diff and magnetorheological dampers are standard here, the springs are stiffer and there’s a new transaxle with a shorter final drive for better sprinting. 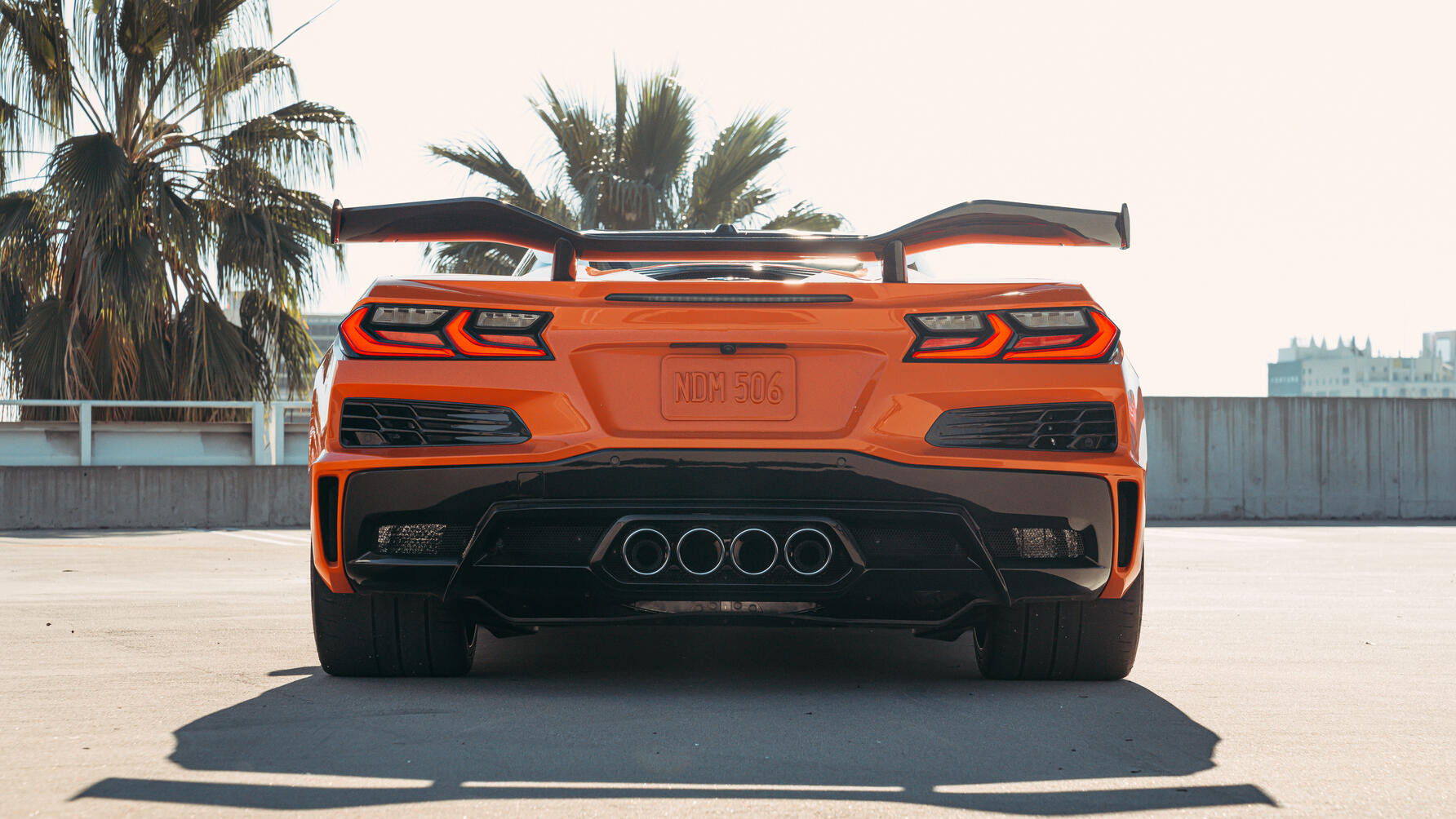 4. IT COMES IN TWO FLAVOURS

The US loves numbers: g-force, slalom tests, 0–60 and all the rest. This has all the raw ingredients needed to ace its SATs. But if you want to make doubly sure, you’ll need to spend more (likely around $10,000) for the Z07 pack. This brings a new rear wing doubling downforce at the 186mph max to 333kg. But downforce at top speed is just a stat – that’s not where you want downforce, you want it at 90–130mph, and due to how downforce works (square roots of something or other) 333kg flat out translates to ‘not actually that much’ at useful speeds. Bit of TG science for you there.

Not a downforce car then. But your money also buys you 15 per cent stiffer suspension, carbon ceramic brakes and Michelin Cup 2R rubber. Even more face-tearing grip. And the option to spend yet more on the carbon rims you see here, saving 18kg. Probably worth it, despite the fact the Z06 isn’t that focused on weight saving. At 1,560kg, it’s 150kg more than a GT3 and retains many of the standard car’s useful attributes. Foremost among them the lift-out roof panel. You can have the Z06 as an electrically lidded convertible (the orange Z07 car you see pictured here) but as standard all Corvettes give you access to the sun. The panel stores in the boot behind the V8, but doesn’t cramp your baggage too much as there’s also a frunk up front. 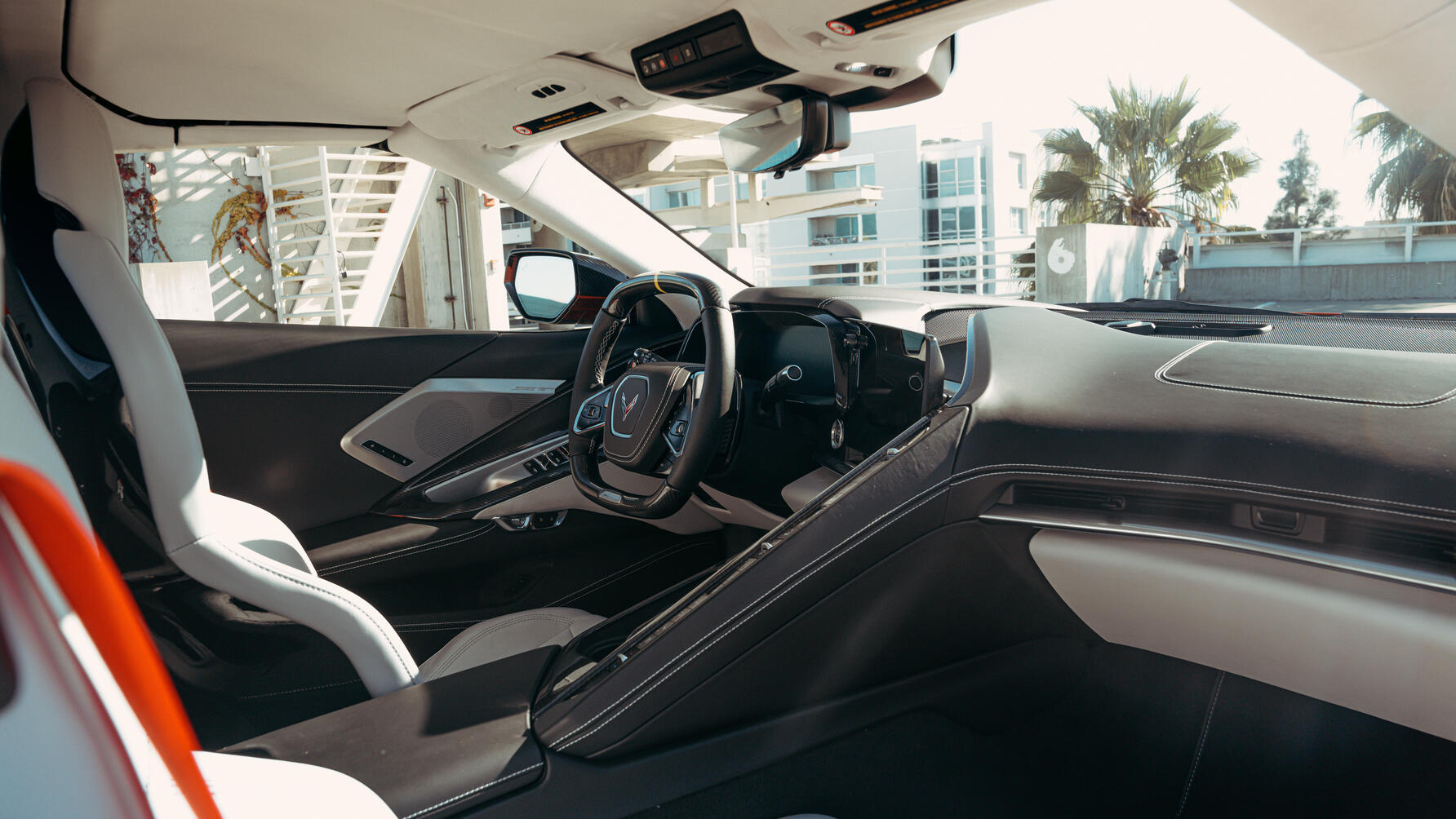 It’s nice inside. God knows what whoever specced this red-on-red one was thinking. But the layout is good, the quality markedly better than I guarantee you’re thinking right now. No stick in the middle mind you. The Z06 might be clinging on to its free-breathing motor, but the only choice is an eight-speed twin clutch.

Does it excite you? That’s the key question. Somewhat against my better judgement it does me. I always want to embrace new technology, but more technology – unless you’re Ferrari, on the evidence of the 296 GTB – means more complication and more distance between driver and thrills. The Z06 promises easy access excitement.

Will it find an audience outside of America? Remember what Ford did with Mustang? It brought it here back in 2016 and for a while it was Europe’s bestselling sports car, ahead of the Audi TT. Let’s hope this finds the global market it deserves. It’s somehow fitting that America, the country that moves to a V8 rumble, is producing something so magnificent as the sun goes down. 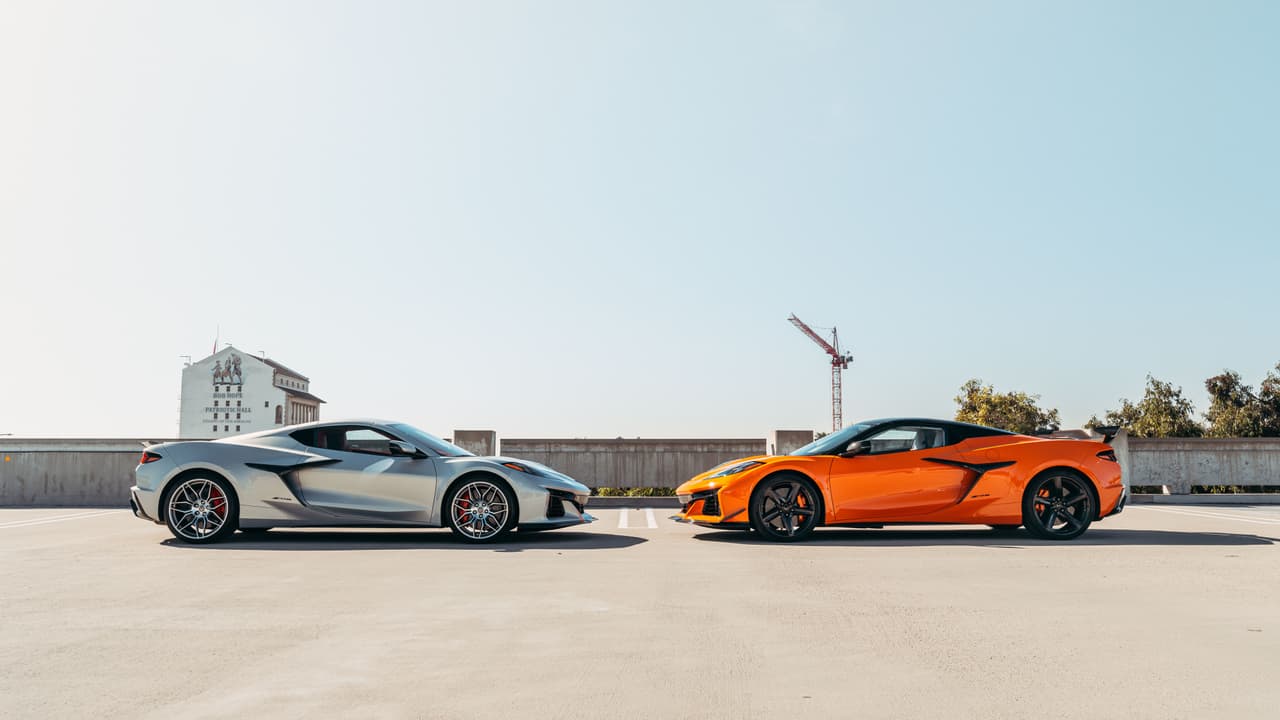