The new Fiesta ST has landed, and it has big shoes to fill. We take it on the ultimate tour of Britain

Primary colours, little pigs, dimensions. Yes, the best things come in threes. This now includes cylinders. Because the brand-new Ford Fiesta ST is powered by a mere three. And this got us thinking. Three countries make up Great Britain, we could sort out three family challenges… and, um, then we ran a bit short. Because as well as city, country and motorway, we wanted to do some track driving. And three writers was logistically one too few. And we couldn’t drive everywhere on three wheels.

But three countries and three challenges in a three-cylinder hot hatch, a car we hope to be worthy of three cheers? Sign us up. Three tanks of fuel? Well, we might break that one, given the route we’ve planned. We want to end up on a beach in Devon, having also visited the Angel of the North, Anglesey circuit, Dagenham and the M25. That’s right, we’re using three cylinders to draw a massive ‘3’ on the UK. Which is why our story starts in Glasgow at throwing out o’clock... 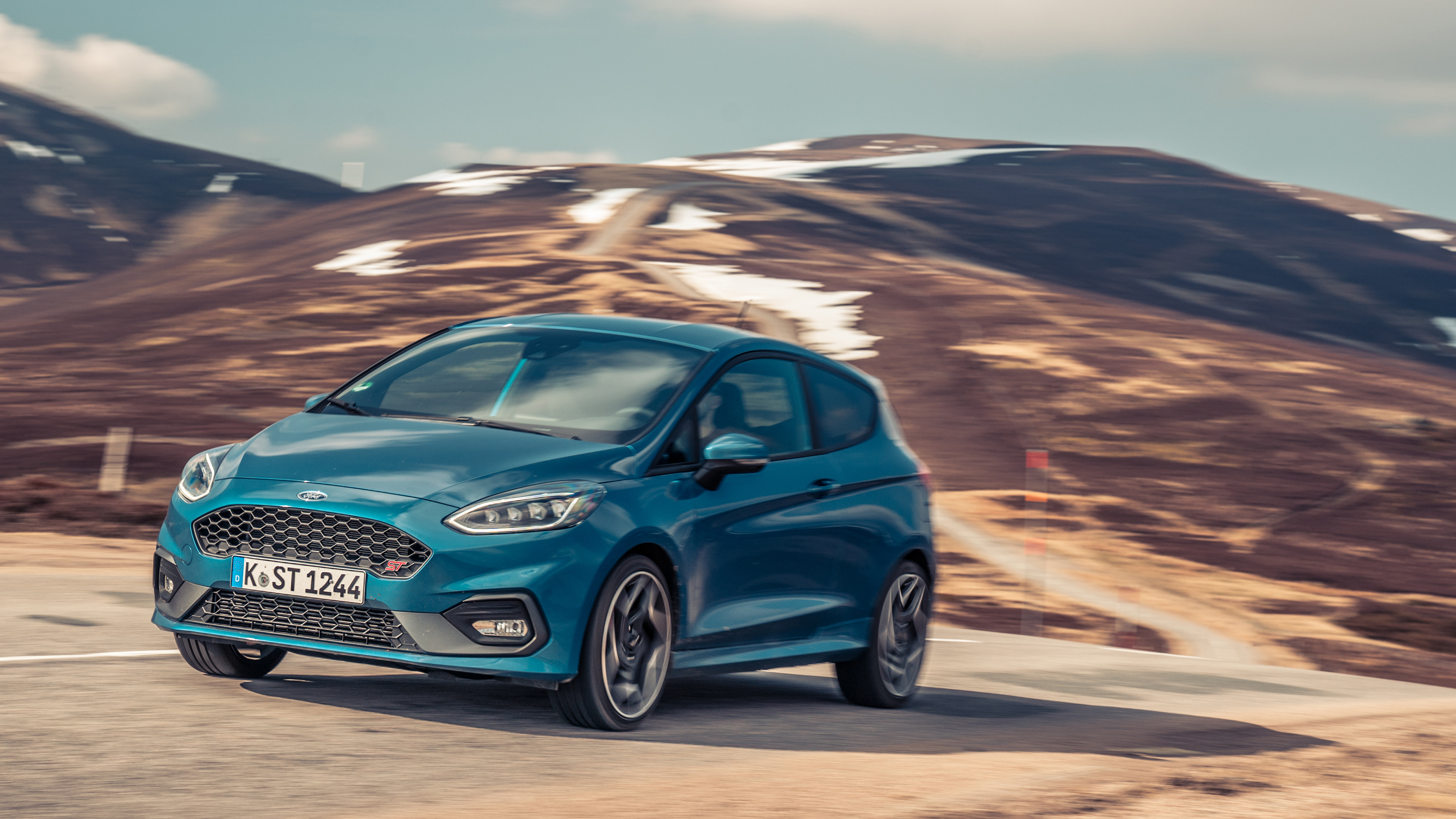 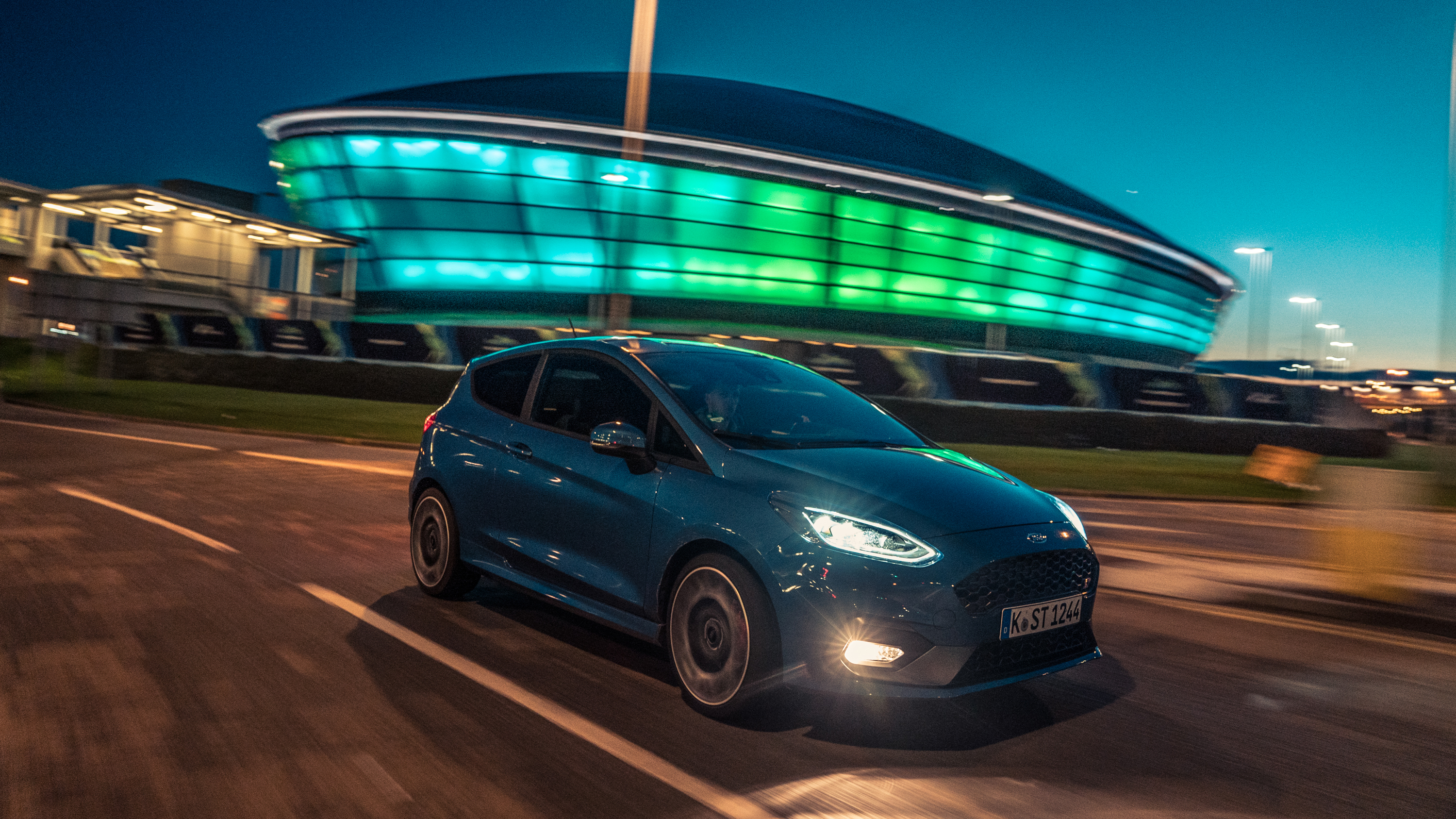 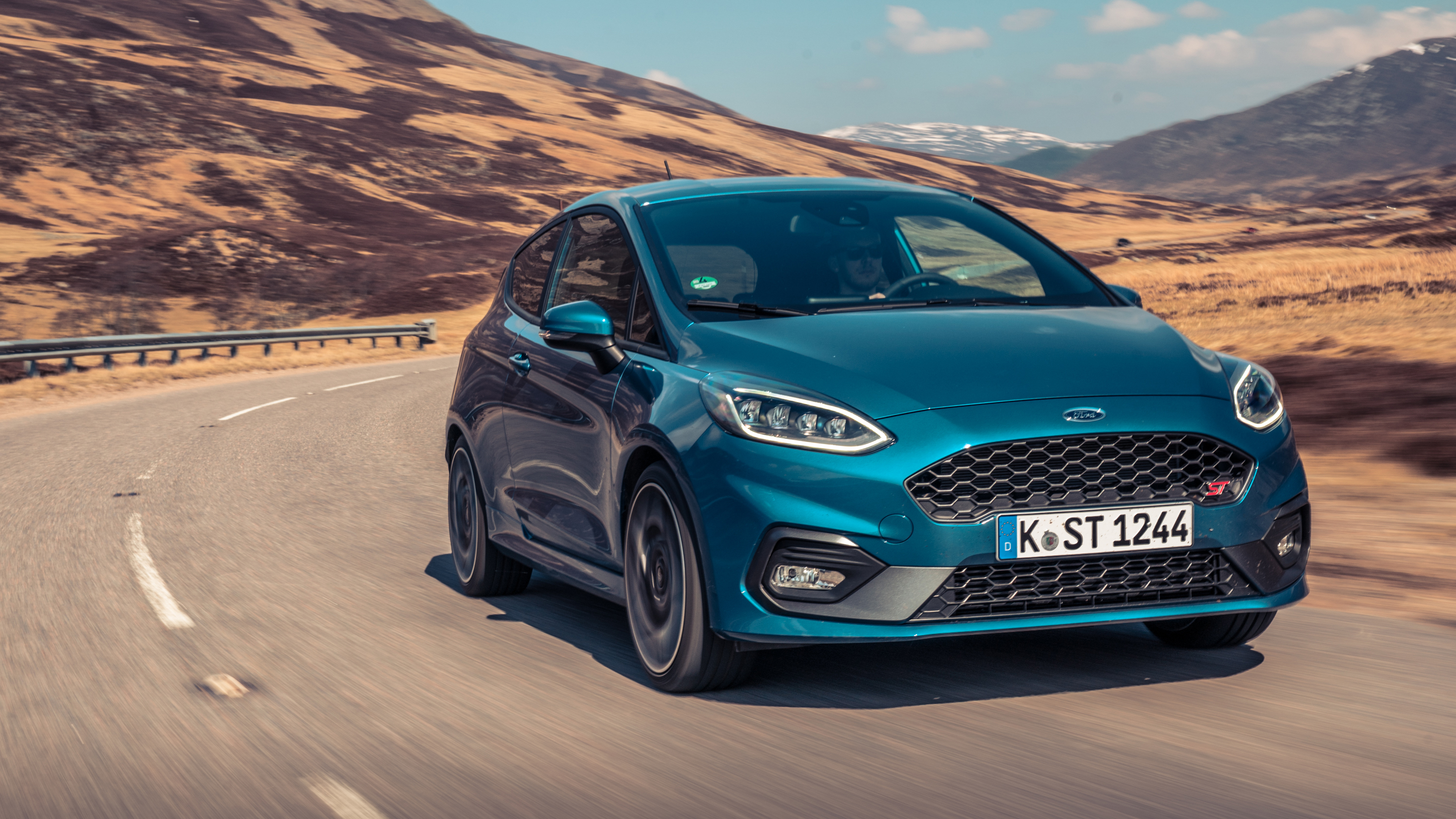 Saturday night fever. Glaswegians are getting stuck in to the peak of the week. Through the green lens of a bottle’s bottom, few revellers notice the left-hand-drive Fiesta pottering up the slopes of St Vincent Street. But petrolheads do. A potent cocktail of hot hatches is marauding through downtown Glasgow. Golf R and Audi RS3 fanatics swarm through the frame as Rowan protrudes from our Civic Type R long-termer, this week’s support car.

They’re interested in the spiky Honda, and alarmed by the lanky human training his camera’s glare from the boot. But they’re mostly stealing glances at the first new Ford Fiesta ST in the country. And they’re wondering: is it any good? You hopefully are too.

There are three (spotting a theme here?) major shifts in thinking for the new fast Fiesta. One is different driving modes (guess how many – go on, guess). Another is grown-up tech, like launch control, torque vectoring and adaptive suspension. The third is that smaller engine. One cylinder and 100cc down, but, in making 197bhp and 214lb ft, it not only matches the old ST’s numbers, but maintains them over a wider power band, with no 20-second overboost caveat.

While you’re swallowing the idea that a true hot hatch can get away with three cylinders and stalemate Top Trumps, chew on the ST’s notion of dropping down to two-pot power when you’re cruising on part-throttle. Below 4,500rpm, cylinder deactivation supposedly buys a six per cent fuel saving on boring roads, so you can treat yourself on the fun bits. There are glorious roads a couple of hours north of here, towards the ski slopes at Glenshee and The Lecht. Beautiful scenery too. We’re brimmed. We’ve got a 410-mile range. Maybe we’ll find the time…

Does it look special enough? I love the Beyblade wheels, and the face is prettier than the old car’s guppy mug, especially the intricate LED headlights, complete with scrolling indicators. But the wing and skirts are subtler than on the last ST, and the colour-coded faux diffuser less obvious. This ST is smarter and more mature – though the tiny door mirrors “look like Will Smith’s ears”, according to Horncastle. 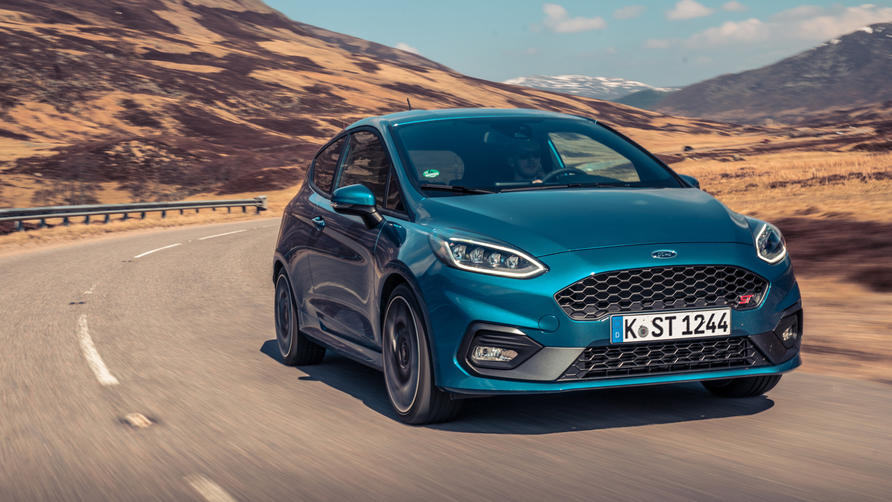 We quit the staccato gridded streets for the fresh, redeveloped banks of the Clyde and spend our sober evening grabbing shots around the cheerily illuminated SSC Arena. It’s quieter here. The Fiesta’s not exactly a teeny car, but it’s useful in town. The steering rack’s quicker now – two turns lock-to-lock, like a Ferrari 812 (aren’t those optional 18-inch alloys a bit Superfast too?) and ultra-quick just off-centre, so it’s handy for dodging into those narrowing gaps in dawdling traffic that add up to the difference between making the green light and getting snagged by the amber.

Since we’re just lapping the docks, I’ve left the Fiesta in its Normal setting. Modes are new to the ST, and follow a similar pattern to the Focus RS’s selections. This is the default, reset every time you prod the starter button. Lightest (but still meaty) steering, the supplest ride (reasonably taut but less jiggly than the old ST) and a long throttle.

Want a bit more of everything? Sport mode stiffens, weightens and quickens. Track mode comes with a ‘not to be used on the road, Sunshine’ warning, and cranks the ST’s parameters up another notch, in addition to loosening the traction control. Careful, now.

The button in question lies in a cluster of three next to the handbrake. I question the logic of putting it right alongside the ESC-off button because we know how this goes, don’t we? You pass the national-limit sign heading for those twisties you crave, drop three gears (no throttle blipper, so heel ’n’ toe on your own), prod the toggle to amp everything up and, “That hedgerow just leapt out of nowhere, Officer”. And just like the Type R shadowing us through the Glaswegian twilight, you can’t tailor comfy dampers with a zesty engine. 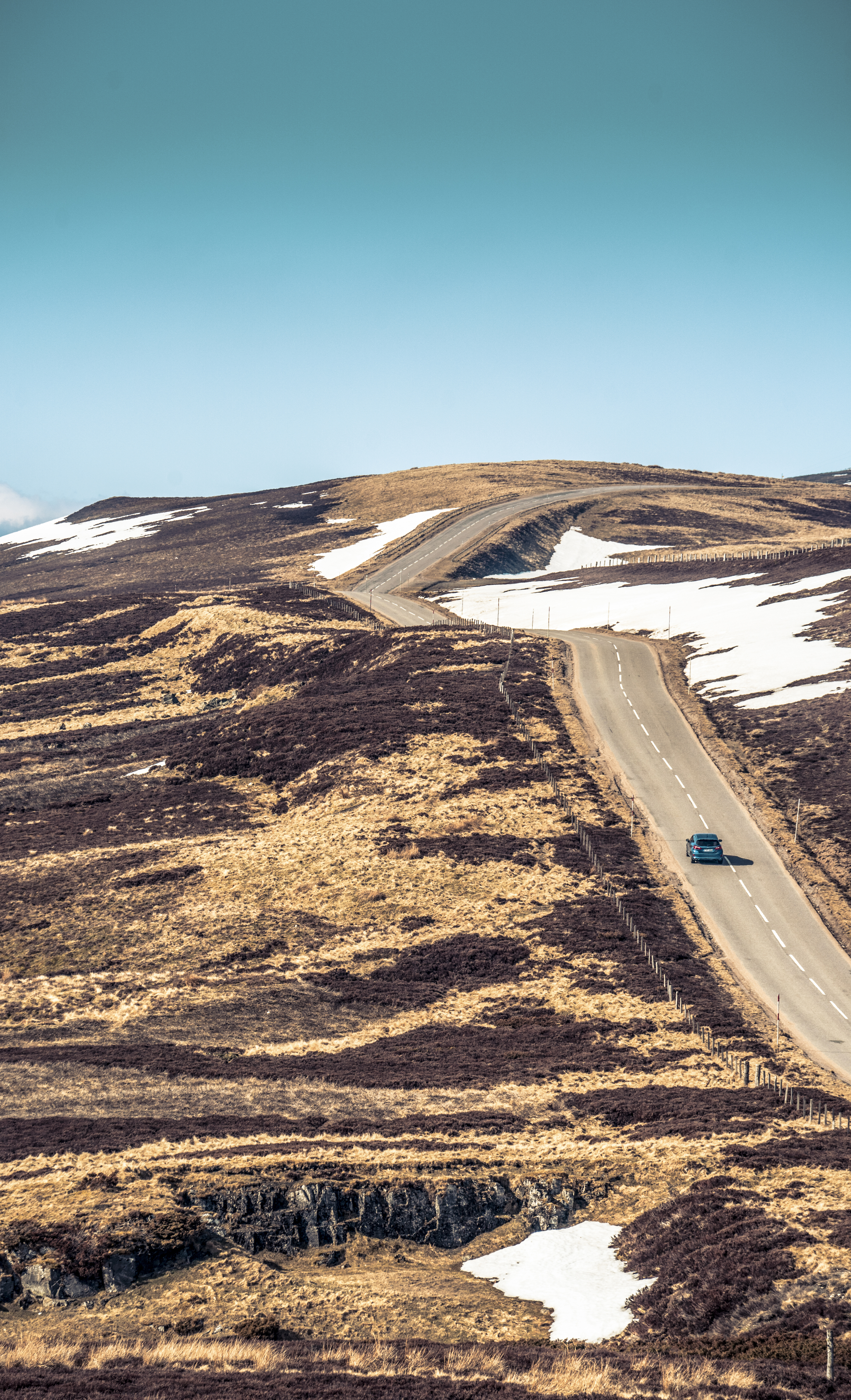 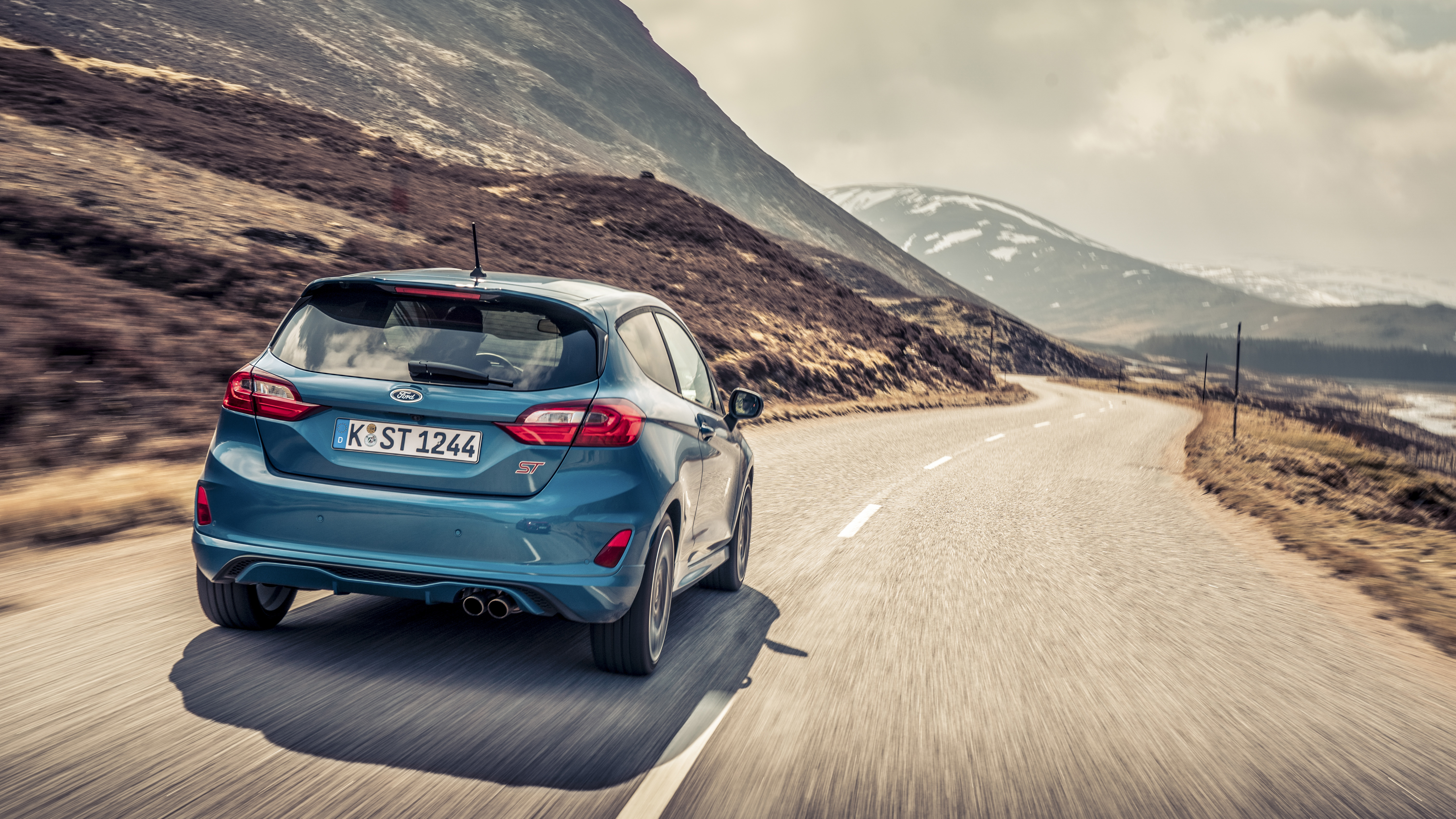 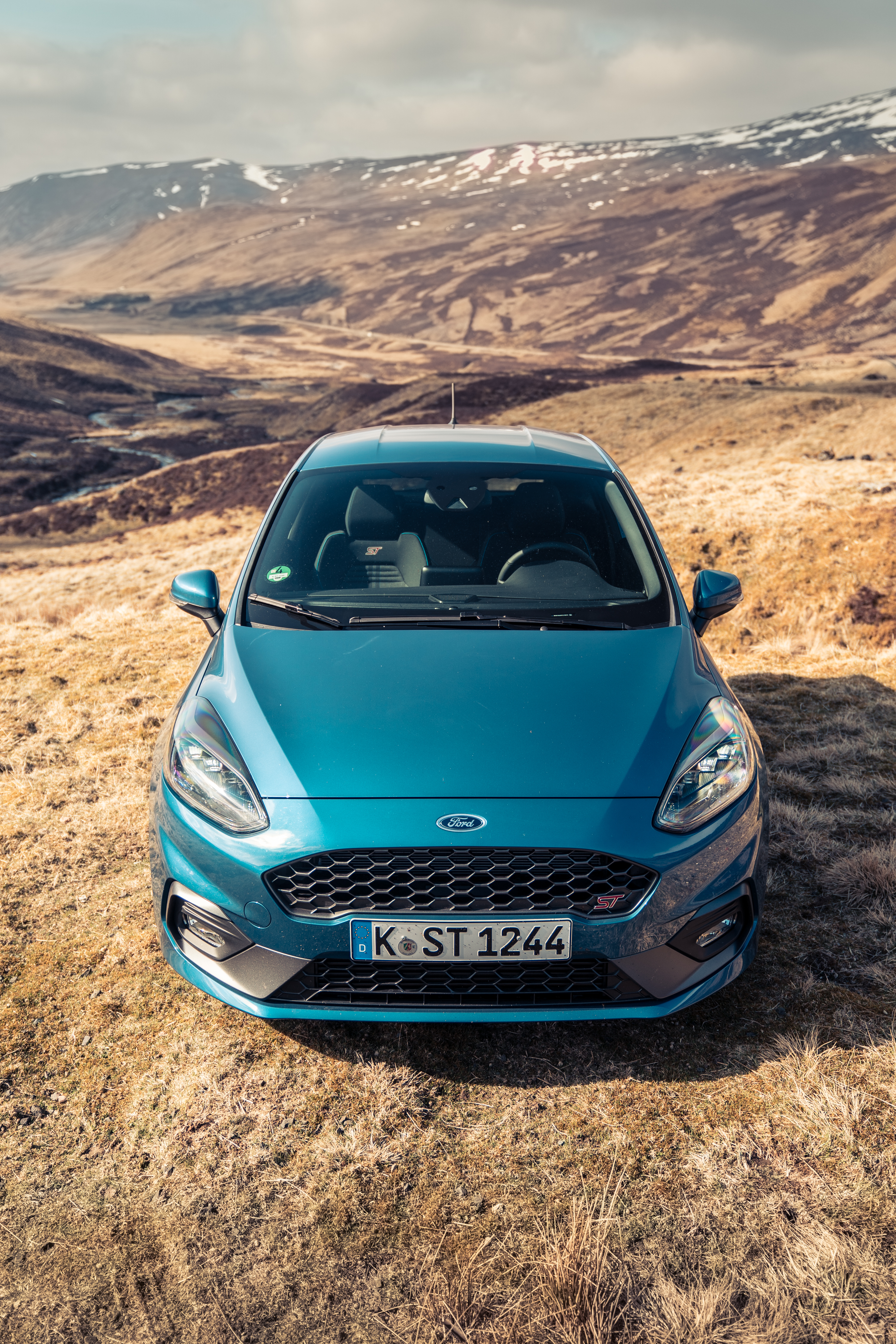 By fighting and kebabs o’clock, Rowan’s approaching satisfied with the shot count and the ST’s fuel needle hasn’t budged from the stop. As an impromptu Glenshee plan is hatched, an armada of ten thousand giddy teenage girls exiting the SSC Arena, swooning from tonight’s Harry Styles gig, shrilly interrupts this happy thought. It quickly becomes obvious that lapping a foreign-registered car while a shifty man with a long lens loiters looks a tad inappropriate. Time to bail. Early to bed, early to rise…

A worthwhile alarm call. The sun’s beating down onto the ST’s signature colour – GT supercar-esque Performance Blue – and we’re rapidly leaving Glaswegians to their hangovers. Beyond Perth, the Old Military Road leads the way, built three centuries ago to help the English army traverse the Cairngorms more efficiently. It’s a superb piece of road that slips the bounds of urban sprawl the further we press north, replacing quaint villages with looming peaks dotted in heather. Chasing the Type R is hard work. It’s being steered with typically icy accuracy by Tømmi Harrisssön and, even at seven-tenths, it’s ballistic. But using his braking points as a guide, I can pick my line in the Fiesta, turn the car into each corner and revel in the inate chassis balance that Ford’s preserved from the old ST.

I’d like the gearshift to be slicker – it’s a shorter, notchier throw than the last ST’s, and the no-lift shift function (keep the throttle pinned while you pull the lever through the gate) just feels wrong, like wanton abuse. But otherwise, the ST is sinking its talons – and bolsters – into me. Even the noise is terrific. It’s augmented by the speakers, but forget that and revel in its blaring, aristocratic tone. With three 500cc cylinders, it sounds deep and reverberant, like a turbocharged BMW M3 trapped in a padded cell. Which is the best place for a turbo M3. 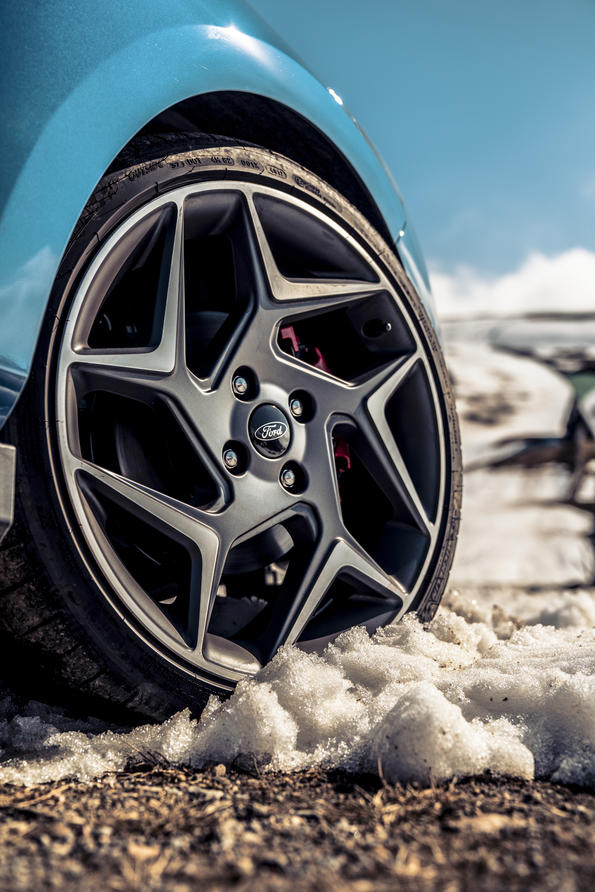 The £850 Performance Pack adds a microscopic shift-up light to the dash, and launch control that pegs the revs at 3,500rpm. LC is a gimmick, you barely notice the shift light, but the pack also adds a mechanical Quaife limited-slip diff. It’s not essential, but it’s an extra dimension. It’s turn-in I enjoy most: you aim for a corner 10mph too quickly, then give it a bung and marvel at how friendly the chassis is. There are more accurate, faster superminis. For grins, I’m not sure the ST can be caught.

I’ve got carried away. The riotous detour has left a gaping chasm in the 45mpg average. Whoops. My bad, couldn’t resist the mid-range surge then poppoppop exhaust drum-roll on lift-off. The three-tank thing ain’t going to fly. Oh well, always better to beg for forgiveness than ask for permission. Sunday mornings were made for drives like this. Or hangovers.

The narcoleptic motor salvages some economy on the looping traipse to the tip of Wales. This takes in the delights of a supermarket breakfast in Berwick-upon-Tweed, and a forlorn nose into the North York Moors. Lovely scenery, but we’re on a tight schedule.

Tom and I dutifully tackle the M62’s diabolical lane discipline and settle into the final cruise. I say settle... the Recaro’s pincers and thick stitching are to blame for a chronic case of numb bum. It’s a literal pain in the arse when the Fiesta’s so refined on the motorway, but by the time we roll into Anglesey’s blustery paddock that evening, only part of the reason it’s difficult to leave the ST behind... 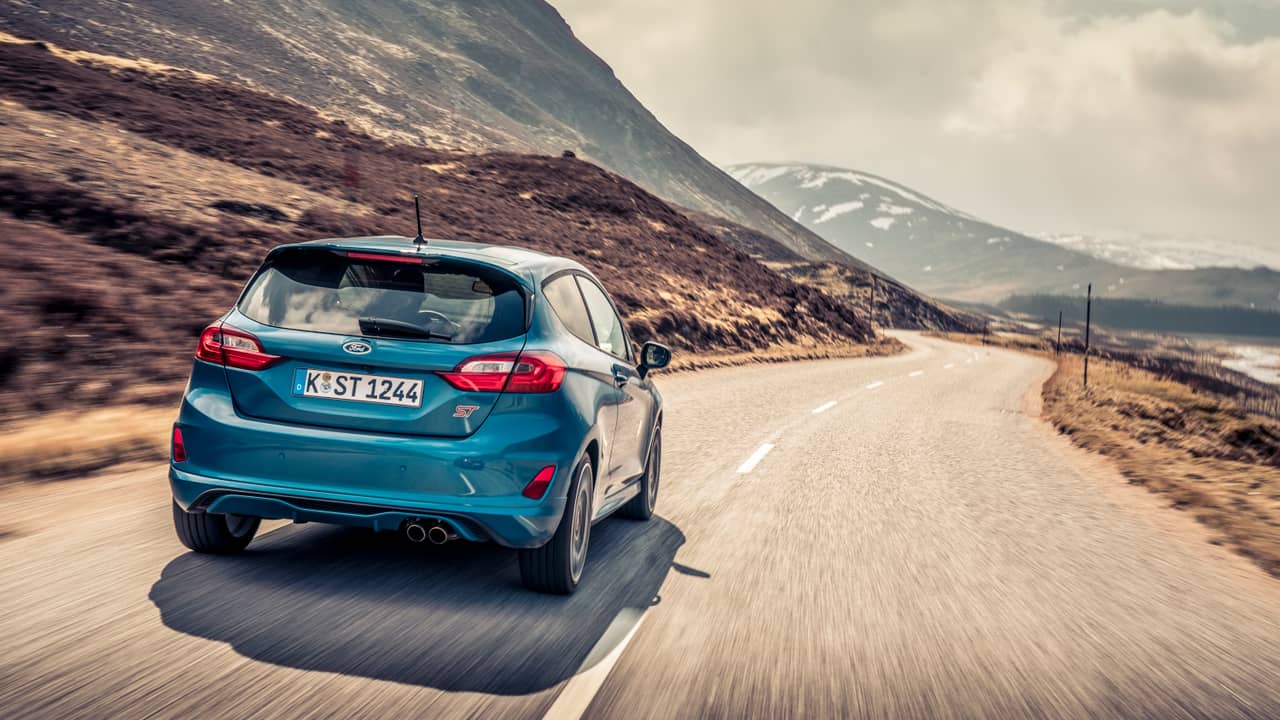