What happens if a children's scooter company reboot a Fifties classic with electric power? Allow TG to answer

PING – another text from the office. Today I’ve been asked why I’m driving a Smeg fridge, how I nicked one of the dodgems from Legoland’s driving school, and what time Noddy wants his car back in Toyland.

Cruel jealousy. Meanwhile, Zurich’s citizens are cooing, giggling and waving at the 2.4-metre-long bubble of nano-consumption dogfighting with trams down Bahnhofstrasse. Fancy a head-turning two-seater with silly doors? You only need 20 horsepower. 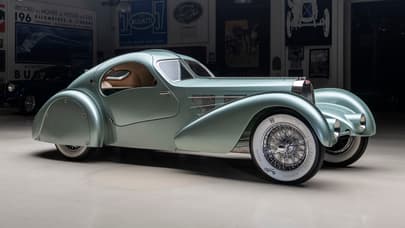 Is this one-off Bugatti the world’s finest ‘replica’?

Introducing the Microlino. Cootchie-coo! It’s an Italian-Swiss electro-dwarf that couldn’t be any more obviously inspired by the Isetta bubble car if it had a ‘My other car is a Beemer’ sticker in the window.

However, BMW’s nothing to do with this venture – the engineering is the work of an Italian company you’ve never heard of. They’re called Tazzari (told you) and have built diminutive electric cars since 2006. And the design, marketing, the genesis of the idea? That’s from Micro Mobility Sytems. And I promise you’re familiar with them – it’s the company that invented the folding micro-scooter. 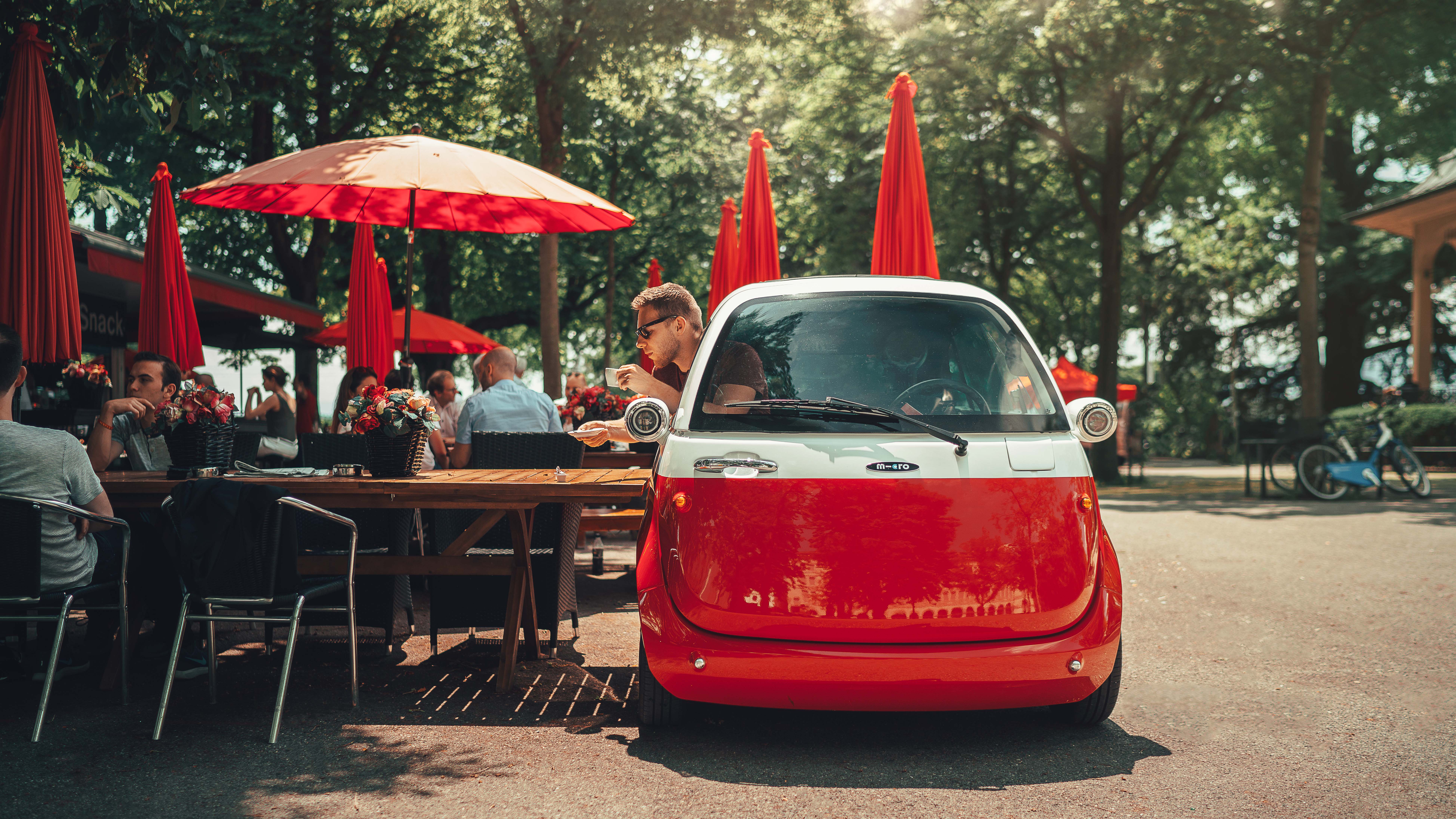 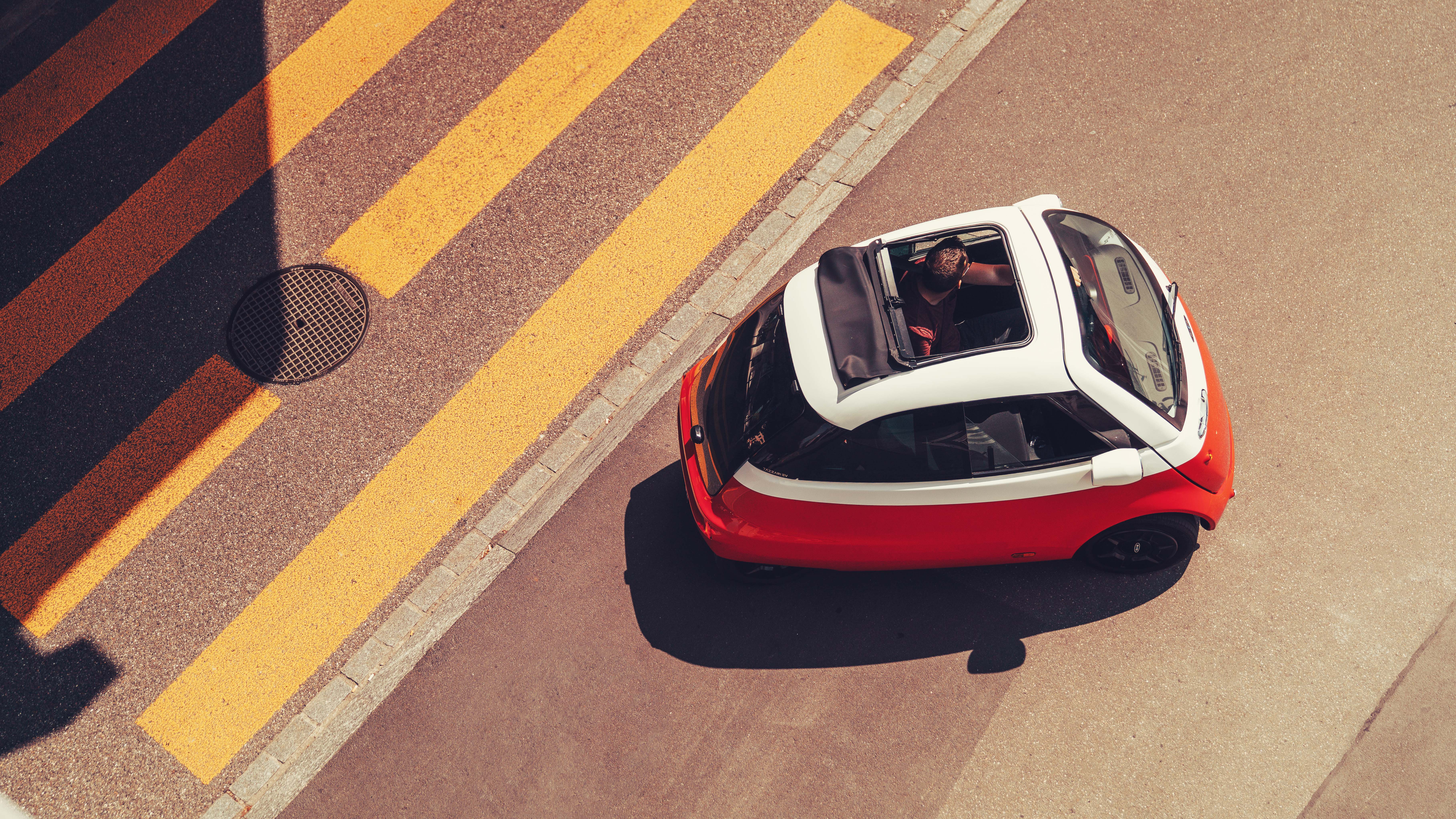 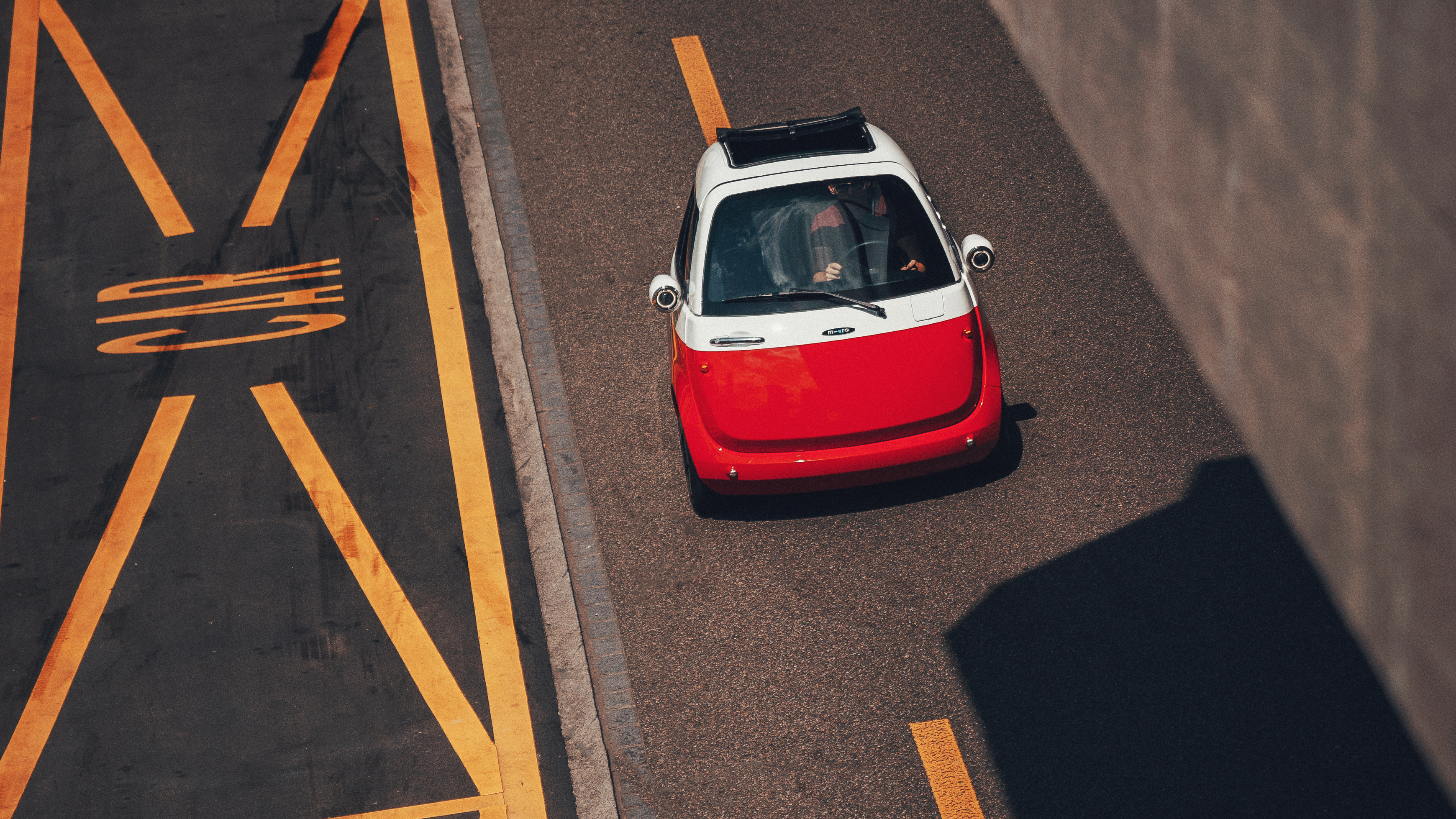 The father of 2000’s Christmas best-seller could’ve scooted off into the sunset with the earnings of his phenomenally popular child/hipster transport, but Wim Ouboter and his sons, Oliver and Merlin, decided instead to get their heads together and apply some Swiss thinking to urban cars.

“There’s a pretty big gap in the market,” Oliver explains, “between bicycles, scooters and a small car.” The Micro boys point out that an average car journey only transports 1.2 people (basically you’re on your own most of the time), and superminis with five seats are flagrantly oversized and overengineered for purpose. “Even a Smart is tested for motorway driving, but when was the last time you saw a Smart on the motorway?” asks Oliver rhetorically. 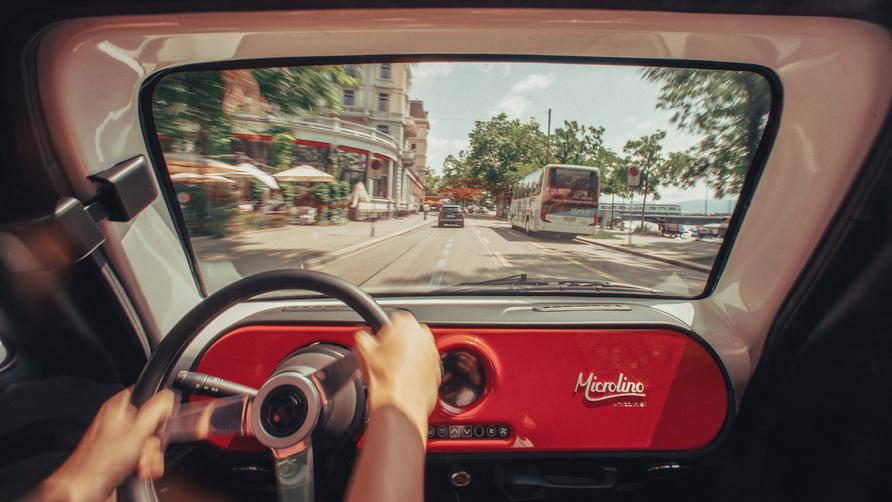 I first clapped eyes on the Microlino at the Geneva motor show in March 2018. Pretty impossible not to fall in love with it immediately, isn’t it? A heart-eyes emoji on wheels. The Ouboter boys reckoned it’d be ready for a test drive in the summer, so here we are, tugging the chrome-handled fridge door and stooping through the front of the car onto its single-section bench seat.

Just like the Isetta, the solitary door hinges from the front-left corner, and drags the whole steering linkage and dashboard out of the cabin every time you climb aboard. We’ve got a 65 per cent charge in the 8kWh battery, which ought to be plenty – maximum range on a full charge is north of 120km, for this small-cell version.

There’ll also be a 14kWh long-range option good for more than 200km, for no reason I can think of. It’s not as if there’s much to absorb precious watts. For instance, the windows are manual sliders – slammed wide open today as Zurich basks in a scorcher. The leather sunroof is poppered and folded back by hand.

There is a blower – a legal requirement for demisting the windscreen in a closed car, which is why a Renault Twizy does without – but there’s no aircon. You get a wiper, some indicators and a cupholder, but no power steering or electric mirrors.

The mirrors are mounted in the rear of the outboard headlight pods, right where you can’t see them. There’s no sat nav, one dim, diddy speedo screen showing battery charge and total miles, and, instead of a radio, Microlino supplies a Bluetooth speaker as an optional extra.

The chap in the 458 Italia couldn’t flap at his change-down paddle quickly enough. I was gone, a strawberry and cream speck

So, it’s sparse, but what else do you need in a city car? You’ll use your smartphone maps for nav anyway, and parking sensors are a frivolous luxury when you could wiggle your toes and feel the bumper of your neighbour’s car through the fibreglass facade. Simplicity is beautiful. The Microlino is gorgeous. Twist the key, prod the Fisher-Price forward or back arrow on the cheery dashboard, and dab the floor-hinged throttle. Away we, uh… oh.

Now, I ought to be plain that Microlino very sportingly gave us a crack in one of two prototypes it has got running. This red example was built in December last year “because sooner or later you’ve got to stop designing and just build a car,” Oliver shrugs. Since then, they’ve identified 250 improvements to make for the production cars the company has already scored 6,300 reservations for. That’s almost two years’ worth of production. Each will cost €12,000 (£10.5k) – with a free scooter in the 300-litre boot.

Some tweaks are fairly obvious – the mirrors are useless, the seat belt garrottes my neck and the throttle mapping’s been finessed on Windows ’95. “This is the world’s first electric car with turbo lag,” according to a grinning Oliver.

Prod the throttle and the Microlino trundles away cautiously, lacking the insta-urge we’re used to in lightweight EVs (the Microlino weighs only 513kg). It whirrs steadily to about 6mph, but if your foot’s still planted, the coding wakes up, smells the urgency and dumps all the torque the rearward 81lb ft motor can summon on the narrow-track twin-wheel axle.

Then it zooms, motor wheeeeing gleefully and skittering the tyres across the tram tracks. Downtown, Zurich’s supercar squad is flummoxed. The chap in the 458 Italia couldn’t flap at his change-down paddle quickly enough. I was gone, a strawberry and cream speck, on my way from 0–30mph in 5.0 seconds.

Apparently it has to be pegged back to a heady top speed of 56mph. Again, what more do you really need in the city? It’ll dice with the scooters, outstrip the Deliveroos, and you’re shielded from rain, fumes and a gobful of flies. You’ll want pearly whites when you’re smiling this broadly. 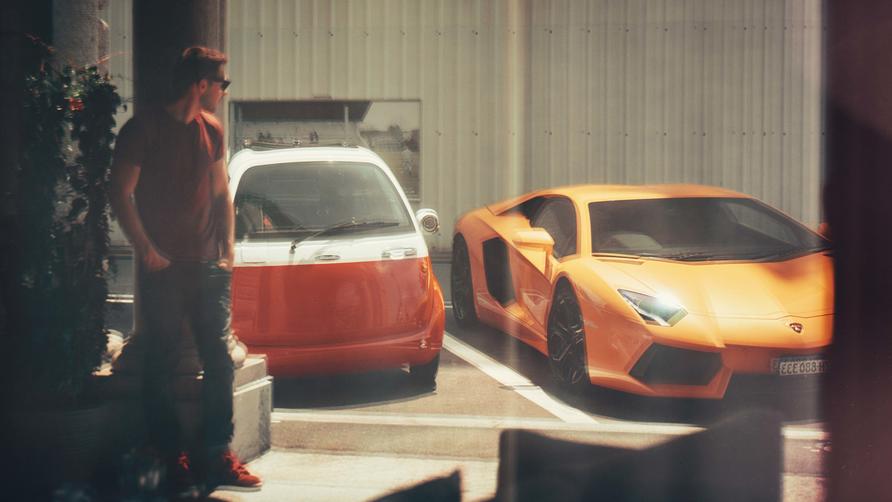 I park my road-legal Poké Ball alongside a giallo Aventador. Four passers-by comment they’d rather have my real-life Little Tikes Cozy Coupe than the fluorescent V12 wedge, because it’s “just less selfish”. Children clamber from pushchairs and toddle over to inspect. Their verdicts are quite literally dribbling with approval.

An audience congregates and asks how fast and how much and how do you fit. Very well, thanks. We gatecrash a nearby modelling shoot and the photographer instantly begs to borrow our car. Top Gear chivalrously obliges. I unload the scooter and discover my bunny-hop skills have rusted badly since I was 11. The polizei dive into the commotion and administrate the taking of selfies. A queue forms to take a seat in the Microlino. It ought to have a revolving front door. Yellow Lambo? What Lambo?

In truth I’m quite glad of the fresh air. It’s roasting inside my plastic cocoon, and managing the car’s super-sharp, heavy-light-heavy steering is a tricky, sweaty exercise. Microlino knows its prototype welded steering arms aren’t the finished article, and it’s working on improved one-piece cast componentry. The suspension geometry and tuning of the rear shock (pinched off a motorbike) needs trimming too.

Other elements are more polished. Unbelievably, they’ve gone to the trouble of incorporating regenerative braking, which works more smoothly than plenty of proper EVs. A full charge takes four hours from a household outlet. Or just use Starbucks’ socket while you wait for your skinny, extra-shot Frappuccino.

Anyway, this is hardly an EV that lingers under a cloud of range anxiety. It’s too cheery for that, and holds its charge magnificently. We’ll cover 30km today and only lose 40 per cent charge, despite that ‘turbo lag’ boost moment becoming dangerously addictive.

Above 35mph it gets a right old weave on as the pinched powered axle chases the wider freewheeling fronts along. Encounter a crosswind – or tram-avoidance swerve – and you might have an upside-down tortoise situation. But this is one heck of a learning curve for a company that’s only built glorified planks on wheels until now.

Why do it at all, though? There’s no ridesharing app or holier-than-thou message plastered over the Microlino. Its creators simply decided that urban commuting could do with being a more nimble, creative affair. And more sociable, too. Not just for enchanted onlookers, but for the occupants. 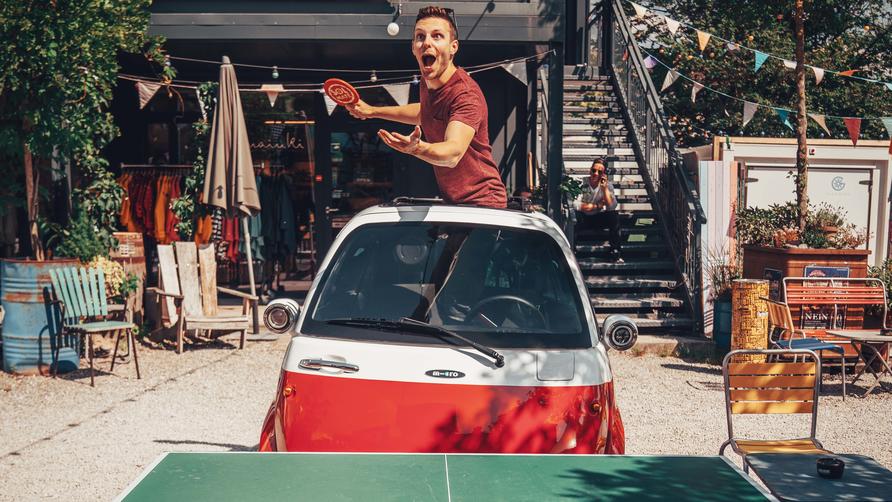 Sharing a bench seat is a delight. It’ll be quilted in the production car. Here, there’s easily space for two six-foot adults in a machine smaller than – and half the weight of – a Smart ForTwo Electric. It’s a stylish dismount too: drive it nose-first at the kerb, push the door skyward on its gas strut and stride out onto the pavement, having taken up barely more space than a Vespa. Don’t forget your scooter.

Of course, the look itself is nothing new – it’s a measure of how the BMW Isetta, designed for affordable urban transport after the devastation of the Second World War, was elegantly, brilliantly realised. And the Microlino is an adorable millennial reimagining. Electric power is quieter, more sociable and nippier. It’s like being in a better packaged, more charming, and, yeah, pretty ungainly Fiat 500.

But whizzing about the rat race in something spreading such unbridled amusement approaches public service. It really does feel like you’re having playtime on a life-size city playmat.

Is that the time? I’d better be getting this back to Toyland. 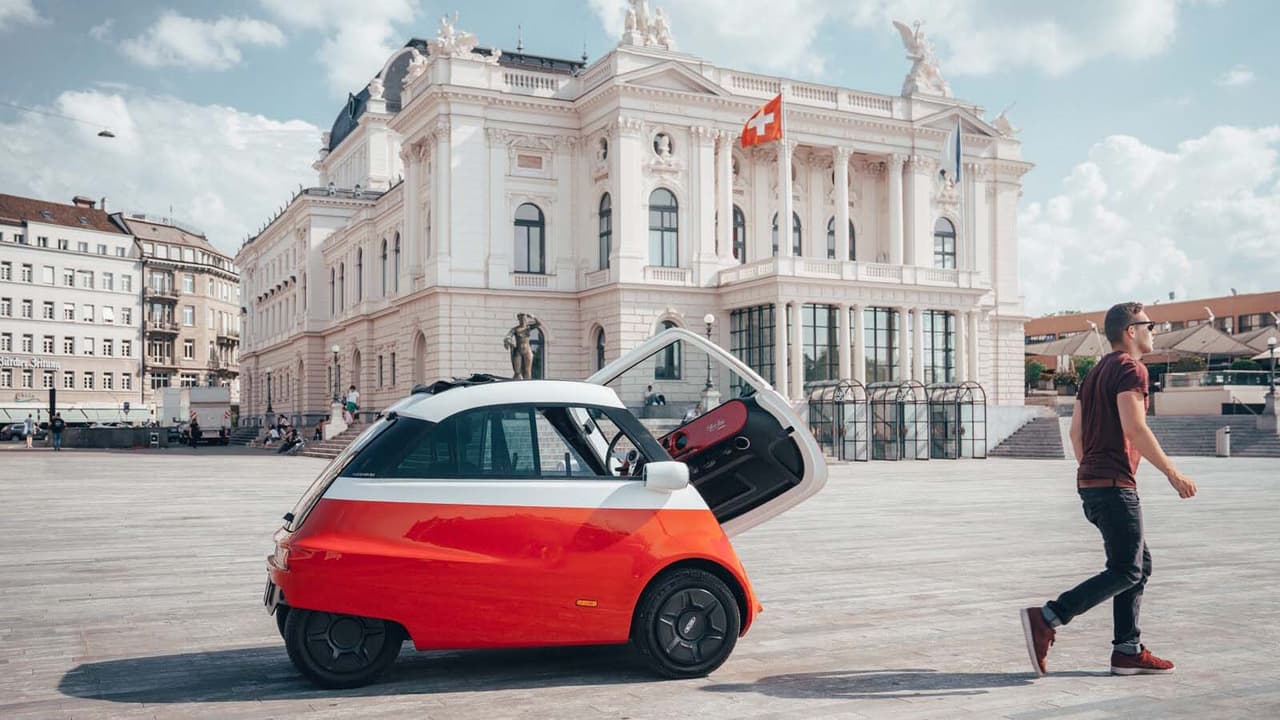