A German tuner has elevated the BMW M135i. Does it make the same impact as VW's lauded AWD Golf?

Elongated paddle shifters. A relatively minor detail in the makeover of both cars you see here, but perhaps the most crucial one when it comes to unpicking quite what they’re all about. You’re looking at almost £100,000 of hot hatchback, all told. And while that buys you an accumulative eight driven wheels, 15 gears and 618 horsepower, both can quickly and easily lull you into just mooching about ensconced in comfort and all-weather grip.

So it’s a good job there’s a pair of very visual and tactile reminders fitted behind the steering wheel of each, sticking up like bookmarks reminding you to delve back into the story. Most obvious (aka gaudy) are those in the AC Schnitzer ACS1, aka a BMW M135i that’s had a minor makeover in Aachen. Their overwrought shape and red script feel a little ‘third-party PlayStation wheel’, but then so do the proper carbon items in BMW’s own M3. And ultimately, that red just screams ‘get involved!’ as it stands proud of an interior that’s otherwise somewhat grey.

Just as angular, but more subtly hued, are the paddles in the Volkswagen Golf R. This is straight out the factory gate with no aftermarket detour, making it a less than direct rival to the ACS1. And yet the R has elevated itself above its plainer Golf GTI relations with at least one tactic similar to the Schnitzer.

Getting these two together proves a number of points. That spending fifty big ‘uns on a hot hatchback south of 400bhp is surprisingly easy. And that BMW’s base M135i is so dowdy beside VW’s AWD hatch benchmark, you need a thorough overhaul at a reputable tuner to draw parity between the two. At least in terms of aesthetic impact or star quality. 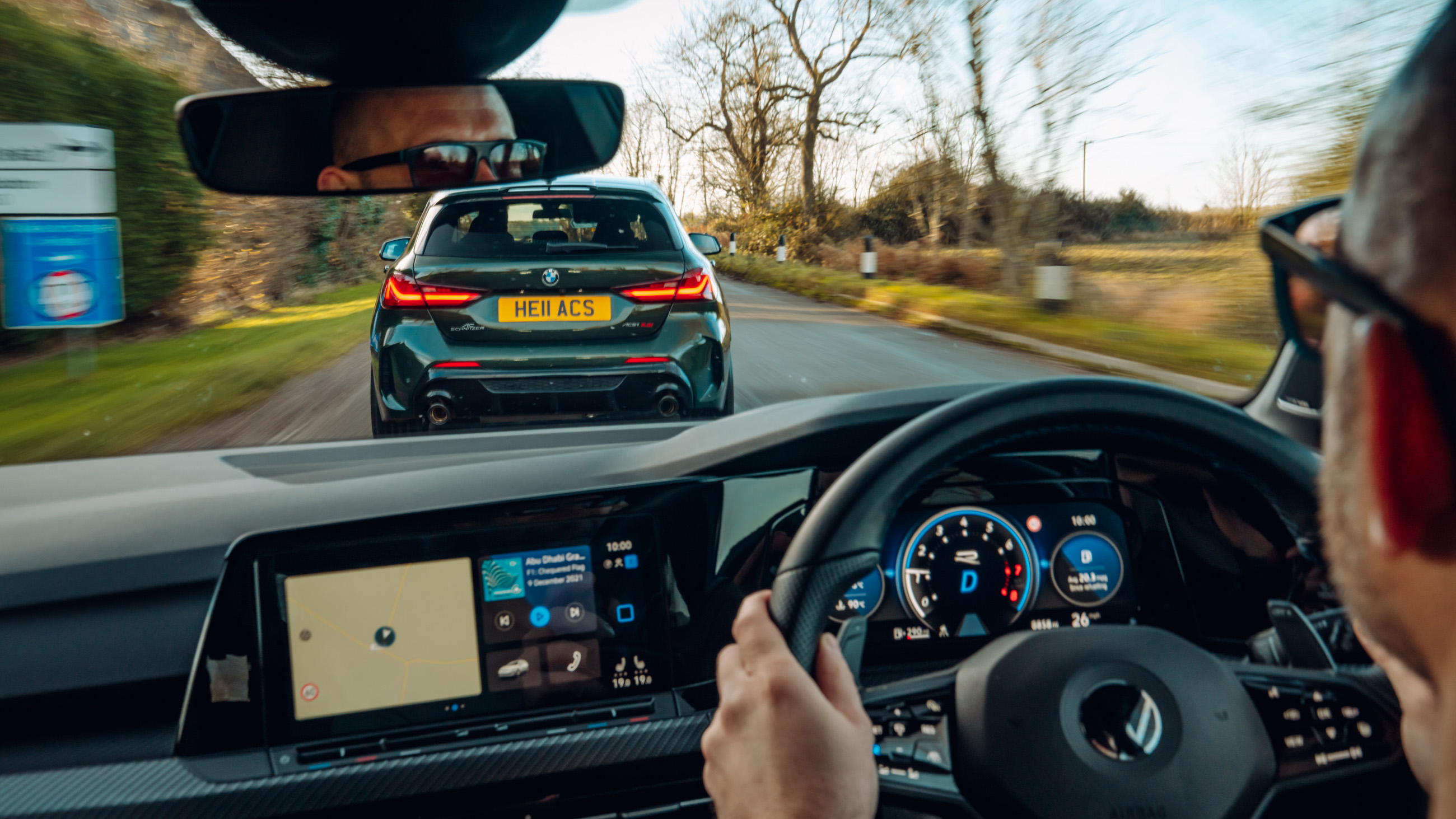 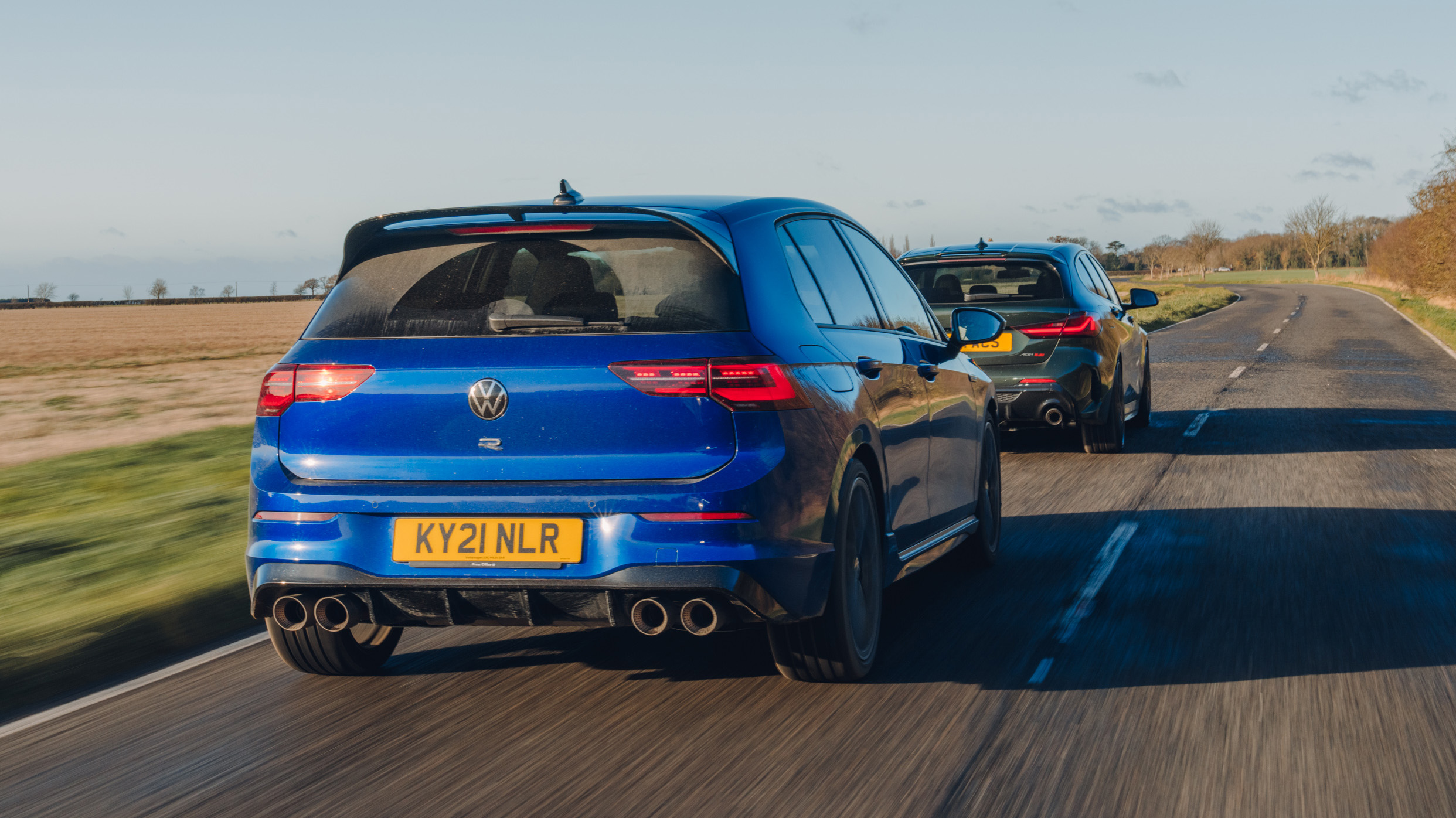 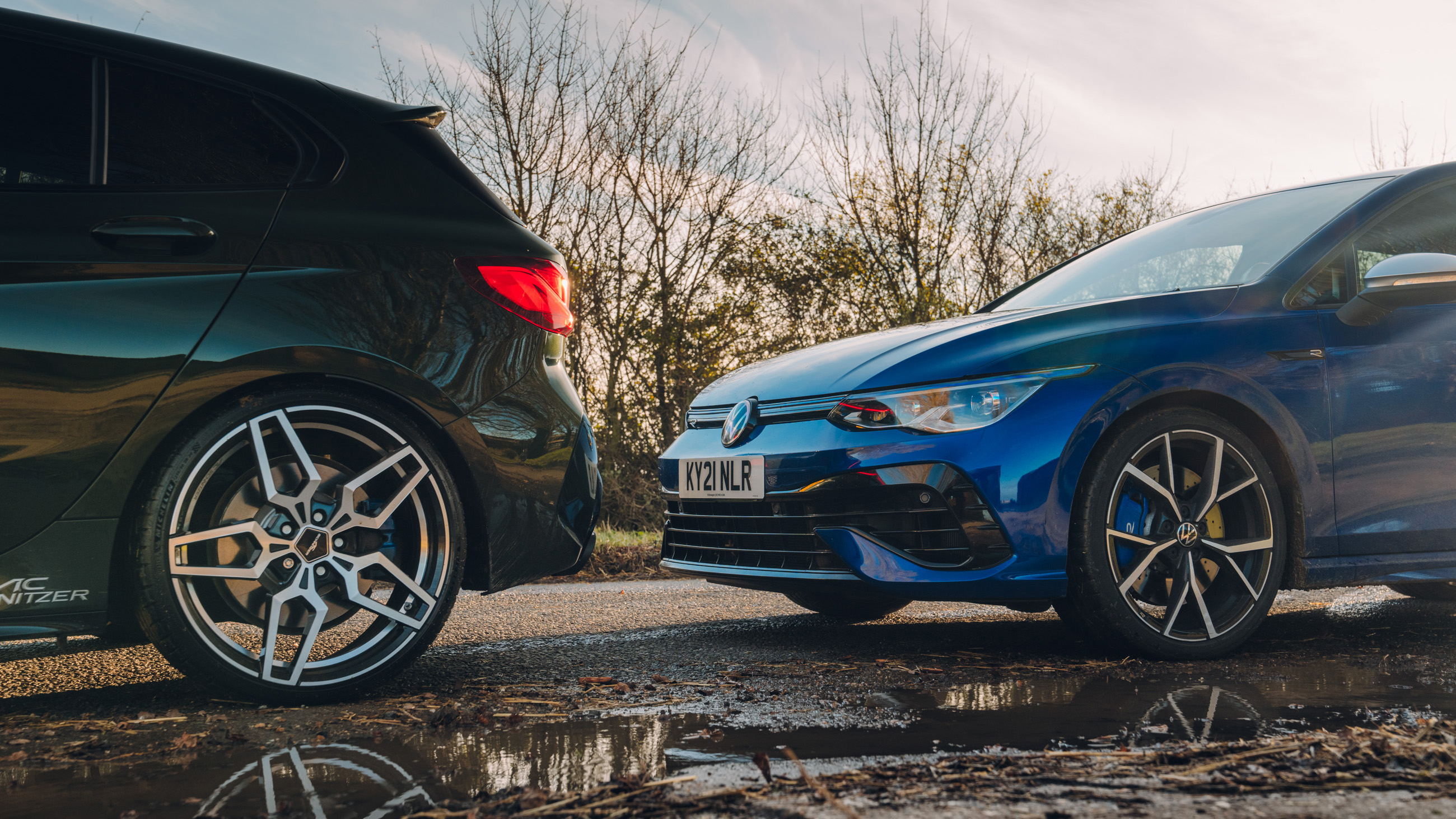 Though quite how much star quality is evident in the Golf R will depend on how much esteem you hold the old Mk7 in. No question, it landed in 2014 as a ginormous leap from all R-badged, all-wheel-driven Golfs before it. There was more interactivity than the contemporary GTI, even, and allied to giveaway lease deals, it quickly became a boundless success.

But once the mist of hype had dissipated, I’m not sure there was a true all-time great left behind. It was way more fun than its forebears, but it still needed a reasonable bit of commitment throwing at it to really loosen its hips and reveal its silly side. The Mk8 – with more power and a cleverer diff – has only doubled down on that. It’s edged the old formula along rather than writing a new one.

Get past the Drift Mode headlines – those systems are beyond unwise on the road, and erratic sliding will get you booted out of any self-respecting trackday – and you have another four-seasons hot hatch that’s so polished it might blind you.

Which isn’t to say it’s not fun. You just need to know how to access said fun. An ‘R’ button on the steering wheel shortcuts you to a dizzying number of performance modes – including Drift and Nürburgring – but what you really need is Individual, where you’ll likely nudge the suspension down to one of the lower of its 15 (yes, 15) electronically adaptive rungs before loosening the ESC via far too many screen prods.

Now you’ll discover the way it throws power to the rear wheels to trim your line into corners then push you out of them with the vigour of a bigger boy elbowing you out the way in a queue at the bar. You’ll never cackle at its mischief and it never negotiates corners like a sausage dog on lino – as the very best 200bhp front-driven hot hatches can – but there’s eminent athleticism. The Golf’s endlessly professional persona is just all too good at making you forget to bother.

There’s no doubting its pace, though – it feels good for its 316bhp peak at the very least, and while it’s frustrating the seven-speed DSG ‘box never allows you full control of upshifts, all that means is there’s an almost EV seamlessness as it accelerates up to the British speed limit. 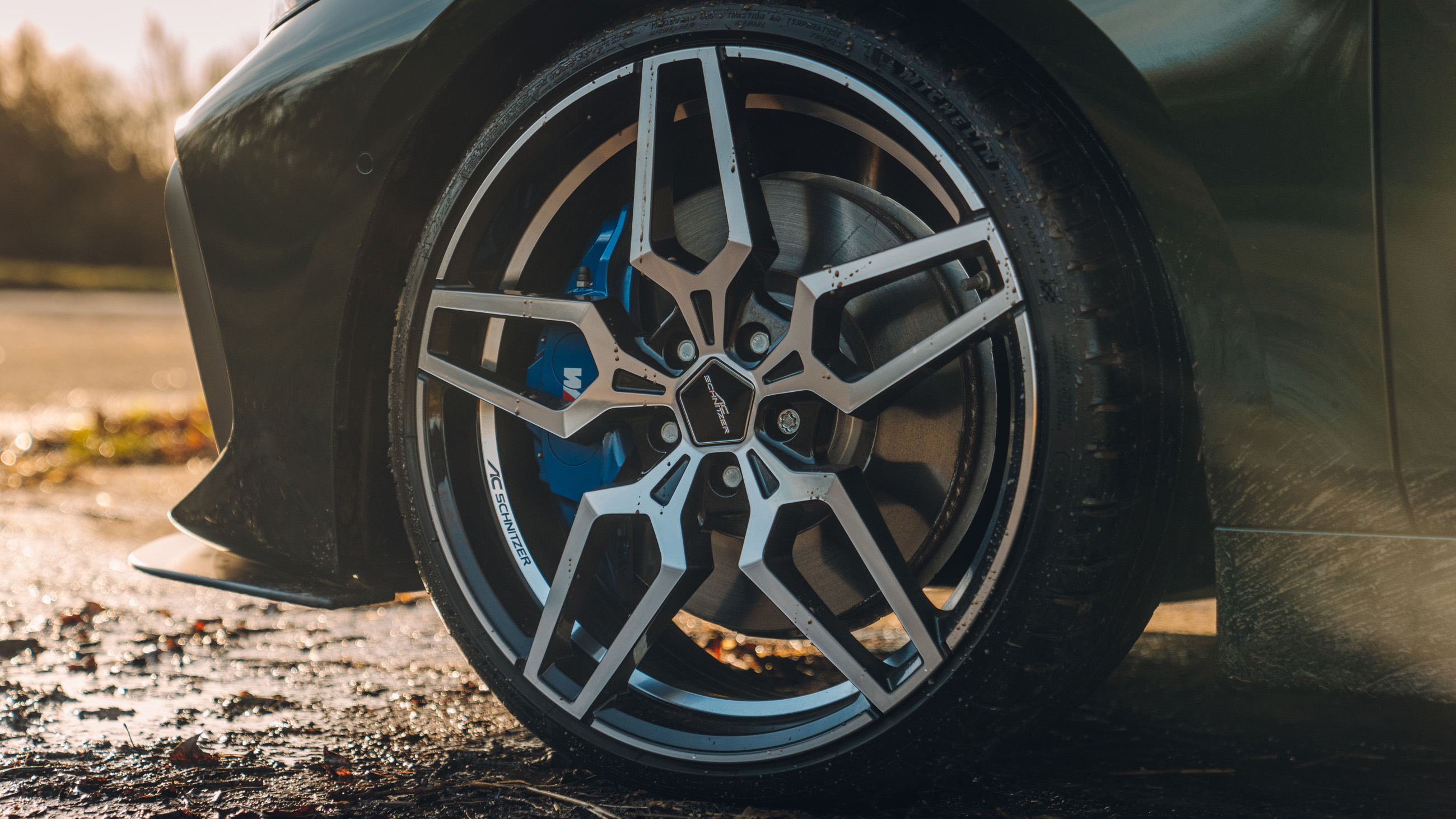 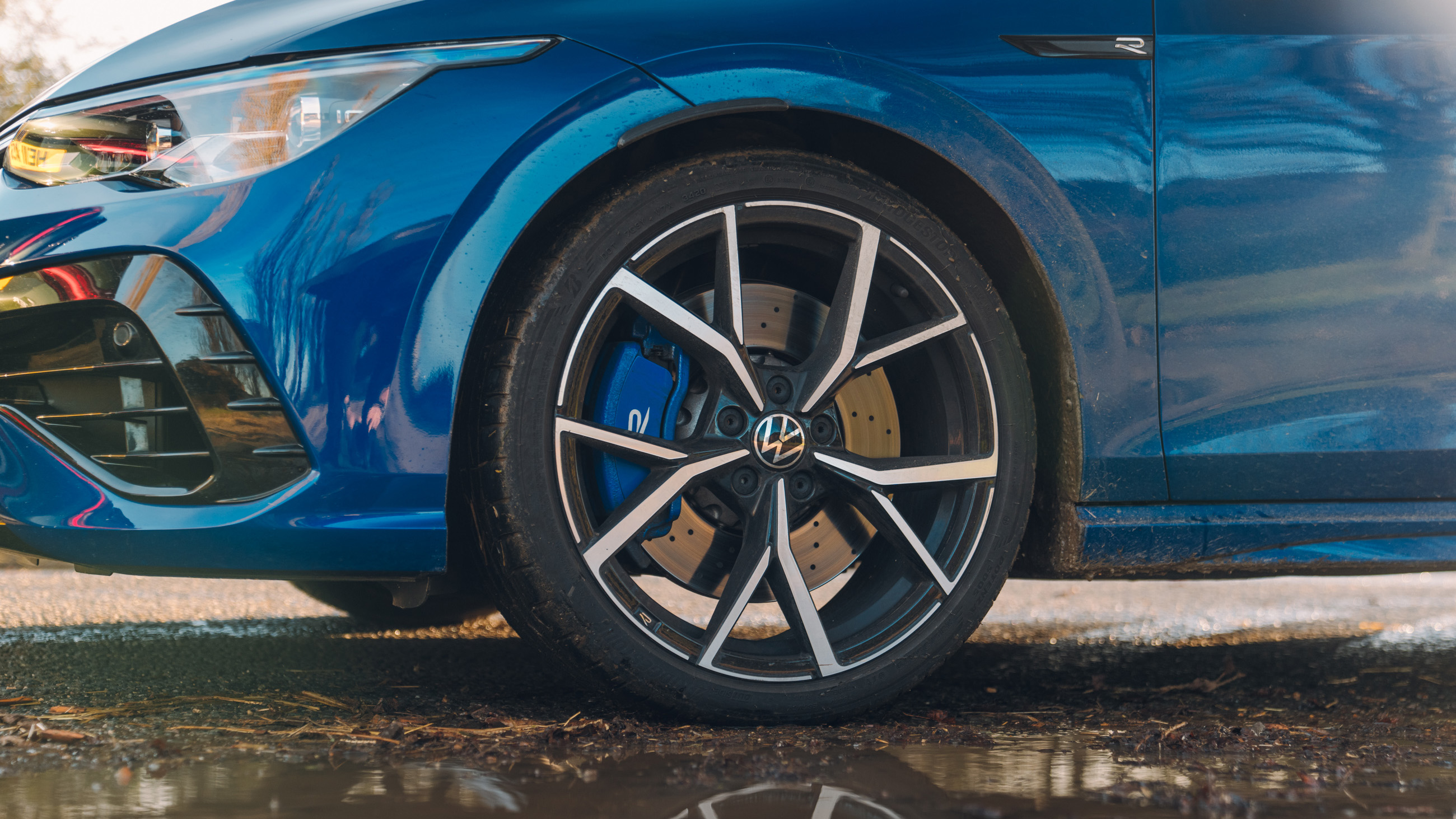 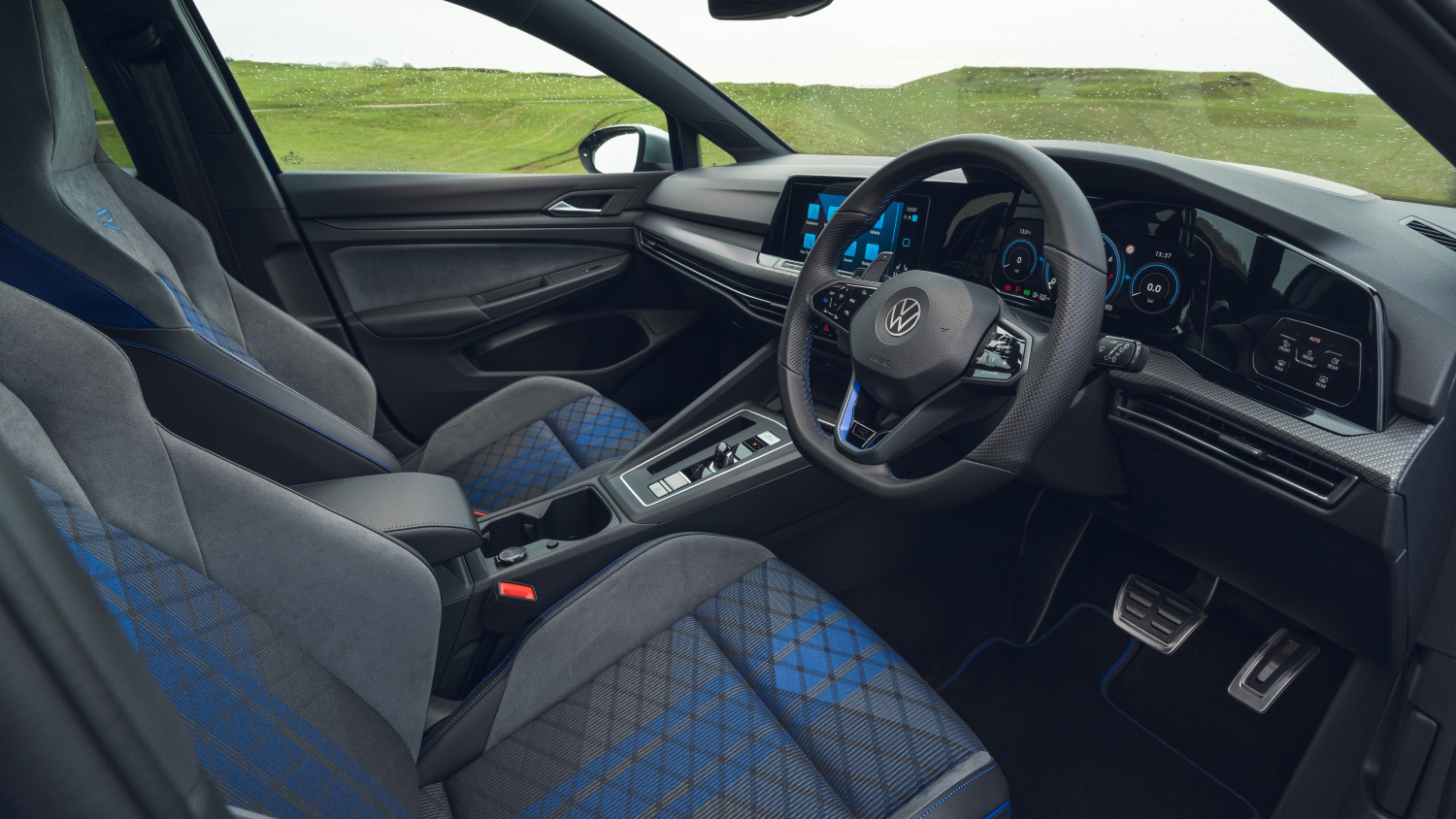 While the BMW – and thus the AC Schnitzer – is also AWD, it’s a more front-biased system that allows a squirm of torque steer on muckier surfaces. Which I’m fine with. But beyond that, the M135i is even straighter-laced than its unmodified German foe. Which I’m less enthused about.

The ACS1 is undoubtedly a step on from its underwhelming base car, though. You’re currently looking at around £11,000 in mods, the end result of dropping your 1 Series off at Schnitzer for a little while and coming back to something both visually and dynamically different. But the crux of why this is a sharper can than BMW’s is thanks to one sole change – a £2,500 coilover suspension kit.

It’s manually adjustable through numerous notches but arrives with the tuner’s recommended settings at each corner. No prizes for guessing at which race circuit those were fine-tuned. Whether that’s less of a gimmick than prodding the Nordschleife map embedded within the Golf’s drive-mode screen is up to you, but the truth it’s an expertly judged balance of sharpness and squishiness, one that makes this car’s 20in alloy wheels less of a rubber-banded style statement on gnarly British back roads than they really ought to be.

While the BMW’s 302bhp peak is down on the VW’s, I think you’ll carry more speed here; it shrugs off bumps with aplomb. There’s no tweaking the suspension from inside the car, anyhow, so you’ll quickly forget about actually flicking between drive modes (even though it’s via actual buttons in here, satisfyingly) and just get on with the business of going quickly without endlessly asking the mode screen ‘what if?’.

What neither the M135i nor ACS1 ever are is ‘flamboyant’, which their old 6cyl, RWD namesake really could be. Especially on wintry roads. There’s no extrovert character to unlock and what Schnitzer’s done is sharpen the details of a car that’ll always stop short of really amazing you. But with more bespoke styling details – inside and out – it ought to successfully cheer up the everyday driving which so clearly dominates its comfort zone.

Mind, I’ve spent most of my time in the Mk8 Golf R waiting for a moment of magic that’s never quite come. Its talents are more broadly and smoothly spread than that. The VW is the classier and more accomplished car here, no question, but it’s also the one I drove most sensibly, even if its rear axle is actually keener to get involved. A Schnitzered M135i just brings a bit more intent and intrigue with it, the red of those paddles trying desperately to goad you into doing something other than wrap yourself up in the effortless pace this subsect of hot hatch has made its party piece. 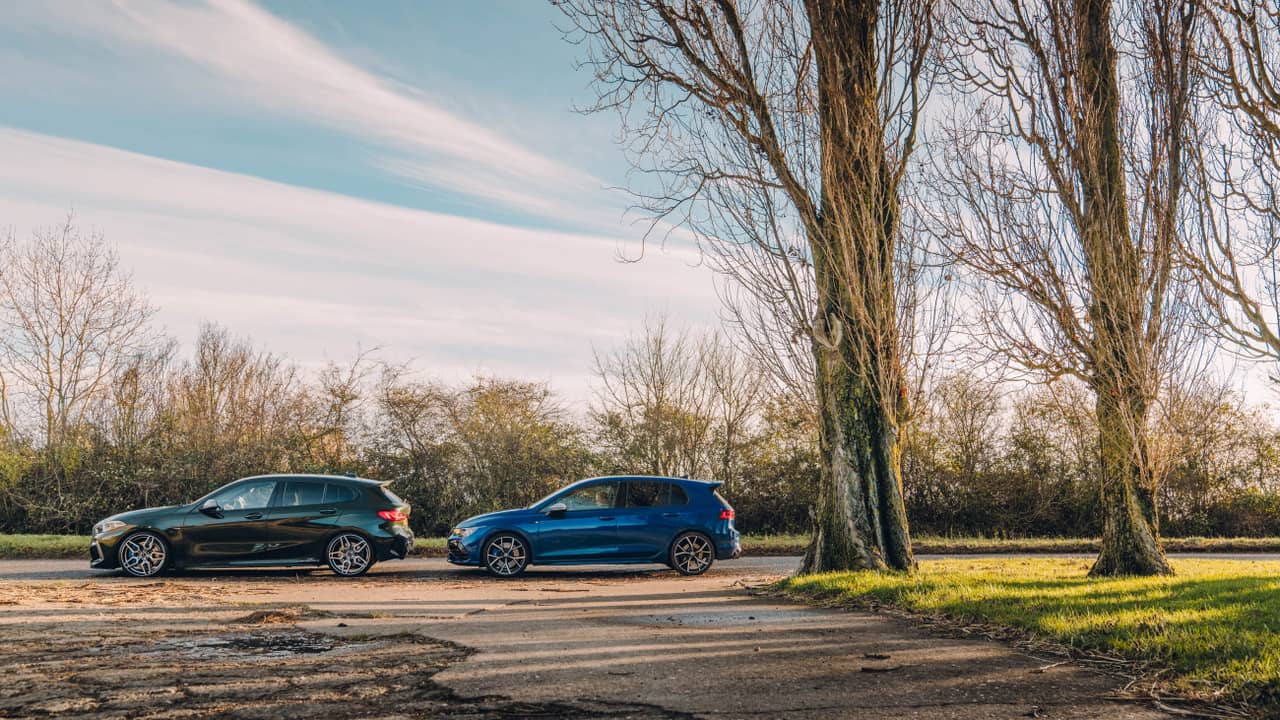