Could we break the range of the new Q4 e-tron or would the electric SUV break us?

It’s around hour eight of this odyssey for the ages that I hit the wall. Not literally, because that would have been a disaster. I feel broken. I’ve been driving for so long my neck and shoulders have fused into an amorphous mass of tendon and gristle, I’ve started moving like Michael Keaton in Batman. It happens again at hour 12. That’s when I consider Thelma and Louising the Audi Q4 e-tron off the side of Coventry ring road into the abstract grey mess that is the former sports centre, just to end the boredom. Still two hours to go.

You might be wondering how I got into this mess, but actually it’s all my own fault. I thought it was funny when someone else was going to do it – if the ex-Forces heroes at Mission Motorsport can hypermile a Renault Zoe, why can’t TopGear do it? Not in a Zoe, obviously, we’d need something fancier. No track, either. Why not the Coventry ring road? And so here I am in a new Audi Q4 e-tron in the heart of pound shop Detroit, Britain’s motor city. I’ve got a soft spot for the rolling concrete landscape of Coventry, I grew up here. Nothing like a bit of local knowledge.

Except everything is different. Piazzas everywhere, shared spaces and oppressive Soviet-style student tower blocks that have sprung up like weeds. There’s one metres away from the railing as the ring road’s grey overpass sweeps round the eastern edge of the city centre. Four or five laps in I manage a wave to a pleasant young man cooking his lunch. What a friendly place. 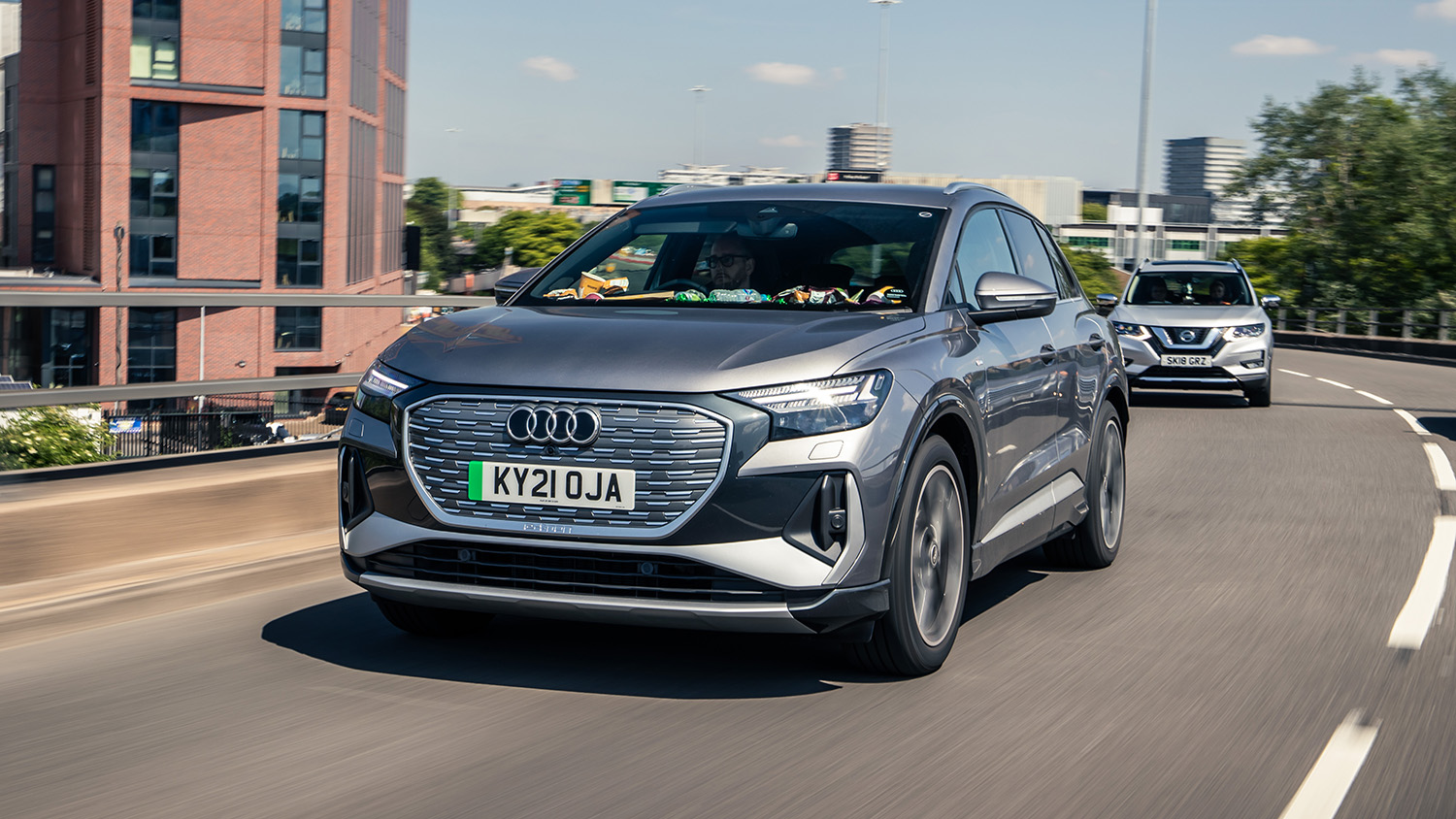 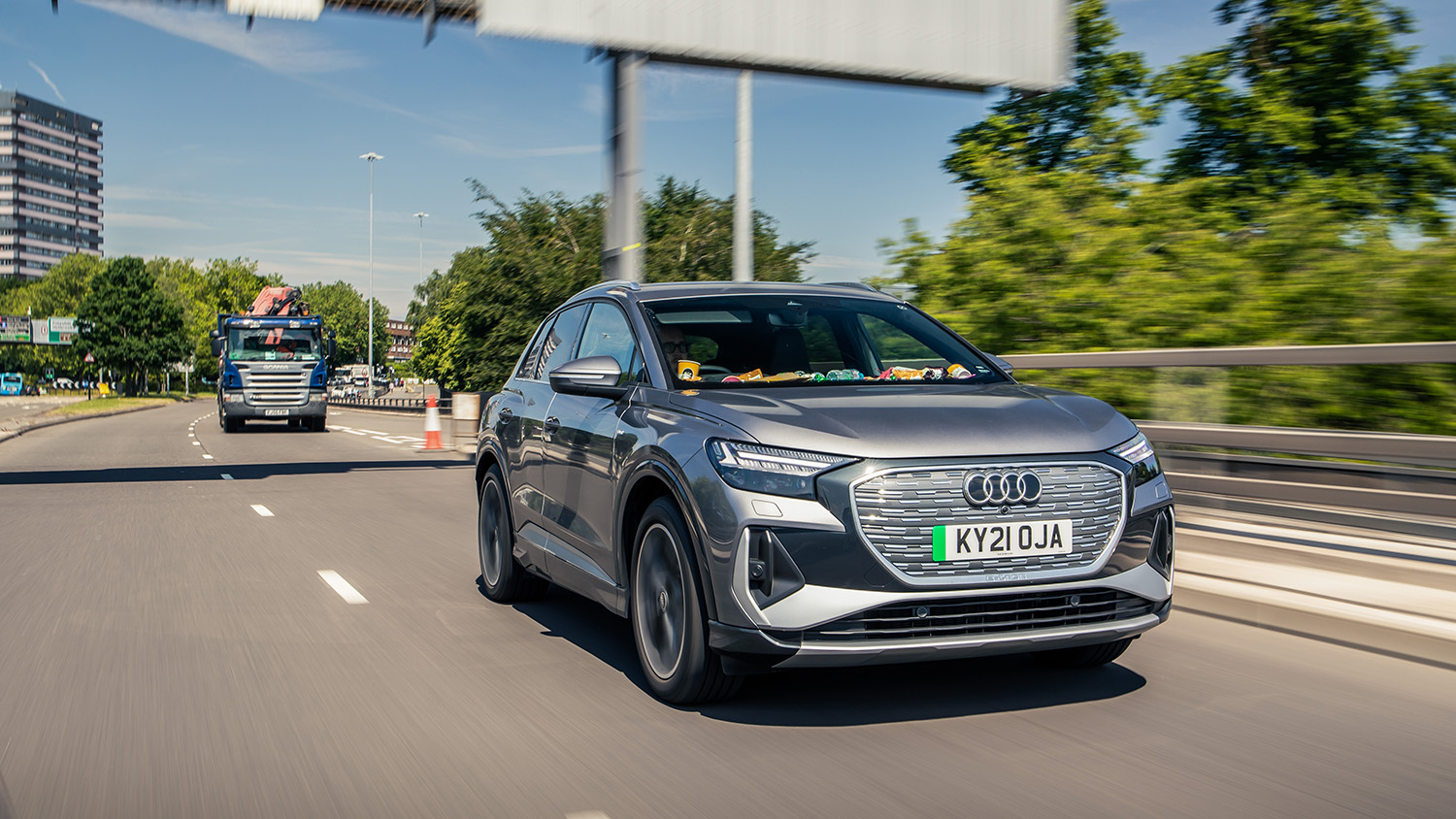 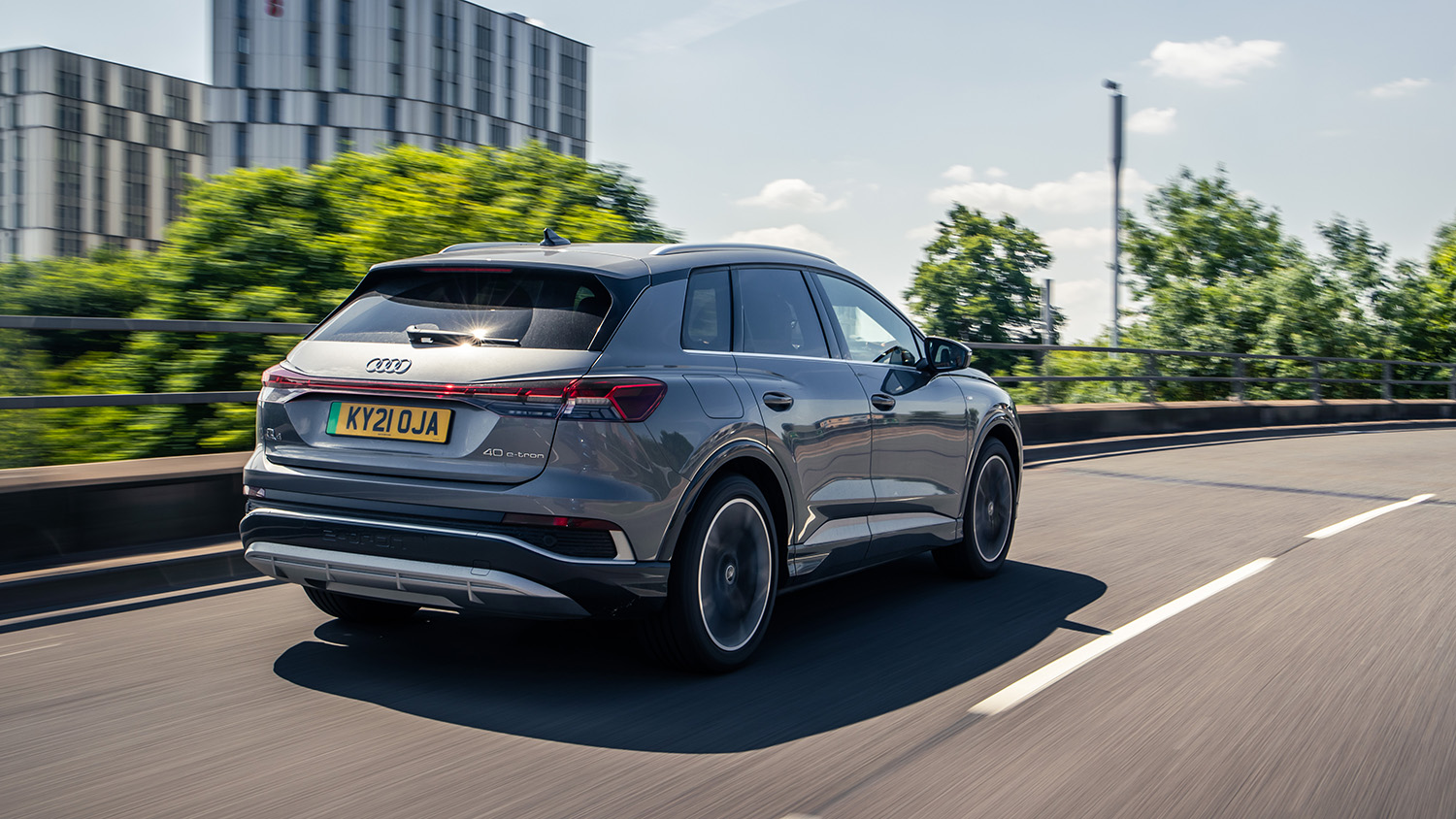 The new Q4 e-tron is an interesting tool for this challenge. Interesting because it’s actually a little boring, as electric cars go. Sure, it’s a lovely Audi, with the requisite swanky interior and reassuring solidity. It’s spacious – room for five and lots of luggage if you’re feeling cavalier about your electricity consumption. But the Q4 e-tron doesn’t make a fuss about its powertrain, just quietly gets on with it. Literally. There’s barely a squeak from the suspension or the windscreen wipers. There’s a brief rattle on the passenger side around four hours in, but it turns out the 12-pack of crisps I brought along for snacks has fallen against the door.

There are three zones for climate control and that, but I can’t use any of them because they’re disastrously thirsty. My cans of cloudy lemonade have warmed to an unsavoury extent. I’m a bit spoiled, as drivers go – I assumed the Audi had adaptive cruise, but I nearly crashed into a lorry at 5am on the way up here. No lane-centring either, not that it would be able to cope with this undulating circuit. I’m happy to do this thing manually, but it would’ve helped with eating the crisps. I get to thinking about this mid-range S line car’s £47k list price, about £2k over the Sport model, but adds bigger wheels, sport suspension and some extra LED ambient lighting, which I’ve turned off because I’m saving every last electron here. Not sure I’d want to pay the extra. I’m all here for the 77kWh battery, though. Those 312 miles of WLTP range are like Prozac for range anxiety, you’d just charge this car every now and then and forget about it. Not me, though. I’m going for a lot more than that.

Coventry’s ring road is 2.25 miles long, with nine junctions wham bam one after another. Technically its pedigree name is the A4053 and it’s the busiest road in the city, with around 60,000 vehicles using it every day. Although I’m not quite sure how they’re counted – in reality it could be as few as 400 vehicles if they’re all doing similar hypermiling runs to me. Construction started in 1959, the first stretch was completed in 1962 and the whole thing completed in September 1974. The ring road had been years in the planning, starting off as a sedate series of roundabouts and finishing up as the brutalist rollercoaster ride we know today, roughly following the line of the wall around what was said to be a beautiful medieval city. 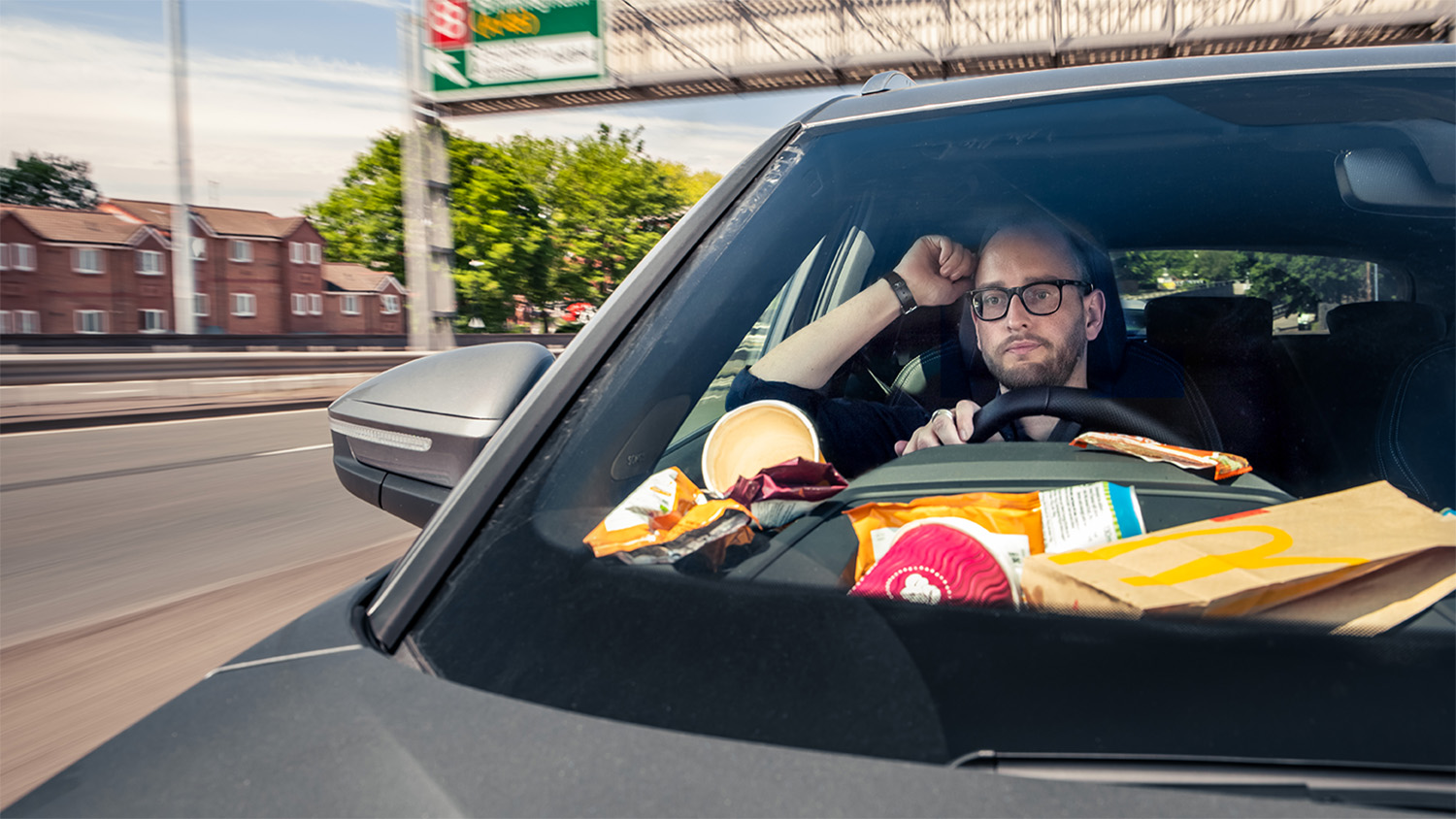 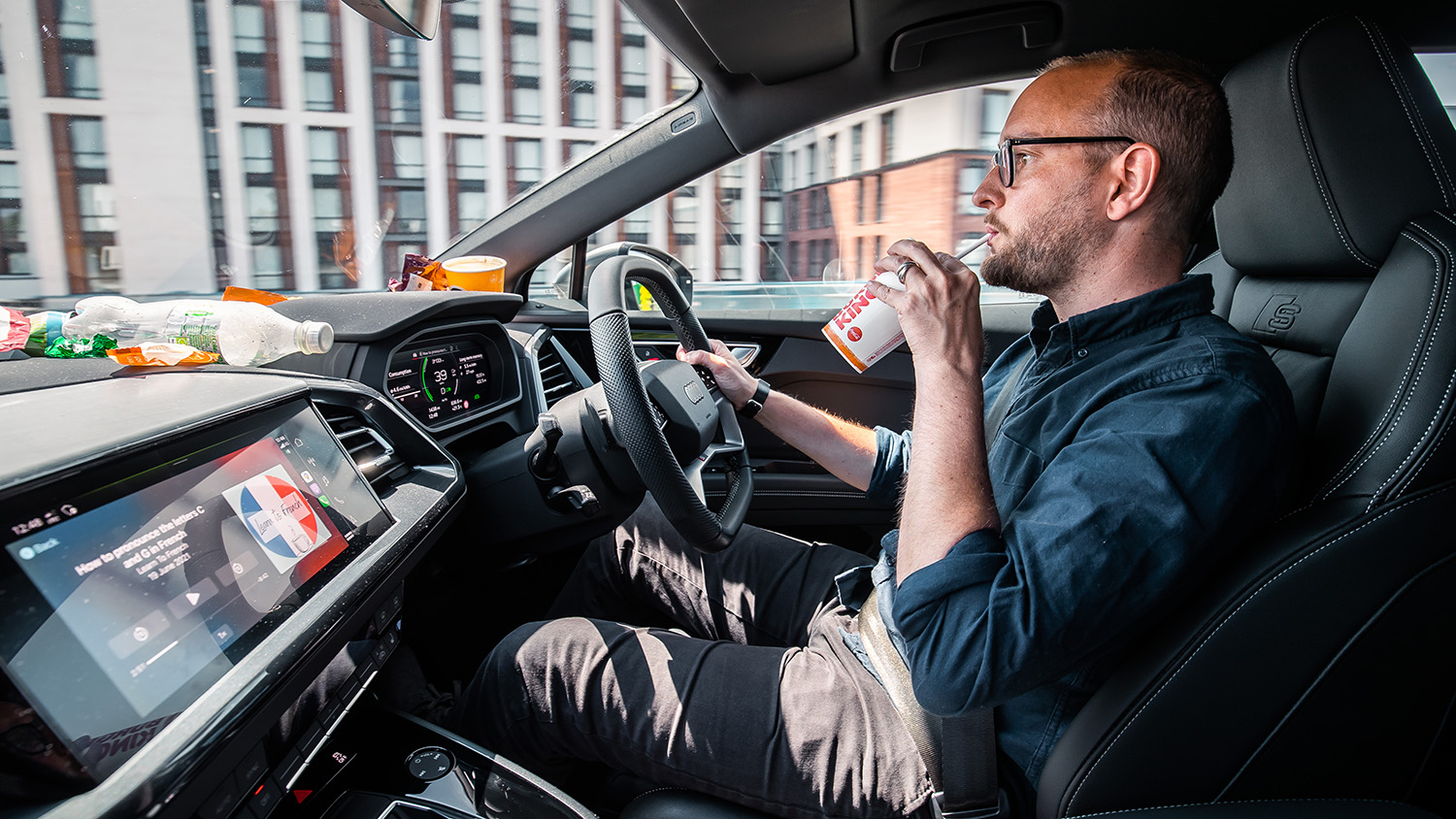 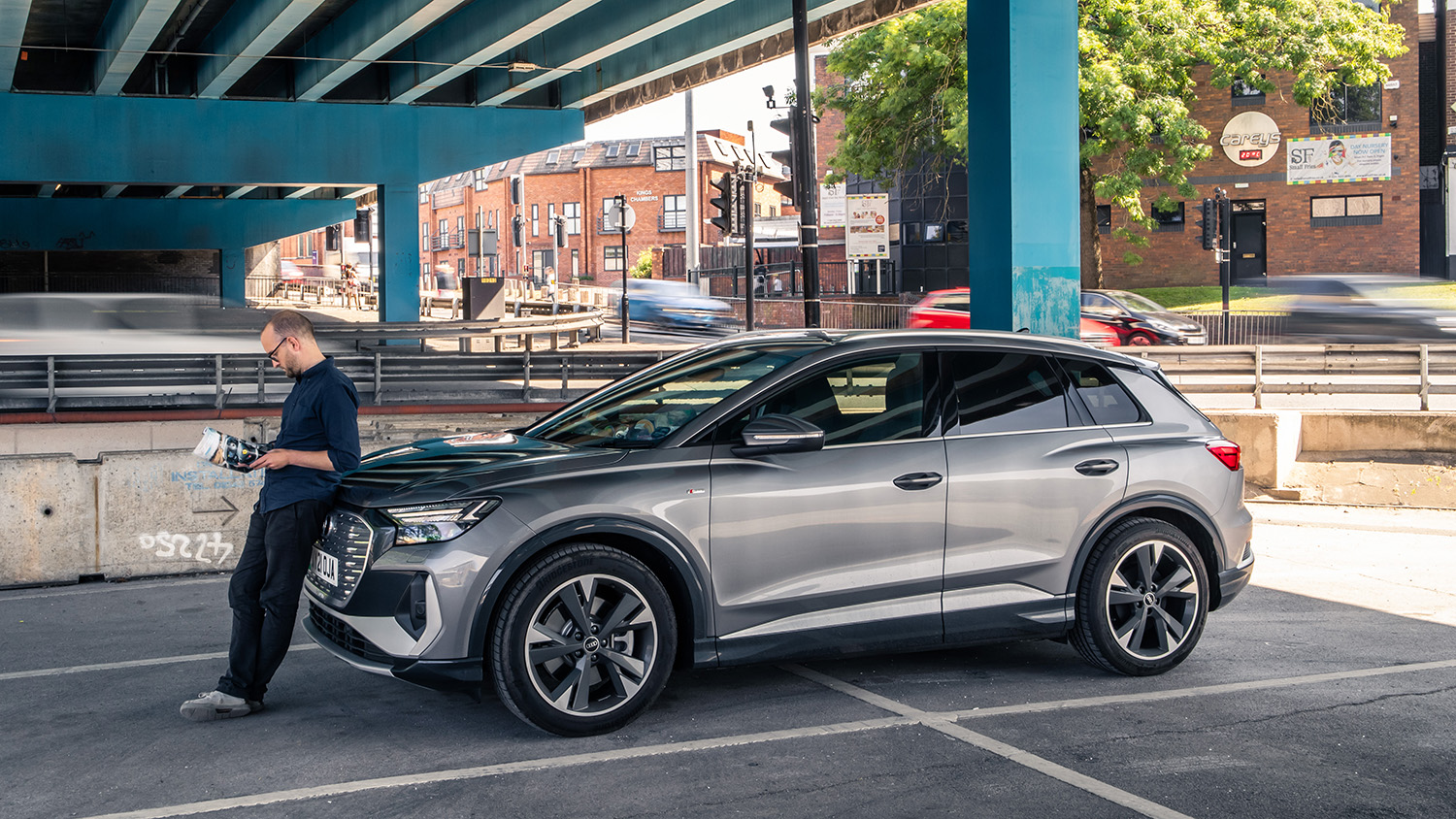 This ring of road though, it represented the dawn of a new era in the eyes of the city’s bigwigs. Coventry was a hub of manufacturing greatness, the jewel in the crown of global automotive manufacturing. The bicycle as we know it today, that was invented here. The first tank, dumper truck and car indicators were all innovations that came out of Coventry factories.
That burgeoning hope of the Fifties and Sixties dissolved in the Eighties and Nineties as the jewels were pawned off, the ring road and grand vanity projects of yore became scars on the landscape. It polarises people, Coventry. Academic and musician Michael Lightbone made an actual EP of sounds recorded through the ring road’s concrete pylons, music described as having “an industrial bleakness that’s hard to beat”. We can all surely agree that in its bleakness Coventry is second to none.

I’m feeling pretty bleak behind the wheel of the Audi, though I don’t think it’s the car’s fault. The run started off very unpromisingly, 3.9 miles per kWh on the first lap. At least I’d be finished by lunch. Slowly improving, up to 5.2mpkWh by lap 10. It’ll need to be better than that. I was in touch beforehand with TG’s international man of electricity, Paul Horrell, to talk tactics. Very technical, hard to pull off, but essentially his advice boils down to drive really slowly and don’t use anything in the car.

Except the infotainment, I’ll need to use that. I spend the first few hours learning French – I basically just ate crisps through the last two lockdowns, may as well try and better myself during this car-based removal of freedoms. I’m eventually able to faire une réservation pour une personne à 19 heures, if I can ever escape this hellish lazy river. It’s taking all my self-control to resist the urge to hoof the accelerator and just get it over with – after all, if 200 miles is the best she can do it can’t be helped. Acceleration is alarmingly perky even with the eco settings turned up to 11. 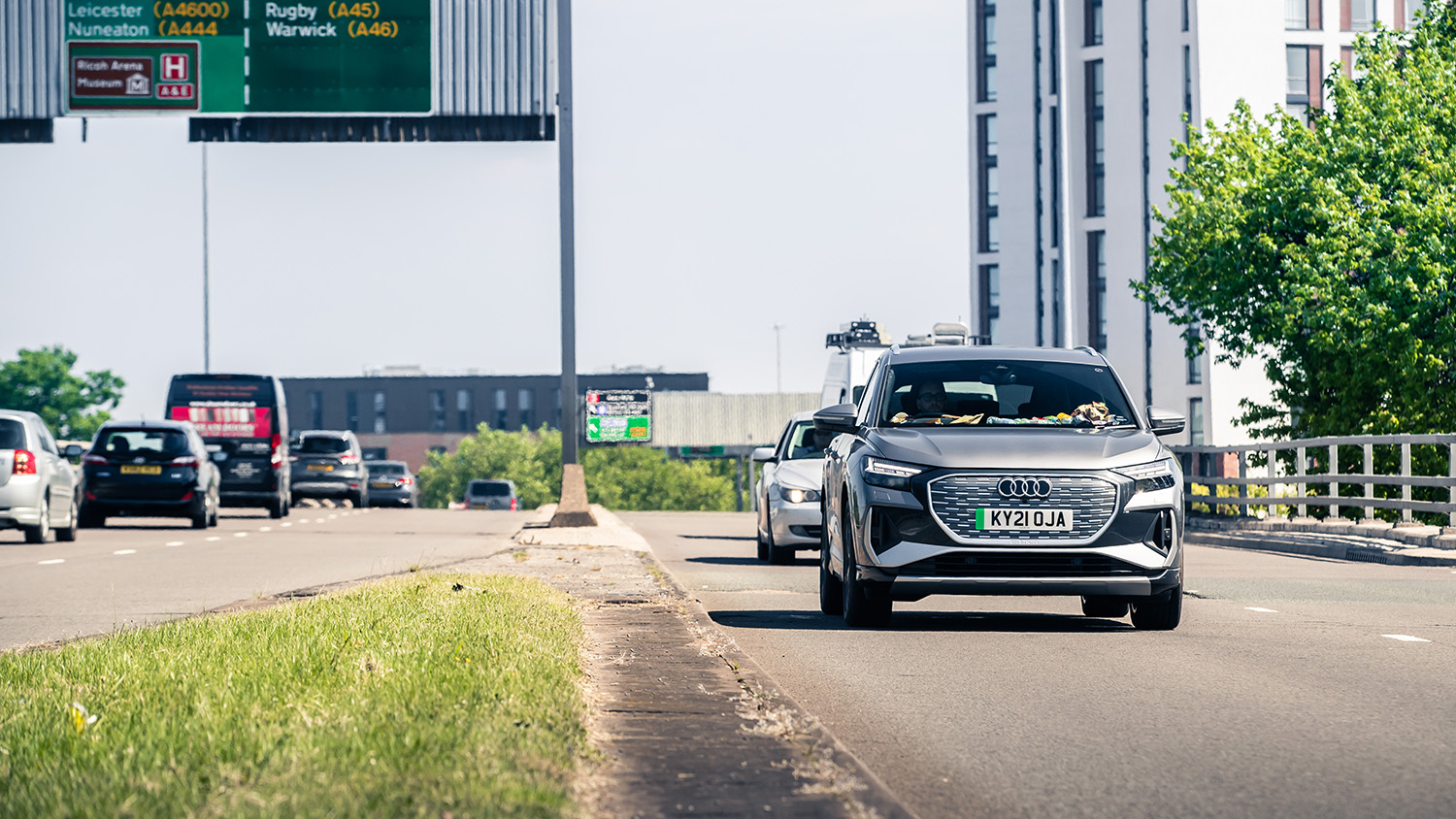 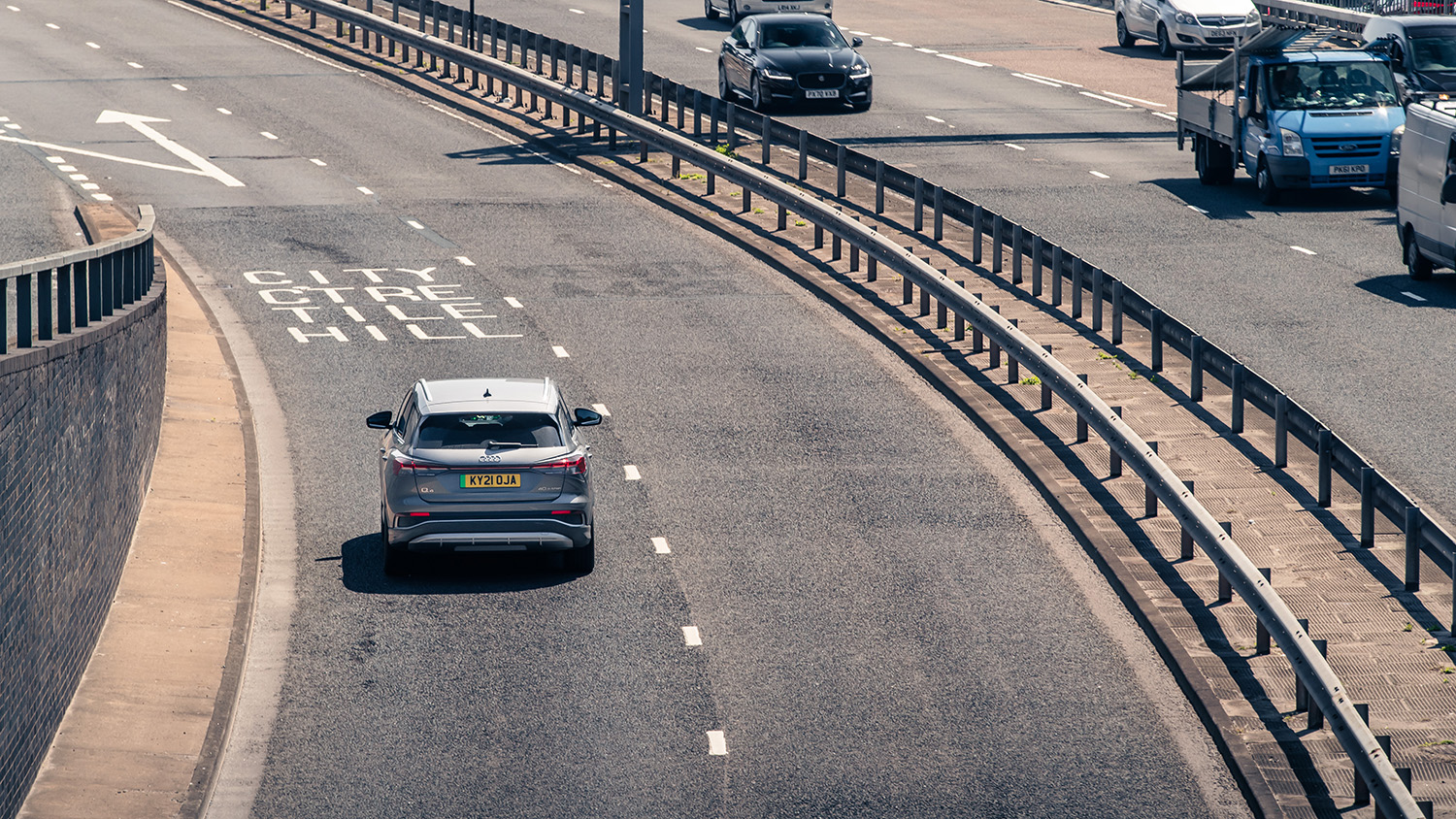 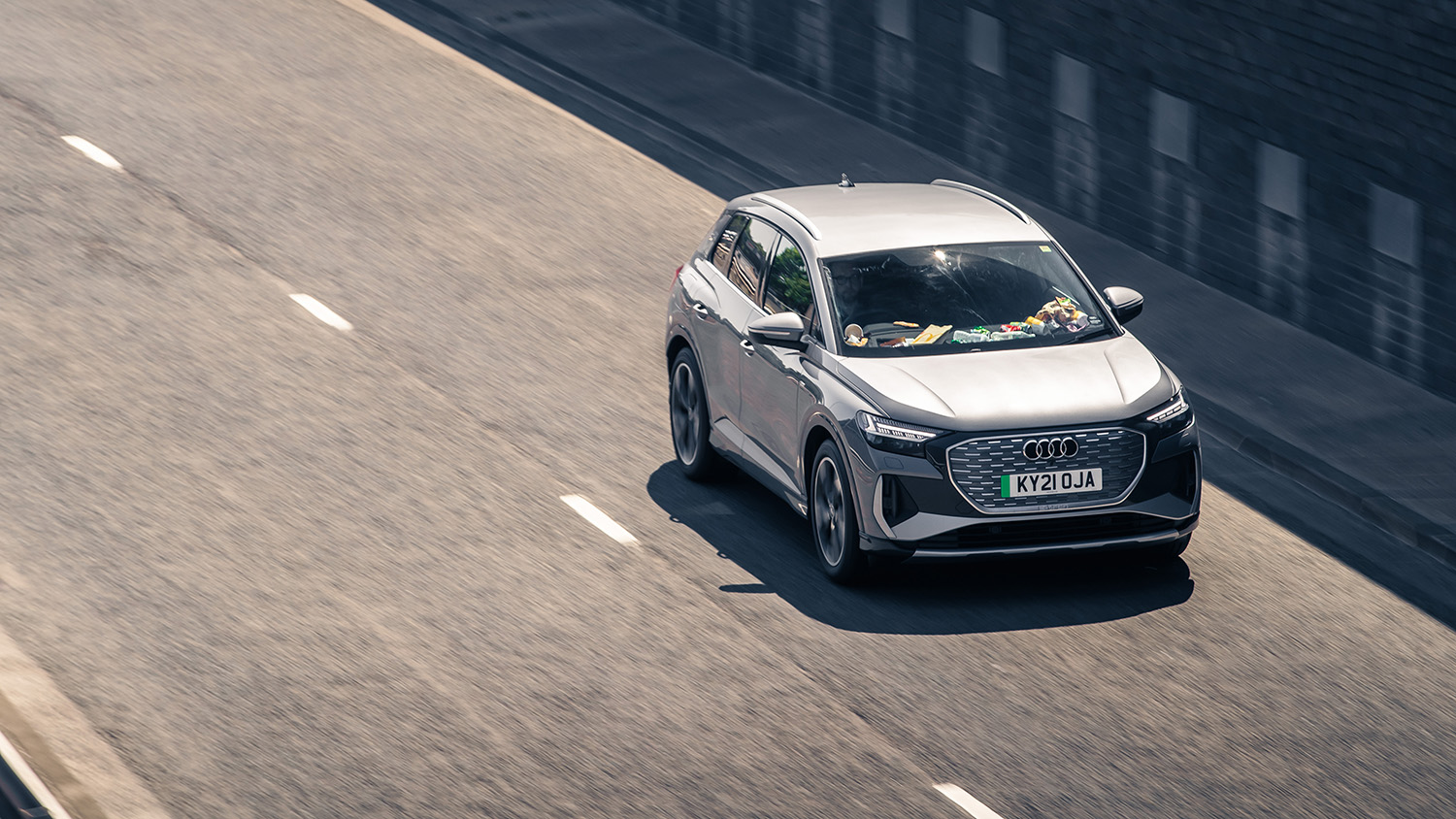 I rattle through my podcasts, listen to some music. Lap after lap after lap, endlessly round and round. I’m not sure if I’m starting to feel dizzy. I start off anticlockwise for four hours, then I try it the other way round to balance out. It feels a bit more frenetic on the clockwise trek, the merges that little bit crazier, the traffic a smidge busier. I swap back after another four hours. And so time passes.

I dwell on my mortality, on the loved ones left behind. On the fact that my selection of meat flavoured own brand crisps all taste the same. On the irritatingly stunted place names plastered on the tarmac because the full name won’t fit – places like KEN’TH, NUN’TN and W’WICK that I remember from my childhood. On the fact Audi reckons it’ll sell 20,000 of these things next year, which will make it the second most popular Audi in the UK after the A3. Serious numbers, and a sign the EV has reached the mainstream.

Around hour 10 I hear some comical tooting as I sit at the lights at junction one’s roundabout, the sole interruption in the ring road’s otherwise seamless loop. My dad has appeared in his austerity mid-life crisis Smart cabrio. He’s just off to do some work, but yells through the window that he’s making sausage, beans and mash later. The dinner of champions, I hope. He trundles off at speed – more speed than me at any rate – and I make a mental note to tell him his left brake light is out. Dad, if you’re reading this… 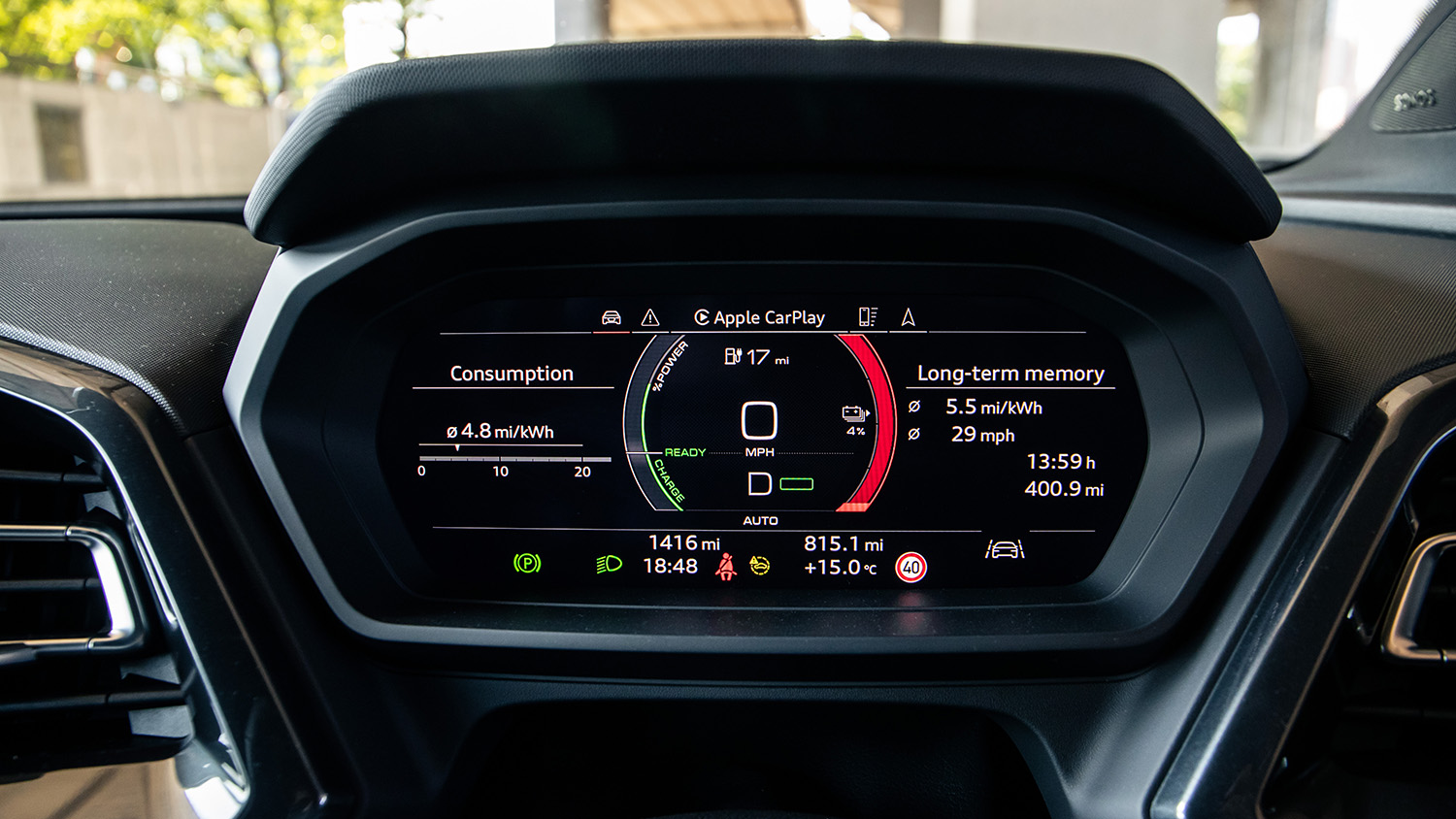 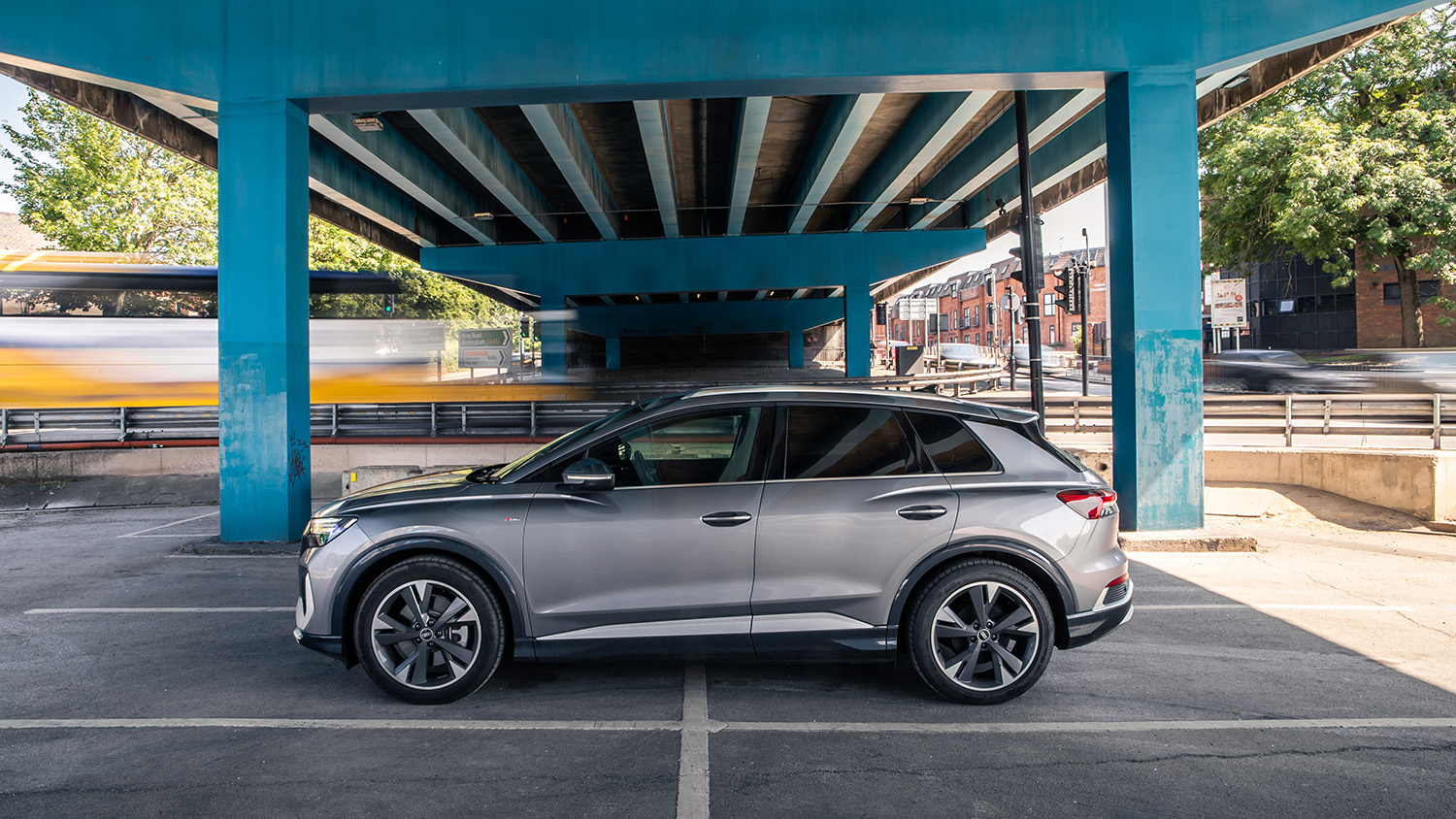 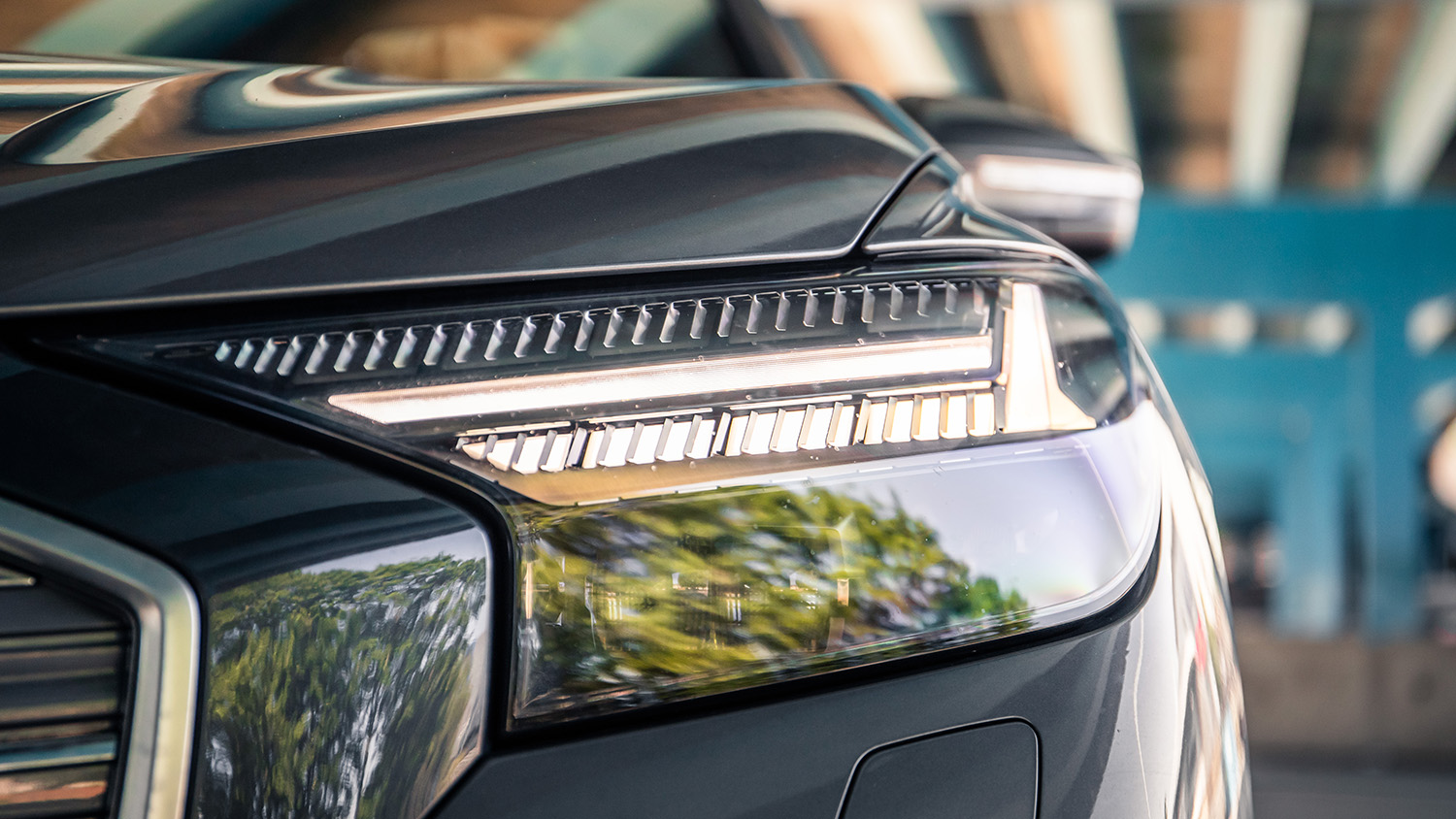 The ring road just wouldn’t be allowed today. It’s madcap, hare-brained, dangerous. A miasma of twisty turns, blind brows that fire you into traffic coming from all directions, endless roundabouts. It’s a cruel joke on the unsuspecting motorist, the true mark of a seasoned Coventrian being the ability to fling the car across deadly merges with abandon. In fact, the first thing my dad asks when I tell him about the challenge is whether I’m going to drive the ring road ‘properly’. You’re supposed to keep to the right until your junction comes up, to make it easier for cars to get on and off. I try it, but dawdling at 33mph feels safer in the outside lane.

Lap after lap after lap – 177, in fact. There’s still four per cent showing on the battery, but mum is calling me in for dinner. Needs must. I’ve spent 14 hours coaxing the Q4 e-tron round the Coventry ring road at an intolerably glacial pace. Those 177 laps make 400 miles, at 5.6mpkWh. Mincemeat of the 312 miles of official range. I’ve stared Death and Boredom in the face – close cousins, don’t you know – and come out the other side. A hero? I don’t like to use the word. But maybe. 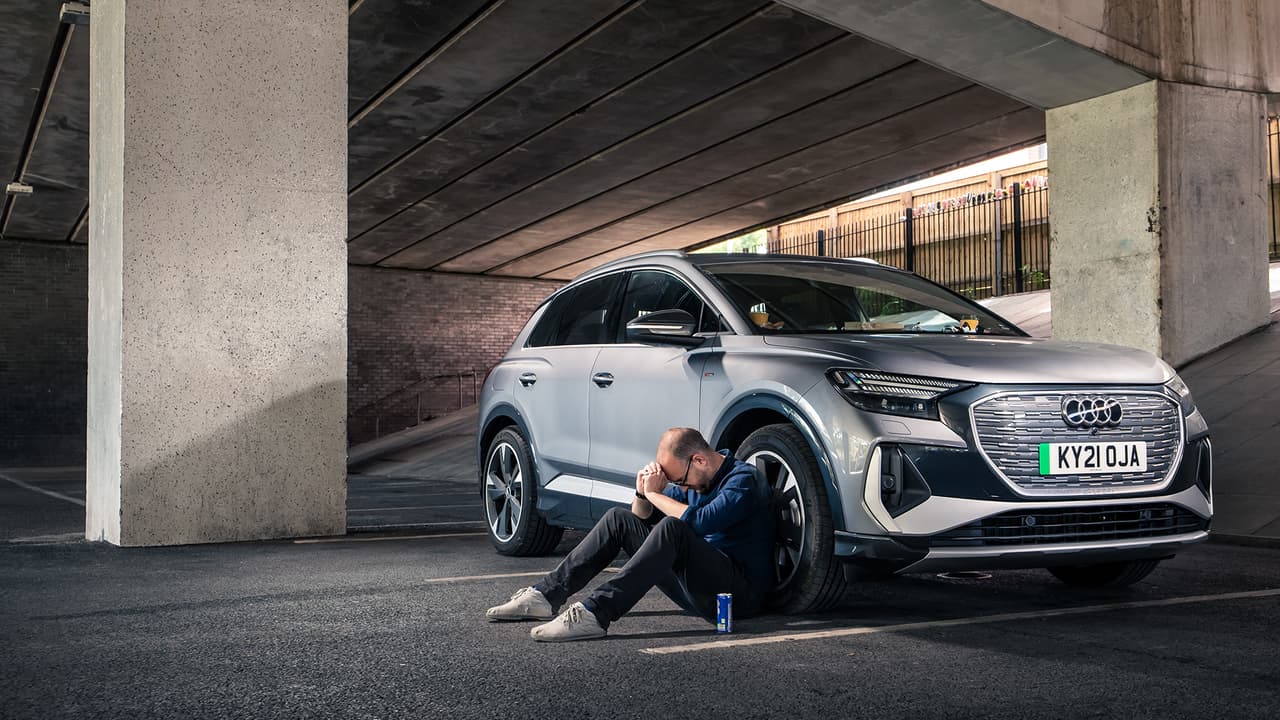