TG meets the Bentley EXP 12 Speed 6e, a convertible supercar that emits nothing 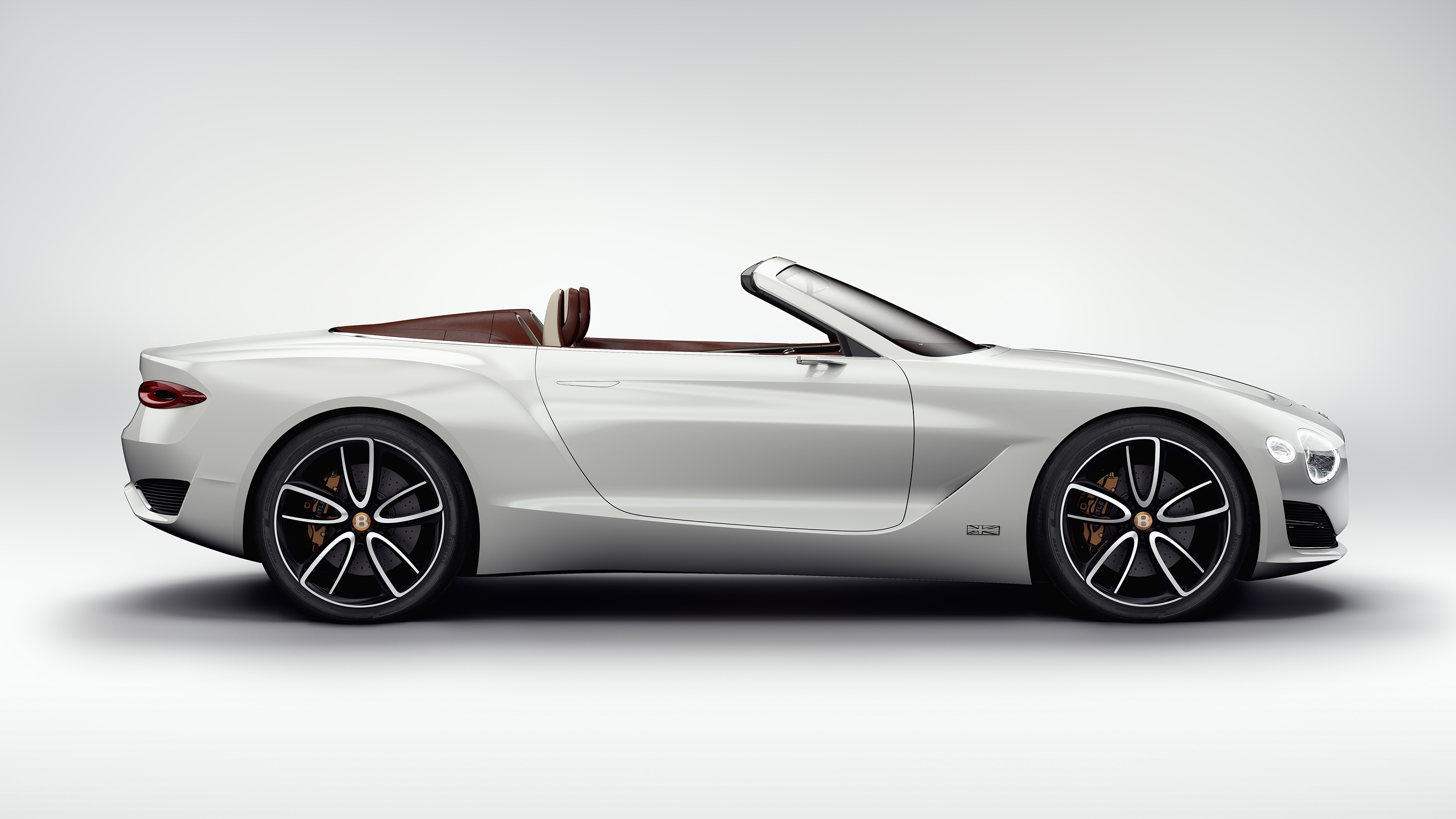 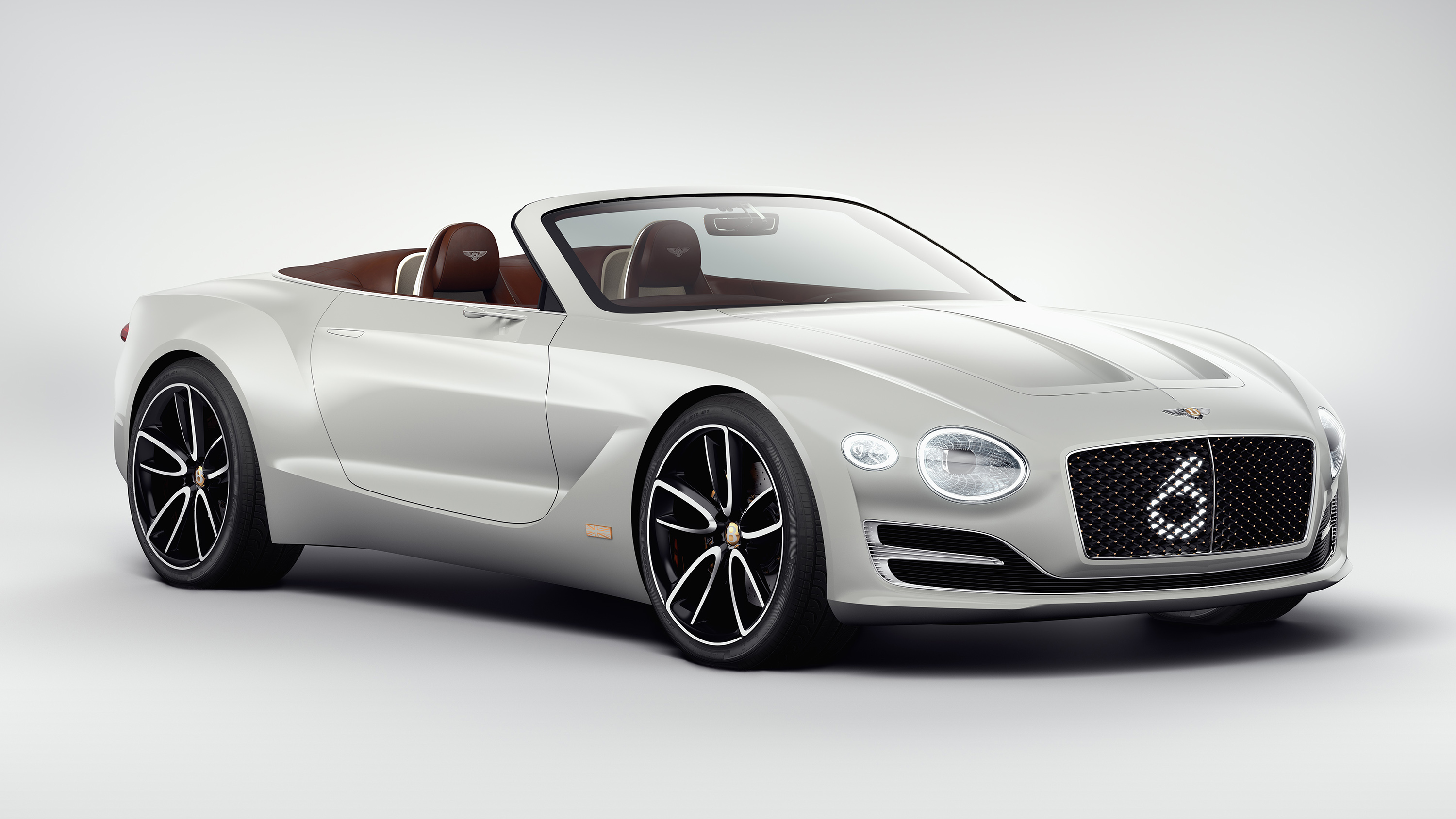 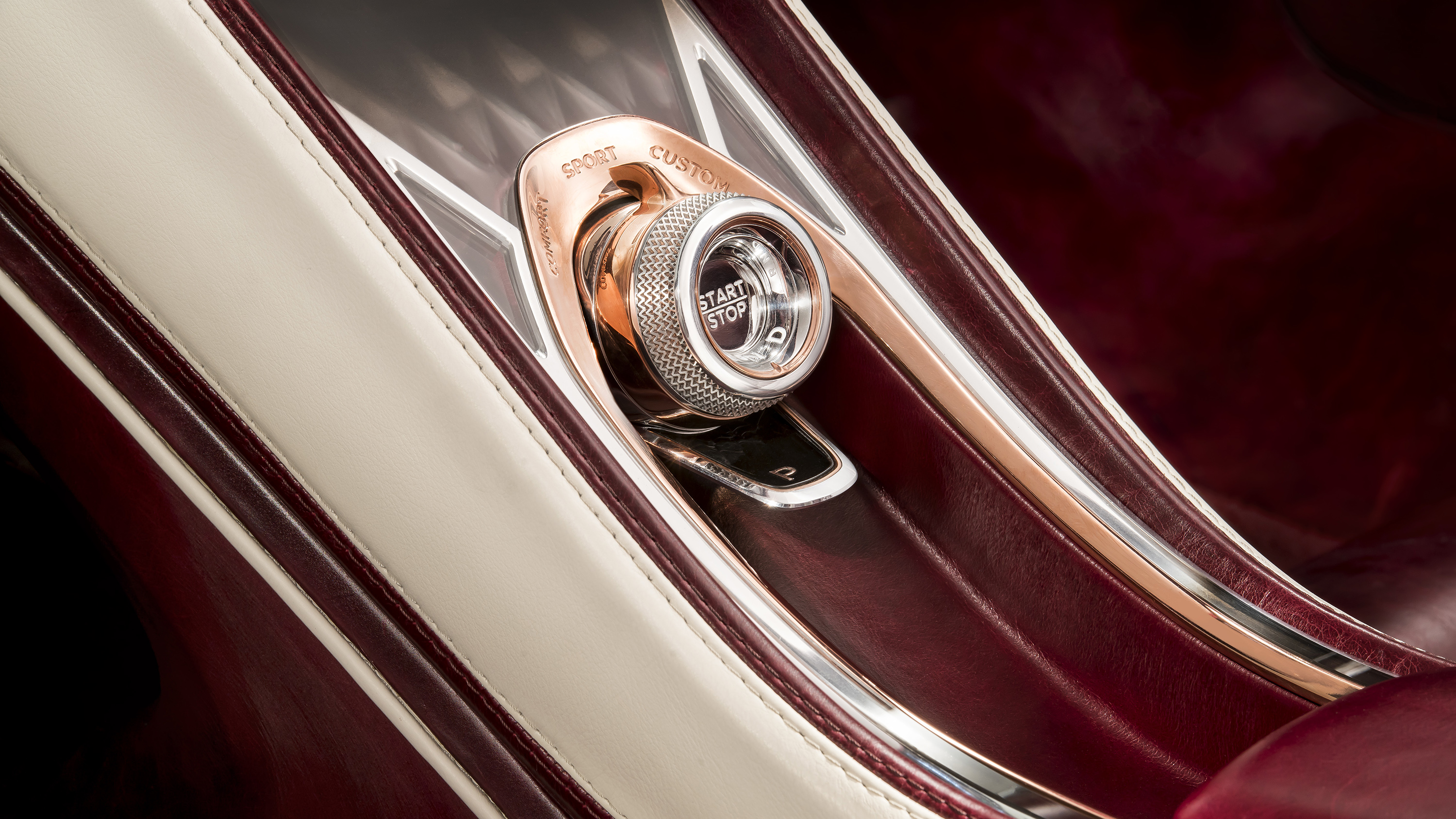 Have you heard the one about the electric Bentley? While the rest of the Geneva motor show seems to be all about speed, it’s the British luxury marque that’s bothered to make an environmentally friendly car. Go figure.

This is no Leaf or Twizy rival, though. It’s a very pretty two-seater convertible that reminds us of the Aston Martin V8 Vantage Roadster.

But beyond that, it also shows us what form an electric Bentley could take. Which doesn’t seem to be hugely different to a regular, petrol-powered 12-cylinder Bentley.

So all the key Bentley identifiers are present: large honeycomb-effect mesh grille, twin round headlights, and copious flying Bs. But everything’s been given a subtle makeover for the Speed 6e’s electric propulsion. So copper detailing is picked out exquisitely in the grille and the Bentley badging, a theme which really continues inside.

There’s some incredible detailing that is surely wasted on the quick two-minute shuffle inside most Geneva-goers will enjoy. Many surfaces are interwoven with copper, plenty others beautifully knurled. Those diamond-design door inlays, meanwhile, are each carved from a single piece of wood. The labour required is quantified as “a number of hours”.

The interior highlights even casual onlookers will spot, though, include separate ‘pods’ for driver and passenger, marked out by some fairly bold sculpturing, and that steering wheel.

“We wanted to do something ‘concept car’, and I think it was a nice opportunity to do this kind of open-top to really open up this space,” Gregory comments on the wheel. Those copper rocket buttons trigger an electric boost mode for the drivetrain.

Only they don’t, not yet. This concept car only has enough electrical power to move it on and off show stands, and there’s no hypothetical combination of motors and batteries, nor a power figure, that Bentley wants to discuss. You’d imagine four-wheel drive, clever torque vectoring, and north of 600bhp in a production car, though.

Success
Skip 7 photos in the image carousel and continue reading 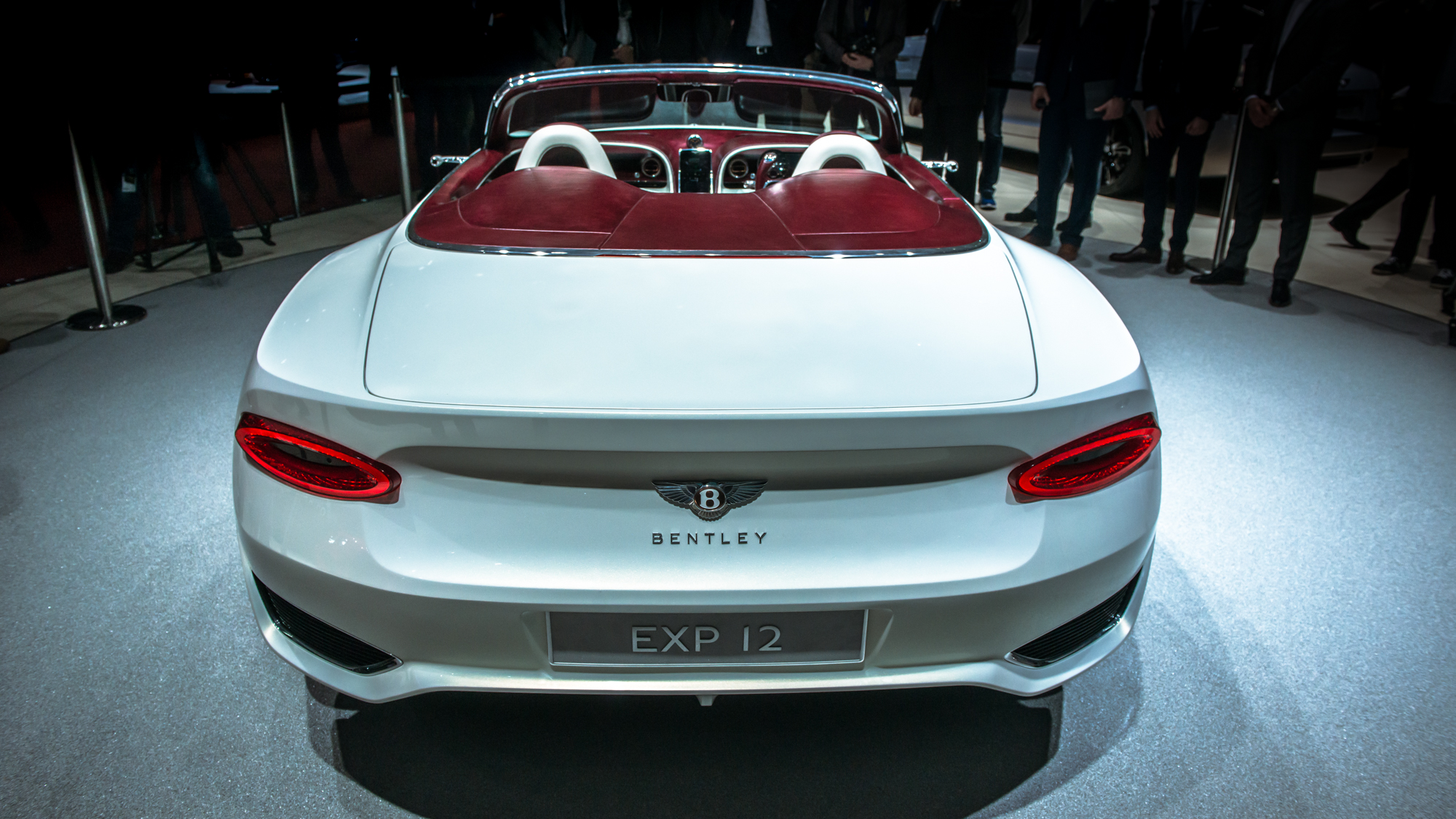 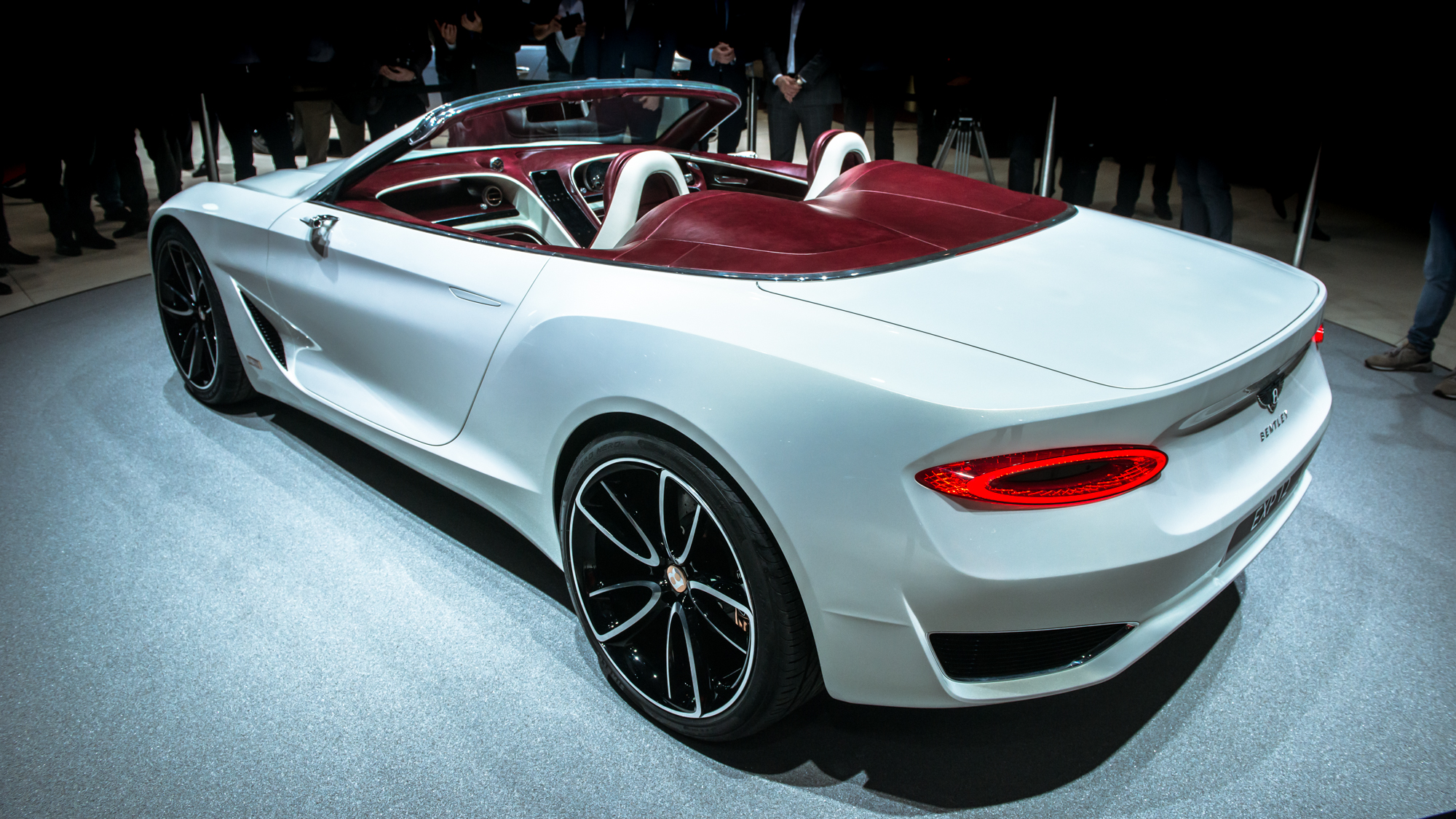 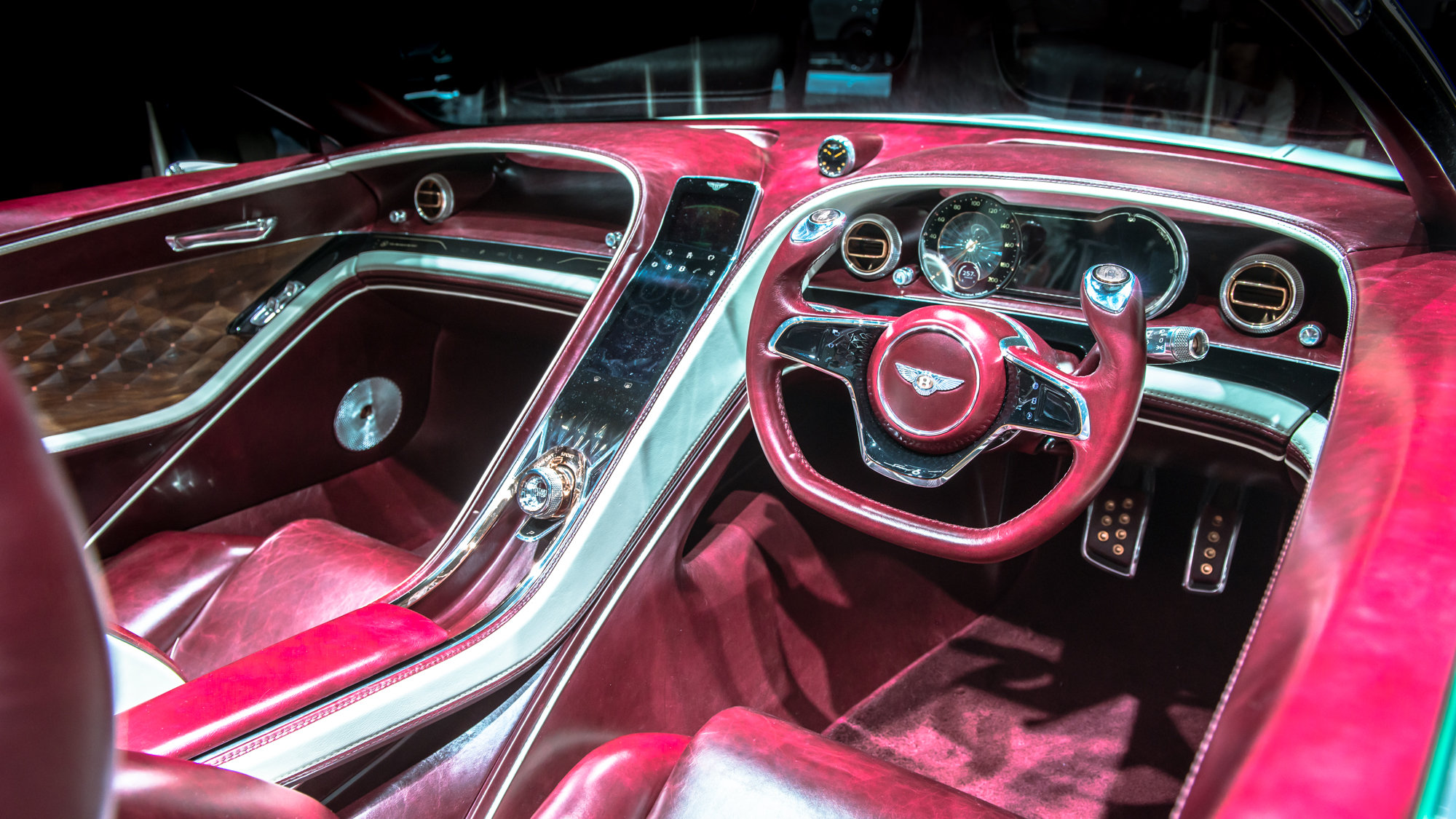 All the design team will confirm is that driver and passenger will sit between batteries, not on top of them. And given Bentley says you should be able to drive between London and Paris in one go, they’ll provide a realistic range of at least 300 miles.

The Speed 6e’s lack of a traditional engine has allowed this to be sleek in a way no Bentley has been before. Note how short the front overhang is, how low the bonnet sits. That would be impossible with a whopping great W12 in there. Not that Gregory wanted to take the opportunity of ditching a big petrol engine too far.

“You imagine maybe another car in this car’s class, say a Porsche or Aston Martin, they're always extremely, extremely low. For us it's all about, okay, what is the Bentley? It's a little bit more upright, a little bit prouder. It feels like it could drive through a brick wall and still be standing.”

Not something worth trying at home, we suggest. Other highlights? The passenger gets their own screen to view social media and sort out their appointments. The driver’s instrument binnacle folds away into the dashboard, its opening and closing the focal point of theatre when you start or stop the powertrain, in lieu of actual engine noise.

And the large sweeping touchscreen separating driver and passenger (hewn from one solid piece of glass) contains its own butler, a hologram of a man in a tux to represent the artificial intelligence you communicate with when operating the car. Note the tuxedo button on the steering wheel, for summoning him…

A car like the Speed 6e is still around five years in the future, Bentley’s designers tell us. The plan is to drip-feed a shift to electrification – starting with a Bentayga plug-in hybrid in 2018 – to avoid frightening surely one of the most traditional ownership sets in the car business.

But some of the Speed 6e’s design elements – crystal cut headlights included – will make it to a production car that’s not far away at all.

Over to Bentley’s director of design, Stefan Sielaff: “A lot of the details on the lines, and on the sexiness of the surface, are what we want to push into our future design language. And they are what you will find in our next generation of Continental GT which we will show to you in September, at the Frankfurt motor show, and in the cars to come.”

So if you like the looks, rest assured the next Conti GT won’t be a million miles off what you see here. Nor Bentleys beyond it. But how about the electrification? Is that right for a Bentley? Tell us below...