Everything we know about Tesla’s all-electric truck 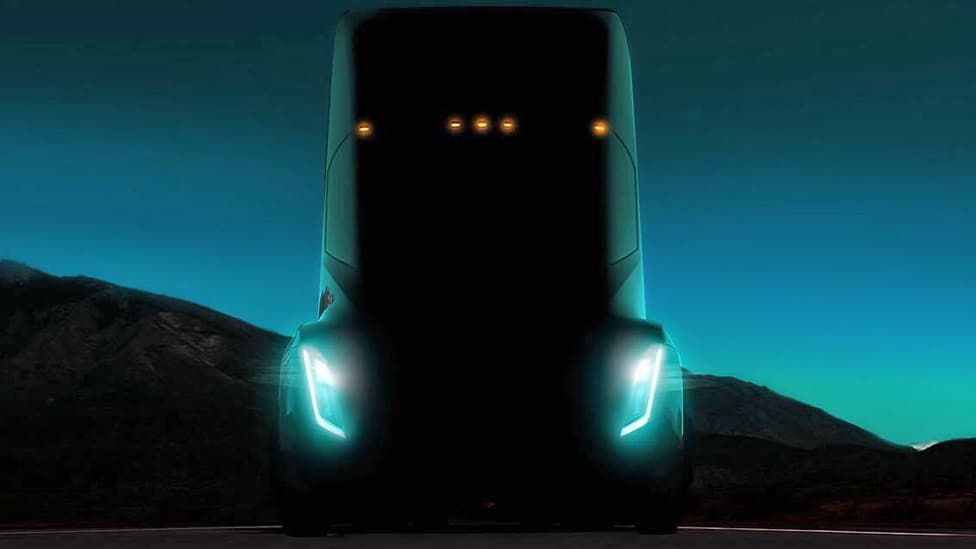 Tesla’s next big reveal will be a fully electric and potentially autonomous heavy-duty haulage truck.

Forget glamorous saloons and SUVs – it’s time to go hard or go home. The aptly dubbed Tesla Semi comes as part of ‘Master Plan Part Deux’ – the business model released in July 2016, ten years after the original company plan – and promises another decade of game-changing products from the all-electric brand.

As anticipation – and Tesla CEO Elon Musk’s Twitter feed – heats up, what do we know about the Semi so far?

The official unveil will be on October 26… maybe

Taking to Twitter, as all modern billionaires do, Musk announced the Tesla Semi was “tentatively scheduled” for unveil in late October at the SpaceX facility in Hawthorne, California. Musk also added it was “worth seeing this beast in person. It’s unreal.” The reveal has already been pushed back from September, though.

It’s only a semi

The upcoming unveiling will be for an all-electric semi-truck, or a typical articulated lorry. It’s unconfirmed if the Tesla Semi will be its final production name, although Musk hinted at this in a tweet back in April: “Tesla Semi truck unveil set for September. Team has done an amazing job. Seriously next level,” he said.

Musk confirmed at Tesla’s 2017 Annual Shareholder Meeting that the Semi will be a functional prototype that has already been the talk of the town with potential customers.

“We have shown it to a number of people who buy heavy duty trucking and they all love it. They just want to know how many can they buy and how soon,” said Musk.

He added that clients have also been involved in the design process: “The biggest customers of the heavy-duty Tesla Semi are helping ensure that it is specified to their needs. It’s not a mystery. They already know that it is going to work because they’ve told us what those needs are.” Full production capacity is to be expected within 18 to 24 months.

It won’t overhaul the haulage game…

It’s reported that the Semi will have a range of 200-300 miles on a single charge. That quite easily rules it out of most trans-America expeditions, where diesel alternatives can cover 1,000 miles on a single tank, so instead of a long-haul trucker, it will likely focus on regional trips, making up 30 per cent of all trucking jobs in the States. That’s still a pretty big piece of a portage pie, though, especially on a plug-in basis.

After a meeting with Tesla, Executive Scott Perry from Miami-based fleet operator Ryder System Inc told Reuters that the semi will also be a day cab, meaning it won’t have a sleeper berth.

“I’m not going to count them out for having a strategy for longer distances or ranges, but right out of the gate, I think that’s where they’ll start,” Perry said.

…but it is heavy duty

Speaking to TED organiser Chris Anderson in April, Musk prophesised how the electric truck would overtake the rest of the segment. “It is a heavy-duty, long range semi-truck, so it has the highest weight capability for the range. Essentially it’s meant to alleviate the heavy-duty trucking loads. This is something which people do not, today, think is possible.

It could be “the biggest catalyst in trucking for decades”

Analyst Adam Jonas from New York financial giant Morgan Stanley has been keeping a close eye on the all-electric truck. In a note released to clients at the start of September, Jonas wrote that: “We believe Tesla’s reveal of its autonomous, electric Class 8 semi-truck could be the biggest catalyst in trucking in decades and potentially set off separation between the technology leaders and the laggards among carriers, shippers, truck OEMs and suppliers.”

He speculates that an autonomous-electric truck could be up to 70 per cent cheaper to run than a diesel equivalent, too, which would indeed suggest the serious change to the future of the haulage industry predicted.

But it’s not the first

As Tesla delays the plans for their truck, a German rival has already been unveiled in production-ready guise. European auto giant Daimler, which owns Mercedes-Benz and Smart brands, has unveiled the Fuso eCanter electric truck, with first examples being delivered this year across Europe, Japan and the US. The first client for the eCanter will be UPS, adding to the New York fleet to help reduce emissions and noise pollution.

It won’t be sold with batteries…

Further analysis from Morgan Stanley shows that Tesla will adopt a battery leasing model for the Semi, meaning batteries could be swapped at stations in order to get drivers back on the road quicker.

“We believe Tesla could sell its autonomous, electric semis without batteries, which would then be separately leased to customers,” analysts Adam Jonas and Ravi Shanker commented.

“With a circa-250 to 300 mile range, these batteries could then be swapped out at battery swapping stations – we conservatively estimate that a truck battery swap would take at least five minutes – at Tesla Supercharging stations and truck stops around the country.”

They’ve estimated that Tesla could charge as much as $0.45 per mile and still save drivers up to 50% in fuel costs, as well as reduced maintenance due to the lack of an engine. The Semi is thought to cost around $100,000, without the battery leasing.

…nor autonomy, to begin with

It’s unlikely that the first generation Semi will be a fully autonomous truck, both because that would be a monumental task and also terrifying for anyone on the road.

When Musk first announced the Tesla Semi programme, he added that the truck will “deliver a substantial reduction in the cost of cargo transport, while increasing safety and making it really fun to operate,” suggesting a driver will still be a necessity.

There’s also a pick-up on the horizon

Another part of Master Plan Part Deux includes a pickup truck, confirmed again via the medium of Twitter. Replying to a pick-up fan, Musk confirmed that it would make an appearance “within 18 to 24 months”. He also hinted at a ‘light-duty’ model, responding to another fan with suggestions of “a mini version of the Tesla Semi”.

And that’s not all, folks

Ever the temptress, Musk concluded his Annual Shareholder Meeting in June by saying: “I really recommend showing up for the semi truck unveiling – maybe there’s a little more than what we are saying here.” Could there be more secrets to announce? Is there something extra to be unveiled? Or will Musk just be sporting a particularly fetching tie? Only time will tell…