VW’s all-electric newbie should crush Nissan’s old guard, but does it stack up to the mighty Tesla? 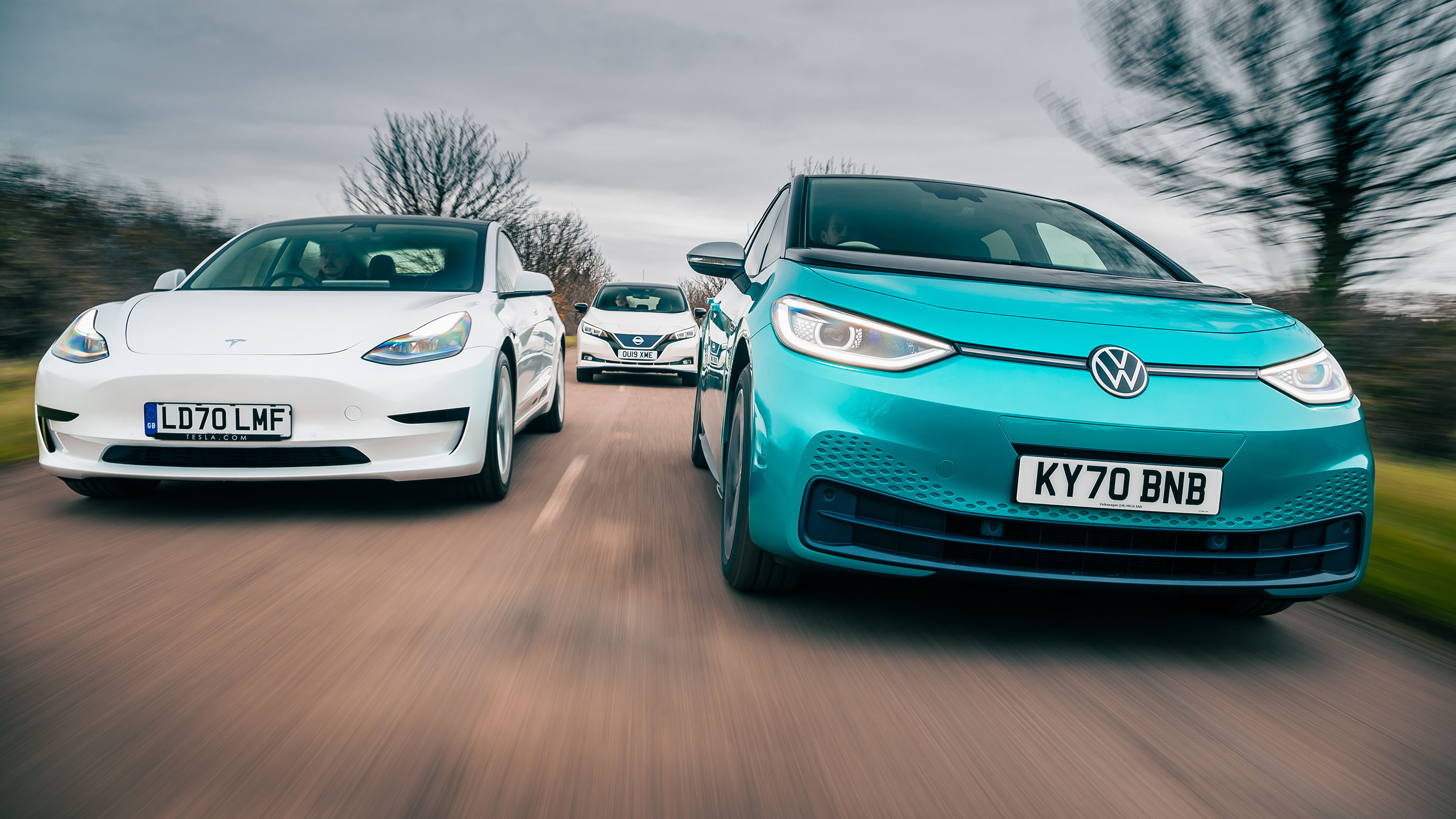 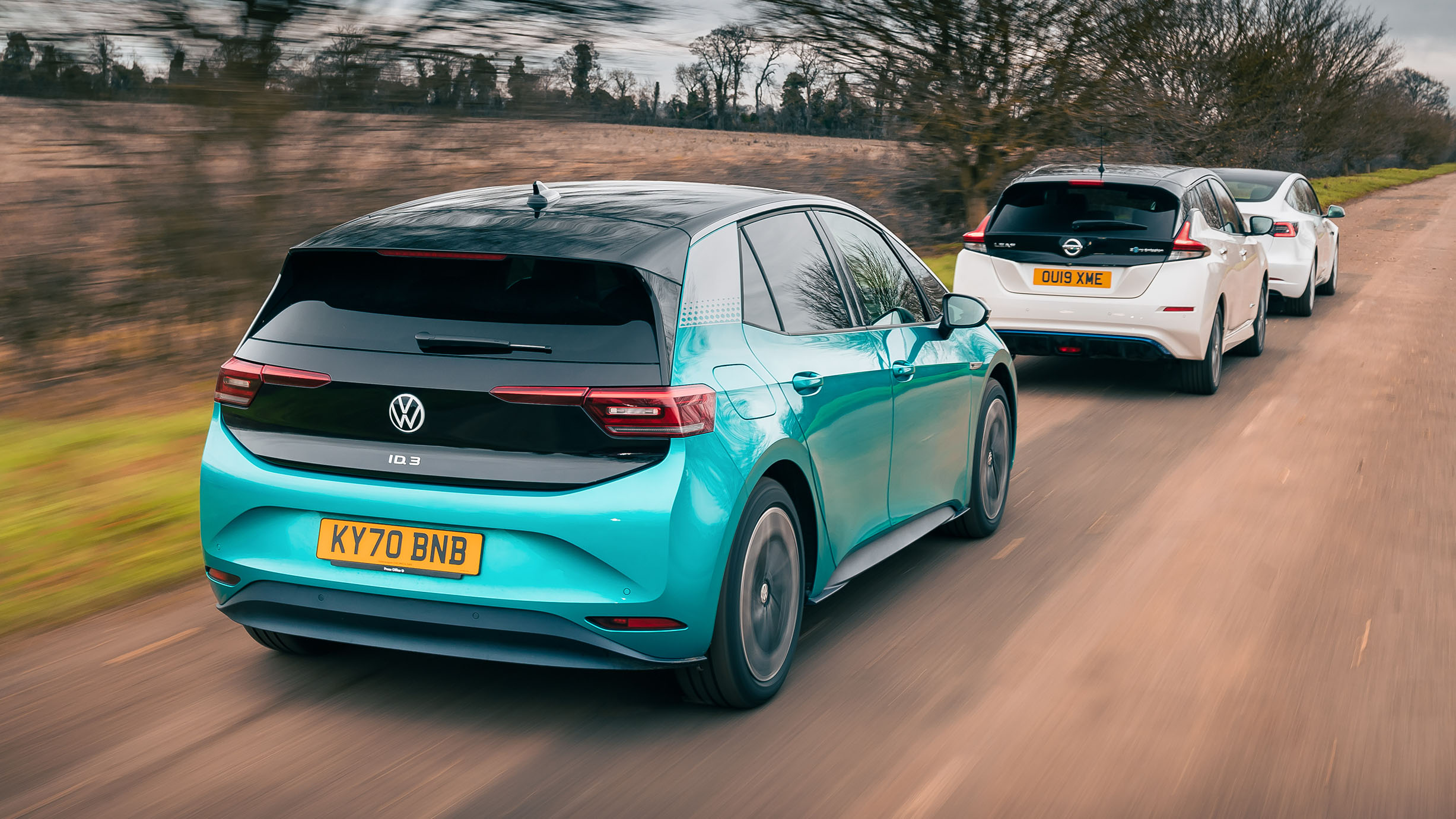 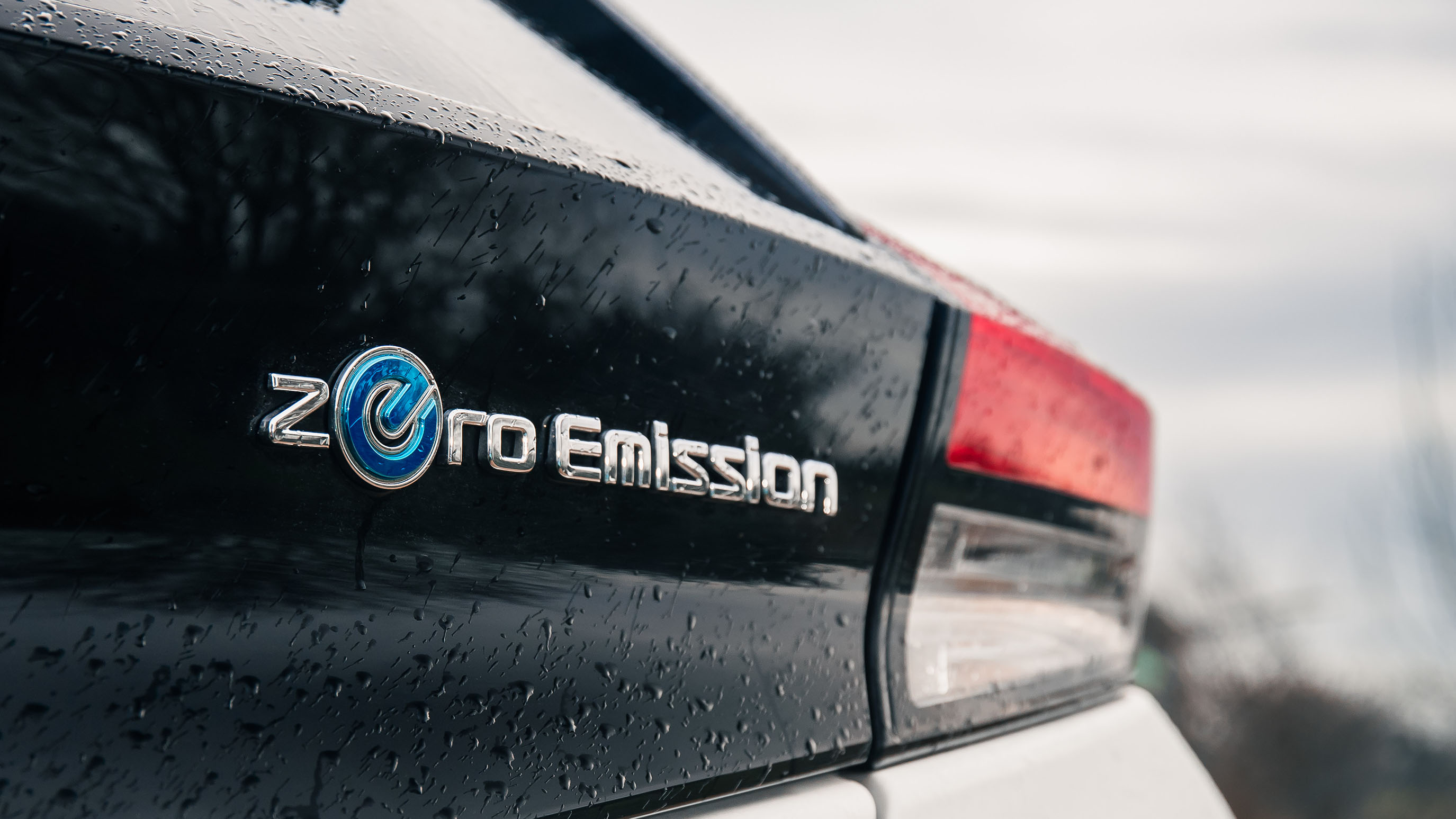 A Volkswagen usually arrives at a hatchback test as the benchmark, Mr Defending Champ, or at the very least, the Miss Goldilocks. Right in the sweet spot. VWs aren’t used to being the inexperienced virgin n00b. Today, the VW ID3’s chief enemy might not be the Tesla Model 3 Standard Range Plus, nor the Nissan Leaf e+. It’s God. Maybe He’s angry about all the emissions. November is doing its best to defeat VW’s new ID challenger with brass monkeys.

Against an official range of 260 miles, the ‘guessometer’ readout of this ID3 1st Edition, freshly unplugged and extracted from my garage into the frosty morning, can muster only 180 miles, which tumbles into the one-seventies as the heater is set just so on the grotesque double-chin hanging from the touchscreen. Mind you, ID3s we’ve tested in milder climes have barely promised more, and it's partly my fault. I haven’t pre-conditioned the heating to gently bring the stone-cold battery up to temperature. EVs, like teenagers, are grumpy about early starts on brisk mornings.

We’re not going to blindly fixate on range today. Range is one-dimensional. What’s interesting is efficiency. Promise. Stay with me here.

See, the smallest battery of these three belongs to… the Tesla Model 3. This entry-level £40k version makes do with rear-wheel drive, and a 55kWh battery capacity. If it were as inefficient as the 58kWh-equipped VW, travelling just 2.8 miles per kWh of electricity consumed, it’d manage just 154 miles between Superchargers. In fact, it’s sauntering along at 4.3 miles per kWh, meaning a 236-mile range is available, versus 267 claimed.

You’d presume Nissan’s frumpier-than-an-Oxfam-underwear-sale Leaf couldn’t hope to compete with the might of newer, sharper contenders, and you’d be as wrong as me.

Instead of the standard Leaf’s 40kWh battery and single, front-mounted 148bhp motor, the ‘e+’ upgrades to the largest battery pack of the trio – a hefty 62kWh – and 215bhp. The three-year old Nissan matches the less bulky VW’s 2.8 mpkWh consumption, and when its wildly indecisive computer makes its mind up, offers between 175 and 192 miles before nosing up to another charger.

We know that, posed against po-faced competitors, Teslas are invariably the quick ones, the efficient ones, the fun ones with Fart Mode and the lucky ones least dependent on a haphazard charging ecosystem. Even this basic version with a single rearward motor and only Chill/Sport acceleration settings for develops 235bhp and punches to 60mph faster than a £55k Jaguar F-type, never mind either these rivals.

What’s surprising is the scale of Tesla’s lead in the power consumption stakes. You’d have expected Volkswagen to have it sussed. To have bided its time until it could saunter into the fray and crush the American upstart, but it’s no closer to cracking Elon’s nut than Nissan, who’ve been toiling away with electric hatchbacks for over a decade.

The Leaf feels the oldest product here – which it is – but it’s easily the least intimidating baby-step into the warm waters of electrification.

Inside, it could easily be a Qashqai. Same switchgear – praise be, some actual real-life buttons – same semi-raised, stunted driving position (apparently resolved in 20-plate cars which finally have adjustable steering column reach), and the same whiff of petrochemical man-made fibres and the ambience of a Zack Snyder film. The semi-digital instruments look like they’re from the 1990s, the touchscreen operates like it actually is, while the thick pillars and cramped rear seats make this clean-sheet bespoke EV feel about as spacious as a RyanAir 737.

This morning, I’m grateful the front chairs are laudably comfortable, as if they’ve been transplanted from an American SUV, and it has the most effective heater of the set. While the chunky switchgear looks as dated as a Japanese hi-fi, it’s less fiddly than the other two.

Volkswagen has packaged its electric hatchback more cleverly, but the details grate. The ID3’s overhangs are shorter. Front visibility is panoramic thanks to slimline split A-pillars. With the motor out back, the ID3 not only offers pleasantly crisp, uncorrupted steering, but the tightest turning circle of the three, whizzing back from whence it came in 10.2 metres, like an Up.

Up front, the wee speedo screen moves with the steering column, and the driving position is just a smidge more upright than a Golf’s, with captains’ armrests adding to the chilled, wantonly un-sporty vibe. This car’s dubious ‘ArtVelour’ wipe-clean upholstery already feels like it’s been recycled one too many times, but the optimistic white touchpoints can be no-cost optioned to black to avoid clutching a steering wheel resembling a Victorian chimneysweep.

You sense VW could’ve been more ambitious – more BMW i3-ish – with how it rearranged the furniture, but besides the open-top tunnel of floor stowage all of the glossy, haptic innovations have already made our teeth itch in the latest Golf GTI. The dash-crowning ‘ID Light’ which pulses when you address the ‘Hello ID’ voice control is more Windows Vista 2000 than 2001: A Space Odyssey.

Has VW maximised the advantages from this long-wheelbase 21st Century groundbreaker? There’s no ‘froot’ in the nose – under-bonnet space is reserved for the air-conditioning system, where the Tesla gives you a bonus cargo bay up front. The 385-litre boot’s nowhere near as deep as the Leaf’s because of the 90kg motor-gearbox gubbins plumbed underneath, and that matters when bulky, crud-incrusted charging cables need to be carted around.

In the middle, the ID3 is indeed roomier than the Golf which will take up the same space on your driveway, with a flat floor and seating for three at a pinch. Headroom is a mite tighter than the Tesla, but both cars are glassy and relatively welcoming compared to the Leaf, which is what gave Carlos Ghosn the idea of hiding in a cello case. In other areas too, the Leaf is starting to show its age. The air-cooled battery saves weight, but because it has to throttle back on charging rate to protect the cells compared to its liquid-cooled rivals, it'll take 90mins to replendish 80 per cent on a rapid charger.

Wondering why we’ve made it this far without much mention of, ooh I dunno, what these cars are actually like to drive? That wouldn’t happen if this was Golf vs Qashqai vs Pontiac Aztek. How these things actually go down a road is probably the least notable thing about them.

The Leaf is a stoically dull but easy to use appliance. It spools up its front wheels on slippery roads, something the rear-drive VW is too grown-up to indulge. The ID3’s planted, accelerates breezily and its brakes blend re-gen and proper friction stopping seamlessly. There’s that familiar EV disconnect of sitting a little higher than a ‘normal’ internally combusting hatchback, but sensing the centre of gravity is slung so much lower. Less wind and road noise is admitted into the cabin than the Nissan, and though the ID3’s 19-inch rims suffer more on craggy roads than the Leaf’s sofa castors.

Here’s where Tesla’s relative inexperience bubbles to the surface. This is steering by CGI – horrid mismatched feedback and synthetic weighting does little to inspire confidence given how quickly the car can vault forward. It has the grabbiest brakes, though like the Leaf you can dial up the re-gen and treat it as a one-pedal car if you can stand the shame of your brake-lights illuminating more often than a L-plated Corsa’s.

With the VW and the Nissan, you’re not just paying for an EV – you’re getting the peace of mind that comes with building millions of cars a year, and not one of them in a tent. Tesla has a world-class product here, but I wish it’d spend less time on the gimmicks and concentrate on quality. This car’s tracking was like Fox News. Inaccurate, and alarmingly right of centre.

No, fit and finish is not cool. It won’t harvest Likes like the built-in Mario Kart and arcade games. But quality builds reputations. Though is Tesla a brand worried about customer loyalty? It’s a cult. I’m writing this from a witness protection safehouse.

As if to prove a point, Nissan sent a 10,000-mile Leaf into battle here, steering wheel buffed to a high sheen but otherwise wearing well. This is what the future of EVs would look like if Tesla hadn’t erupted onto the scene and gone viral with its Californian upstarts. The Leaf seems so flat-footed, so traditional. Caught on the hop like a Sony Walkman shelved next to an iPod. Standard Nissan really. As per the Qashqai and the GT-R, the Leaf failed to convert a lightbulb moment into an impeachable empire.

Same goes for BMW’s i cars. And the Renault Zoe, and even the adorable Honda e. They’re all one-off outposts. VW wants – needs – the ID family to be a heartland, volume-selling, stack’em-high household name. So there’ll be many more to choose from than this 1st Edition.

This will become the middling model, between 45kWh and 77kWh versions. Prices will match a well-specced Golf, spreading from £30k-£40k, where Tesla life begins. You’ll be financing them of course, and the feature-packed Tesla (albeit shorn of the needless £6,800 Full Self-Driving Package, which is nothing of the sort), is temptingly within reach.

Each have three grand shaved off the RRP by the government. Nissan will shill £500 of your £5k deposit, and this range-topping Leaf is yours for £445 a month. On the same terms (10,000 miles a year, 36 payments) the VW is cheapest at £425 and the Tesla way off over six hundred. If you’re happy just to lease it, the Tesla’s payments dip to £450 a month. This is the iPhone of cars after all. In 2024 you’ll be due an upgrade.

Here and now, Model 3 is the best EV. It’s the least hamstrung device. That efficiency and charging network offer valuable peace of mind. VW’s quest not to rock the boat has, very deliberately, resulted in a better product than Nissan’s honourably sensible but forgettable Leaf, but one that’s failed to bravely take the fight to Tesla’s front door. It’s a good car, the ID3, but a pulled punch. It’ll probably be pretty nice to live with, once you’ve accepted the unhelpful interior. Somehow, we expected more – a new benchmark.