Turbocharged, rear-drive two-seater lands in LA. Like the looks? 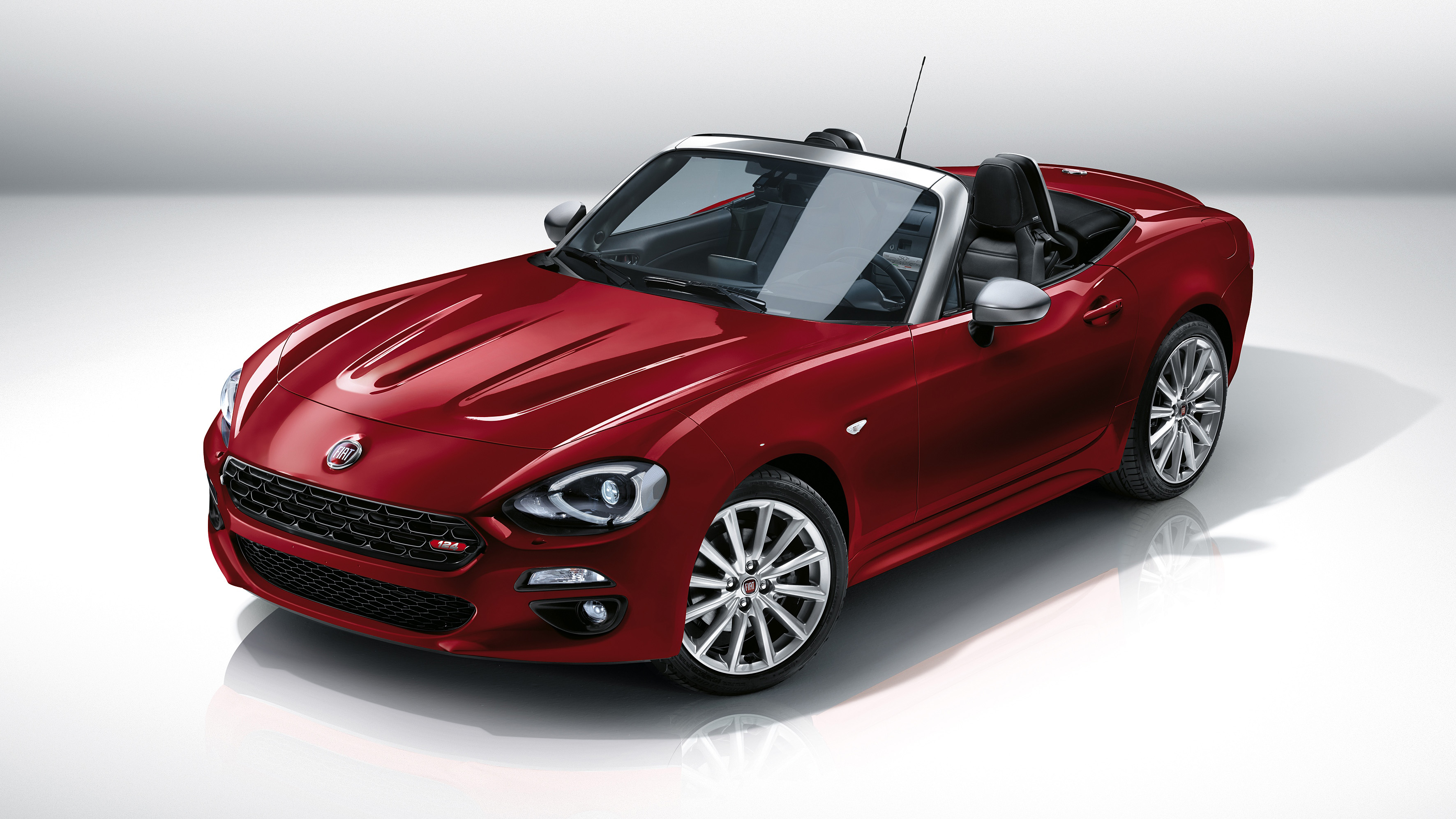 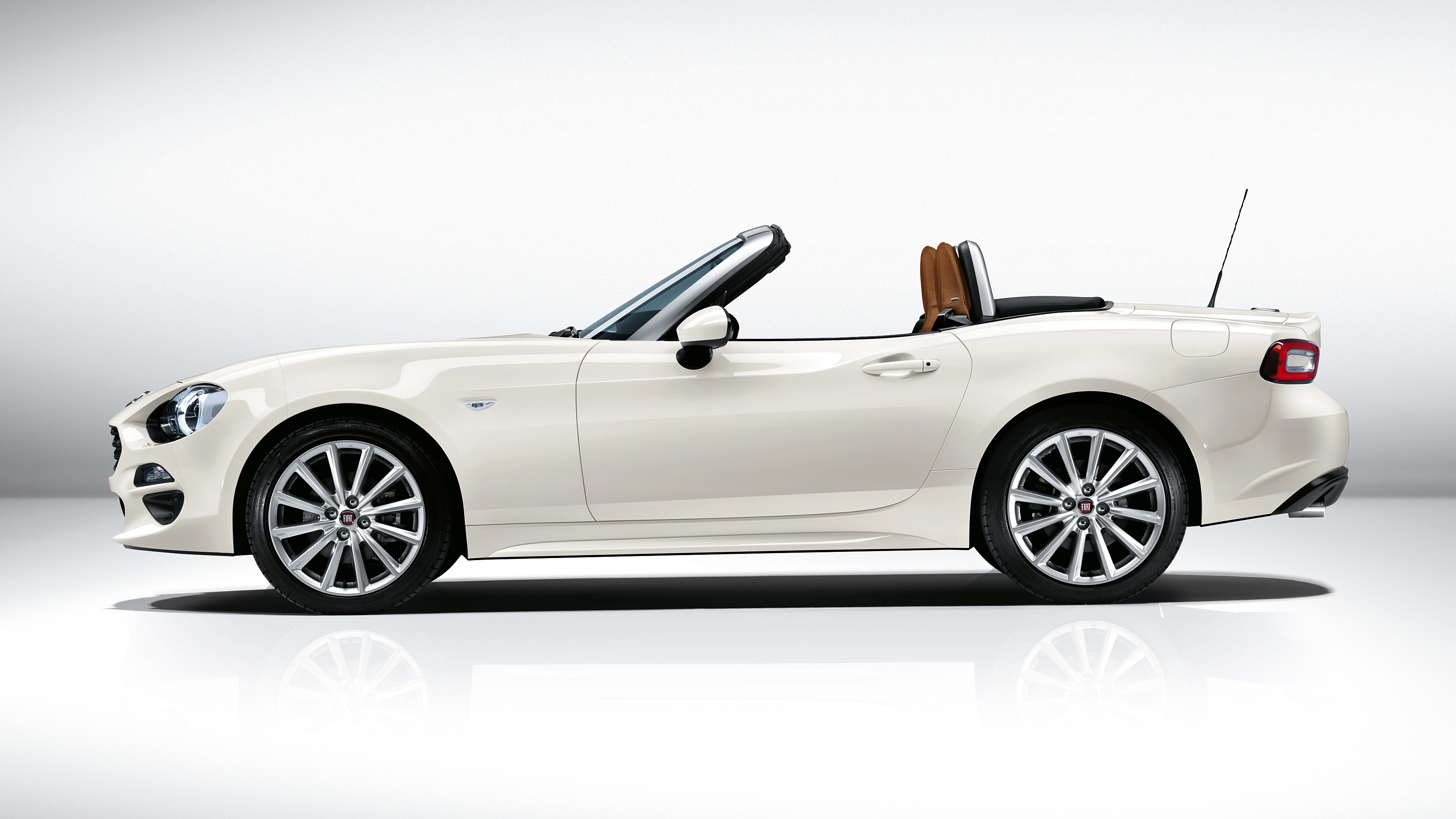 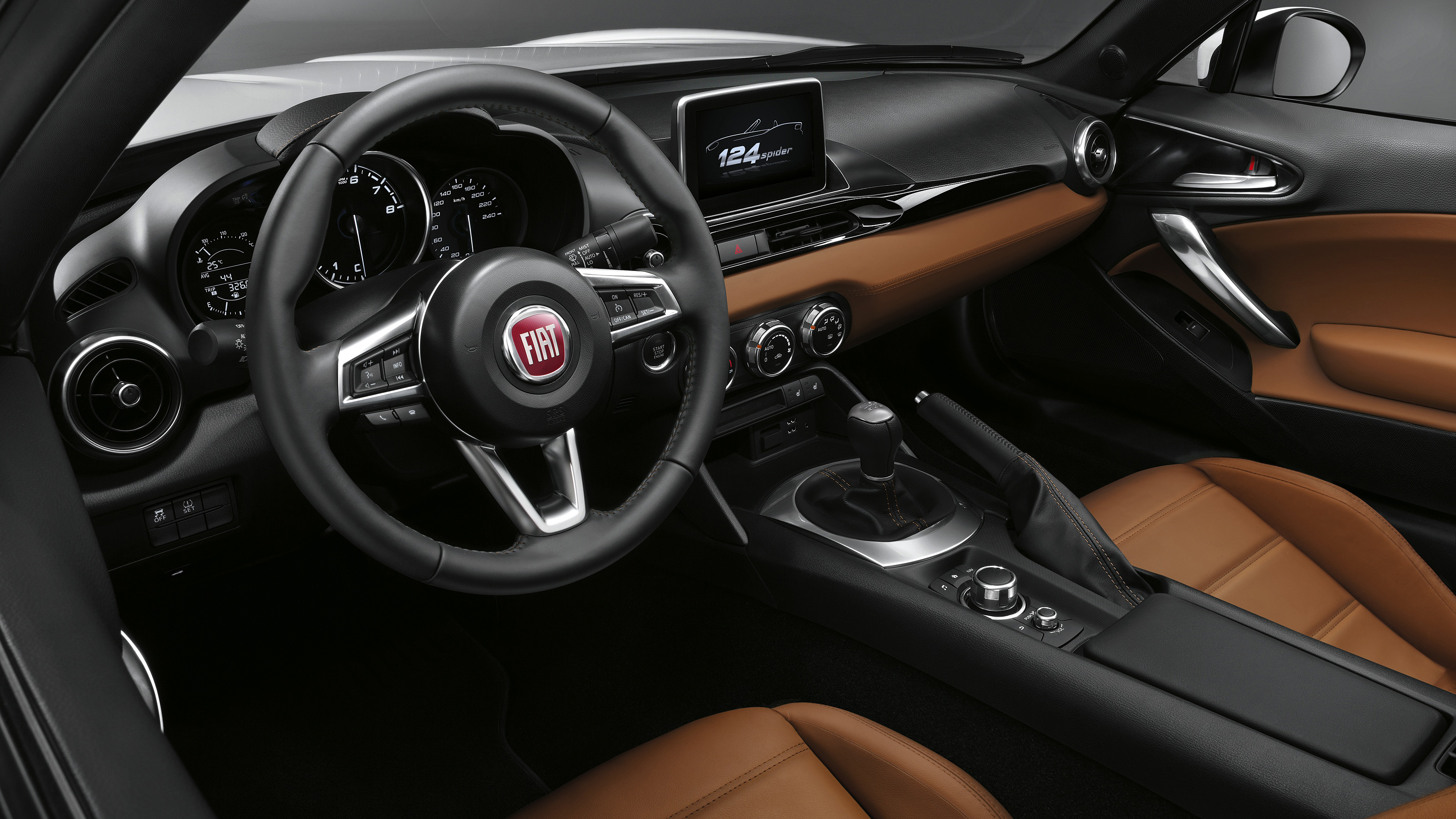 Say ‘ciao’ to the new Fiat 124 Spider, Italy’s take on the Mazda MX-5's two-seat, rear-drive roadster formula. And a very faithful take it is too.

Unveiled today at the Los Angeles Auto Show, Fiat has revived the 124 nameplate for the first time in nearly fifty years. But don’t be fooled, because under those funky new lines lurks much of the hardware from Mazda’s lovely two-seater: indeed, the 124 will be built at Mazda’s Hiroshima facility.

Though it shares its wheelbase with the MX-5, that more voluptuous bodywork renders the Fiat a touch longer, a smidge wider and tiny bit taller. Unlike the naturally aspirated Mazda, the 124 - originally slated to be badged an Alfa - also gets a turbo engine.

But first, those looks. 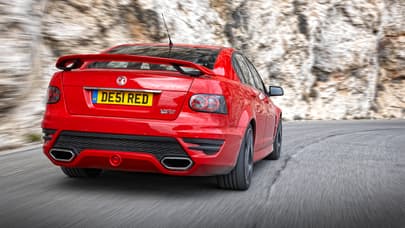 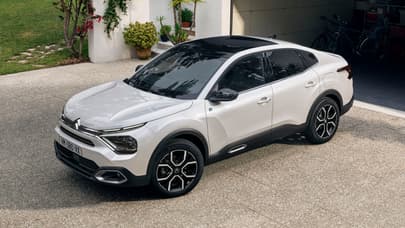 The old 124 Sport Spider of 1966 was the embodiment of classic Sixties Italian design, showcasing Pininfarina in its pomp. This new one isn’t penned by Pininfarina, rather by Fiat’s in-house design studio.

Its styling represents quite the step-change from the simple, minimal Mazda. Where the Mazda is saved from fussy, slashy surfacing, the Fiat, um, isn’t.

The bonnet is longer and more pronounced, with sweeping lines rushing their way down the side of the car to the rear arches. They then flick up and over to sharpen the back end, giving the 124 a more distinctive, GT look.

Unlike the Mazda, the backside doesn’t taper and tuck in on itself. Instead, the 124 boasts a more jutted rear, with two exhausts sprouting from either side, and a cheeky ducktail spoiler for good measure.

At the front, you can’t miss those big, bold eyes. While the Mazda’s headlights are slashed into the front bumper, the 124s’ three-piece LED units look like they’ve been gauged out by an ice cream scoop.

Underneath sits a lippy bumper, while the bonnet surface has two ‘power dome’ humps worked into it. This, plus the boot-mounted rear badge and ‘seagull’ rear haunches, are all (fairly) subtle design nods to the Fiat’s Sixties namesake.

But are we the only ones who see a bit of a baby Viper from some angles? A hint of Ford Thunderbird from the front? And – dare we say it – a cheeky bit of Chrysler Crossfire? To us, the design looks more Italian American than classic Italian. 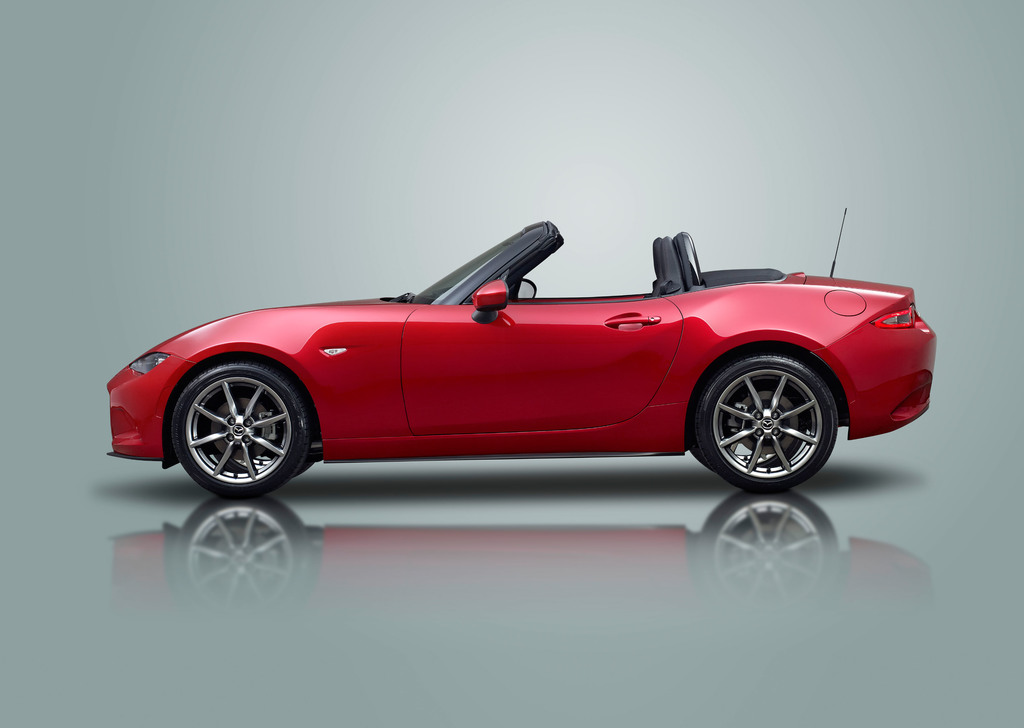 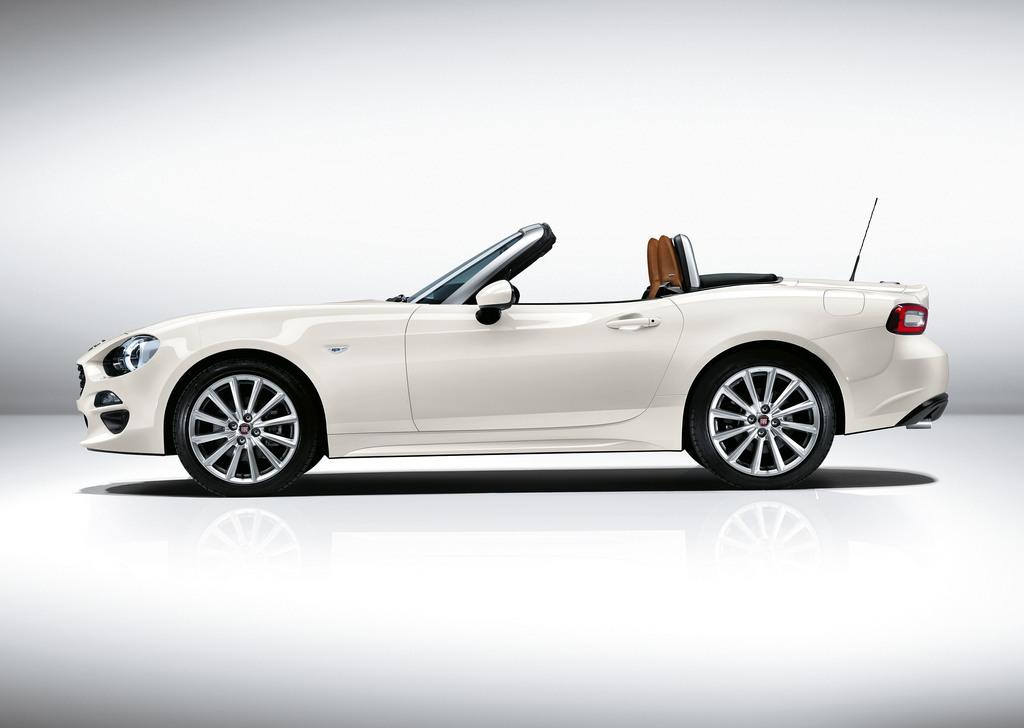 Where the looks may be subjective, we can’t argue with the 124’s layout. It’s the same traditional roadster format we know and love: two seats, engine at the front, driven wheels at the rear. Good Things.

And, yes, it’s turbo. Where the MX-5 bucks the current trend towards forced induction by offering two flavours of high-reving natural aspiration – a 129bhp 1.5-litre and 158bhp 2.0-litre – Fiat has embraced the turbo era by shoving the 1.4-litre MultiAir from the Alfa Giulietta under the 124’s humpy hood.

Kicking out 140bhp, power sits in between the two Mazda options. But torque, at 178lb ft, trumps both.

It’s the first time this engine has been used in a rear-drive car, forcing Fiat to mount it longitudinally, mated to the short-throw six-speed gearbox from the MX-5.

Performance figures haven’t been quoted yet. But as the Spider weighs the same as the lower-powered MX-5 but with more torque, we’d guess it’ll run from a standstill to 62mph in under eight seconds.

Suspension is the same as the MX-5: multi-link at the back and aluminium double wishbones at the front. It’s been subject to an Italian tweak, but we don’t know far Fiat’s chassis makeover goes.

What we love about the current MX-5 is its inclination to pitch and roll in corners. Here’s hoping that squish hasn’t been dialled out of the 124. As anyone who’s driven an Alfa 4C will testify, the FCA group occasionally goes full spine-shattering on its suspension. But given there’s enough space to nestle your head into the 124’s arches, maybe that won’t be a problem here.

The 124’s interior looks pretty much a carbon copy of the Mazda with a large rev counter dominating the dash, while the roof remains an analogue rag-top. To make sure you don’t arrive at your destination looking like Boris Johnson after a spin cycle, the cockpit and windscreen have been shaped to smooth airflow at speed when driving roof-down.

We’ll see the production 124 on British forecourts late next year. Prices are yet to be confirmed, but expect the one-trim option to fall close to MX-5 pricing.

More good news is to come as a juicy pumped-up Abarth version is currently working its way down the pipeline.

But now we’ve got two dinky-yet-affordable rear drive cars to choose from, are you Team Mazda or Team Fiat? Let us know below.

The Alfa version of the MX-5 is dead.

Originally when FCA signed a deal with Mazda in May 2012, it was proposed to be an Alfa. But a year later Alfa was assigned a load of extra investment which was put into the platform that is under the new Giulia and will be under several other cars too.

In March 2014 CEO Sergio Marchionne implied Alfa should build all its cars in Italy: "Some things belong to a place. Alfa belongs to Italy." I remember asking him that day what that meant for the the Mazda car, and he answered, "I remain committed to that architecture, with our powertrain. I'm not sure it will be with Alfa. But it will be with one of our brands."

What is amazing is they have revealed this new Fiat version just 20 months afterward. And it's clear this sheetmetal is designed for Fiat, not just a re-badged Alfa. The shape of the headlights and grille, the bonnet bulges, the crease above the door handles that flicks up into the tail, the way the rear wings fan downwards towards the bootlid – these are all highly reminiscent of the original 124 Spider. I know because I owned one for several years.