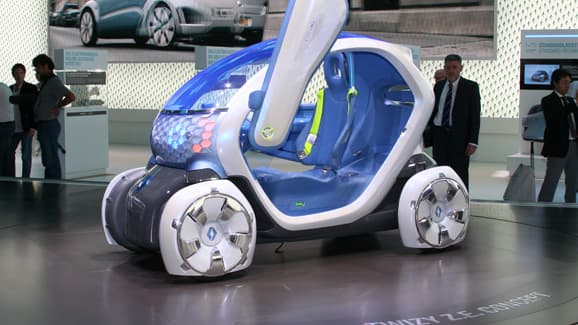 If there's a bigger announcement at Frankfurt this year I'll be surprised. Renault President Carlos Ghosn has just left the stage after another beautifully polished, direct and no-nonsense performance - though I can't help but think the guy would make a brilliant villain in a James Bond film - introducing Renault's new range of four fully electric, zero emissions vehicles.

They are going on sale from 2011 and Ghosn left us in no doubt that the Renault/Nissan alliance is serious about its electric vehicle strategy - the Renault catchphrase is 'drive the change' and it seems it's not just fluff. 'Serious' is the word.

Renault expects that a full 20 percent of its global business will be in Z.E. (zero emissions ie electric) vehicles by 2012. That's a lot, and it makes sense when you look at their strategy: the idea is to leapfrog Toyota by admitting that Renault can't match them for hybrids, and go direct to fully-electric vehicles.

The four Z.E. cars are Twizy, Zoe, Fluence Z.E. and Kangoo Z.E. All will go into production, remember, along with a full support network of electric charging stations and battery swap points. You can charge them overnight from the mains, or in 20 minutes from a dedicated charge point. And the cars' nav systems will take you via a charge station if you need juice.

What's more, Renault promises that not one of these cars will ever be left on the hard shoulder out of energy - that the infrastructure they'll put in place will mean that a Renault service van will be scrambled to give you the power you need automatically, because they'll know you're running low and out of range of a charge point. They've thought of everything.

Twizy (pictured above) is a little city car, near-moped in size, with driver and passenger seated one behind the other. It's quick and nimble, Renault tells us, with 52lb ft of torque, which gives performance similar to a 125cc bike. It'll do about 50mph, which is fast enough for around town, and has a range of 100 miles.

I like the look of the thing and it looks like it'll be great to sit in and drive. Wouldn't want to be rear-ended by an out-of-control artic in it, but that applies to any sort of scooter or small city car anyway. One neat touch is the driver's seat, which hinges on the roof to allow the rear occupant access. Very cool.

Zoe is perhaps the best-looking of the these little electric cars and has real appeal. It's a four-seater supermini and will look very similar to this concept. Not sure the roof-hinged seats will make production, but this basic shape will remain. Zoe has a 95bhp electric engine with 166lb ft of torque. That's plenty, and will power the thing to 80mph - it too has a range of 100 miles.

Fluence Z.E. and Kangoo Z.E. are based on existing Renault production models. The petrol Fluence is the four-door Megane, with petrol versions on sale now. The electric version will be lengthened in the tail to house the batteries. This is a big five-seater car, so needs its 95bhp/167lb ft engine to deliver adequate performance.

The Kangoo Z.E. has the same engine, and again, it's an ideal city work tool, with a range of 100 miles like the Fluence - and 100 miles is enough to cover 80 per cent of journeys made in made in big cities every day, according to Ghosn.

This is all very impressive and even at this early stage, I suspect Renault has stolen the Frankfurt show. I'm looking forward to thrashing the production versions to within an inch of insanity.