How to see into the future | Top Gear
Advertisement
Future Tech

How to see into the future 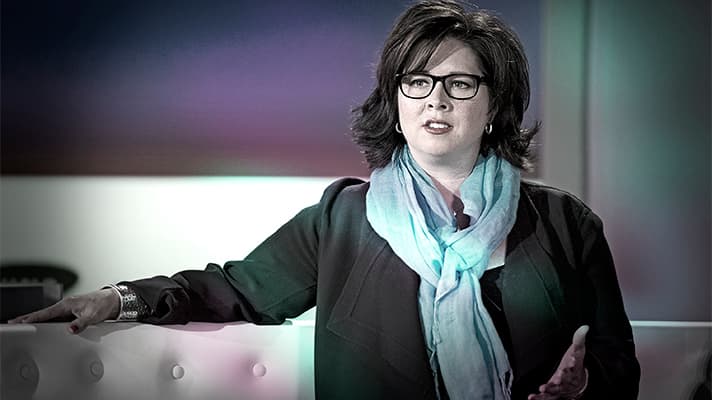 How do car companies know what the world will want in five, 20, even 50 years’ time? If they’re Ford, they ask Sheryl Connelly, the Blue Oval’s head of trends and futuring. It’s Connelly’s job to figure out how the automotive landscape will change before it’s even thought about changing, to predict what the next big shift will be in the world of cars.

A Michigan native who’s been at Ford for nearly 20 years, Connelly was last year named one of the most influential creatives in the world. So can she actually see into the future? And which horse should we back in next year’s Grand National? Top Gear caught up for a chat…

TG: So what does a futurist do?

SC: A futurist does not predict the future. It takes at least three years to bring a vehicle to market, so even if we were to come up with an ingenious idea today, it would still take about 36 months for the rubber to hit the road. So, every day within Ford, we have the task of trying to understand what the world’s going to look like three years out. Henry Ford said, “If I asked people what they wanted, they would have said ‘a faster horse’.” If you ask people what you could do to make their life easier three years from now, most people couldn’t answer that question for three weeks, three days from now.

We’re trying to imagine a future yet to be imagined. I help advance the conversation by teeing up global trends in five different categories – social, technological, economic, environmental and political. While we recognise we can’t predict the future, we believe those forces are the things that will shape the landscape going forward.

TG: How does that work?

SC: What I’m ultimately looking for are patterns, things that keep repeating themselves. One of the trends I’m looking at is demographics – where the population is growing, how that will shape. One of the ones we’re looking at is ageing populations.

There are seven billion people in the world, and during our collective lifetimes that number will easily reach nine, 10, maybe even 11 billion people. But in the advanced economies of Western Europe, and North America, the populations are actually shrinking because they’re having fewer children. That means our population is ageing rapidly.

TG: And what does that mean for cars?

SC: It starts to tell you about where the market’s going to be. When you think about an ageing population, there are physiological factors – reduced response time, impaired vision, limited range of motion. So our designers and engineers spend a crazy amount of time trying to analyse and anticipate those situations. We have a full-body suit engineers put on that mimics the effect of ageing, and makes it difficult for you to lift your legs and knees, turn your neck. They’ll put on goggles that are cloudy and scratched to mimic the effect of glaucoma. So a healthy 30-year-old engineer can step into the suit and feel what it’s like to live in the body of an 80-year-old.

Many of the technologies that have come from the insights of this information are on vehicles today. It’s why we have a reverse sensing system that warns you when there’s something behind your bumper. But we want these features to resonate whether you’re 70 or 17.

TG: Is that possible?

SC: There’s a kitchen device brand called Good Grips. They’re large rubber handles, the thickness of a hammer or mallet. The wife of Sam Farber, the founder of the company, suffered from arthritis. She had to stop her favourite hobby of cooking, so he designed grips that are easier to hold and have better ergonomics. But then they put them on the marketplace, because anyone who picks them up says they feels better than a regular potato peeler.

TG: How do you feel about the future of cars?

TG: From the Seventies, maybe earlier, it was predicted the car was doomed. But it seems to hang around, and hang around in quite a similar form…

SC: Yes, but what the car means is constantly evolving. In America, if you came of age in the Fifties or Sixties and got your first car, it was the quintessential, universal status symbol. When you bought your first car, it was a coming-of-age moment, freedom and independence. Today, I don’t know that those same things hold true.

If you were to ask your average 20-year-old, they might say that their phone, the technology that they have at their fingertips, is a much more relevant status symbol for them than the car. That milestone, that gateway purchase into adulthood, isn’t the first car today, it’s the first cellphone. That doesn’t mean the car’s less relevant, it just means that manufacturers like Ford have to realise the car stands for more than mere transportation.

TG: Can cars be a force for good?

SC: I hope so. To borrow the words of Henry Ford and Bill Ford, they share this idea that mobility is a critical component to the advancement of freedom and innovation. If people cannot move, then you restrict their freedom, and it makes it very difficult to innovate. So we look to a future where we’re helping to advance those things.

TG: What’s the answer to the Big Green Issue? Hydrogen, electric, something different?

SC: I do not believe there’ll be a silver bullet. When I started this job 10 years ago, there were discussions about peak oil. That’s a conversation you don’t hear any more, people seem to have moved on. Ford does not know the future of oil, and because we can’t know, we are investing in advancing a bunch of different platforms, from improving traditional gas, hi-tech diesel, then we go into hybrid, pure electric, all of those things. I’m very pleased that’s our approach, because I don’t think there’s going to be one single solution.

Even if there’s a front-runner that starts to emerge, it’s not likely to be a global solution. If you look at Brazil, they have rich resources in terms of sugar cane, and have been very clear that ethanol will be a big part of their energy strategy. By contrast, China has said that it’s very interested in electric. Different parts of the world have an appetite for different sources. Some of that depends on what’s plentiful in their backyard.

TG: Will people still drive for fun in the future?

SC: That’s a tricky one. A recent study said the average speed travelled worldwide was something like 25mph. Not that fast. This romantic idea of open roads, pedal to the metal, wind in your hair, it’s an elusive one for many people. I think that’s one of the many reasons why the concept of autonomous driving is one that’s so topical today, because people are saying they don’t feel a great sense of joy about driving. I do believe that there will be those who enjoy the Sunday drive – it is still a big part of the American experience, but it’s not something that’ll be universally revered.

TG: Damn. In the Fifties, they said we’d have flying cars and nuclear-powered taxis by now. Why do we struggle to accurately predict the future?

SC: Fundamentally, we’re afraid of things we can’t control or influence, and the uncertainty of it makes it difficult for some people to contemplate it at all. One thing we’ve always done is look at historical data, but if you think about the advent of the internet, cellphone technology, wireless tech, those things are unprecedented. So to look in the rear-view mirror, so to speak, will never help us to understand what’s going to happen in the future. People tend to think about the future in a very linear way, a domino effect, but I like to think of it as the ripple effect of a pond.

TG: Doesn’t that ‘ripple effect’ make it almost impossible to come up with any useful recommendations?

SC: Actually not. I might say, what if we had world peace and prosperity? Then we’d say, what does that mean for industry, and what does that mean for Ford? By contrast, what if we went through the same scenario and said, what if everything’s really bad, geopolitical relations are unprecedentedly poor, the economy has taken a nosedive, there’s social upheaval. What would that do to demand, and how would that affect consumers? Now, you take both of those stories, and in each of them you say: what would Ford do if that happened? If you can come up with a strategy that works in any scenario you can imagine, then you don’t need to know the future.

TG: Do those scenarios match what happens?

SC: In 2004, we wrote a scenario that talked about an economic downturn, what that could do for the industry. The conversation went like this. What if avian flu caused a disruption to global trade and that caused an economic downwards spiral, where does that leave the industry? We said new car sales would dry up, and used car sales would become popular, and our dealer inventories would become rather bloated, and they would stop placing orders at the plant. So we would have to slow down our production, so we wouldn’t be making as many orders with our suppliers, and our suppliers would be struggling for cashflow, and many of them would go out of business. We said if this went on long enough, the US economy would be on a slippery slope towards bankruptcy, and perhaps when this happened the US government would be unwilling or unable to come to their aid. And that was surprisingly spot on.

TG: So you can predict the future?

SC: There were over 100 people at Ford who helped write those scenarios. I’m just the lucky one that gets to talk about them. I am one ingredient into the sausage maker.

TG: How weird do the scenarios get?

SC: We had one scenario where we said, what happens if aliens were to land, and the social infrastructure crumbled to nothing? I’m not saying that anyone thought that would be possible, but the power of planning comes from suspending your world view, letting go of your biases and entertaining the thought that anything is possible. If you do that with enough rigour, invariably you’re going to bump into things that happen…