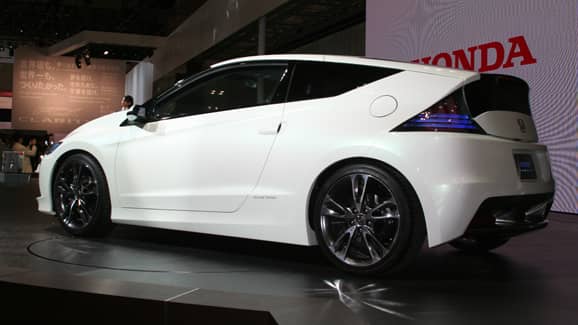 Let's get straight to it: the Mazda RX-500 stole the show. This was a jaw-dropping, mid-engined supercar, powered by a rotary engine and clothed in a body that brought to mind some left-field cult sci-fi movie.

Unfortunately, the RX-500 was first shown in 1970, and reappeared at the Tokyo motor show in 2009 having undergone a full restoration. Yes, the early 1970s... that was back when motor shows made your eyes pop and your brain ache with the sheer improbability of what you were looking at. We didn't realise it at the time, but the future was still... futuristic.

Not this year, though. The truth is, the car business seems to have fallen out of love with the idea of the traditional motor show. This year's Tokyo show - so often the cradle of inspired madness, Tomorrow's World live, in effect - saw the big European players opt out, presumably for cost reasons, and the local outfits hemmed in both by depressing economic imperatives and an uncharacteristic lack of imagination. Apparently, Toyota fielded 14 different concept cars back in 2005's show. This year there were just two.

Displays dedicated to the artwork of Japanese school-children and Tomica model cars (quite nice actually) sprawled over floor-space clearly intended for someone grown-up who failed to turn up. And I thoroughly enjoyed a preview of Gran Turismo 5, whose new collection of cars draws on happier times for inspiration - oddly enough, the 1970s again, in the shape of Countaches, racing cars, and various oddballs.

The new Ferrari 458 Italia is ready to go in GT5, too, further proof of just how seriously previously prickly companies like Ferrari are now taking computer games. The virtual world certainly looked brighter than the real one.

But before I start sounding like Marvin the paranoid android, there were some real highlights too. I love the Honda EV-N, a tiny electric car that brilliantly evokes the late-60s N360 micro car. The designers refused to admit to any nostalgia when I spoke to them, but this is the best update of an old favourite since Fiat's 2004 Trepiuno, which pre-figured the not unsuccessful reboot of the 500.

Officially only a concept, the EV-N is pretty, clever and has a beautifully executed interior. If Honda doesn't give this the green light, it really would need its communal head looked at. The CR-Z (pictured), meanwhile, is a go project and will land in the UK next spring. It's powered by the same 1.5-litre hybrid unit that's already done service in the Civic IMA. It'll also be the first hybrid that doesn't require the driver to pull on his hairshirt. And it has a six-speed gearbox.

The world is clearly changing. The trad motor show now needs to do the same. Tokyo 2009 reflected an industry in the midst of a turbulent transition.