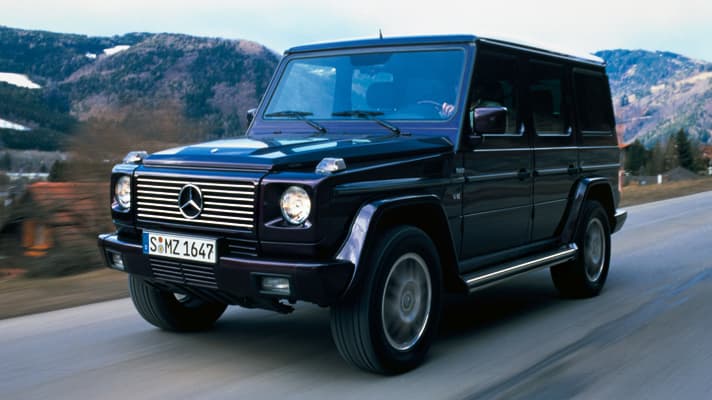 We recently opined that there's no godly reason to buy a G63 AMG. The styling's antiquated, it's utterly terrifying to drive and it's horribly expensive. Truly, horribly expensive - Mercedes has announced today that the G350 Bluetec will start from £82,945, and the G63 AMG from... Wait for it... £123,115. One hundred and twenty three THOUSAND pounds...

But that hasn't stopped swathes of you commenting that you still want one. Badly. So we thought you deserved a bit of a G-Class history lesson (it stopped being the G-Wagen in 1998, by the way)...

Back in the seventies, the Shah of Iran suggested to Mercedes that it might be a nice if it built an SUV (née 4x4). MB promptly hopped into bed with Austrian military vehicle manufacturer, Steyr-Daimler-Puch, and started creating the "Geländewagen" (German for cross-country vehicle) for civilian and military use.

A development program rumbled through most of the seventies, including excursions to German coalfields, the Sahara desert, and the Arctic Circle. And Steyr-Daimler-Puch began hand-building the G in the same Graz factory they're made in today, ready for its 1979 launch.

When it arrived on sale you could choose either a short (2400mm) or long (2850mm) wheelbase. The former came in two-door ragtop or wagon flavour, but the big ‘un was only available as a four-door wagon. You could also get both of the estates as windowless two-door vans, called Kastenwagen.

Underneath, they were sturdy old Hectors. The cubic body sits on top of a ladder chassis, under which SP fitted three fully locking differentials. Engine-wise, the lineup was all Mercedes. You could pick from a selection of three petrols (a 2.0-litre and 2.3-litre four-pot or a 2.8-litre six) and three diesels (a 2.4-litre four-cylinder diesel, or a 2.5-litre and 3.0-litre five-pot). Incidentally, all of the units appeared in one of James' favourites, the Mercedes W123.

The amalgam of military underwear and German oily bits was a successful one, and it soon found favour with the military - in its career, it's seen service with 63 armies, and Mercedes has had to promise NATO that it'll carry on building them till 2025. But there was a problem. When MB started developing the G, the man they thought would buy it had straw in his mouth, not a plum. And even though it offered some concessions to comfort with its civilian versions, utilitarian innards and prosthetic-limb beige was still very much par for the course, despite a comparatively high price tag.

This would all have been fine if the luxo-SUV hadn't just been invented by Range Rover. Obviously, MB wanted in, but instead of developing an all-new model to take on the RR, it threw some its saloon-car spec into the G.

The first major refinements came in 1981 and included an auto' box and air conditioning; a year later it got comfier front seats lifted from Benz's car line-up, auxiliary heating and wider tyres. Having generated some column inches with a Paris-Dakar rally win in ‘83, MB kept piling in the kit; by '87 it was fitting the G with electric windows, a power antenna and luggage covers.

In 1989 it got its first full pimp out - to celebrate the G's tenth anniversary, in came permanent four-wheel drive, wood trim, ABS, a top-spec interior and three electronically-locking differentials.

But in 2004, everything changed. The post '90 Gs were definitely luxurious, but they weren't quick, and its esoteric customer base started noticing. Mercedes' solution was simple - hand it over to in-house tuners, AMG. Subsequently, its squeezed in a 5.4-litre supercharged V8, 5.5-litre twin-turbo V8 and now there's the latest offering - a 6.0-litre twin-turbo V12, which produces 612hp and 737lb ft. In a car with a Cd of 0.53. That's the same as a 1969 Ford Torino convertible.

But clinging on to its antiquated styling, refusing to compromise on its off-road ability and stuffing it with Mercedes finery - and AMG power - has somehow kept the G alive, visually unchanged, for the last 33 years. And despite everything (and Paul Horrell's rather scathing review) we're rather pleased it exists. Because it really, truly, shouldn't, even if it can do this.