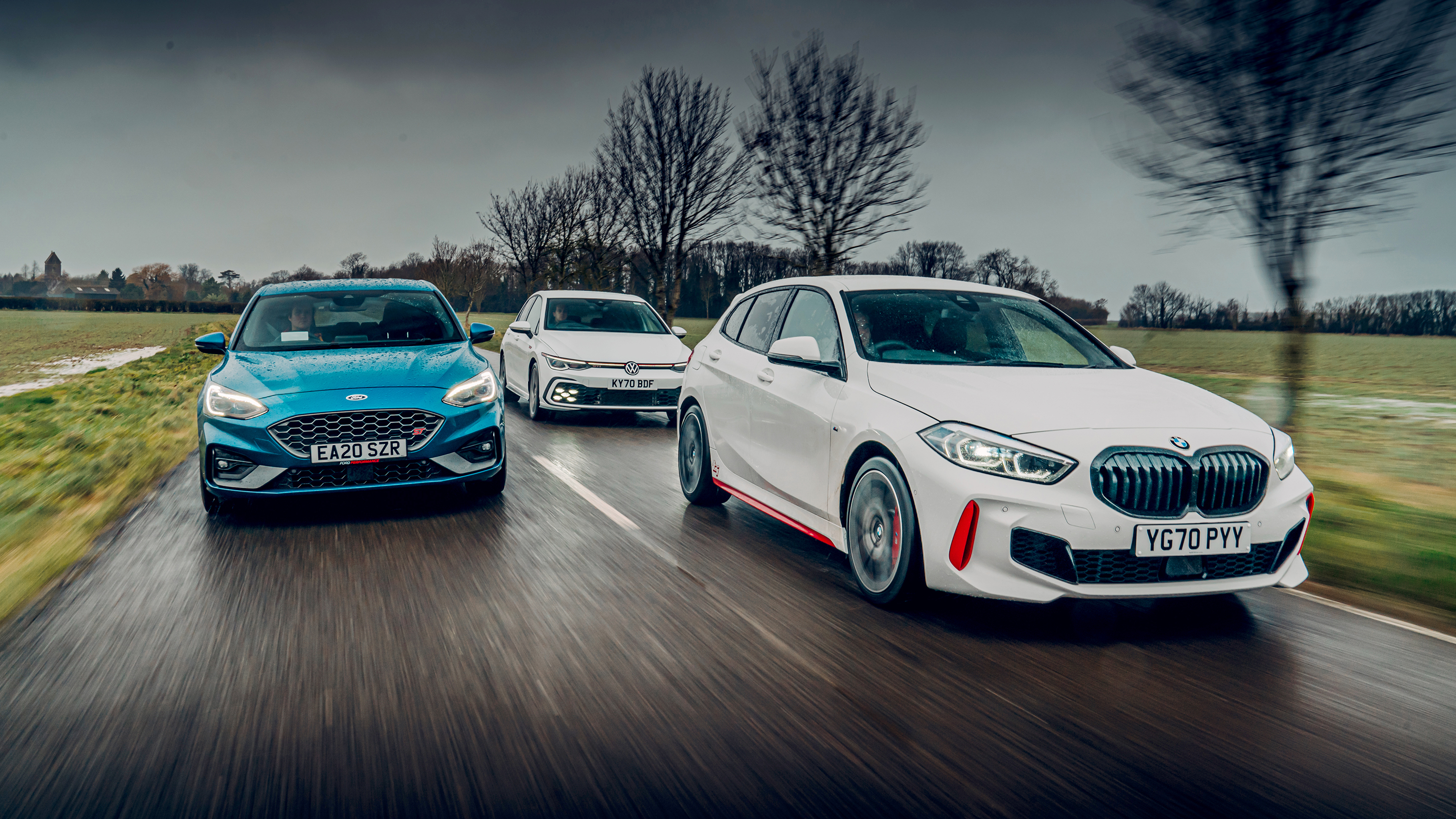 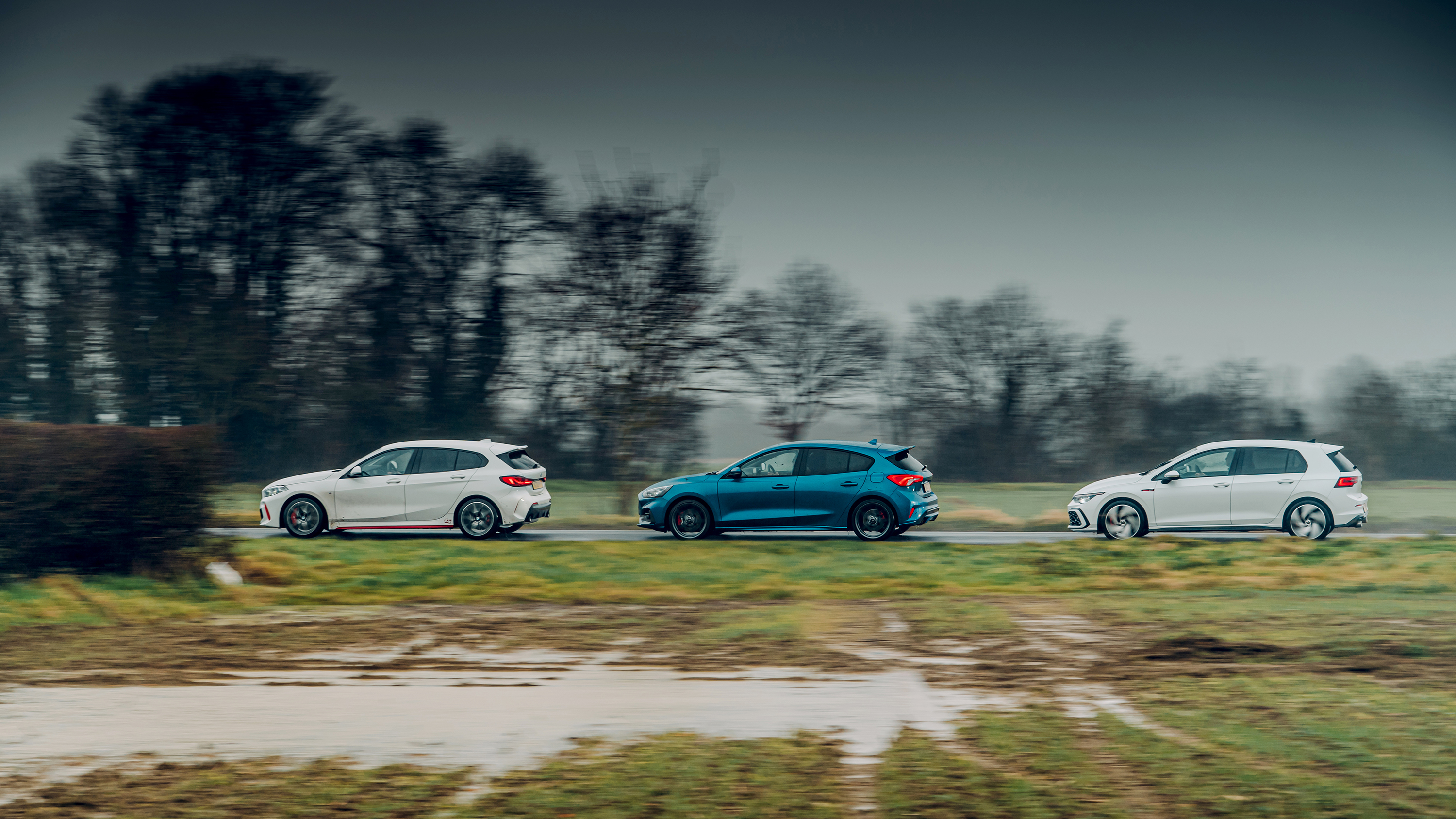 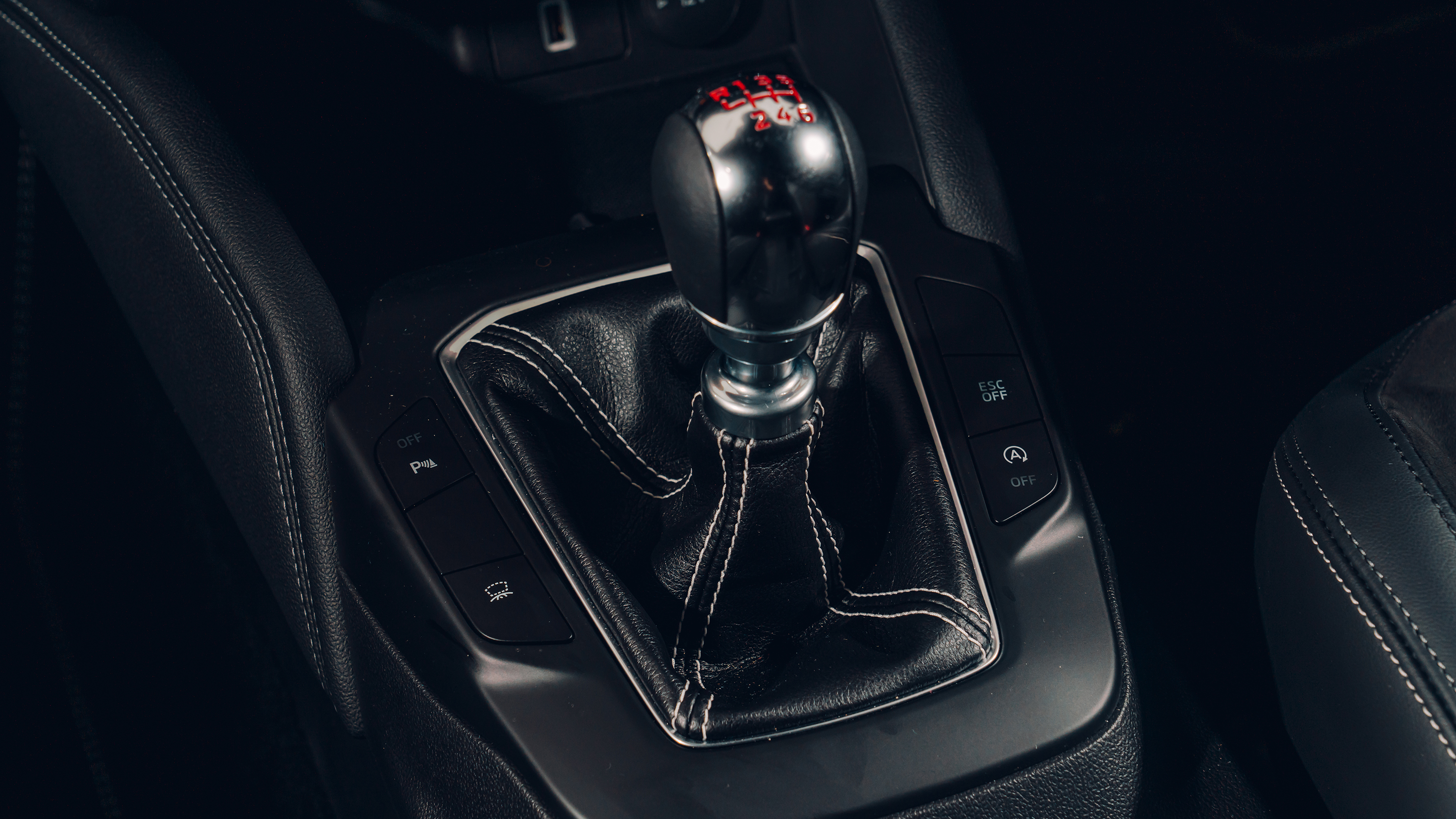 For all BMW’s garish grilles and kamikaze social media ads, for some this will be its biggest crime: a front-wheel-drive performance car. The company’s smaller hatches and crossovers have rocked FWD for a few years now, but this is the first dedicated performance car to come out of Munich without a semblance of a rear driveshaft.

The BMW 128ti is actually something special, though: it’s BMW’s engineers driving the more complex, 4WD M135i hot hatch and finding a way to make it notably more fun. The simpler drivetrain helps shave off 80kg compared with the other quick 1 Series despite a handful of new devices to reduce wheelspin and torque steer up front. It’s German engineers minimising their spreadsheets and having a laugh.

Yet a spreadsheet has clearly been involved somewhere, because never before has a car outside of the Volkswagen empire so closely aligned with a Golf GTI. The 128ti feels like it had one target only: taking down the now eight-generations strong hot hatch OG. There’s never been a better time to do it either, the Mk8 GTI hamstrung for some of us by its tech-laden interior, VW seemingly breaking out of its usual design conservatism with uncharacteristic calamity. The Ford Focus ST feels like the safe, reliable constant in comparison, looking largely like it has for years and with a good old manual gearstick, something VW offers (and most owners shun) but BMW doesn’t.

But when the eight-speed paddleshifter BMW has used is this good, you won’t find us mourning an absent stick-shift. Especially given how well the 2.0-litre 4cyl turbo up front tends to pair with this transmission. It’s an engine familiar not just from BMWs and Minis, but the Morgan Plus Four in the TG Garage. Here it produces similar power – 261bhp and 295lb ft – for slightly tardier acceleration owing to its additional 400kg.

In the real world, though, it’s quicker. It may carry more timber, but that timber takes the form of ‘doors’, ‘airbags’ and ‘clever electronics’, so you trust the 128ti more and work it significantly harder. Especially with the excitingly short ratios of that gearbox. Take manual control and you’ll have a whale of a time, though the car’s brain smartly shifts through its eight speeds when left in Drive, too. At which point you’ll have a very good chance of achieving BMW’s claimed 40mpg. Or perhaps even surpassing it.

It’s more about assertion than aggression, hence it not being labelled an M product. This is a car that makes a very good first impression without clobbering you over the head with it. There’s little in the way of instant magic; instead it feels nice, with very well judged passive damping – no endless fiddling with suspension here – neat, light steering and abundant grip.

There’s a chirrup from the front wheels if you go looking for it but – with the help of its polite front diff – power is broadly put down extremely well. It’s as if BMW has been sending 250-ish horsepower forwards for generations (well, via quick Minis, it has). The ti is a smoothie, so you won’t go barrelling into every roundabout like you’re on a rally stage, but the rear follows the front neatly and you’ve loads of faith in what’s going on beneath. It always behaves with utmost composure. You could be blindfolded into it, badges covered, and know immediately this car had been benchmarked on the Golf GTI.

The interior is suitably up to the task, too, with lovely materials everywhere you look and some welcome colour from all the red detailing. You can delete some of it by choosing leather seats over fabric, but I’d implore you not to. I think BMW is nailing this sort of stuff at the moment, balancing buttons and touchscreens well. The cabin is basically shoehorned in from a Z4 or upper-spec 3 Series, which no doubt satisfies the ‘BMW bits in a cheaper car’ aesthetic that most people flock to the 1 Series for in the first place.

Time to switch into the Golf GTI, a car with familiar proportions, natty tartan fabric and the sense it’s about to deliver its usual understated charm while its two rivals fight and fuss either side of it... then it goes and knocks it out the park by driving deftly and being the same old clean fun it’s always been. It’s the ready salted crisp of the hot hatch world – predictable and unadventurous, but sometimes just hits the spot in a way a bag of pickled onion doesn’t.

As the pictures allude to, our day with these hot hatches was sodden wet, and for simply jumping into and driving with nary a care in the world, the Golf delivers as it has since that magical Mk5 kicked off the GTI’s second coming. It’s got little more power than the Mk7 it replaces, but this 2.0-litre engine is as exciting to use as it’s ever been, and I’m even prepared to concede the Golf is now better with paddles. 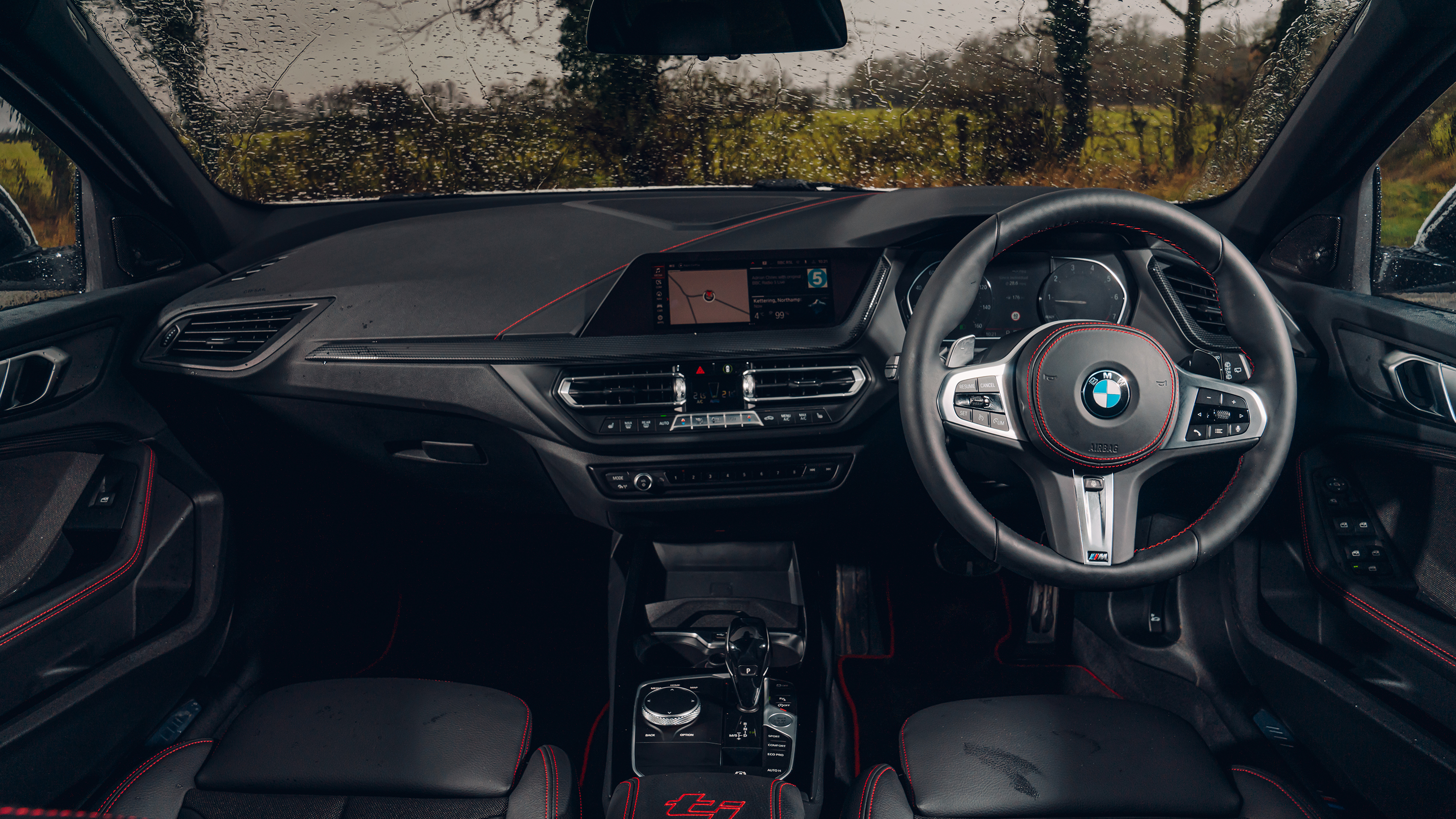 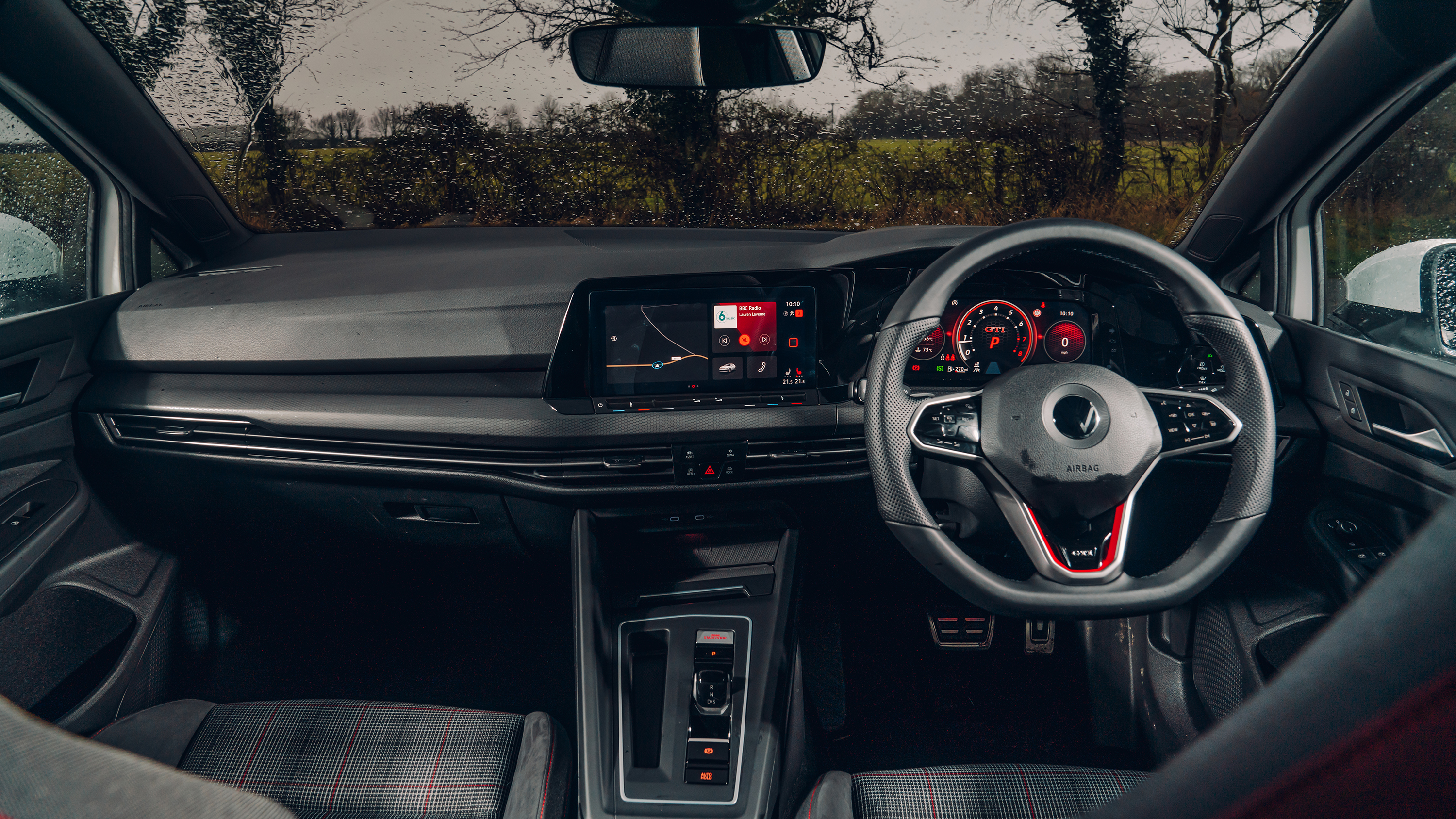 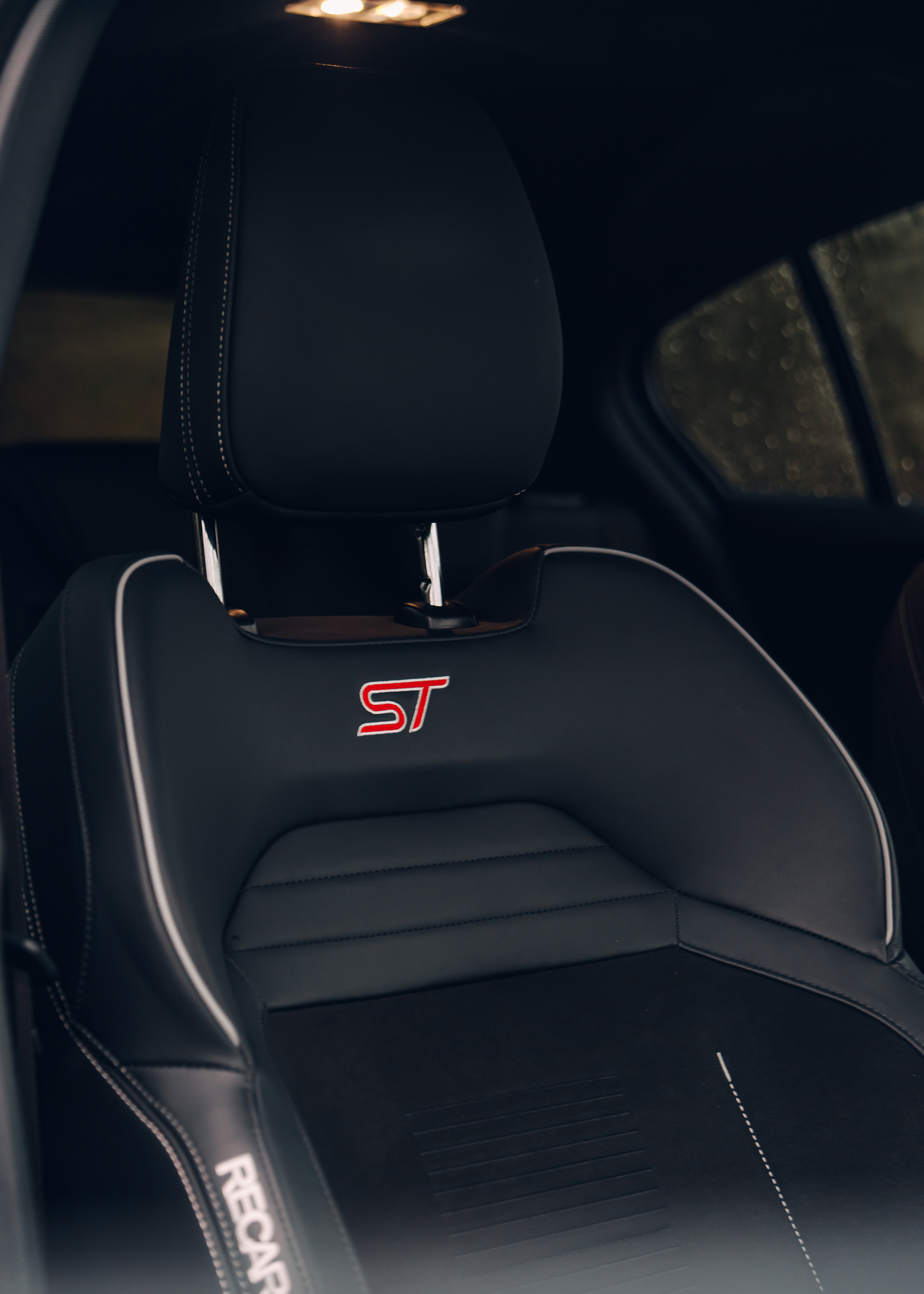 There’s just, as you might be aware, a few hurdles to jump before you can enjoy it all properly. Getting it started isn’t an issue, nor is snicking its little USB stick shaped gear selector into D. It’s hurdles such as how to loosen the stability control into Sport; a simple button press in the other cars here, but a PlayStation cheat code of screen presses in the almost entirely touchscreen Golf. Specify the DCC adaptive suspension fitted here (£785) and you have 15 levels of suspension stiffness to choose from. Fifteen! Choice is great, but you know what ended up being best on crappy British roads? The one slap bang in the middle, giving plenty of credence to BMW’s single set-up.

Even if you’re not doing such dorky things as fiddling with the dampers, you’ll likely feel your arms tensing up as it takes half a dozen button presses to cool down the heated seats when your cheeks start getting toasty. Though you can bark ‘my bum’s too warm’ and the Alexa-lite hiding behind the dashboard will do it for you. I suspect a month or two into your lease you’ll get your head around it all, find how the tech works best for you and adjust the air con temperature with less delay and distraction. Other members of the TG team vehemently disagree.

Then there’s the fast Ford. Where it felt soft edged when we put it up beside the Megane RS and Hyundai i30N on previous occasions, it’s undoubtedly the rambunctious one in this group. Perhaps it’s the placebo effect of its swift shifting manual gearstick, or maybe the relative rawness of its revvy 2.3-litre turbo, but it’s the athlete here, make no mistake. While it’s the easiest ST to live with yet – and the one resplendent in the nicest interior trim – it’ll still drag you into misbehaving, and with greater frequency than its studious German rivals. Though given its burlier torque figure (and slightly smaller suite of electronic assists) it puts its power down nearly as well as the obedient BMW, while still feeling the most muscular of the group. No replacement for displacement, and all that.

The chassis isn’t as erratically playful as Ford’s littler ST hatch, which is about right given this is surely made for the Fiesta buyer suddenly in possession of a kid and/or mortgage. It even rides with genuine decorum, though you can ramp things up through its Sport and Track modes. There’s more than a mite of shared DNA, though, and if we’re judging on raw driving thrills alone, it walks this test.

But if that were our only criteria, we’d have invited a Civic Type R to tear everything else asunder. While the Focus ST won’t be a huge burden on your life, there’s no escaping that – the wonderfully grappling Recaros aside – it is the least cocooning, the thirstiest and comfortably the most expensive to lease of our trio. It’s around £430 a month on a typical three-year deal as I write, compared with the BMW and VW’s £330, which feels like a very tough sell.

So it’s pegged back in third, but so long as you can make the sums work, without disgrace. It’ll be a doddle to live with and a joy to drive. It occupies a curious space between the clean-cut everyday hot hatch and the hardcore tearaway, unable to shine brightest in either company but offering a fine compromise if your heart and head have reached a stalemate.

Then there’s the Golf. At moments I thought it would prove victorious, being so crisp to drive, so elegantly styled when its blinding array of DRLs aren’t lit and feeling just as rational as it ever has. But its ergonomics stir debate where they normally slip into the background unnoticed. Will VW pare back the Mk8’s screen time at its facelift, or will its teething troubles all be yesterday’s chip paper? Either way, it’s the kind of controversy a Golf rarely brings to a group test. And you thought the big plot twists emanated entirely from the BMW’s front axle.

The 128ti doesn’t knock your socks off but impresses more subtly. It sits between the Focus’s fun and Golf’s class while offering a bit of new-badge intrigue, all allied to the cheapest costs of our trio. With just one gearbox and suspension set-up, the BMW could have felt awfully headstrong in this company, but both are brilliantly tuned and negate the need for any alternative. The engineers kept things simple, and so shall I. The sweetly judged 128ti wins this test. 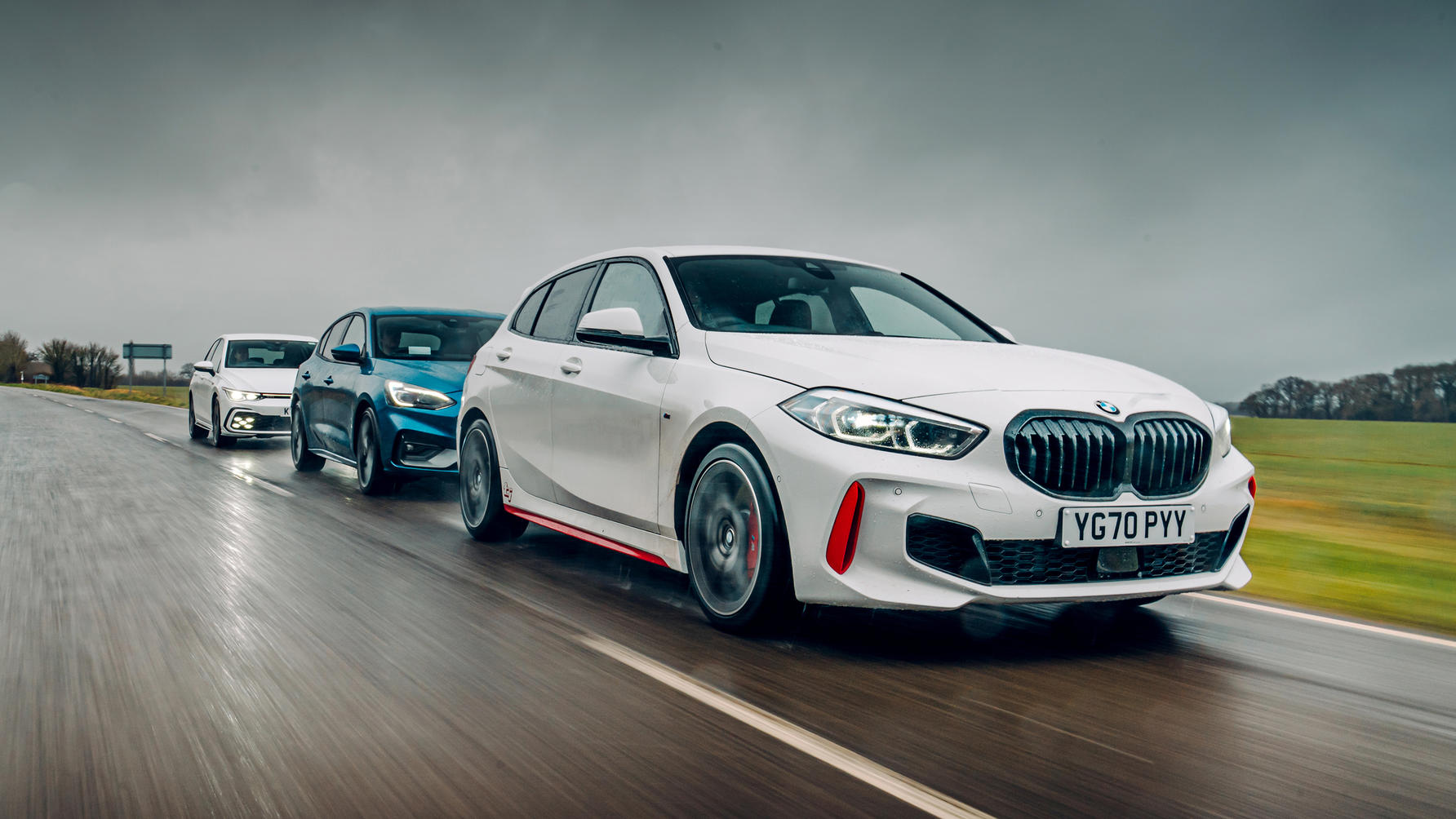