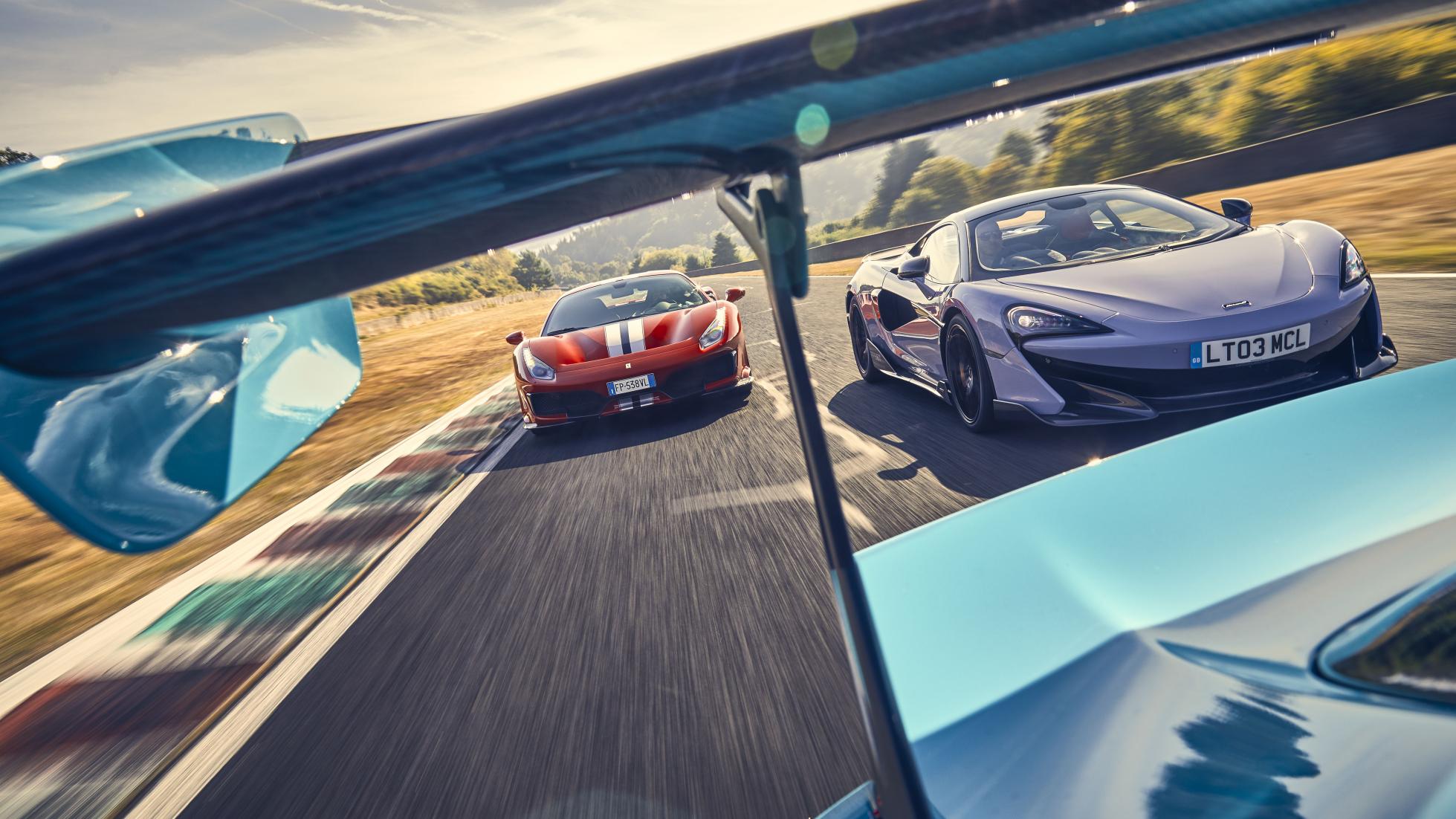 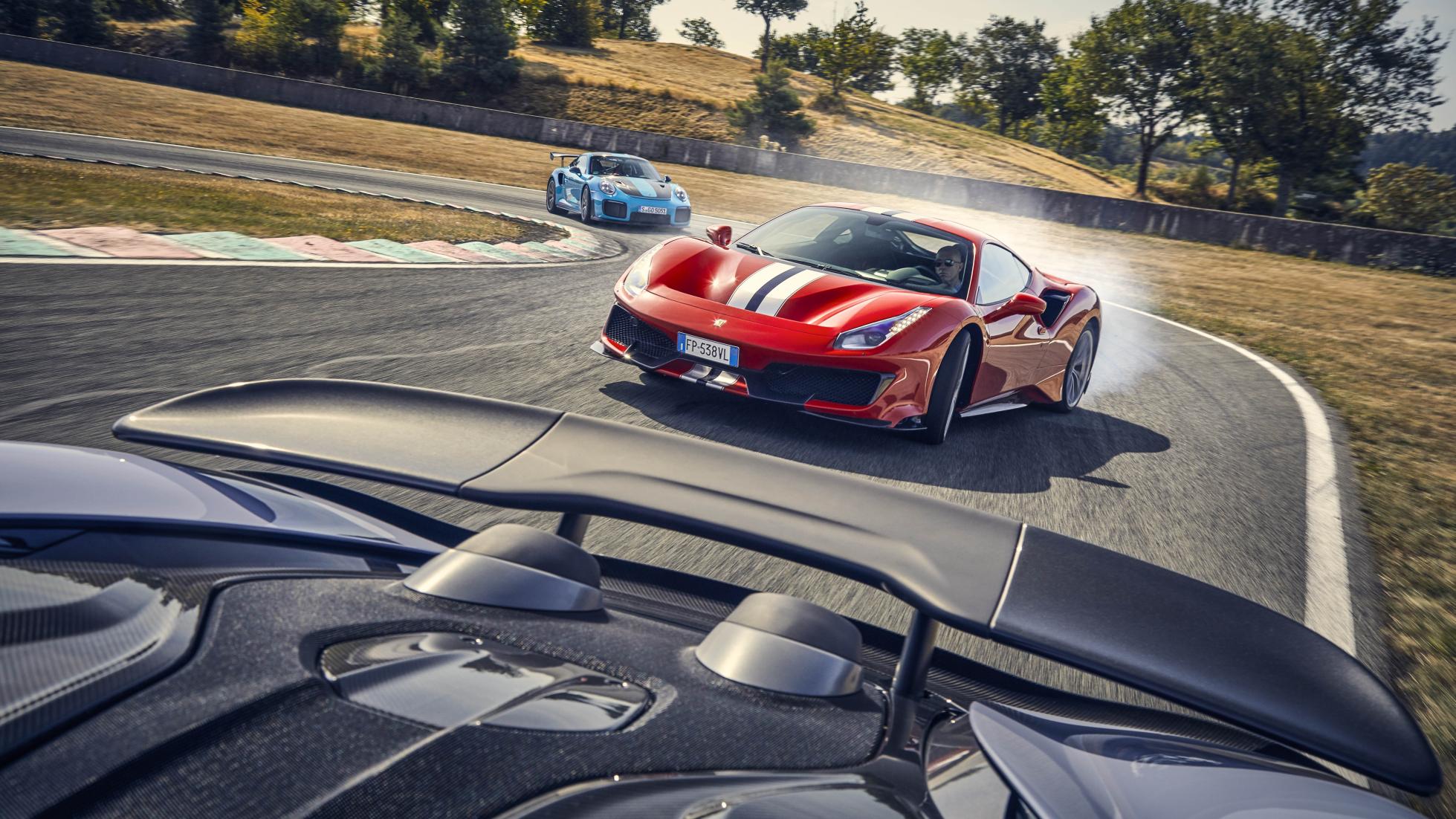 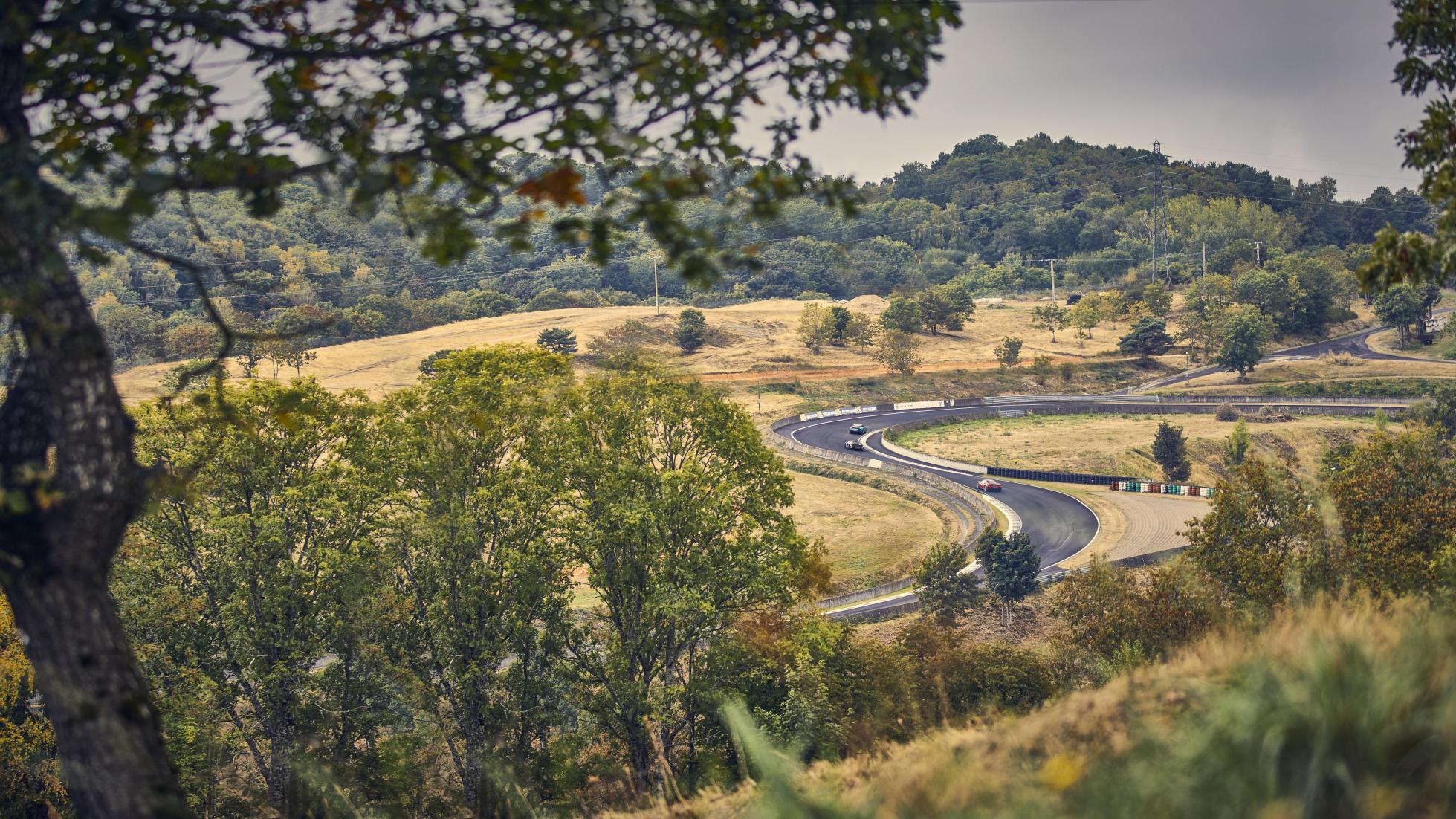 A big one, this. Porsche vs Ferrari vs McLaren. Last time we refereed this inter-marque fight the contenders were hybrids collectively referred to as the Holy Trinity. That was a couple of days I won’t forget. Mainly for praying the rain would stop falling. This time my prayers are focused on the barriers. Whoever thought concrete was the right protective barrier for spindly Seventies F1 cars? Emerson Fittpaldi must have thrashed around here in the full knowledge that the only impact cushioning would come from his sideburns.

Wings, turbos and 700bhp. Yes, car safety has moved on in the last 50 years and the electronics are very clever these days, but to see these three growl down the pitlane isto experience trepidation. They stalk: zero ground clearance, barking exhausts, ticking brakes, frantic fan fizz, the tinkle of grit spat up from hot tyres, movements tight to the point of rigidity. Not racing cars? Well, the title up for grabs here is best track-going supercar, so maybe not far off.

Consider the componentry: the GT2 RS has rose-jointed suspension. Like the Cup racer. Suspension set-up (super-stiff springs, slacker anti-roll bars), that’s borrowed from the Cup too. Ferrari transferred as much of its GTE endurance racer to the Pista as it could, then called up the F1 team’s titanium supplier and ordered conrods and turbo components. Titanium. Carbon. Inconel. Magnesium. It’s all here. Almost everywhere you look.

McLaren has managed to strip 96kg out of the 570S to create its second LT model, 31kg of which has come from all-important unsprung and rotating mass – wheels, tyres, wishbones, uprights and brakes. The exhausts now pop out the top, saving 12.6kg and blowing super-heated air, sometimes blue flames, over a spoiler that has to wear a heat wrap to cope.

McLaren’s first LT, the 675, was chuffing glorious. Surely this can’t be a similar leap forward? 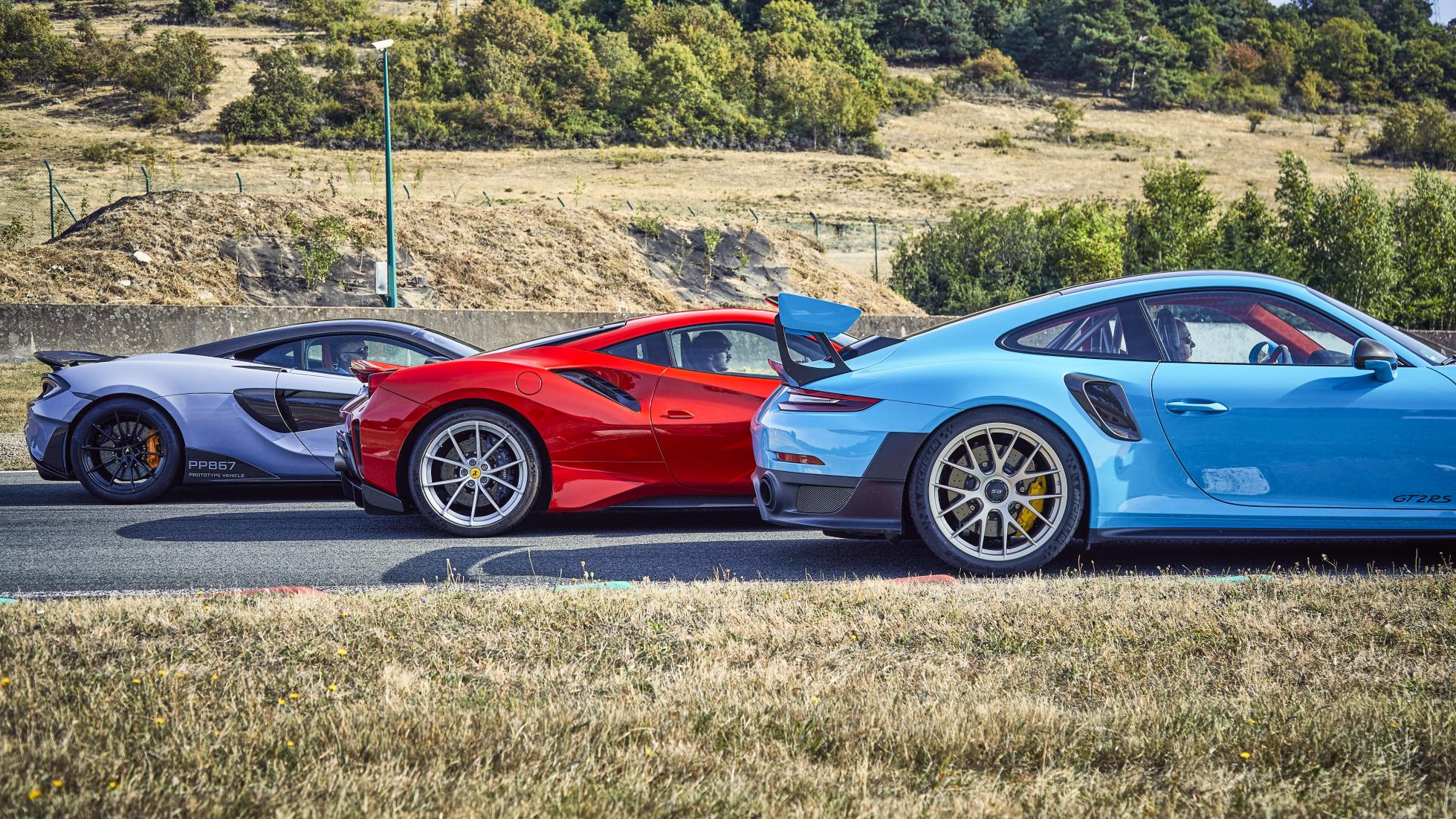 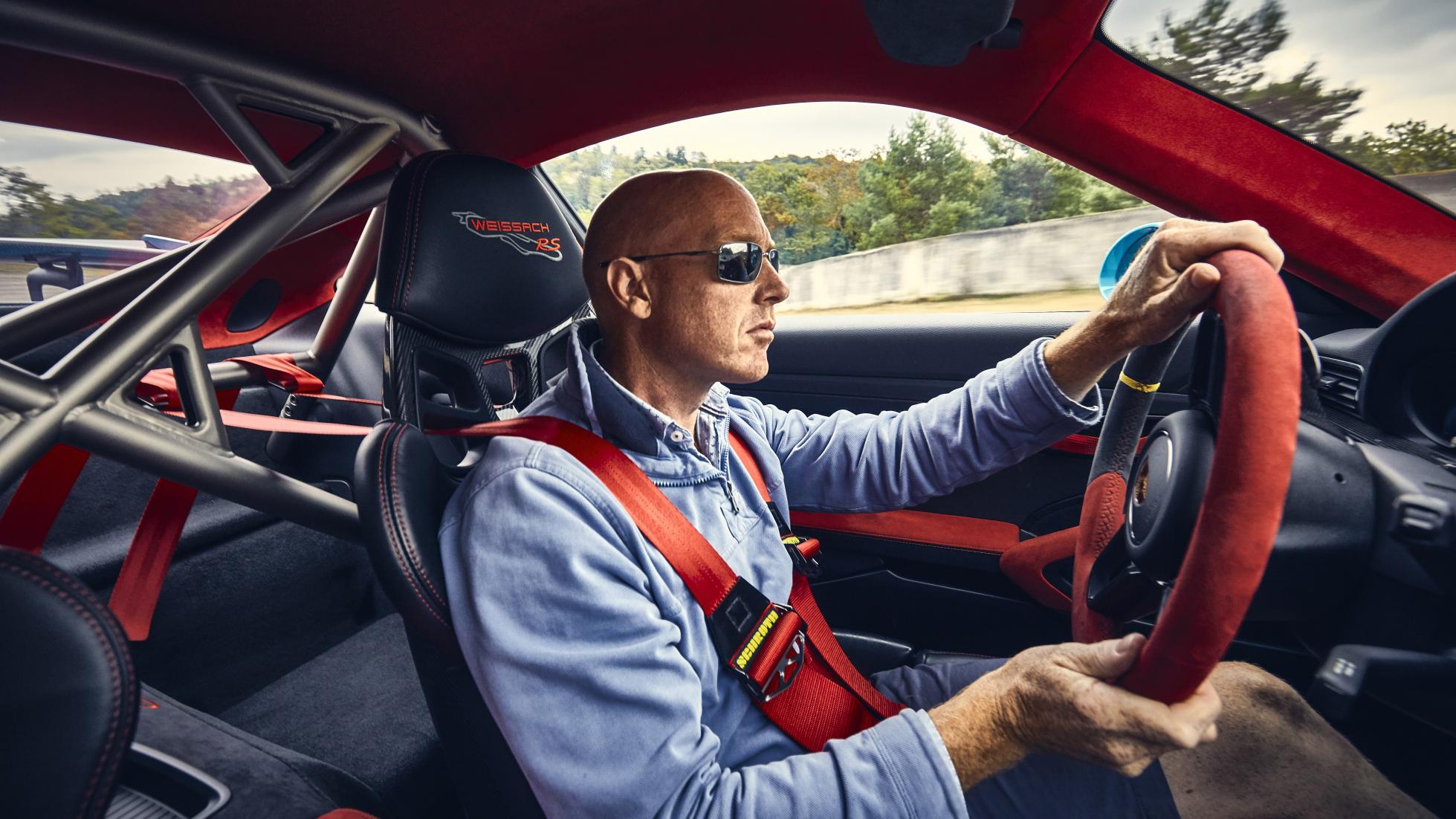 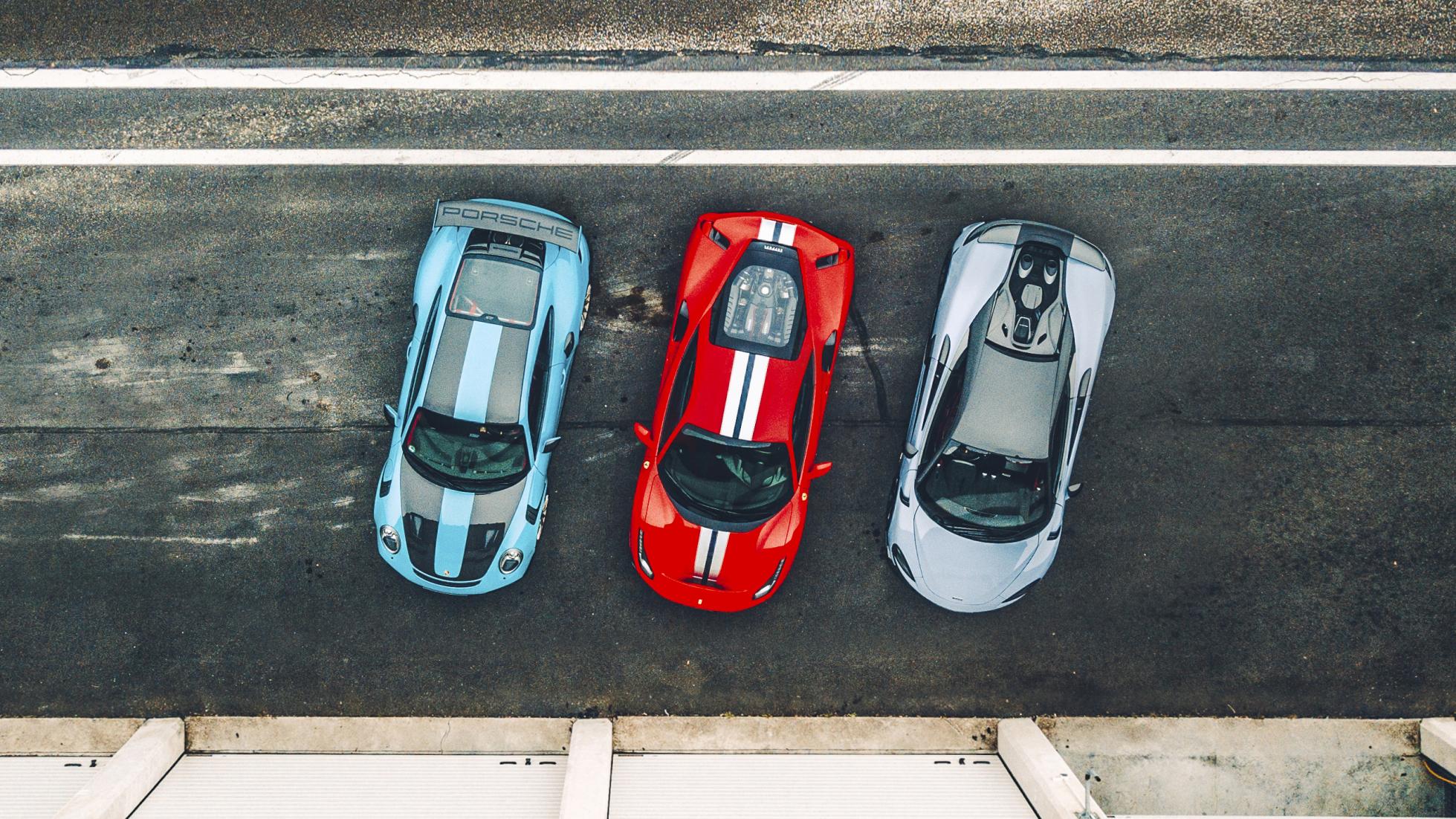 And 90kg has been shorn from the Ferrari, too, and… Look, I could spend pages detailing every alteration, every gramme saved, but all Porsche, Ferrari and McLaren are doing here is following the old adage of adding power and grip and removing weight in a bid to travel faster. Ferrari’s briefing document for the Pista goes so far as to detail how they have reduced cyclic variability in the combustion process. There’s a chart that proves it.

But it’s hard to care about that when these grey, red and blue slivers of exoticism are in front of you right now, sat in the pitlane to touch, coo over and drive. What a line-up. While their hybrid siblings were technological titans, each taking very different approaches, here we find commonalities. The technology needed to send a modern hardcore supercar fast has condensed: Twin turbos all round, a variation of just 103cc in engine capacities, plus twin-clutch gearboxes, rear-wheel drive.

I’m in the GT2 RS first. Literally. Day one, minute one, of track time. God knows why I thought this was a good idea. Well, I didn’t, I was just helplessly drawn to it. There’s something about fast, hardcore Porsches, and about the GT2 RS in particular. Engine aside, it’s very similar to the GT3 RS – indeed we considered having the nat-asp car here instead. But a GT2 RS is a rarer, more fearsome beast. One with a reputation.

Some colleagues have already mentioned manual gearboxes while standing in the vicinity of the GT2 RS. They haven’t driven it yet. They have the flushed face and trembling hands to come, the giddy sense of relief. You get all that in the Ferrari too, the same sense that you’ve tamed something, wielded whip and chair. The experiences are quite different though.

In the Porsche you have to manage both ends. On cold tyres it understeers, and then moves abruptly to oversteer. The tyres don’t stay cold for long, and then you get to appreciate the witchcraft Porsche has applied. When the engine is where it is, how come the weight distribution (40:60) is the same as the mid-engined cars? How the bloody hell have they made this engine manageable? I’m almost more wary of it under braking (where it does pendulum slightly) than under acceleration, where I just give myself over to it.

Actually it’s shove rather than acceleration. Acceleration is a linear word – this is more active, an exponential pressure build. In a way, it’s the bluntest delivery here, but after the softer ramp-up, it’s just addictive... you can’t believe the eye-widening thrust. There’s an old-school vibe about the power delivery, yet this isn’t at odds with the taut dynamics. The integrity is exceptional – it moves brilliantly. Being heavier and taller, it has to fight for body control a bit more, you have to manage the weight, predict the power, be wary of turn-in. But this is all absorbing stuff. The GT2 RS is a very exciting car, maybe not as zingy as a GT3 RS, but even more of a thrill ride.

You want to ride the lightning? Drive the 488 Pista. How, just how has Ferrari made a turbo engine respond like this? Hit so immediately just about anywhere in the rev range? The others only respond properly when you’ve got 5,000rpm showing, but Ferrari shoves the cattle prod in the turbos at half that.

This has shaped the dynamics of the whole car – a motor sharp, fizzy and responsive enough to complement the race-inspired chassis. It’s a hyperactive partnership, so bright and reactive you might almost accuse it of overacting. A little histrionic maybe. This force of personality should be wearing, should be a bit Timmy Mallett, but it isn’t because, when it knuckles down to it, the 488 Pista has both sublime talent and an extraordinary work ethic.

It’s an extrovert that does things differently to the others, more playfully. What it doesn’t do is understeer. Throttle off or on, turn-in with a dab of brakes, introduce a whiff of throttle at any point mid-corner, and all the Pista wants to do is prove how well it can skid. Second gear, third, fourth – doesn’t really matter, those turbos just want to jab the rear end out of line. It could be alarming, were it not so controllable.

The Pista drives with flamboyance and pomp. That engine – so powerful, so responsive – should dominate, yet the chassis is able to dance. OK, the steps are big and sweeping, rather than tight and controlled. Well, compared with the last of our trio, a car that dissects every corner into tiny, tiny pieces.

I barrel out onto the circuit in the 600LT behind Chris Harris in the Pista. This is why we don’t bother doing lap times. Too busy having a good time

I barrel out onto the circuit in the 600LT behind Chris Harris in the Pista. This is why we don’t bother doing lap times. Too busy having a good time. Plus a lap time creates a winner, an impression that car is the best – and that’s no way to judge and enjoy cars. This is. Tearing around a circuit, watching the flair with which the Ferrari approaches every corner, giggling as it transitions the slide onto the downhill straight, while behind the McLaren’s approach is entirely different.

The 600LT is a car that loves the entry phase. It’s the best under brakes and the fastest into a corner, even though it’s wearing the skinniest front tyres. The hunger, the eagerness with which it tries to carry speed in is astonishing. It makes the other two feel... well, blunt. The steering is easily the best here, and the chassis is so sharp it enables you to pick the corner apart, to break the phases down.

It has the weakest gearbox, the one that occasionally refuses a downshift. The engine noise is plain, does the least to get under your skin (the Ferrari wails half-heartedly, the Porsche gusts and chunters, so none is exactly seminal). But the accuracy, the focus, the crystal-clear feedback – the 600LT does that better than any of them. I find it massively absorbing.

In truth you want an amalgam of these cars: the way the McLaren stops and turns in, its steering, control and lightweight feel, its sheer agility. But I want the Porsche’s traction, image, integrity and thrust, the Ferrari’s playfulness, masterful electronic software, charisma and turbo response. See what I’ve done here? As with the hybrid hypercars, I’ve come away knowing I’d need all three to truly satisfy.

Smaller points, then: the McLaren and Ferrari need better seats. Don’t care that they might weigh more, they need to support properly. Ferrari’s interior design has gone off the boil and the Pista steering wheel is too large and doesn’t deliver enough feel. The 600LT’s is perfect to hold; the GT2 RS has predictably immaculate control weights.

This test shows how much personality affects results. If I had to take one car to lap around here for ever (and I would; Charade is in my top five racetracks), it would be the 600LT. I couldn’t be fully satisfied with the others, having experienced that steering and precision. Others wouldn’t. Some found the Ferrari more captivating; a few loved the Porsche most. But they’re wrong. At this stage, Speed Week is a track test, and the McLaren 600LT tackles it best of all.

To read more from TG's Speed Week 2018, click here, and stay tuned for more from the track this week