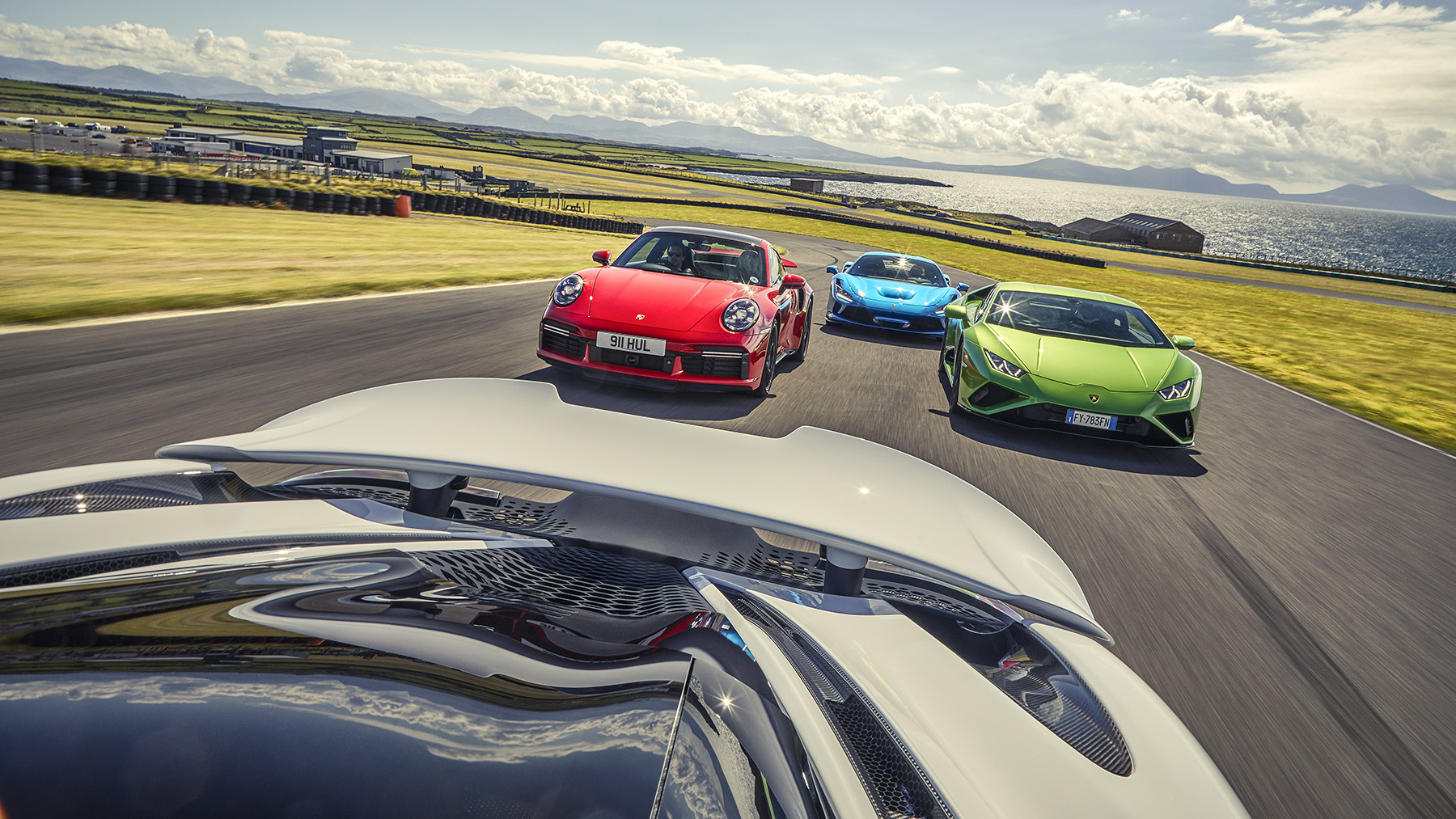 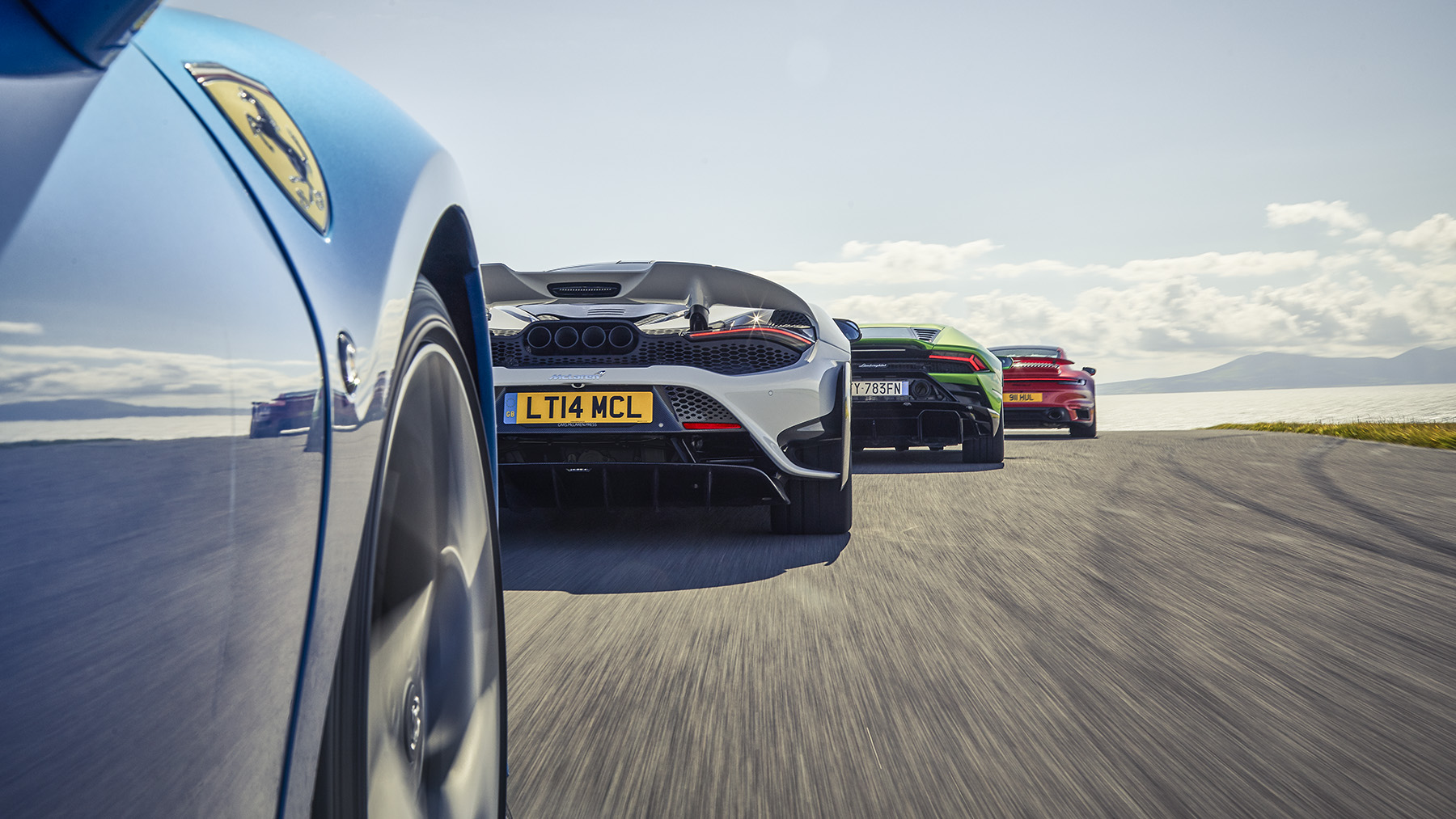 These are the big guns, the animals... better wait for a break in the rain. At some point you have to have a word with yourself. “Enough,” says the inner monologue. “You’ve got away with it so far, there’s nothing to prove, your hands are sweaty and if you were to get out of the car right now, you’d look so ill and dishevelled that someone would immediately point the Covid temperature gun at your forehead.” That point did not come through the long right after Church, where a chance glance before walloping the brakes up the hill to Rocket revealed 140mph showing on the 911 Turbo’s speedo. No, by that stage I’d already given myself The Chat.

Because clinging on to the 911 Turbo on a dry track in bright sunshine was a wisp of pink summer blossom compared to driving the McLaren 765LT on The Day The Tents Blew Away. It was as vindictive as the weather. Sheets of rain swept across the circuit, accompanied by the sound of ripping sheets as the rear tyres once again hissed and span. It was hard to tell what was buffeting the car more: gale force winds or aquaplaning through standing water. Weather and car had matched moods, and neither one was in a mood to compromise.

So we parked the 765LT for the day, parked pretty much everything in fact, and waited for the clouds to part so the McLaren could prove it had a sunny disposition. But you know what you’re looking at here. This is an LT model, the hardcore version of the 720S, its role is to reveal the darker, angrier side. There will be Stradale/Performante/RS versions of the other three along in due course, McLaren is just ahead of the curve and that makes it the odd one out.

We had a bit of a dilemma: treat the 765LT by itself, or put it in with the cooking supercars to see how they reflect on each other. That’s what we chose. And it was fascinating. All four are new to varying degrees. The Lambo is the more magnanimous Huracán Evo RWD, the entry-level car that simplifies and lightens by removing the 4WD gubbins. The Ferrari F8 is a facelifted version of the 488 – no major tech or spec alterations here, but Ferrari has a habit of turning over every stone before declaring itself happy to let a new car out to play. Its twin-turbo engine is taken from the outgoing 488 Pista. Then there’s the brand new 992-generation 911 Turbo. It’s the 911 that some say is the grand tourer of the range. If anyone tells you that about this one, you know that they haven’t driven it. This is a tighter, sharper Turbo, albeit one that also celebrates lag and boost.

The McLaren is different. You know this from the moment you open the door and see the high-sided carbon bathtub that McLaren calls a seat, the sparseness of padding, the hardness of touchpoints. Some 80kg has been hacked out. That’s definitely the wrong term since the lengths gone to include fitting thinner windscreen glass (1.7kg saved) and replacing door pockets with elasticated mesh (800 grammes). There’s also polycarbonate rear glass, a titanium exhaust, carbon body panels, the brakes from the Senna, a rear wing that’s a third bigger and a tail that protrudes 47mm further back. Long Tail indeed.

Even on the sunny day, it’s not the car I choose to drive first. That’s the Ferrari F8. This is because the first thing we need to do for the cameras is skids, and I already know the Ferrari is going to saunter through this. Its combination of lively, rear-biased chassis supported by incredible electronics and a motor that’s conveniently forgotten that it ought to have lag, means that the moment you turn in and prod it, the tail swings wide and you look like a hero. And not just in front of the cameras. The F8 is bright, alert and playful even at modest speeds. It performs the neat trick of convincing you that you’re driving it hard, that you’re on the edge, even when you’re not. And that’s great, that’s what you need if you want to have fun. It still has very quick steering, but it’s somehow calmer in your hands now, and although there’s not much natural steering feedback and the F8 occasionally feels a bit aloof and disconnected from the surface, that’s mostly a facet of its fine ride quality.

It’s a happy car that reveals itself to you quite readily. The Lambo is more intimidating. You sit pressed into the nose, there’s not much space, the steering juts back at you, the windscreen is a long way away, the seats hard and the engine... we forget, these days, how much the motor affects our experience of a car, even before you start driving. The Ferrari, Porsche and even the gruffer McLaren, all idle calmly. The Lambo’s V10 yelps into life, idles noisily and is generally more strident and demanding. You sit in the pitlane, not eager to experience 8,500rpm, but frightened it’s going to bite you before the first corner.

That impression doesn’t change much in the first couple of laps. The Lambo does things more suddenly and with less control than the Ferrari. The front end is sharp and pivots underneath you, the rear end doesn’t have the same mechanical and electronic control of its differential. Rather than driving the circuit, you manage each corner, get it fully straight and then light the V10.

But here’s the thing. If you push through that to the point the rear end loses traction, really get the V10 howling and hectic, you discover a new realm. Because pushed hard the Lambo becomes more communicative, friendlier. It likes to slide and is way better at it than you’d ever imagine. No, it’s not as sophisticated as the Ferrari, not as delicately adjustable through corners, not as sensitive under braking and does slam the gearchanges through rather abruptly when fully ramped up in Corsa mode, but there is talent in there. It just takes some unearthing.

I thought I knew what to expect from the Porsche. Two words sum it up: ruthless speed. And like the Lambo, for the first couple of laps that’s exactly what you do experience. Of course it links the lap together much better – no fear about loss of traction on corner exit or turning in on the brakes (which is amazing when you think about where the engine is). You have confidence from the word go, there’s real turn-in bite now the front track width has been increased 45mm, traction is addictive through slow corners and the car is locked to its line. Superb brakes (the best to use here. Yes, including the McLaren’s), compact and wieldy, easy to see out of, unintimidating.

The worry is it will soon become one-dimensional, that there’s nothing to discover except ruthless speed. Couldn’t be more wrong. Meet the Turbo that drives like a GT3. It’s hilarious. The harder you push, the more the Turbo reveals itself. Overcook it into a corner, the tail comes round and suddenly you’d swear blind the damn thing was a rear-drive drift machine. Through high speed stuff it’s as if it has found 200kg of downforce from somewhere and dropped like a low rider, it’s so planted and tight.

It doesn’t have an engine that responds as promptly as the Italian pair at low revs, but kept on the boil lag never gets a look in and the 3.7-litre flat six sounds gruff and tough. It’s the car we all took for granted, the least exciting of this group on paper, and yet the one we all found endlessly engaging. Nothing else here flowed round the circuit better.

And yes, that included the McLaren 765LT. It was the one car that made Anglesey feel small and tight, the one that never really got into its mighty stride. It tried to tear Anglesey to pieces, but it ended up feeling caged and responded by getting snappy. Tight corners were its weakness. It’s not that it understeered specifically, it’s more that it didn’t transfer from braking to accelerating smoothly enough. The brakes bit hard, the car stopped well, but it was a bit scrappy, you had to bully it into the corner, and then, despite claims to have reduced turbo lag, if the revs dropped below 4,500rpm, response suffered. And then it woke up and hit home. Hard. If the track was anything other than bone dry and you were in any gear under fifth, sudden, violent wheelspin was a possibility.

It’s a car you have to keep on top of, have to be confident with, but it doesn’t make that easy. Toughen up the adaptive suspension and it’s stiff enough to patter on an admirably smooth circuit, but the signals coming back are occasionally confused. I struggled to get to grips with it, adjusting settings looking for a sweet spot that wasn’t quite there.

McLaren claims the LT cars are all about driver engagement. and I’ll never forget how the 600LT attacked corner entry at Clermont-Ferrand at PCOTY two years ago, or the all-round magnificence of the 675LT. There was a car that was nothing but driver engagement. The 765LT doesn’t flatter the driver in the same way. It’s a spikier, more complex and aggressive car, but even after four days of driving on road and track in a wide range of different conditions, I still wasn’t completely comfortable. I think there’s an argument that it’s simply too much: too much power, too much speed, too much to keep up with.

We talked a lot about whether it felt like this because we had it in league with ‘regular’ supercars. So let’s talk about how exploitable a car is. All great road cars should be exploitable and engaging on all roads. Both the 911 and F8 are. But our conclusion was that the 765LT would need a full grand prix track to feel like that, and that the speeds (and your commitment levels) would be dizzying. A good part of me loved the challenge of the 765LT, the satisfaction of getting a corner right, it’s aggression and attacking nature. But then I’d find myself thinking of the standard 720S, and reckoning I’d be having a better time in that.

It’s hard to place the 765LT in this group, but based on our sky-high expectations from earlier LTs, it’s fallen short. When we talk things over around the campfire at the end of the day, I tell everyone I’m giving it third place. No-one dissents. Ahead of the Lambo, but behind two cars I’ll happily be putting forward for Chris’s final reckoning, the Ferrari F8 Tributo and Porsche 911 Turbo S, neither of which ever triggered my inner monologue.