From the ashes of Gumpert comes a new €2.3m supercar that’ll drive on the ceiling 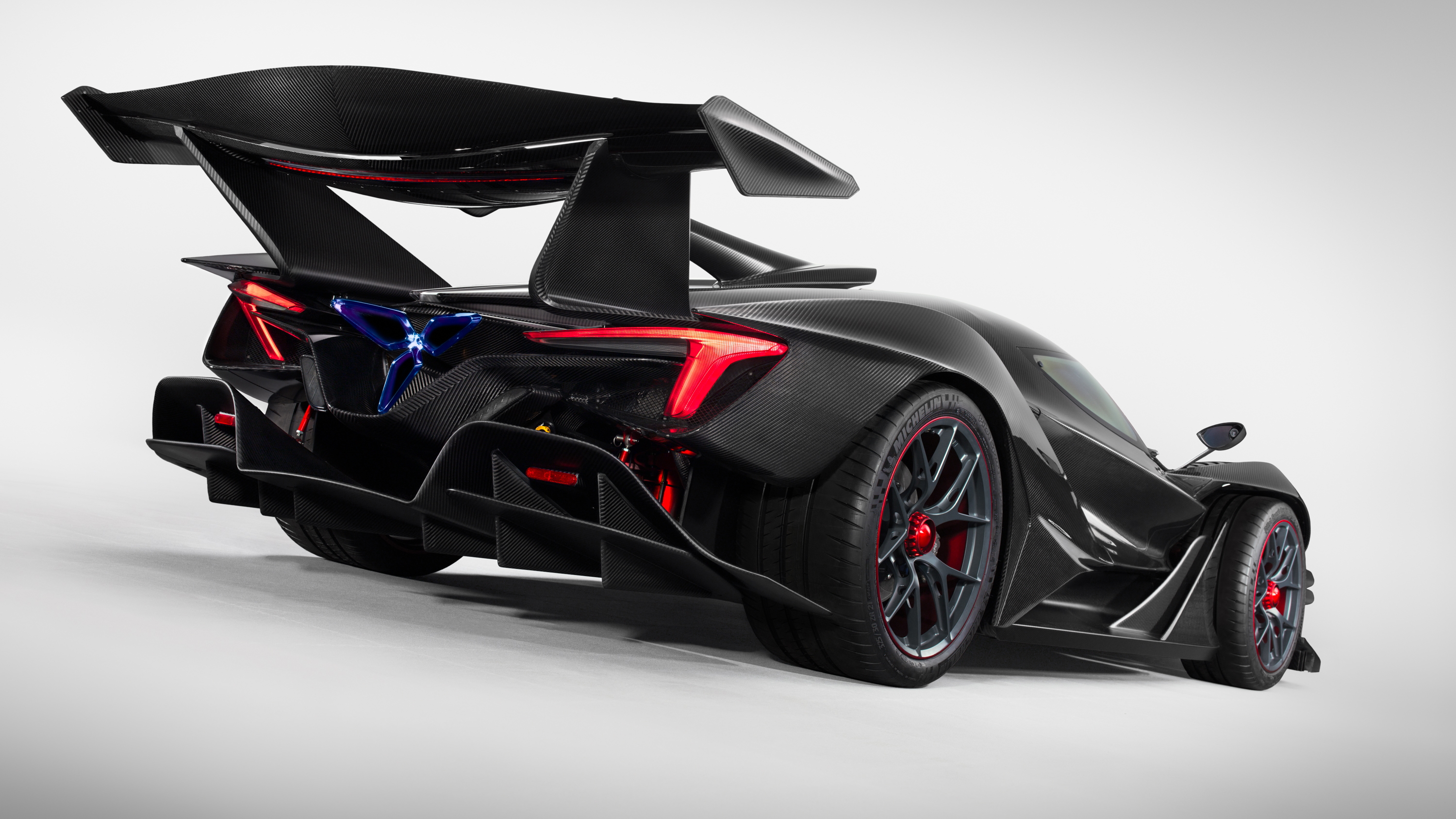 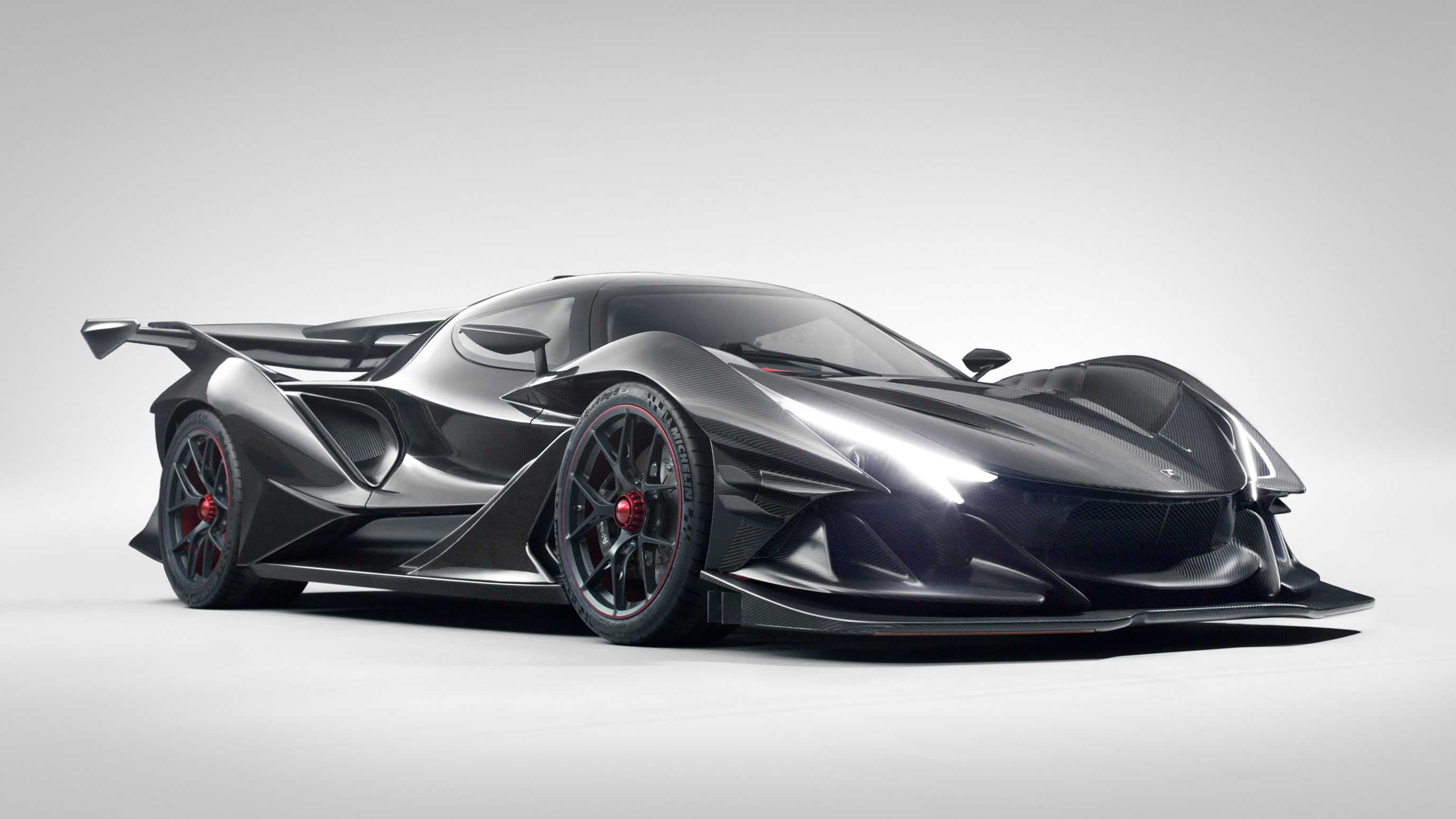 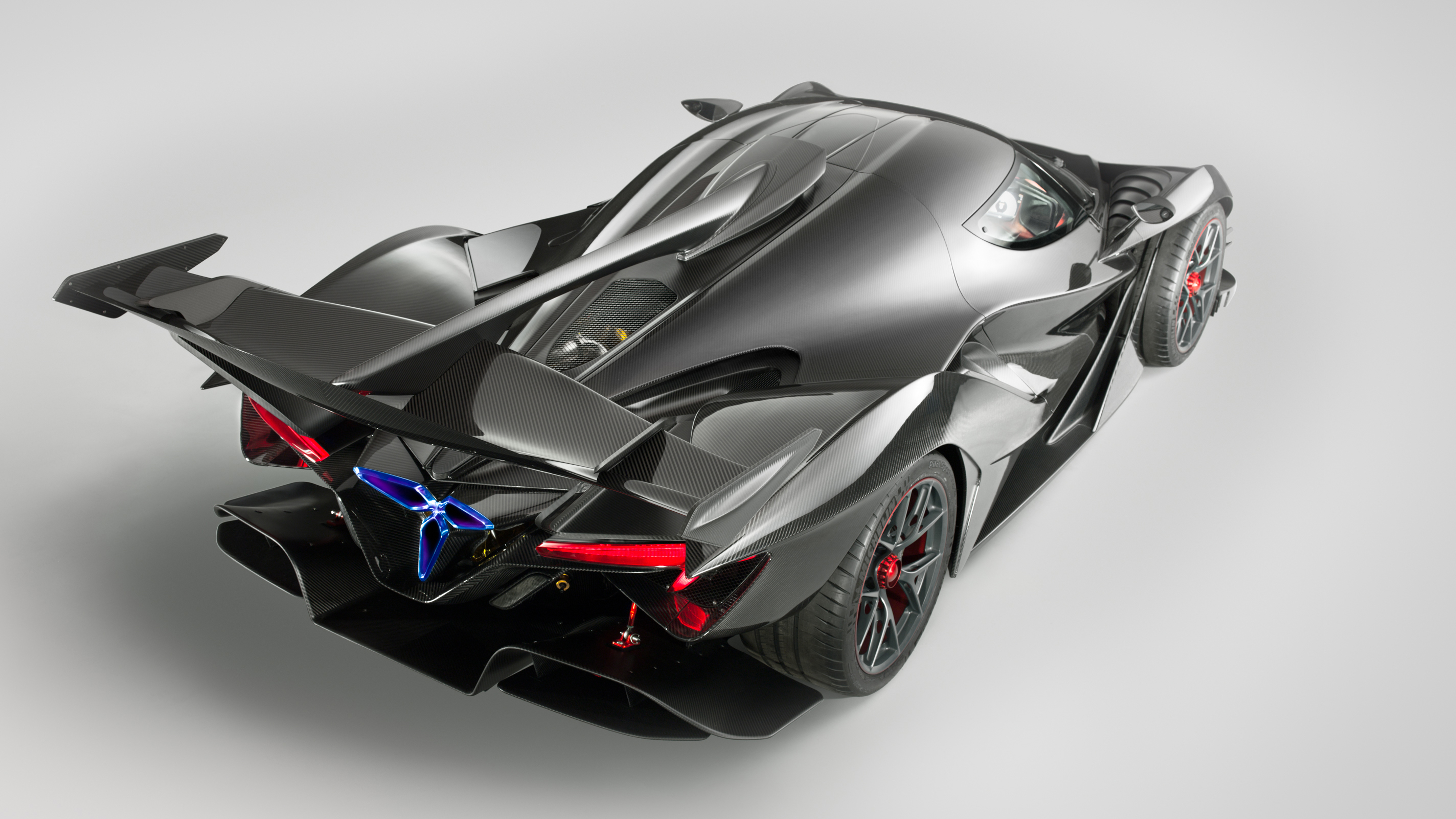 Remember the Gumpert Apollo? Very fast, very ugly. Very dead. Remember its concept successor from 2016, the Apollo Arrow? That’s a goner too. This is the new, absolutely furious face of Apollo. It’s named Apollo Intensa Emozione, because that sounds better in Italian than ‘Extremely Moody’ does in English. TG’s spent a day poking around the new creation – we’ll just call it the IE for short.

Limited to ten bespoke units priced at a tasty €2.3m a pop, the Apollo IE is a track-only, road-illegal supercar that’s here to launch Apollo into the boutique exotica scene. No longer affiliated with Roland Gumpert, the company’s been bought out and reimagined by Hong Kong businessman Norman Choi, and he’s created what he describes as a nostalgic GT1 racecar for the 21st century. You’re not looking at computer renderings here, by the way. Both the giant top-mounted wing and the car stuck to the other end do indeed exist, and make a quite terrifying noise.

And thanks to a monumental 1,350kg of claimed net downforce at 186mph, the Apollo IE can uses the same party trick as the old, defunct Gumpert. Yes, it could drive on the ceiling, theoretically. Funny how no-one ever steps up to test that, eh?

Mr Choi tells TopGear.com he thinks the rush for huge, turbocharged power outputs and virtue-signalling hybrid efficiency has diluted the appeal of modern supercars. He says: “I used to have a supercar collection, but I got rid of it all, because nothing excites me. They all drive like Hondas”. Oof. Punchy. That explains why the IE has a relatively old-school powerplant…

Motive force comes from a mid-mounted 6.3-litre V12, driving the rear wheels via a six-speed Hewland pneumatic racing dogring gearbox. The V12 is naturally aspirated, and gets no electro-hybrid boost, unlike a certain Italian hypercar we could name (which also has a 6.3-litre V12 developing exactly 769bhp).

Apollo’s guys clam up pretty quickly when you start to ask where the engine has come from, especially if you use the F-word (no, not that F-word). We’re told the engine is related to Ferrari’s (whoops) F150 project, but has been thoroughly reworked by Italian engineering partner Autotecnica Motori. There is no prancing horse branding to be found. So don’t dare go thinking it’s a Ferrari engine. Got it? 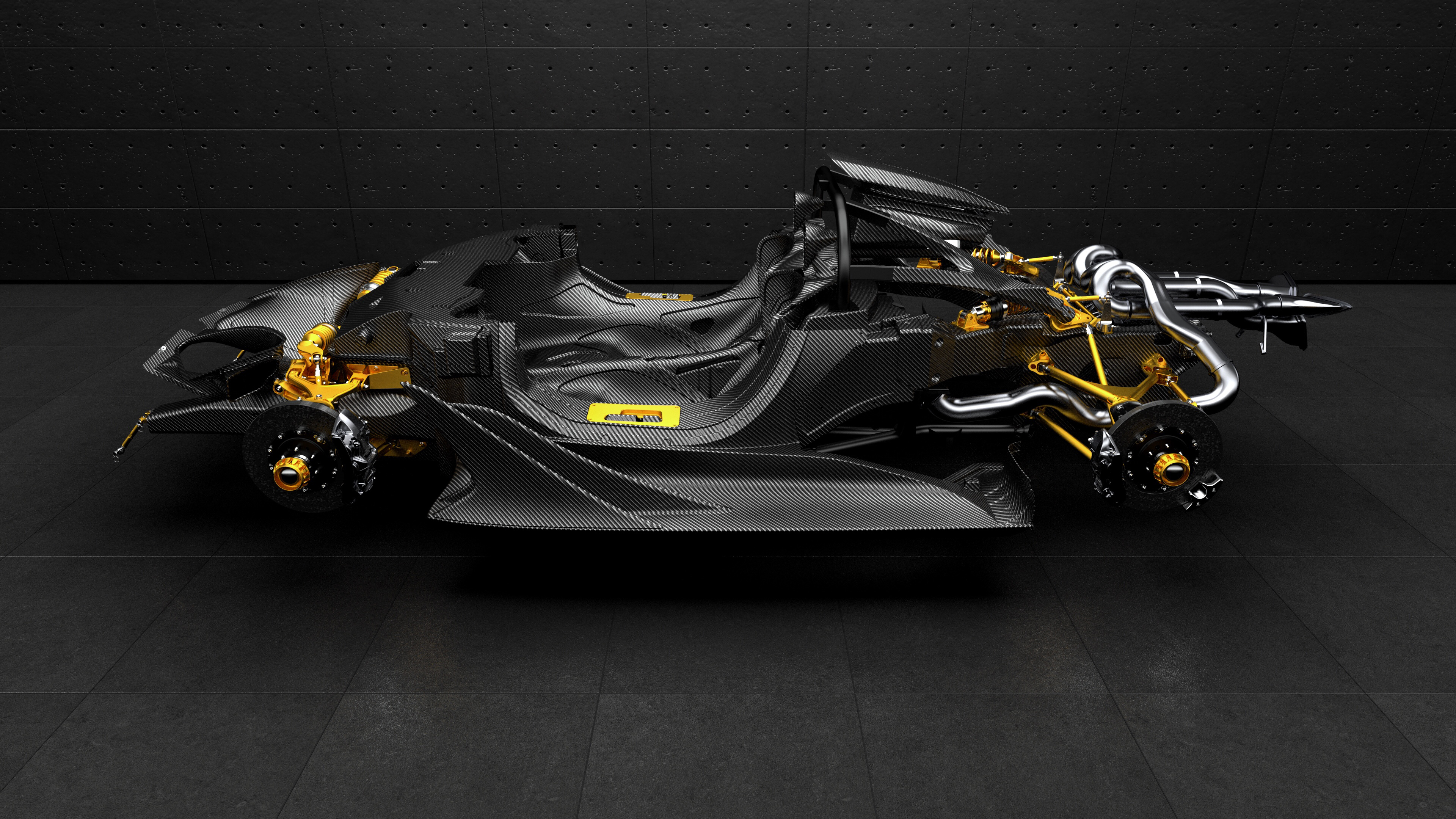 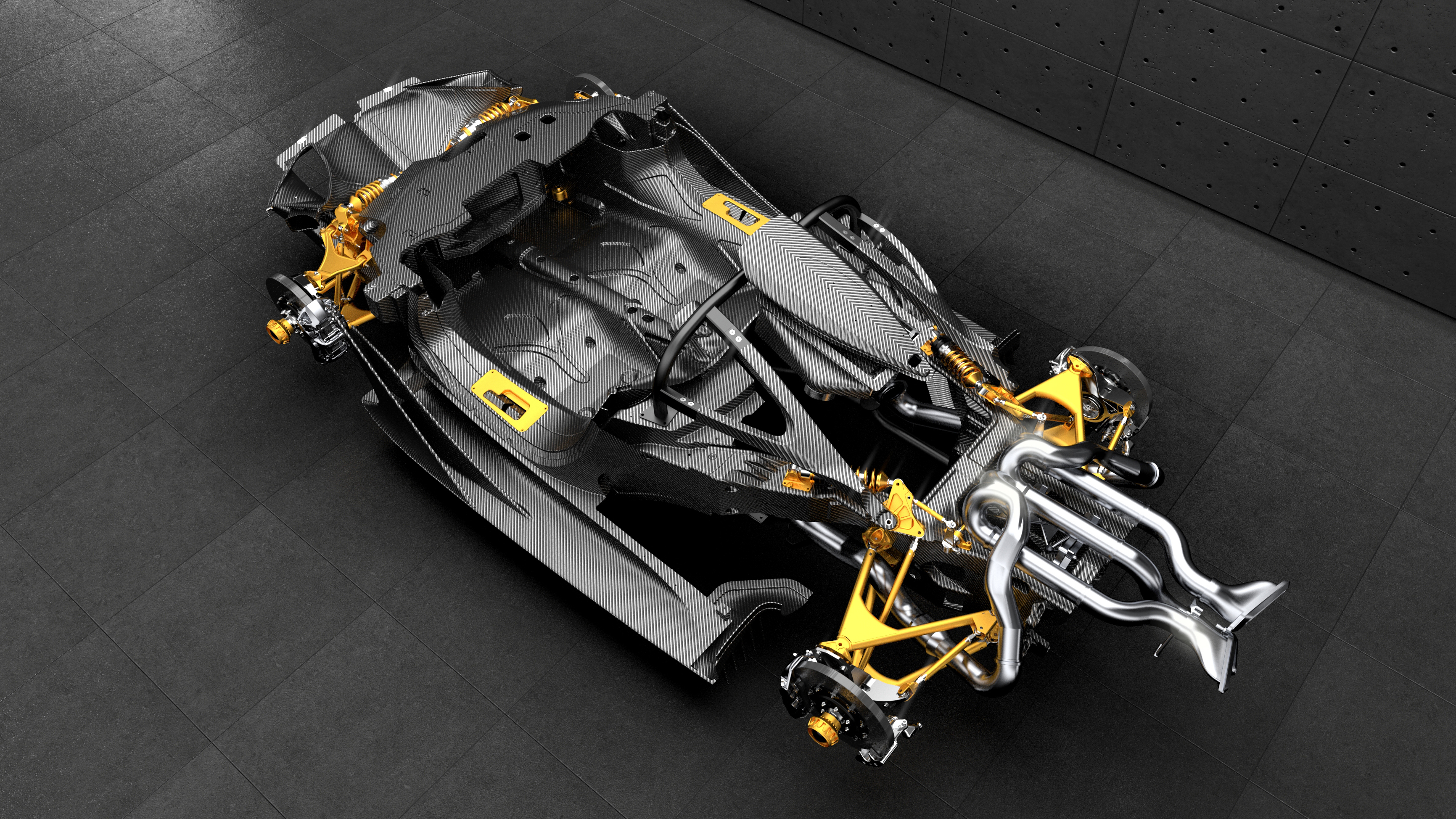 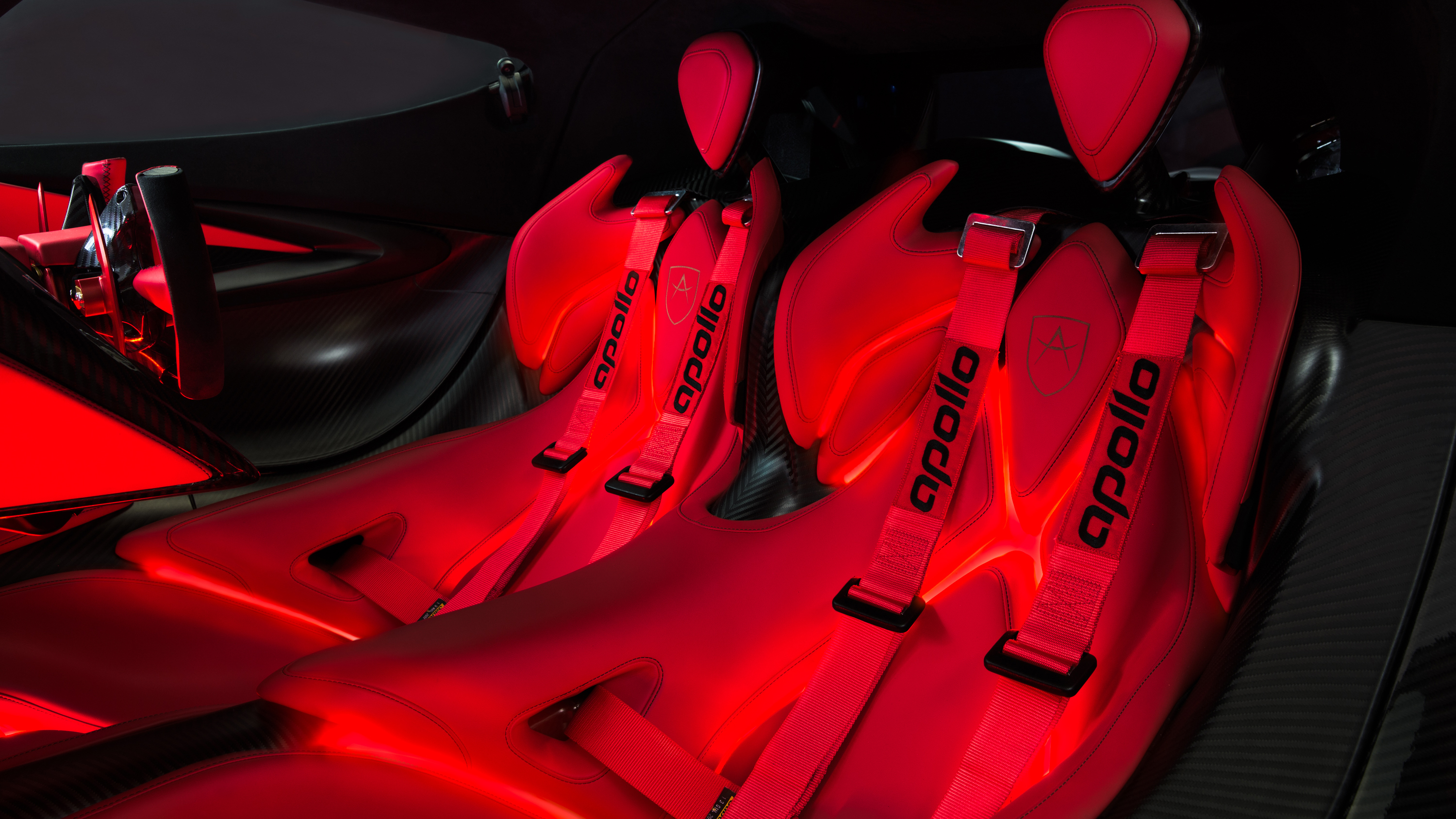 Thanks to a 9,000rpm redline and 560lb ft, Apollo claims 0-62mph in 2.7 seconds, and a top speed of 208mph. Healthy, but not outrageous in our twisted times. But Choi and his company protest the world is far too obsessed with raw, straightline speed (he wonders aloud about Hennessey’s 300mph ambitions more than once) and says his car isn’t supposed to chase the big speeds. It’s supposed to warp around racetracks making an enormous amount of noise instead.

Speaking of noise, the triplet exhaust is a 3D laser-printed item that costs, in Choi’s words, “more than a whole BMW M4”. The material attention to detail everywhere is pretty nuts actually – very Pagani-like in the obsession with lacquered, symmetrical carbon and anodized metal components. The engine compartment? Yeah, that's lined with heat-reflective gold leaf.

The pushrod suspension is fully adjustable. There’s a built-in airjack. The seats are cushions stuck directly to the carbon tub, and the button-covered steering wheel and pedal box adjust to meet the driver’s limbs. Just like LaOther Italian hypercar we’re not supposed to mention.

Apollo has rounded up a young team to create the IE. Norman Choi himself is just 45, but looks half that. His chief aerodynamicist, who sorted all the downforce using computational fluid dynamics and zero wind tunnel time, is 23. The chief designer is a 27-year old Brit.

Yet, other engineers involved with the oily bits are in their seventies. The IE is supposed to be a supercar that anyone across the generations can appreciate, whether you’re most into power, noise, handling, material science, or lap times. We’ll let you be the judge of that.

Once all ten, completely bespoke Apollo IEs are spoken for, the company intends to distill what it’s learned into a (slightly) cheaper, street-legal car, with the same enthusiast-pleasing, passion-before-performance philosophy. So, if you’ve never got on with the looks or noise of a Pagani Huayra, and Koenigseggs are a bit too fast for your liking, Apollo might have cornered a slice of the unobtanium market.

First, you’d better tell us if it provokes any, ahem, Intense Emotions…